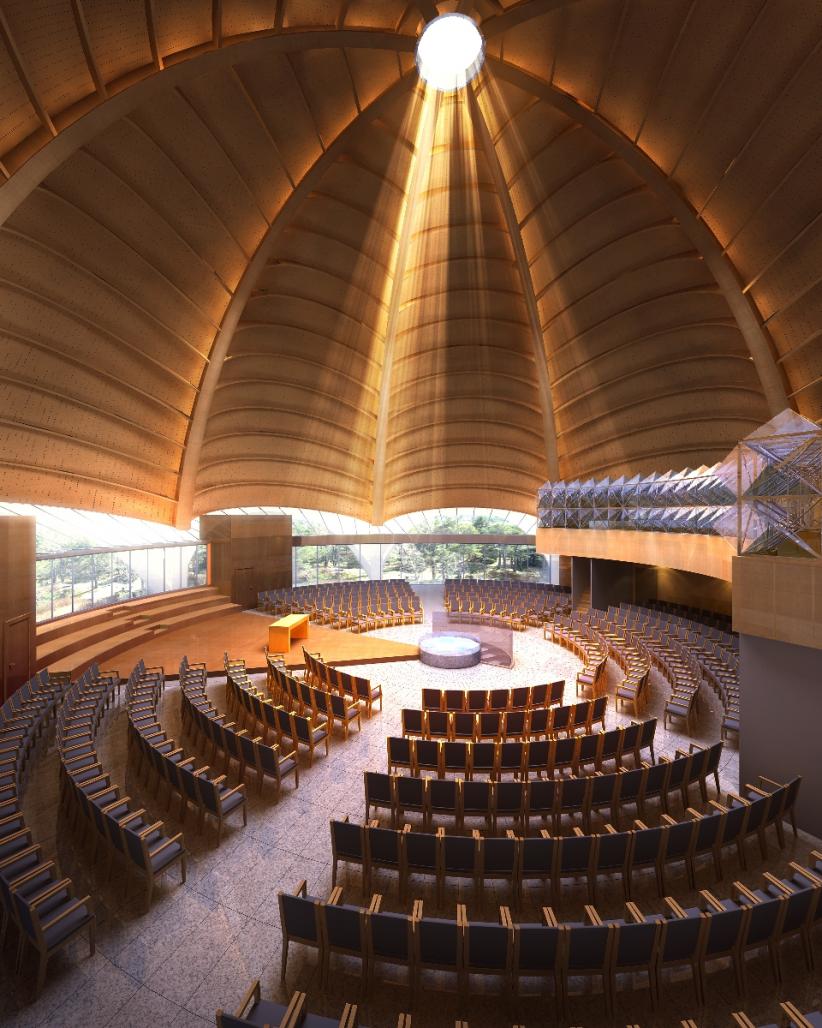 This project was a proposal for Hatlehol Church Competition Ålesund Norway: -

In the middle ages churches in the Nordic countries were often fenced by earth mounds with one opening where a “soul-gate” was placed – often with the bells mounted above. Inside the mound was a sanctuary and all communication was to be in peace. Weapons were banned and had to be placed on the outside of the mound.

This proposal uses the same arrangement to create a symbolic division where one leaves the stress and worries of everyday living outside the mound creating a peaceful meditative space for recuperation inside it. The access path leads from the parking areas hidden by earth mounds which also act as a noise barrier, through a naturally wooded terrain with landscaped niches where benches are placed.

On the Southside of the church this symbolism can be enforced by damming the natural runoff at the western boundary of the terrain, leading the water in a subterranean pipe to the inside of the earth-mound to create a mote on the Southside of the church. The earth-mound and the mote which is traversed by a bridge separate the two spaces - secular and sacral. Beneath the bridge the water flows over the edge of an open pipe to be lead back again to the natural runoff, further down on the western boundary.

Inside the church, the baptismal basin occupies the centre space. The basin is a glass cylinder extending right through to the sub-floor, but with a perforated glass barrier at the height of the main floor. Straight above it, at the apex the dome is capped by a lence formed glass which breaks the sunlight from any angle-inclination and directs it down on to the baptismal basin. From here it is reflected as light waves onto the inside of the wave-vaulted dome, calming the soul and inducing a meditative mood. The baptismal font is also lit from the bottom up to create the same effect when needed.

On the lower floor the glass cylinder becomes a light source for the introverted spaces in addition to direct light sources from above, along the periphery of the wall and through glass-bricked floor areas.

A children’s area is created as a mesa nine floor over the main entrance area, separated from the main room by a glassed stainless steel frame, where 25% of the glass (for example all north facing sheets in the long wall and all east facing glass sheets in the shorter walls and roof) are intended to be stained glass while the rest is clear glass.

Above the choir which is situated on steps to the back of the ”altar floor”, a stained glass sheet is suspended at an angle appropriate to broadcast the sound over the congregation and also in a position where it is visible by the congregation. A feature of this artwork has to be a central panel of a frosted appearance, where information (for example no. of psalms etc.) is digitally displayed.

The perimeter of the main floor is for the most part pivoted clear glass panel doors, drawing the outside area inn and allowing Creation itself, the surrounding mountains and trees to frame the space while the earth-mound hides any manmade objects.

The Churches Primary construction is of curved laminated timber beams as shown, skinned on the outside with "flexi ply" and a fibreglass waterproofing finished with shingles as an exterior appearance. On the inside the skin is acoustic plywood panels with insulation filling the gap between the outside and inside skins.