Fears proposal to turn building into flats, offices and a hotel will rip heart out of industrial landmark that tells story of city's rise 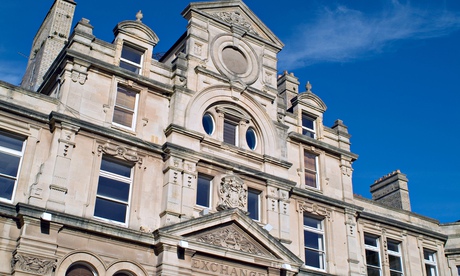 In the final years of the 19th century when the black gold of the Welsh valleys was one of the most valuable commodities in the world, the CoalExchange in Cardiff was a hive of activity, a frenetic place where deals were struck and fortunes made.

Now the future of the crumbling yet elegant building is unclear with conservationists alarmed that a scheme to turn it into flats, offices and a hotel could rip the heart out of the industrial landmark.

Conservation engineer Jon Avent, whose office is next door to the building in the Cardiff Bay area, has organised petitions signed by 3,000 people calling for an inquiry into the future of the grade II* listed structure. "This building tells the tale of Wales's magnificent industrial past," he said. "It's where the world's first million-pound deal was struck. It's hugely important and much loved."

In evidence to the Welsh assembly's petitions committee, Avent said the Labour-controlled council favoured gutting much of the building, which is owned by a development company. He also suggested the council was exaggerating the building's state of disrepair, allowing it to use emergency powers to push forward its preferred plans for the scheme without full scrutiny. "So much of Cardiff Bay's social and built heritage has already been destroyed," said Avent. "It seems inconceivable that more can be cast aside with cynical abandon."Built in the 1880s in Mount Stuart Square, it is estimated that up to 9,000 people passed through the exchange daily to buy and sell. The building played a crucial role in the development of Cardiff from a modest fishing port to a capital city.

The exchange closed after the second world war as the coal industry began its painful decline and in more recent years was revived as a music venue, hosting bands including the Arctic Monkeys and the Manic Street Preachers, before closing down again.Nerys Lloyd-Pierce, the chair of the Cardiff Civic Society, who often attended concerts at the exchange, said she loved the interior, which includes wood panelling, a splendid oak balcony and Corinthian columns. "It is beautiful," said Lloyd-Pierce. "All oak panelling and stained glass windows. It would be terrible to lose all that."

Lloyd-Pierce argued that a more fundamental problem was that the regeneration of Cardiff Bay had focused on the modern waterfront development while its historic core, including buildings such as the exchange, was ignored.

She recalled attending a Patti Smith concert in which the American singer had noticed the neglect of the great old buildings. "Patti told the audience: 'Don't let the corporate men destroy your city.' I'm worried that is just what they are doing."The Victorian Society said the Coal Exchange needed "sympathetic repair" rather than "demolition and redevelopment".

James Hughes, conservation adviser for the society, said: "We are very alarmed at the suggestion that partial demolition is being considered. We urge the council to carry out a thorough heritage assessment of this great building and work with all interested parties to restore it to its former glory."

The Welsh assembly's petitions committee has agreed to write to the city council to ask it what the plans are for the Coal Exchange and to question it over its use of powers under section 78 of the Building Act on emergency measures for dangerous buildings.

Cardiff council said it was right to use the emergency powers, adding that it believed the building could be an anchor development for the next phase of the development of the Bay area.

A spokesman said: "The council doesn't own the Coal Exchange and never has. We have acted in the interests of public safety and incurred a cost of £900,000, which includes putting up scaffolding to hold up part of the structure. The council, as a planning authority, will have to consider any application from the owner by reference to material planning matters. A memorandum of understanding is being developed with the owner which will give the opportunity to offer support for the future of the building."The building's owners, GYG Exchange, said it was in discussion with its bank about the future of the exchange. Director David Walters said the company's plan was to preserve as much of the building as it could – the historic oak panelled trading hall, for example, was considered sacrosanct.

Walters said the development was expected to include flats, offices, a hotel, possibly cafes and some sort of public space. He was aware of the concerns and added: "It's a fantastic building. We love it and want to preserve as much as we can."