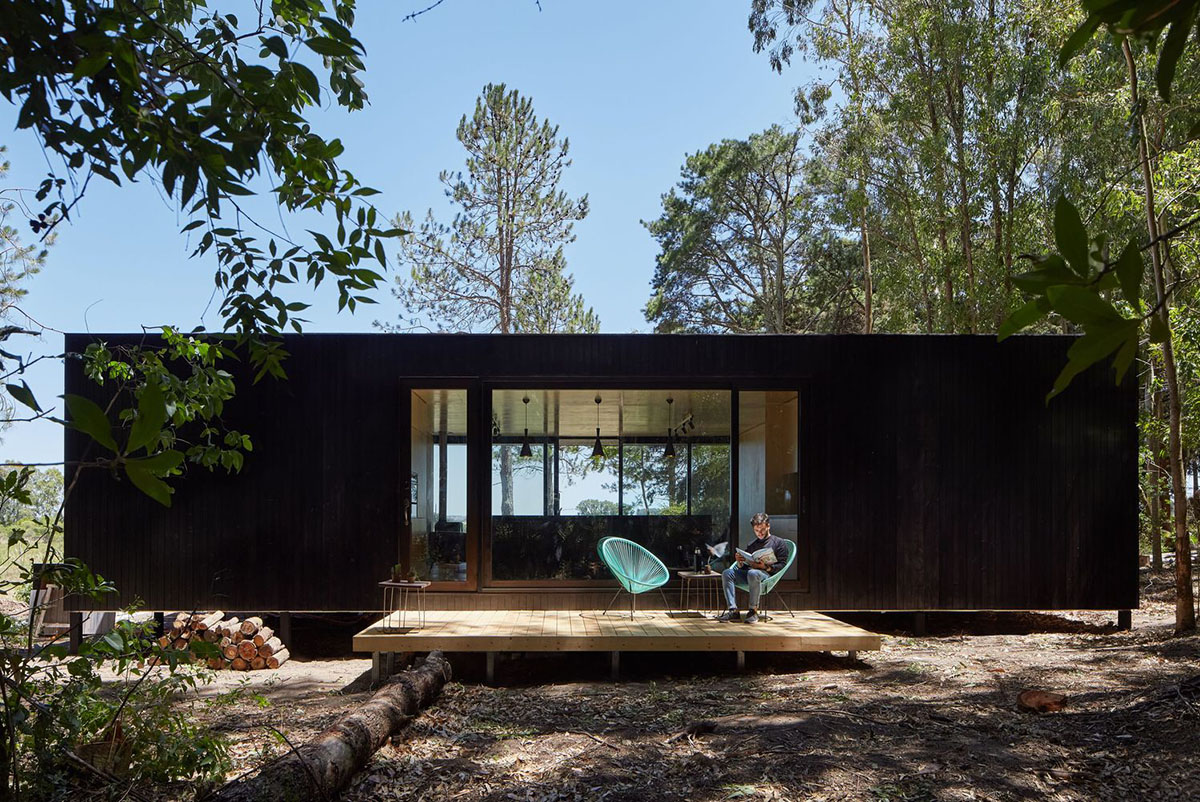 The cabin, named ZGZ House, is a moveable and transportable cabin for whom want to escape from the city's busy life to remote places.

Covering a total of 108-square-metre, the cabin is surrounded by native forest but also very close to the small urbanization of Blancarena, one of the most beautiful resorts along the coastline of Colonia in Uruguay. 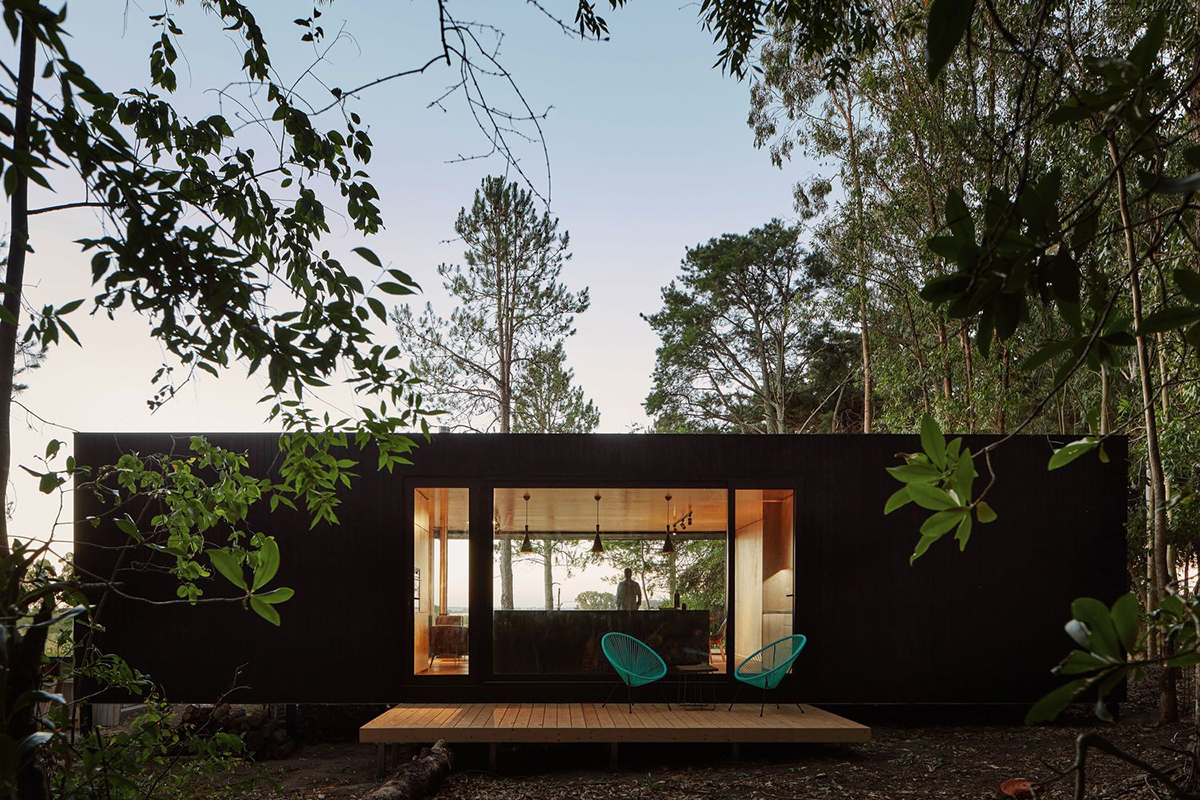 The cabin is located between these diffuse suburban and rugged limits is that this house is developed. Designed as a temporary holiday home, it is conceived as a refuge for a resting place when the owner is visiting the country. The project brief was to create an escape home that could be cozy, practical and modern - as are the small typical wooden cabins of the hemisphere where it resides, but in a contemporary enclave that can also withstand the vertiginousness of modern life and contemplate all the comforts of it, as well as rational use of resources trying to minimize the environmental impact.

Situated in an area of countryside characteristic of the territory, the cabin has a simple layout, but it entirely frames the nature to rest and relax. 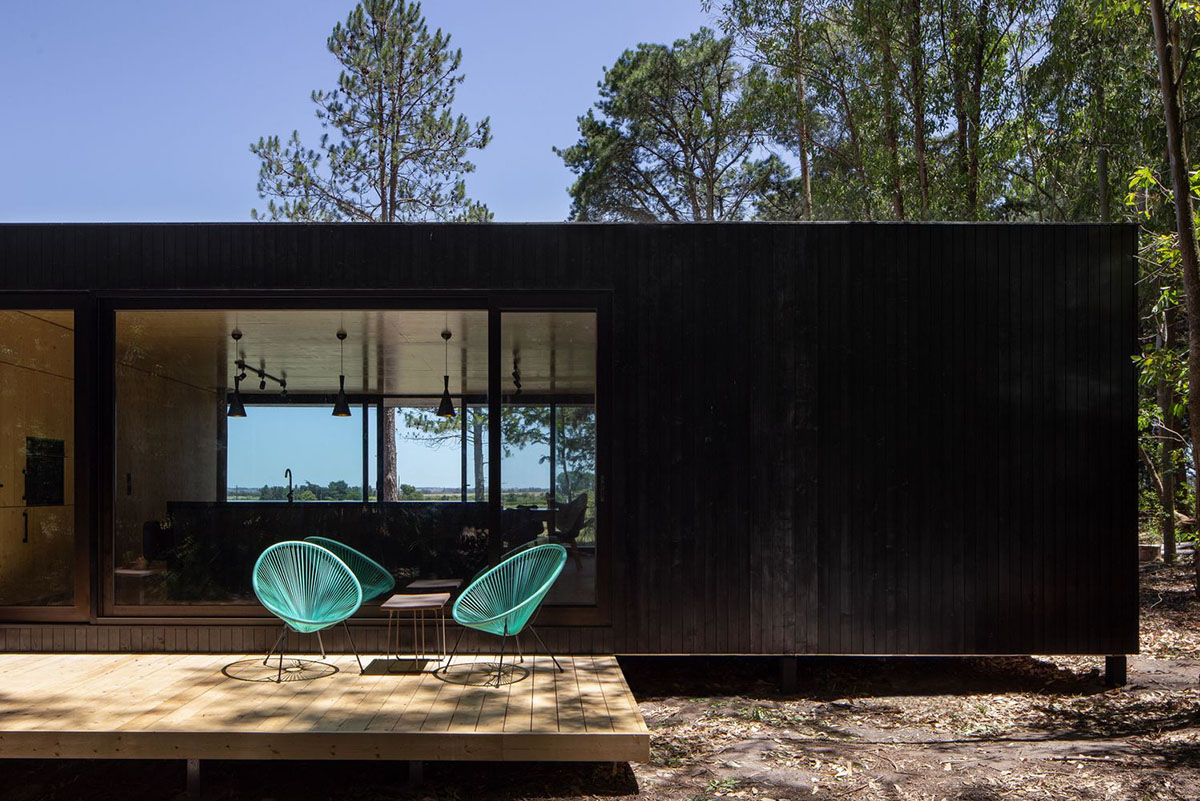 Built with on-site construction method, in places with such a strong natural and rugged connotation, the cabin brings with it a myriad of economic and logistical challenges that are not typical of an efficient contemporary solution, as well as being highly hostile to the environment, as the studio explains.

In construction process, iHouse estudio carried out the detailed work in its iHouse production plant, with a controlled work process in an environment isolated from climatic factors. 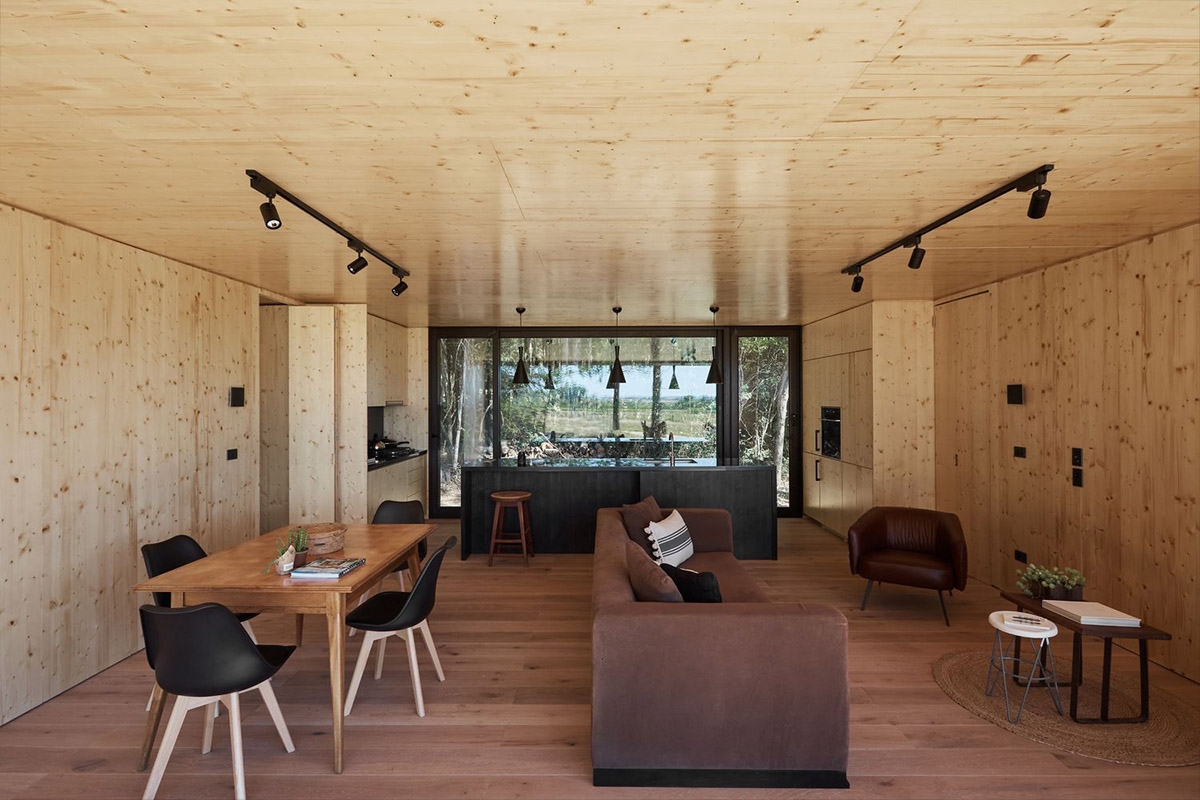 Having all the necessary equipment to work and carry out the tasks, the studio aimed to build the cabin in the most optimal way possible in the best conditions, with the proximity of suppliers and with permanent quality control in the work by the technicians, since the architecture studio is located within the production plant.

"All these factors make the construction process a much more efficient task, which is translated into the finished work," said iHouse estudio. 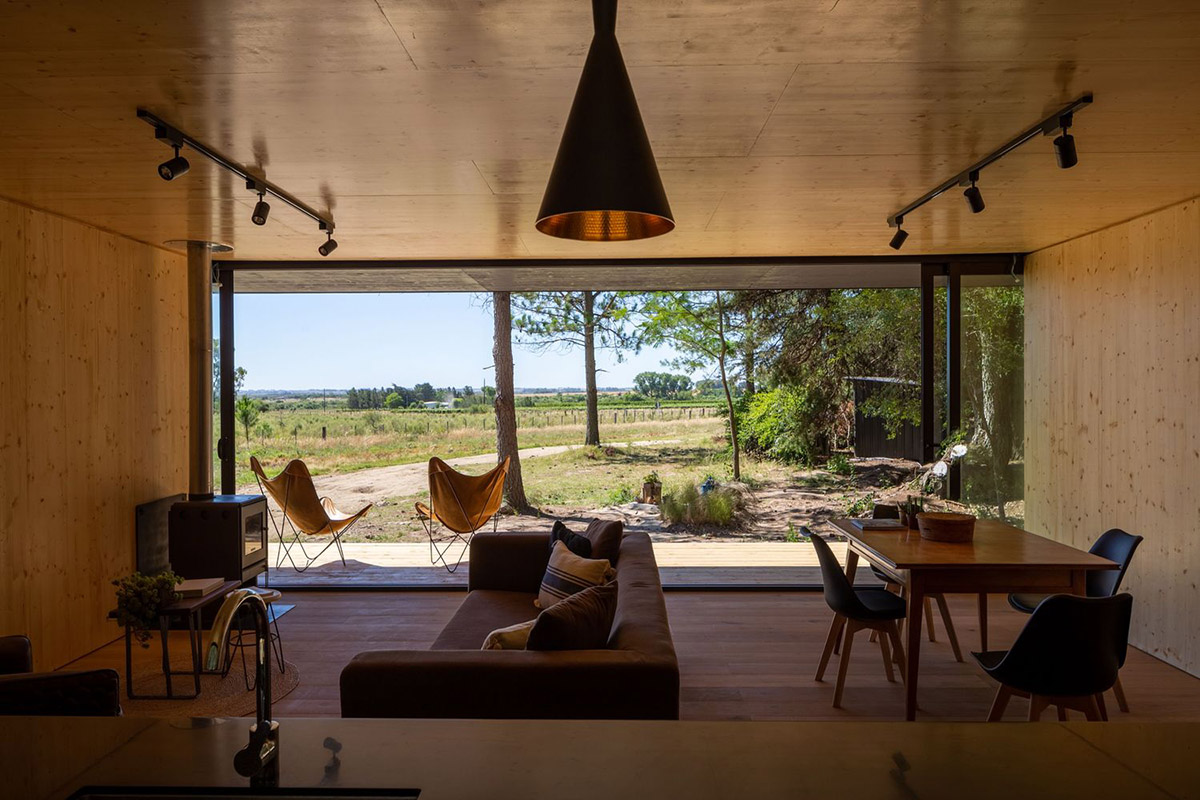 The cabin is composed of two modules that are joined by their longest side, which make up the house. The first module comprises all wet spaces, such as bathrooms, and kitchen, while the other module houses the bedrooms and common spaces such as the living and dining room.

The modules were then transported to the site where their final installation was made. 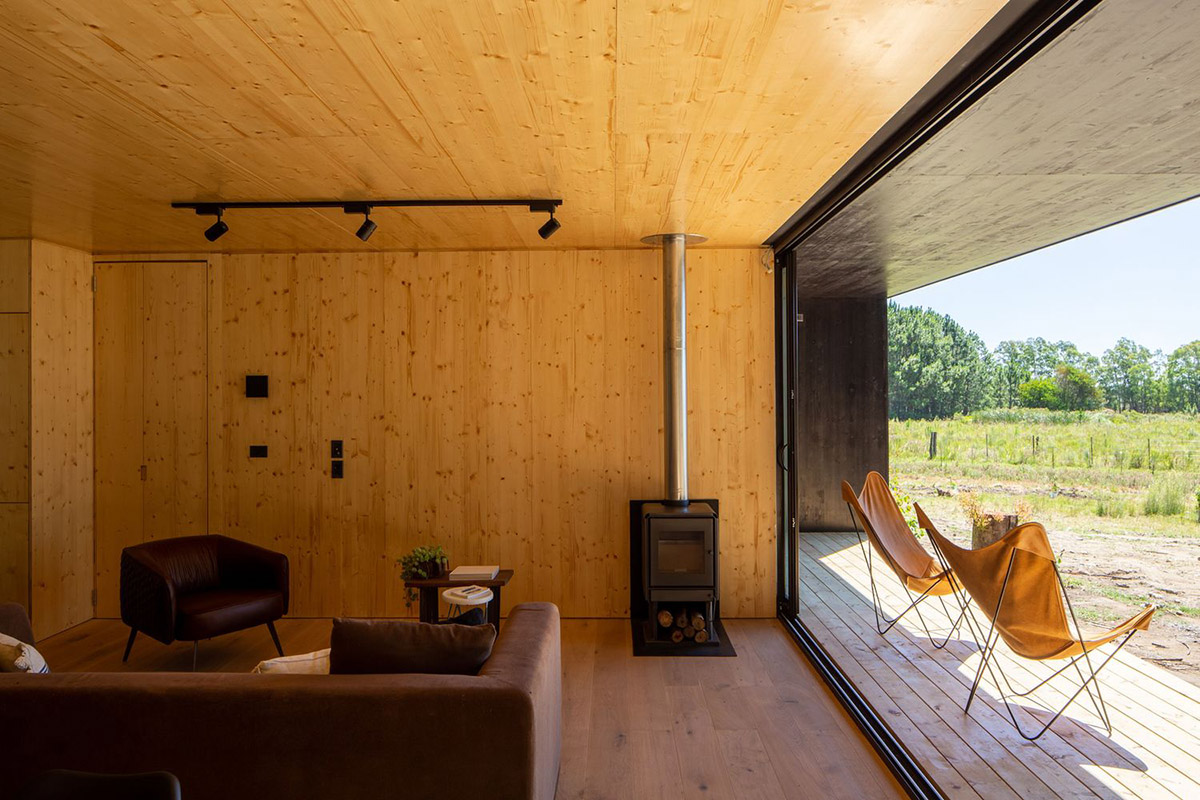 "The house is positioned as a pure volumetry that does not seek to blend in with the surrounding nature or compete with it but stands out as an external and artificial element that coexists in harmony with a space alien to its language," added the firm. 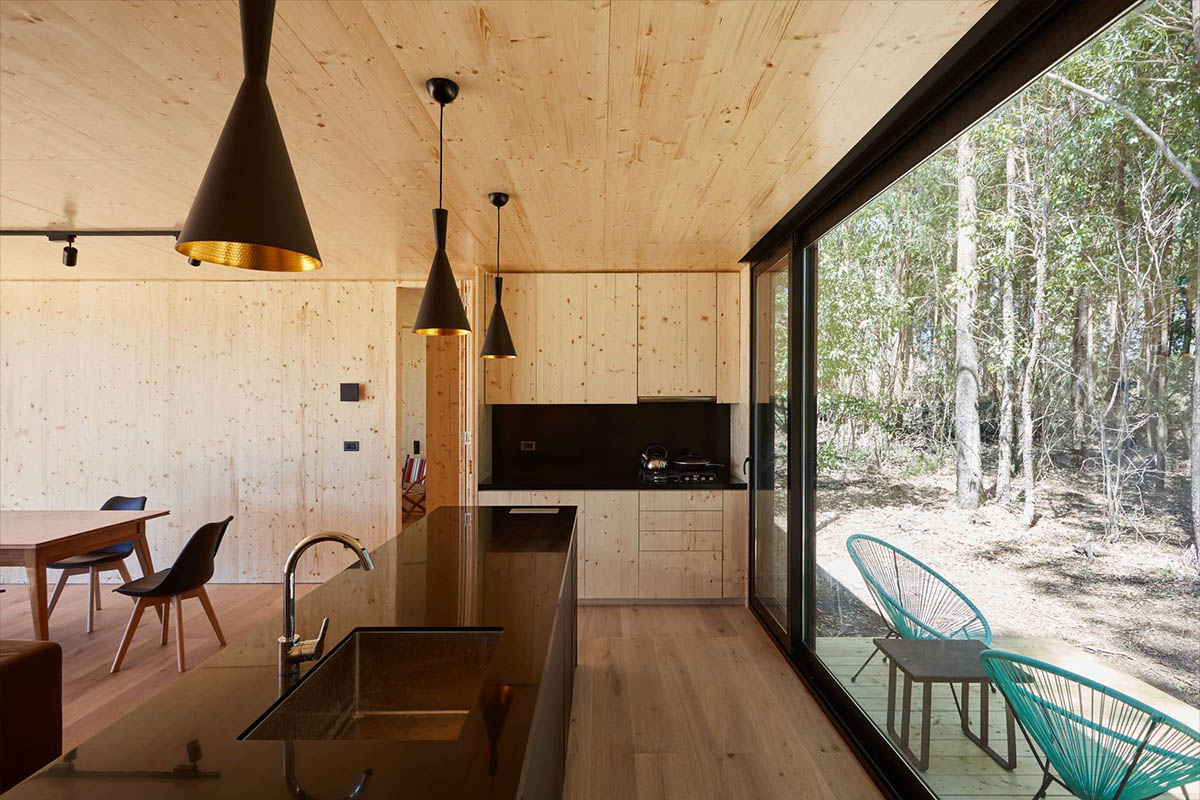 Inside, the cabin is clad by wooden panels for the floor and ceiling. "Its typology is organized programmatically in two clearly marked axes, in a sense it locates the private areas on the sides of the house and the spaces related to the environment, thus making the circulatory space almost zero, making the most of the meters built," continued the studio. 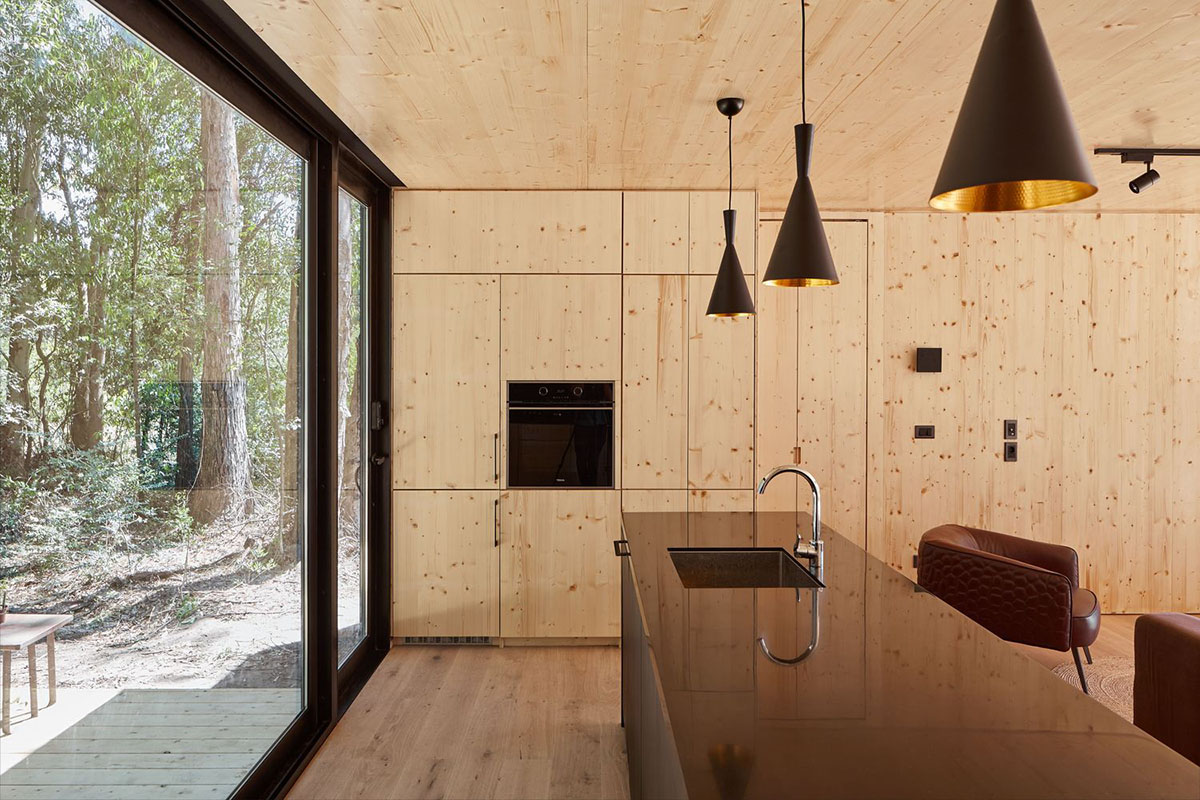 On the other axis, they placed service spaces that nourish these named spaces, on each side, there is a bathroom and in the center the open kitchen that is projected to the rest of the social area of the house.

The fully glazed main facade with a large gallery allows the total opening of each of the areas of the house, thus virtually expanding its area towards nature. 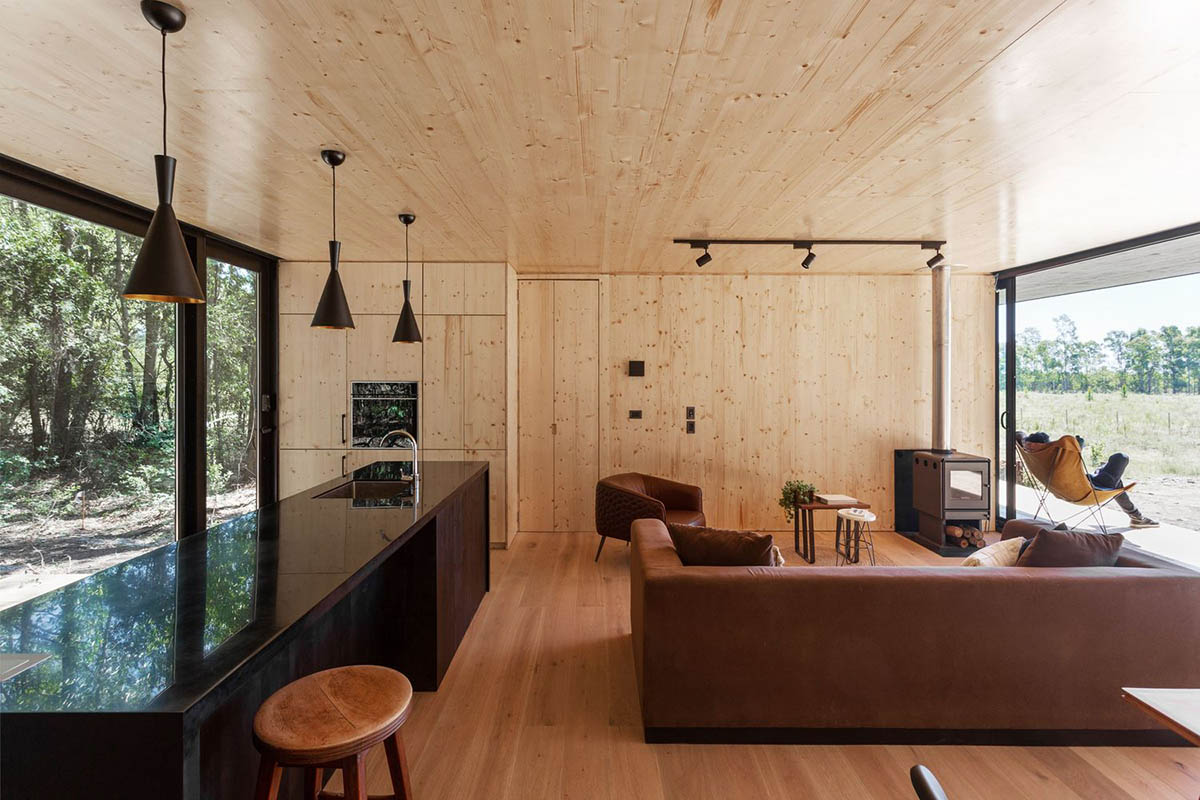 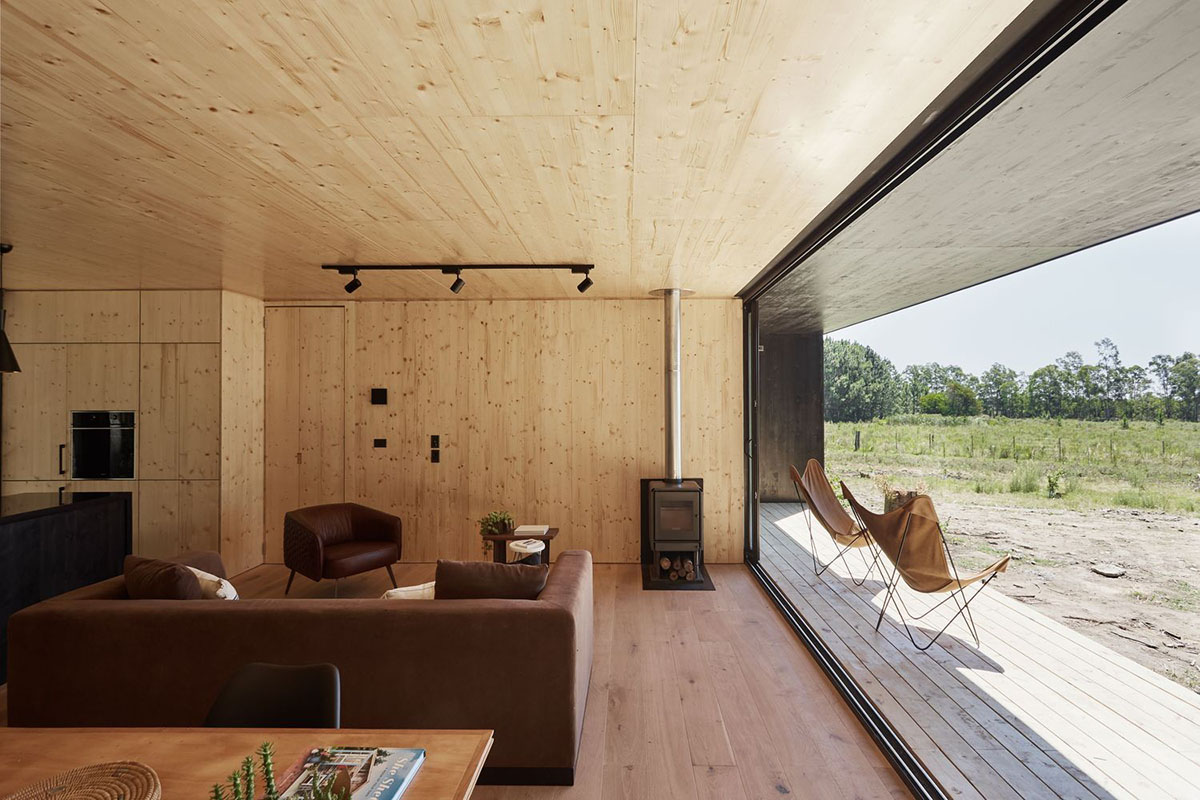 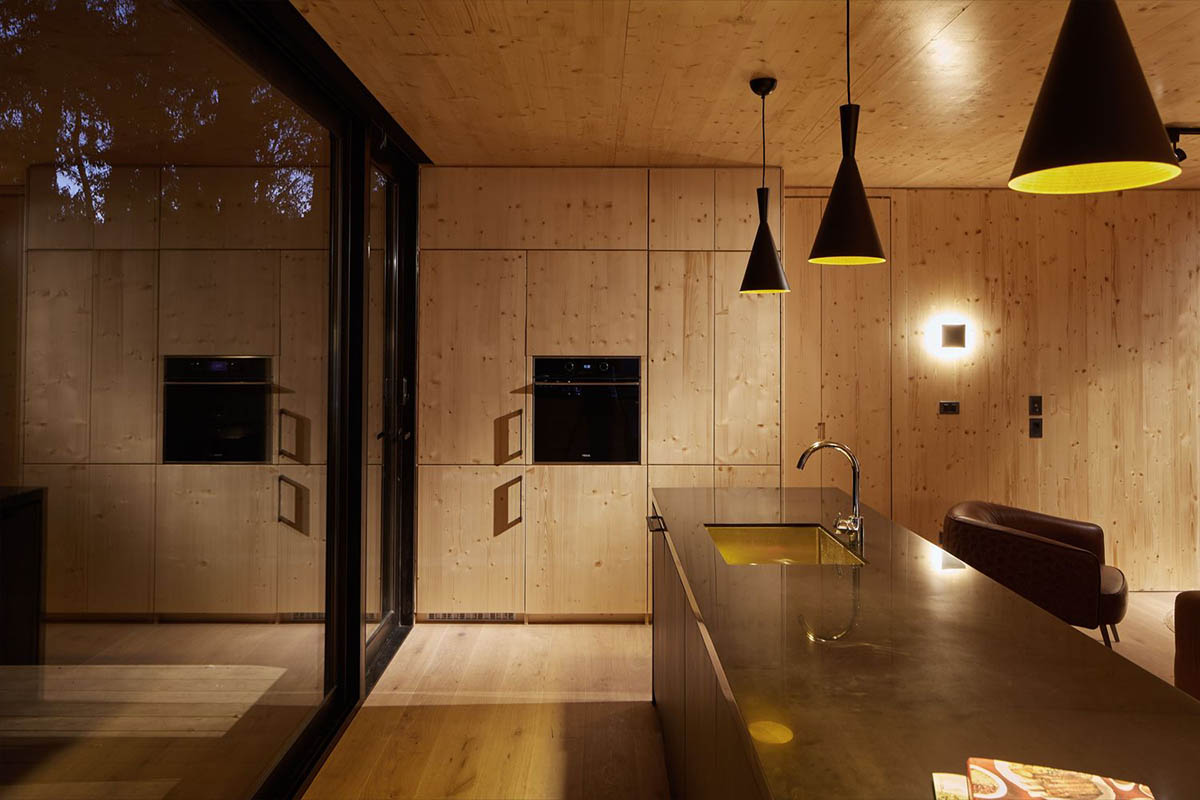 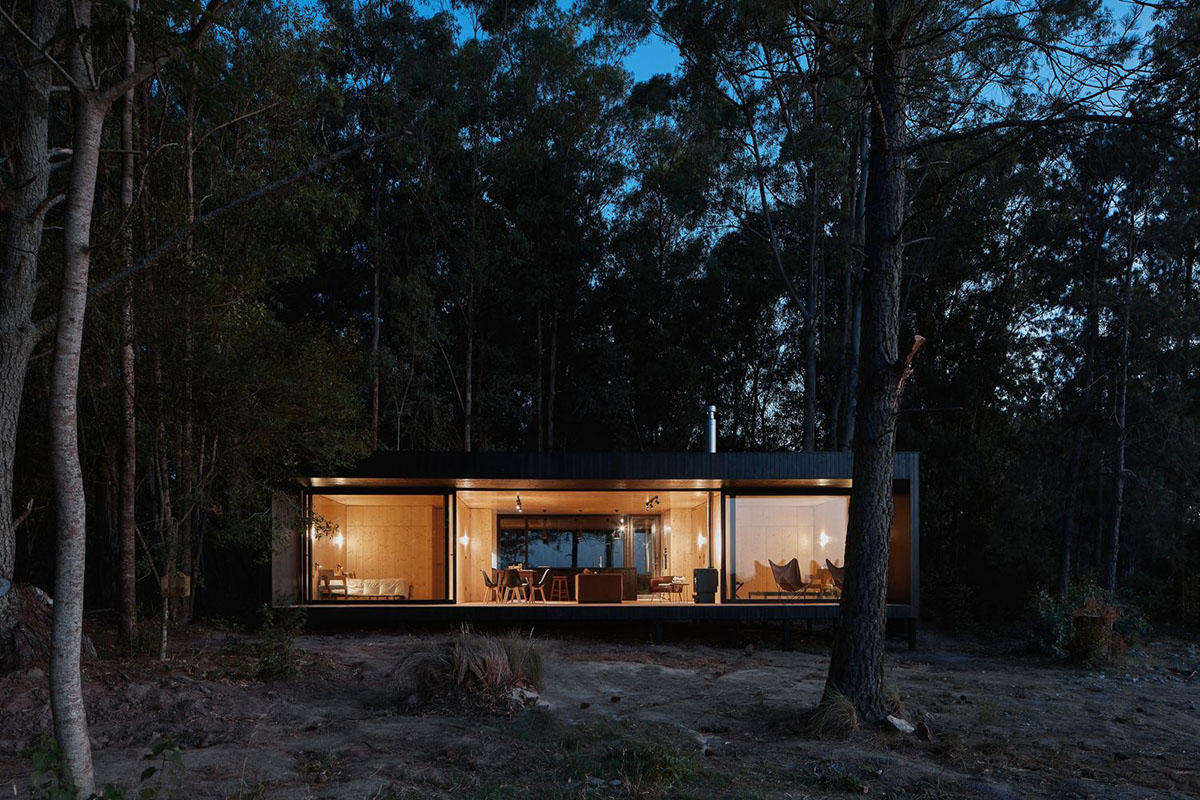 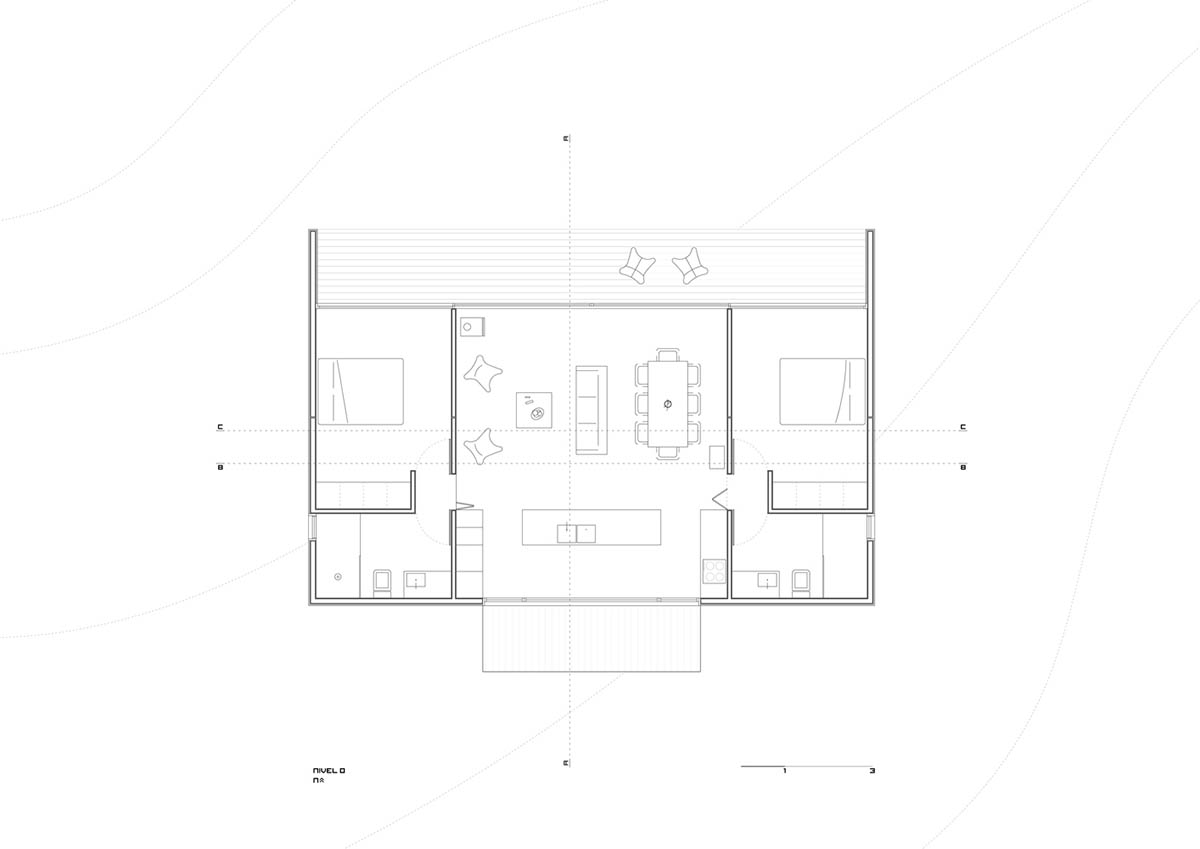 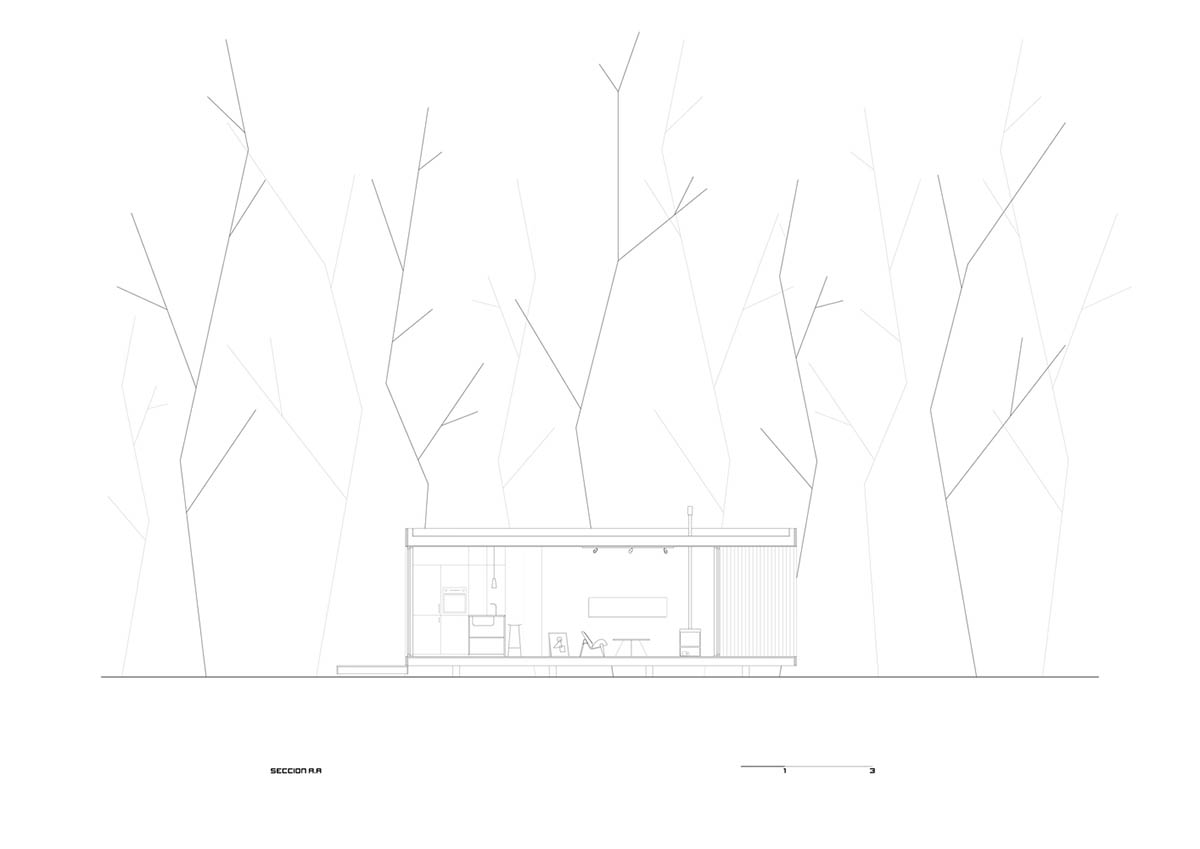 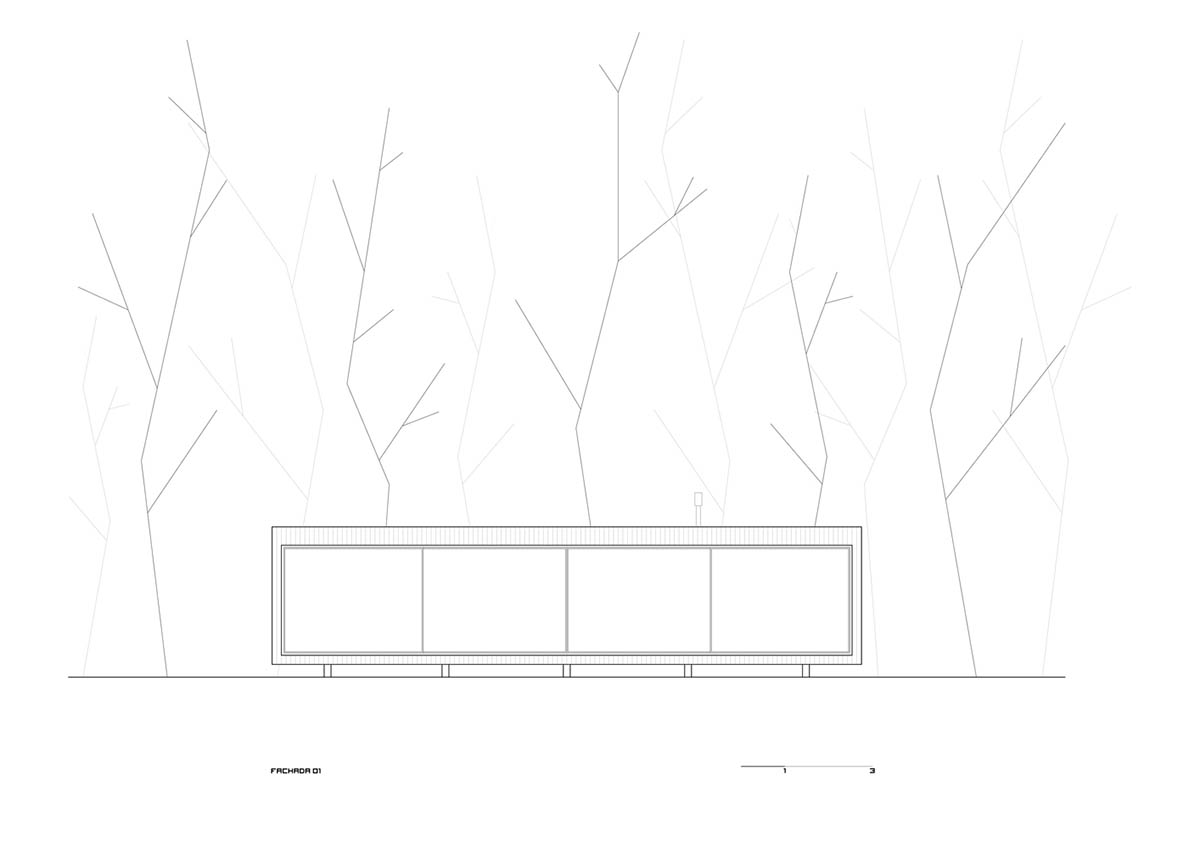 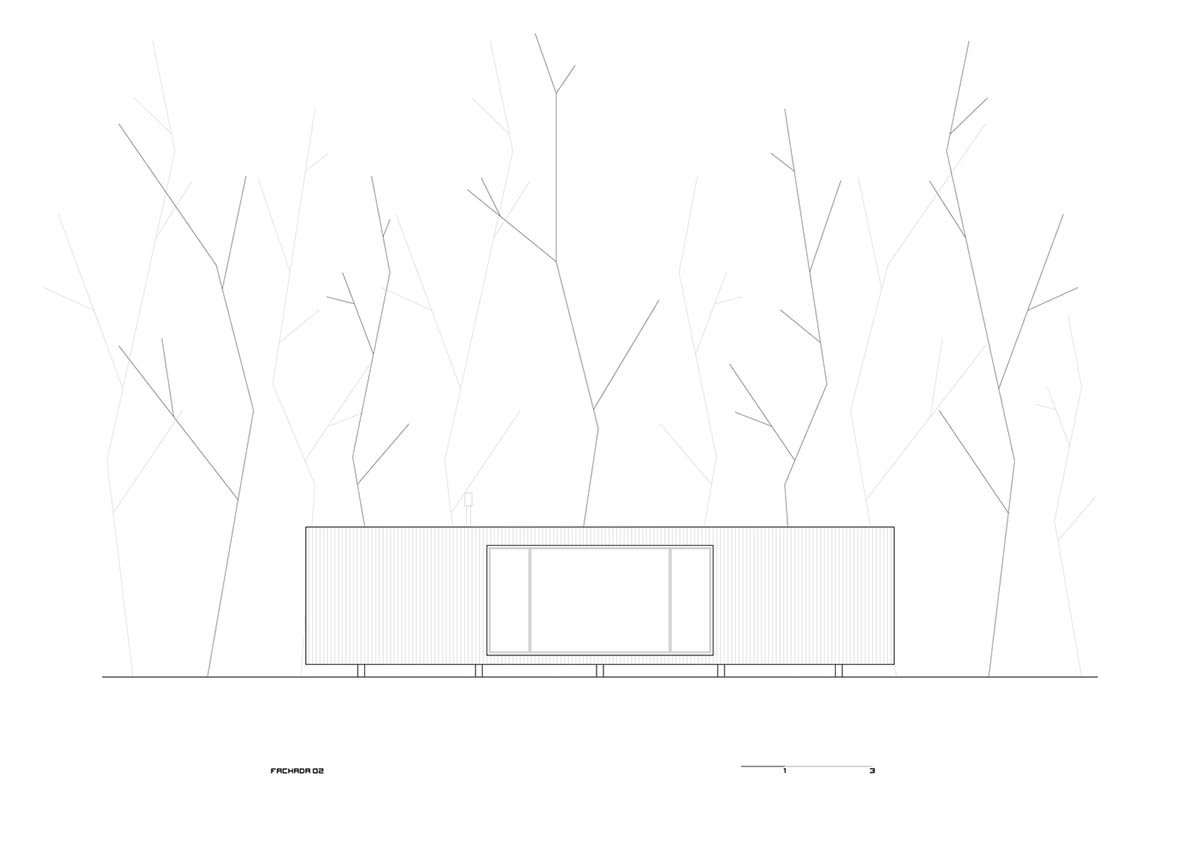