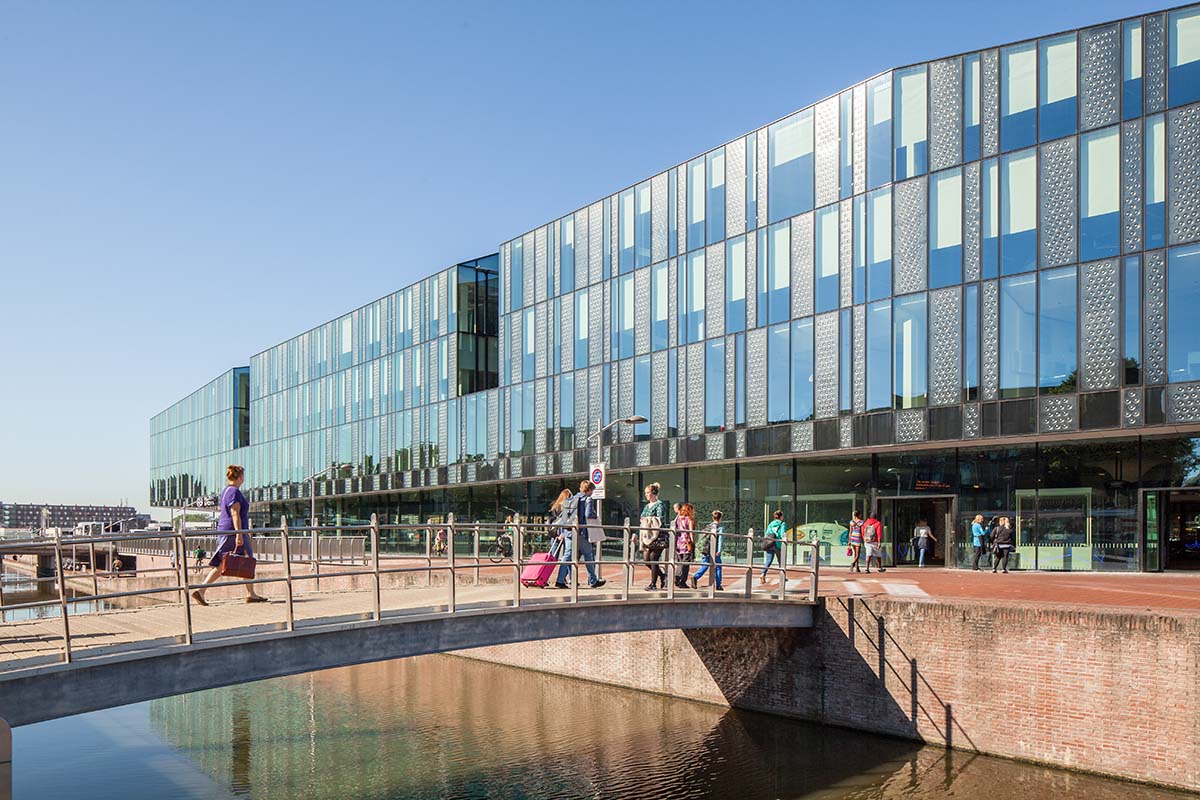 Mecanoo has completed the Delft City Hall and Train Station in the Delft, Netherlands, which combines the past and future city layers on the same project. From the outset, Mecanoo’s idea was to design a station that makes it clear to visitors that they have arrived in Delft.

The new station, in combination with the new city hall, sits atop a new train tunnel built in place of the old concrete viaduct that divided the city in two since 1965. Coming up the escalators, the impressive ceiling with the historic map of Delft unfolds. When visitors look outside, they see the city and the old station as a contemporary version of Johannes Vermeer’s painting 'View of Delft’. 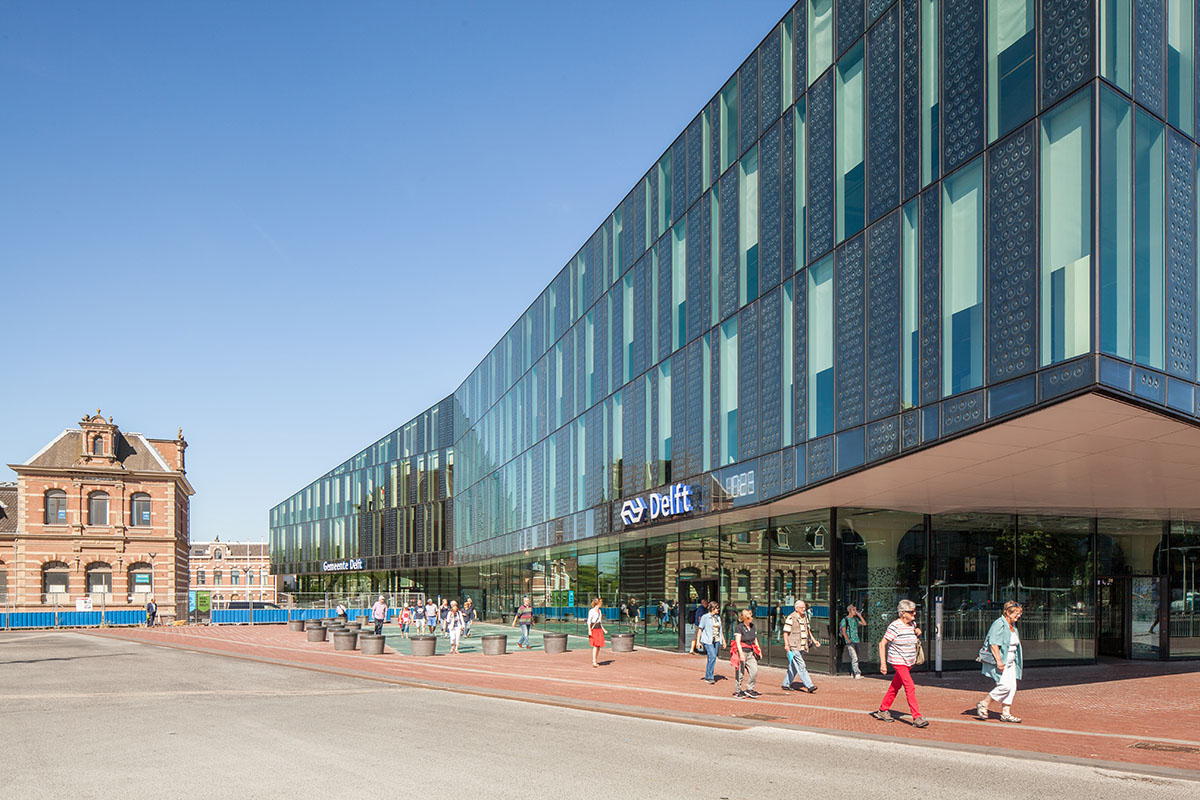 Mecanoo wanted to interweave past and future on the same project. "The city of Delft reflects its past: the multitude of historic buildings and canals; the ‘Prinsenstad’ city, closely connected to the Dutch Royal Family; and, of course, the world famous Delftware ceramic factories," said the firm.

"On the other hand, the Delft University of Technology is at the forefront of technical innovation. The character of Delft, epitomised in this combination of past and future, was the starting point for the design." 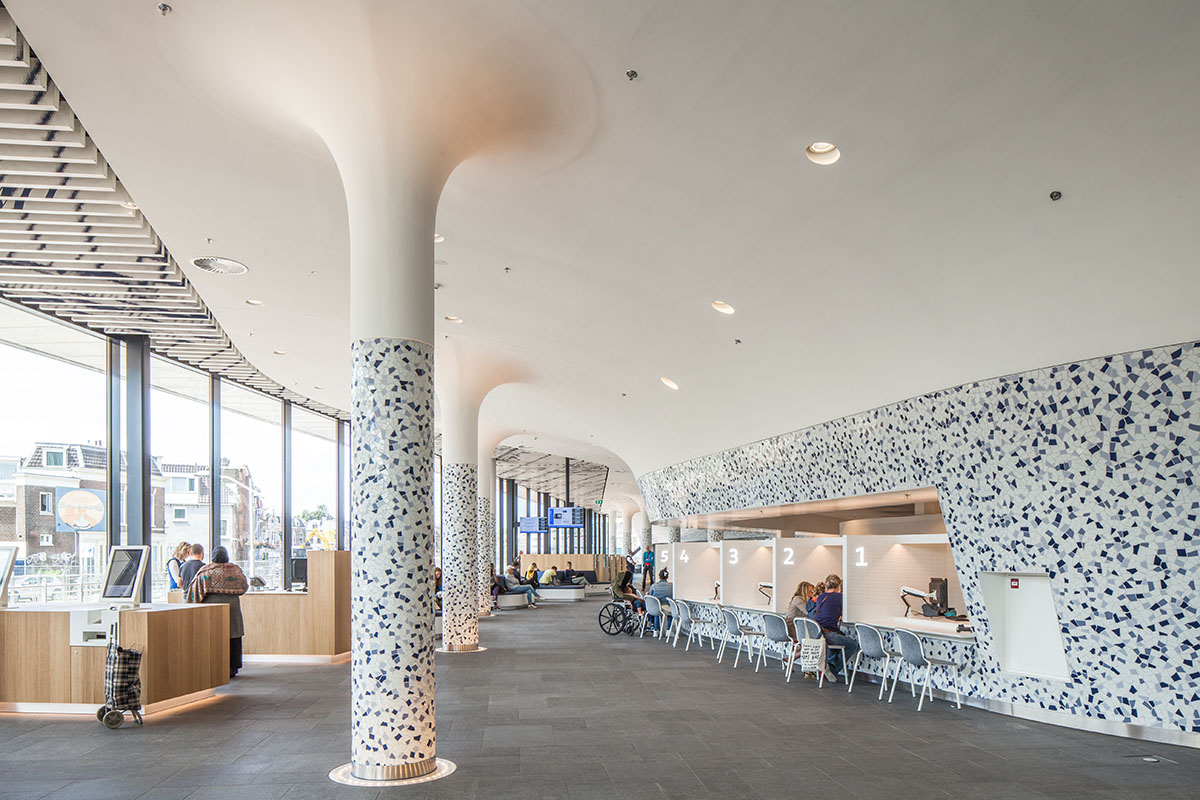 A vaulted ceiling features an enormous historic 1877 map of Delft and its surroundings, connecting the station with the city hall. Within the station hall, walls and columns are adorned with a contemporary re-interpretation of Delft Blue tiles.You can walk directly from the station into the city hall. 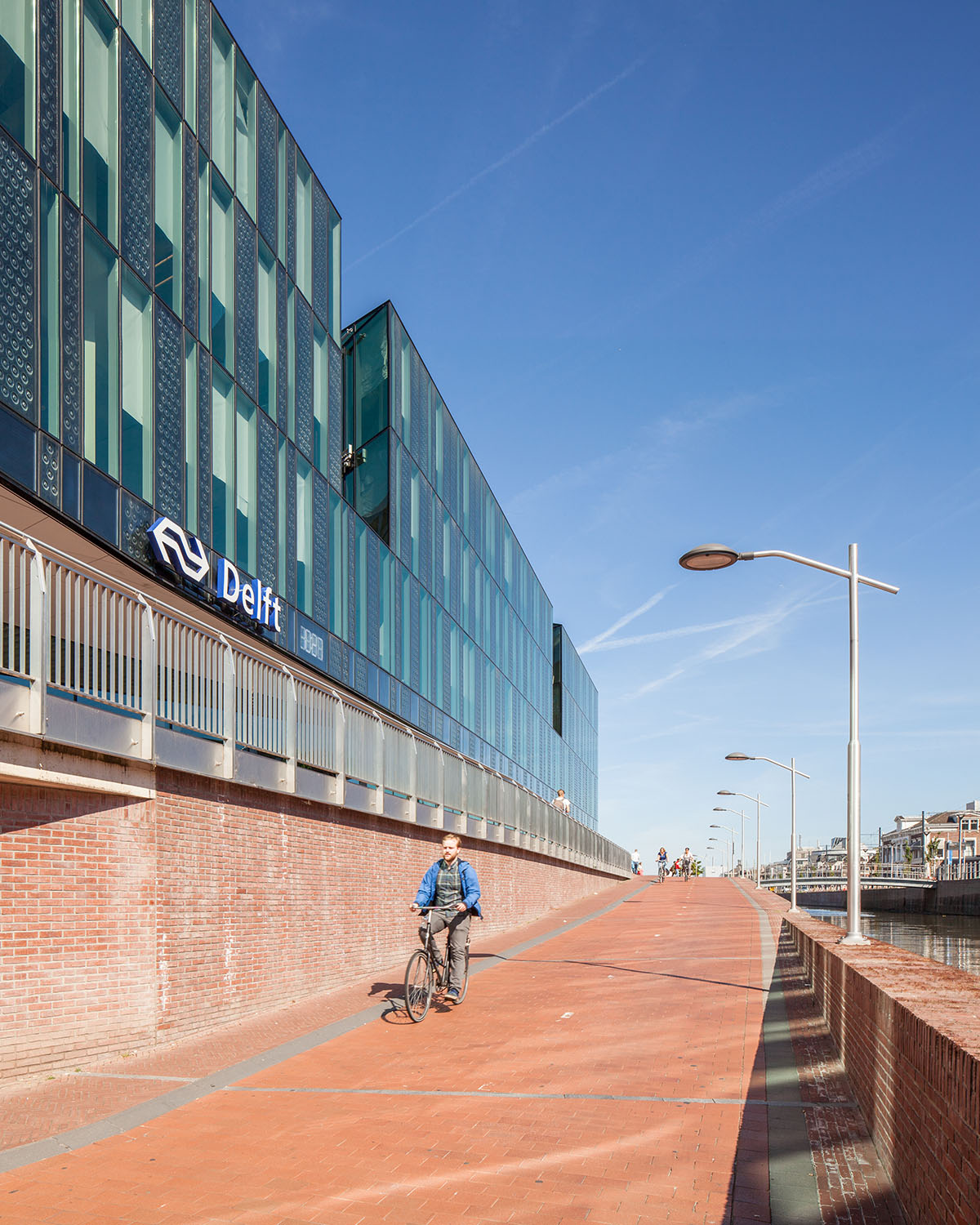 The glass skin of the building is designed to reflect the Dutch skies. The panels of fused glass with lens-like spheres reference a vernacular window design that can be seen throughout the historic city. The combination and rhythm of open panels of high performance glass and closed fused glass panels enable a high degree of energy efficiency.

Trying to create as a contextually compact building, throughout the design process the building volume has been shaved and reformed to create a compact, highly efficient building form. The lowered roof lines at the corners provide a gradual transition towards the existing small-scale development of the Delft city centre and the adjacent Wester Quarter. 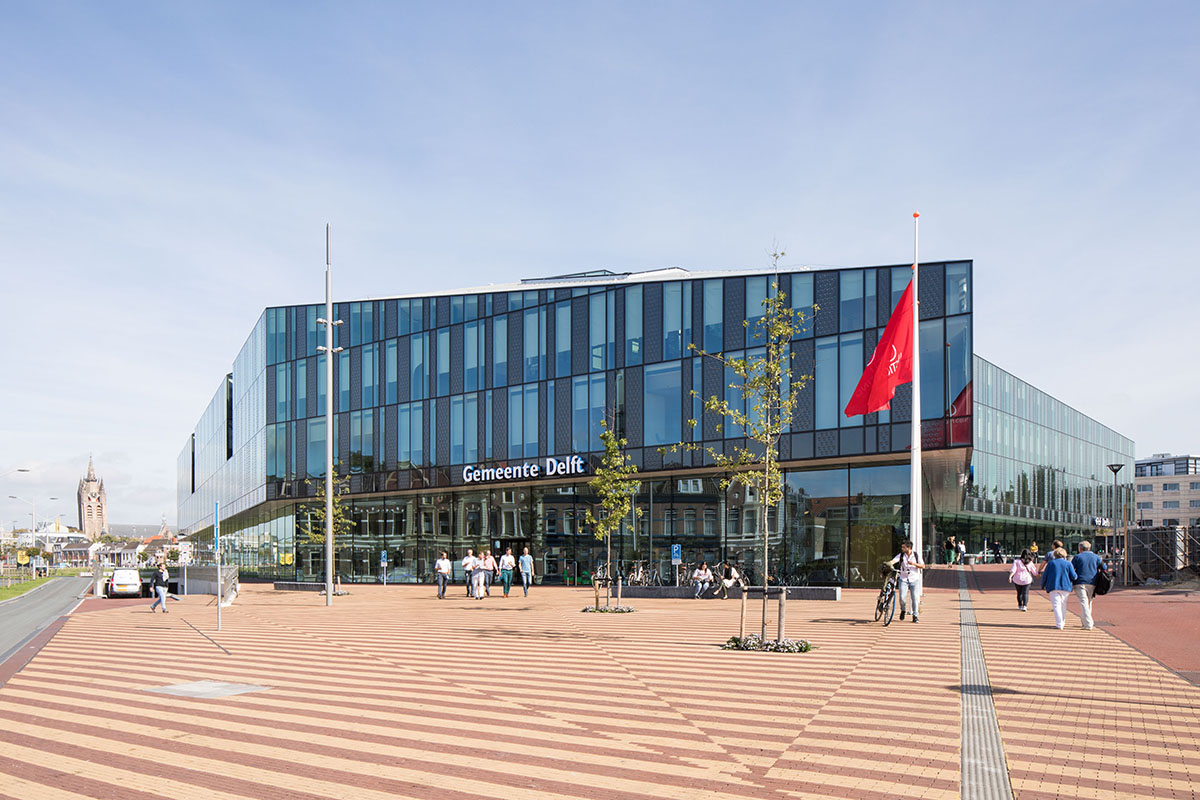 The building connects the historic inner city on the east side of the railway tunnel with the residential neighbourhoods located to the west, realigning the centre of Delft. Incisions in the glass volume of the city hall building form a pattern of alleyways and courtyards, which are themselves inspired by the intricate structure of Delft. 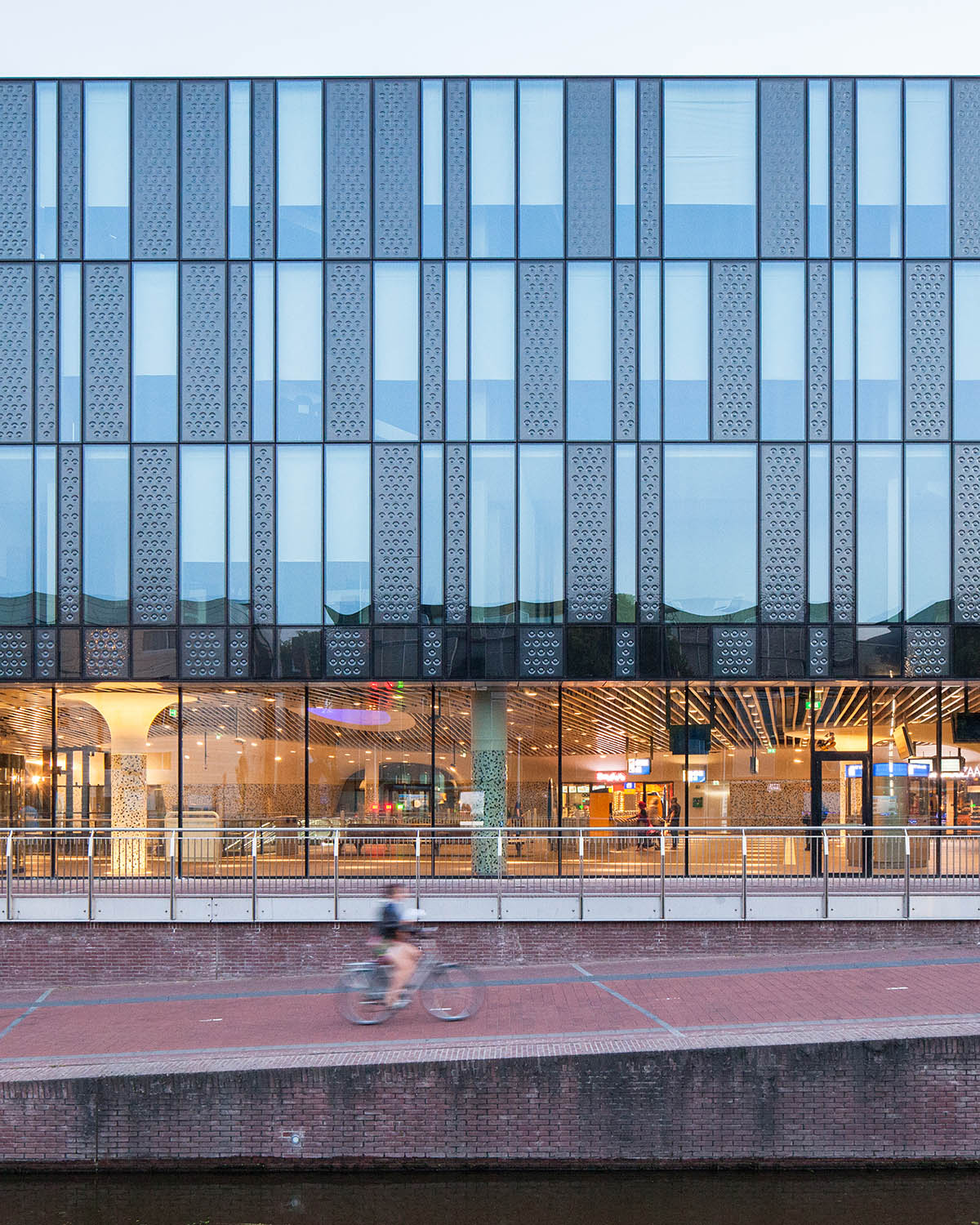 "The facade responds to the different sun orientations, which determined the amount of glass incorporated, thus mitigating daylight needs while reducing heat gain in the summer months," said the architects.

"The glass has a high light absorption factor but low solar absorption, and all windows can be opened manually for user comfort and natural ventilation. Solar panels on the roof provide 20% of the energy for the building mechanics and presence aware lighting. The GreenCalc+ score is rated at 270." 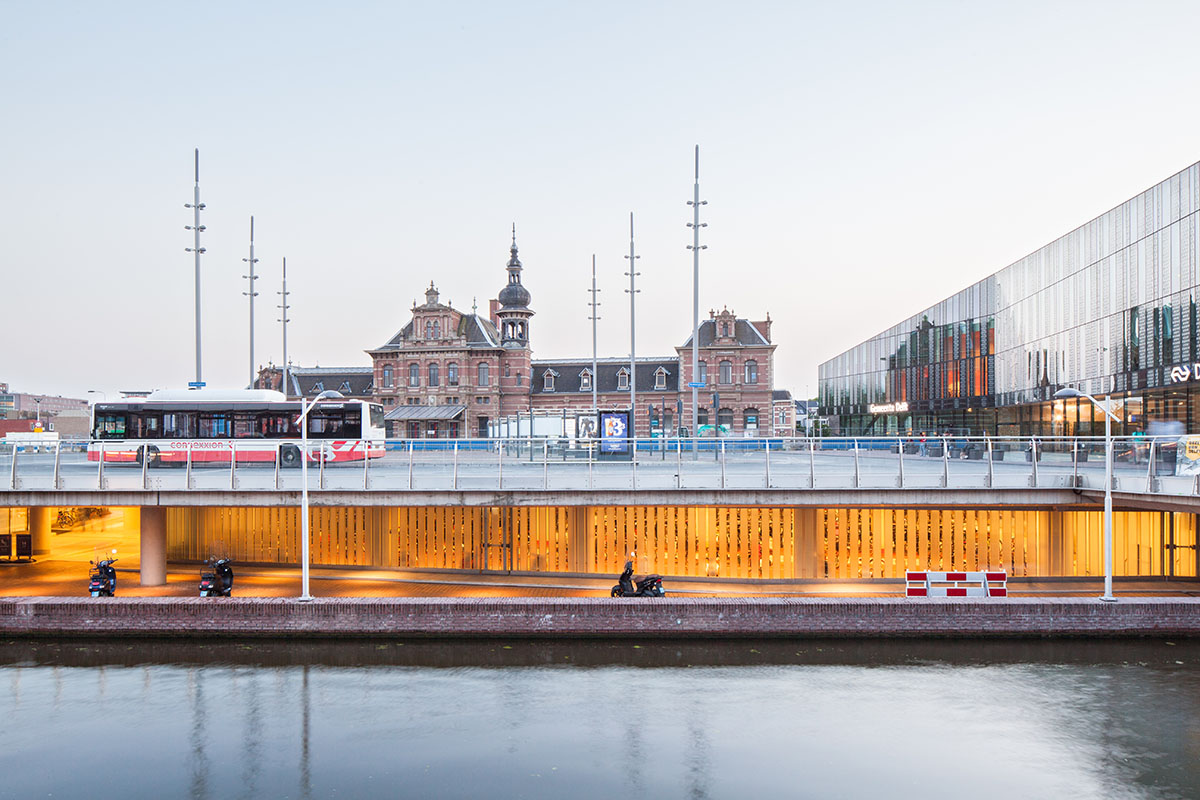 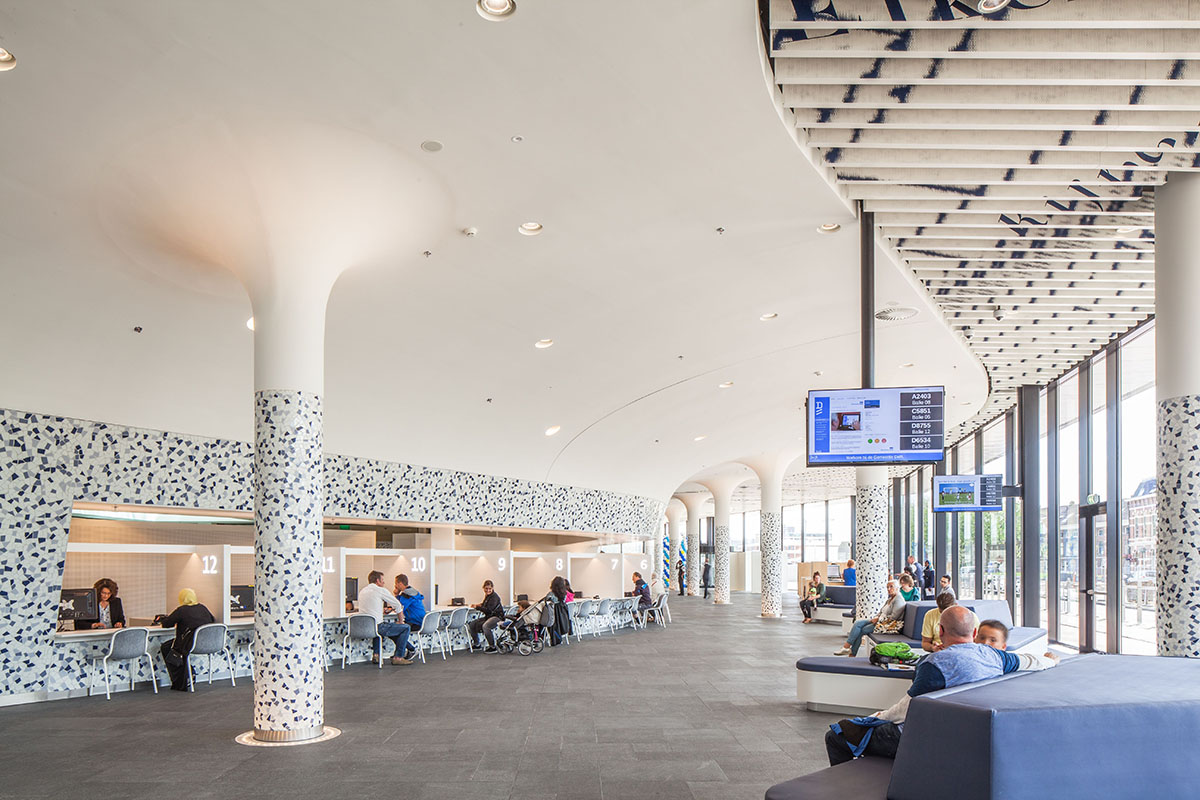 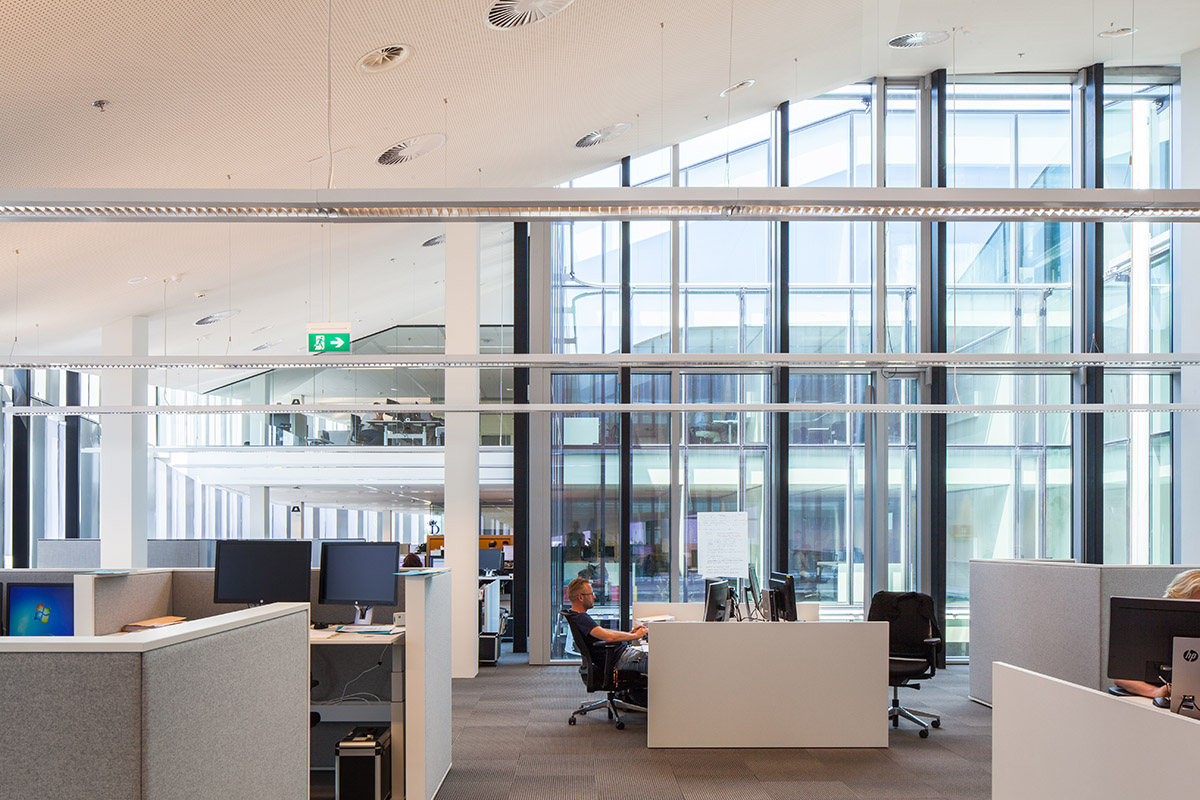 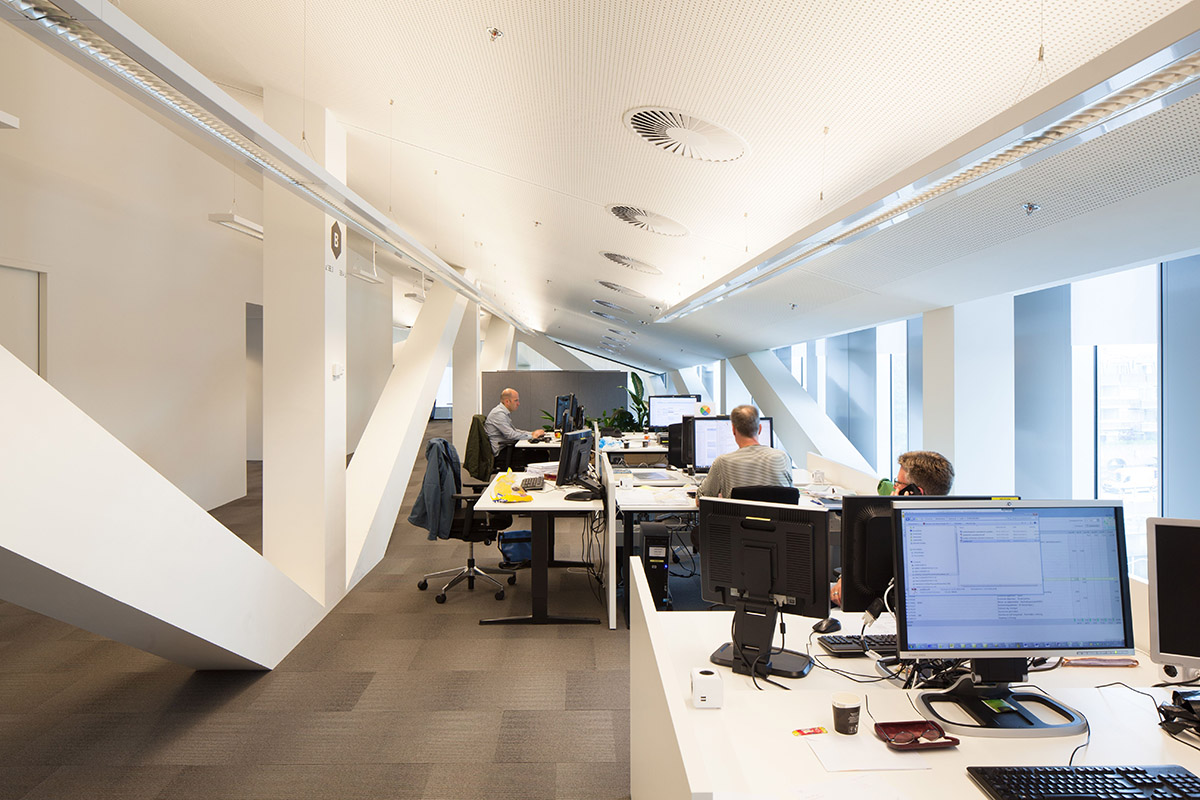 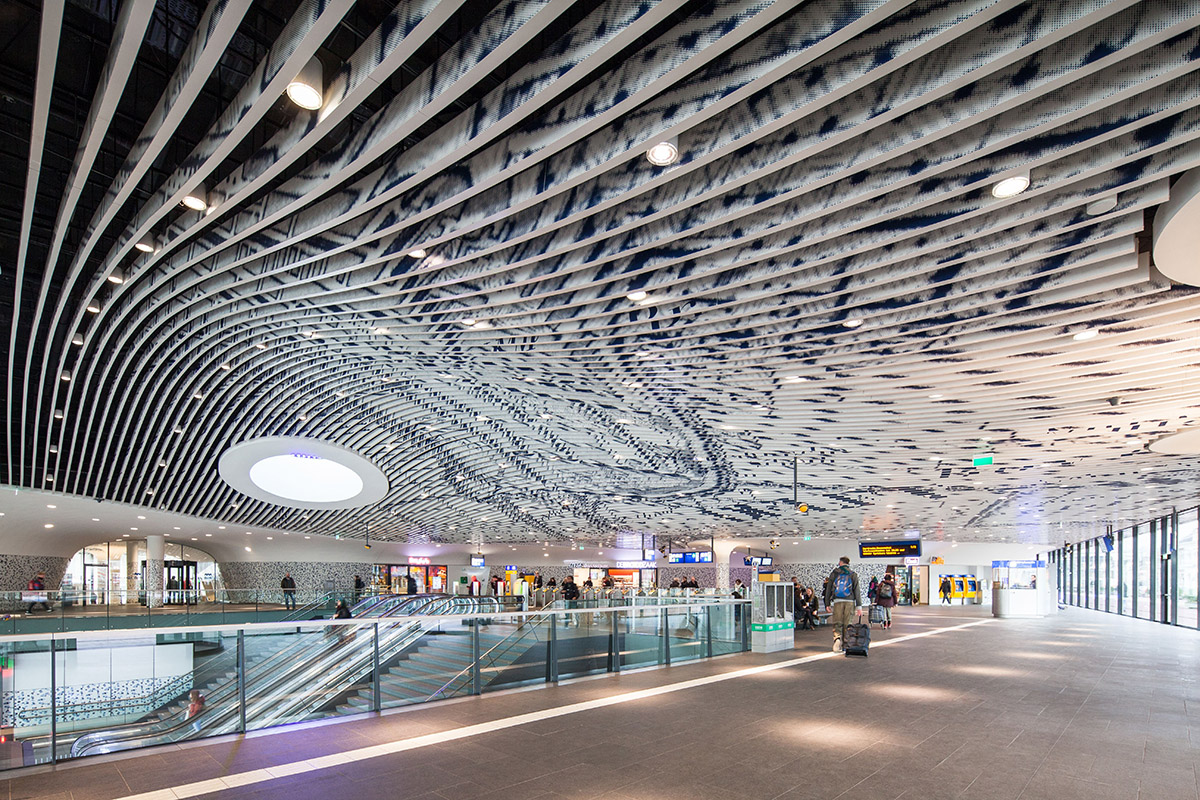 The undergroundstation platforms are designed by Benthem Crouwel Architects. 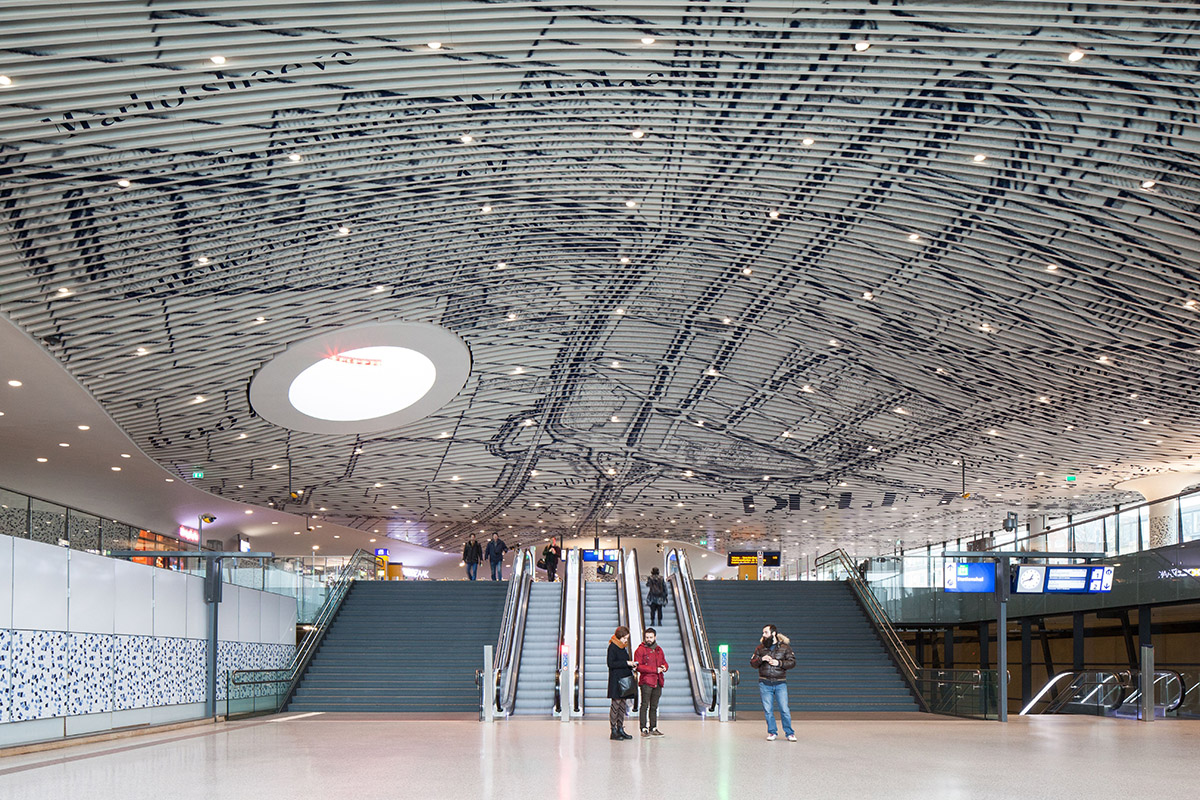 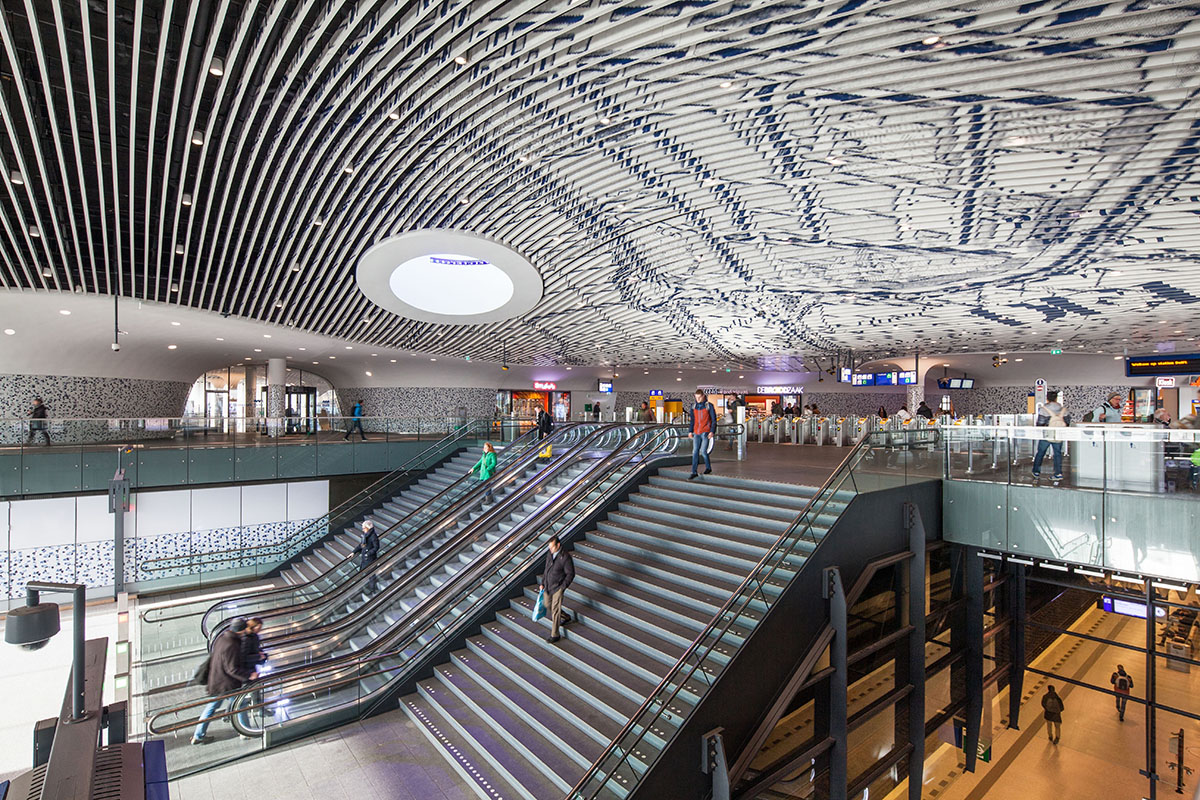 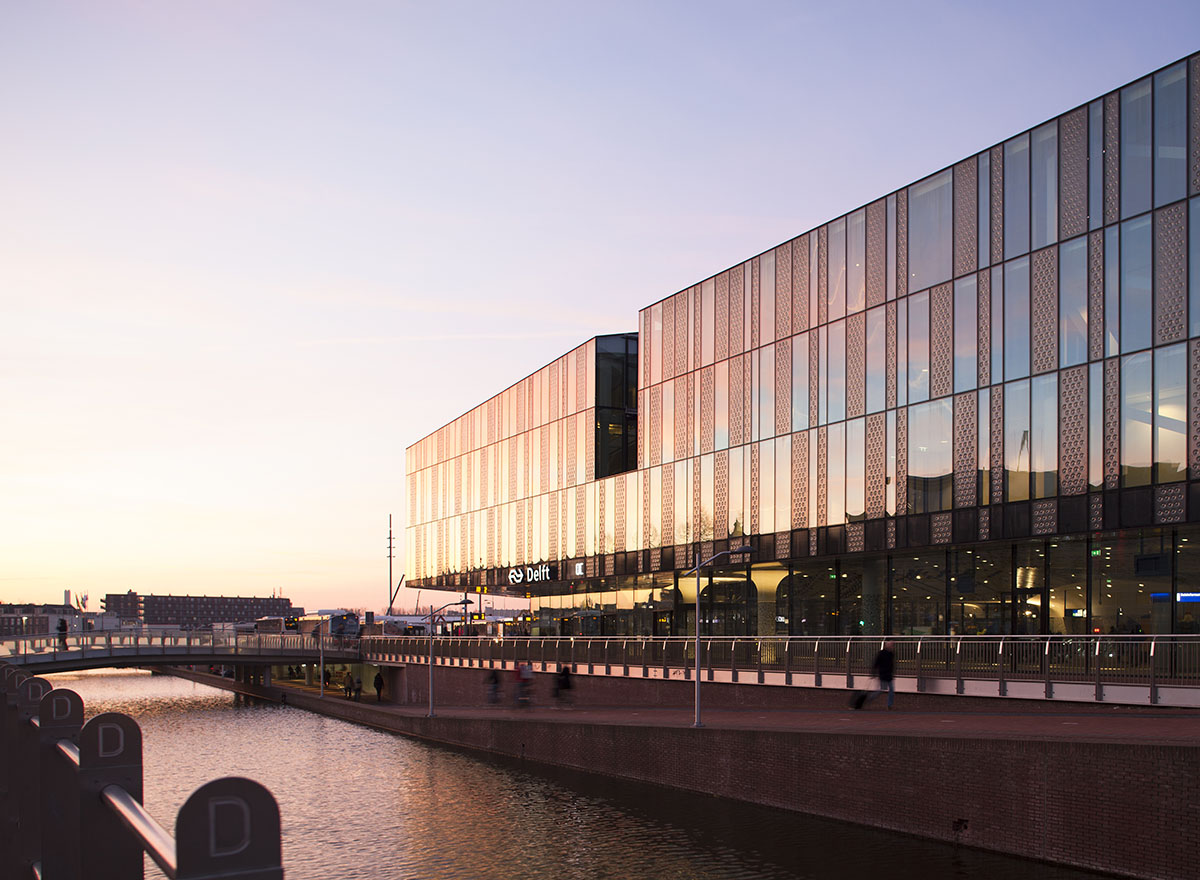 Programme: City hall (19,430 m2) around internal patios, a bicycle shed, an archive, a loading and unloading area and a public lobby of 2,230m2; the public lobby is visually and physically linked to the station hall of 2,450m2 with retail facilities and food and beverage of 850m2;total 28,320m2