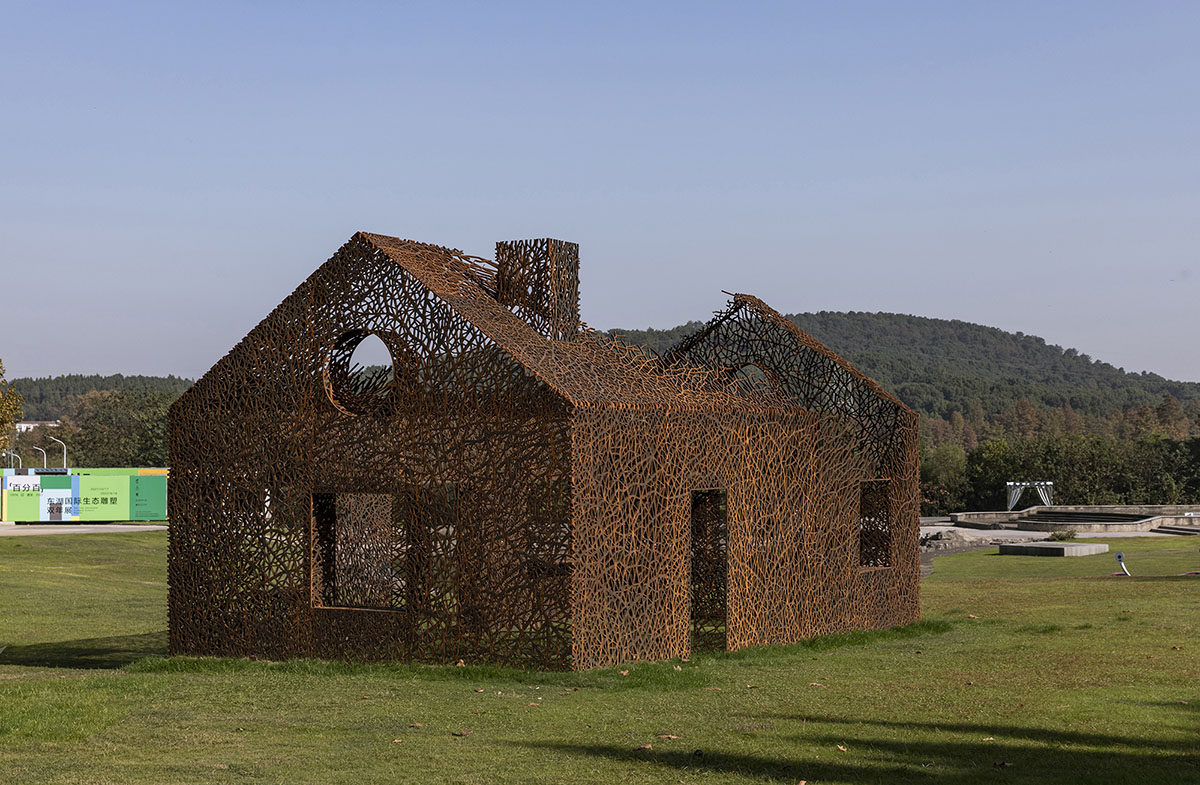 Beijing-based architecture practice Field Conforming Studio has completed a memorial space that invites visitors to participate in and experience.

Called The Vanished House, the project was created for the second East Lake International Ecological Sculpture Biennale held in Wuhan in 2021.

The venue for the exhibition was Wuhan Shimenfeng Memorial Park, a cemetery with beautiful environment and a tranquil spatial atmosphere. 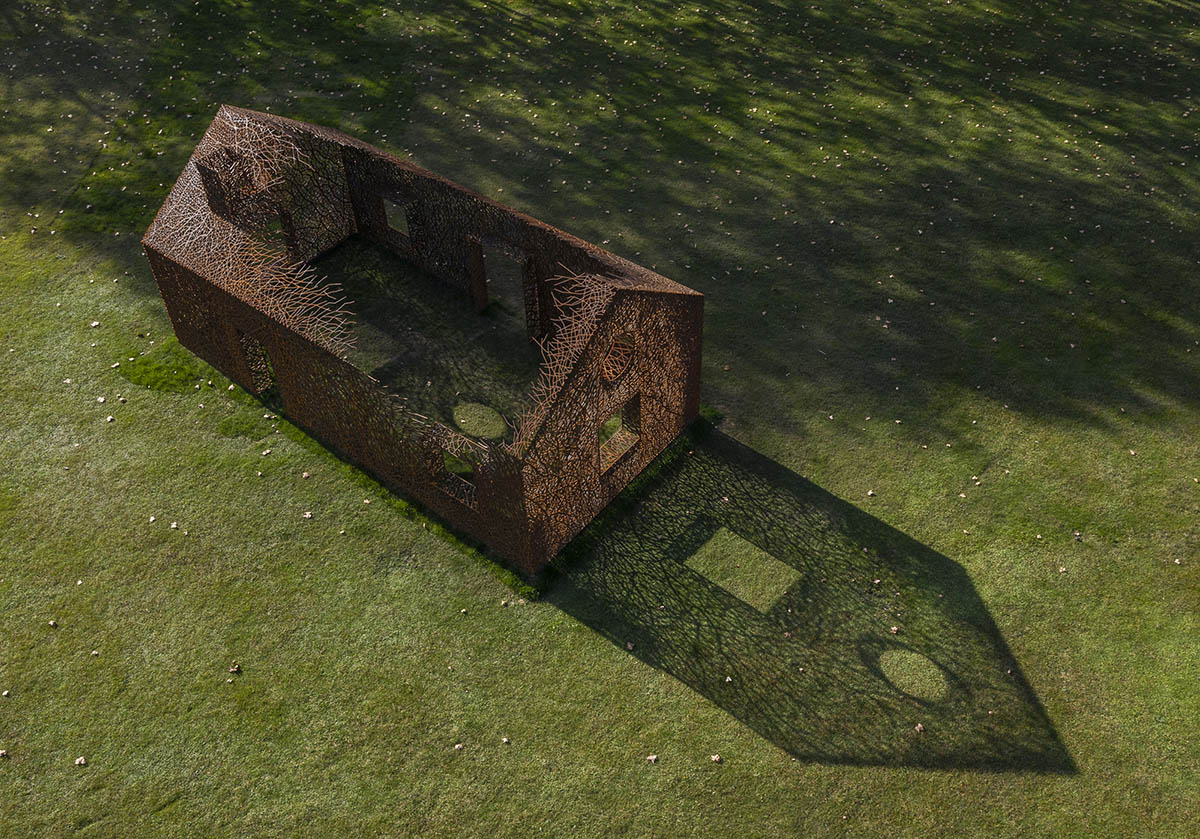 A place where the deceased rest peacefully, the venue has an ambience suitable for memorial and mourning activities. The Vanished House was created as an echo to this special attribute of the venue.

The work presents a house covered in sprawling ivies. A symbol of hearth and home, this house, as detached, leaves a space formed by the wrapping creepers. It is the remembrance of a vanished living space and thus of the people and things of the past. The Vanished House is a memorial space that invites visitors to participate in and experience. 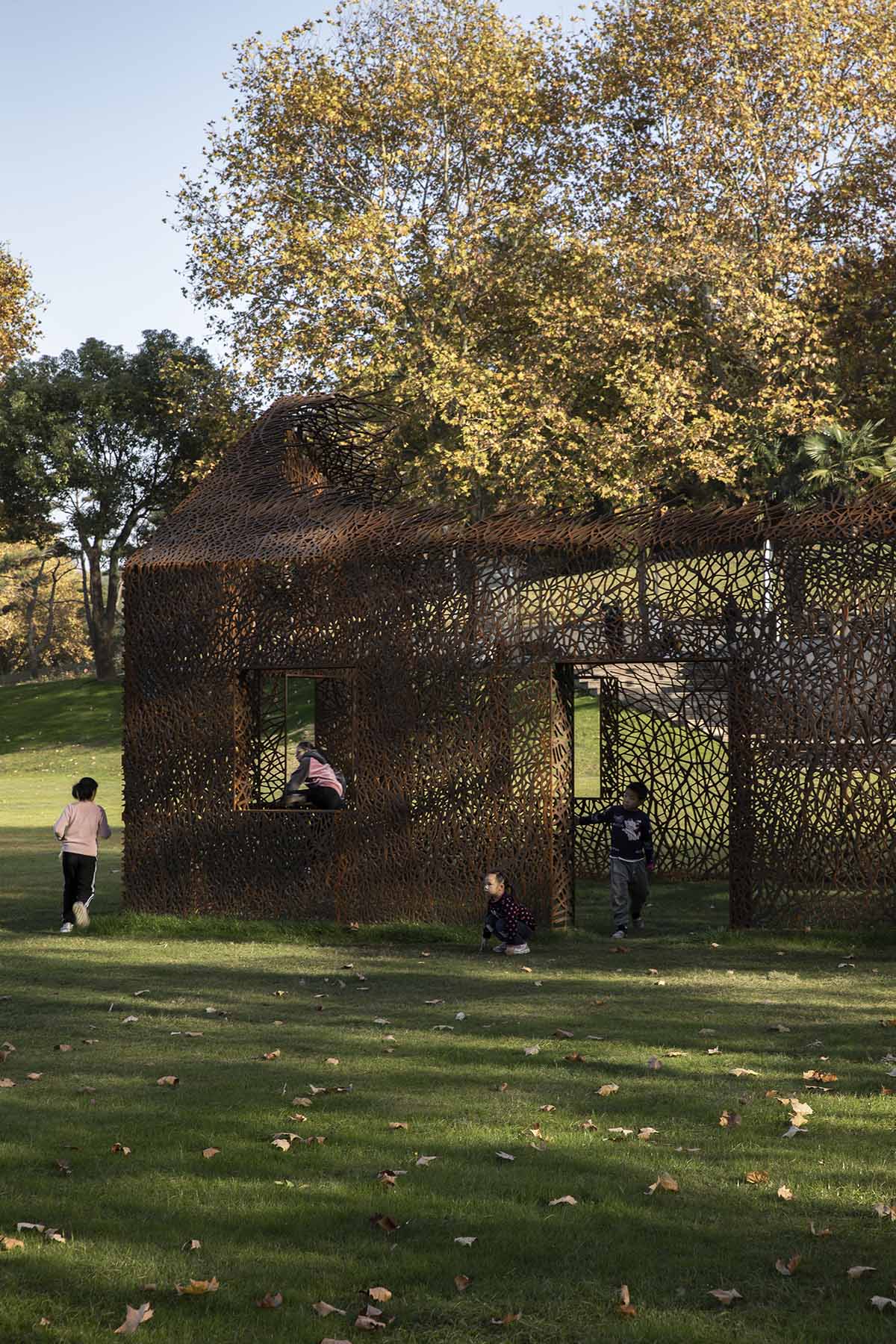 After they settled on a "vanished" house to resonate with the exhibition venue, the key question for the designers was what kind of house to choose.

In the beginning, they thought about choosing a house type with features specific to Wuhan to present locality. After research, however, they found that the city's old buildings, especially residential ones, didn't have obvious local features, while public constructions representative of Wuhan were not reasonable choices for such an environment. 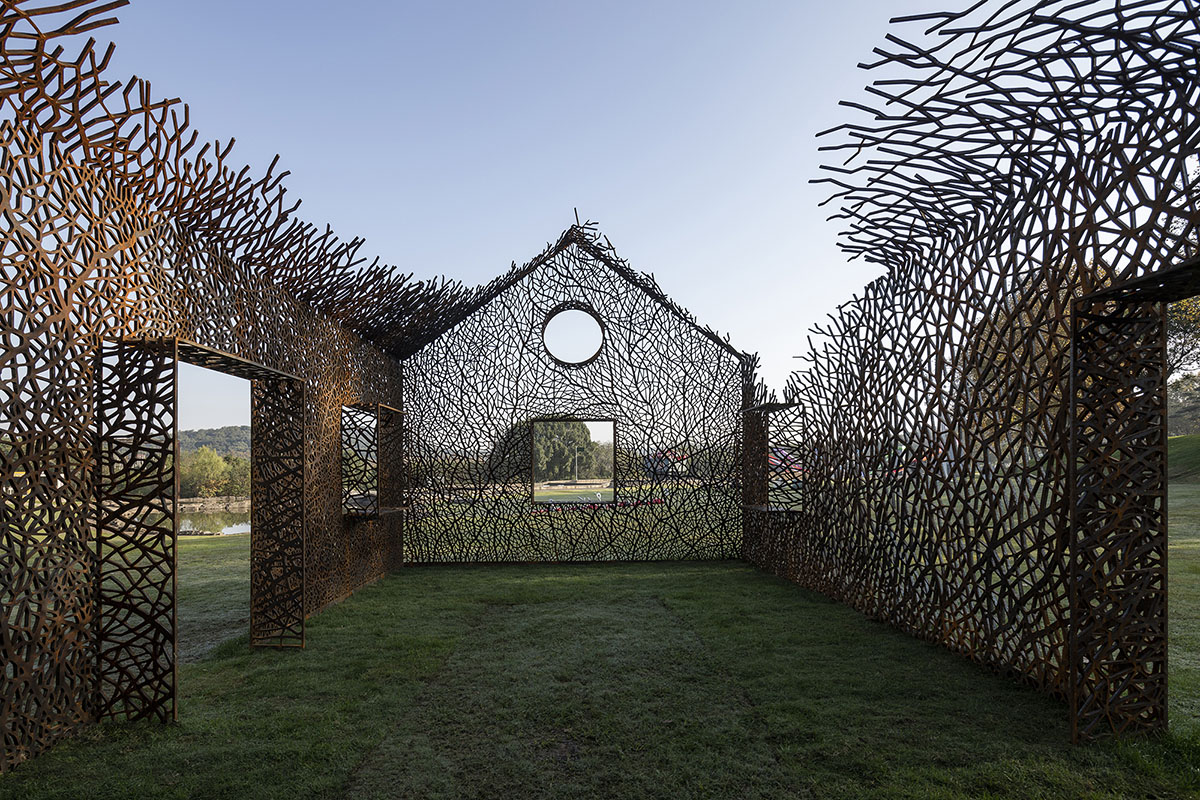 Finally, the team decided to choose the simplest image that a house could be. Involving neither locality nor extra symbols, it was just a simple house that resembled a child's sketch. The form, without many contrivances, adds more simplicity and purity to the work, while the patterns of the sprawling creepers introduce more sophistication. 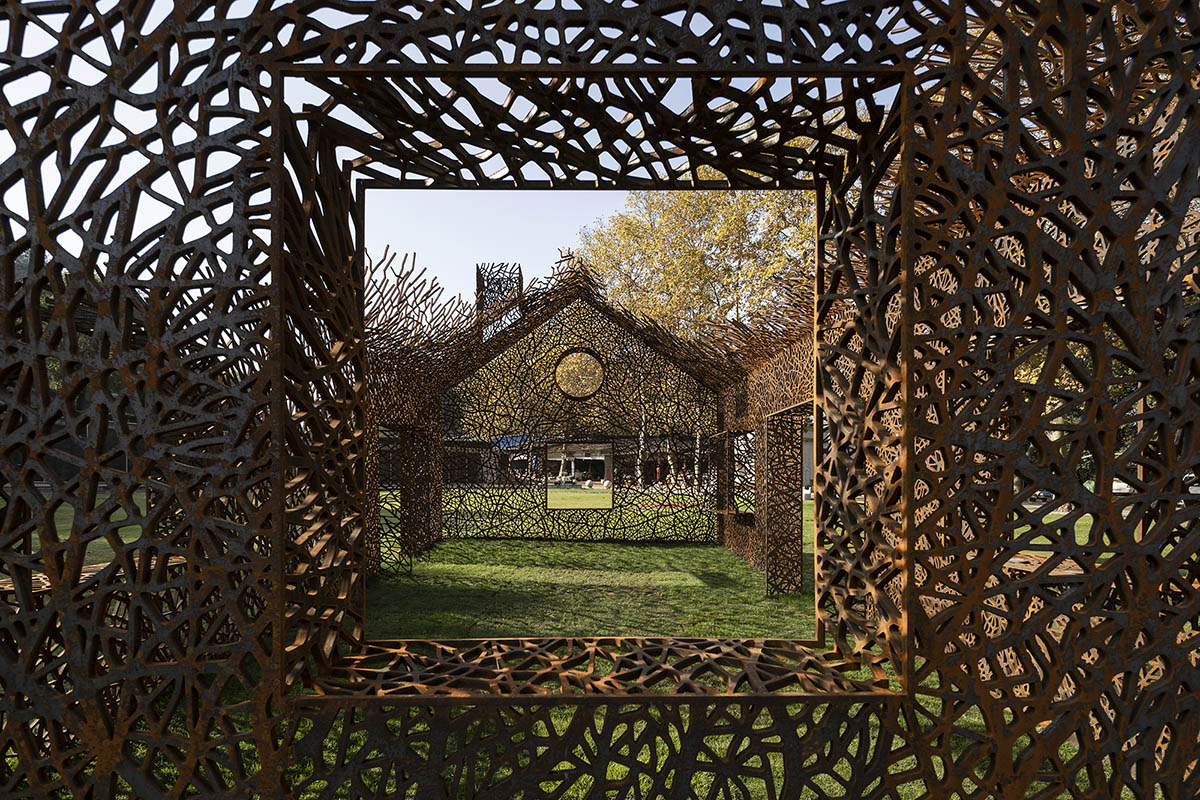 After the spatial form was confirmed, the designers had to figure out how to convey the sense of a vanished house through the status of the creepers.

To that end, they made a 1:10 miniature of the house with cardboard and sketched ivies on the model to present the growing status of the plants. In this way, the designers could control the density and size of the vines as well as the turns and connections they present on the walls. The process of sketching was the most sentimental and exciting part of the creation, and has brought a distinctive feature of handicrafts and paintings to the work. 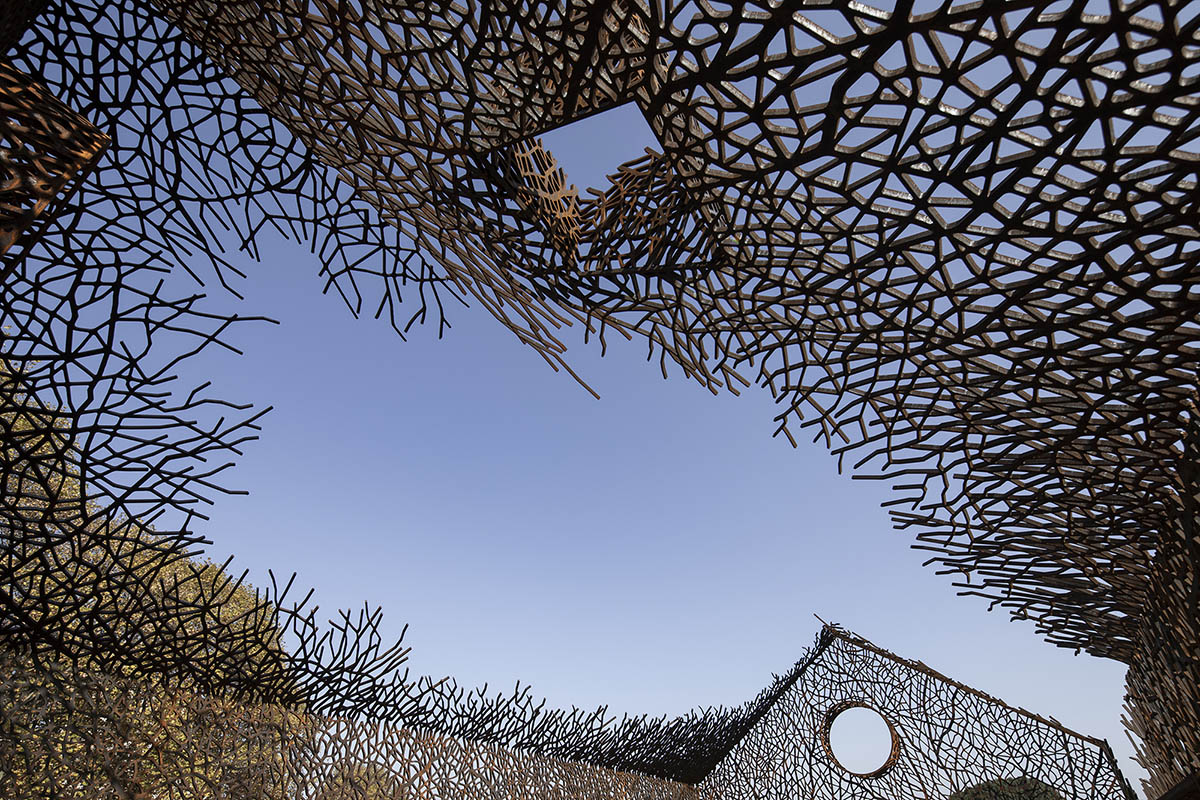 It was a time-consuming, tedious work. In addition to drawing the lines one by one, the most important procedure was to deal with the connections at where the lines turned. It was a step that needed the team to pay much special attention to. They had been modifying and checking the details until manufacturing was started in the factory. 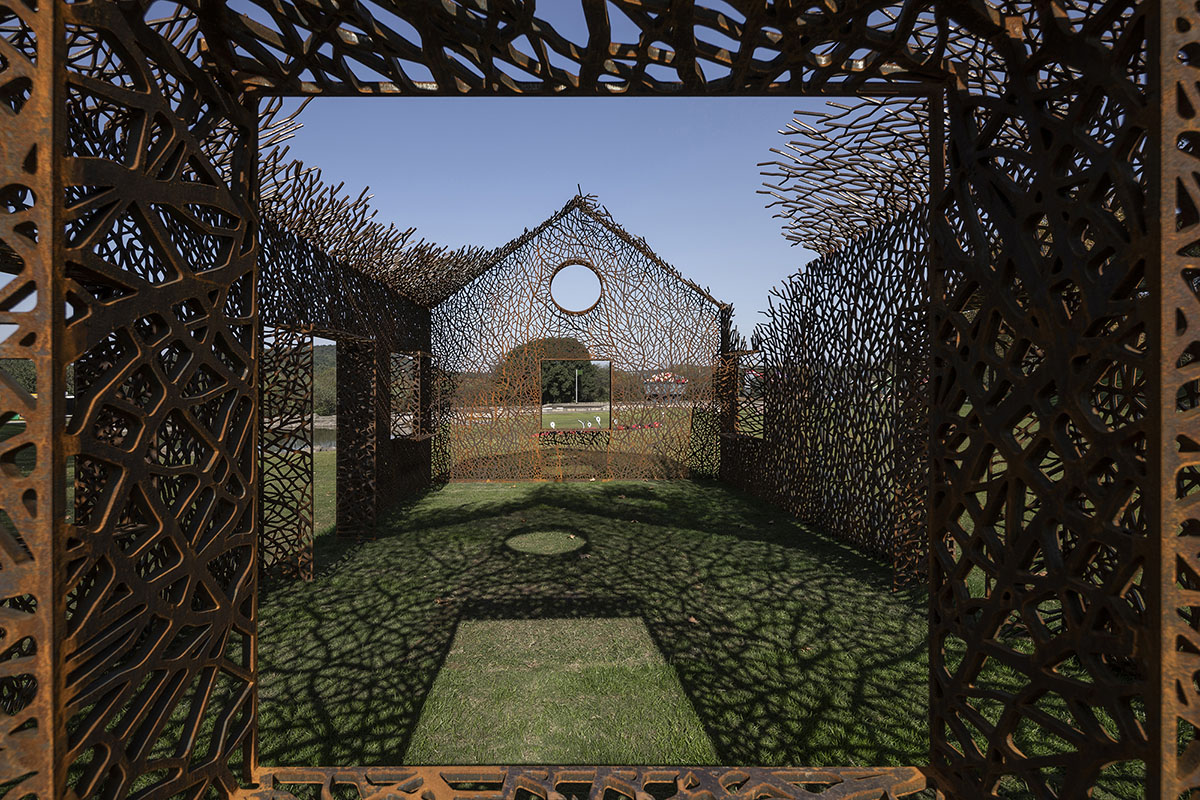 The material used for the work is Corten steel, which was treated through a laser cutting process. There are two reasons why they chose Corten steel. First, after rusting, Corten steel turns crimson, a color that can well express the texture of the creepers' vines. 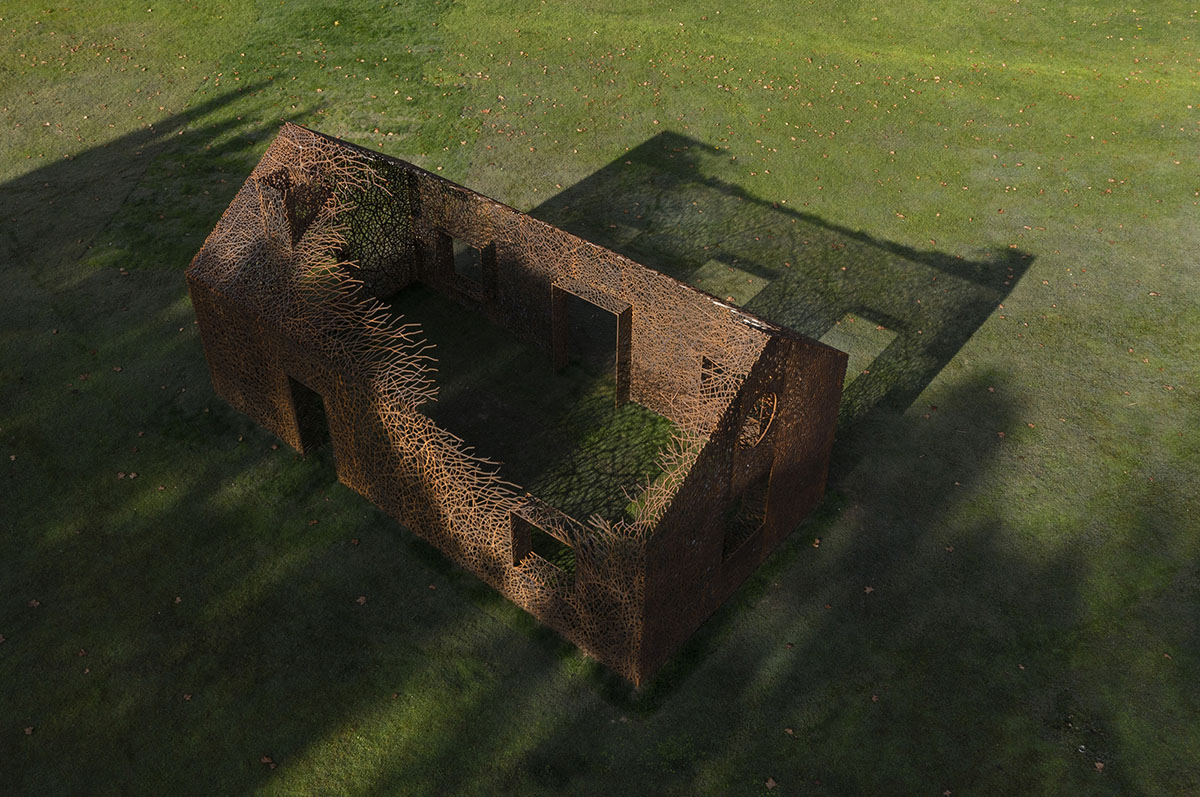 Second, "The Vanished House" creates a space that people can enter. As the wall is formed by ivies, it needs certain strength to form a space without relying on other structural forms, and the two-centimeter-thick Corten steel plates provide the structural strength required for the wall to support itself.

Over time, the color of the Corten steel plates will get darker with sunshine and rain, and the intention of this work will become increasingly prominent. 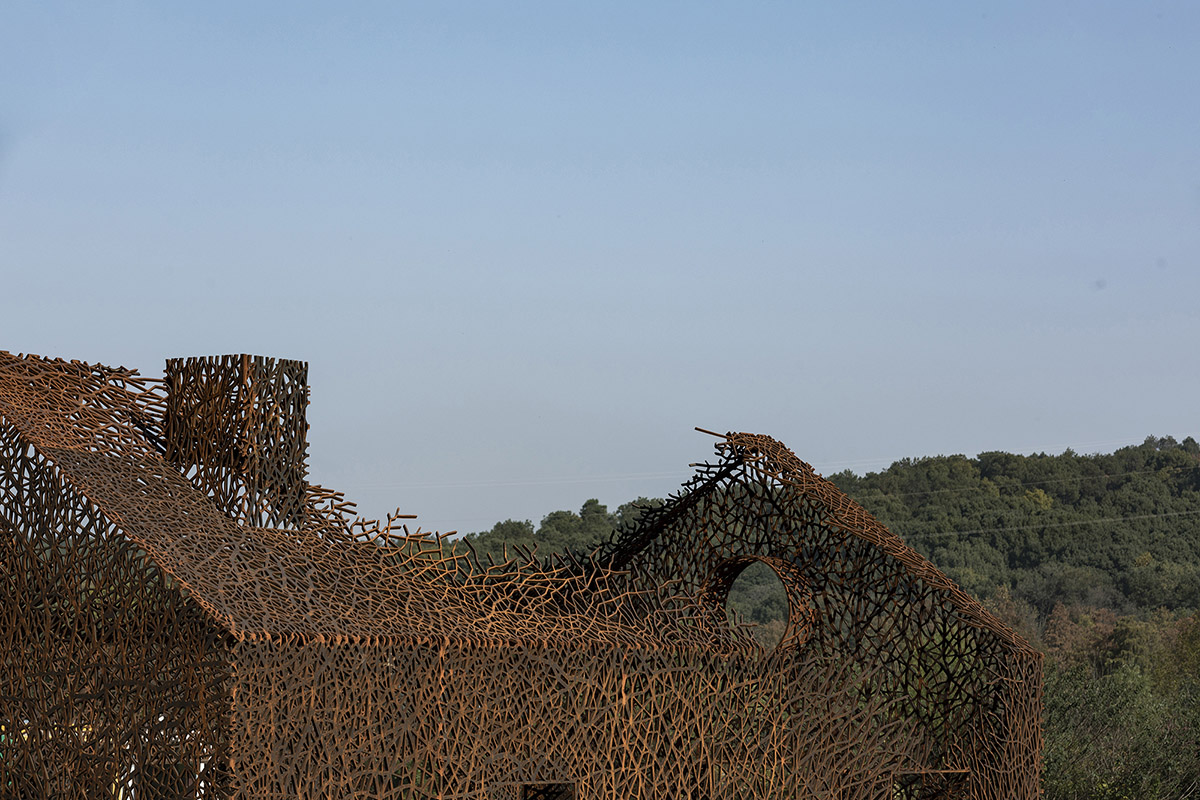 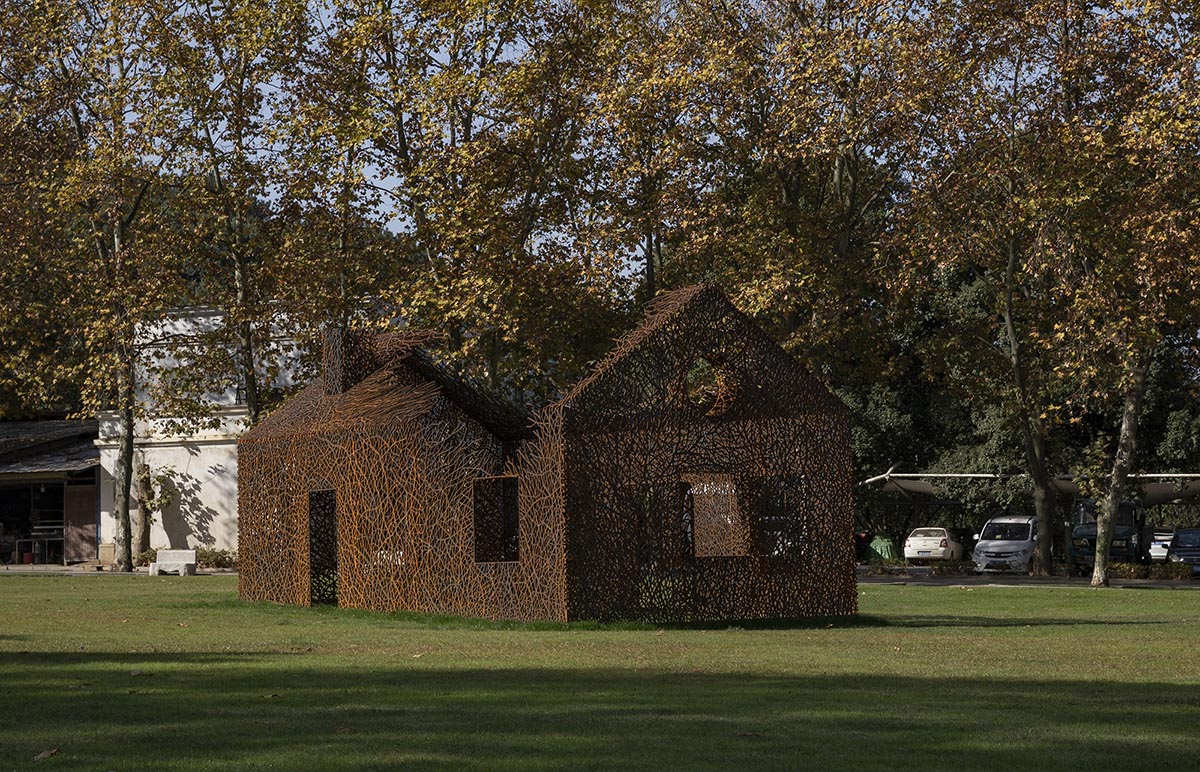 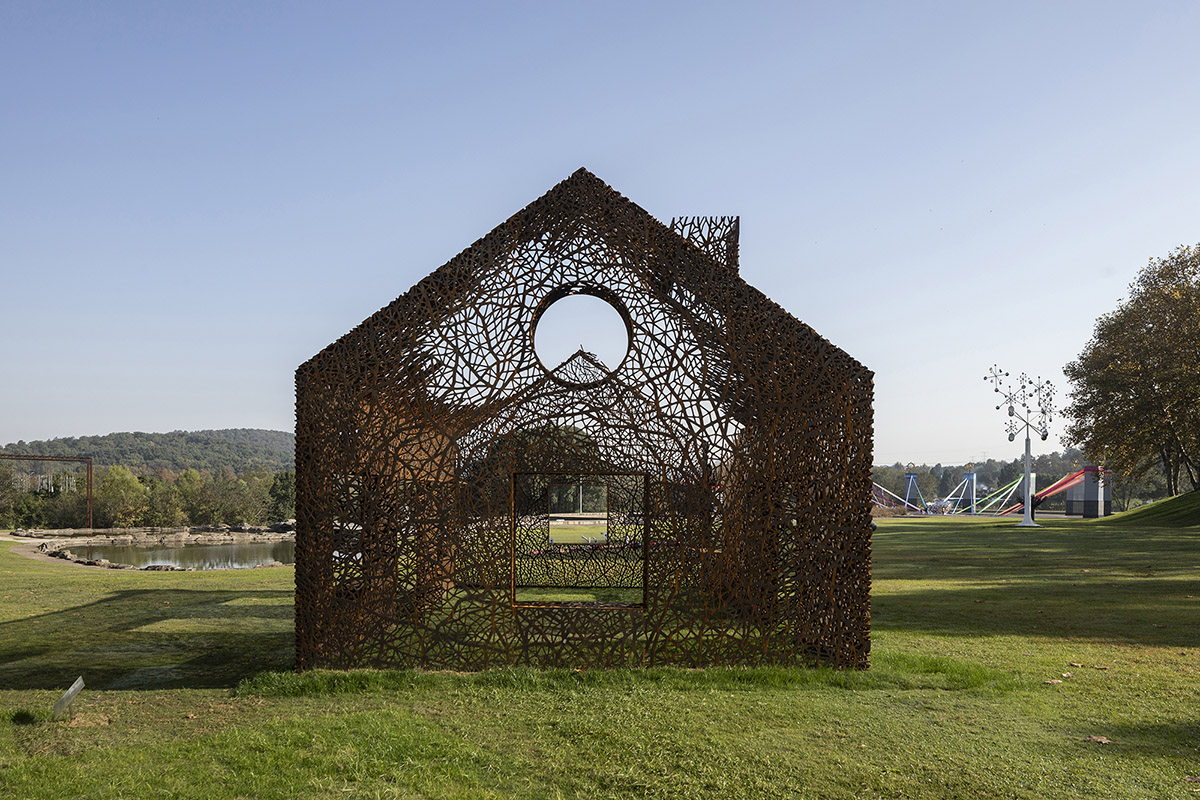 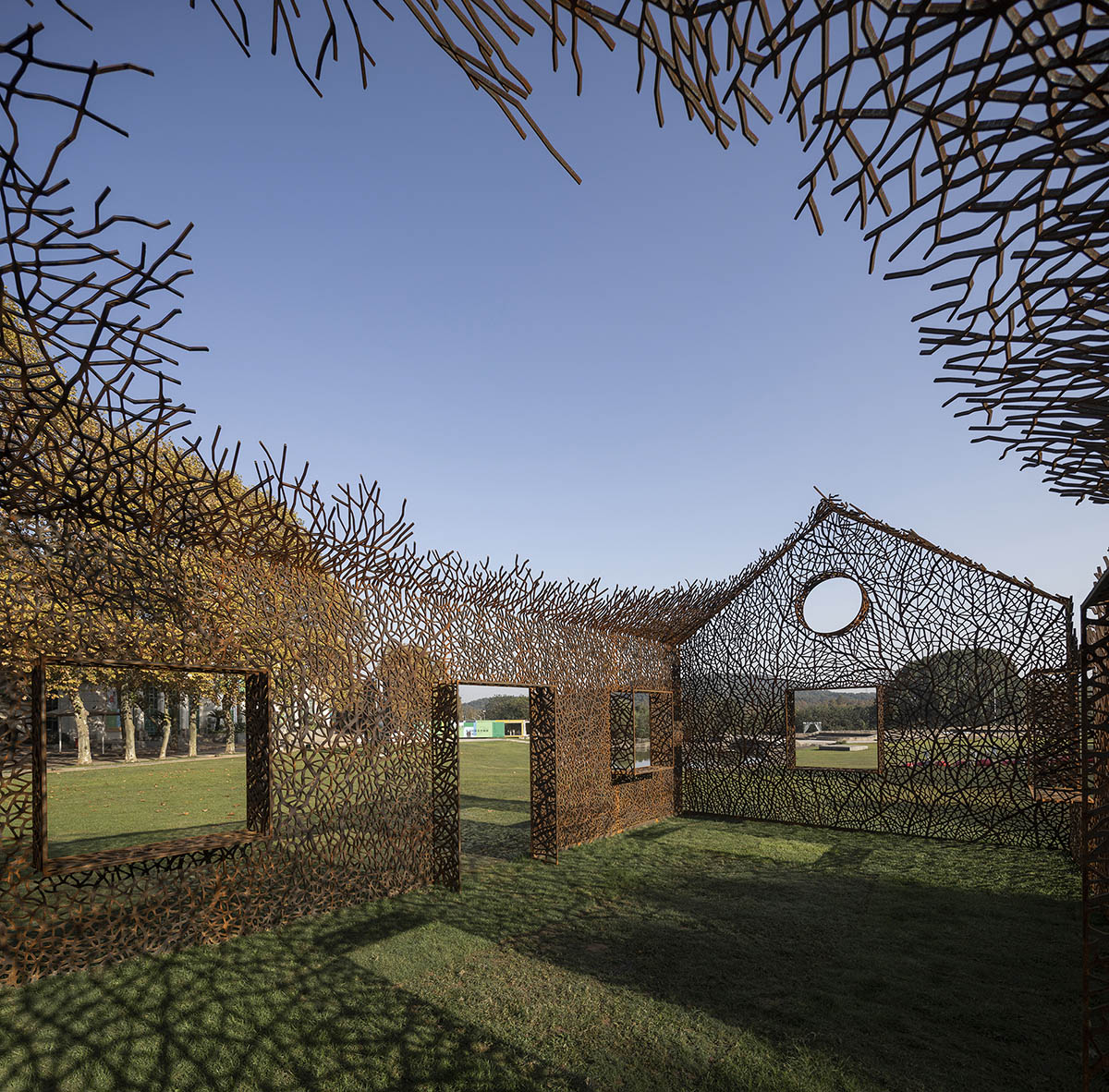 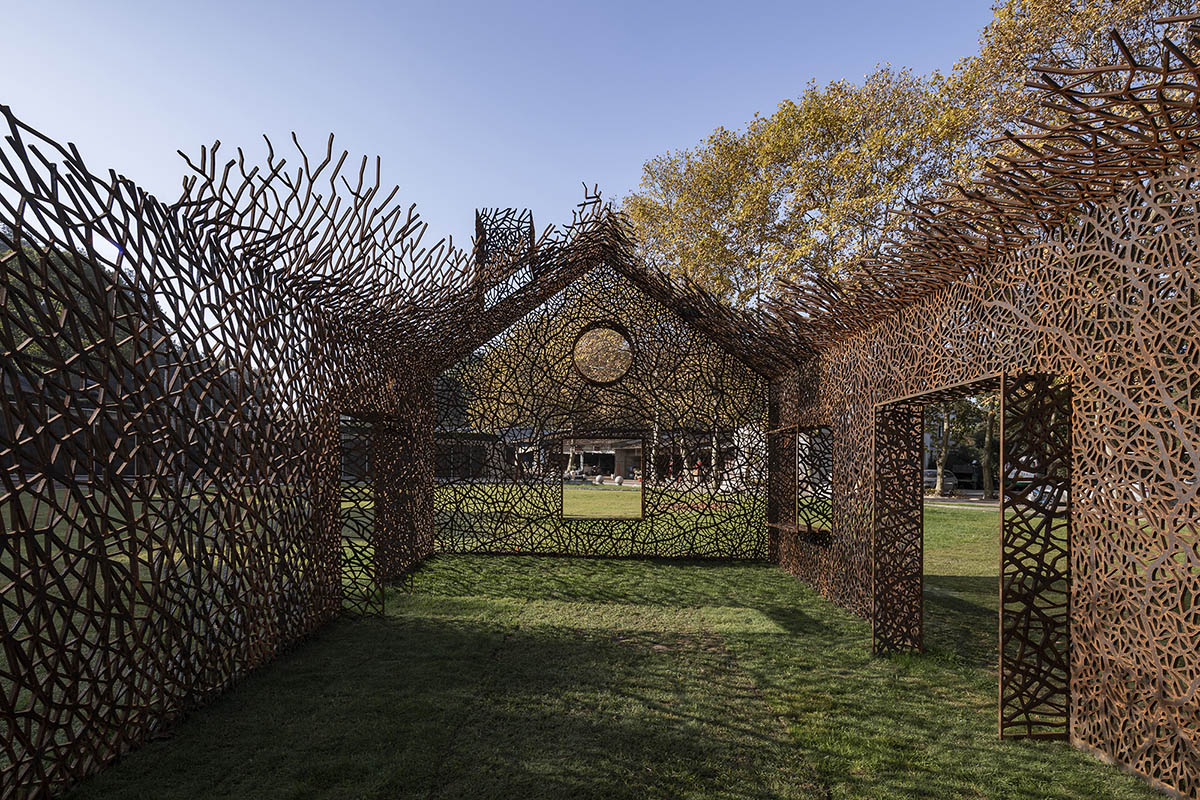 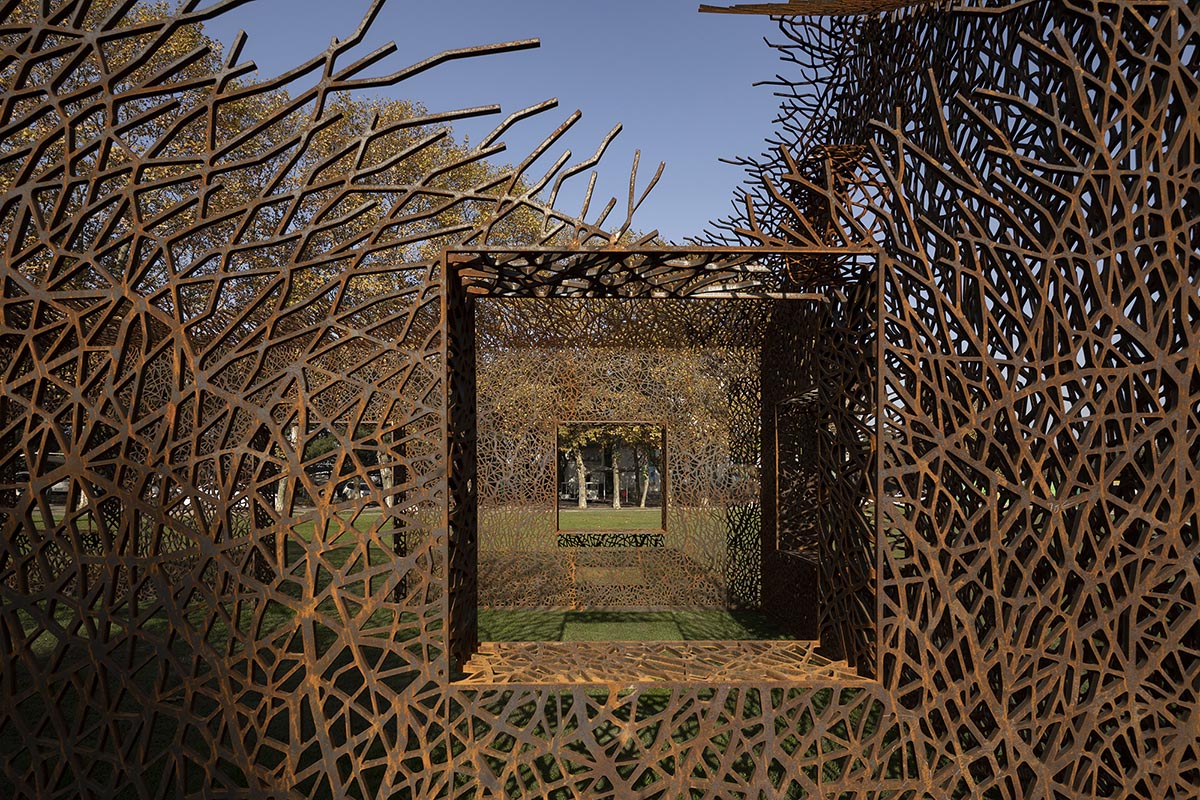 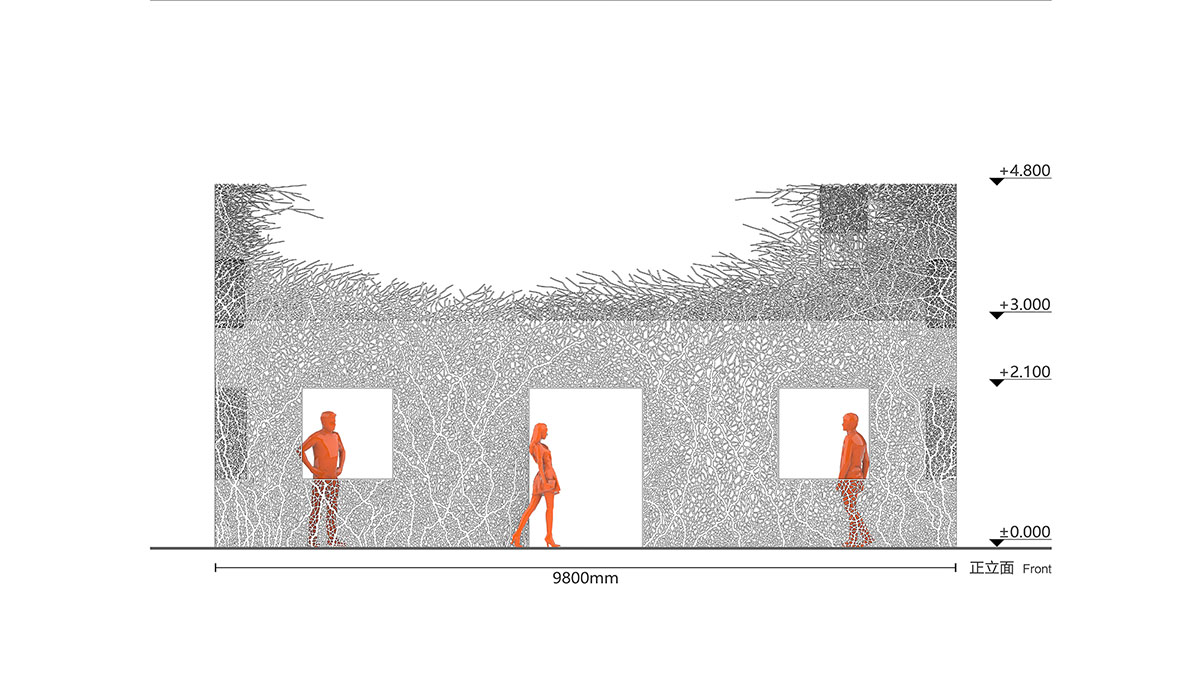 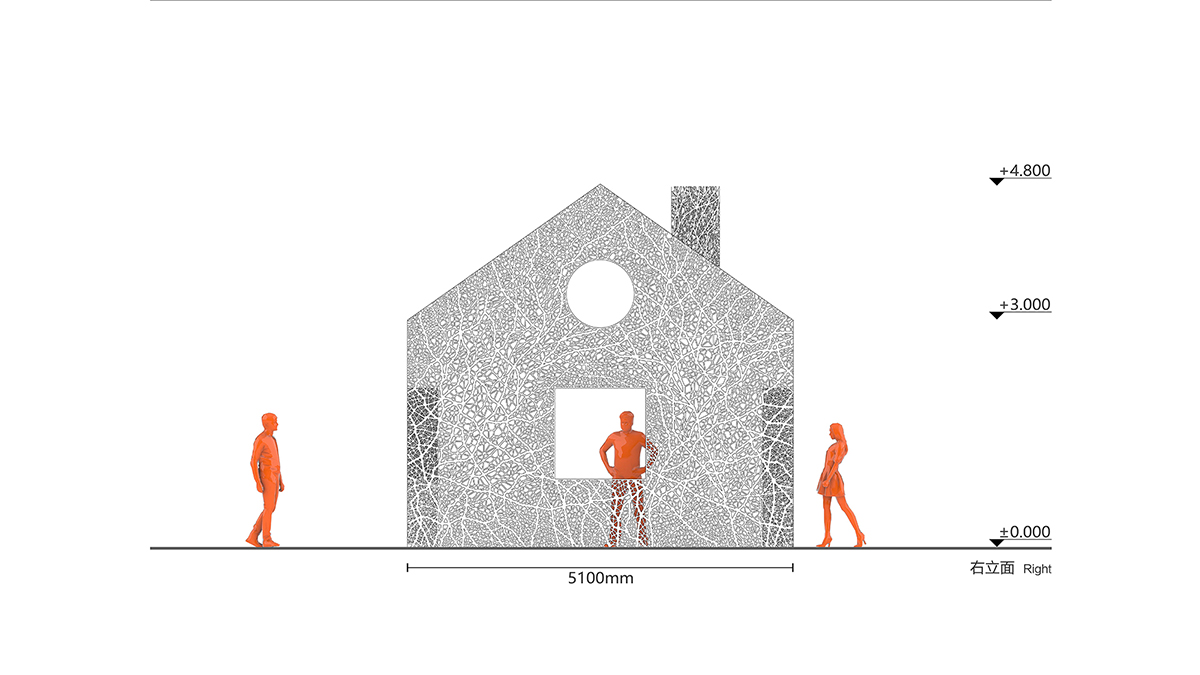 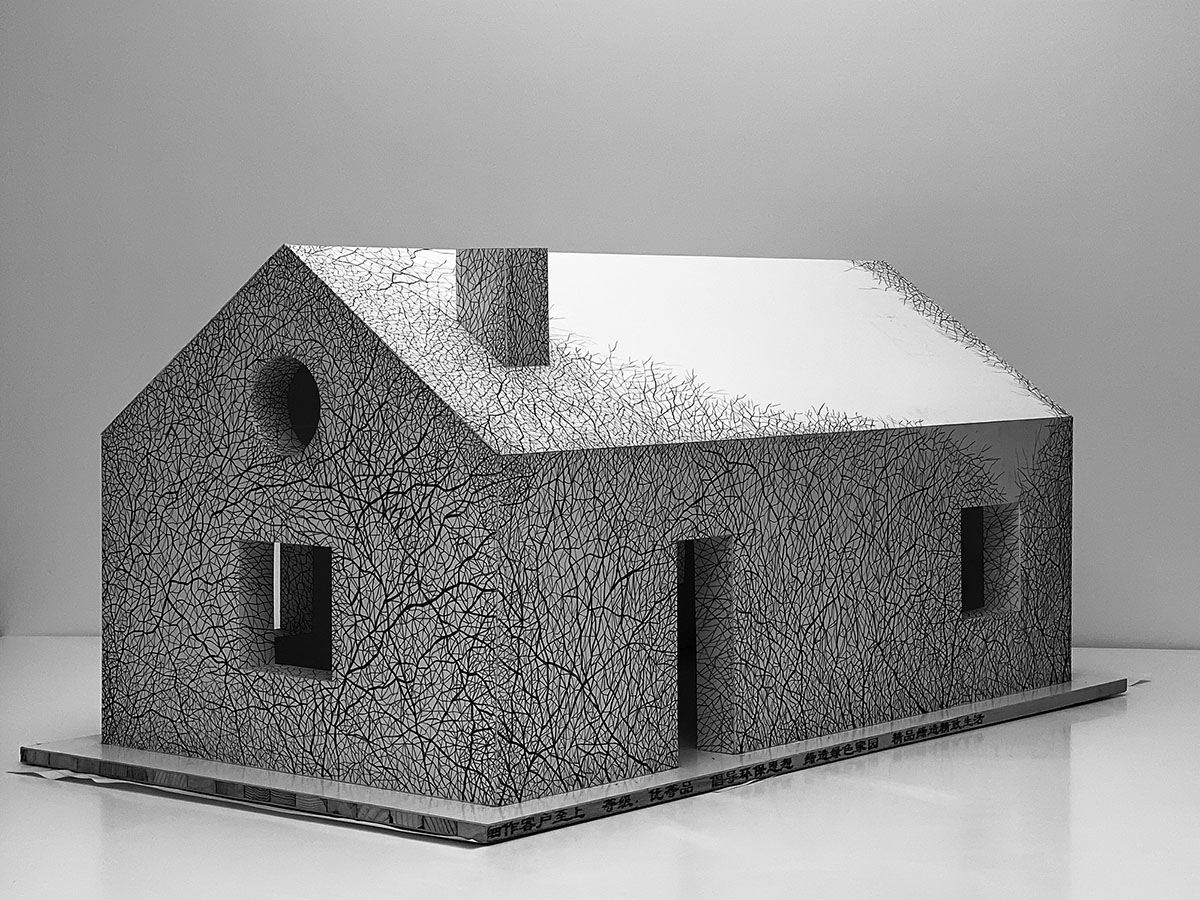