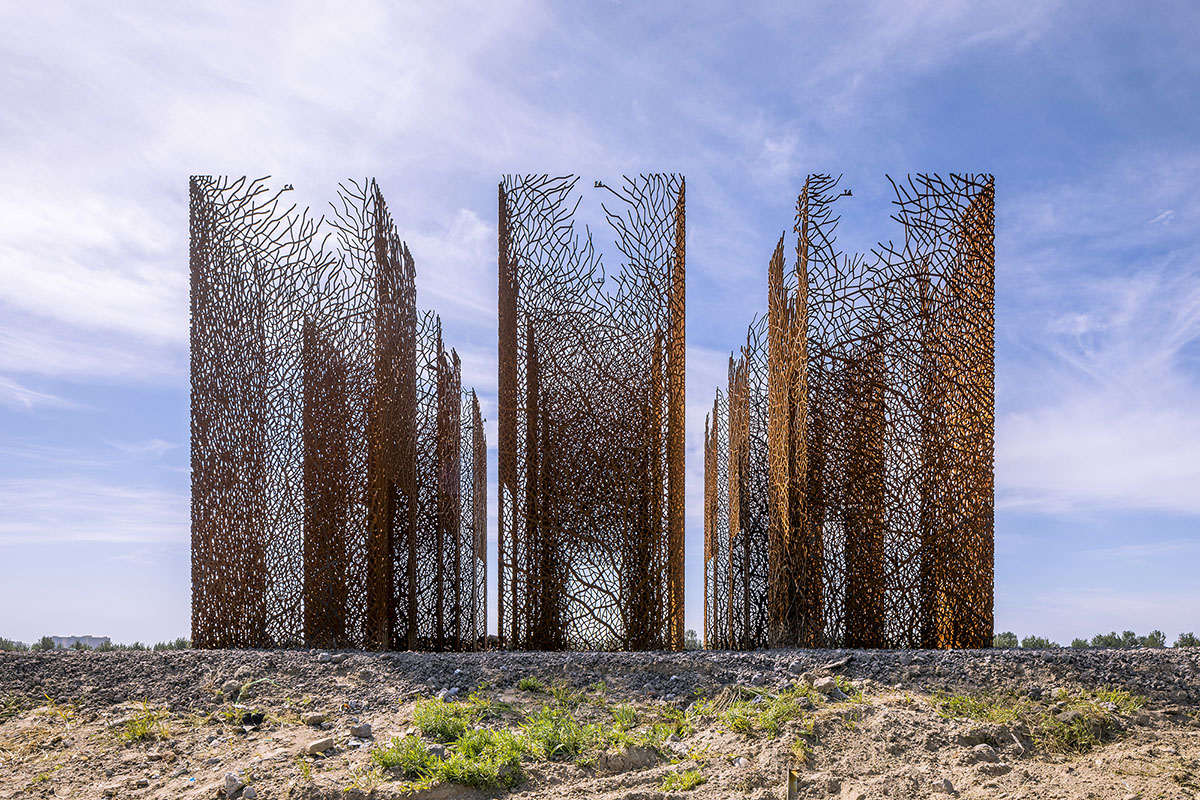 Named Column Matrix, the installation was created for the exhibition at 2021 Delong Steel Sculpture Art Festival in Tangshan.

The site, located on the Delong Steel Art Park, is expansive and flat. Close to Bohai Sea, it was originally a tidal-flat wetland, with soil conditions not conducive to the growth of trees.

As the studio noted, there are several water areas within the park, which provide favorable water and grass resources for birds to inhabit, hence becoming a wetland bird reserve. 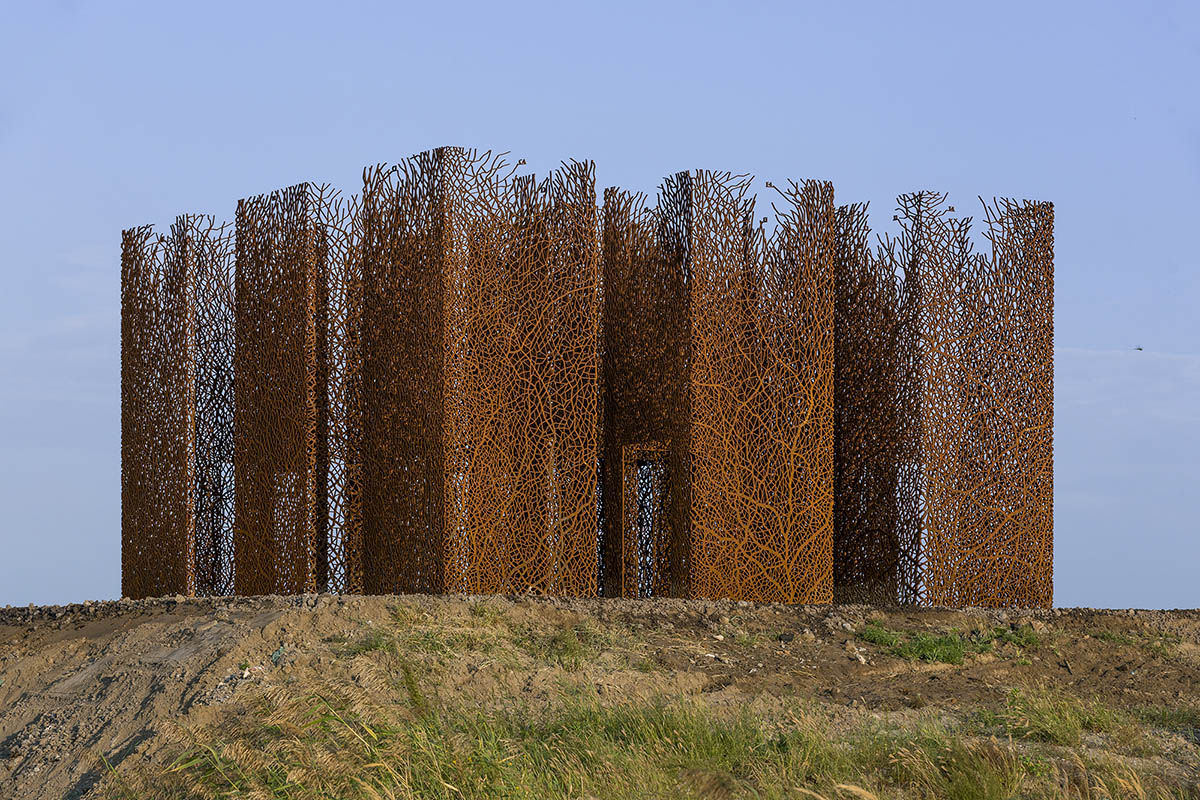 Meanwhile, the park forms a strong contrast with the tall, spectacular industrial facilities in the steel production zone to its north side. Its east and west sections are long yet expansive, connecting with protection forests.

The south zone of the park originally provided a direct view to the sea, which is interrupted by a new property development composed of rows of tower buildings. The park is expansive yet has a flat terrain, so the property development appears like a large screen right in front of it, which controls the skyline and poses an oppressive feeling to the park. Field Conforming Studio's design intention was to create a "landmark" in the park, to counter and mitigate the oppressive feeling and visual abruptness of the large property development, or at least to create a visually progressive spatial relationship in the park's south zone to strengthen its visual depth.

To that end, the volumes of the work need to extend upwards and meanwhile form a cluster, to ensure both height and spatial volume. This is the logic behind this design work. 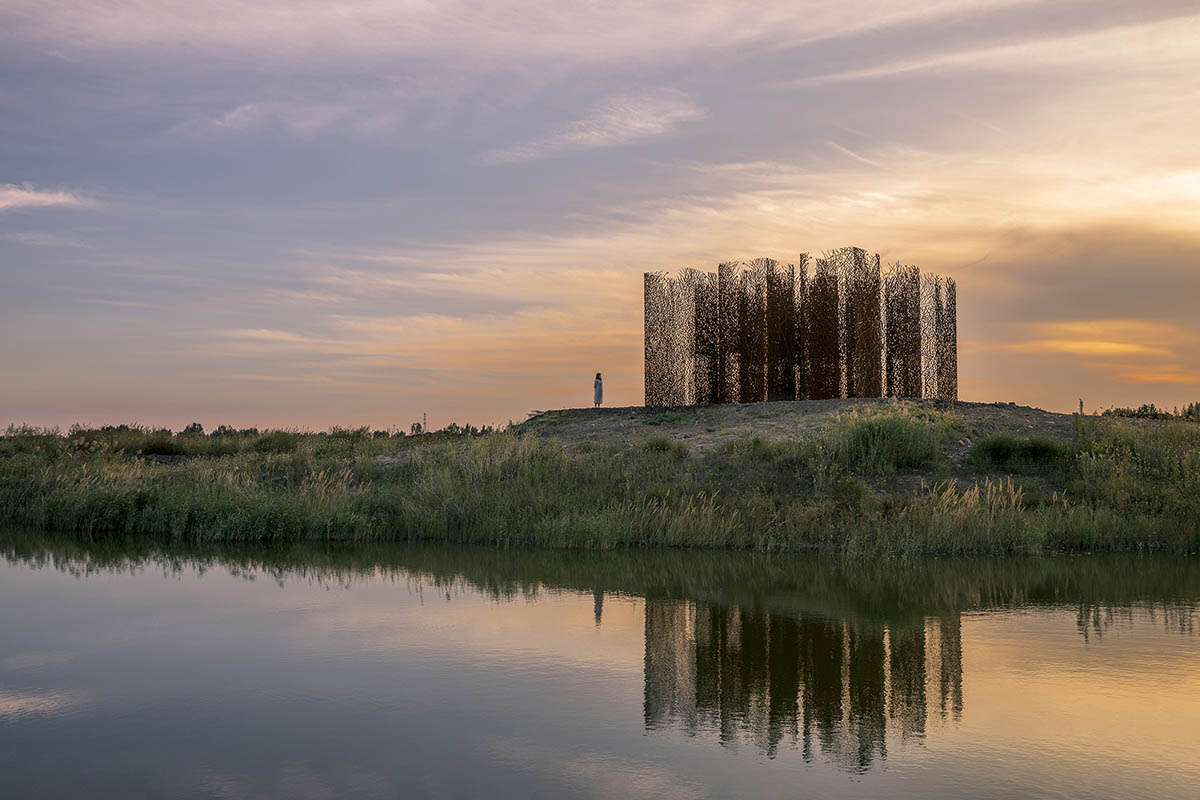 The original plan was to find a relatively higher area within the south zone of the art park, and to set a matrix of erecting columns to create the highest point in the park, so as to confront the tower buildings of the property development in the distance.

The square matrix consists of 9 hollow columns, each of which is enclosed by steel panels that were planned to be 7.2m, 2.2m and 0.02m in length, width and thickness. And the distance in between columns was set at 1.5m. 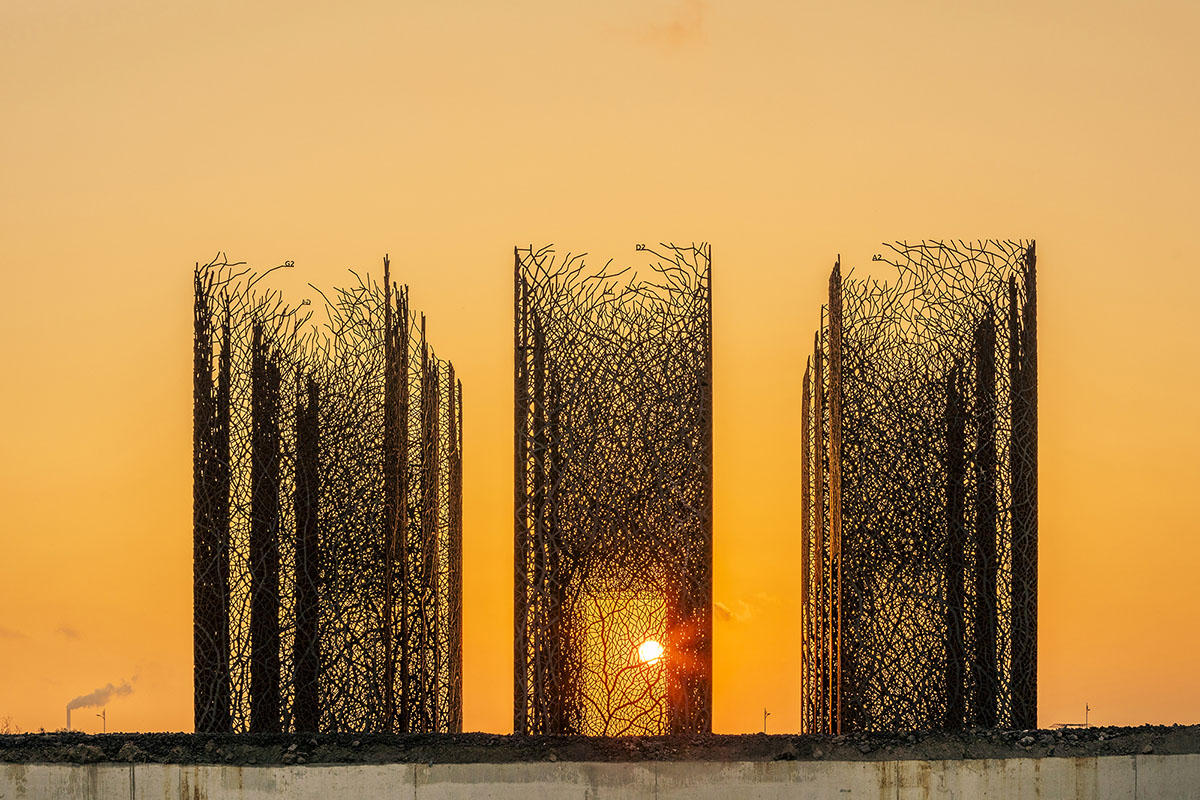 The number of columns and the distance between columns were determined based on a deduction process through models, for the purpose of achieving a strong sense of clustered blocks. However, during construction, the height of each column was reduced from 7.2m to 6m for the sake of saving cost. This inevitably lowered the overall height of the matrix of columns, but luckily its impact on the overall massing was acceptable as it didn't affect the magnificent spatial atmosphere.

According to the design team, a public art work needs to be given "expressions", and has to "tell" and convey messages. Its expressions and narratives need to evoke interaction, and the messages it conveys have to resonate with people's daily experience and emotions. 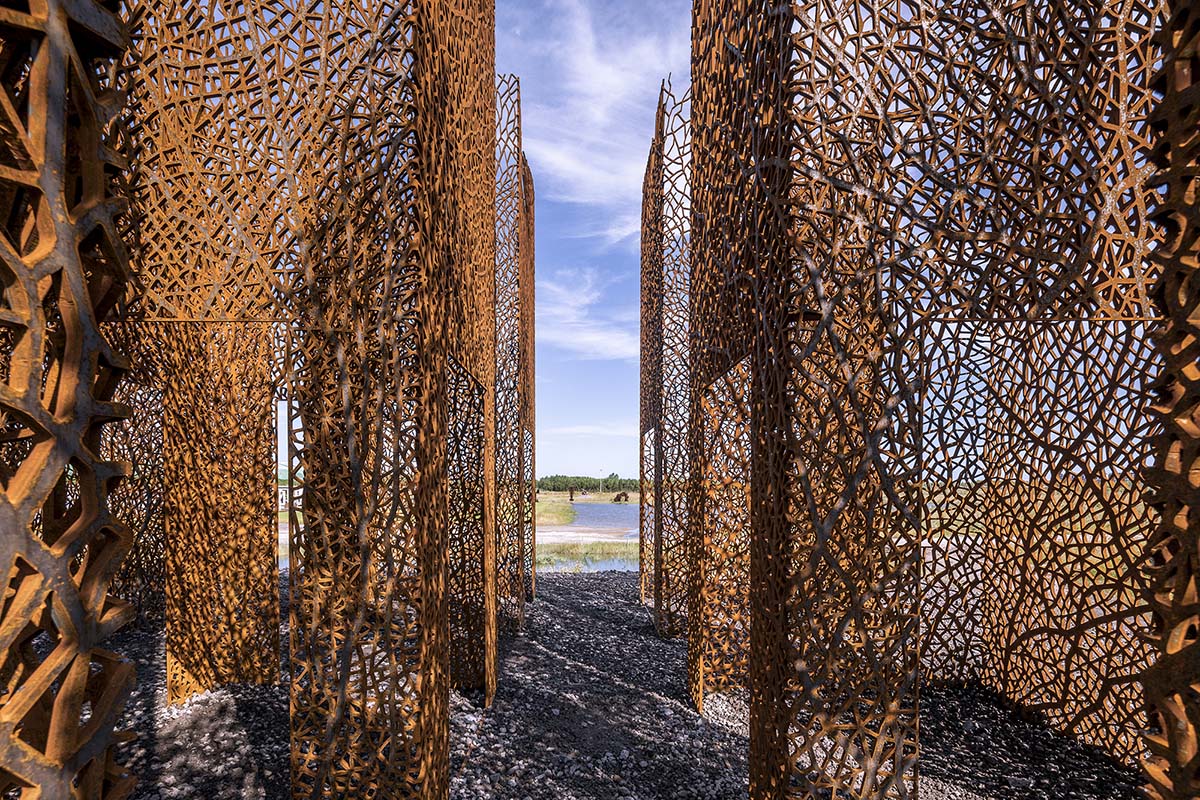 The relationship between the work and the site is important, and the spatial form of the work itself is also essential, but what matters most is the interaction between the work and people. In public art work creation, those three aspects are intertwined, and hence need to be considered in a holistic way.

To endow this work with "expressions", and to enable it to "tell" and convey messages, the chief designer Hu Quanchun put emphasis on materials. The designer thought about how to utilize steel panels and what messages to be conveyed through this neutral material, which to a large extent depends on users' notions and needs. 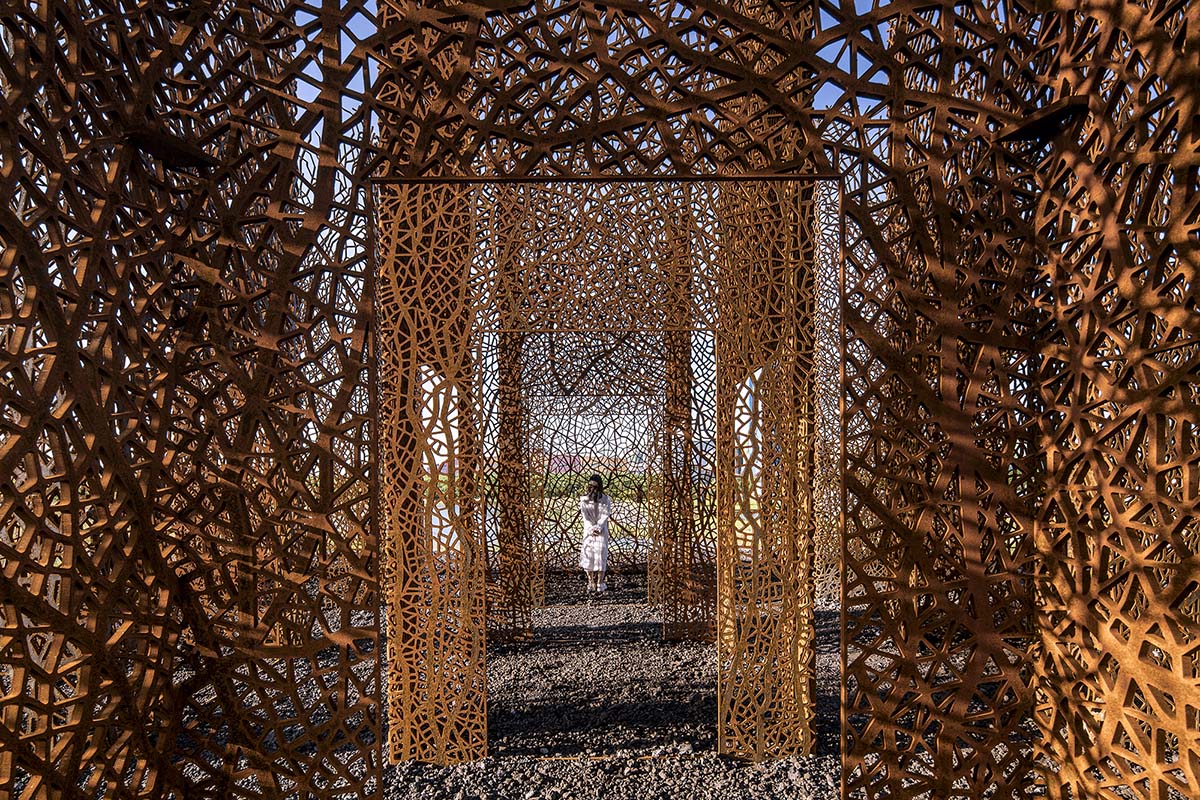 Steel is undoubtedly a symbol of modern industrial civilization, but steel panels often give people an impression of coolness, solidness and heaviness. To let the work present a sense of dailiness and affinity, he decided to give the steel panels a warm, transparent and lightweight feel.

To that end, Hu Quanchun converted solid steel panels into the textures of creeper vines to enclose the column space. To realize that effect, steel panels were treated through a process of laser carving and welding. At first glance, the vines-like pattern may seem to be slightly abrupt on the site. However, in fact its true intention is not for decoration, but to imply the existence of a possible spatial entity. The concept about creeper vines was explored in Hu Quanchun's previous design works. The scene that creepers sprawl on architecture is very frequently seen in daily life. When detaching the architectural body, the growing status of the creepers can still reflect the form of the former architectural space.

Such memory and ambiguity that creeper carries and the imagery of ruins that it evokes are what Hu Quanchun is interested in. This work expresses the status of creepers growing freely on columns. The designer "detached" the dense, solid columns, and left creeper vines' textures to outline the silhouette of the original column space and carry its memory. 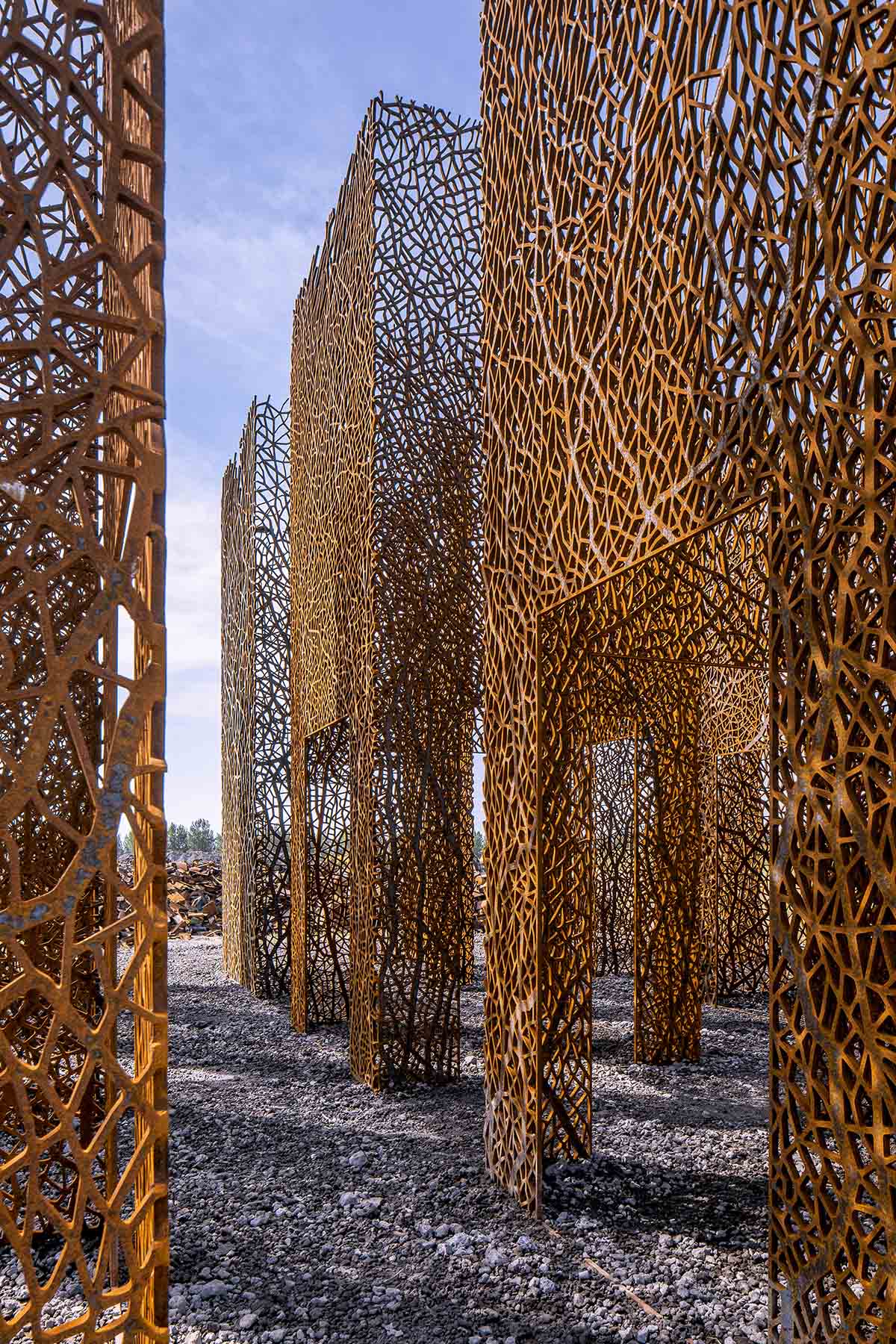 The laser carving process enhanced the transparency of steel panels. The twists, turns and joints of "vines" produce rich spatial layers. To enrich visitors' experience in the column space, each mesh-like column is set with different openings to create diversified circulation routes and sight lines.

When entering the column space, visitors will be immersed into a spatial realm awash with light and shadows. While taking a look at it from a distance, it stands out on the site with its dense volumes that blur the real and the virtual. It presents different visual effects when viewing from different directions or angles, bringing visitors varied experiences. 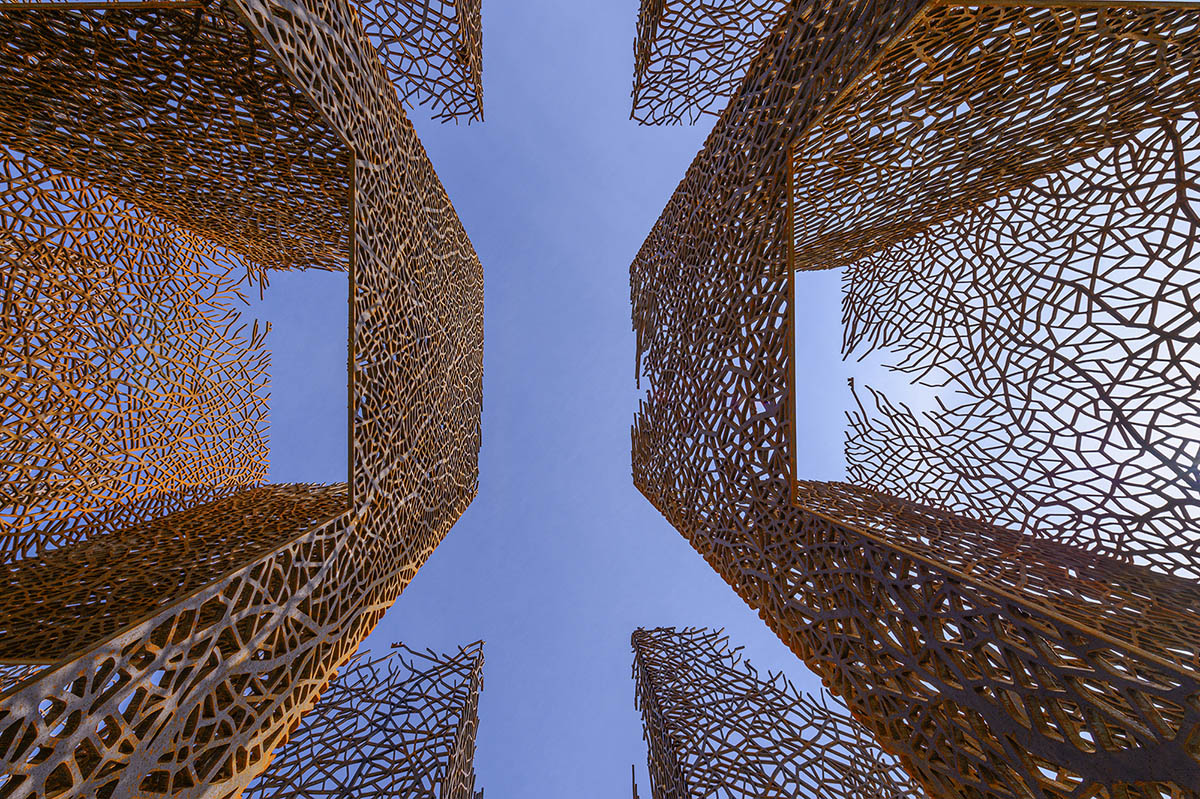 Are the textures and symbols of creeper vines introduced to the site really abrupt? As the tidal-flat wetland is not conducive to the growth of trees due to its saline soil, the introduction of the matrix of columns creates a strong, surreal scene of vines freely growing upwards, which blurs the real and the virtual.

Therefore, the vine patterns which enclose column space are actually a response and echo to the site. 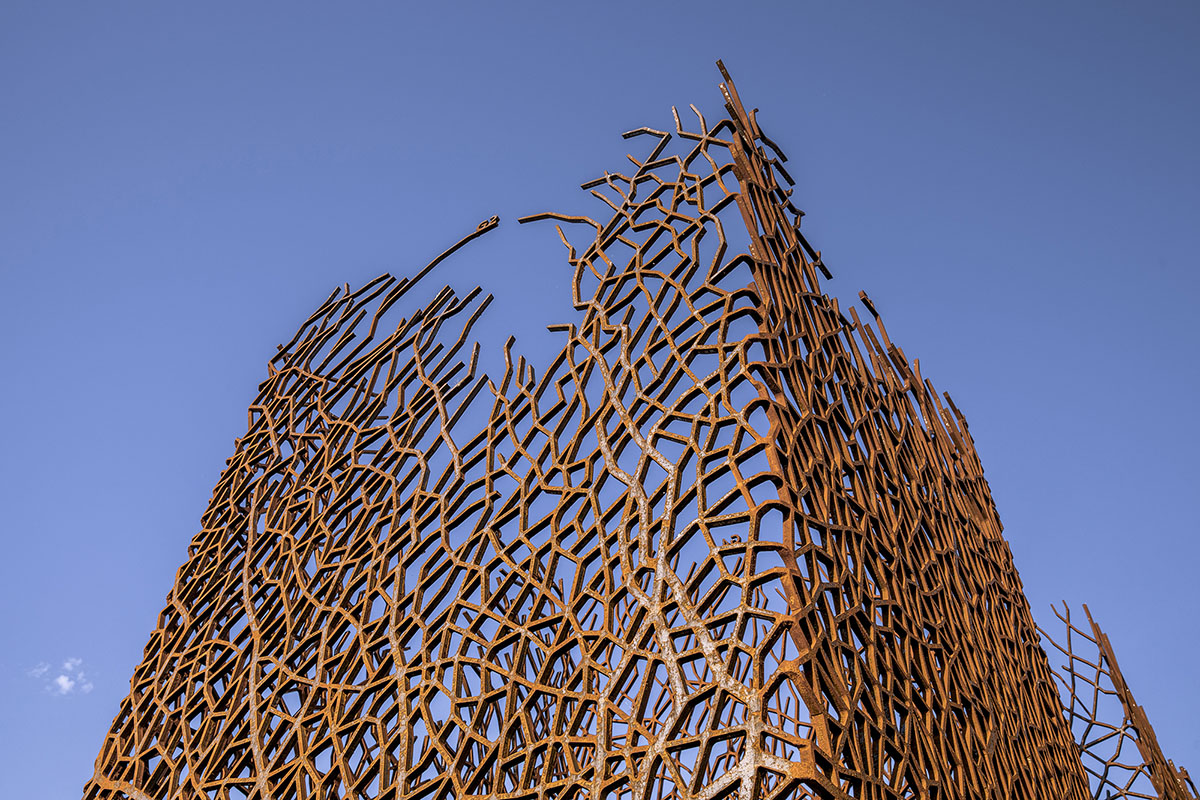 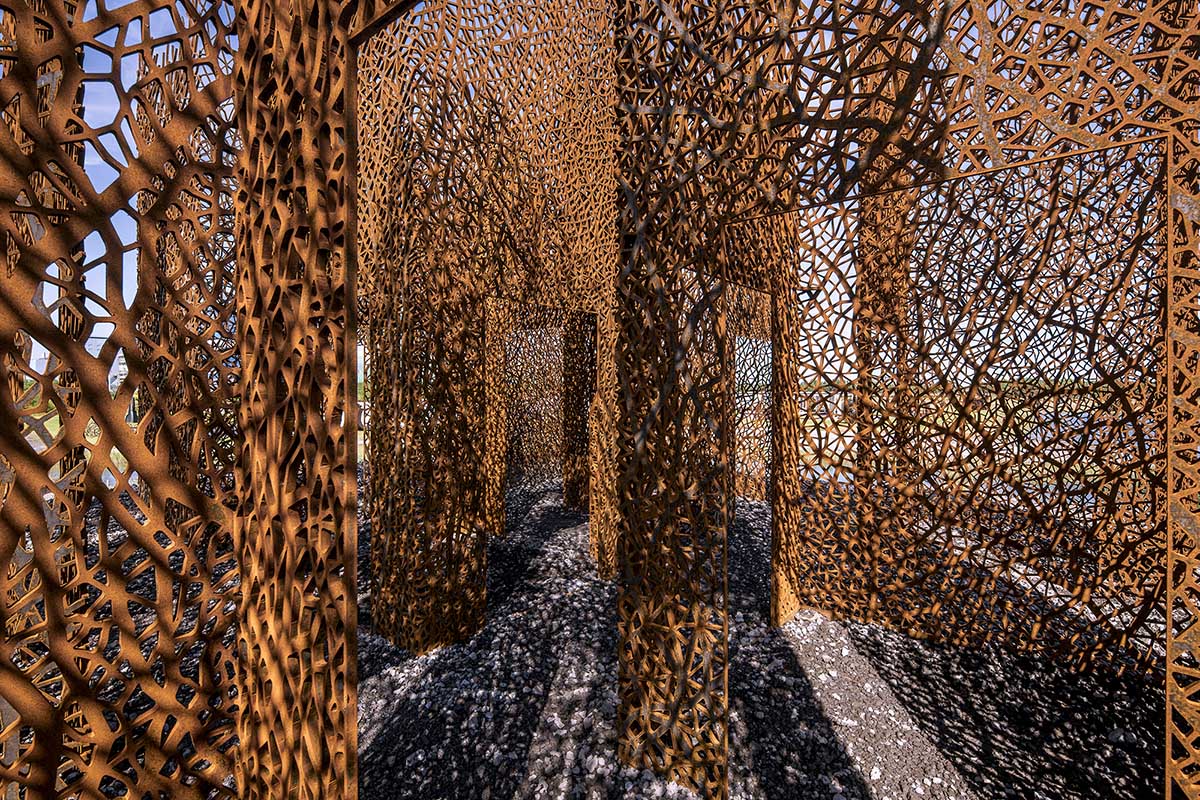 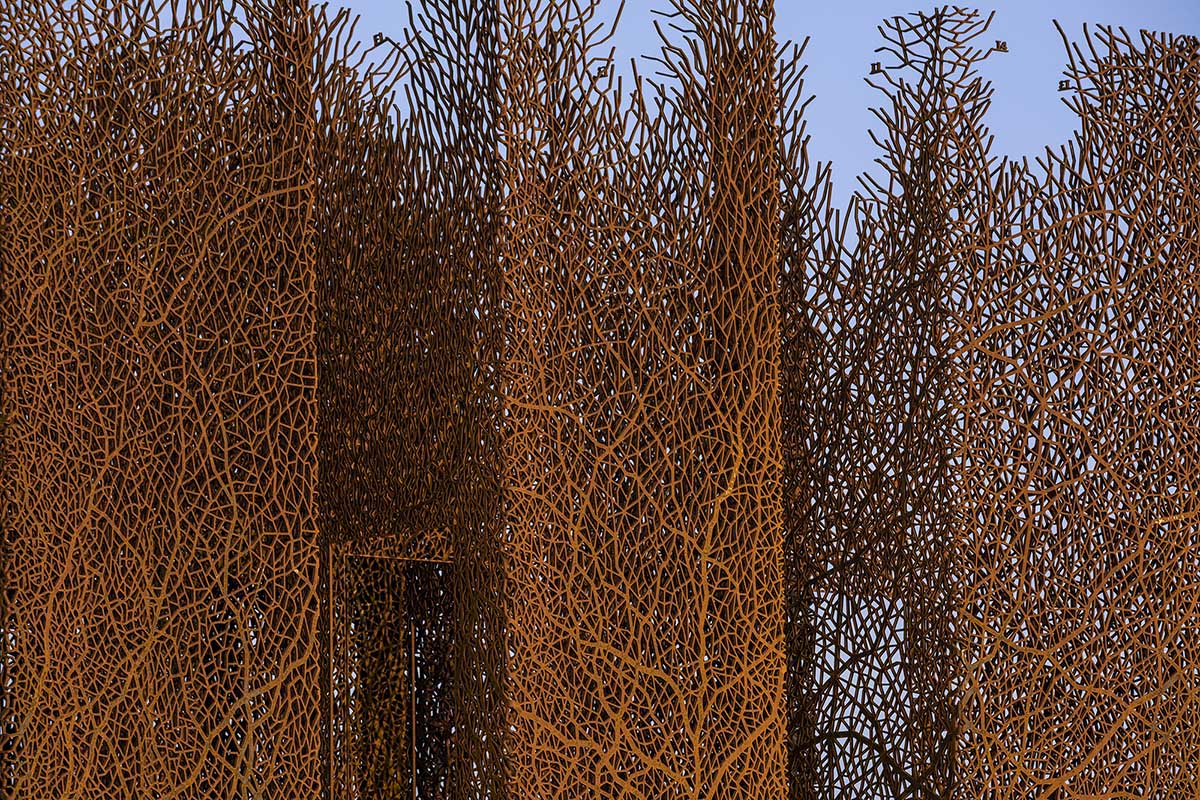 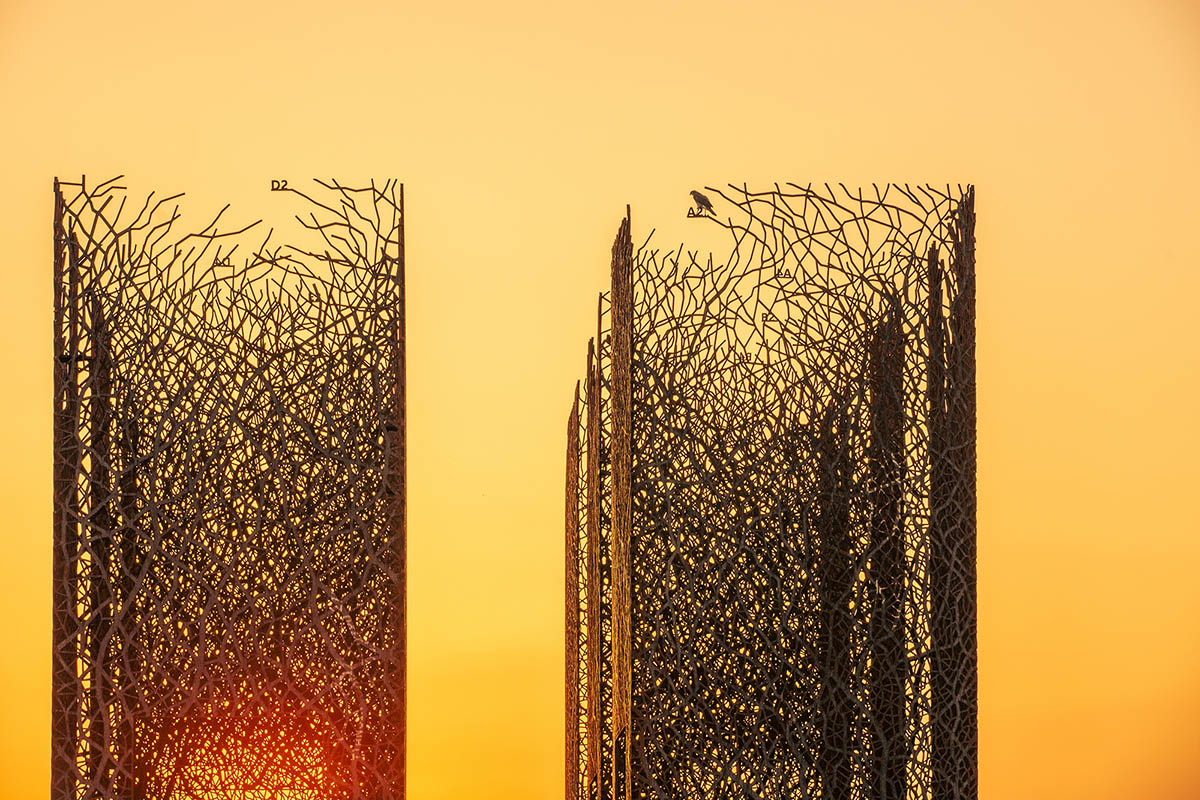 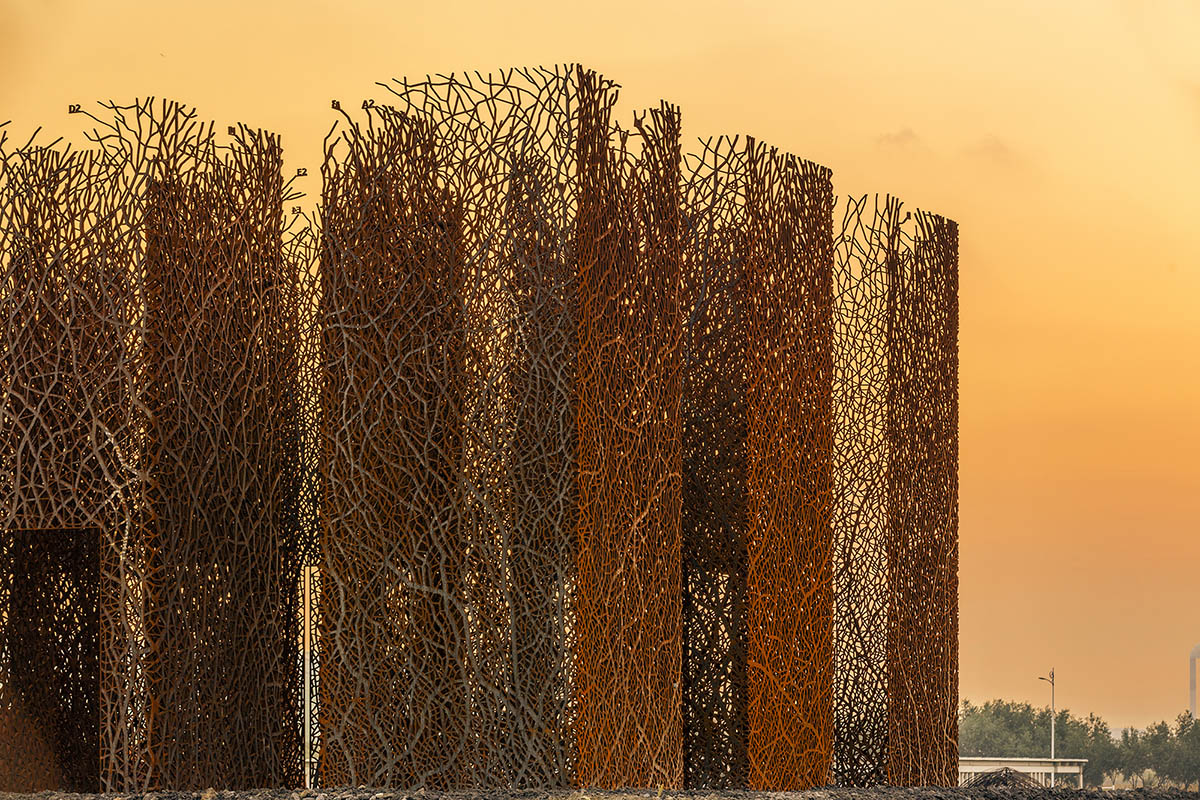 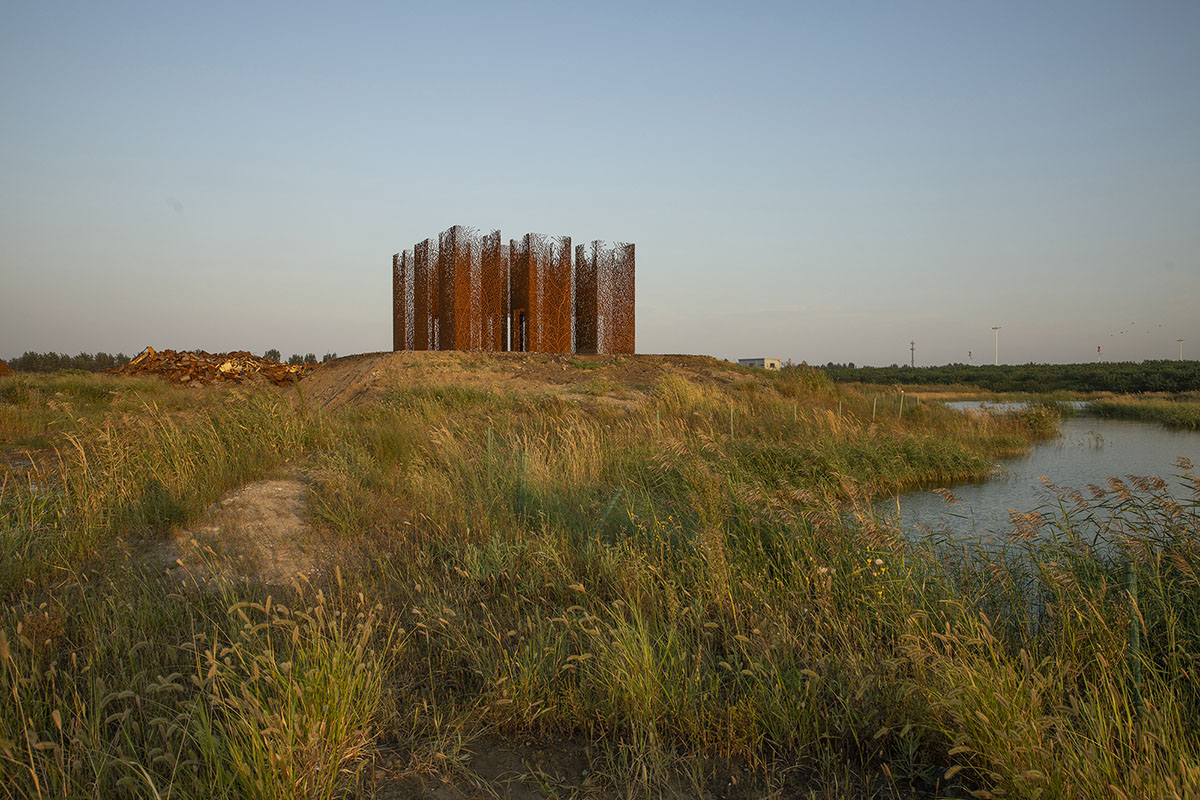 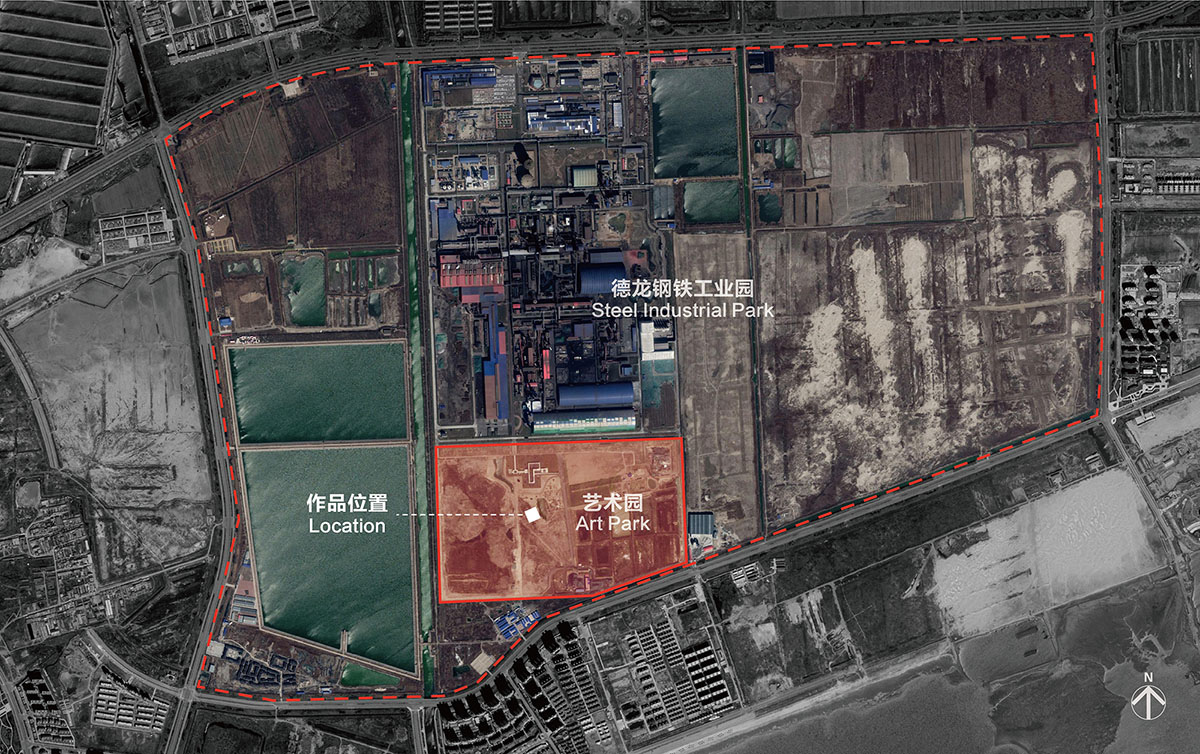 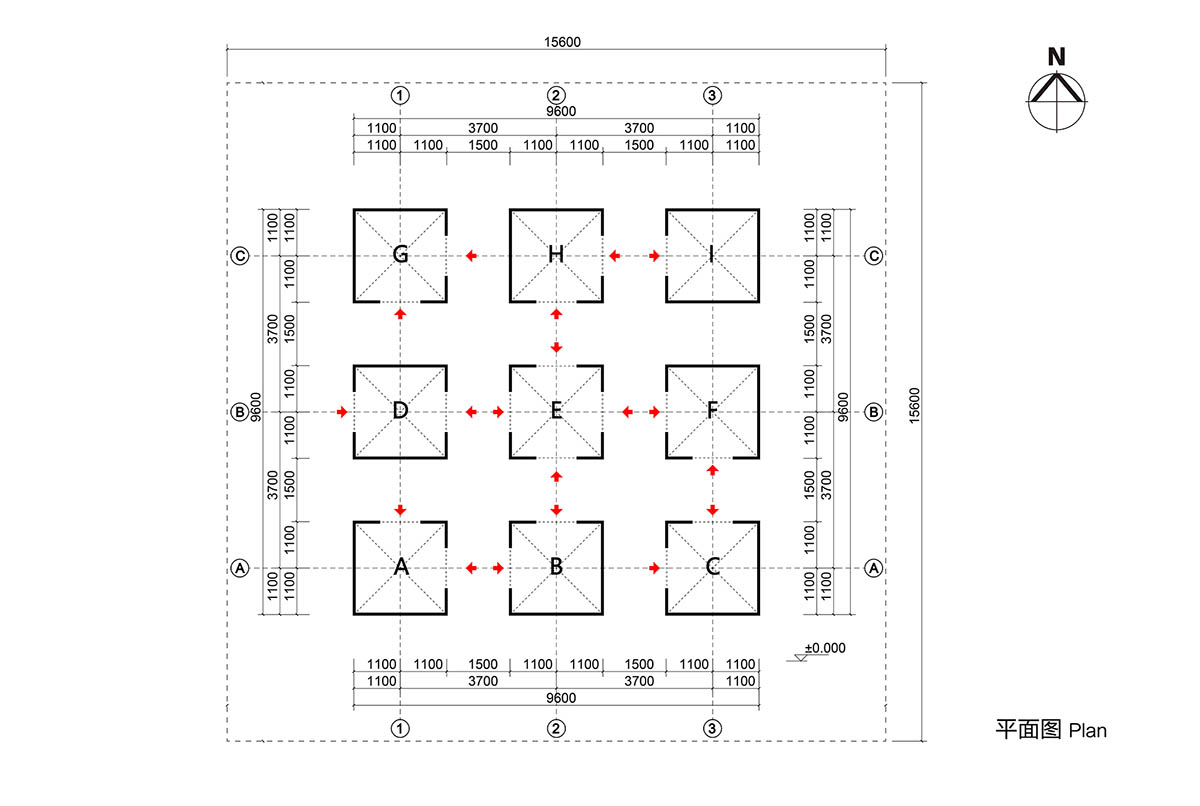 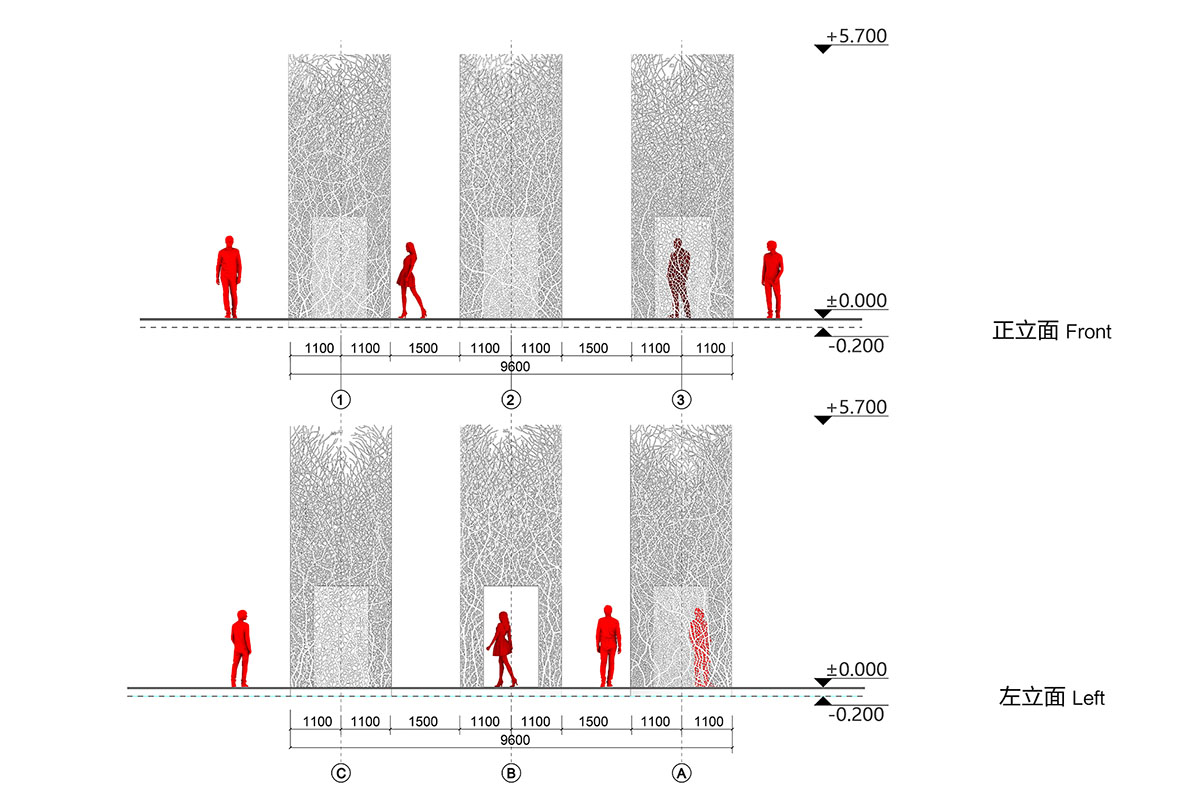