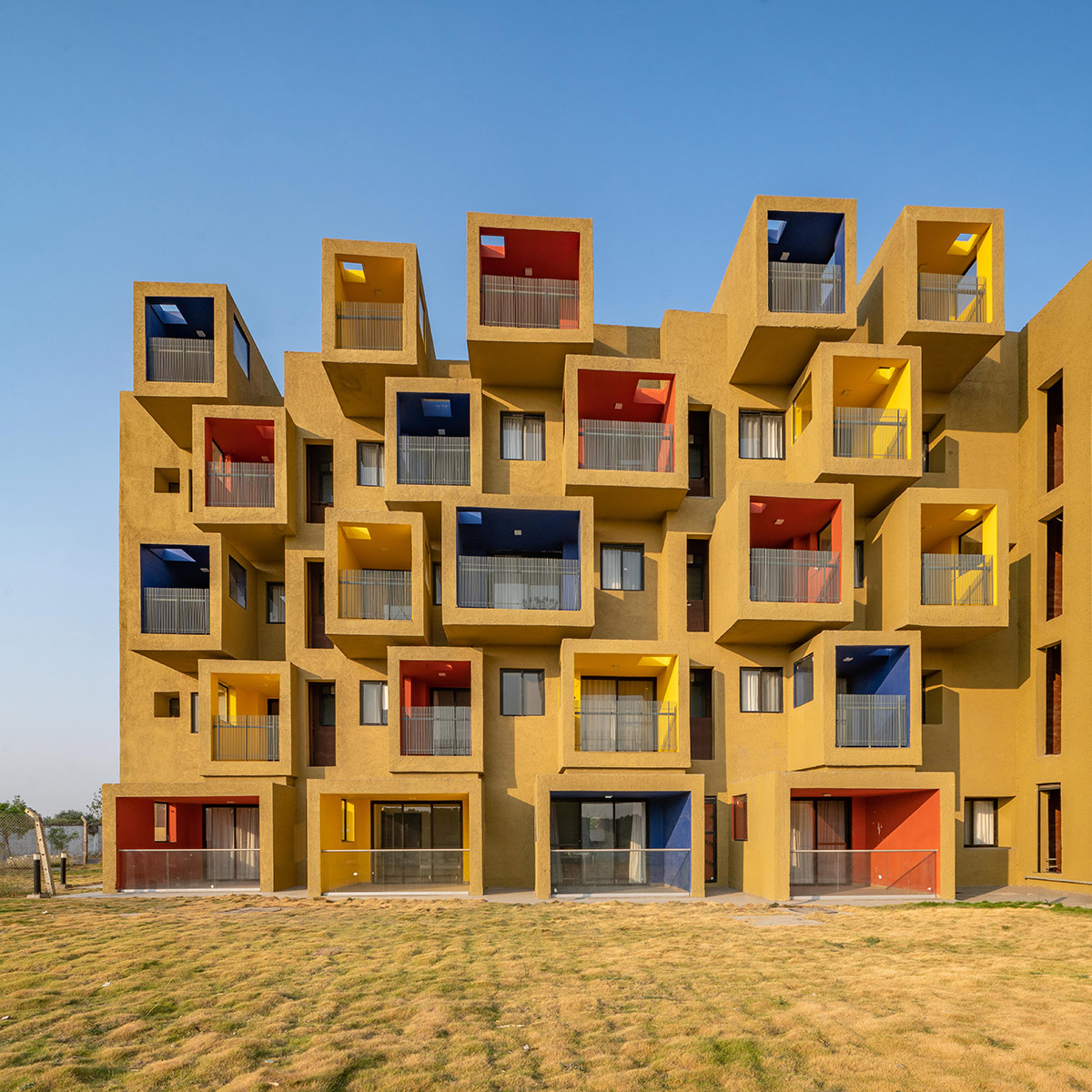 Named Studios 90, the 10,400-square-metre project is located in Kodla, Karnataka in India. Kodla is known for its tropical savanna climate, in which city's temperatures exceed 35°C for 8 months of the year in this region.

The firm designed each of the rooms in the plan by cascading angularly and orientated the rooms to the north in response to Kodla's hot climate.

Studios 90 is competing in the WA Awards 40th Cycle in Realized category to be the winner of this Cycle. WA Honorary Members and previous cycles' WA Awards Winners and WA Community Members, who have at least 1 project that was uploaded 1 month ago in their WAC pages, may go ahead and click here to Vote for their preferred projects by Sunday, 10 April (23:59 GMT +0). 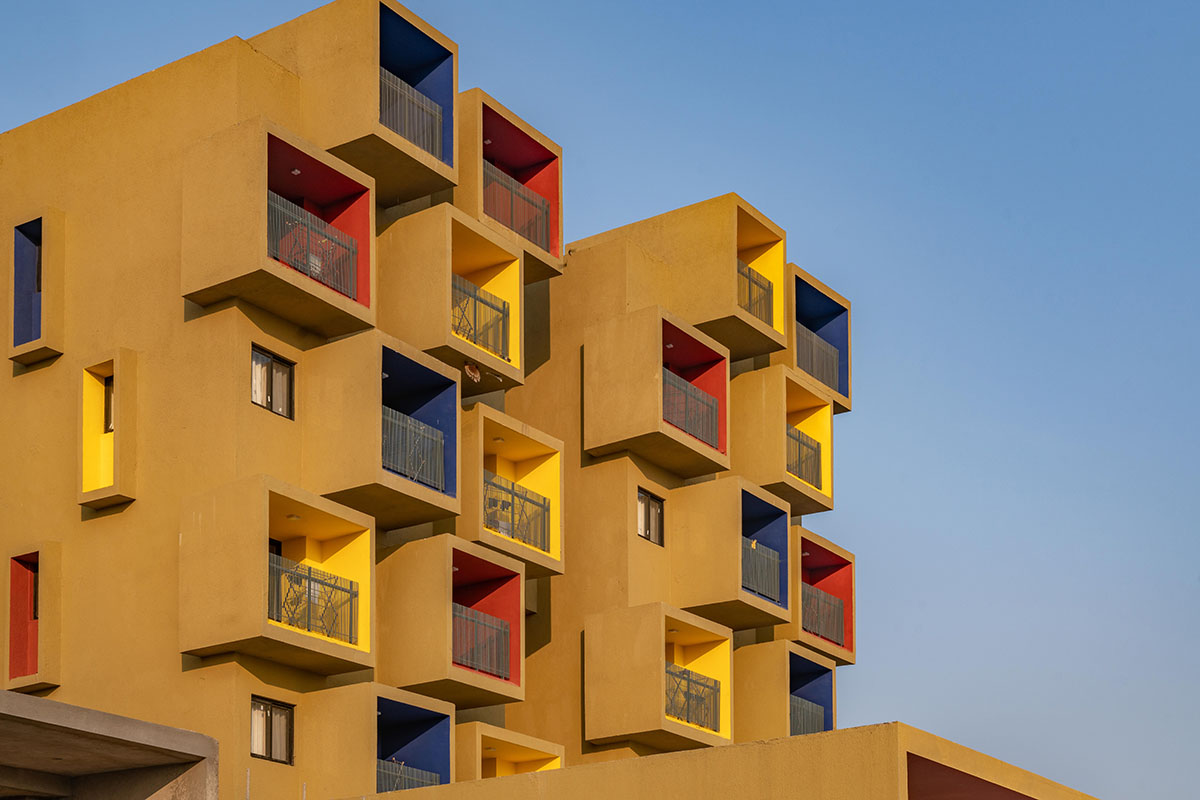 Studios 90 is part of a larger masterplan, which includes a school, a playground, a clubhouse and a temple. The composition is divided into four blocks on the North side.

The blocks are scattered side by side depending on their programmatic functions such as Studios, Guest House and Hostel. 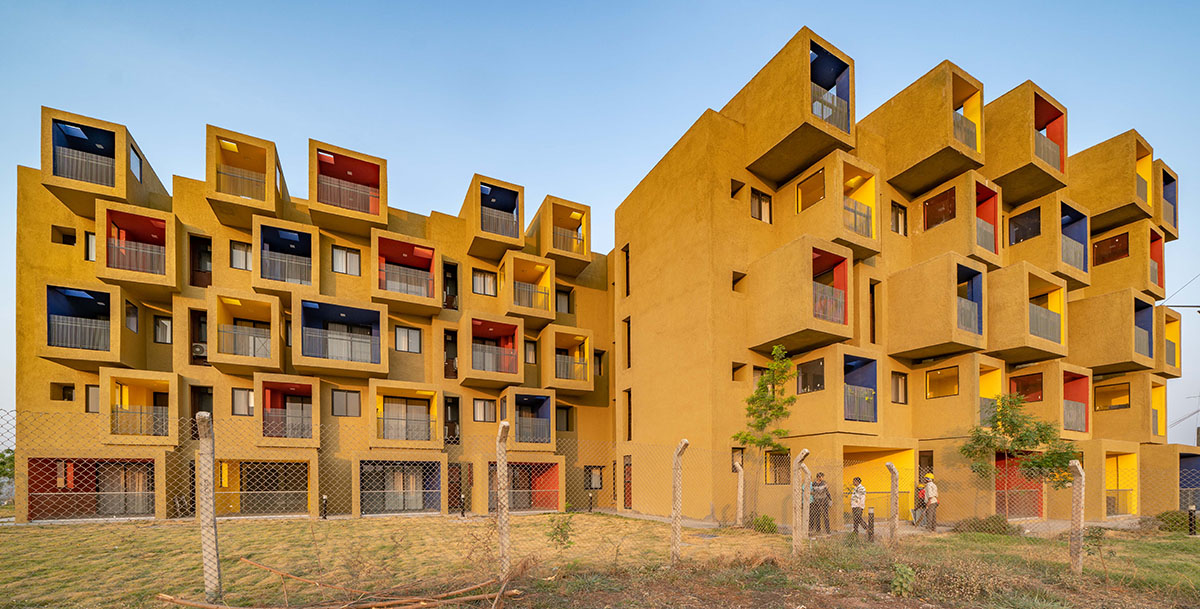 "The brief for these mid-rise buildings was to create studio apartments, a hostel & a guest house on the perimeter of a housing project for a residential township, to house the working people of a new cement plant," said Sanjay Puri Architects.

Based on the brief, the firm has created a massive composition made of coloured cuboids which form a sculptural residential building. Thanks to the variations of colors, the orientation of terraces are easily perceived from afar. 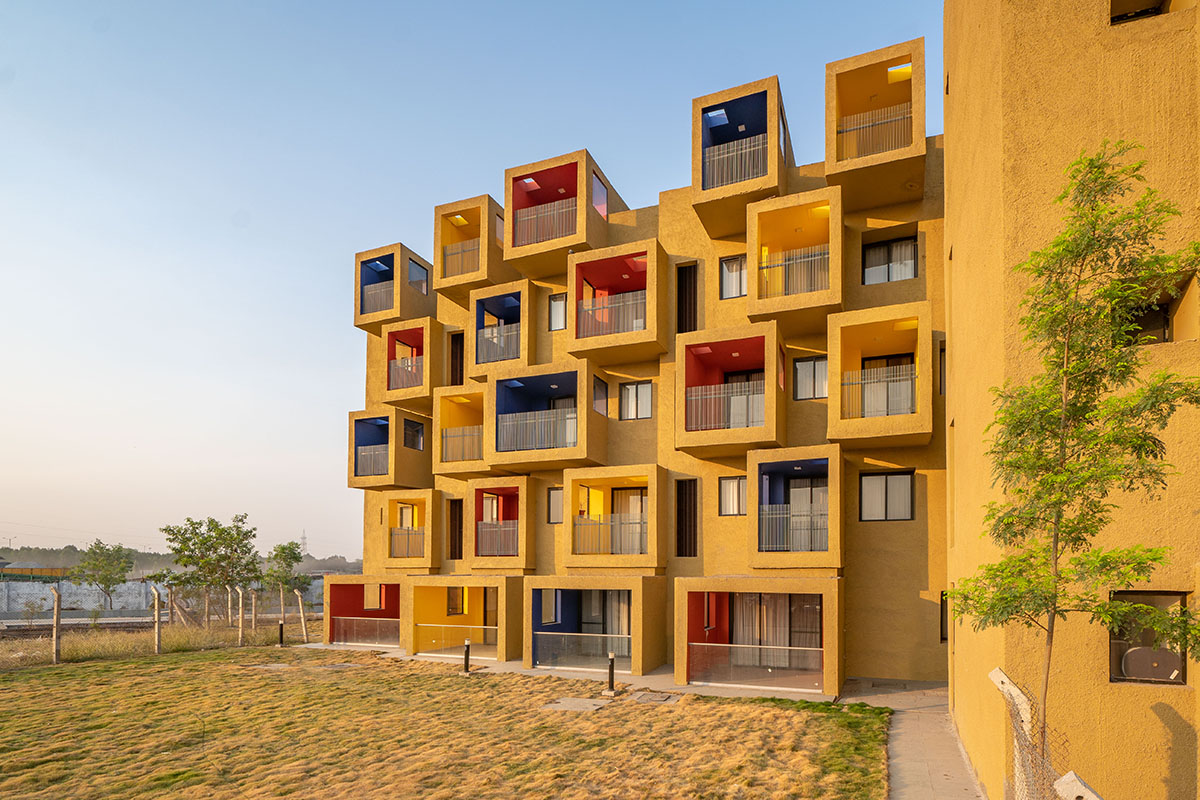 The project consists of 18 studio apartments, 54 hostel rooms and 18 guest house rooms that are placed in four and five level buildings facing large landscaped areas and a large playground on the north east. 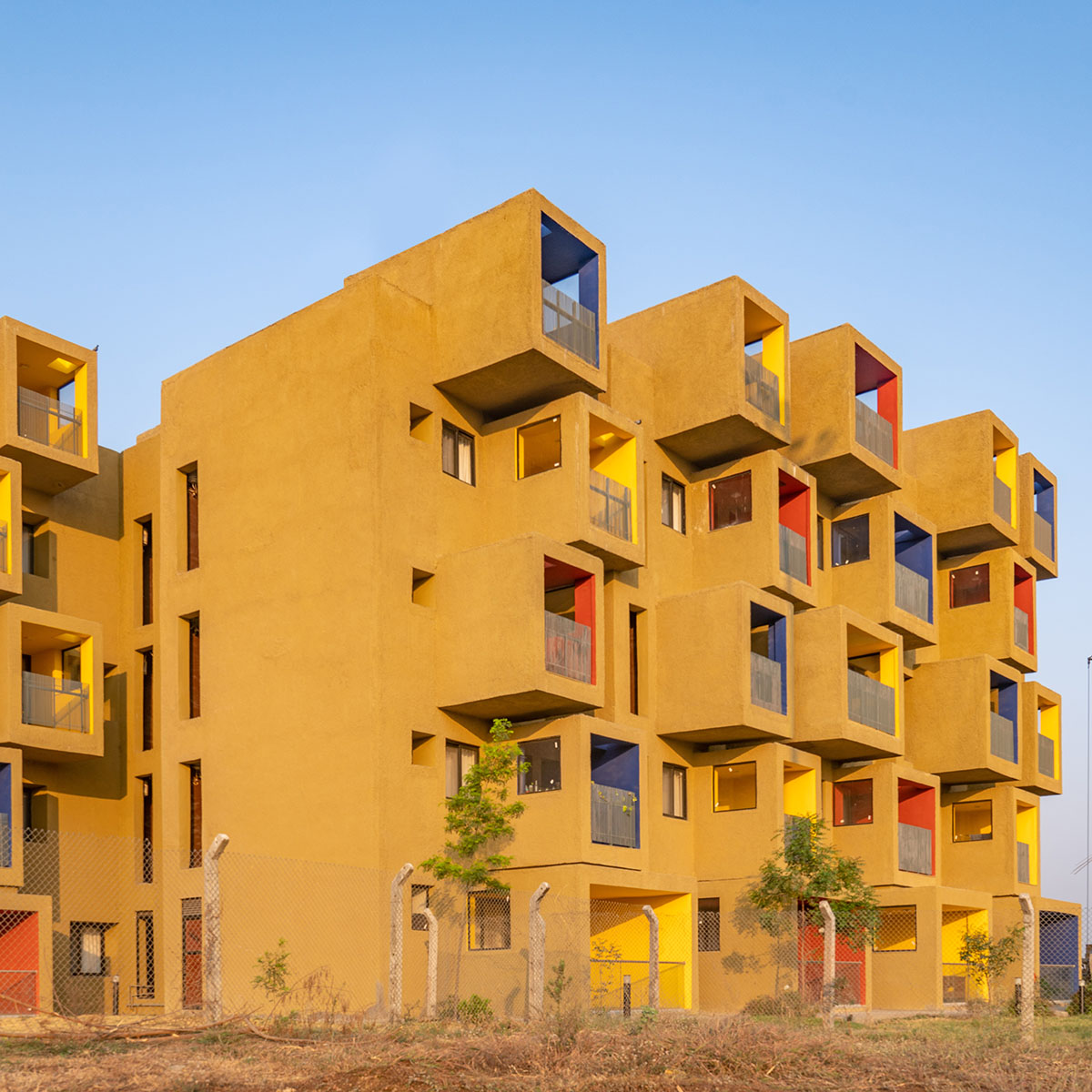 In the project, the office explained the reason of choice of three main colors in façades and said that "Indian culture is known for its vivid use of color in traditional crafts, festivities & clothing."

"India is the only country that celebrates Holi, a festival of colour annually," the office added.

Sanjay Puri Architects used three vivid primary colors – red, blue and yellow as they highlight the cantilevered balconies to each room creating an identity and simultaneously enhancing the sculptural look of the buildings. 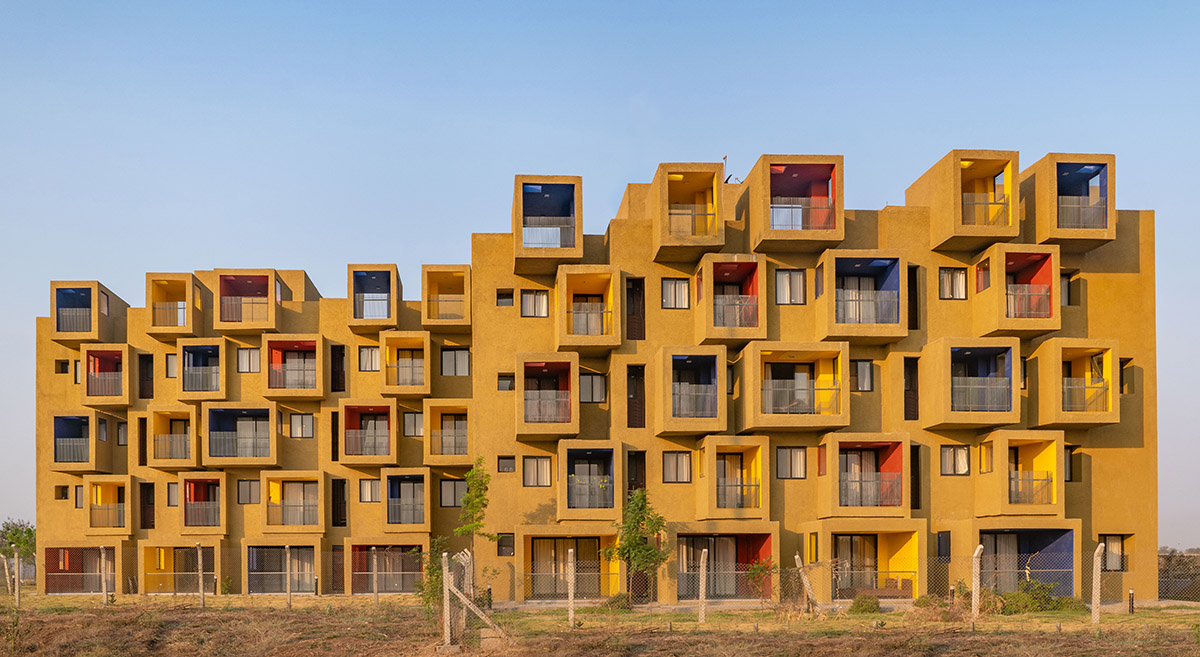 As the office emphasized, the project was built in an economic way and uses natural ventilation and natural sunlight, the buildings are very energy efficient. 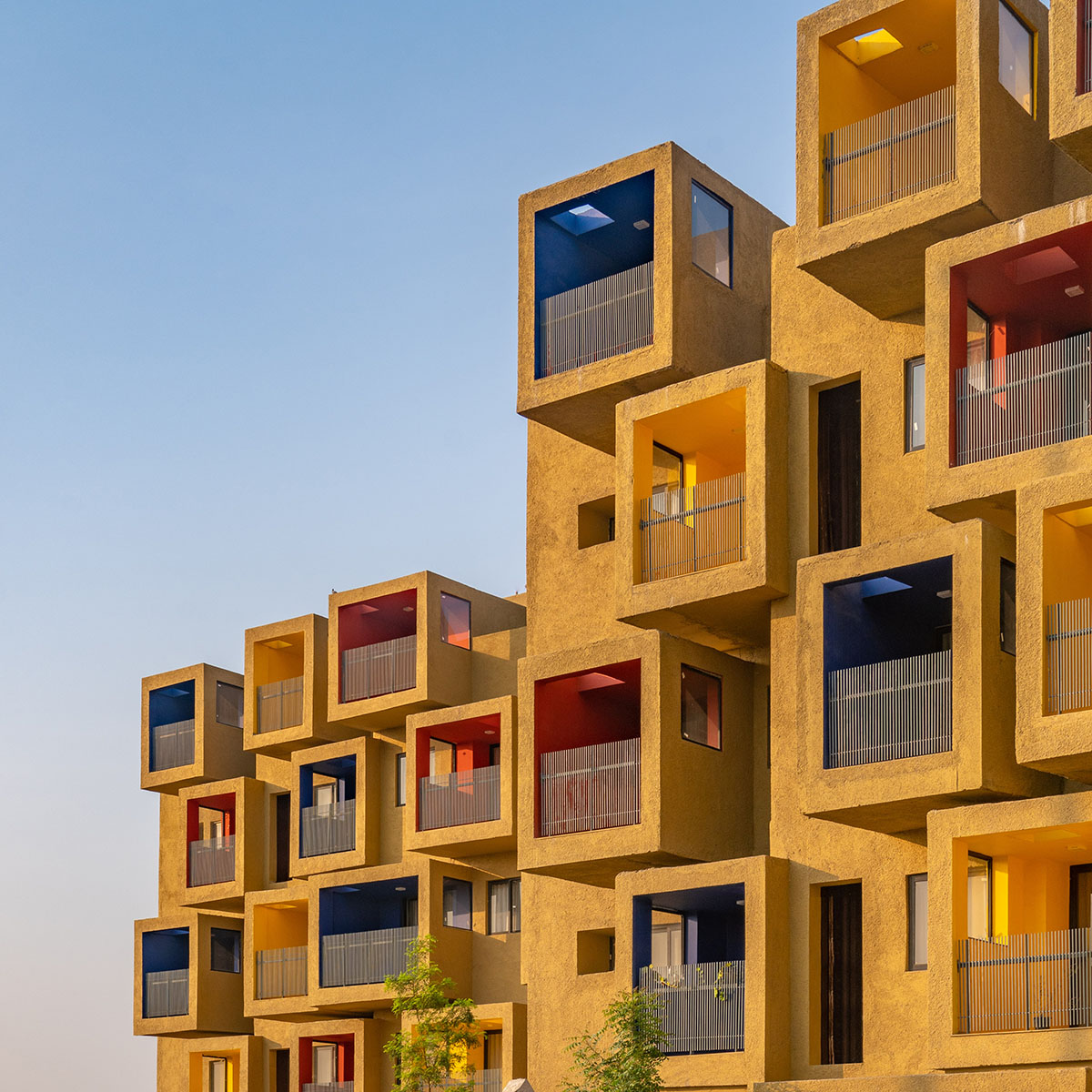 The entire electrical energy required is harnessed from the residual energy generated in the cement plant nearby. 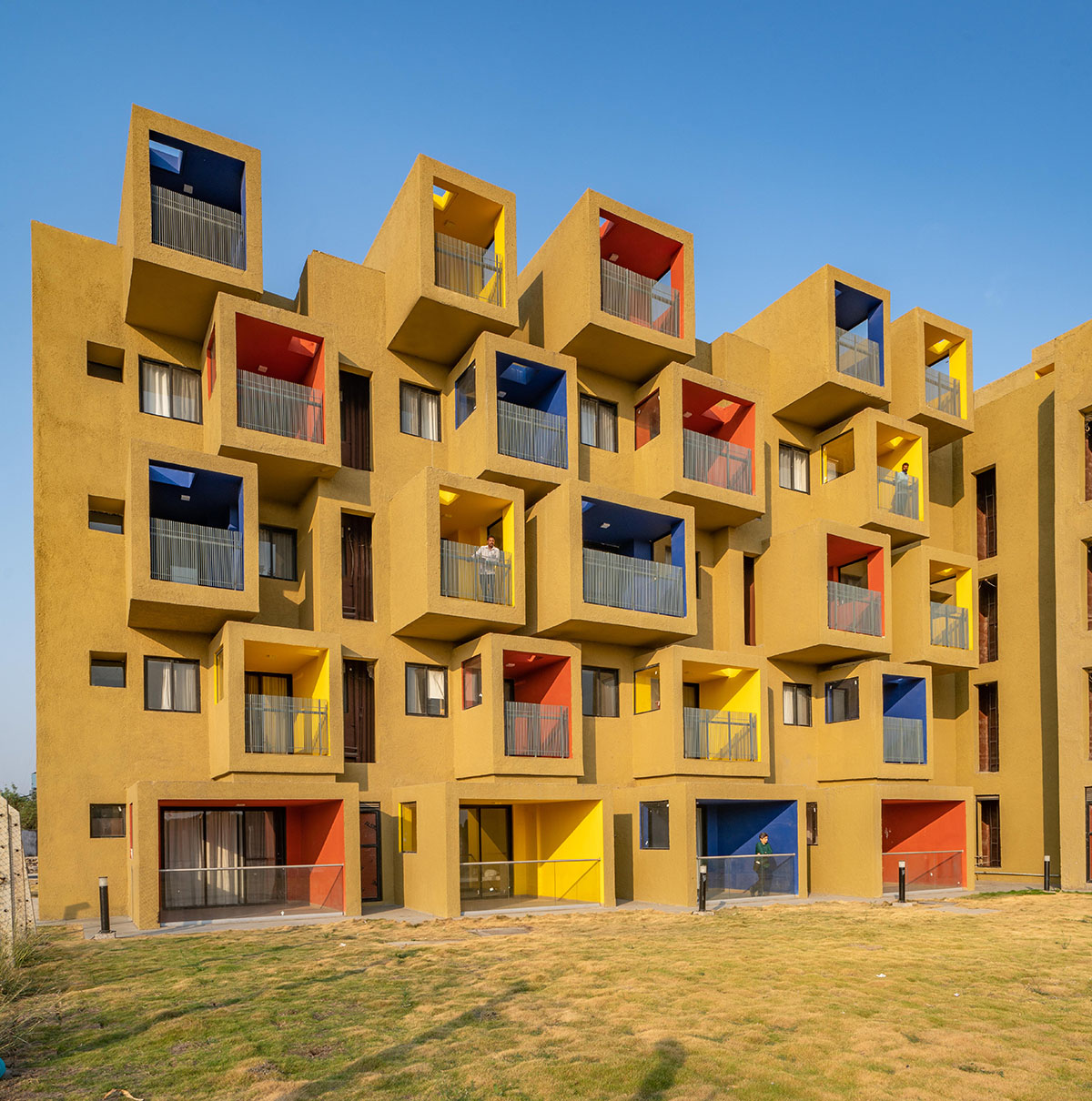 "Studios 90 is a simple, energy efficient residential building that responds to its site, the climate of the location & alludes to the culture &  social aspects of the users," the office added 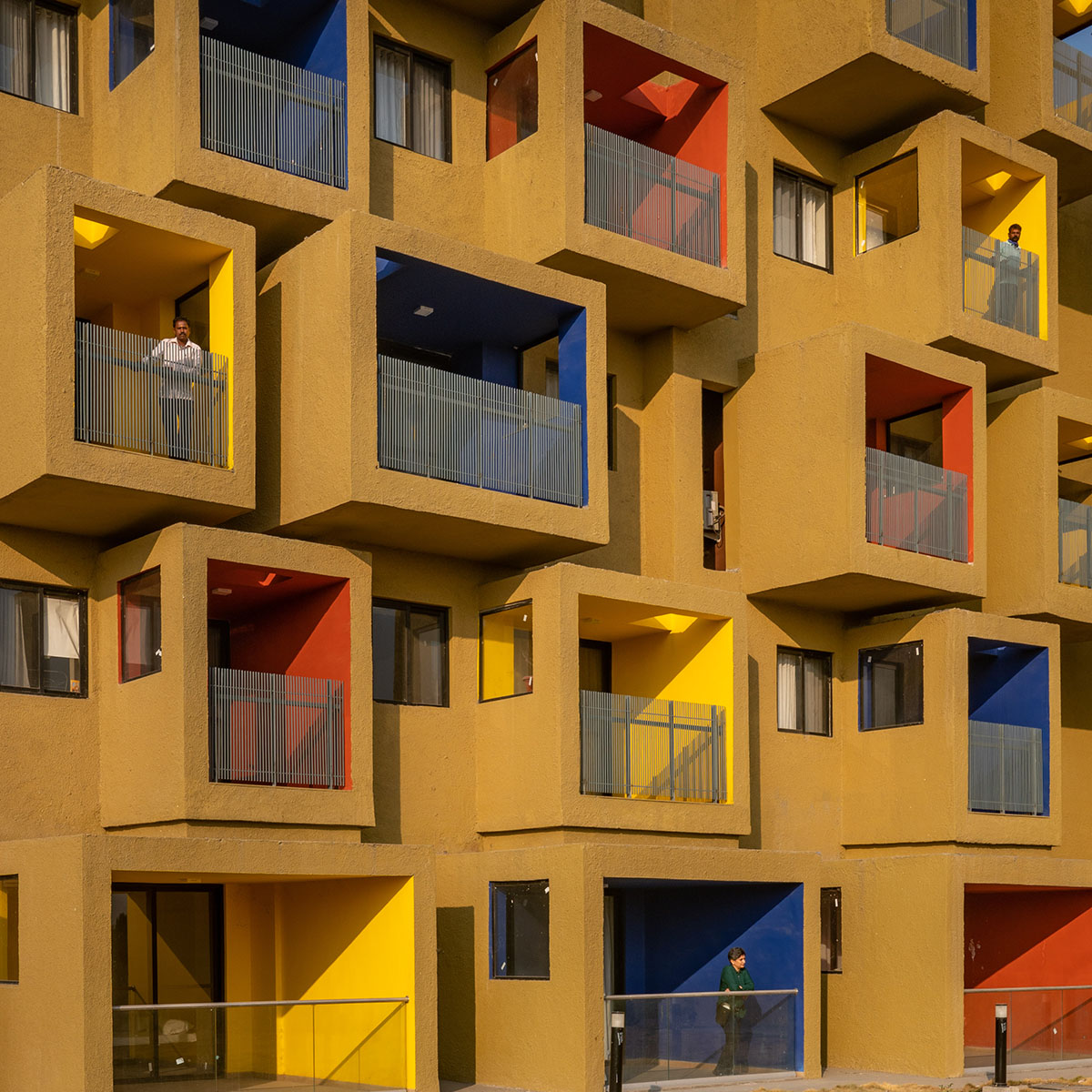 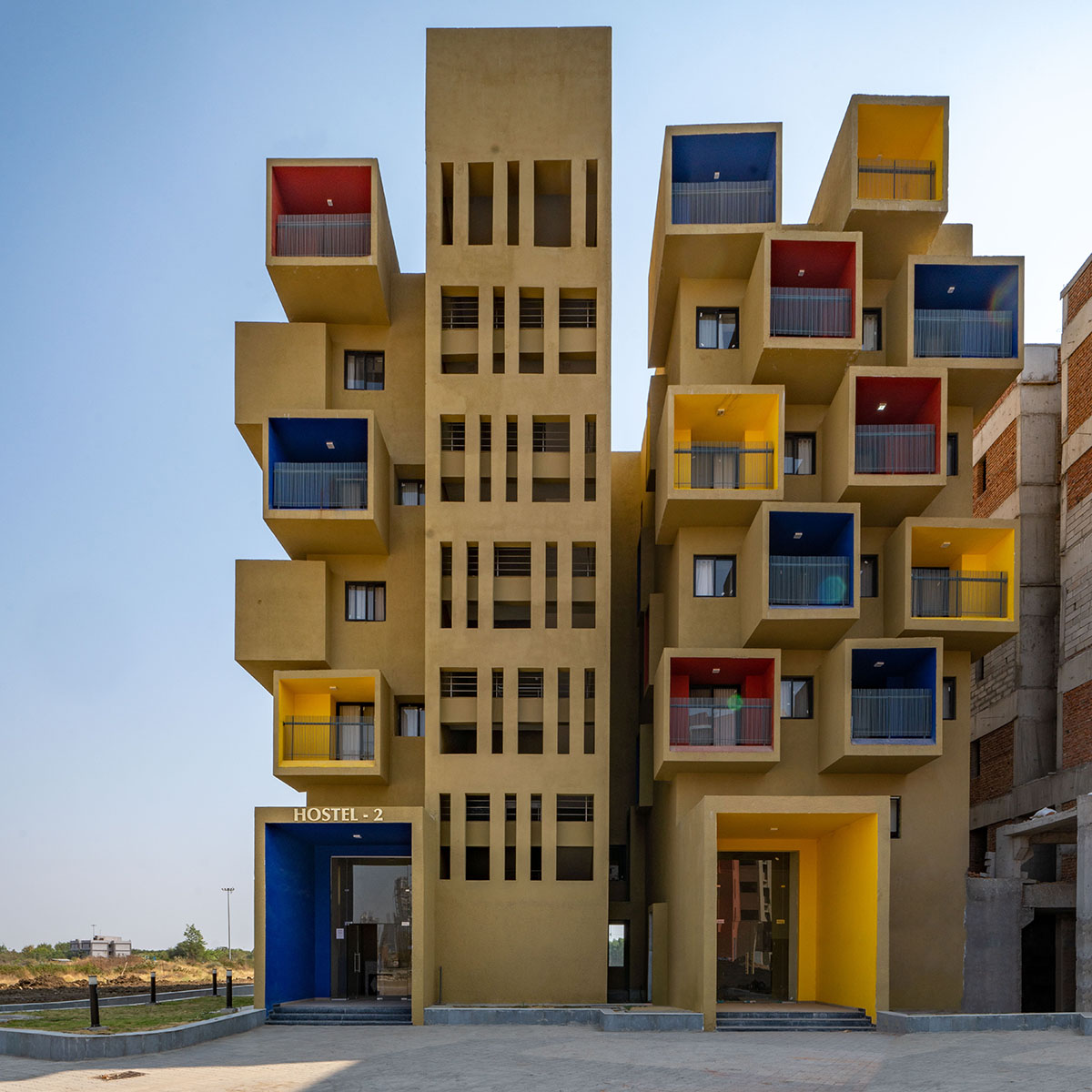 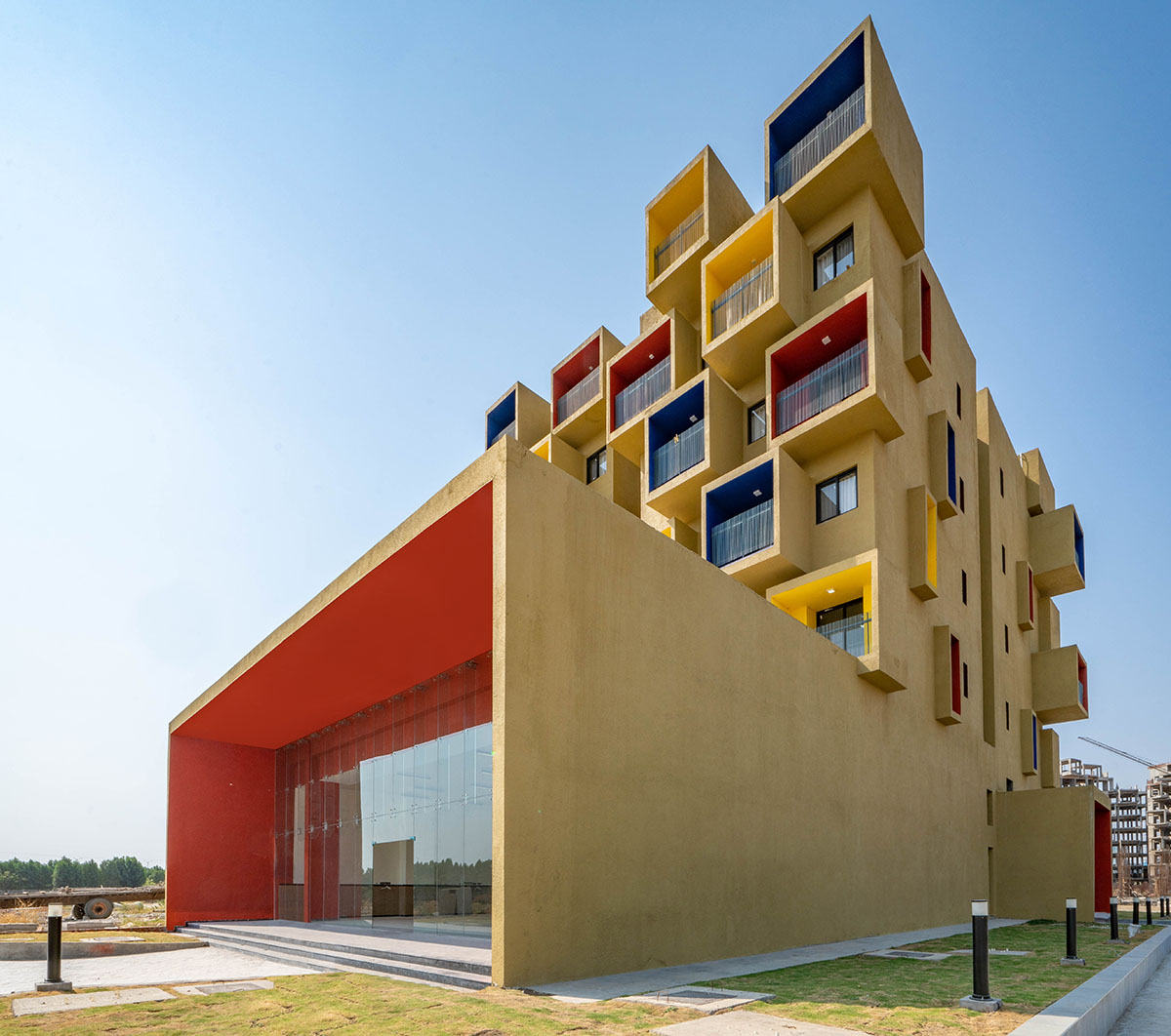 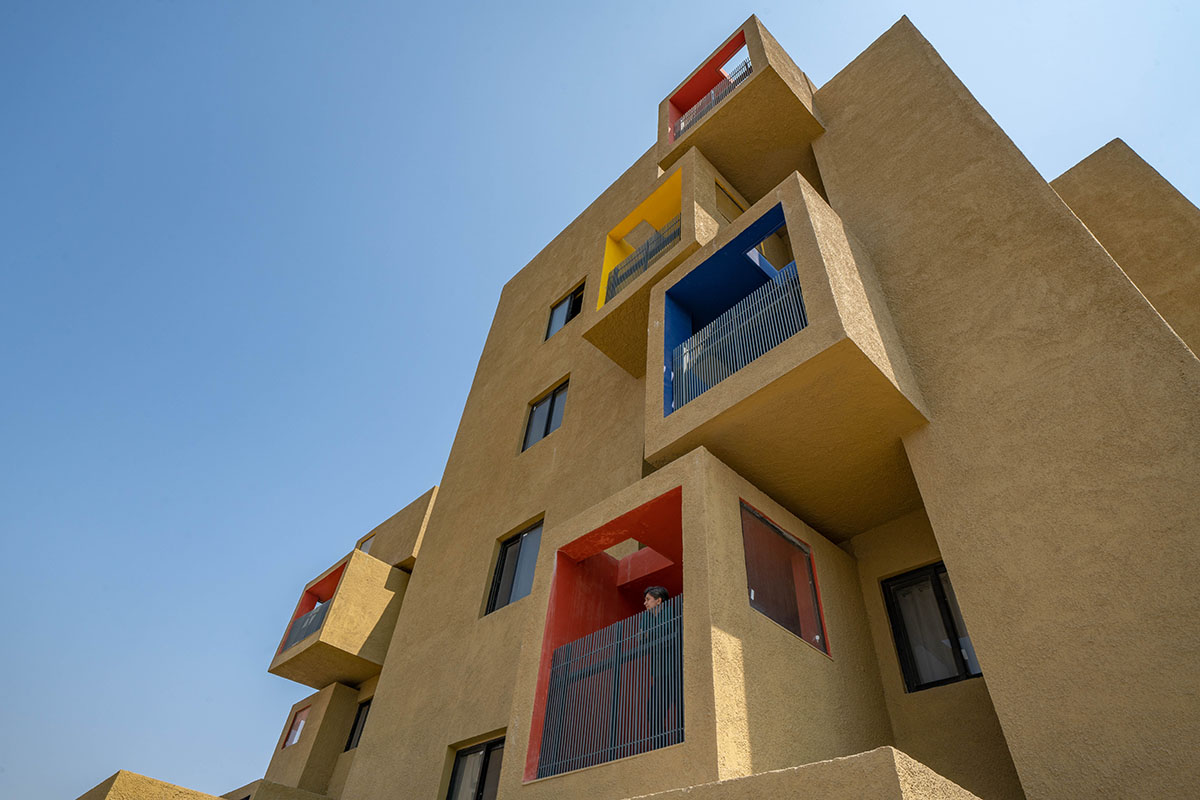 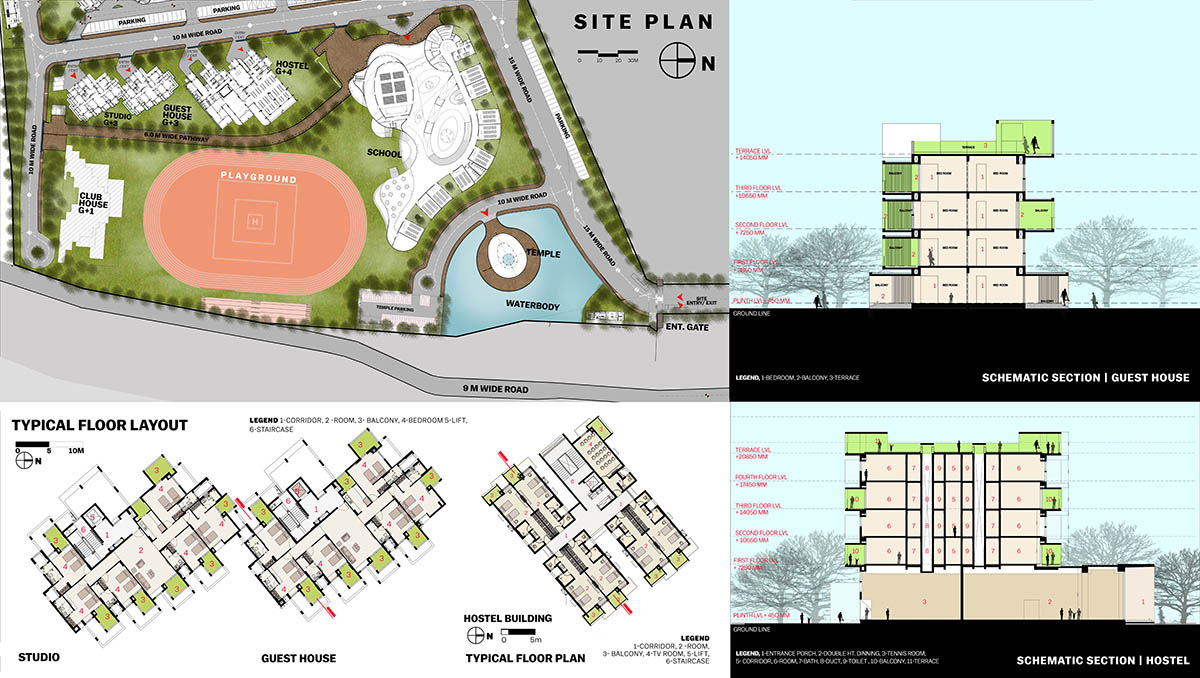 Name of the Project: Studios 90