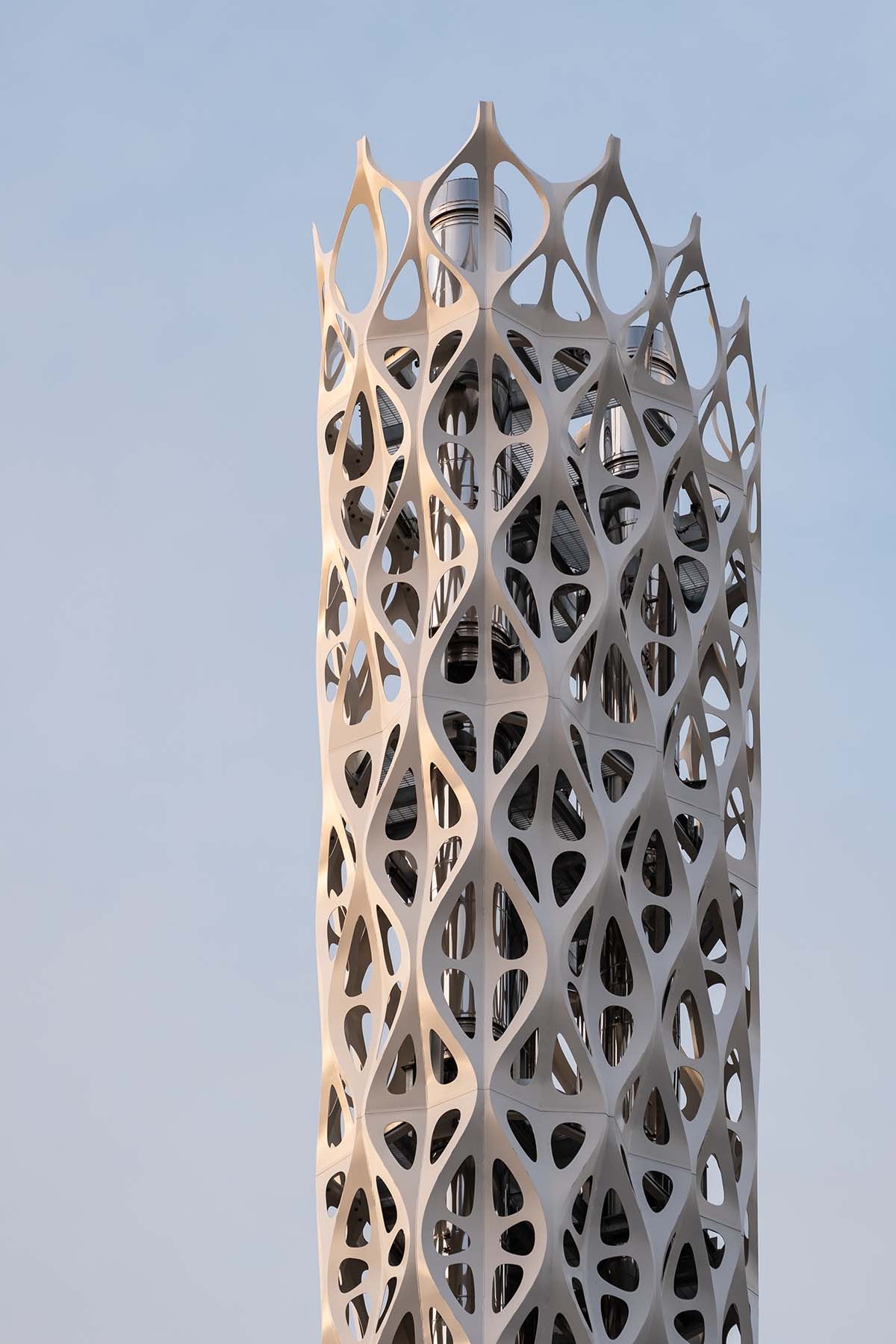 Called Tower of Light and Wall of Energy, the 40-metre tower, designed based on the principles of biomimetic architecture, has emerged as a result of a decade-long innovation and research to create this intricate tower. The 349-square-metre new energy centre was opened in February 2022 in Manchester’s historic district. Tonkin Liu won a competition for a combined heat and power centre in 2017.

The tower, used a chimney of the centre, takes cues from the natural geometries of nature and creates intricate pattern to strength the tower itself.

The tower consists of a super-light, super-thin single-surface structure that uses the least material to achieve the most.

The tower is built from 6 and 8mm thick flat steel sheets, in which all of them are tailored, laser-cut, then welded together to create a curved stiff strong surface. 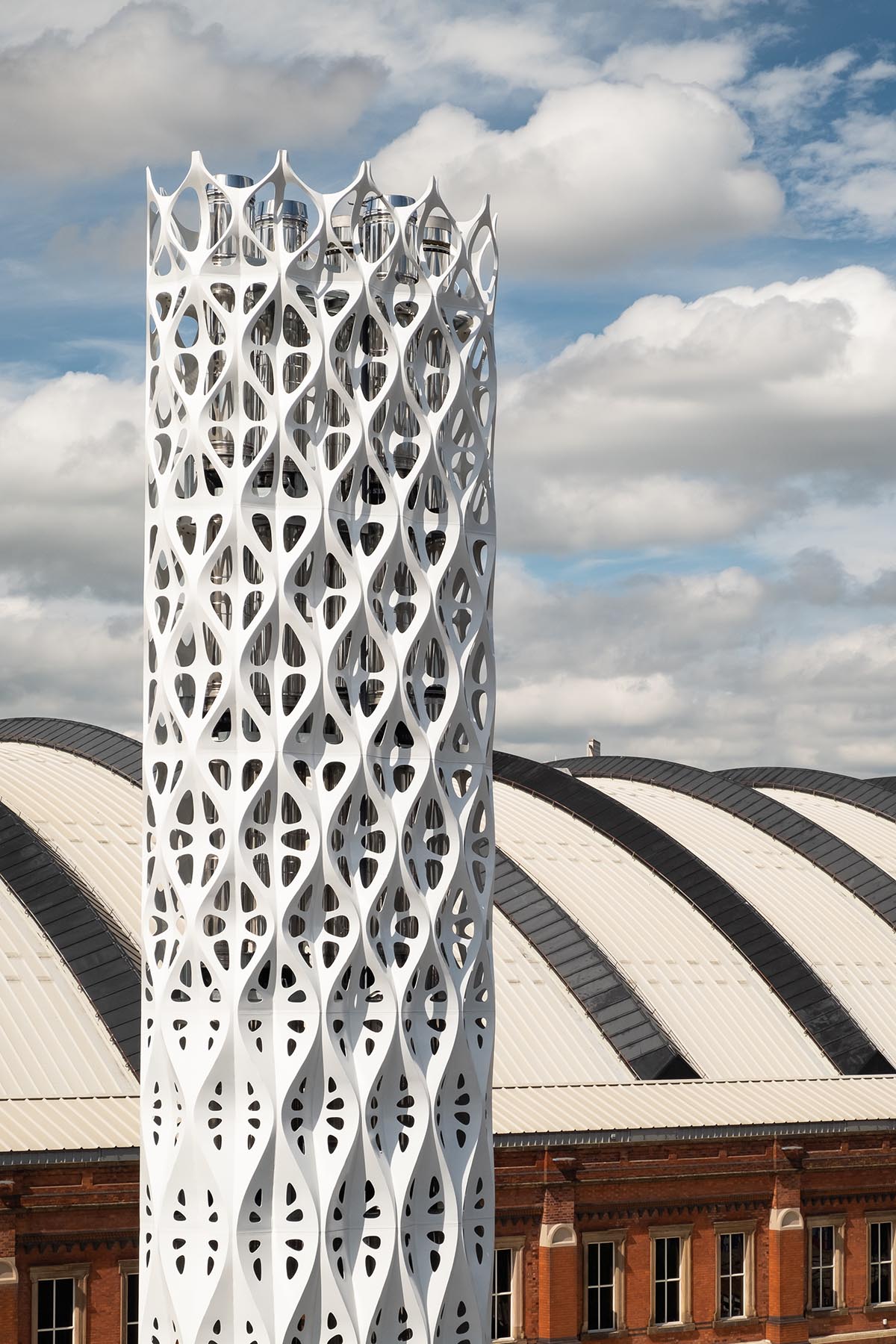 The Wall of Energy's façade features glazed ceramic tiles to help reflect light and movement from the clouds in the sky and the hustle and bustle of pedestrians and cars on the streets.

Tonkin Liu said that "The tessellated interlocking lozenge tile pattern evokes the dynamic energy of earth’s movements, as seen in patterns left in the sand by ocean waves." 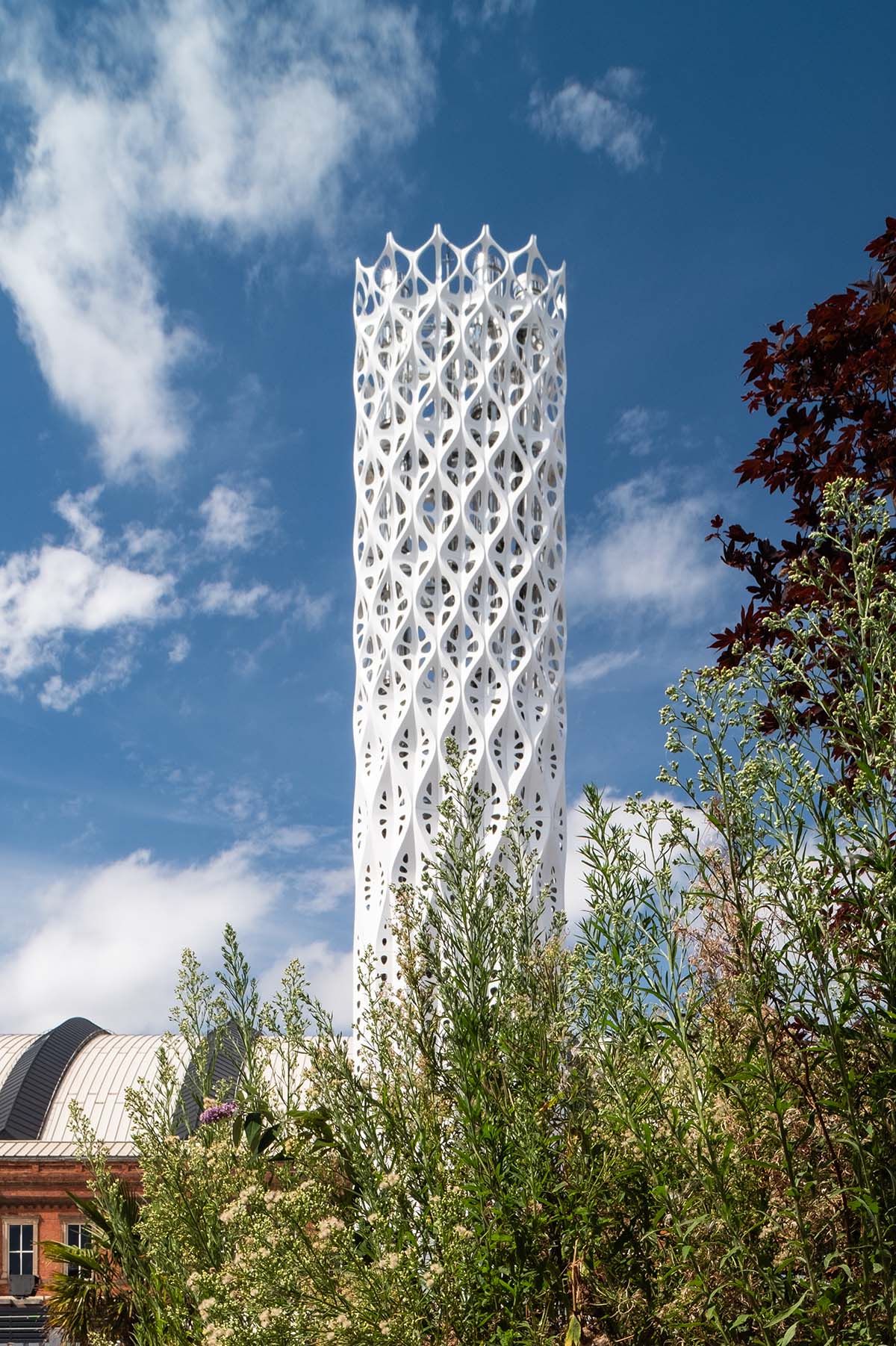 The studio uses 31 different tile types to be able to produce undulations that increase in height, across a total of 1373 tiles.

Contained within a structure inspired by nature, the technological working of the new energy centre hall can be viewed through a long ribbon window from the street. 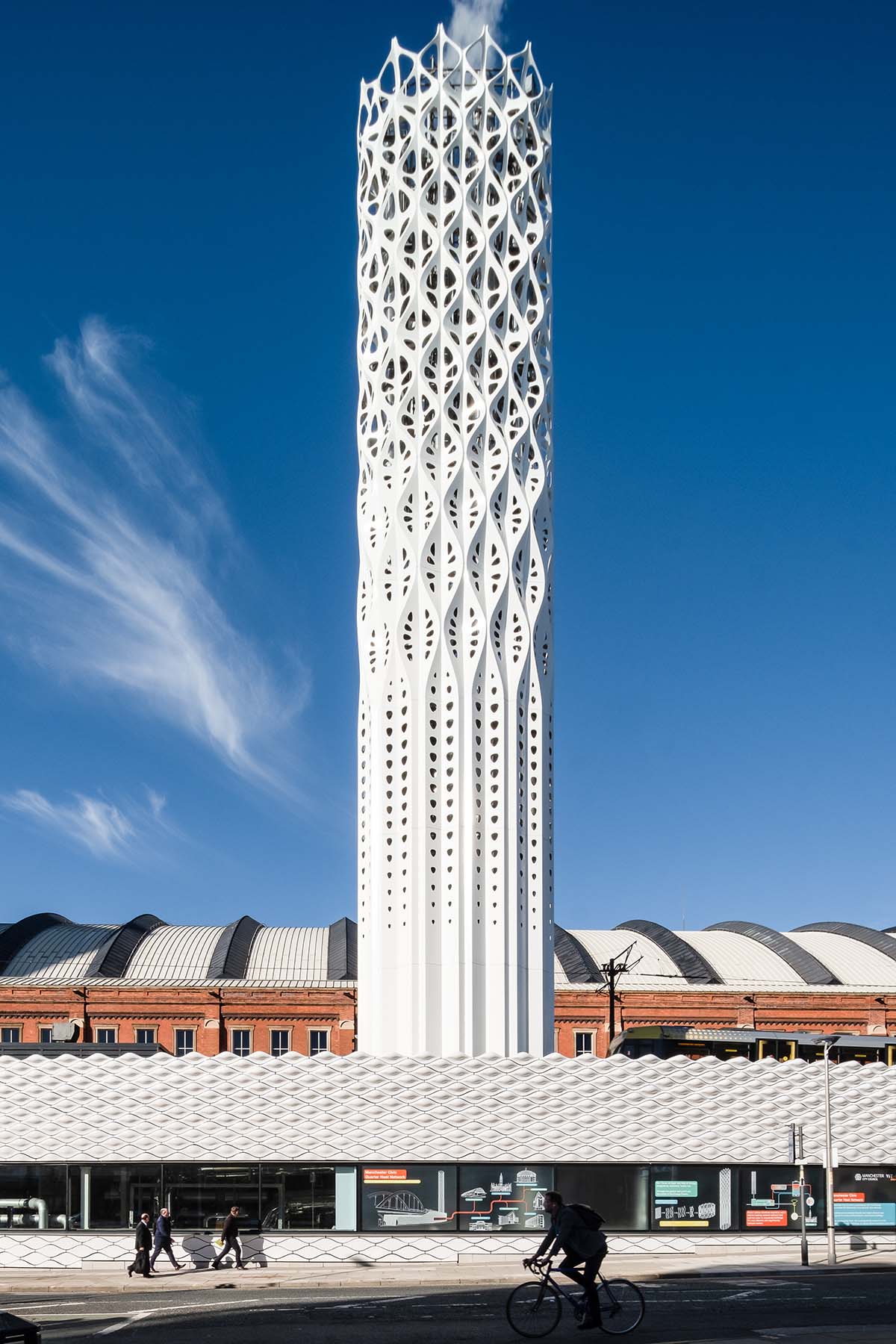 The tower uses minimum energy to light the Tower of Light. During the day, polished reflectors work inside the tower move in the wind, to reflect sunlight into the tower’s chambers and fill the tower with moving light.

"During the night, LED lights directed at the reflectors create animated, programmed light sequences every quarter of an hour, marking the passage of time," added the studio. 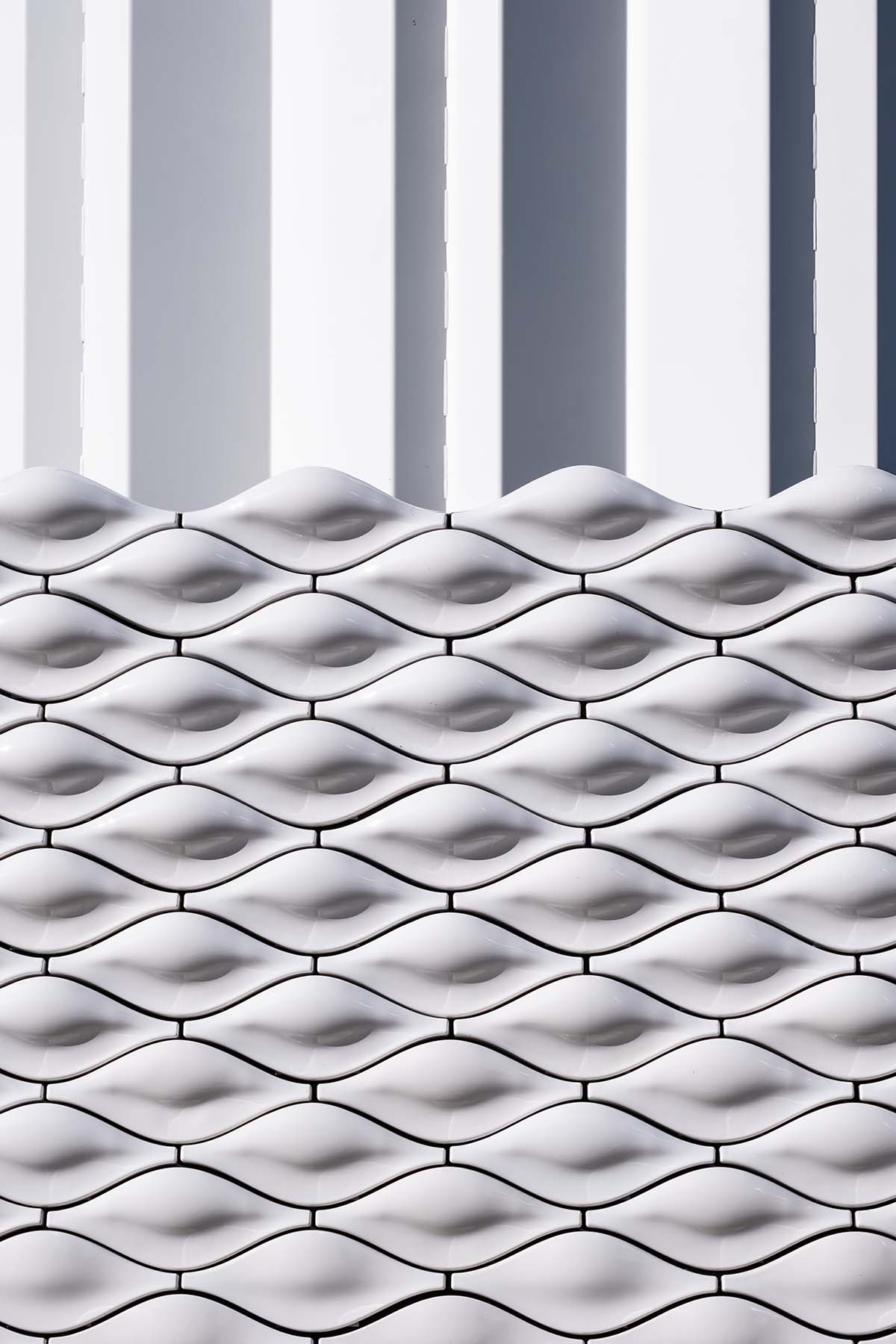 As the studio emphasized, "The Wall of Energy reflects the light of moving clouds and car headlights on the street, as well as being animated with integrated programmed light at night."

To mark cultural celebrations across the year, the Tower and Wall act as a landmark that is illuminated with colours to its surrounding. 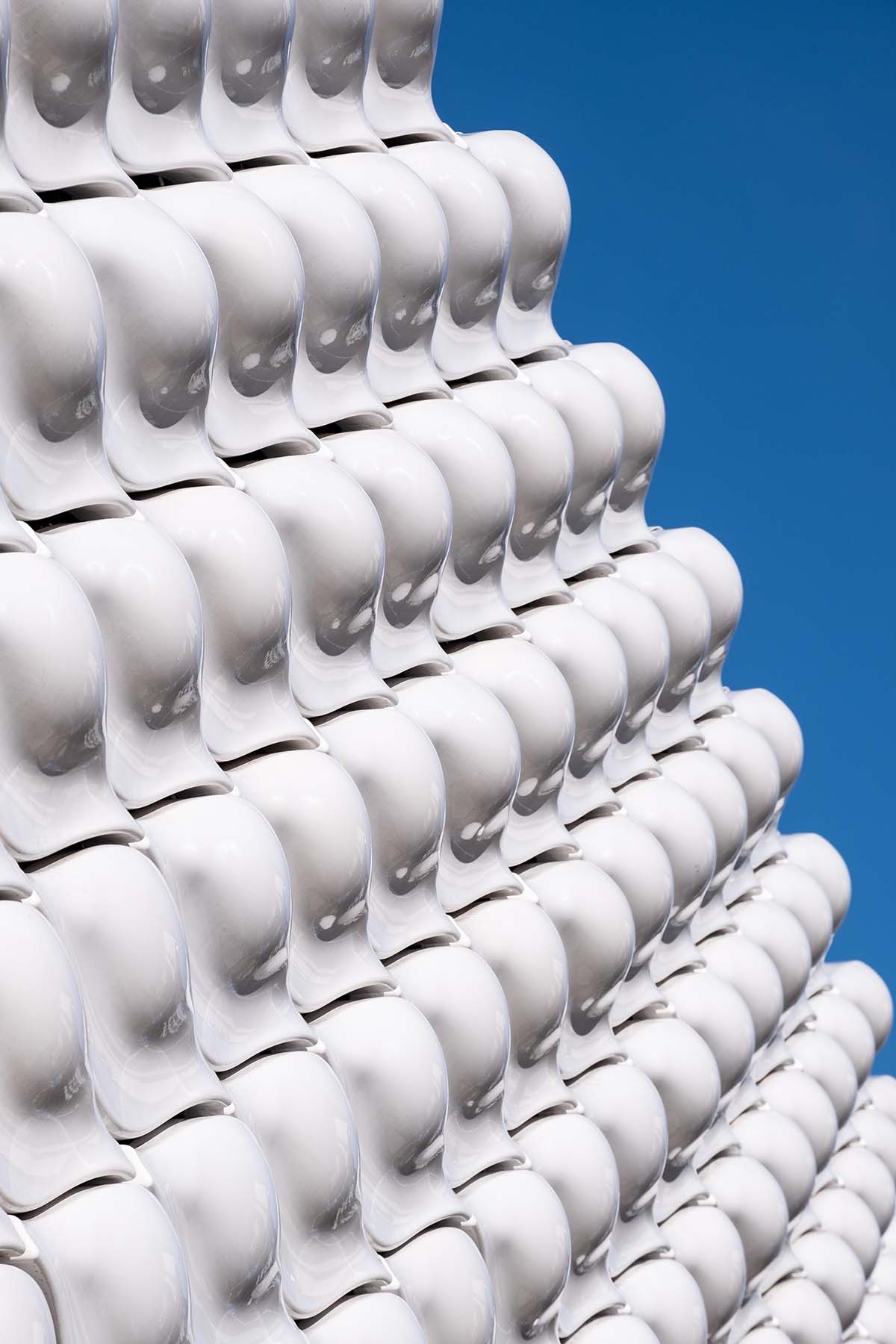 Tonkin Liu worked with locally based fabricators to deliver both the tower and the wall. The tower was fabricated by UK-based fabricators Shawton Engineering, where the final stitch-welding was reserved for the most experienced hands of two veteran welders.

The ceramic tiles were fabricated by Darwen Terracotta, one of the UK’s oldest and most respected terracotta companies. The studio added that "With the opening of the Civic Quarter Heat Network (CQHN) and Energy Centre, key civic buildings in the centre of Manchester are provided with low carbon energy through a 2 km network of buried, insulated pipes and power cables."

"The Energy Centre contains a highly-efficient 3.3MWe CHP engine with two back-up12MW gas boilers, The centre has the capability to incorporate future low/zero carbon energy technologies, including the use of Green Gas, Hydrogen Fuel, and Heat Pumps without disruption to the supply." 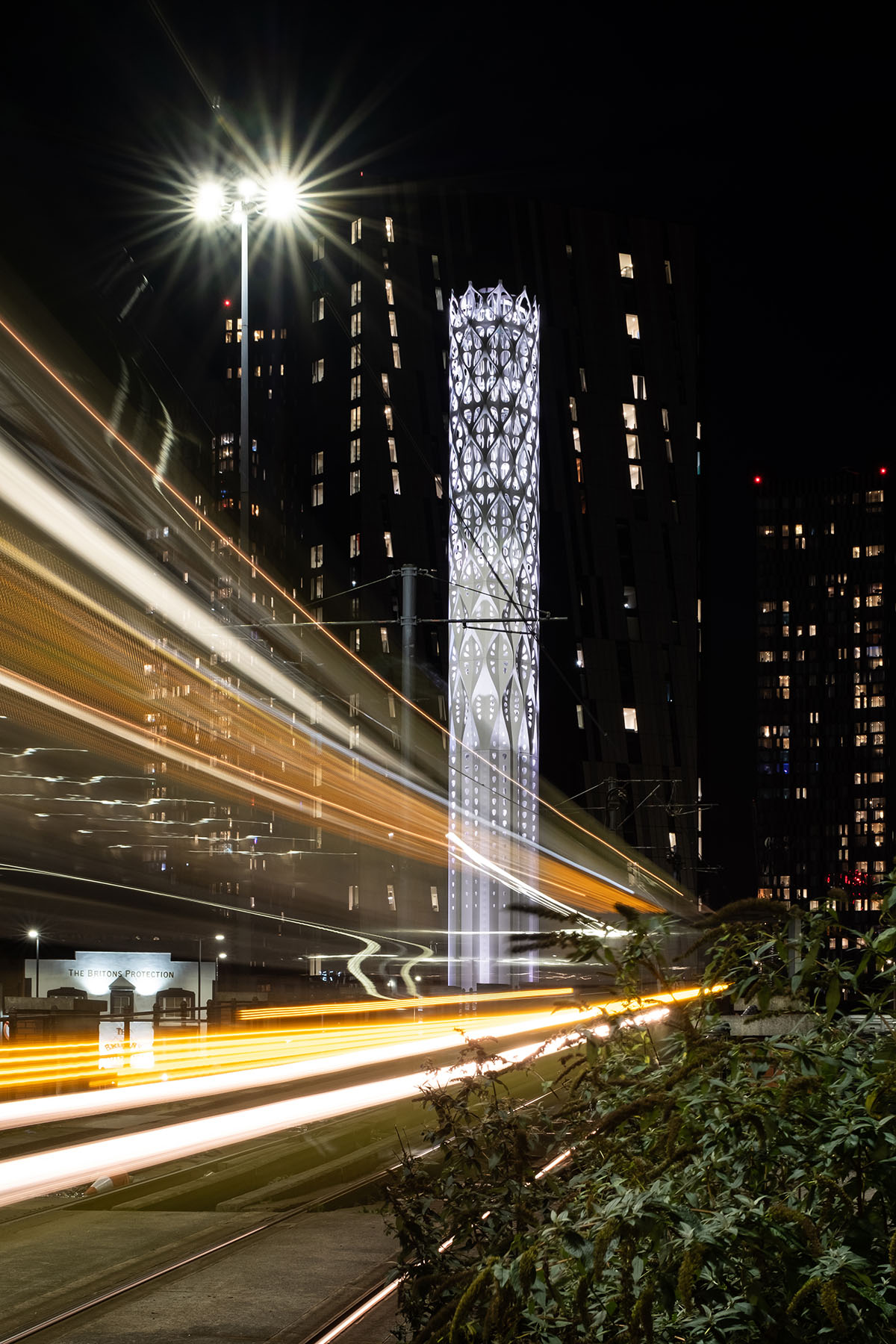 "Heat from the power-generating CHP engine is harnessed to create hot water, distributed through the insulated district pipework across the city. The technology improves energy, contributing towards the city's goal of becoming zero carbon by 2038," the office continued.

The Tower of Light and Wall of Energy become a prominent new gateway into Manchester’s historic district with its distinguished skin. According to the architects, together they form a holistic energy landmark that engages communities with the innovative technologies at the heart of Manchester’s low-carbon ambition and Climate Change Action Plan. 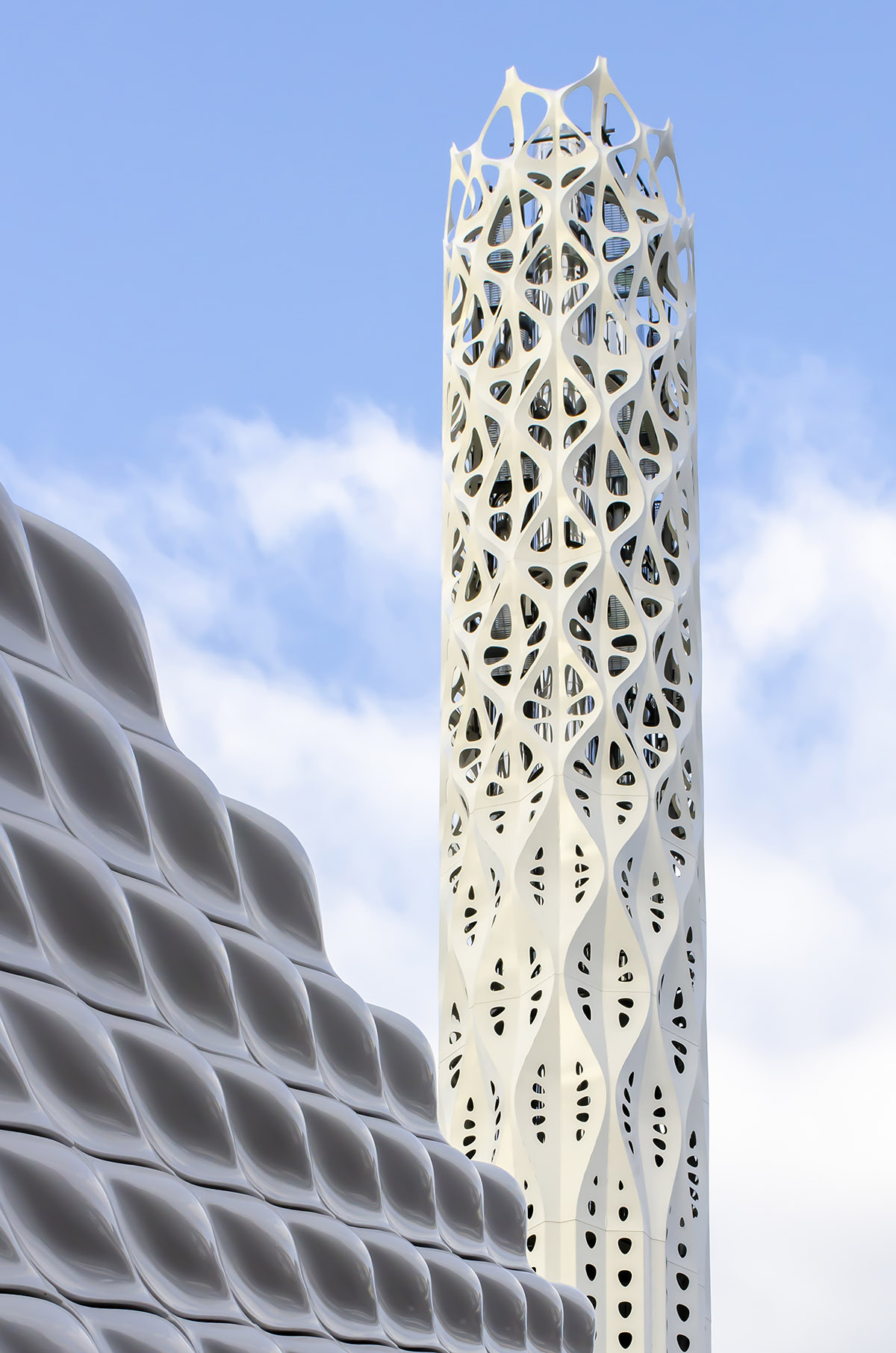 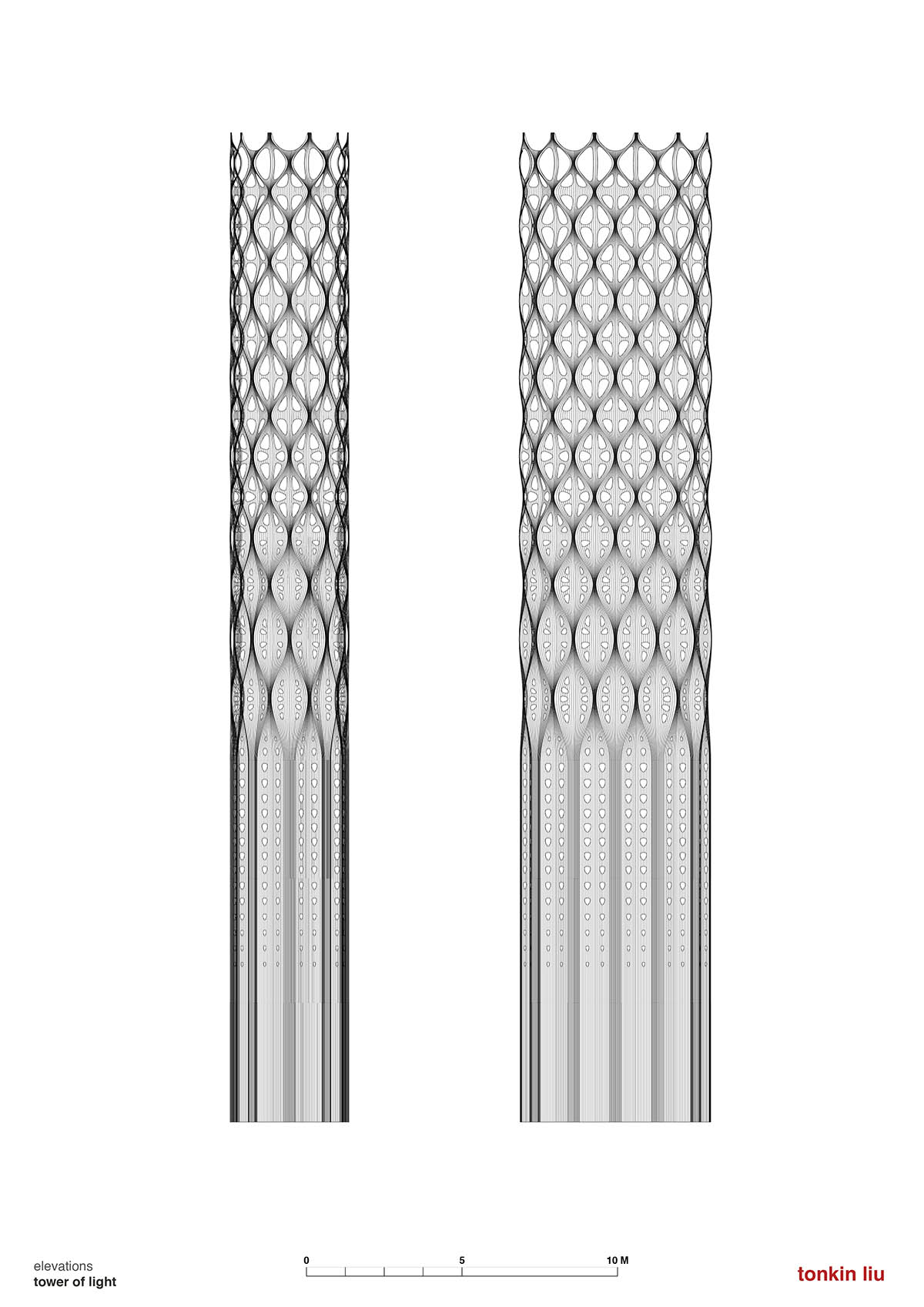 Tonkin Liu was founded by Anna Liu and Mike Tonkin in 2002. The office designs highly acclaimed buildings, landscapes, and sculptures.

Project name: Tower of Light and Wall of Energy