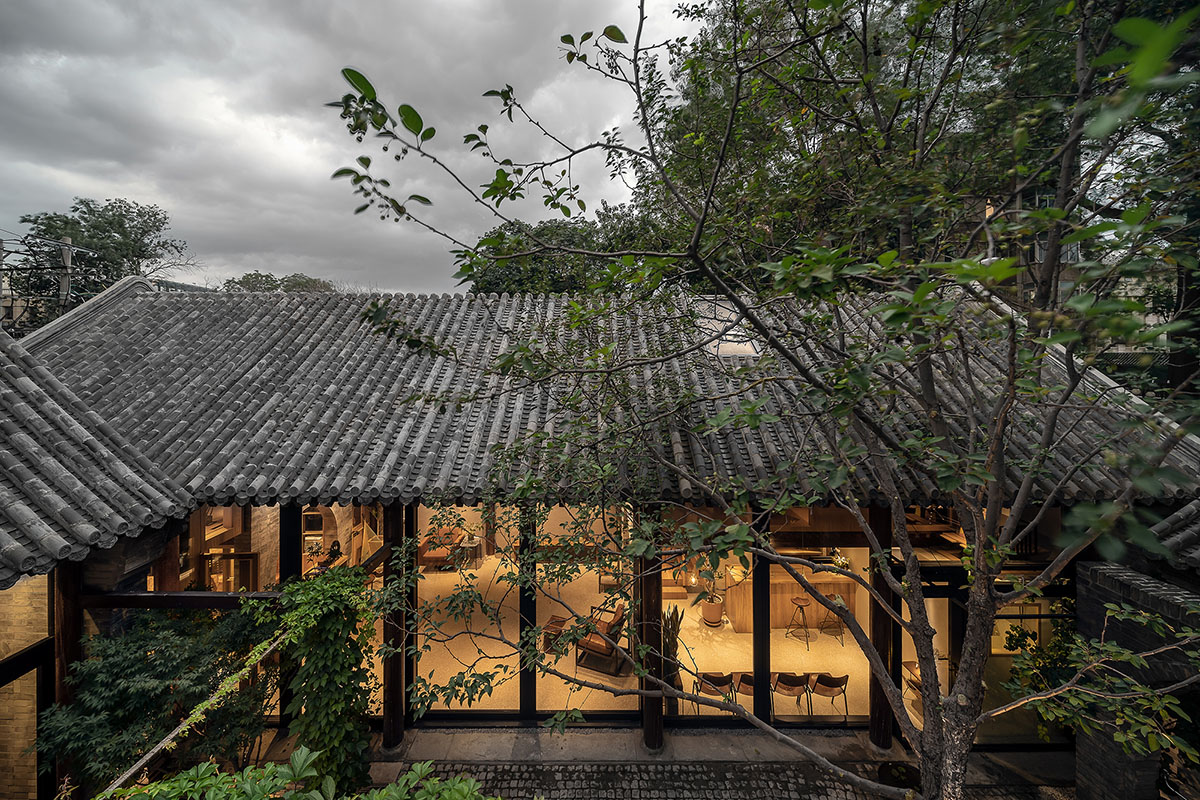 Days in YARD Studio, led by Haipeng Ren, has renovated one of Beijing's Hutong houses with a new courtyard arrangement.

Named Shiyuan, Days in YARD, the project has adopted the standards of low-energy use, that is, the passive house technology pioneered by the German Passive House Institute (PHI) — and the project met the PHI's certification process for design.

Besides, the designers have also taken into consideration the Active House standards (set by the Active House Alliance) (read below). In their active design, the design team made it more versatile in the various use of space in this small yard to vitalize and extend its lifespan. 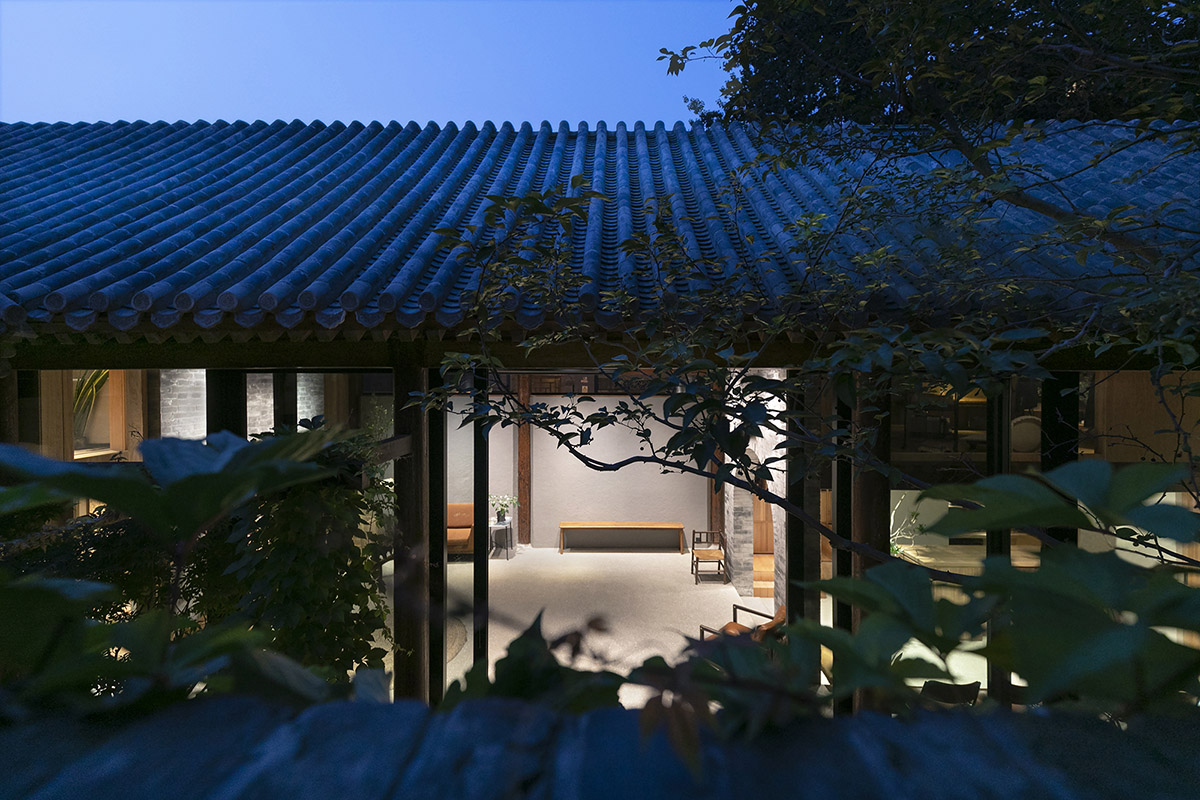 You can read the narrative of the project below by the architects.

Architectural components in the original construction were seriously damaged; the existing structure violated the code of the post and lintel construction system in north China. Both columns for the north and west walls were physically missing, leaving the space basically unlivable. To the south, a neighbor has four windows directly opening into our interior yard, yet it would be quite a wasteful use of space to block those windows, as with an iron plate, for privacy or partition, which could undermine the creation of a peaceful and inclusive neighborhood.

This courtyard is located at the corner of Shatan Beijie (Shatan North Street) and Dong Gaofang (East Gaofang Alley). Facing the street on the north side, it's manageable to implement daylighting, yet being watchful for "landmines" or architectural taboos in planning and designing, such as "tearing open a wall" or "punching a hole". To the east and west, there are two residential high-rises, which means we need to consider its impact on daylighting in the yard as well as the potential blocking of views. Our yard in itself was L-shaped, which demanded intelligent design, based on the limited layout of the north and west rooms, to make everything come together as a coherent and cohesive whole: fully utilizing space, analyzing site resources, to create and shape a humane and spirited new place. 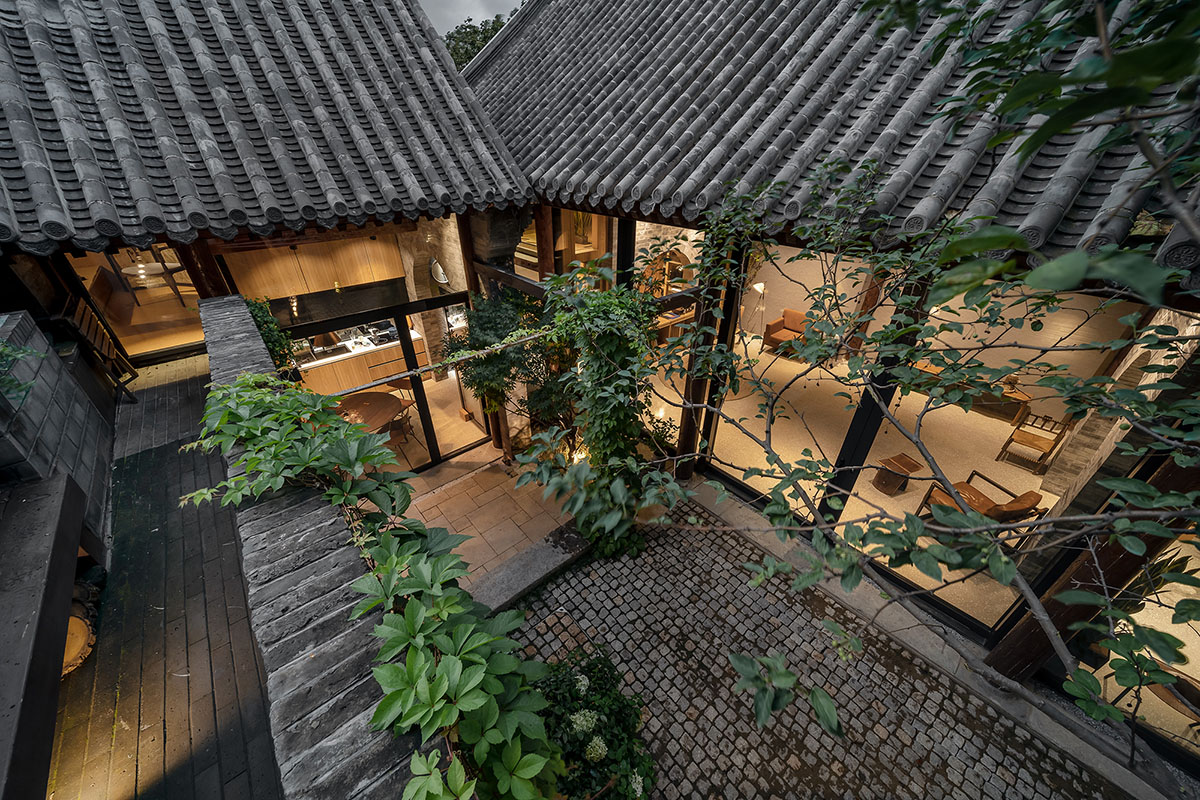 Co-Existence Between the Traditional Chinese Construction and Modern Technology

When I took over the remodeling of this courtyard, we did have quite a few available precedents to follow regarding ancient building construction. For instance, we have observed more than a few cases and relevant examples in garden designs, contemporary space design approaches, fresh use of materials, etc. The questions we have raised here are: How to make a return to courtyard lifestyle more livable? What technical standards could be used for reference? This ranges from room temperature, humidity, to density in carbon dioxide, how to maintain fresh air, the sources of water, electrical circuits and the Internet, household water and sewage drainage, and noise control ... Because of all these serial parameters for control, we must turn our rooms into a "machine", so to speak, fitted for living, as it is no longer a shell of an ancient building, or a set of technical tricks performed with contemporary architectural "implants". 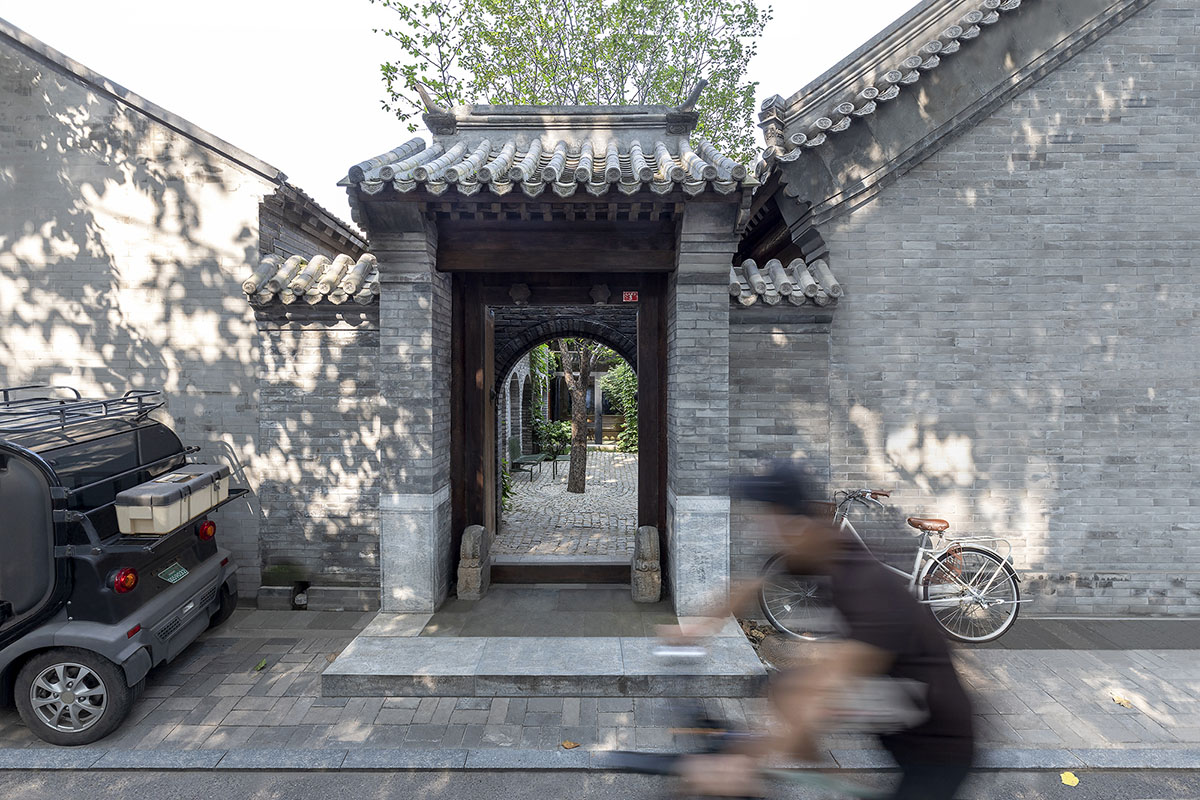 How then to maintain co-existence between the traditional building elements and modern architectural aesthetics? For this remodel project by Shiyuan, the architect did give more thought to problem solving, from macro concepts down to micro details to harmonize the ancient Chinese construction with (Western) modern building. Here we have adopted the building standard on low-energy use, that is, the passive house technology pioneered by the German Passive House Institute (PHI) — and the project met the PHI's certification process for design. Simultaneously, we have also taken into consideration the Active House standards (set by the Active House Alliance) (see below). In our active design, we made it more versatile in the various use of space in this small yard to vitalize and extend its lifespan. 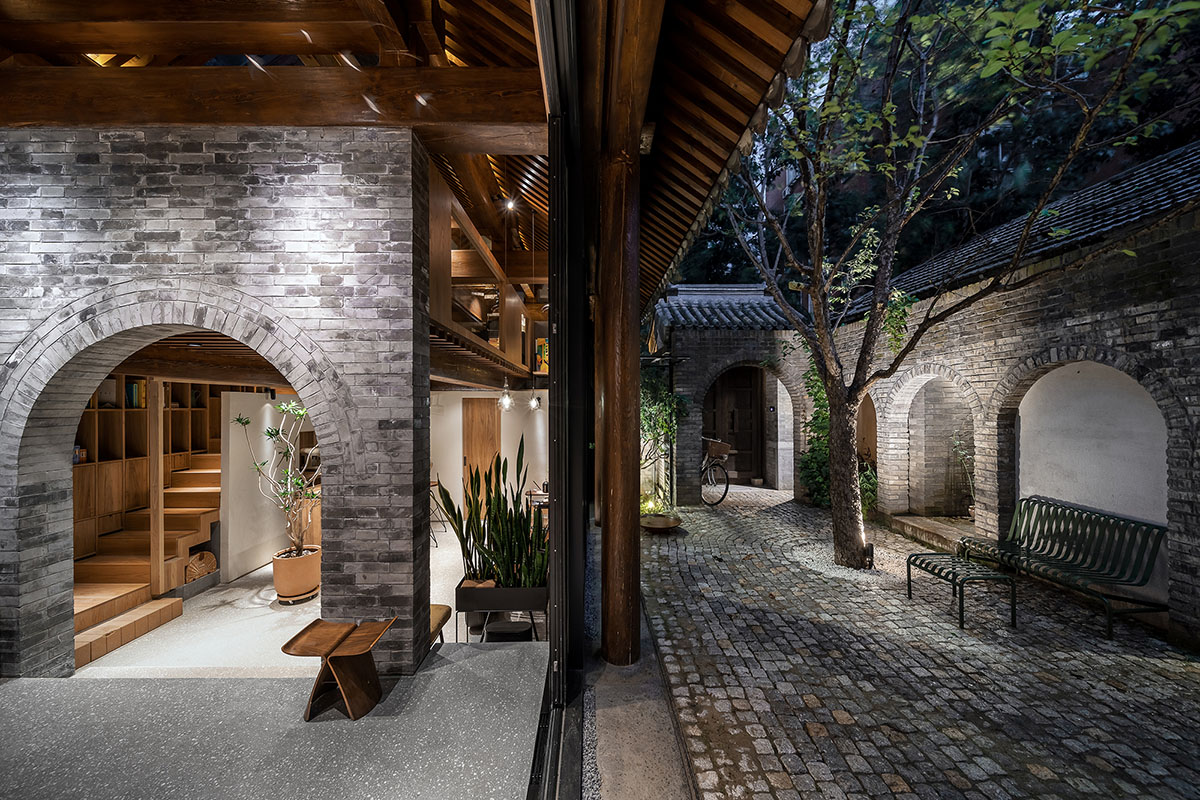 Flexibility in Space Use, Changeability in and Speculation on Fixed Function-Driven Design

What was peculiar about this yard was that its owners did not specify or clarify the scope and purpose of the design project. To a certain extent, it was up to the architect to come up with his own value propositions for remodeling. Generally, a house is used for living, and better yet, for long-term occupation. The owners did express their wishes for holding various activities, and by acquiescence, they endorsed such a preset vision: a fuller use of "a yard as a meeting place". The initial plan was to open the space at the lower level to merge it with the yard as a whole and to transform it into an interface where the inside and outside could interpenetrate and be interconnected. The upper areas located in the interlayer (mezzanines) were designed as a half-private space with a multi-purpose design approach. 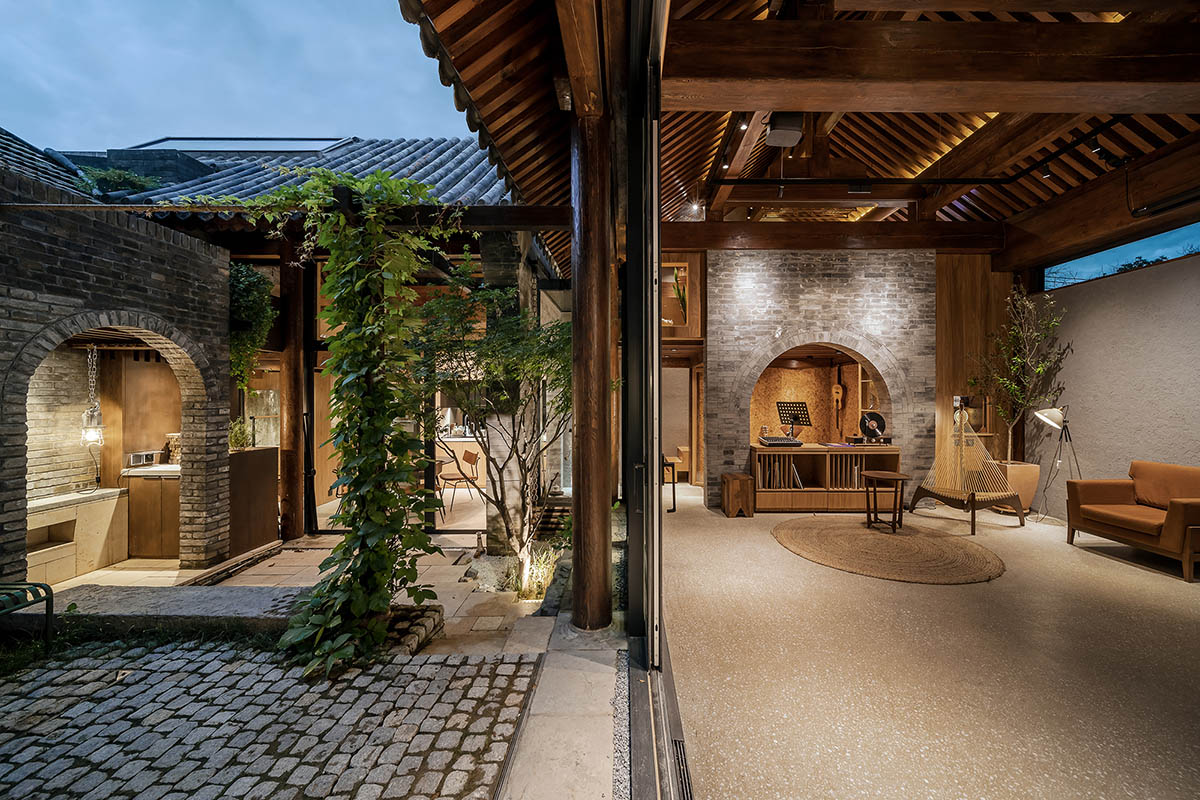 How to Transform a Narrow and Limited Space into Something Visually Spacious, Rich, and Versatile

The plot area of this courtyard is 168 square meters, and 110 square meters for the interior. Based on this condition, the design approach was "First Expand-Then Contract" — that is, the first step was to make the space as open (transparent) and comfortable as possible to enhance people's feeling of spaciousness, by avoiding its environmentally negative elements while maximizing its environmentally positive factors. The preset on natural flow endowed the space with the maximum experiential feel. Indoors, except for the bathrooms, no doors were installed; then, according to the specific spatial constraints, we performed structural deconstruction to create a nuanced yet smooth spatial experience by alternating patterns and links at structural joints. Moreover, in small spaces, people's lifestyle and living conditions are subtly suggested to enable more spatial functions and purposes. 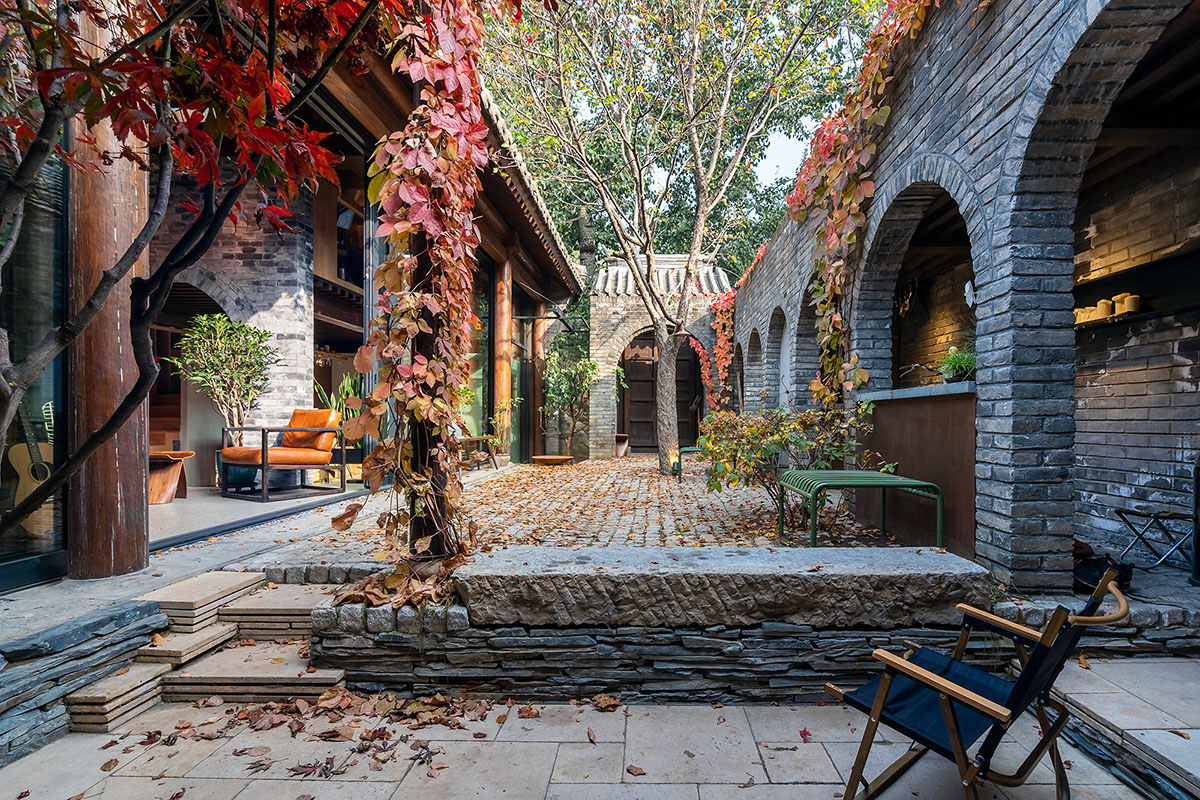 This remodel project by Shiyuan (Days in YARD) is a meaningful experiment in many ways, but there is no way to cover all the details in just several paragraphs, even though it is worth documenting many things in the process of construction. Some attempts at innovative material use are rather intriguing, which could be more broadly appealing, because such experiments can be applicable or transferable to structural links in other projects for remodeling ancient buildings to enhance heat preservation, airtightness, energy saving, and environmental protection, all basic concerns;yet some methods or approaches are more effective only for Shiyuan's own construction sites and circumstances. With changed sites, and different targeted users, the terms and language of the design must respect a project's own context. That said, what is briefly described here could perhaps be valuable for reference on passive energy conservation, active site construction, moving from abstract concepts to actual comprehension, analysis, and implementation. It is like "tossing out a brick to attract jade gems from others", that is, to invite more in-depth discussions, as the saying goes, since currently, there are many remodel projects in China that will call for integration of the new with the old. 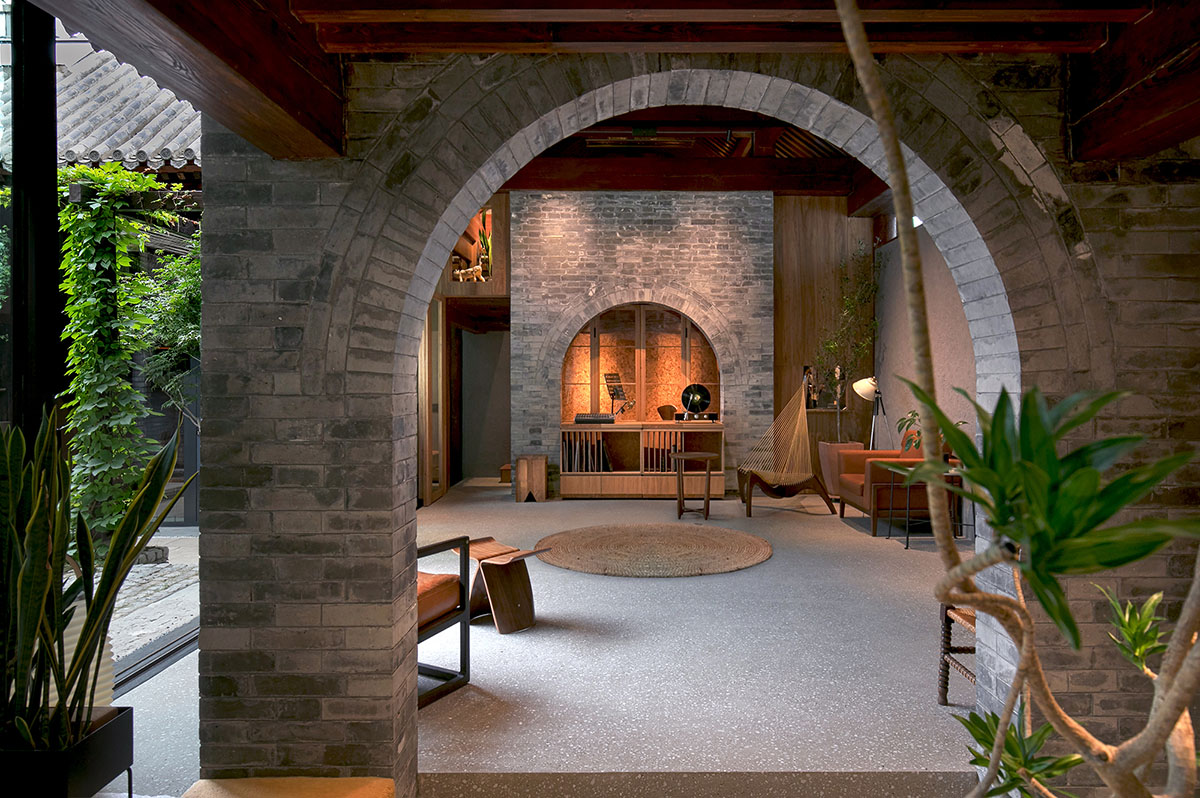 Originated in Germany at the end of 80s of the last century, the concept of Passive House (Technology), based on low energy consumption in construction and building performance, started to develop and gain momentum. Along with popularization of computer use, scientific analysis and simulation have been conducted on the physical construction and performance of buildings. Its purpose is to strictly control a building's heat preservation and airtightness to lower energy consumption. According to PHI official data in 2017, there are about 5000 projects certified by the Passive House Institute (PHI), mostly in Europe.

Shiyuan broke ground on its project in 2019. In 2021, after the remodel, Shiyuanwas granted the German PHI (the Passive House Institute) Design Certificate, and meanwhile, was the first experimental case in Northern China to have integrated the ancient post and lintel style with (Western) passive house energy-saving technology. Its significance lies in that by using a traditional 5-structural bay for reference (with the master bedroom and living room located in the north receiving daylight), this project set up parameters for other projects in general, by adopting the (Western) principle of passive sunroom with low energy consumption to achieve the "warm-in-winter & cool-in-summer" effect on constant temperature and constant humidity. 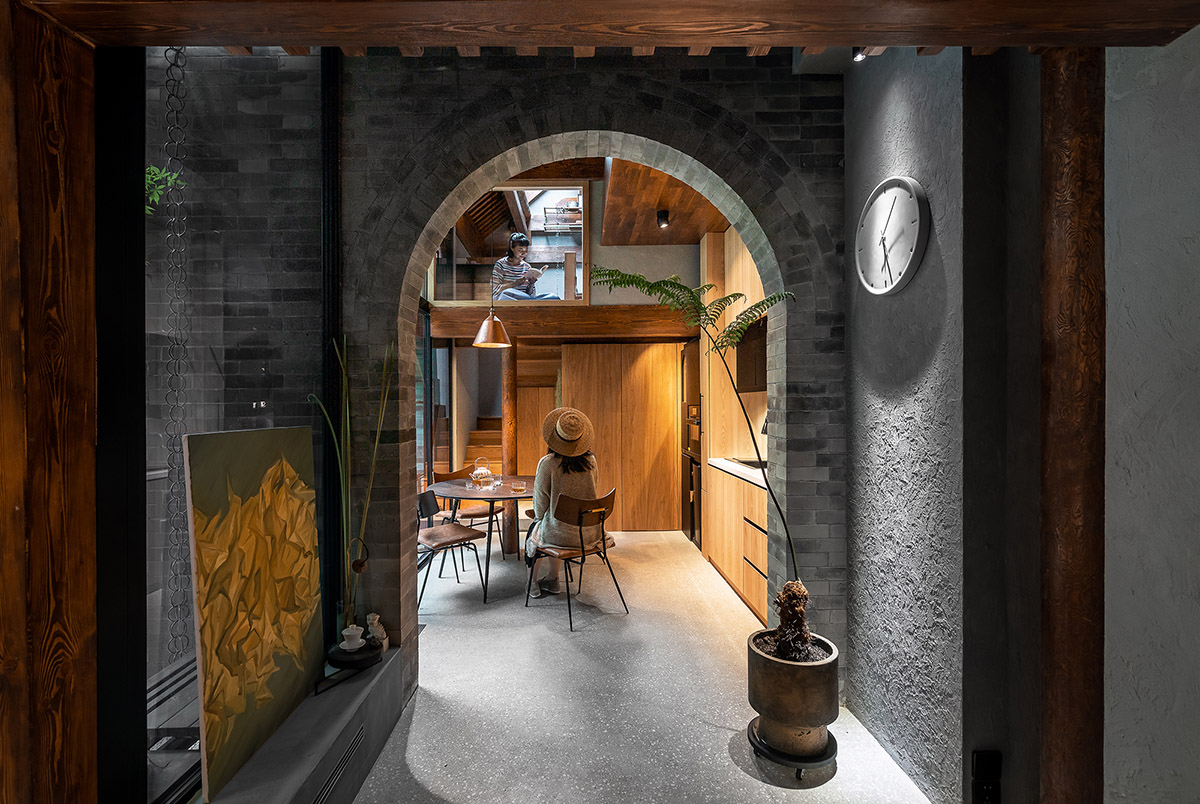 Shiyuan set its parameters to a standard on energy use at 120KWH (Kilowatt Hour)/per year per square meter, including hot water supply (employing the German standard for its design). Currently, from May to November, based on our real-time records month by month, half-year energy consumption being 3000KWH, on average, approximately 500KWH per month. It is estimated, based on the data collected, about 40KWH/per year per square meter, in line with the preset parameters in terms of passive house low energy consumption, (the national standard being 60KWH/per year per square meter). Overall energy use includes temperature control and humidity control, energy use from a new draught air purifier (Aernova, for Passive House Ventilation). At present, the constant room temperature is floating between 21-23 degrees centigrade; and the constant room humidity is fluctuating between 40% and 60%. Though the north room has an additional under-floor heating system installed, as an active style adjuster, in winter, it is not necessary to turn it on.

The core rationale for energy saving is to recycle heat (with a recycle rate greater than 75%) based on moisture preservation and airtightness, yielding energy use that is comparable to one fifth to one seventh (1/5 to 1/7) of common AC (Air Conditioning) use. As the first case of experimentation on the integration of the (Chinese) ancient architecture, data collection and analysis are still on-going. Heartfelt thanks go to our passive house technology consultants and each professional involved for their sustained support and contributions. 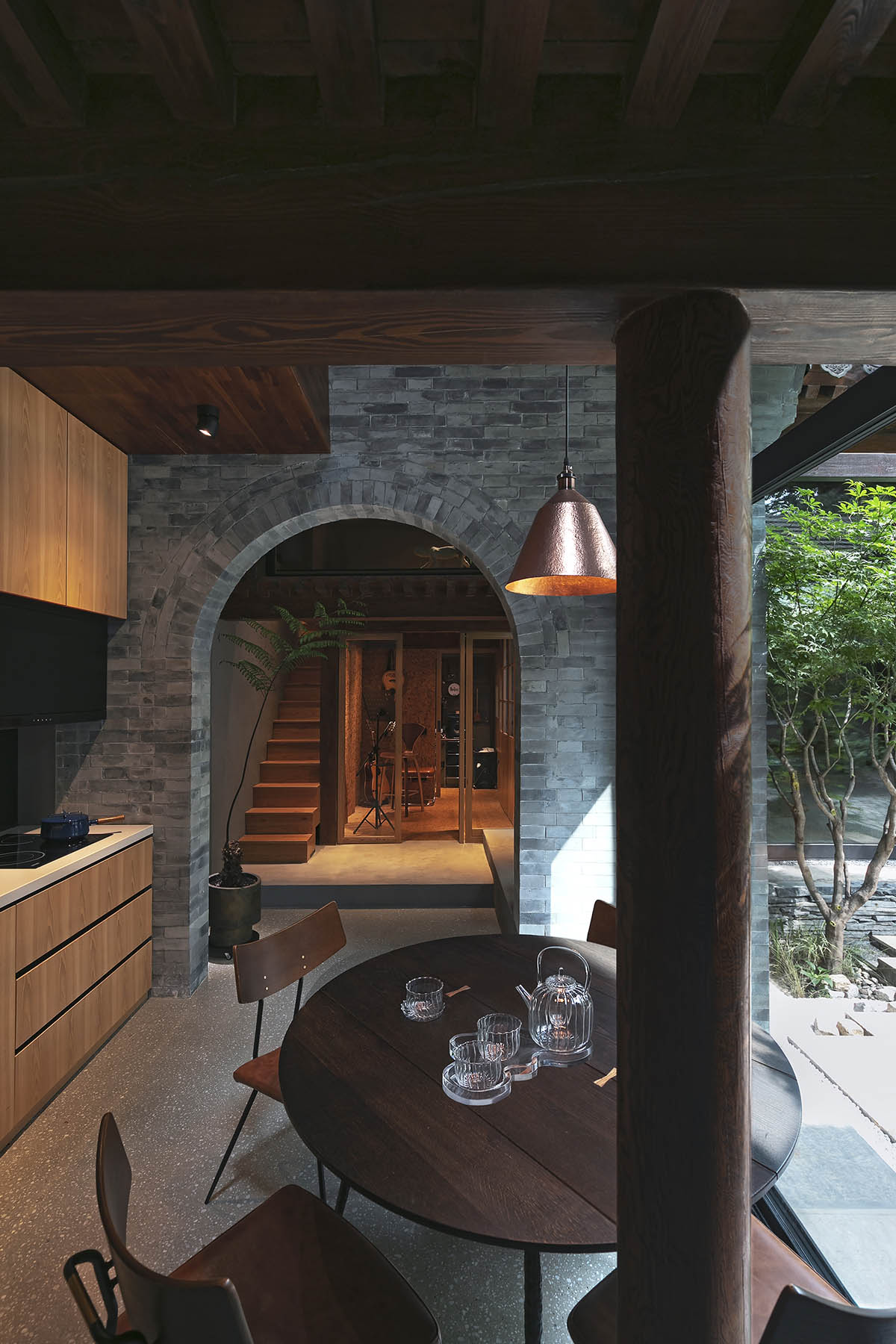 In 2002, originated in Denmark and other Northern European countries, the Active House Alliance was founded in Europe to enhance, by (intelligent) design, individual building performance and functionality, vitalize space use, and improve the sense of happiness and well-being. In December 2020, the Architectural Society of China issued the Active House Construction Specifications (T/ASC14-2020). Not only does the Active House Alliance pay close attention to energy conservation in construction, environmental protection, and the aspect of sustainability, but it also evaluates user health and lifestyle within buildings. Its focused areas and technical approaches differ somewhat: "passive prioritized while active optimized" (if not prioritized).

Its core appeal is to create a meaningful human living environment by comprehensive balance on site resources. Since its rationales and value codes herald a new era, the Active House Alliance conducts annual reviews for awards with specific guidelines. In 2021, Shiyuan won the top prize of the Active Excellent Award for design, the first contest in China sponsored by the Active House Alliance. 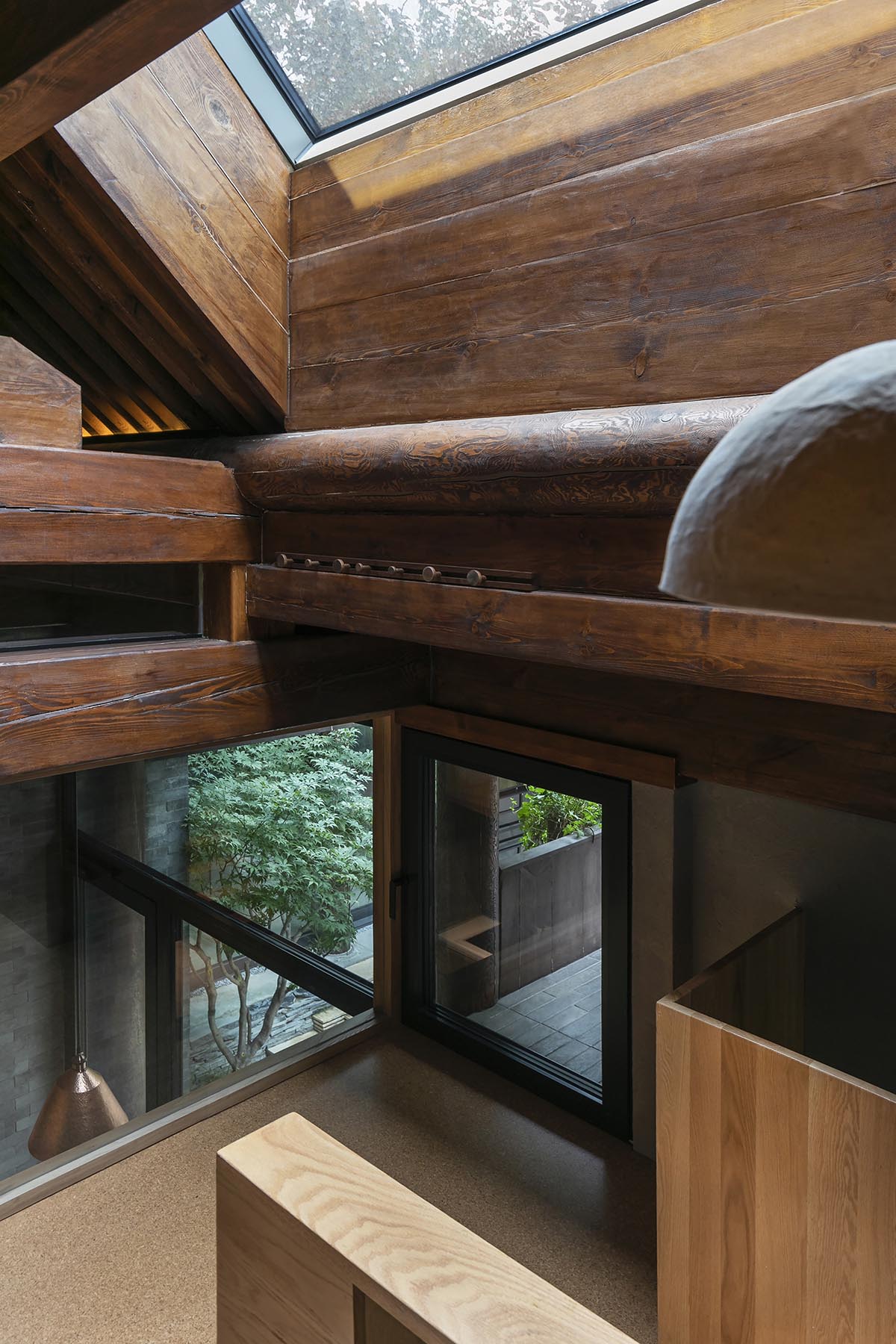 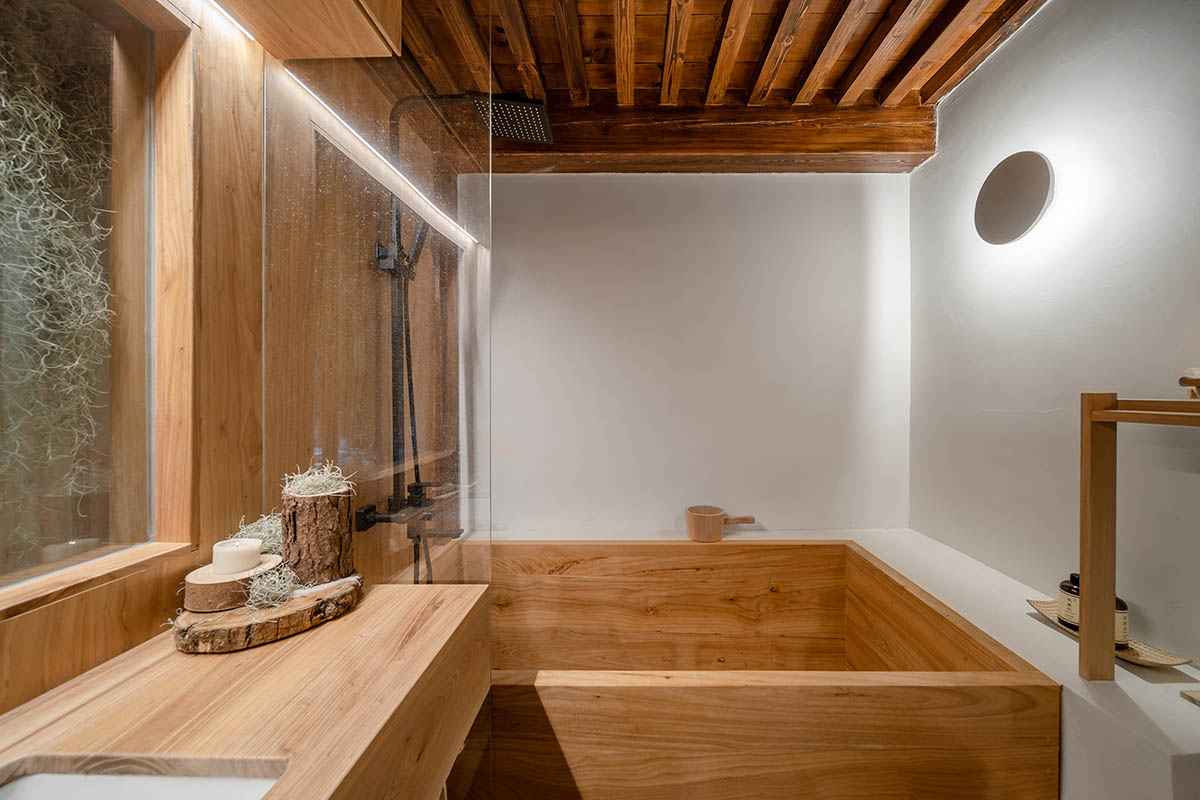 Also, as one of the sponsors, Shiyuan, along with some friends within cultural circles in Beijing, has hosted multiple chamber music performances. Because Beijing boasts numerous celebrated music institutions and organizations, at its core, the city culture is a music culture. The designer (architect) himself is also a musician. For this reason, when designing this courtyard, the architect was subconsciously and even pervasively attentive to matters of acoustics and audio-visual synesthetic effects. 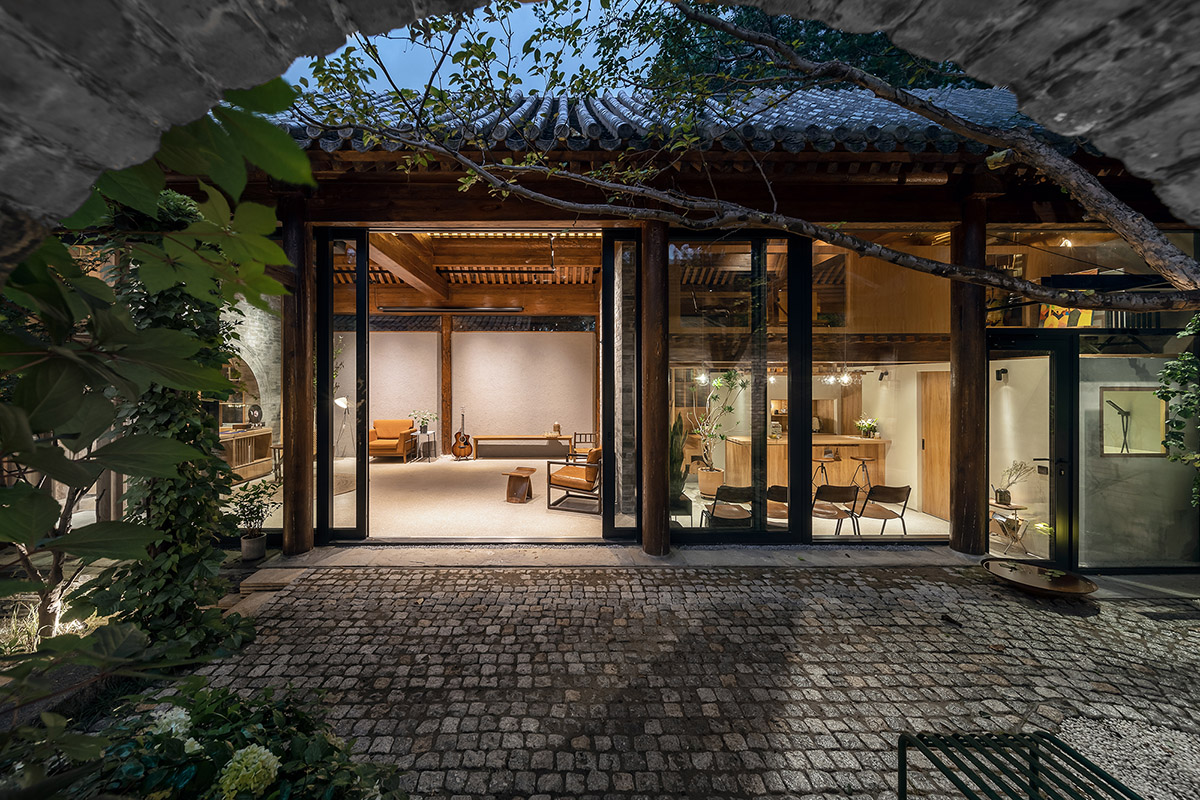 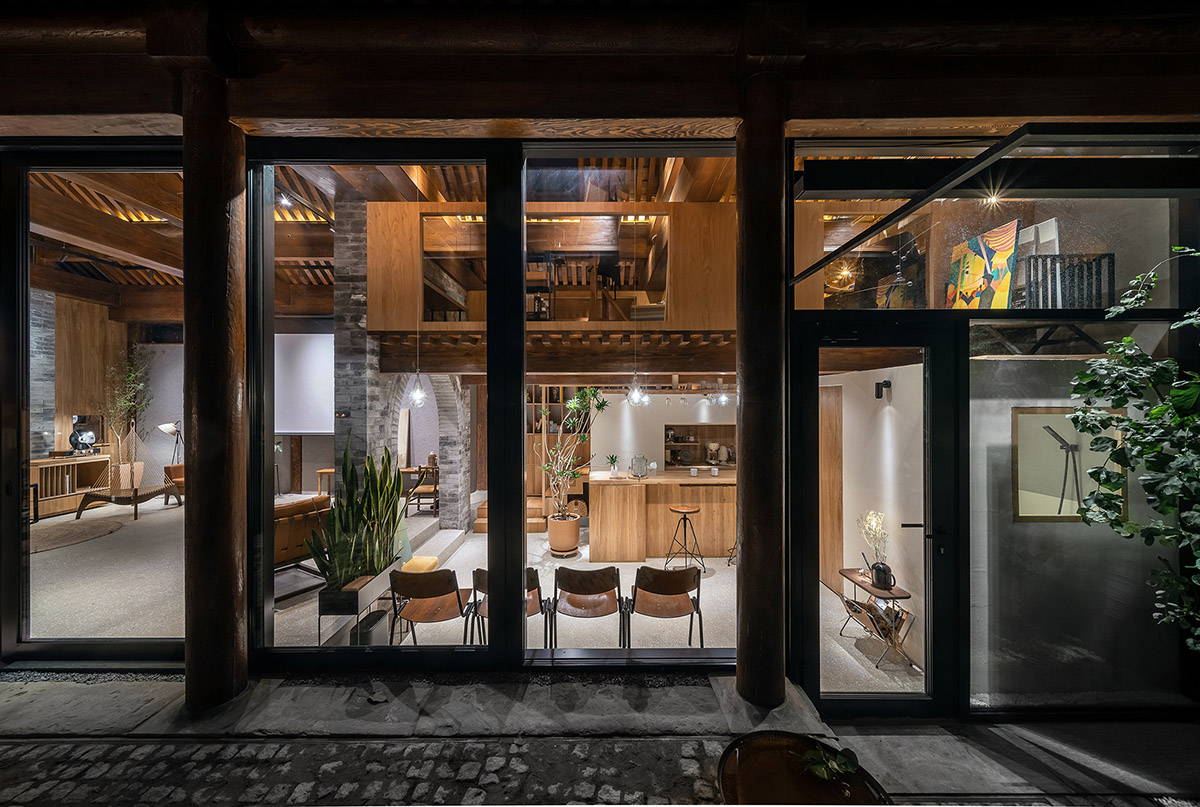 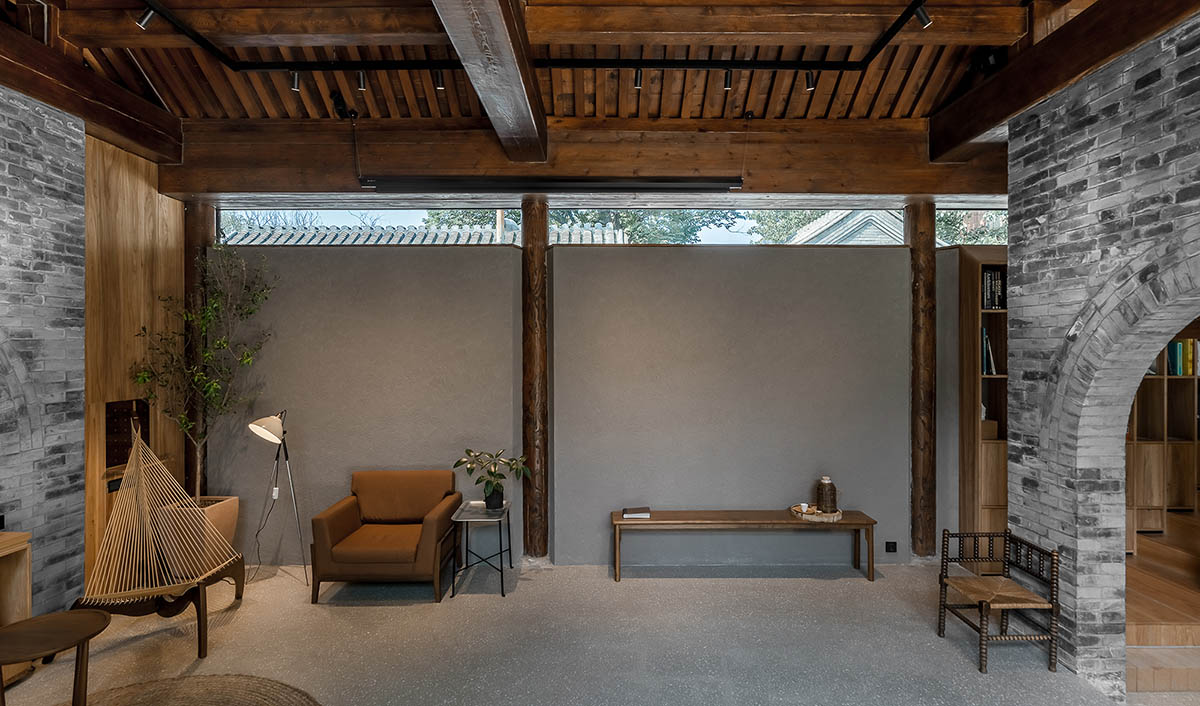 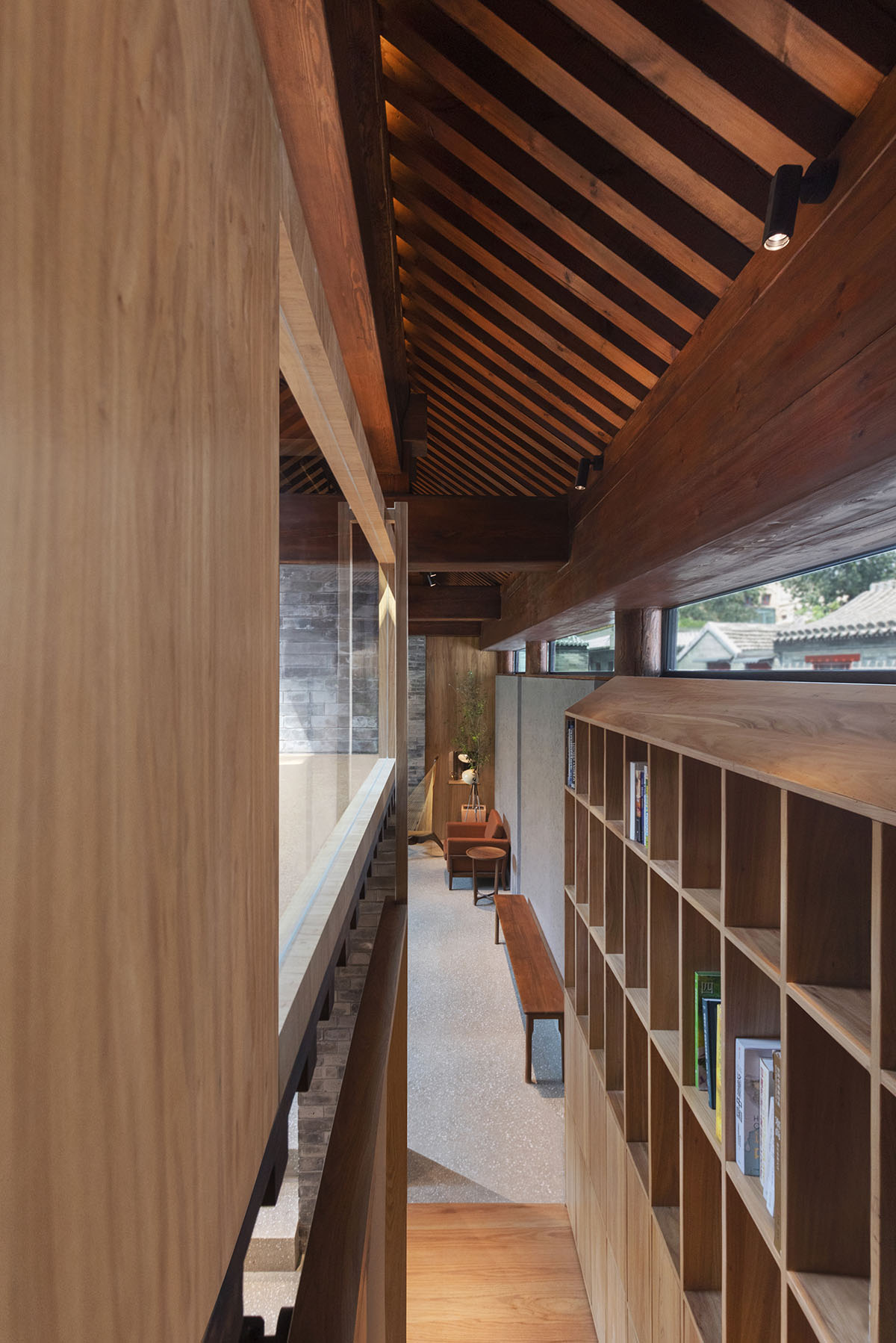 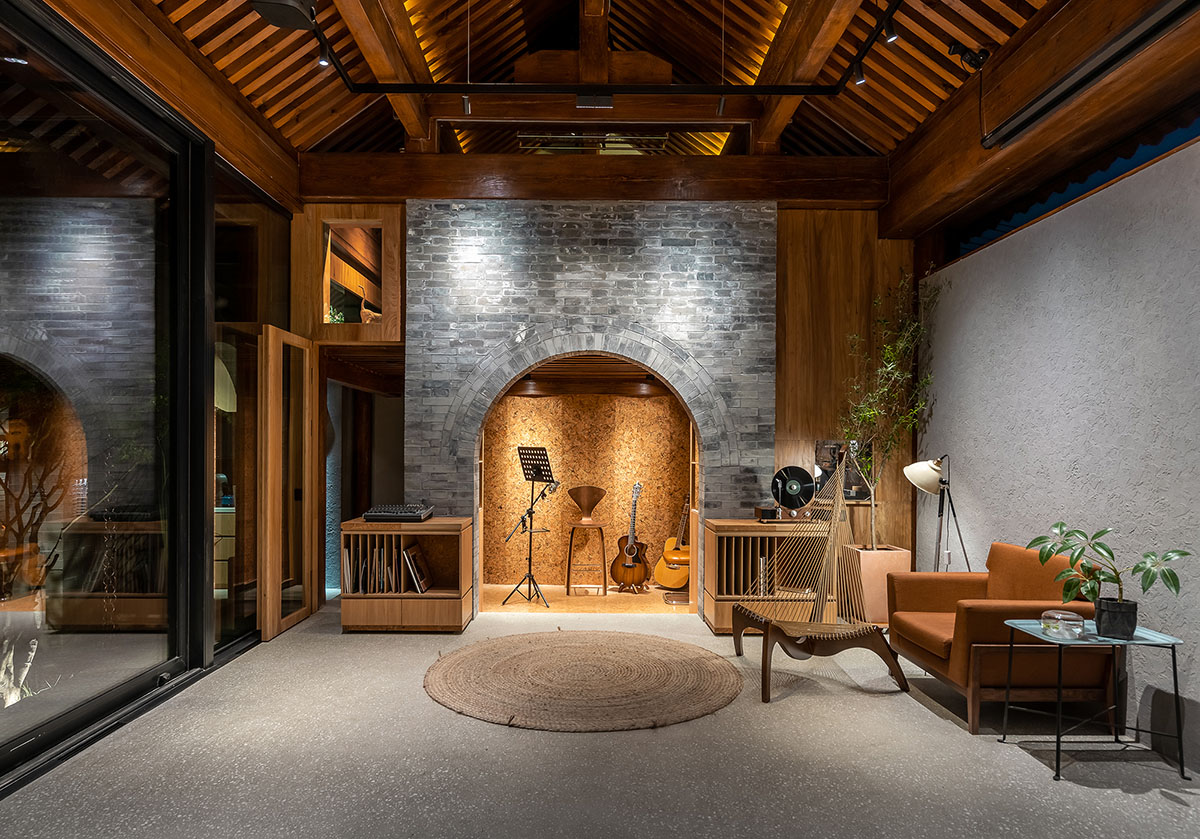 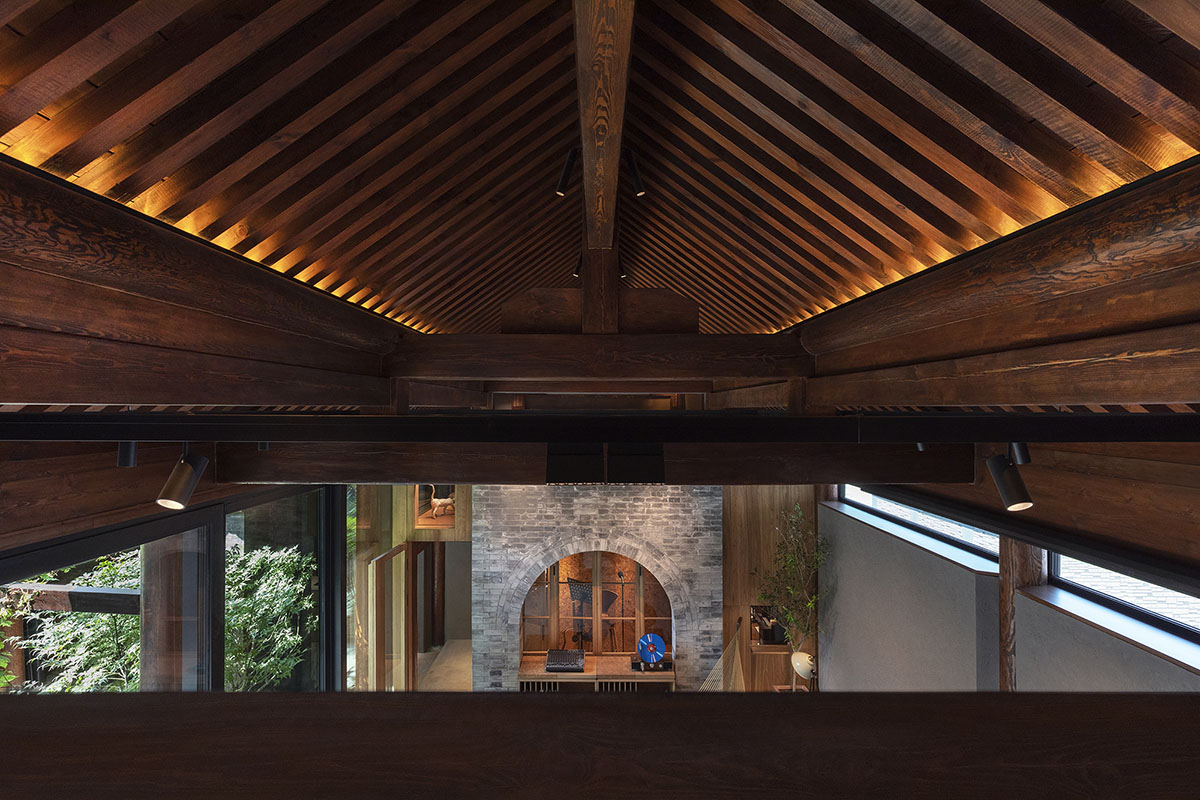 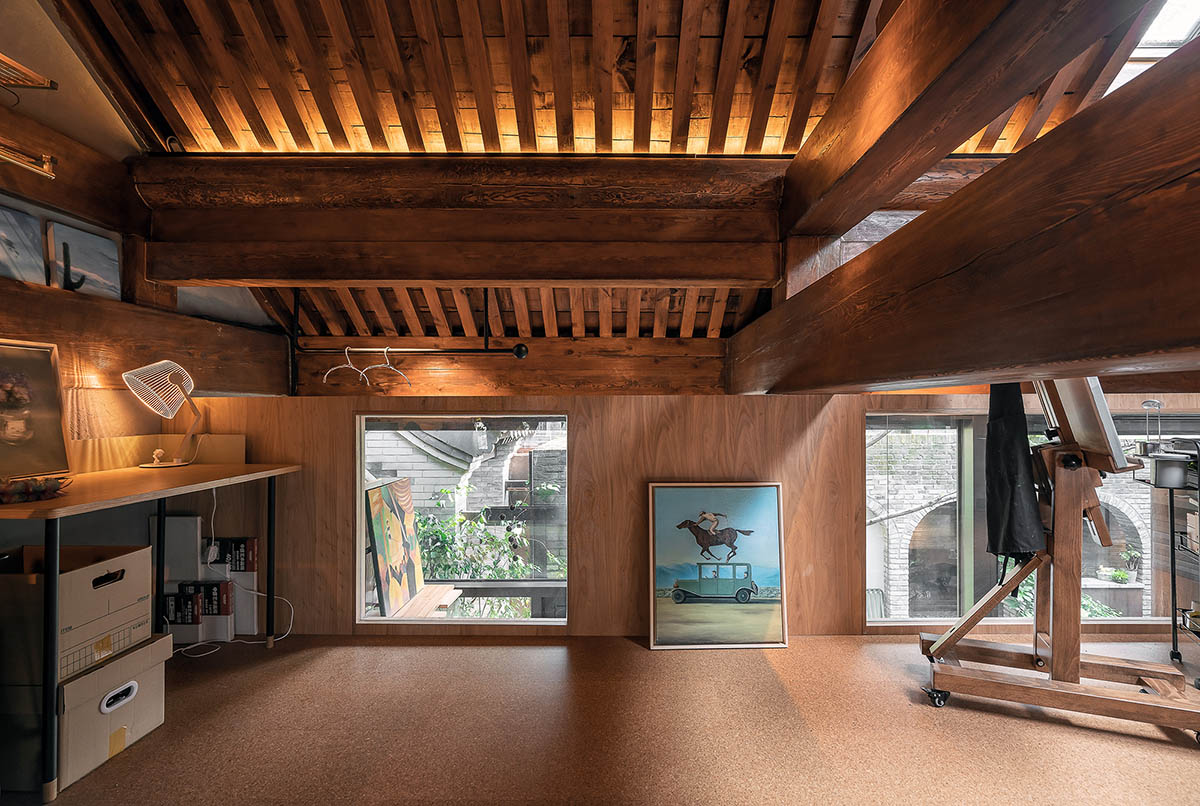 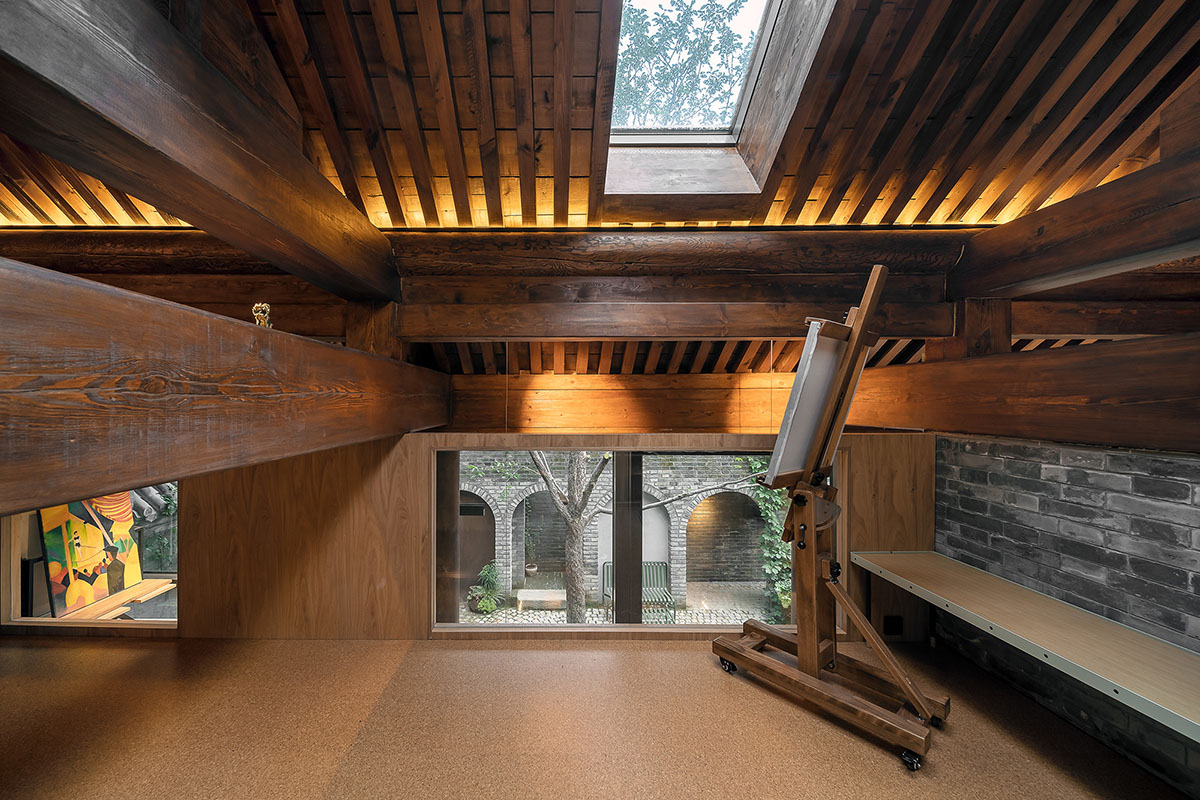 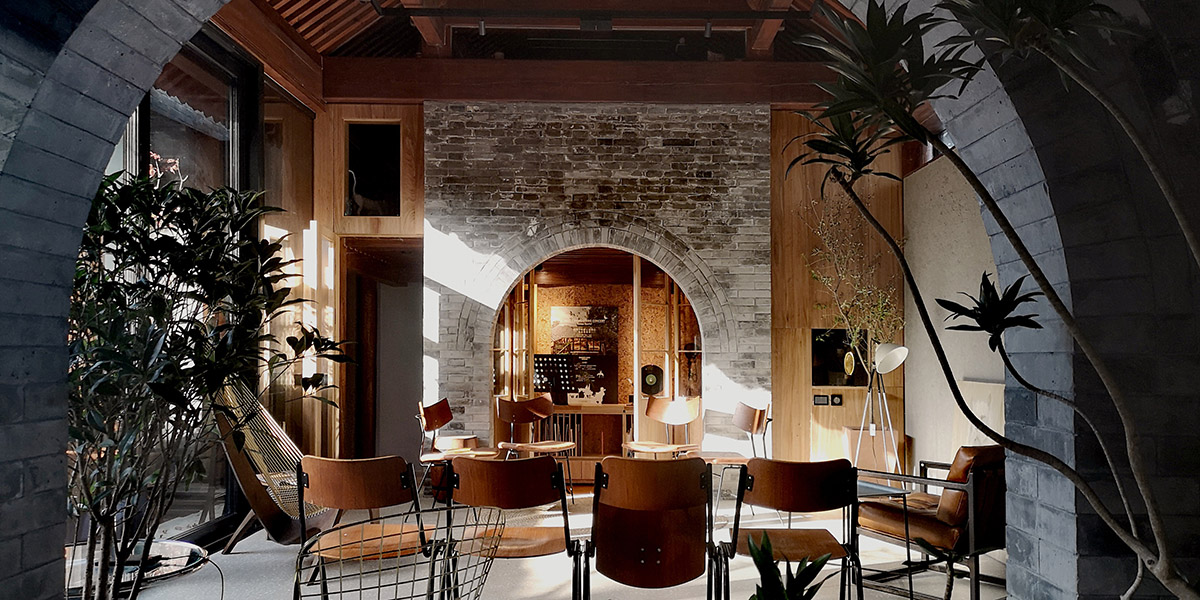 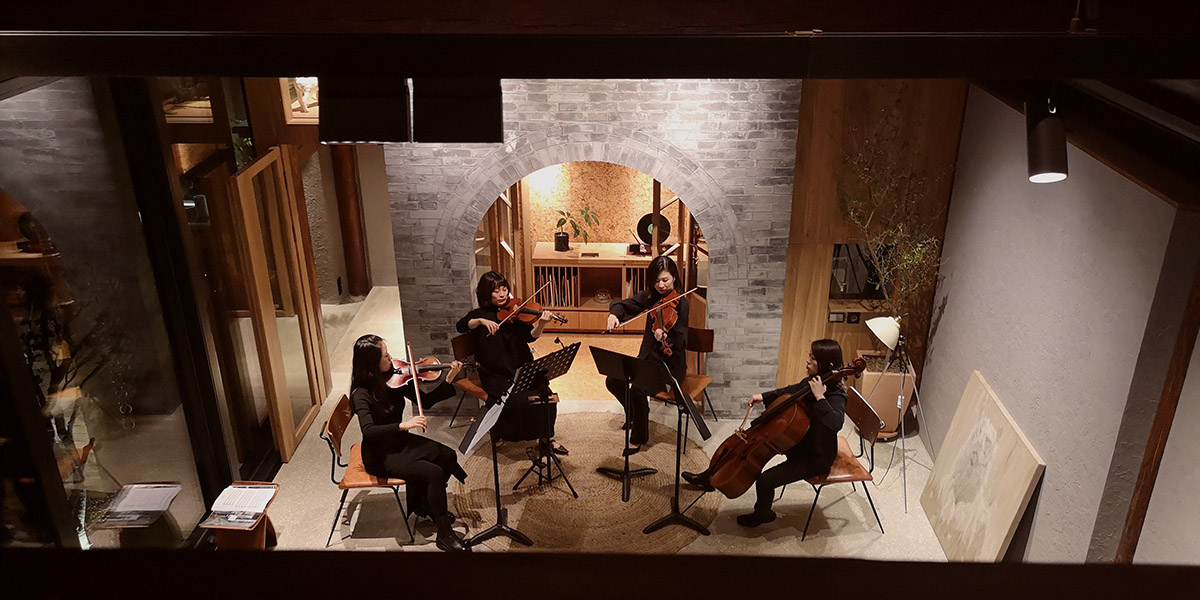 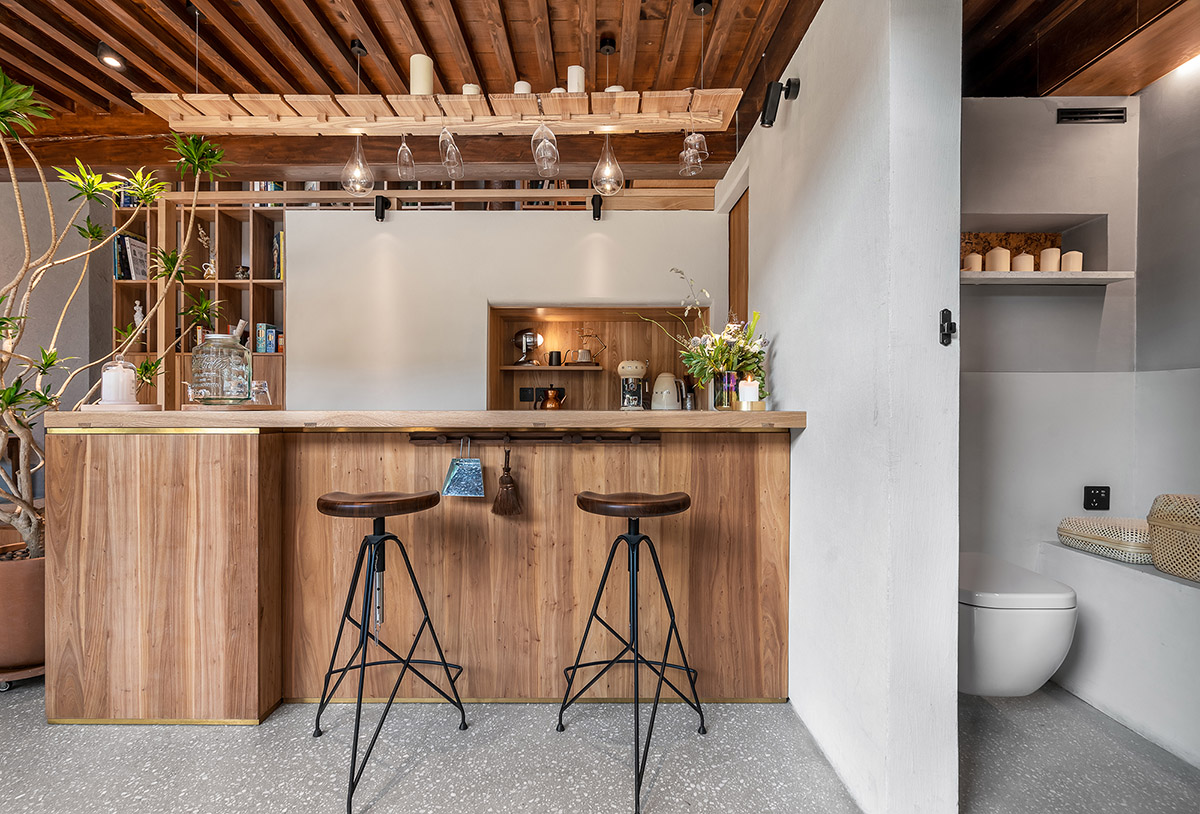 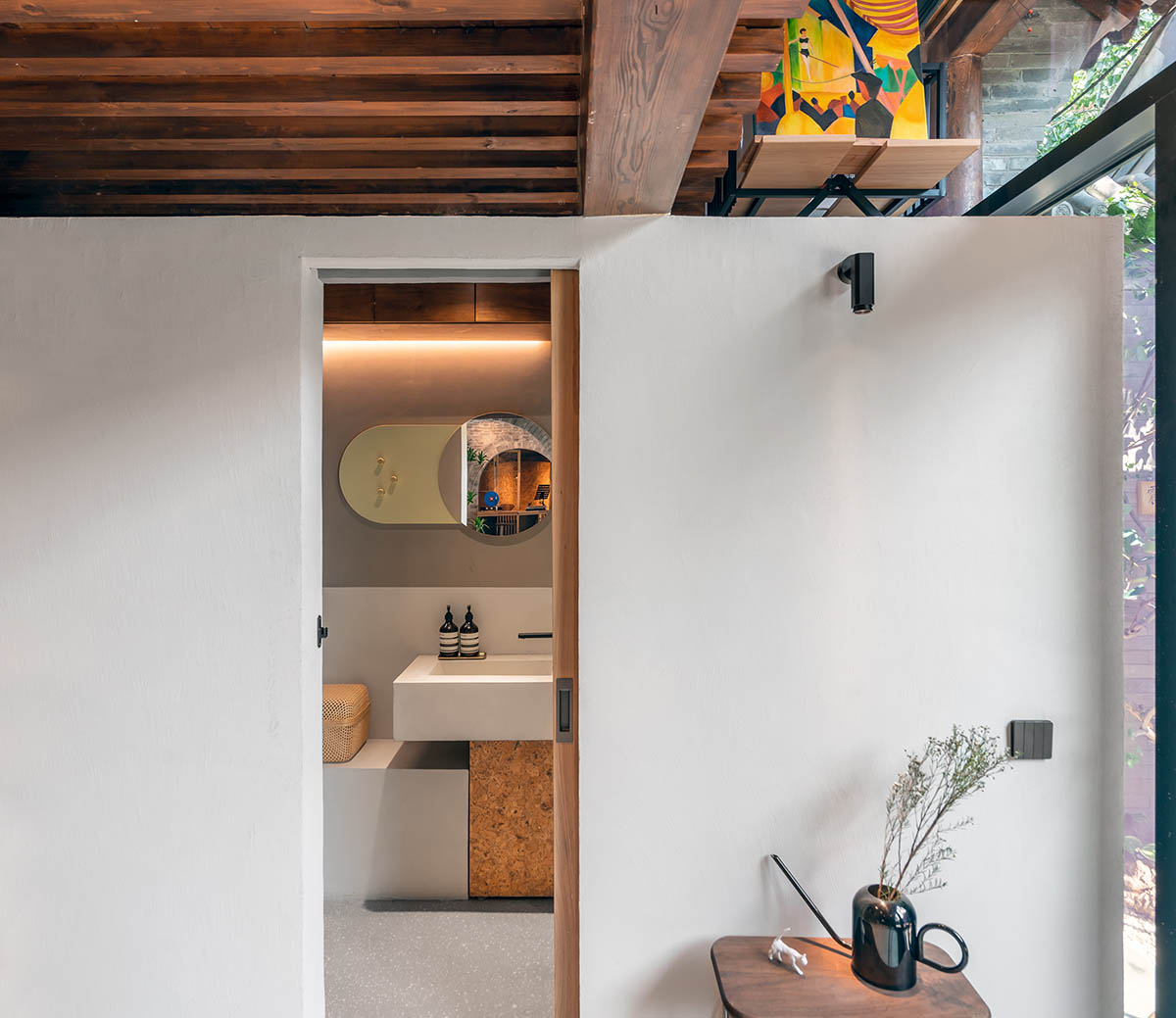 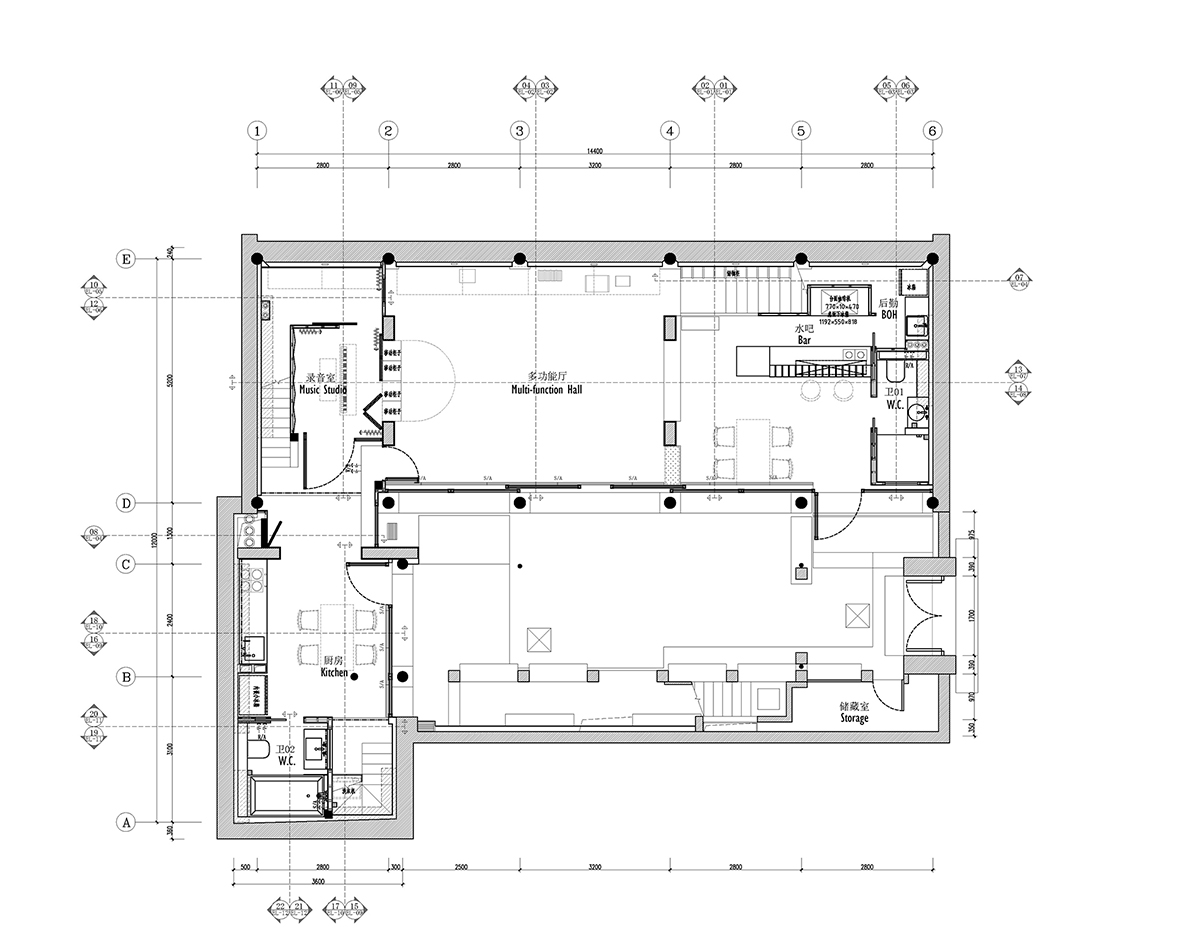 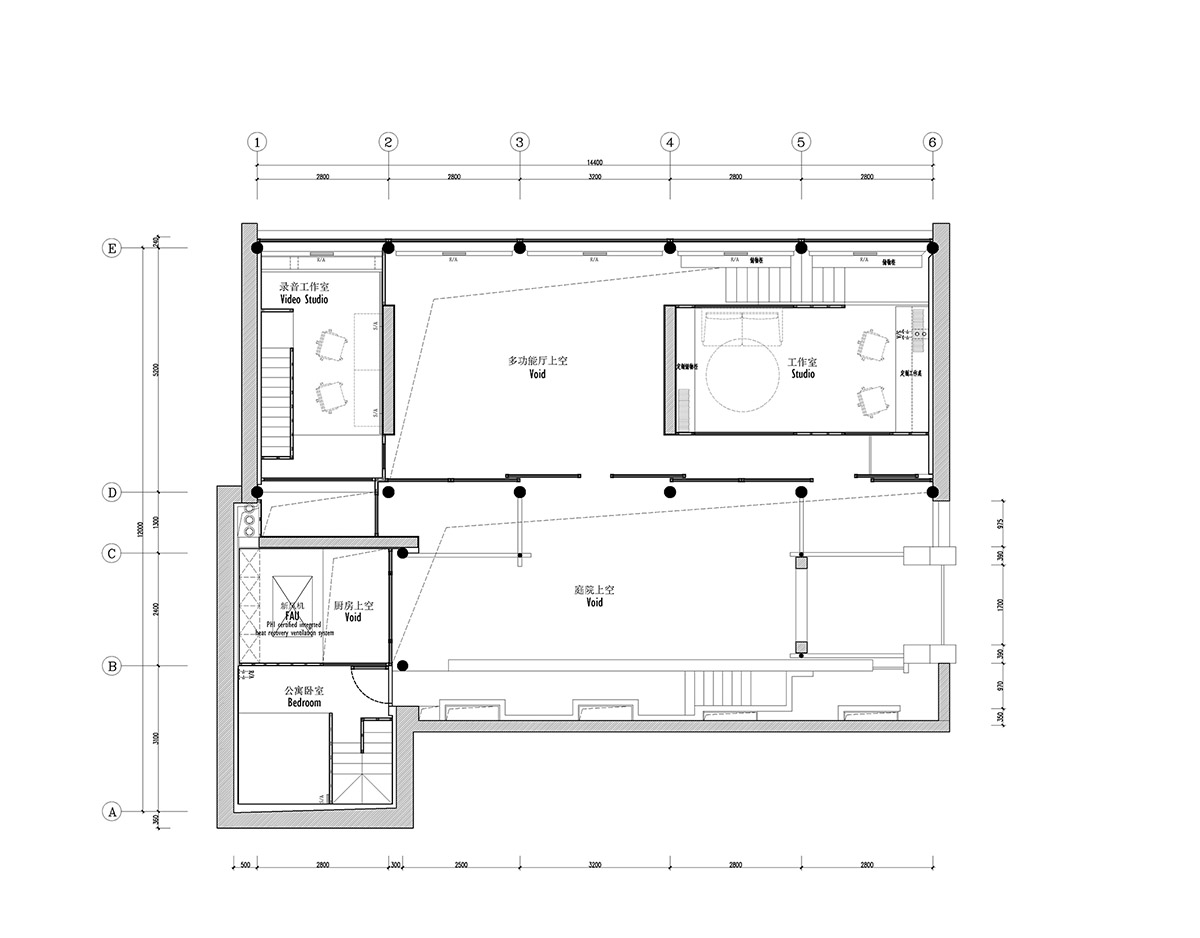 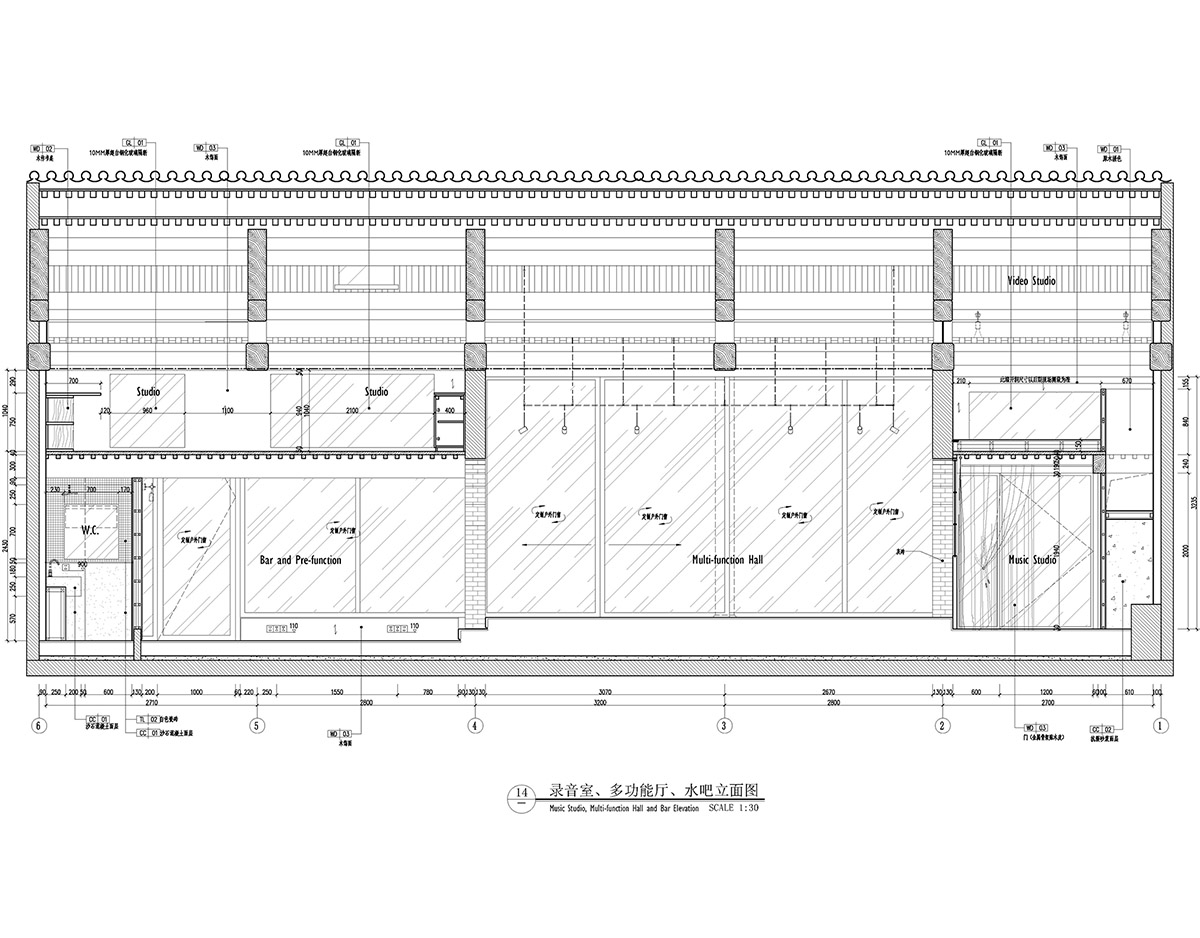 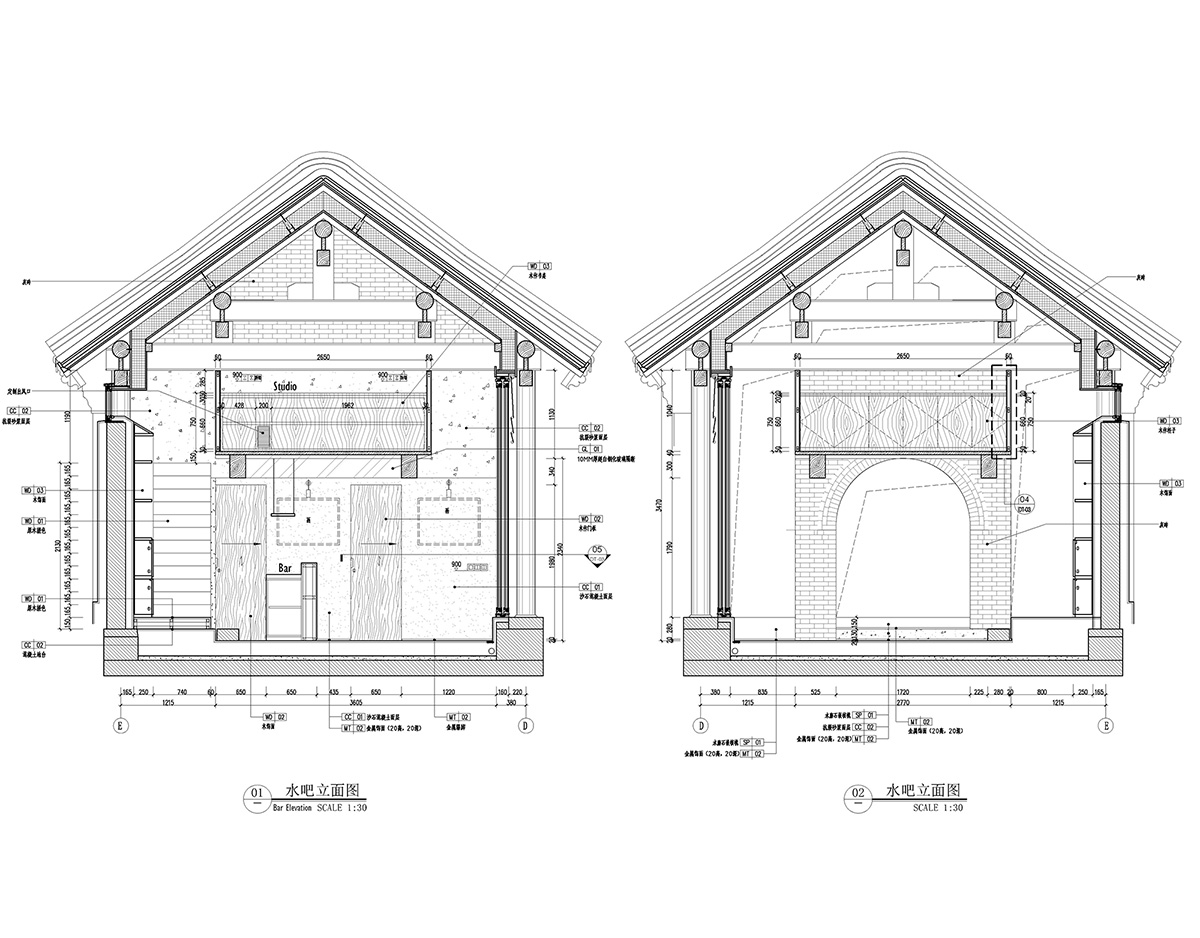 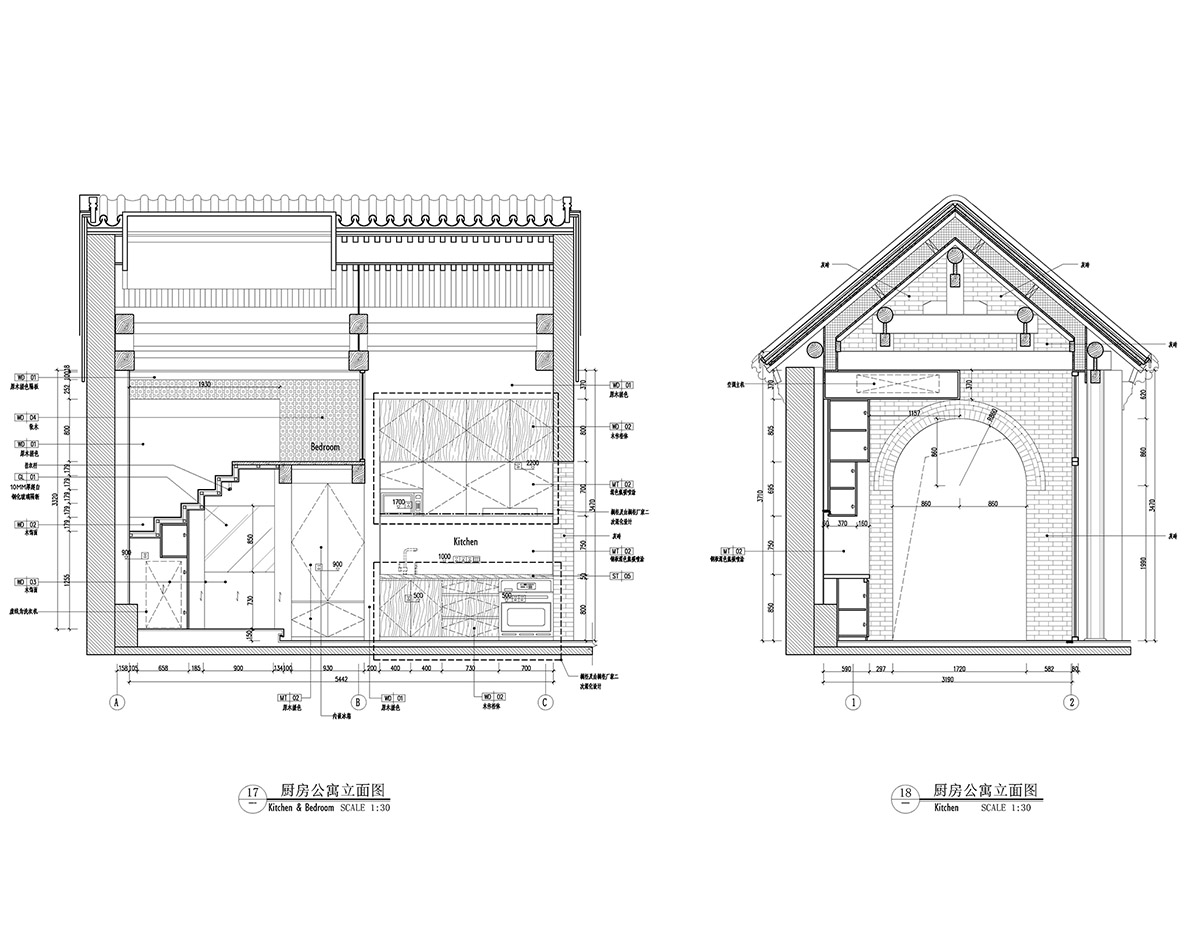 Video can be watched on this link.

All drawings © Days in YARD Studio

> via Days in YARD Studio