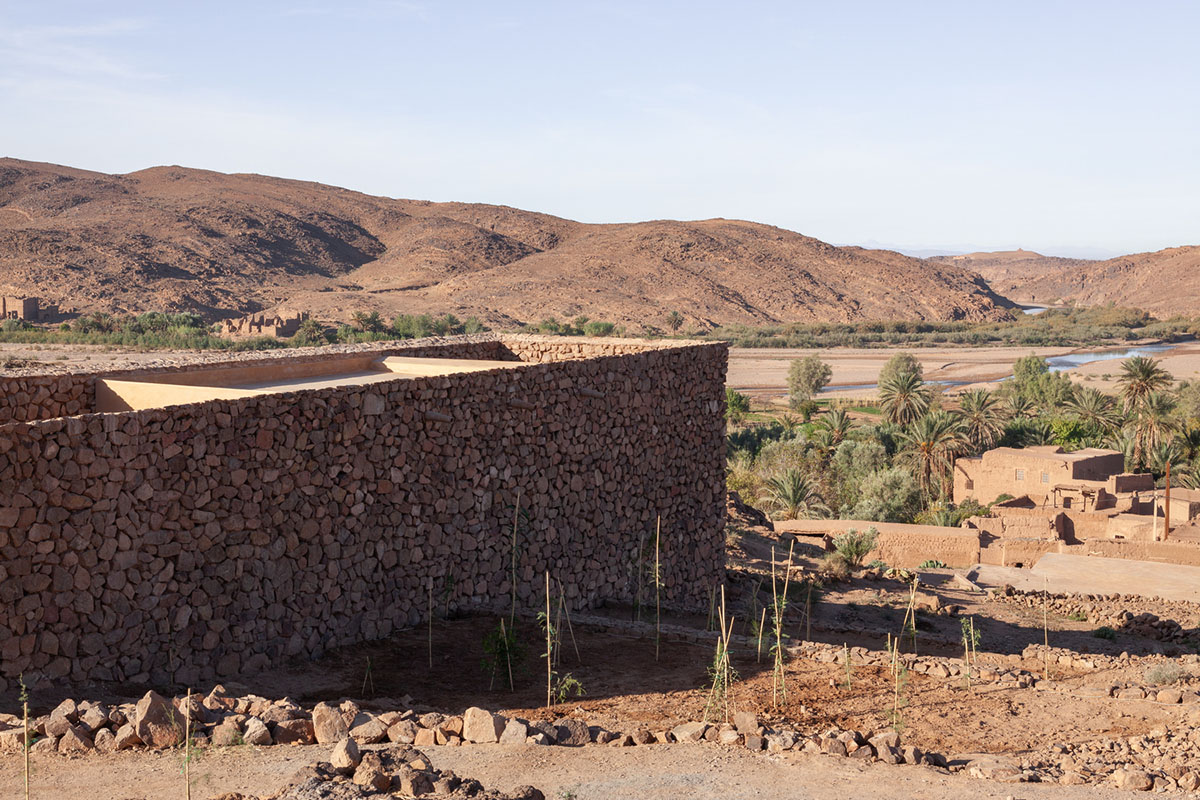 Two elongated, angularly-placed walls, made of granite rocks and earth, form this women's house in the village of Ouled Merzoug, Morocco.

Called Women’s House of Ouled Merzoug, the 130-square-metre community centre was designed by a group of architecture academics and postgraduates from Universiteit Hasselt School of Expert Education (UHasselt SEE) in Belgium, who created Building Beyond Borders. 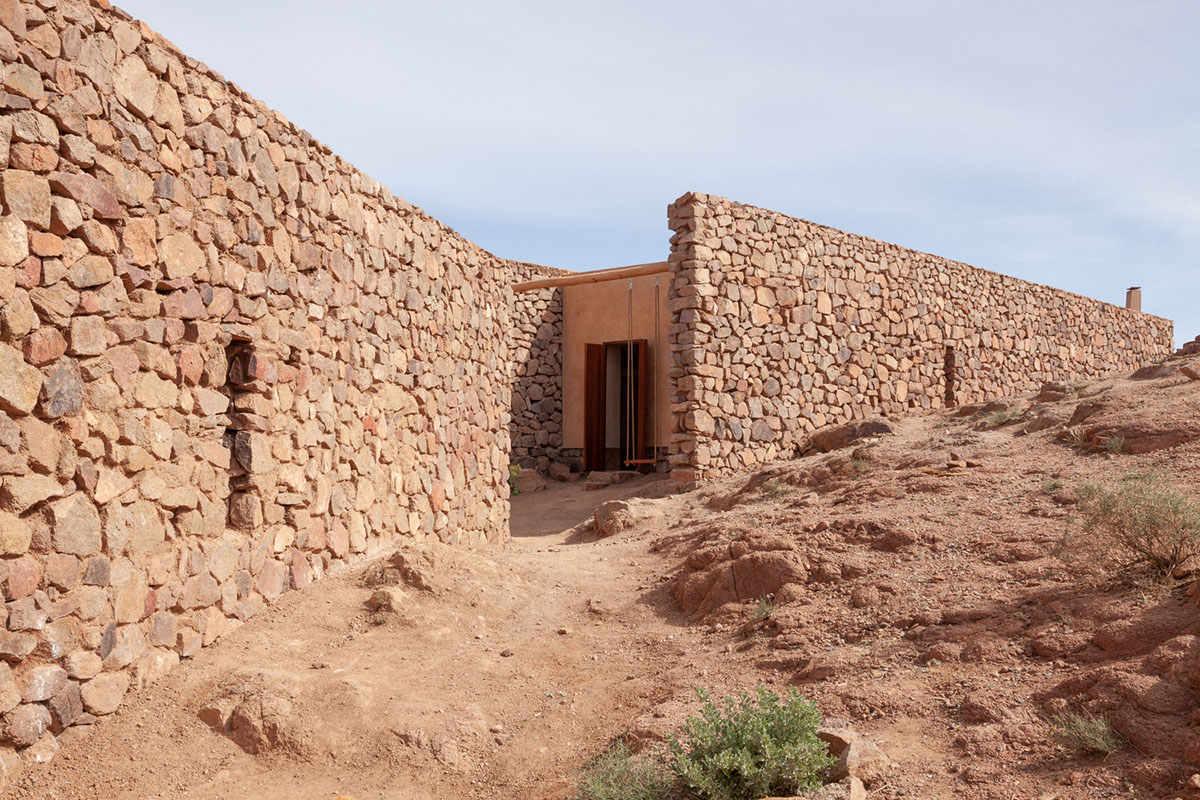 The project was entirely completed with the local participants, comprised of local women and workers by using local craftsmanship techniques.

The project comprises two volumes wrapped by granite rocks, dug out from the surrounding hills, and adobe bricks. Situated on a hilly site, the Women's House was designed to become a meeting, working and learning place in the centre of the village. 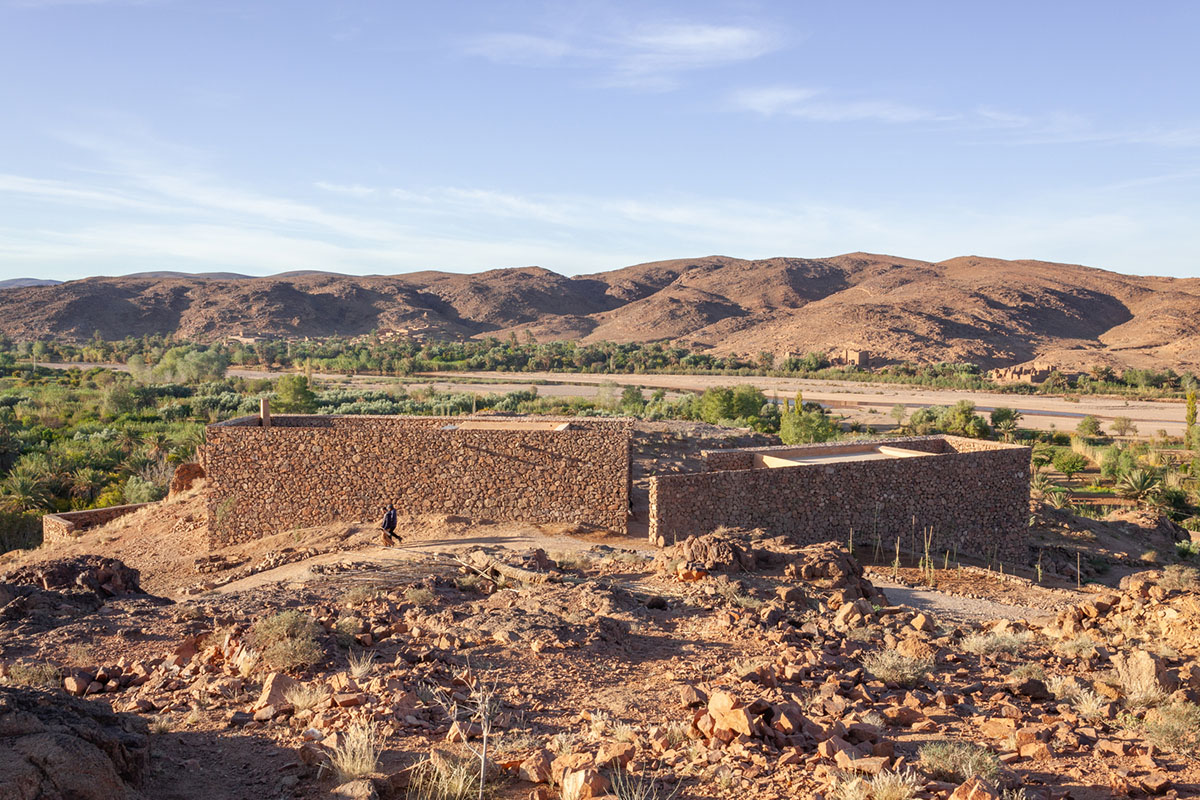 The building provides women a characteristic space where they can share their crafts with the community and visitors. "In this project, the limits of the sustainable buildings were challenged by maximizing the use of local and regenerative materials and the confrontation between traditional and contemporary building techniques," said Building Beyond Borders. 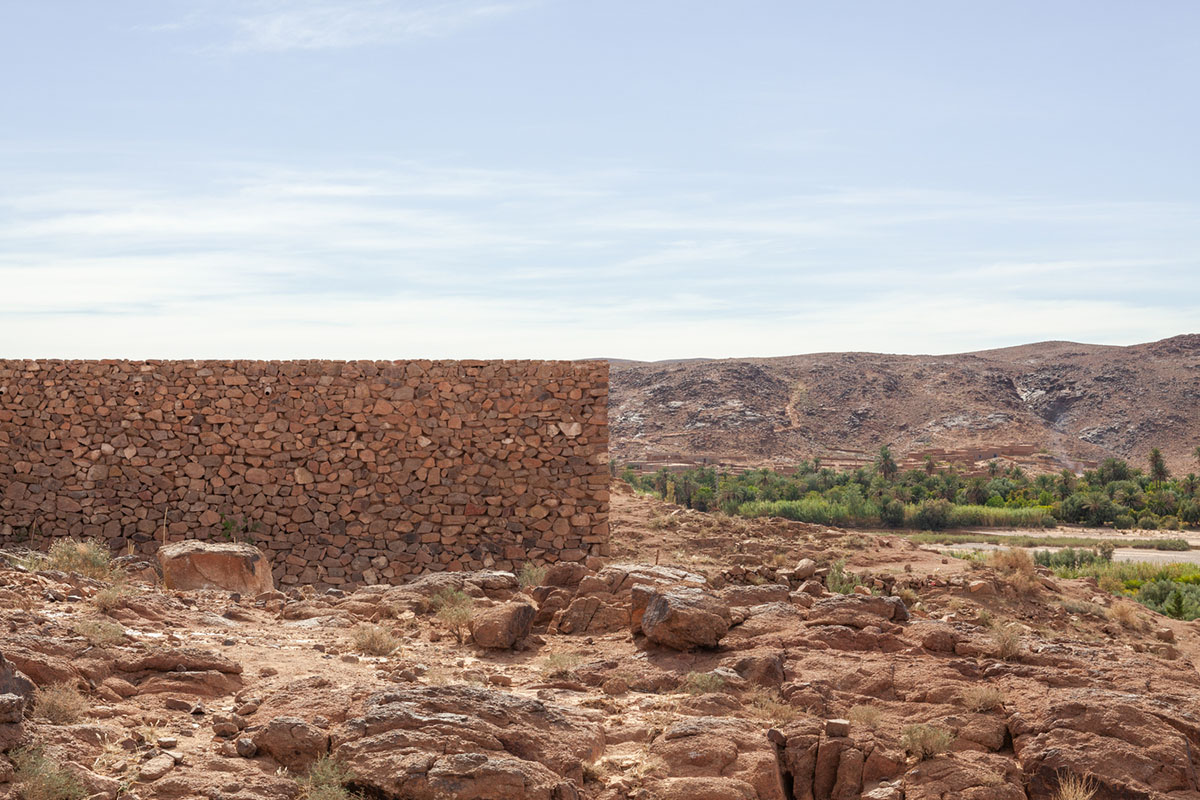 The conceptual phase of the project officially started in September 2018 and a team of architects, urban planners, interior architects, and artists came together for the first edition of the postgraduate certificate Building Beyond Borders of Hasselt University. 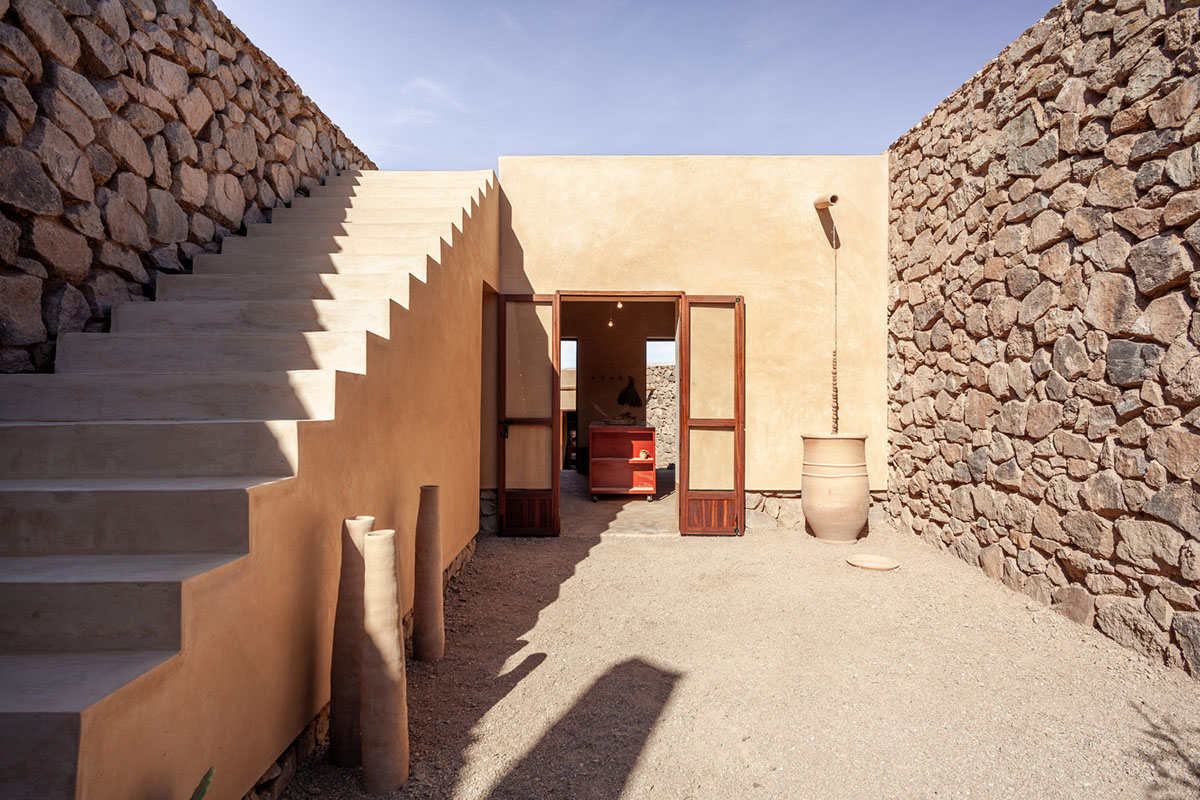 In this first edition, the project's brief aimed to build a Women's House in Ouled Merzoug, in addition to the brief, the project should have  further increased the existing relationship between BC architects & studies and the local community.

In November 2018, after the participants went to Ouled Merzoug for the first time to get to know the village and its inhabitants, the team measured the site and organized workshops with the local women to define the programme in collaboration with Harmonie Begon.

"After an intense design period in Hasselt, the foundation works started in April 2019. In December 2019 the keys were handed over to the Women's Association," added Building Beyond Borders. 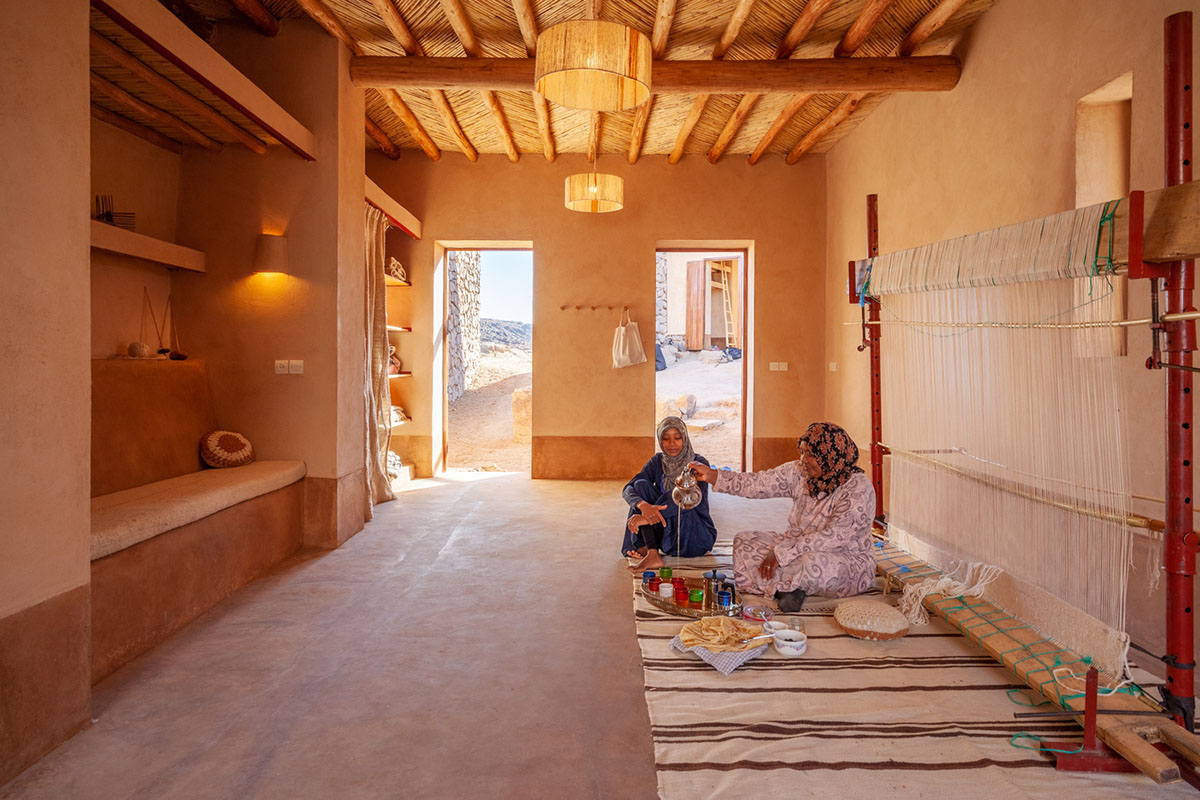 On the hill, the project is situated on the crossing of informal paths. The building plot has some particular characteristics. It is located on a slope, in a gully leading the water from the mountains to the agricultural fields of the ‘Palmeraie’ and the river during periods of heavy rain.

Locals walk by regularly, as two main shortcuts run over the site. While one path connects the main road and centre of the village with a square for religious festivities and the graveyard, the other one passes by a sequence of important public spaces such as the soccer field, the preschool, and the primary school. 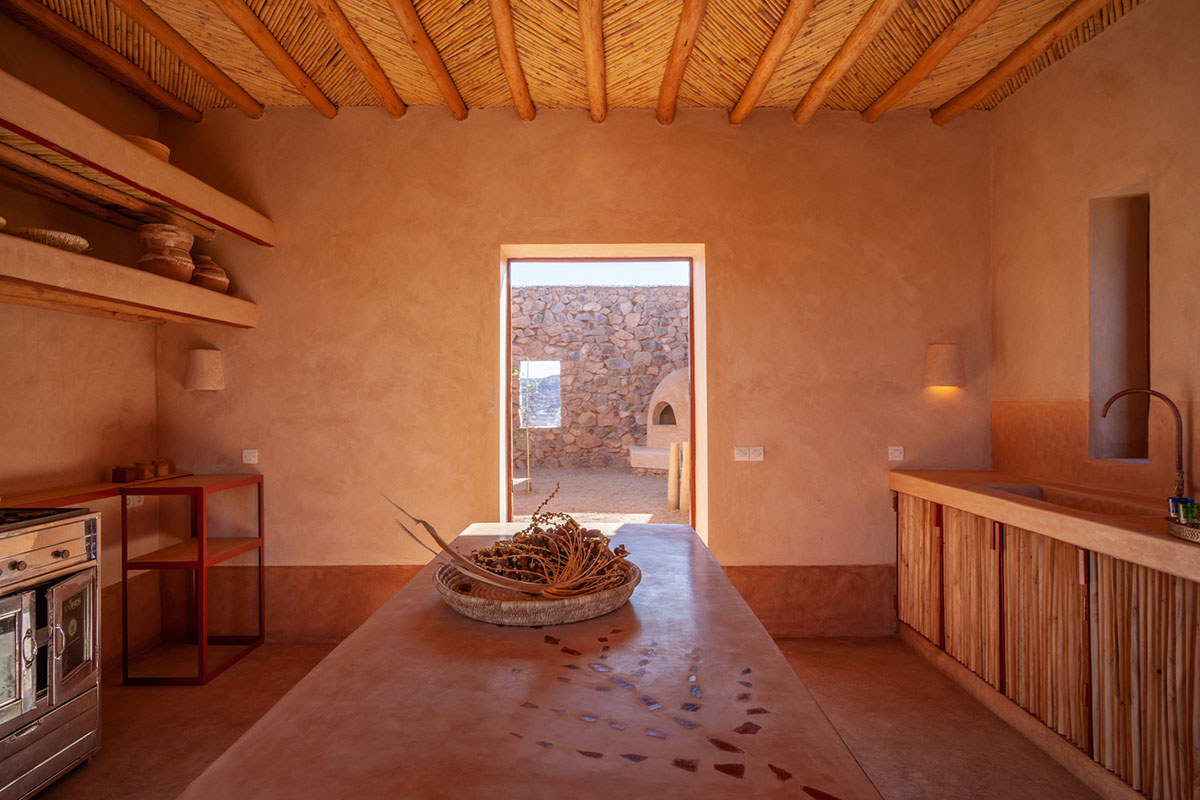 The project creates two façades. The characteristic features of the site defined the shape of the women's house. The house is not built in the center of the gully but along the ridge of the hill.

Following the natural topography of the site, the Women’s House comprises two volumes, each positioned in a slightly different direction. In its specific positioning, the House aims to create connection with both sides of the village. The main façades at the ends of the building capture two beautiful panoramic views: sunrise over the mountains and sunset over the river. 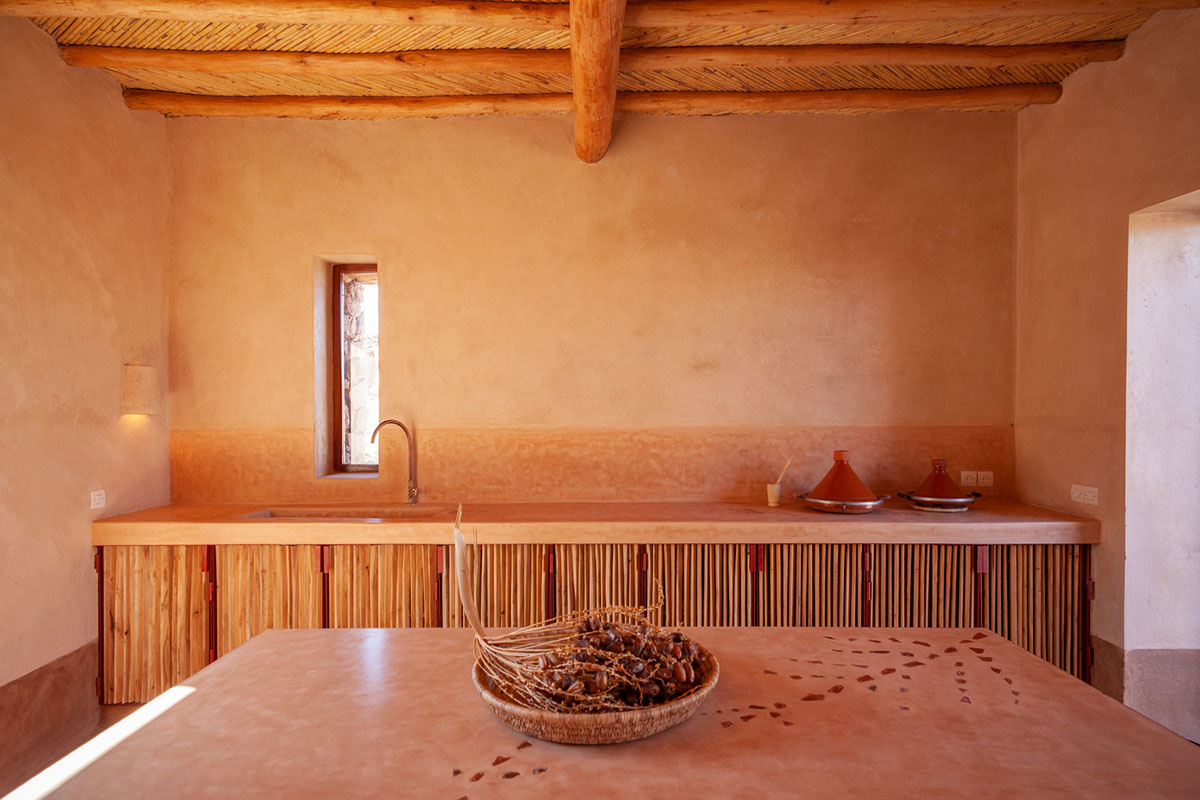 "The public character of the Women’s House is emphasized by placing the building on the crossing of the two informal paths. The main path leads the villagers directly to the heart of the building," Building Beyond Borders added. 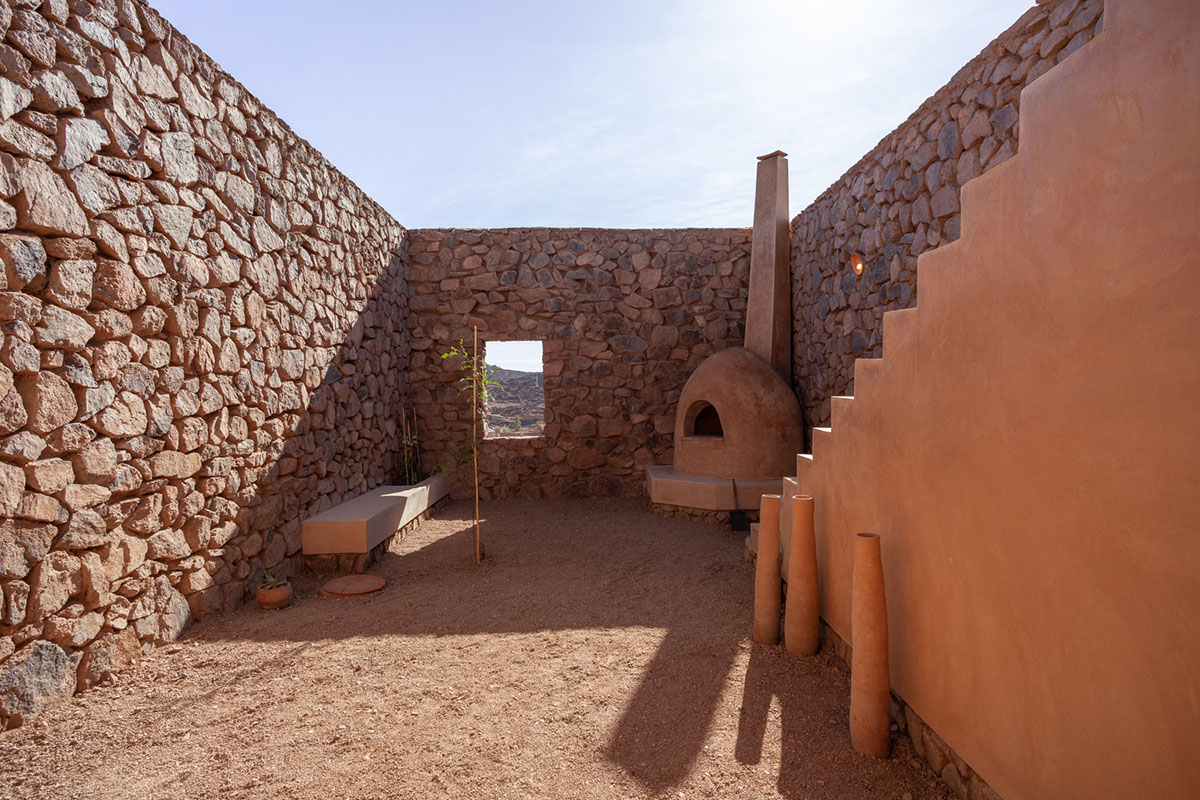 From center to end, from public to private

An access to the Women’s House is provided through a central meeting place, a public heart, named the ‘cour’. The cour connects the two volumes of the house: a workshop space, the ‘atelier des femmes’ and a communal baking house, the ‘boulangerie commune’.

Another space, called The Atelier, provides a place for meeting, teaching and learning, spinning and weaving. In the Boulangerie the women can enjoy sharing meals together, bake and sell homemade bread and pastries. Whereas the center of the building is the most public, the ends are the most private. 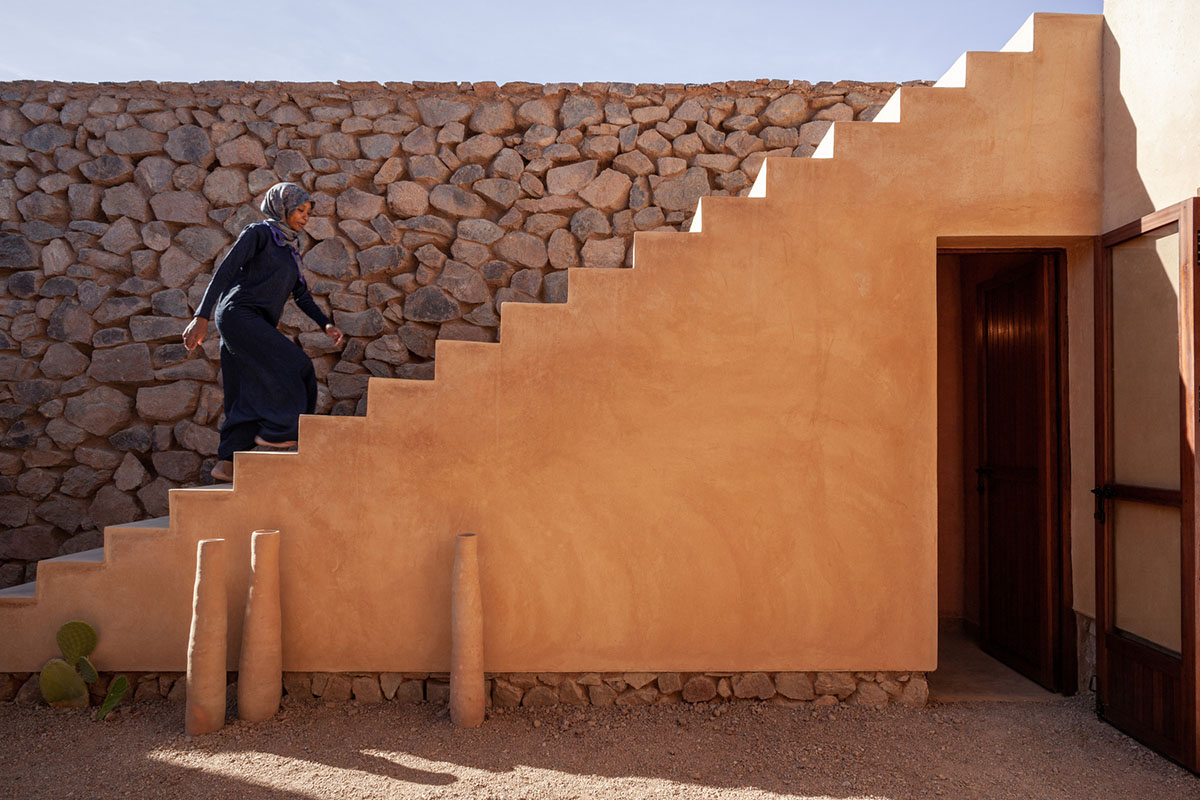 Each volume gives access to an intimate garden. Apart from being areas for leisure and resting, the gardens are designed and furnished to enhance the program of the adjacent spaces.

The large sink on the bench of the ‘atelier’ garden makes it possible for the women to wash and color wool. In the cob oven in the ‘boulangerie’ garden, women can experiment with new recipes. 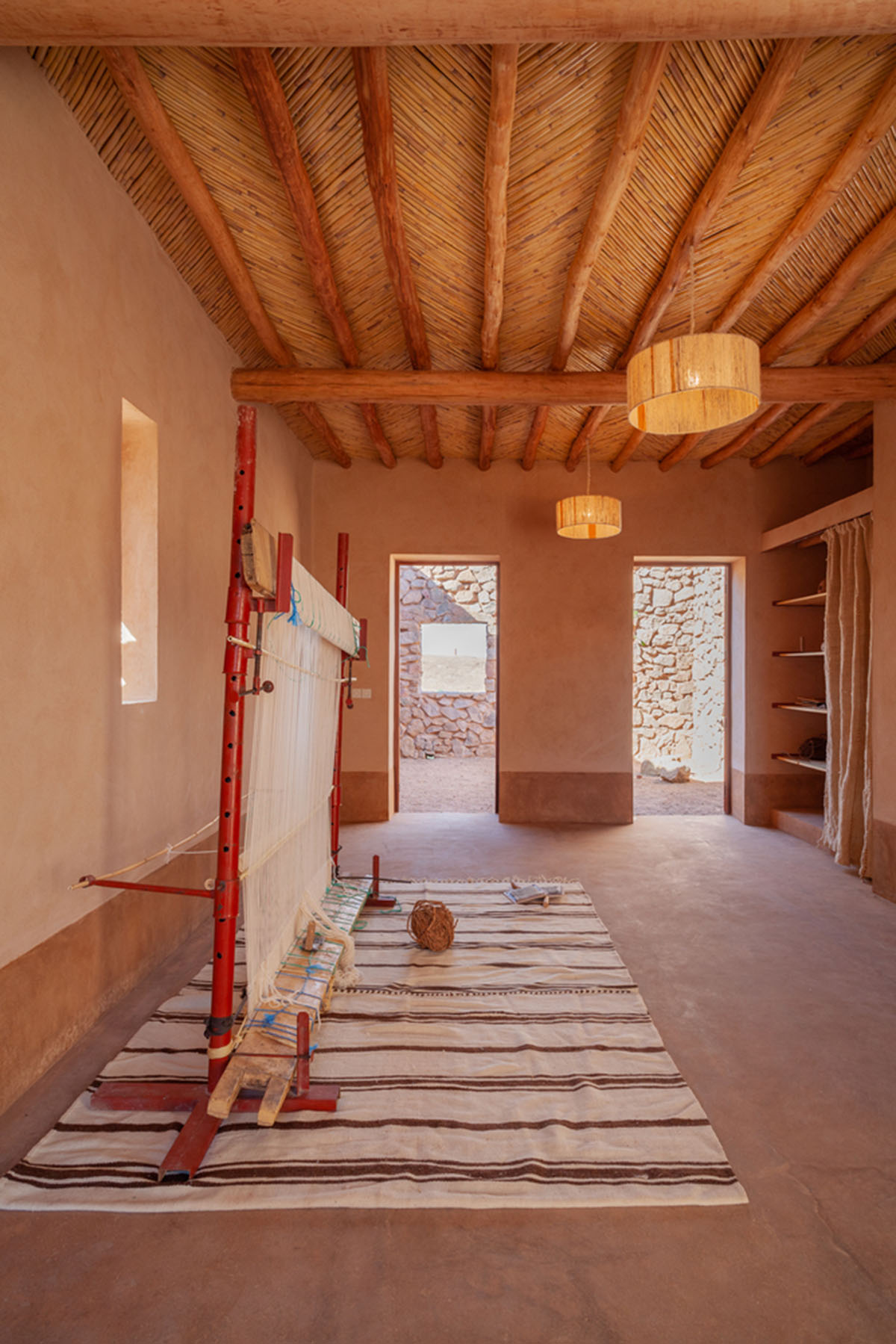 The construction process and the use of materials with local participants were the key principles to minimize the amount of construction waste. For the envelope of the building, the team used pieces of granite rock that were dug out from the surrounding hills, while the team uses adobe bricks for the inner walls. 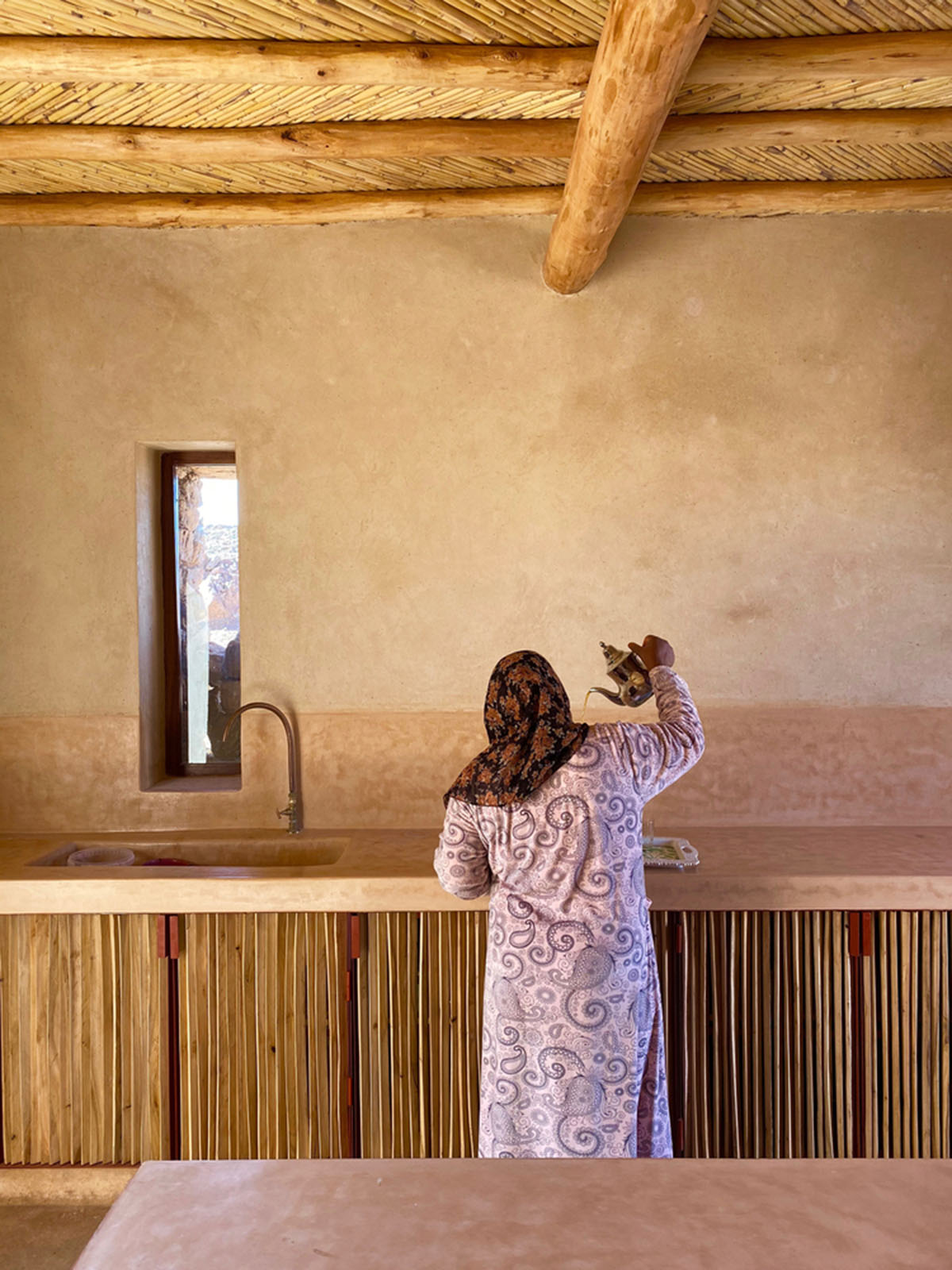 "While the roof span of the building is based upon the maximum length of the eucalyptus beams that can be found on the local market, the ceiling is made out of a reed that grows in the ‘Palmeraie’," the studio added.

"As for the finishing of the walls and floors, different mixes of local earth, river sand, lime, and straw are used. By the virtue of the close collaboration between skilled local workers and foreign architects, and thereby the confrontation of traditional and new building techniques, it was possible to reinvent and explore new construction details during the building process." 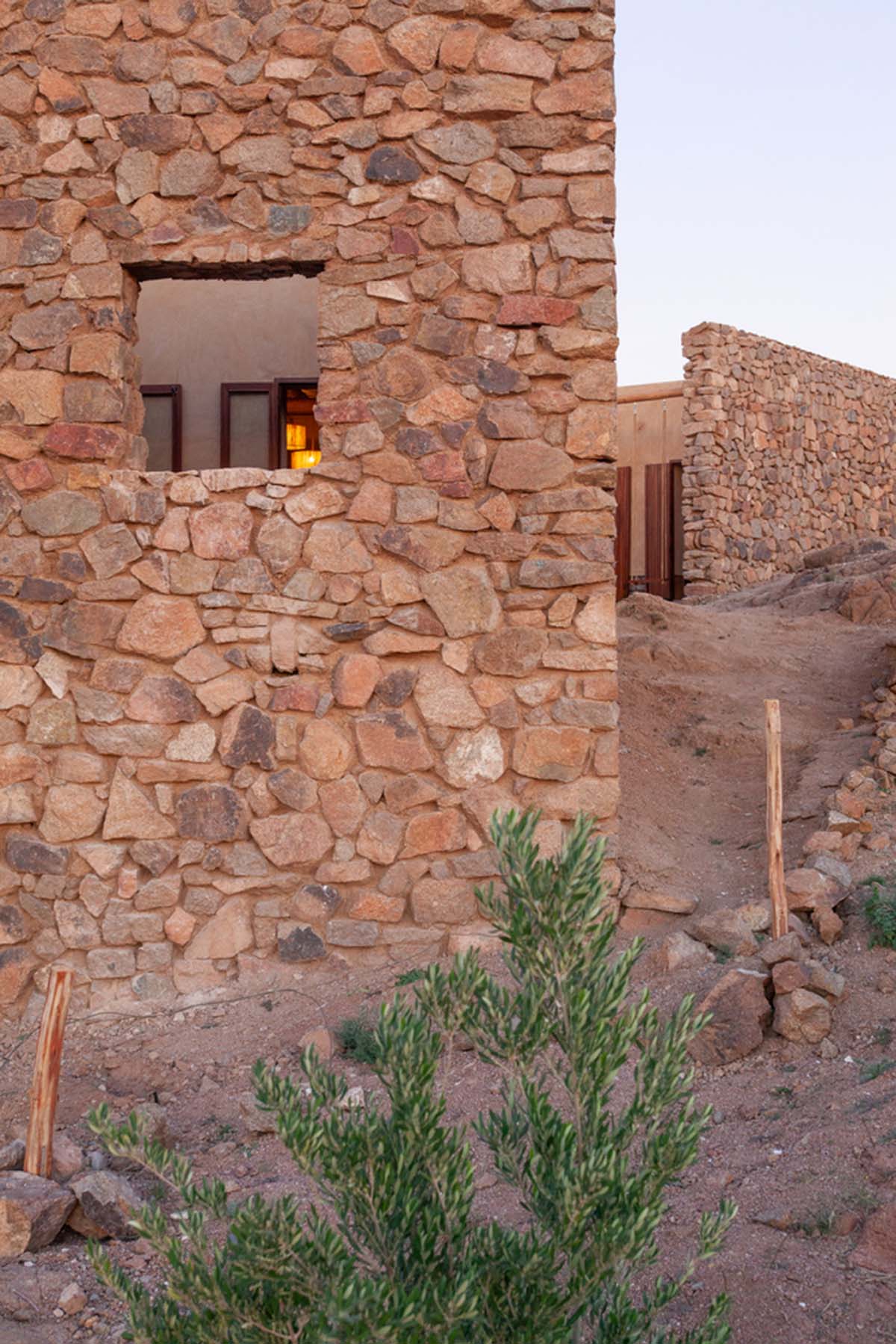 Collaboration with local people, specifically with women, was a key principle lying at the heart of the project. The use of local materials was put in the spotlight.

The women designed and wove the curtains and helped with building the cob oven in the garden of the bakery. The doors and eucalyptus beams under the kitchen counter were made by local woodworkers. The exterior lamps and ceramic objects were shaped together with the local potter. 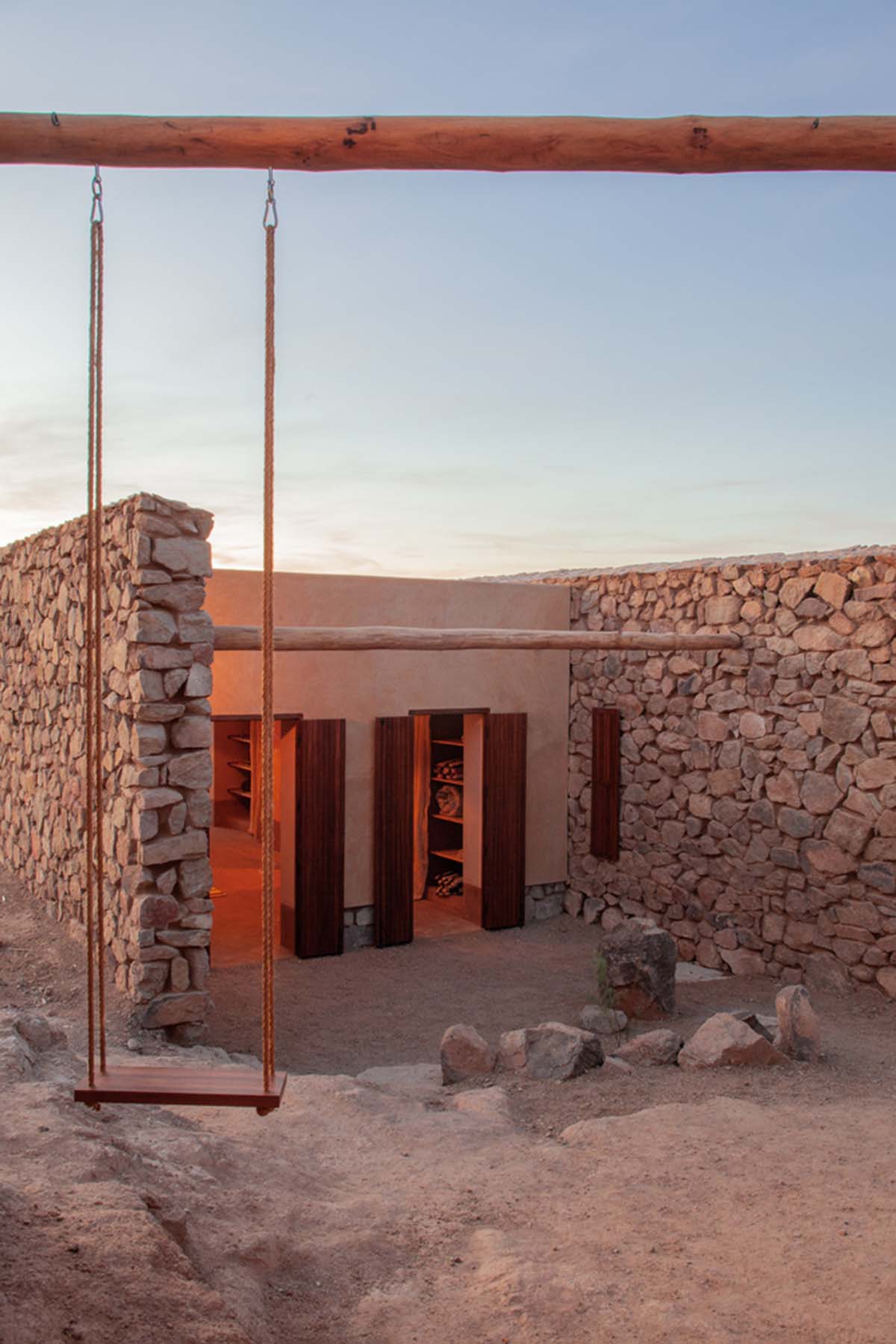 Next to the building, in the gully, the local community also created is a forest garden created by using the naked rocks. This garden was created to bring biodiversity and shade to the hill site and to be a new public space for the village of Ouled Merzoug.

Next to that, the terraced garden was created with its dry-stacked walls that help slow down the running of rainwater. According to the team, this results in better water infiltration and a reduction of the amount of eroded material flushing towards the main road and further down the ‘Palmeraie’.

The different species of native forest trees and shrubs were planted by the team of local workers, women of Ouled Merzoug and other villagers. 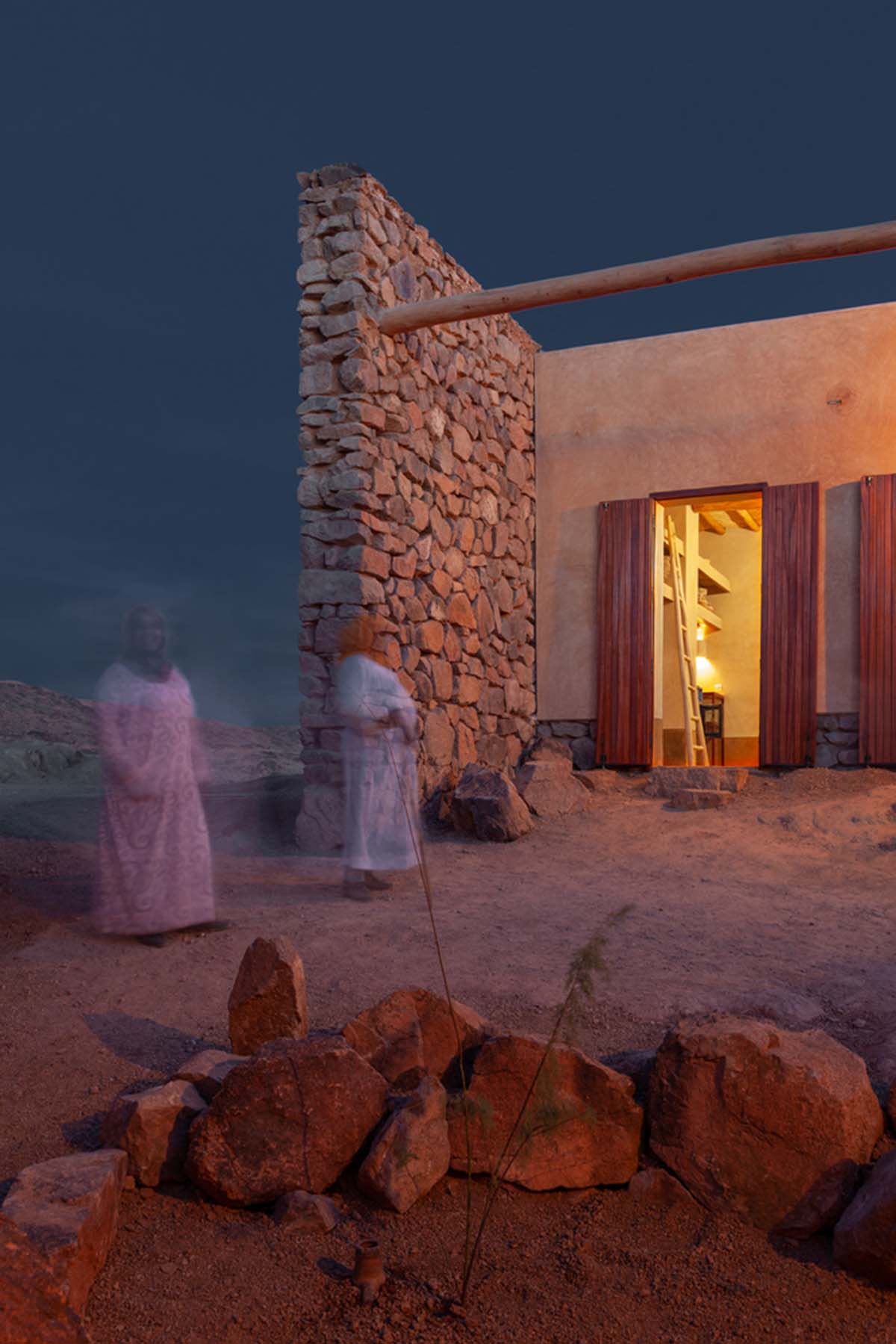 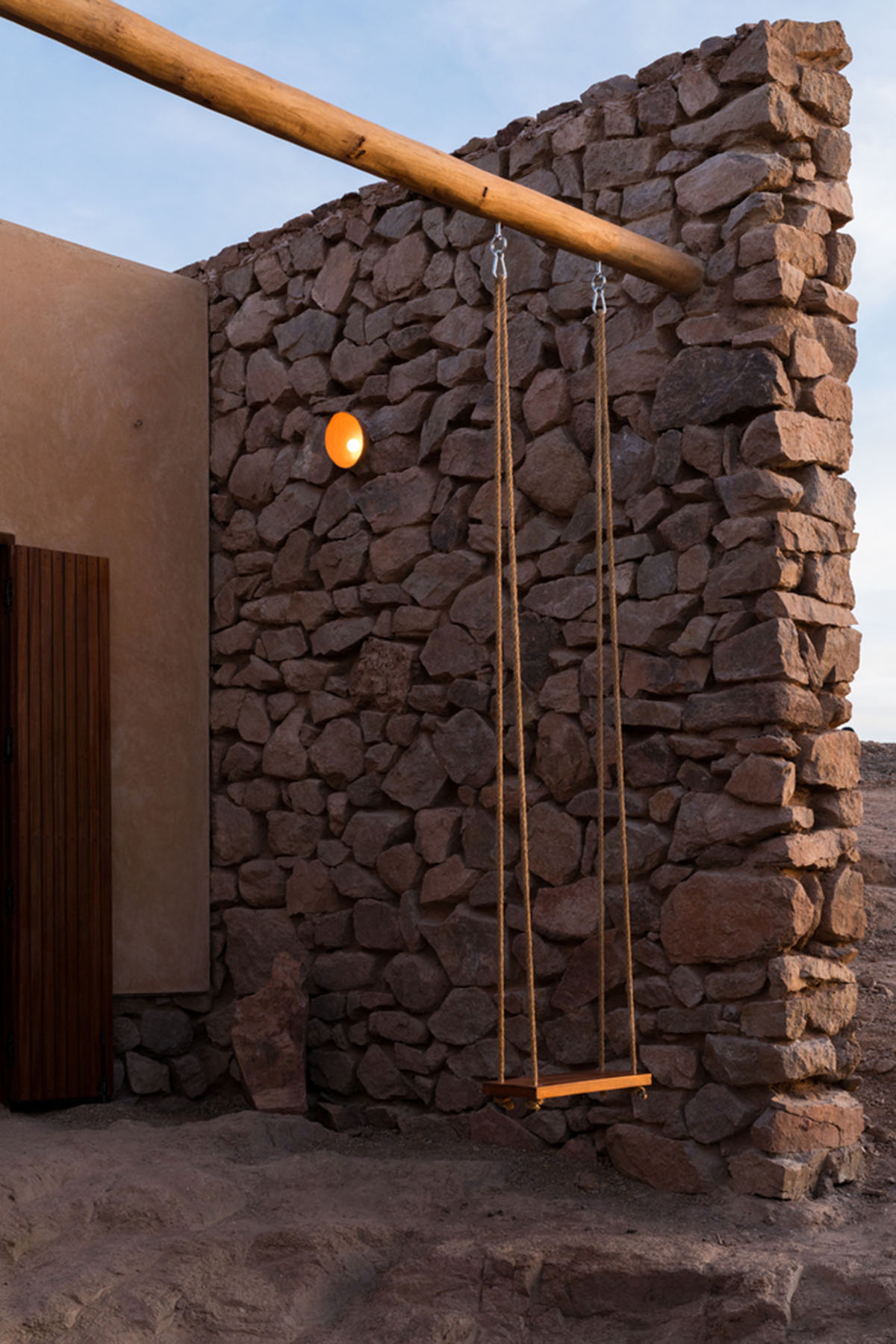 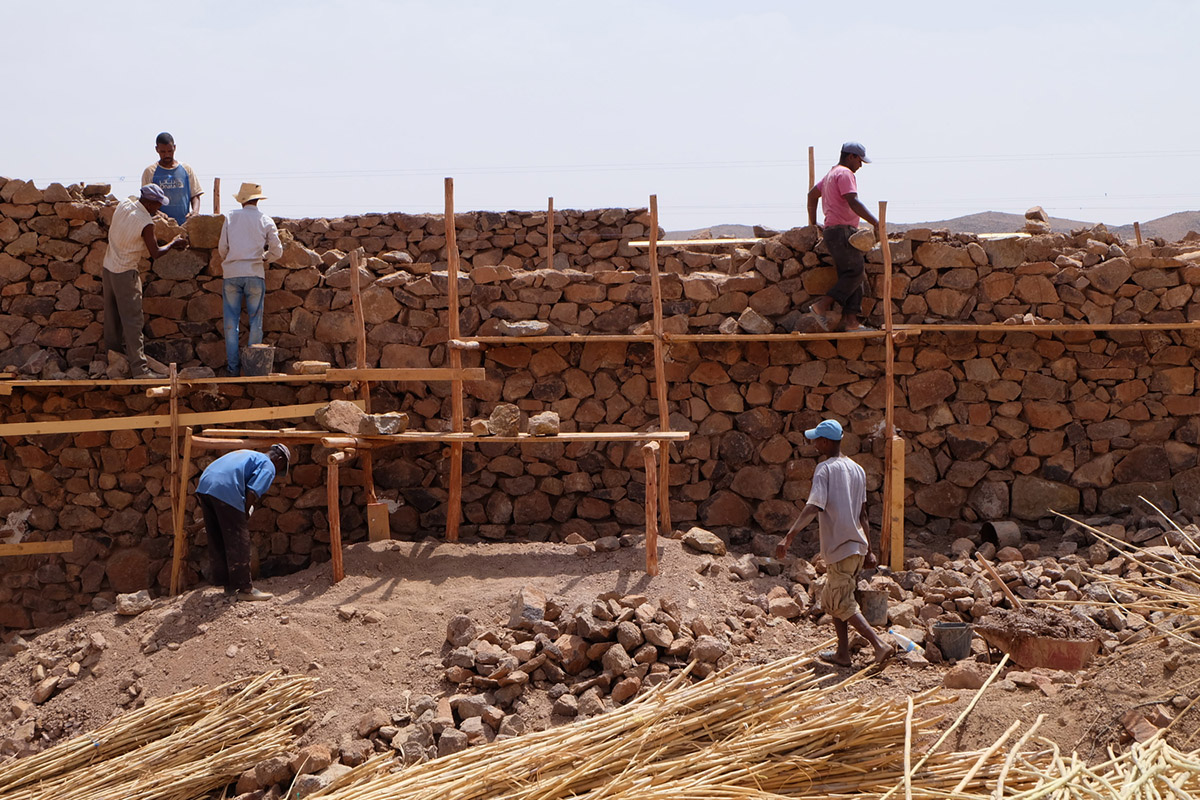 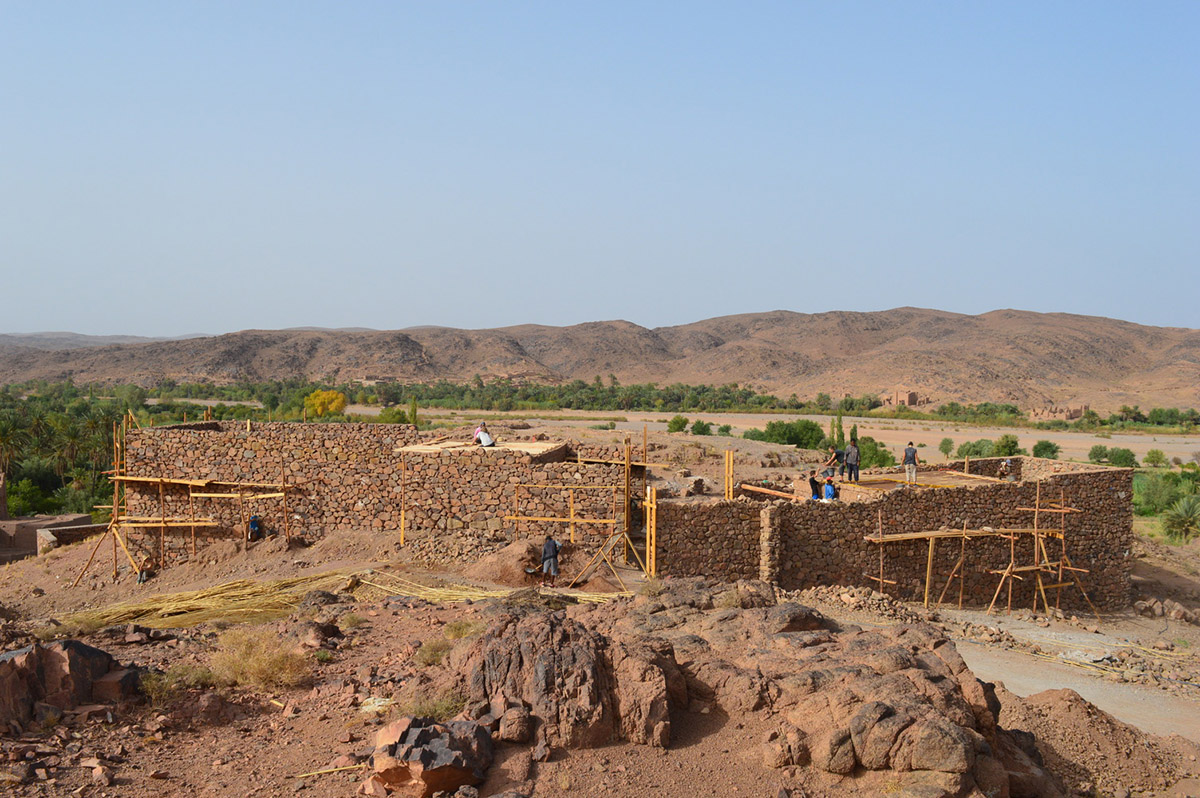 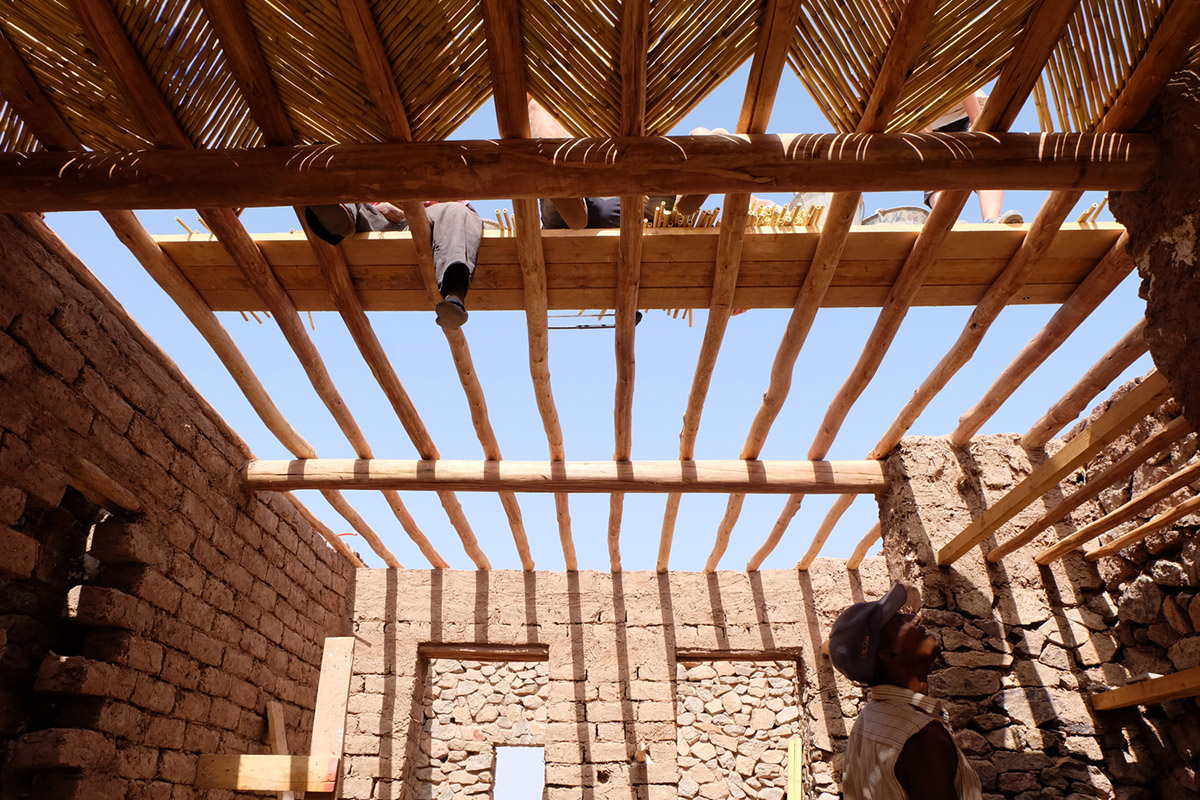 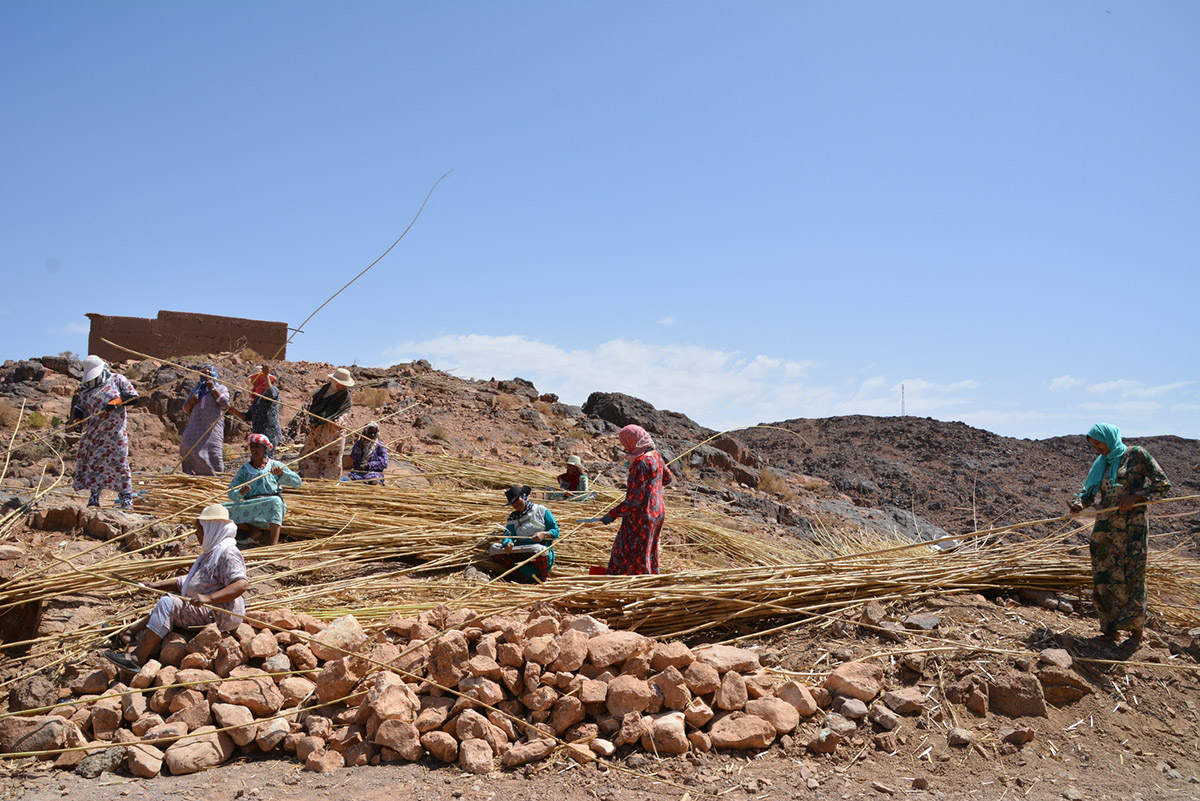 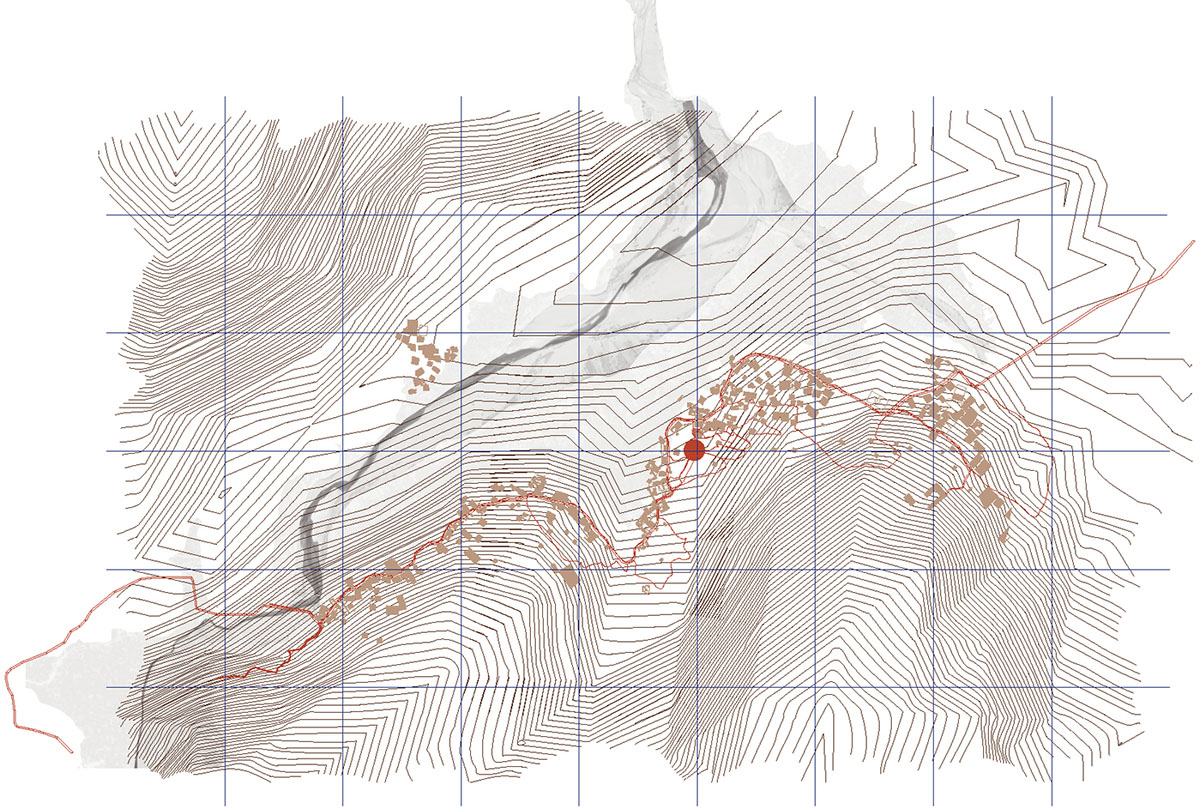 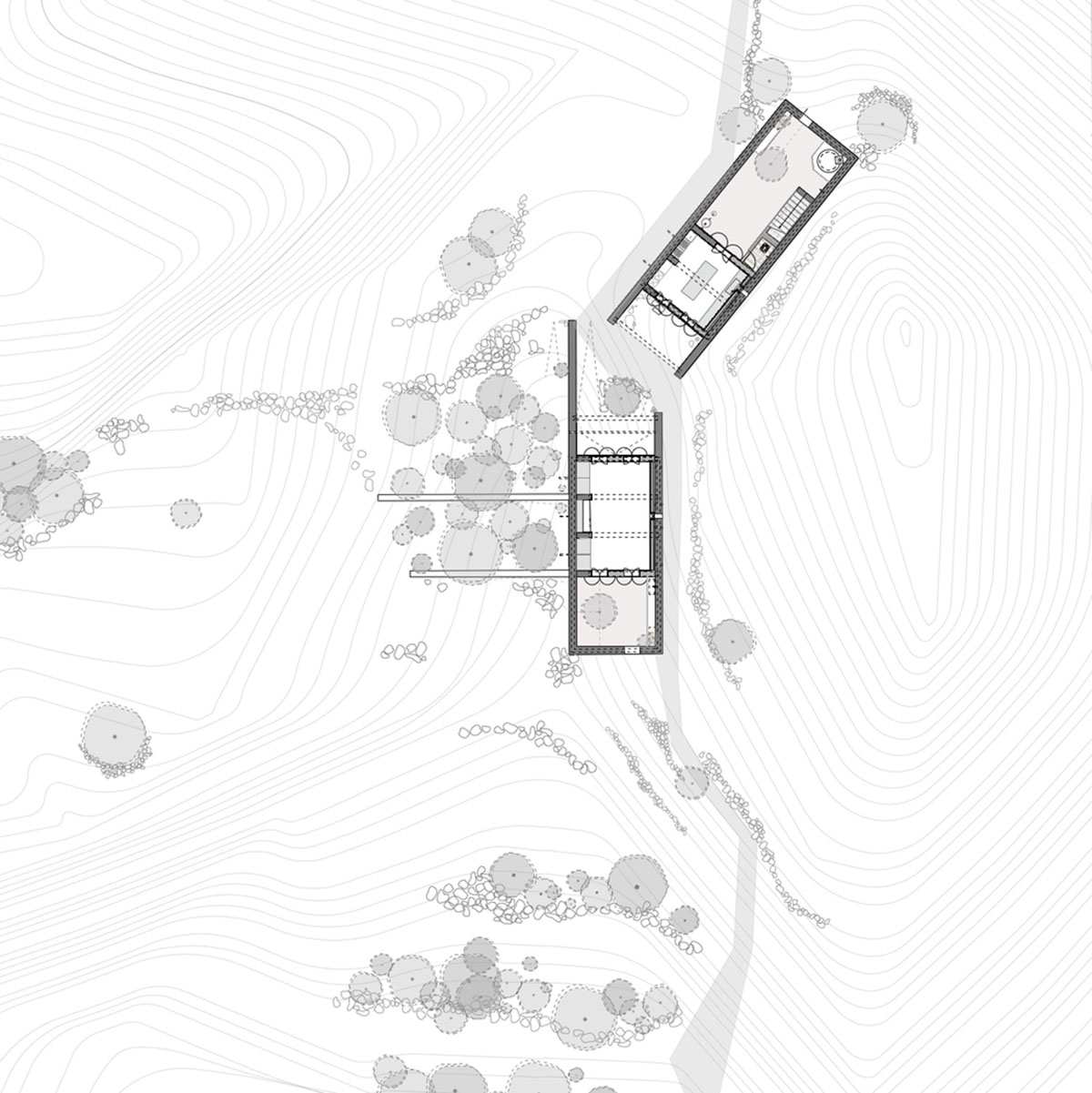 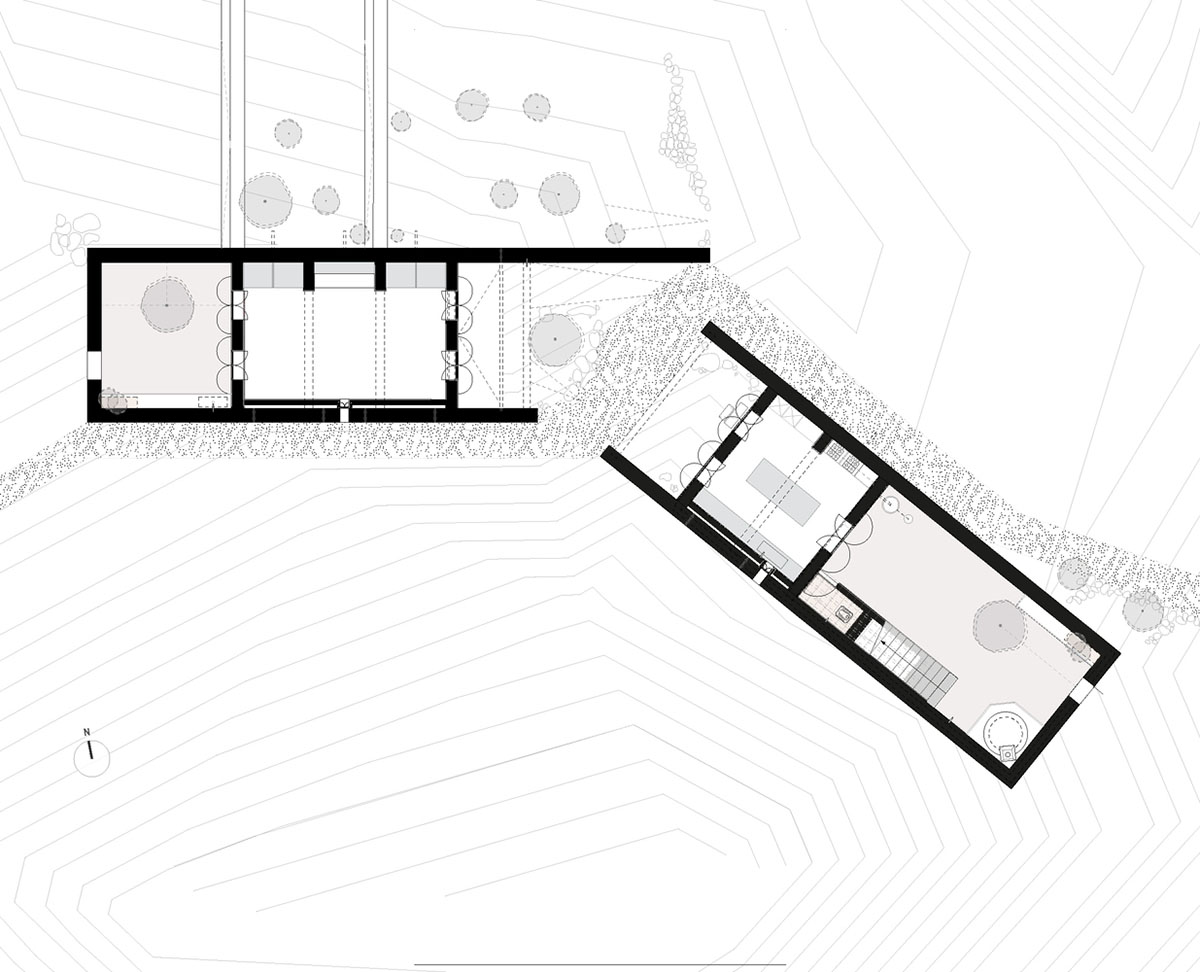 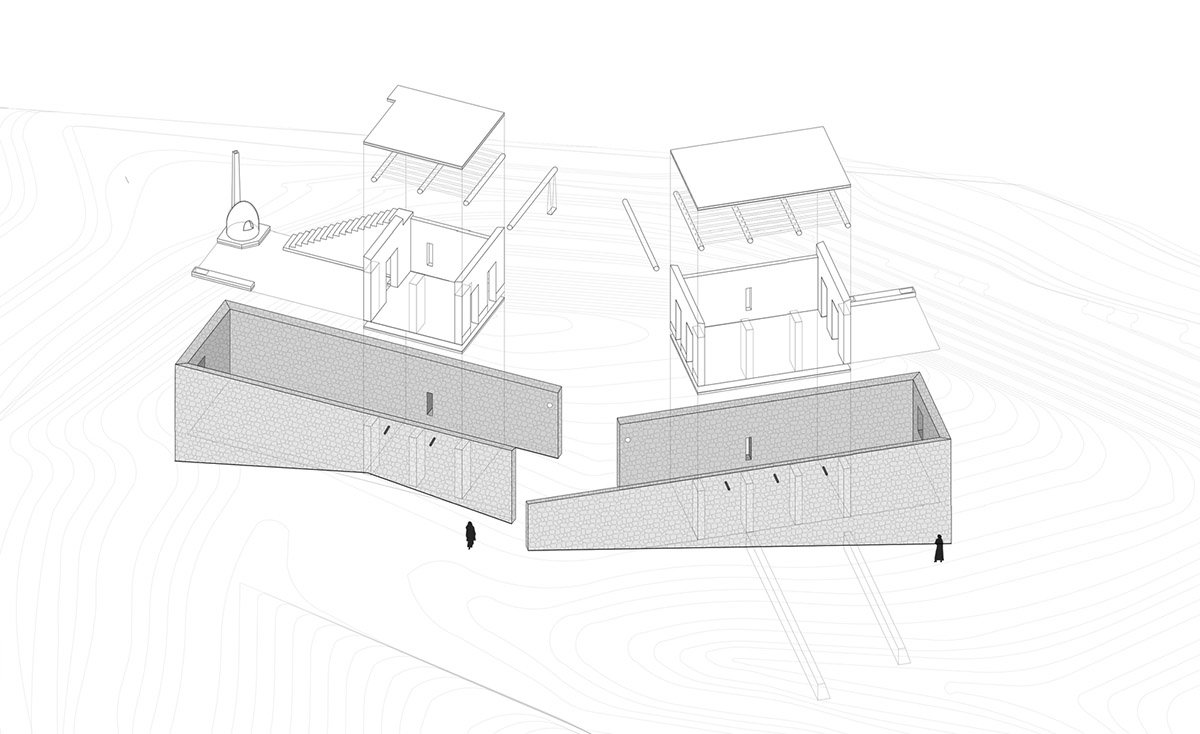 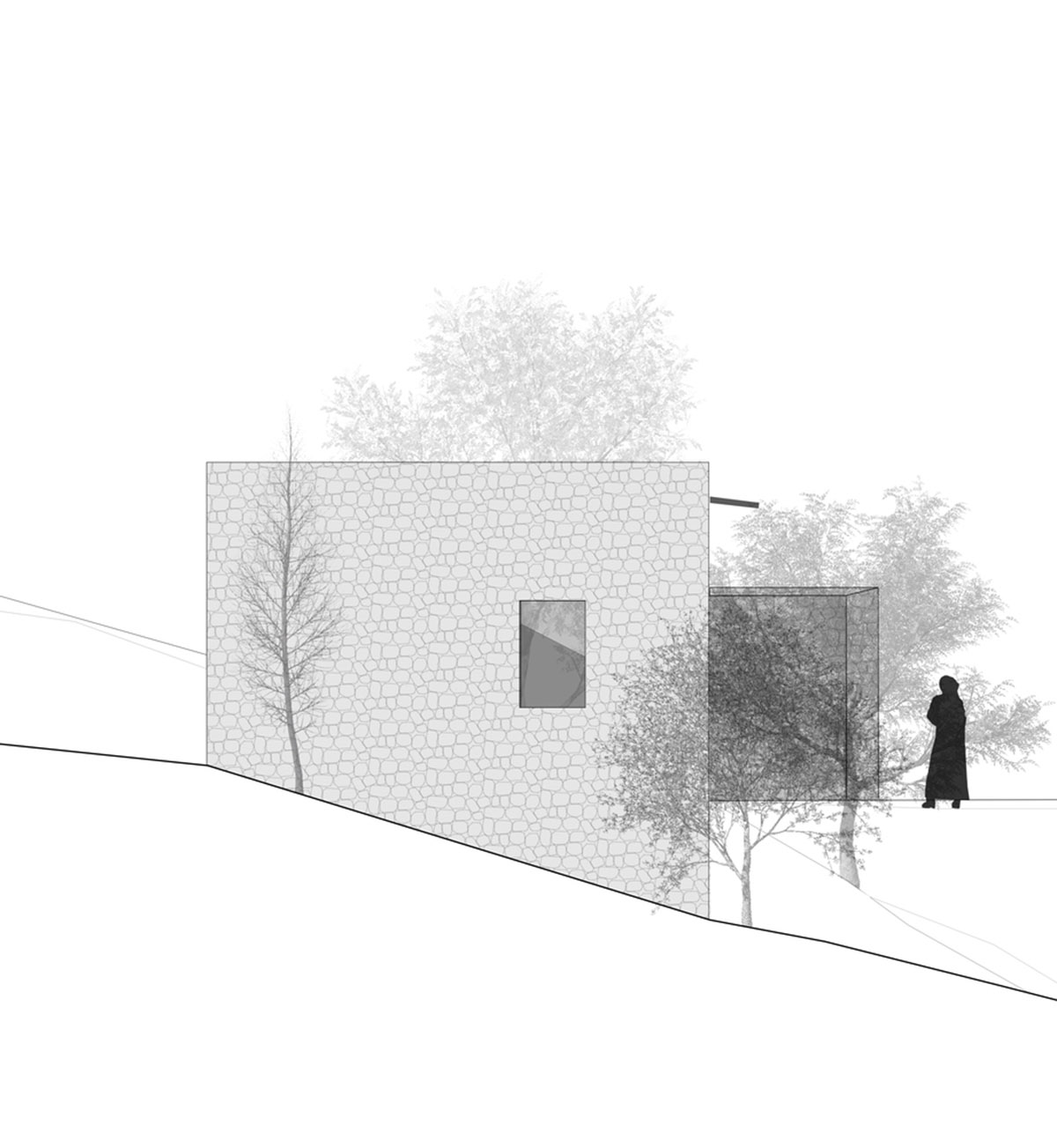 Project Initiators And Academic Tutors: Academic team of the UHasselt postgraduate certificate Building Beyond Borders and BC architects & studies.

All drawings © Building Beyond Borders

> via Building Beyond Borders