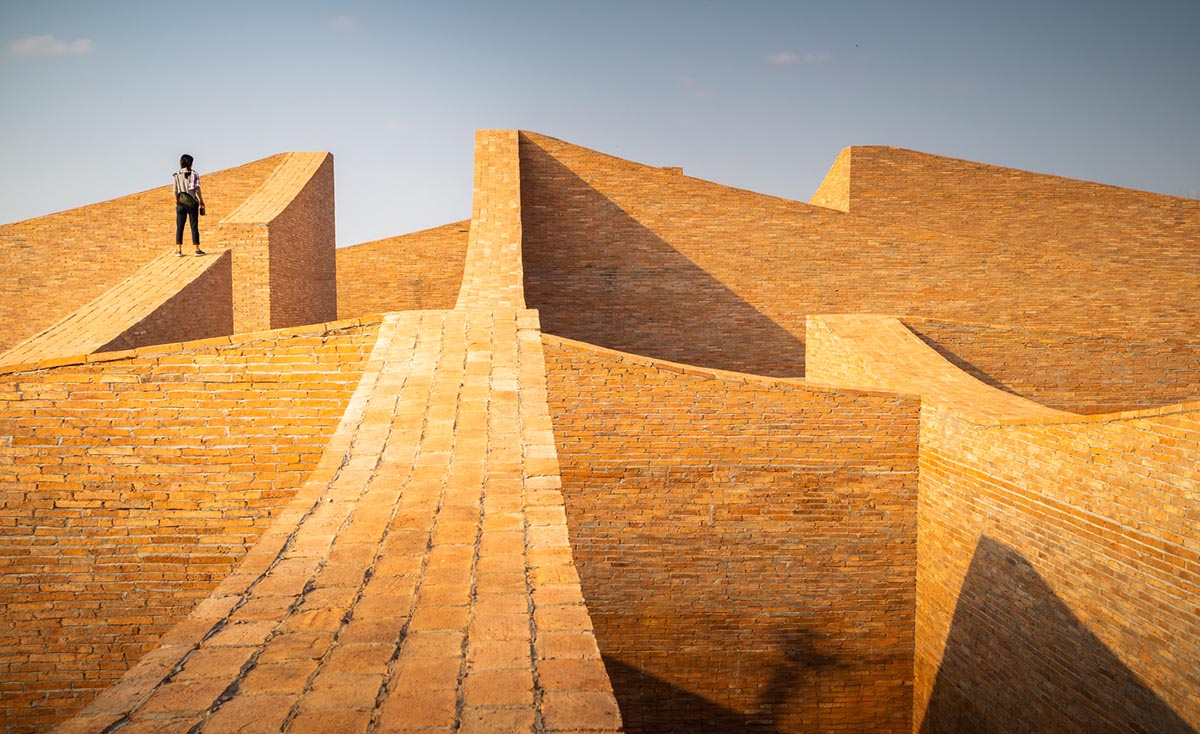 Bangkok Project Studio has used over 480,0000 fired clay bricks to form an elephant museum with curved walls that are walkable and accessible from every direction.

The project, Elephant Museum - Elephant World, addresses to a relationship between Thai people and elephants which have a special status in Thailand.

This project was designed to strength this relationship in a more tangible way, that can both people and elephants can live and walk together in the museum. 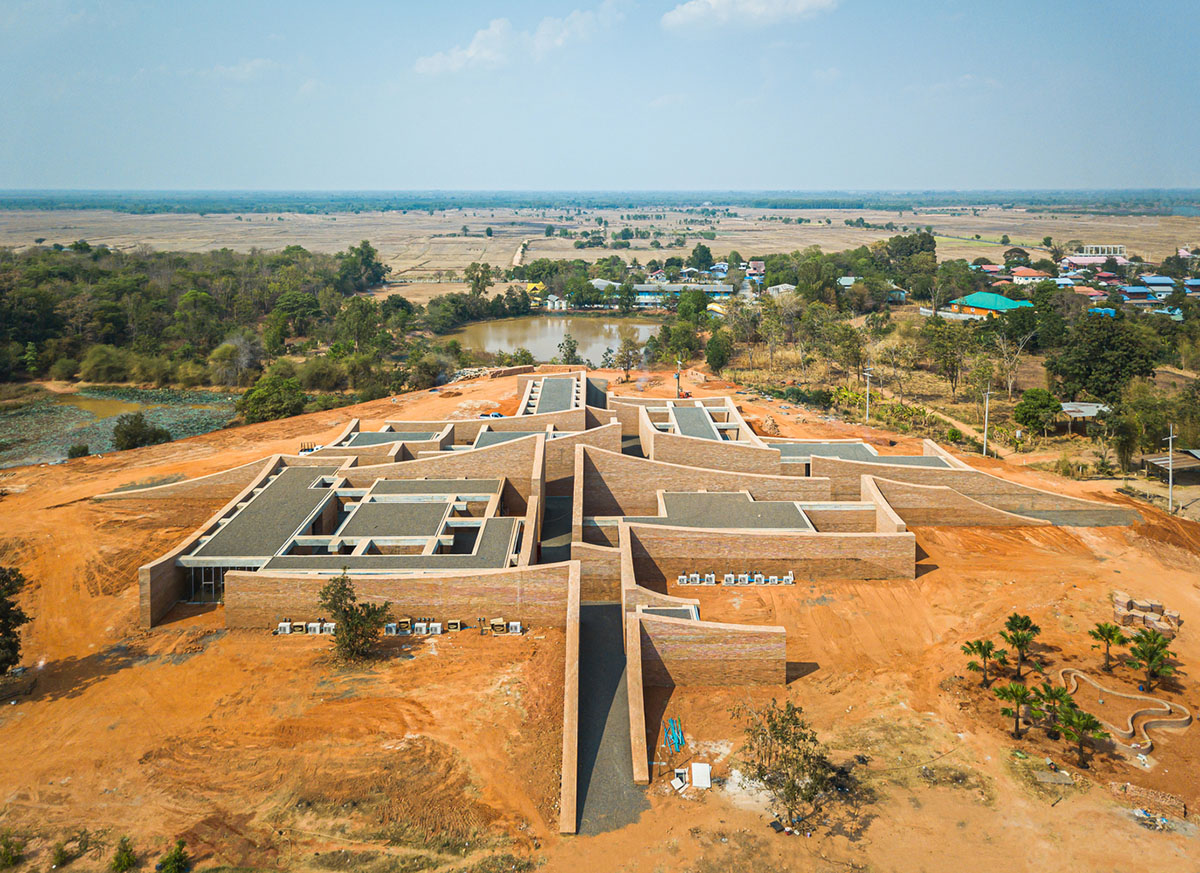 The Elephant Museum was developed as part of Elephant World, which is a project initiated by the local government to bring the two back to their homeland and to ensure the suitable living conditions for the elephants.

The museum would not only showcase objects, but the museum shall also portray the voice of the villagers and more than 200 elephants living here—of their long-established familial relationship disapproval of the cruelty of animal exploitation, and of their hope for the future. 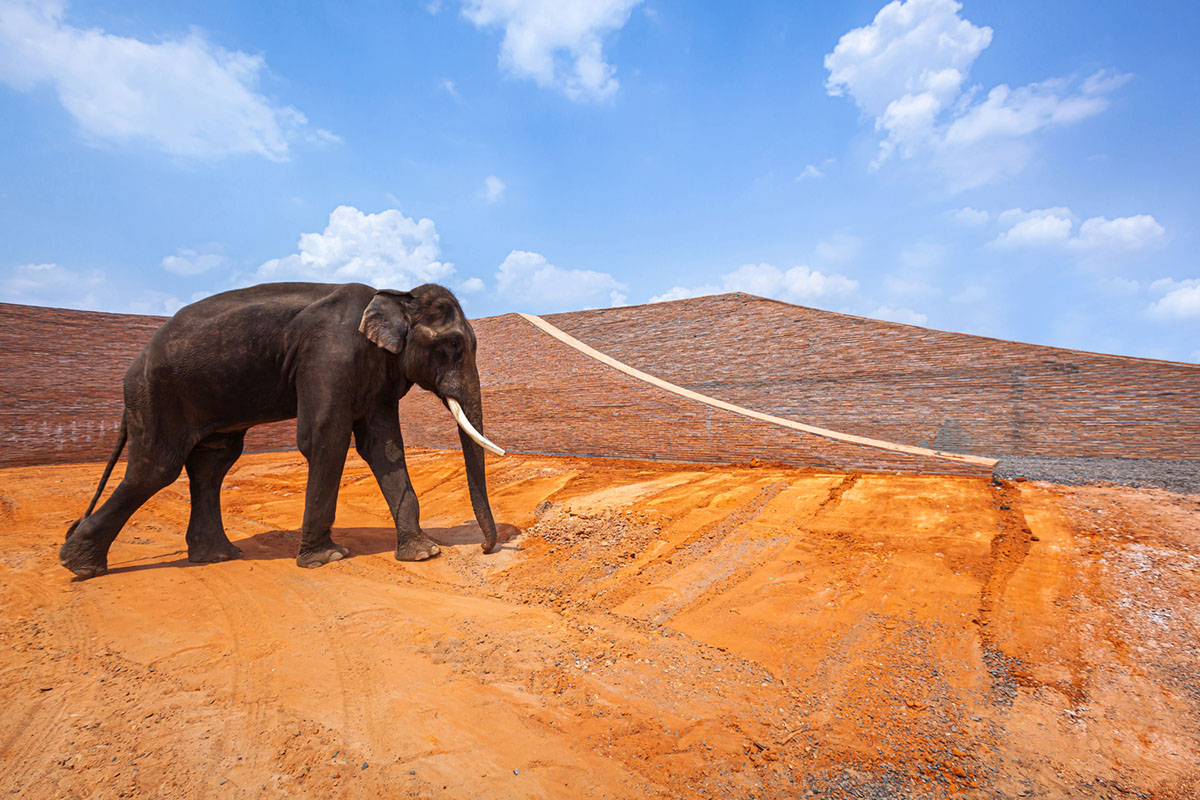 As the architects explain, "elephants are part of grand royal ceremonies and were war animals for Kings throughout the country’s ancient history."

"In addition to being respected, the relationship between elephants and Thai people are unique—being treated as family members rather than pets or labour."

"The bond is perhaps strongest in the village of the ethnic Kui in Surin province, north-eastern Thailand. For many centuries, the community has lived with elephants that their ways of life, from birth to death, can hardly be separated," said the studio. 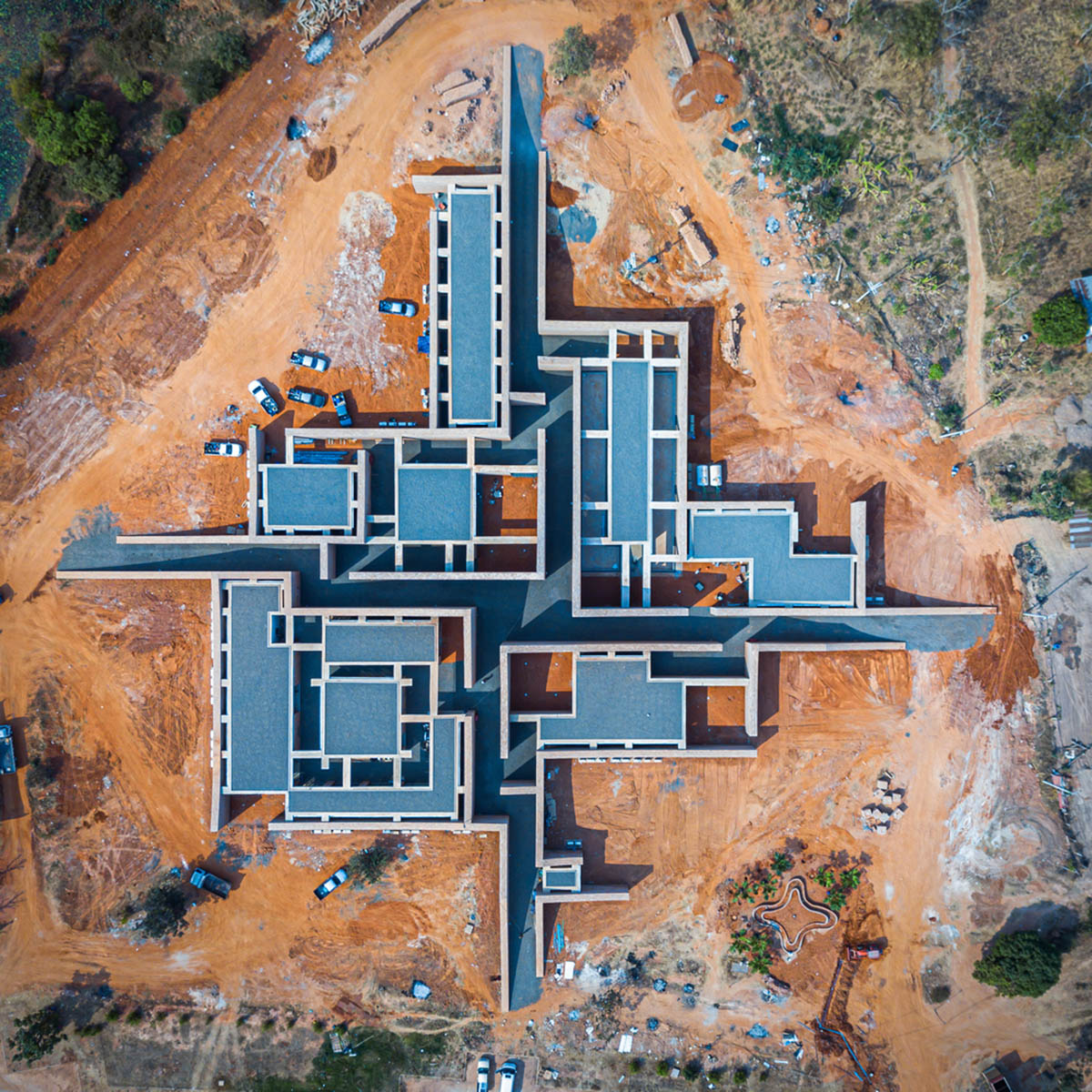 Once lush greenery, the forest of Surin was destroyed in favour of cash crops in the last half-century. The Kui and their elephants suffered extreme droughts, shortages of food and medicinal plants the forest once provided.

Deprived of sustenance, the two displaced to tourist towns begging for food or working in elephant camps, some with unsuitable living conditions. 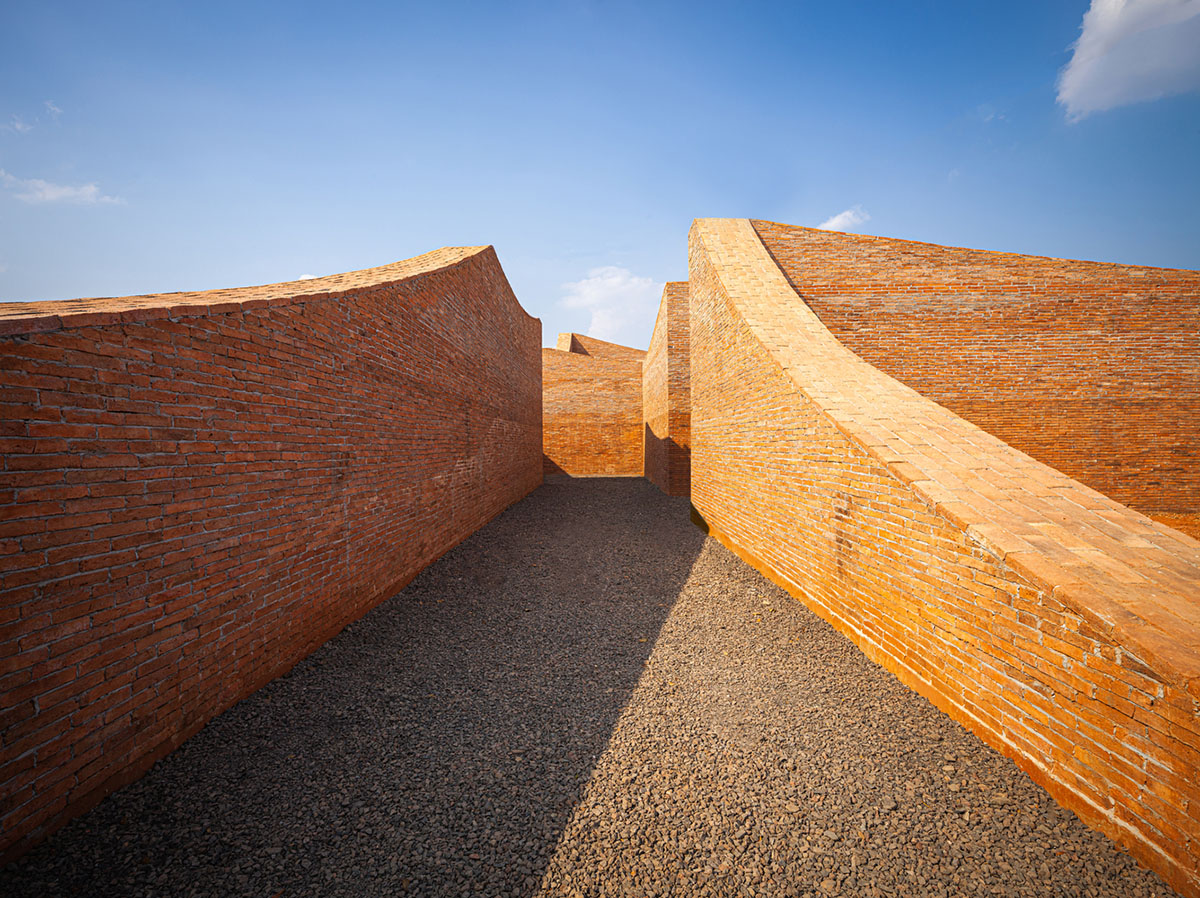 Covering a total of 5,400-square-metre area, amidst the vast treeless landscape, the architects built curved walls at varying heights sprout from the ground, seemingly opening the building up to visitors of an elephant’s size.

The walls slope and cross one another, revealing gaps that lead visitors to the inside. 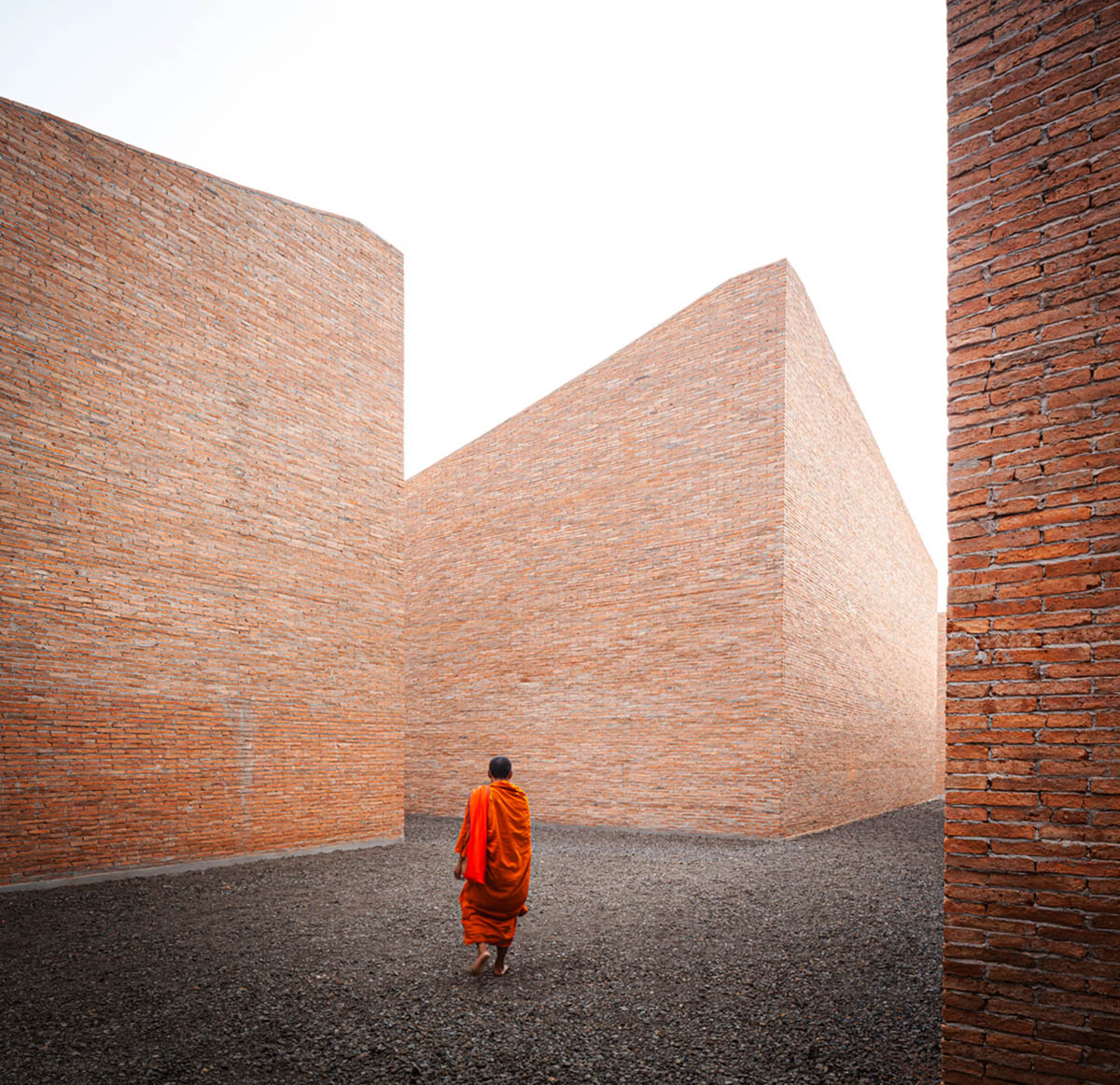 In between walls there are courtyards of different shapes and sizes open up from the four exhibition galleries. Some are filled with small pools, some with reddish earth just like the landscape outside. Different scales of outdoor paths, sheltered space, and open courtyards, recall elements of the area: from elephants, humans, their houses, the ponds they both bathe, to the dirt bath the playful elephants enjoy.

"Portraying life under the sun, sunlight is an essential element in the design," as the architects said. "Rooms and paths are brightly lit by sunlight in certain areas and dimmed in others."

"The effects change throughout the day, depending on the angle of the sun." 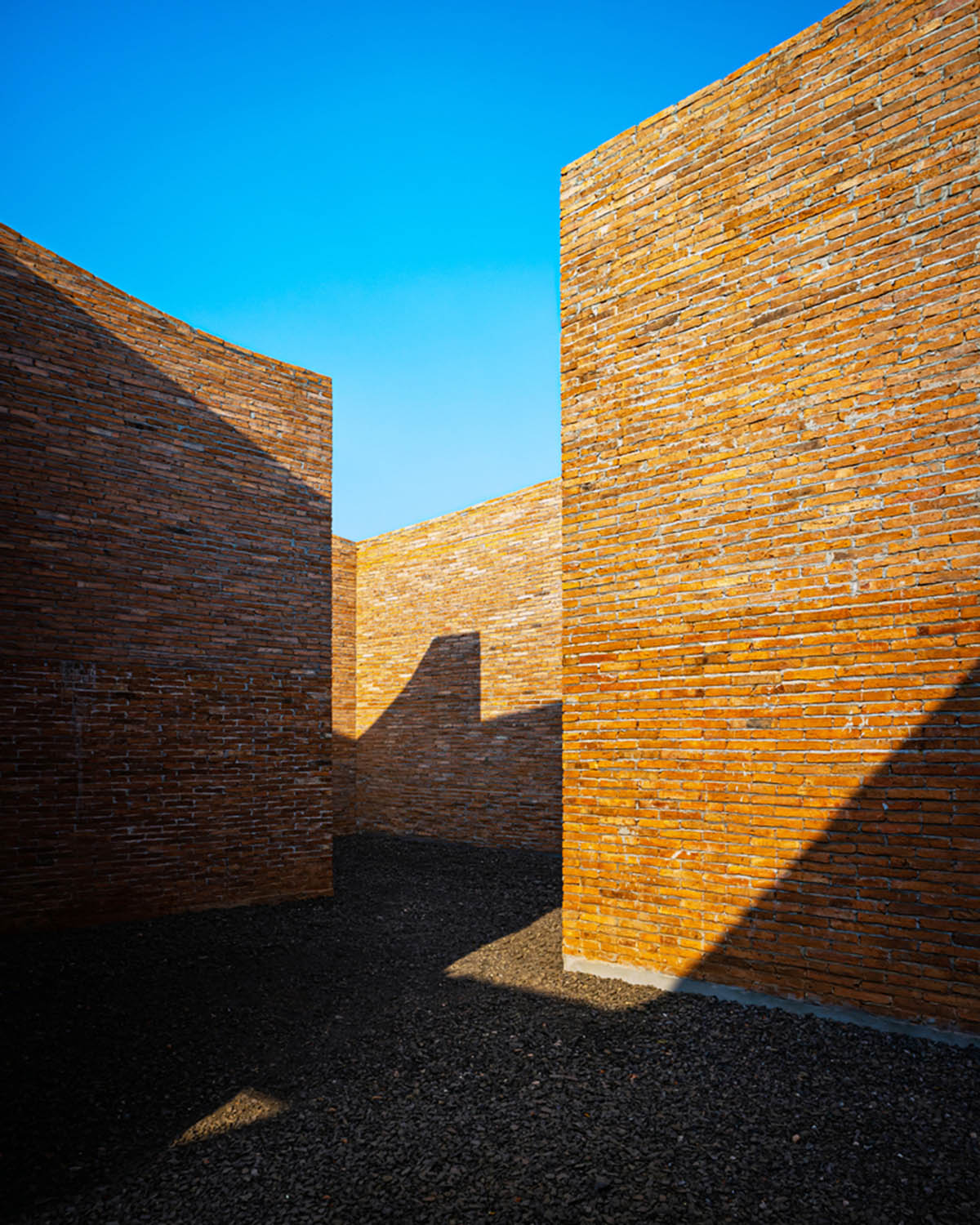 Exhibitions are arranged in the courtyards or on exterior walls. And inside the galleries, one may only find seats to rest and look out at the content displayed outside while reflecting on the coexistence between the two species. 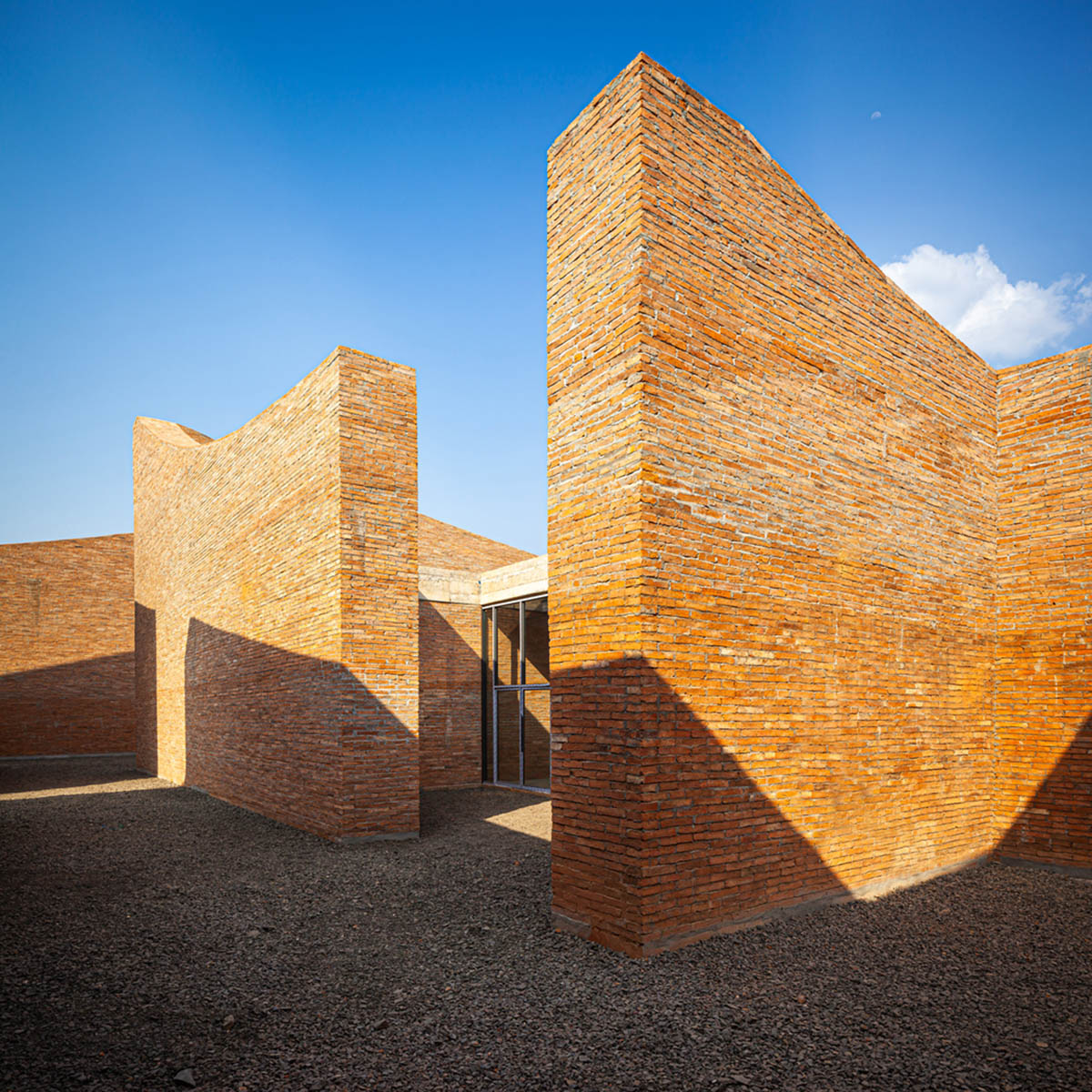 In construction, the architects used over 480,0000 fired clay bricks are made by hand from loam found in the area with the technique that has been passed down through generations. In the town where there are not many job opportunities, the construction process creates jobs and income for the locals while increasing the value of the often-overlooked local material.

After decades of struggling away from home, the museum shall empower the Kui, the elephants, and the people of Surin. Its program and the building process shall encourage them to take pride in their heritage, and restore the dignity of their beloved elephants once again. 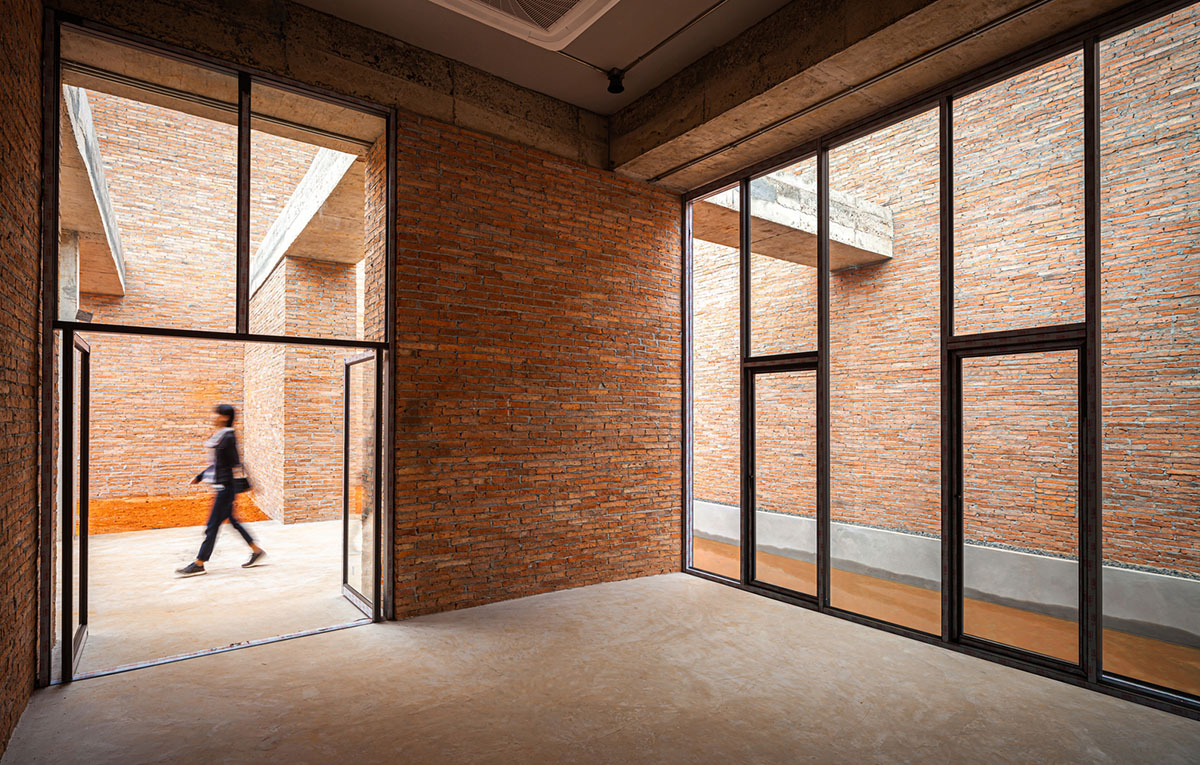 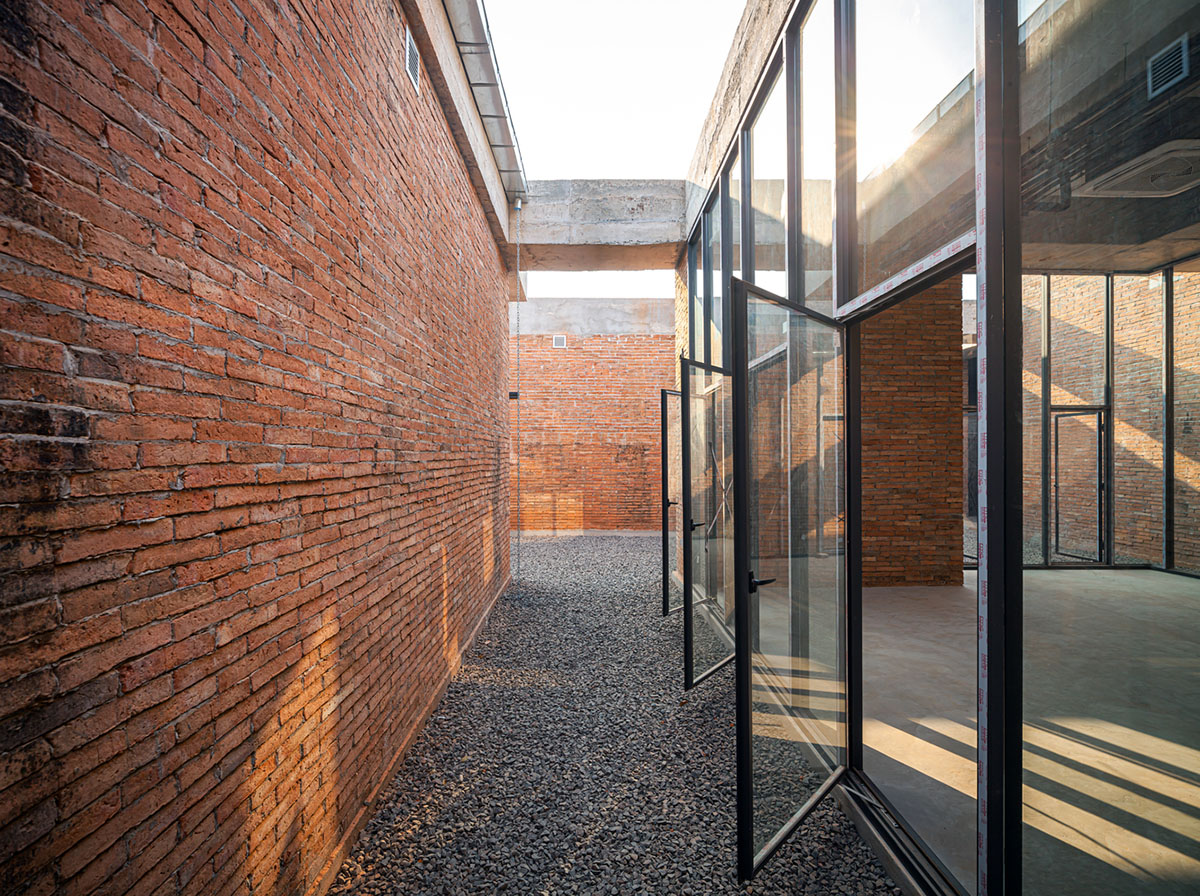 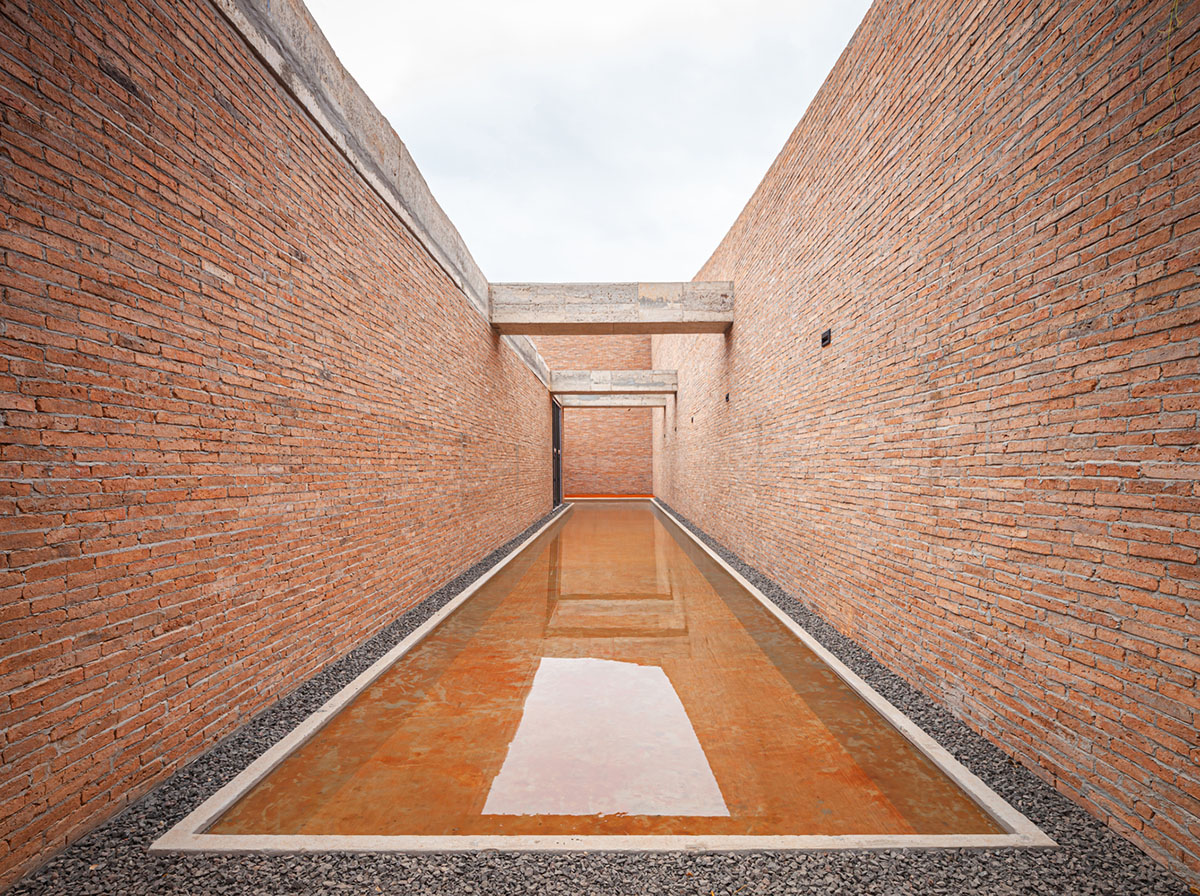 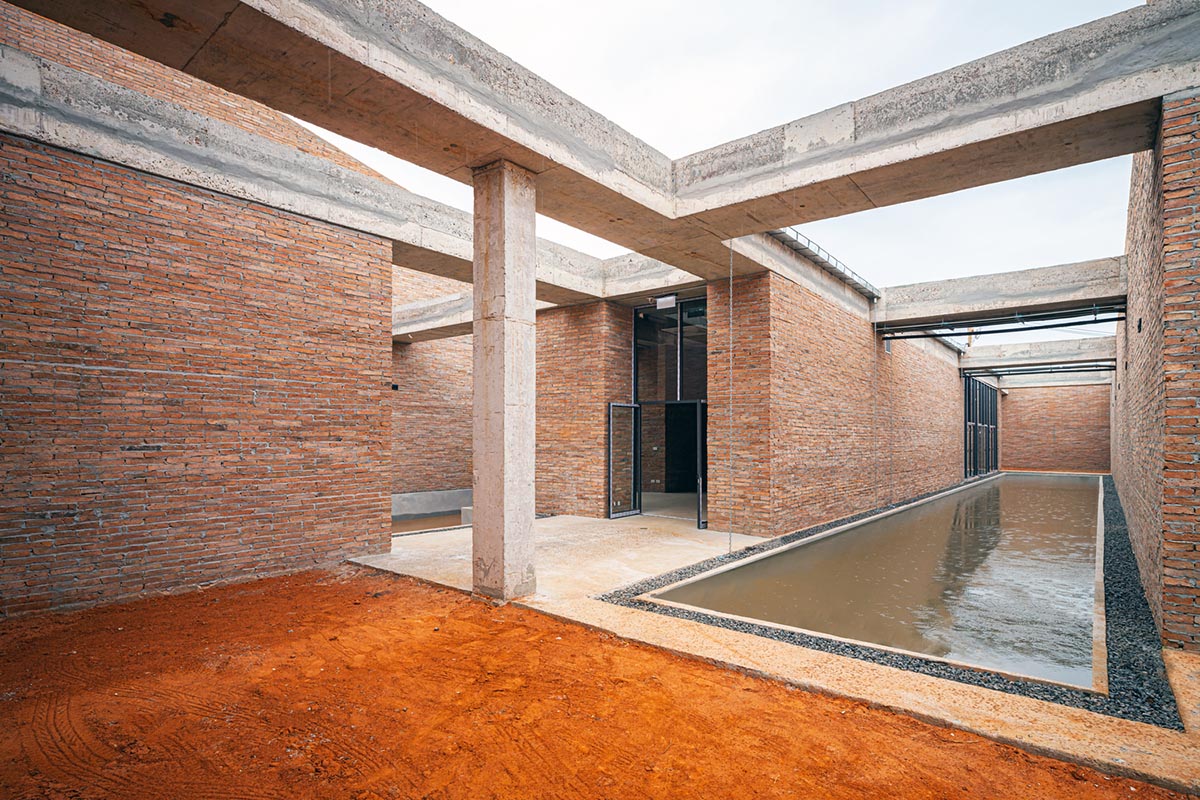 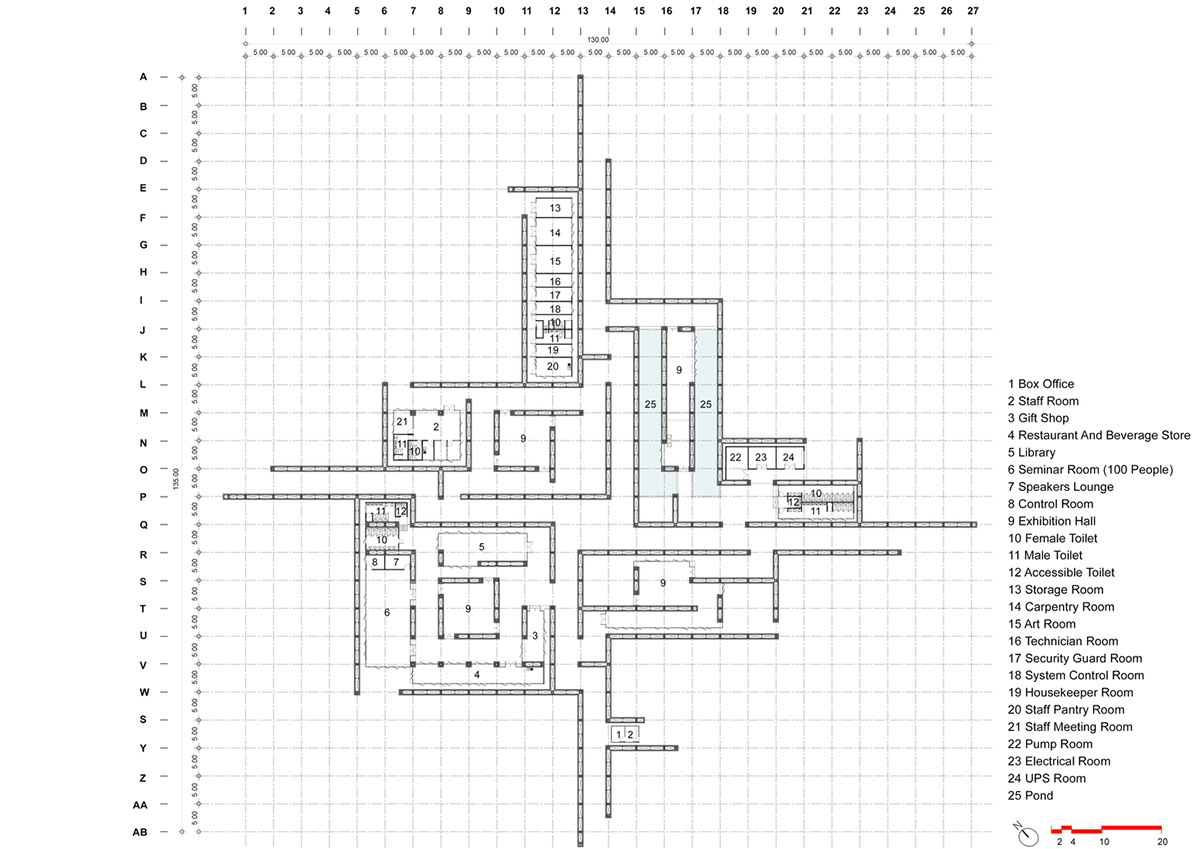