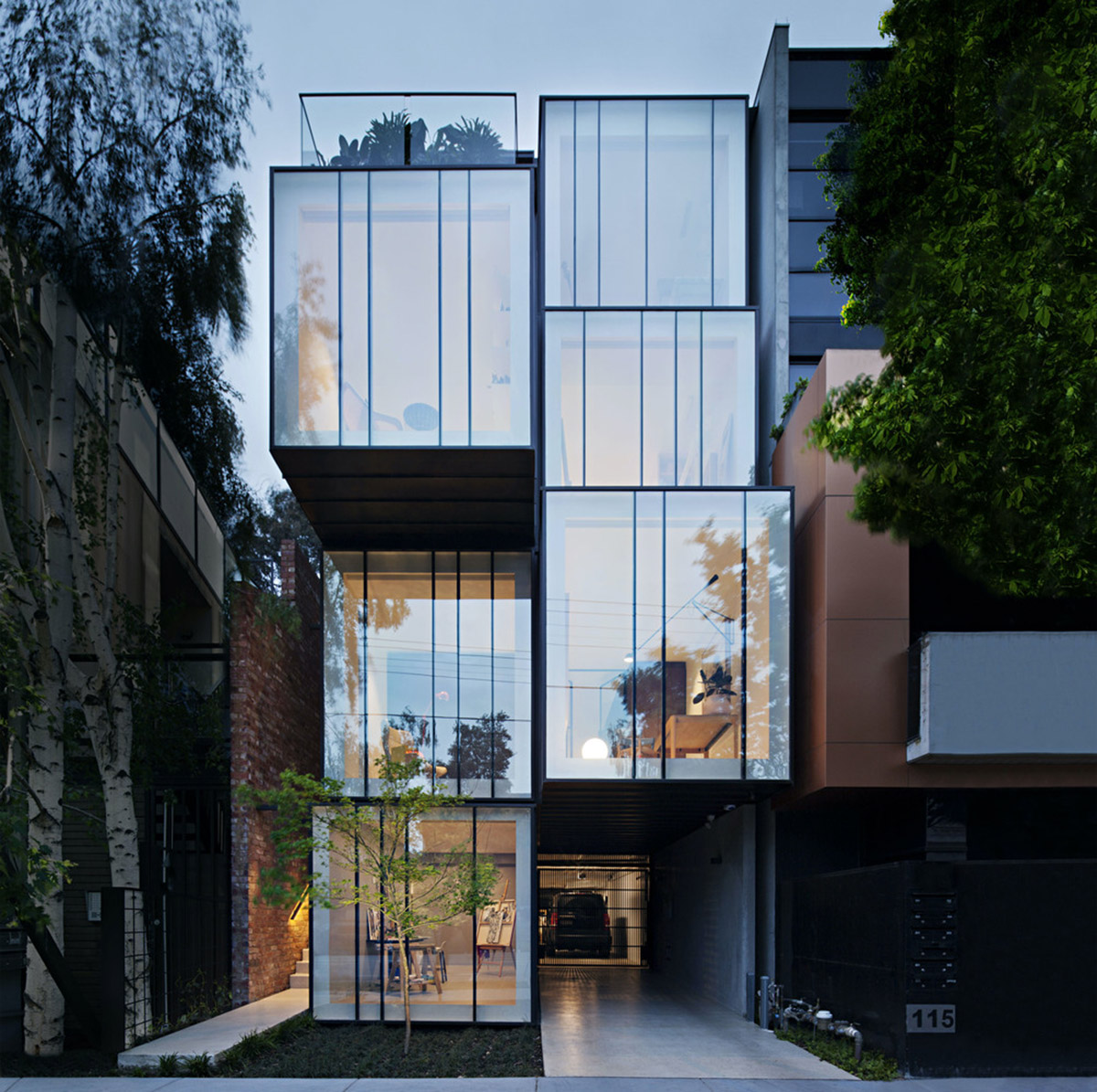 Called Wellington St Mixed Use, the two-storey building was designed as "an adaptable building model housing" adapting to the municipality's requirements for business on one or more levels.

Proposed by an open-minded client, the client wanted to renew an awkward, narrow & underutilised site in inner Melbourne. The clients are from a property industry and interior designer who live here with their two adult children & partners and a young daughter. 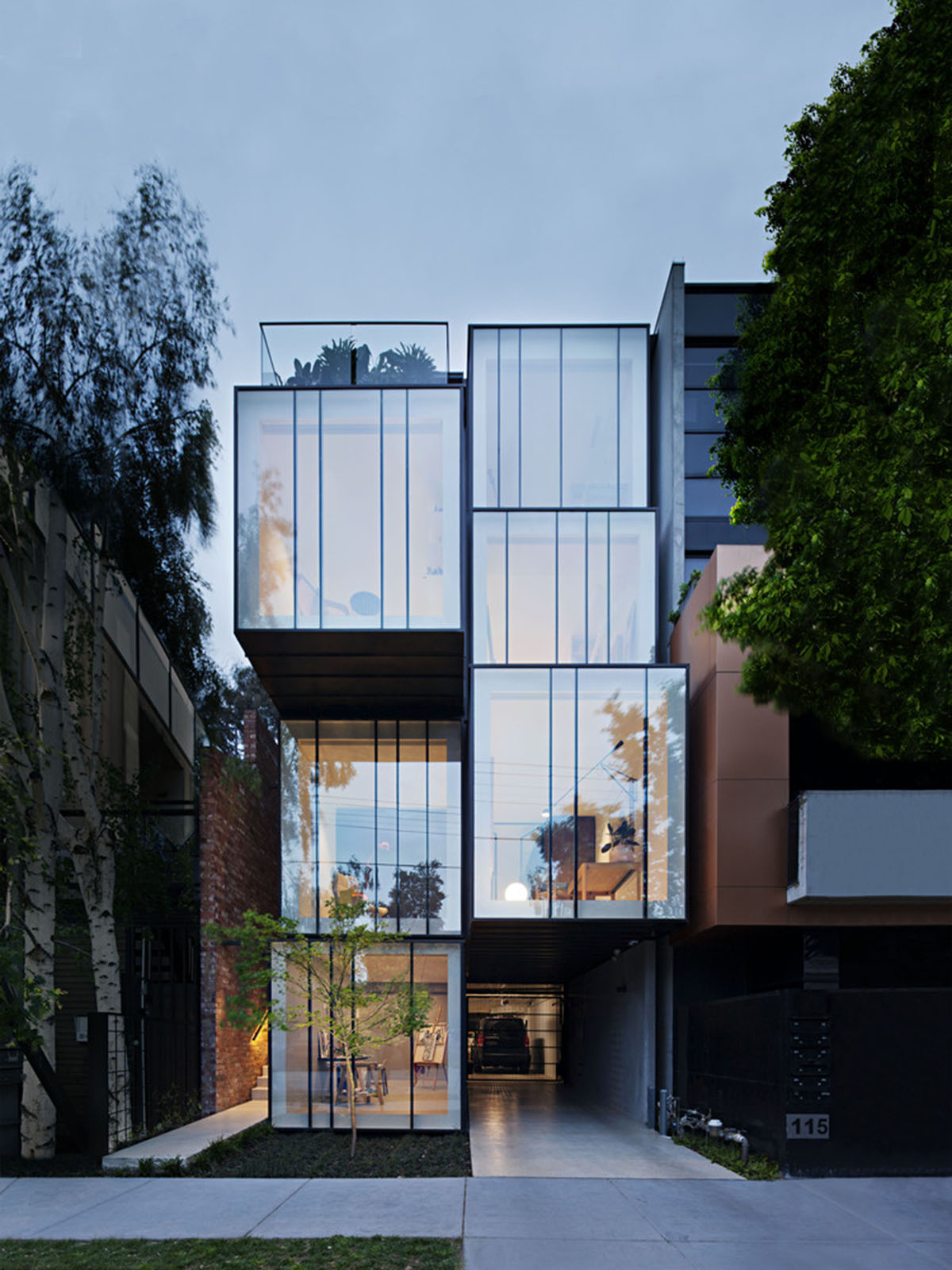 "They saw it as an opportunity to embrace inner city living &challenge the traditional ‘quarter acre block’ housing typology in Australia that they had come from to provide a flexible platform to house a multi-generational household and commercial use on the ground level," said Matt Gibson Architecture + Design describing their project. 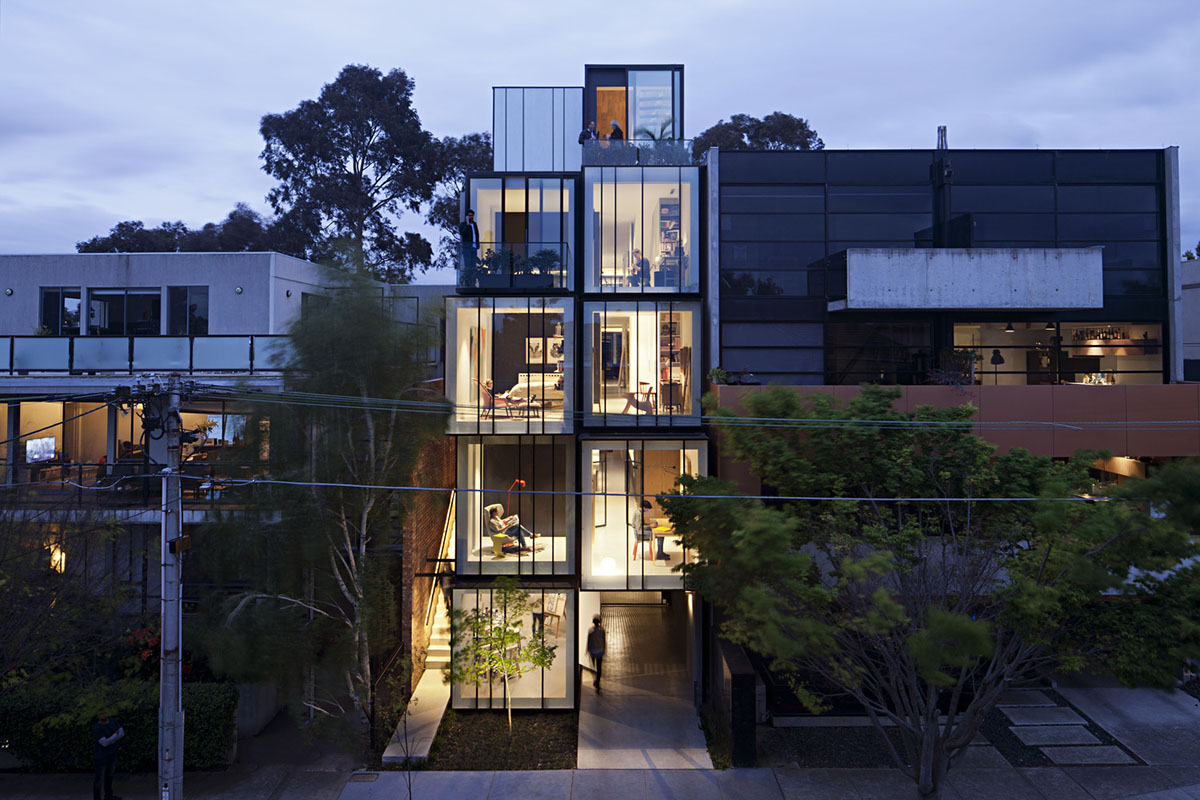 The building is located on a strip zoned as business opposite a freeway at one end and in-tact lower rise residential fabric at the other. In response to the client's brief, the architects wanted to create a new kind of vertical living that can be adapted to meet demands of this multi-generation family in the future. 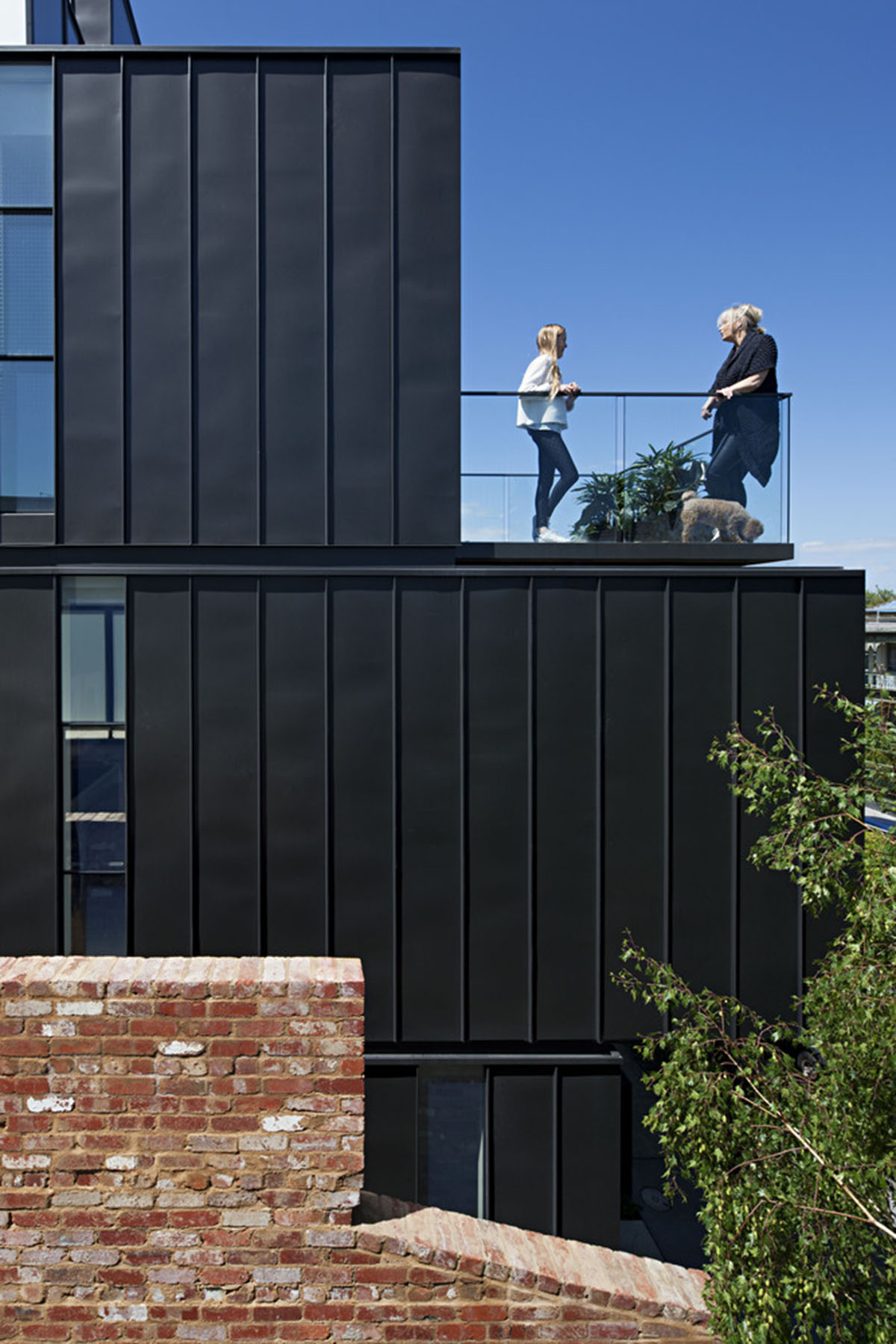 "In this client’s case, there was a very positive connotation around this which was about location, amenity & a vertical living configuration that could allow for both connection & retreat."

"Population growth in Melbourne is increasing rapidly. By 2050 Melbourne will be 8 million, doubling it’s population in just 40 years. It is a fact that Melbourne has an oversupply of smaller studio apartments (driven by the international investment market) and on the flip side a shortage of quality family housing." 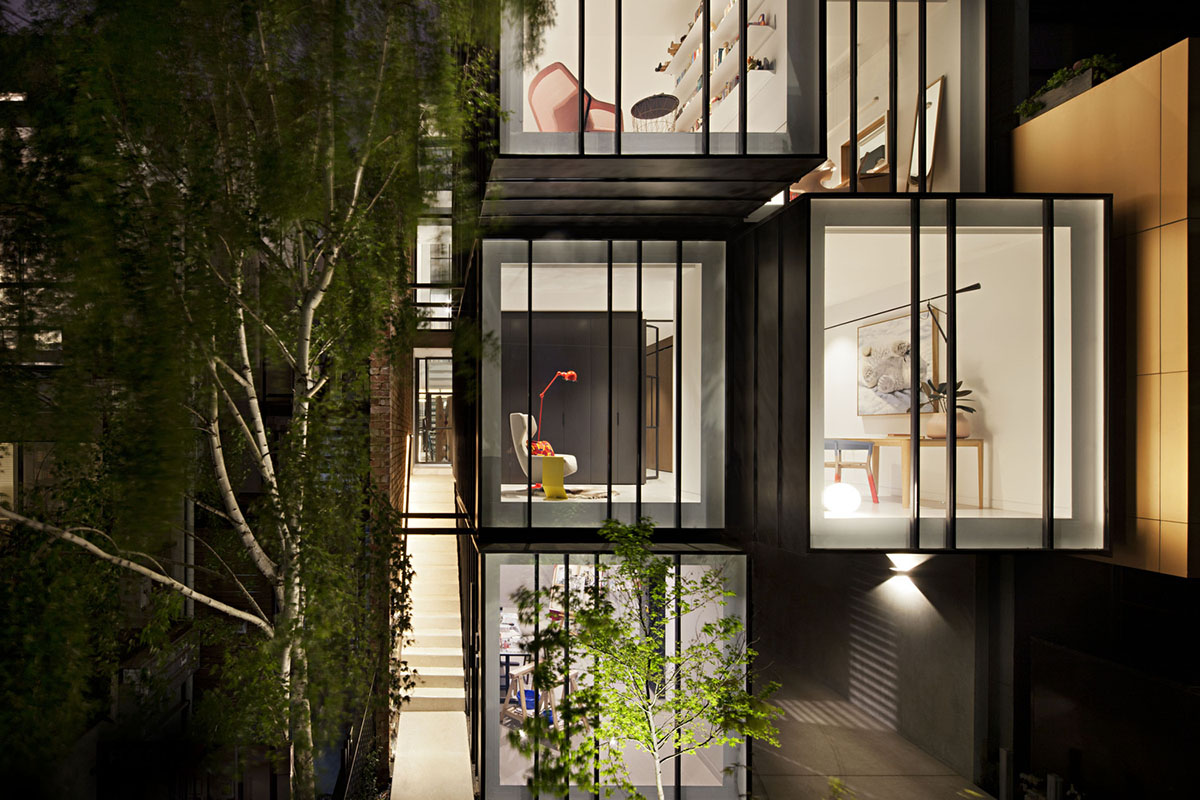 As the architects highlight, whilst apartment living is one answer to population boom, another answer looks at a more flexible use of land that densify’s across zones incorporating vertical infill living options and through utilizing multi-gen & co-living formats where resources may be shared to enable higher quality built environments and more affordable living options. 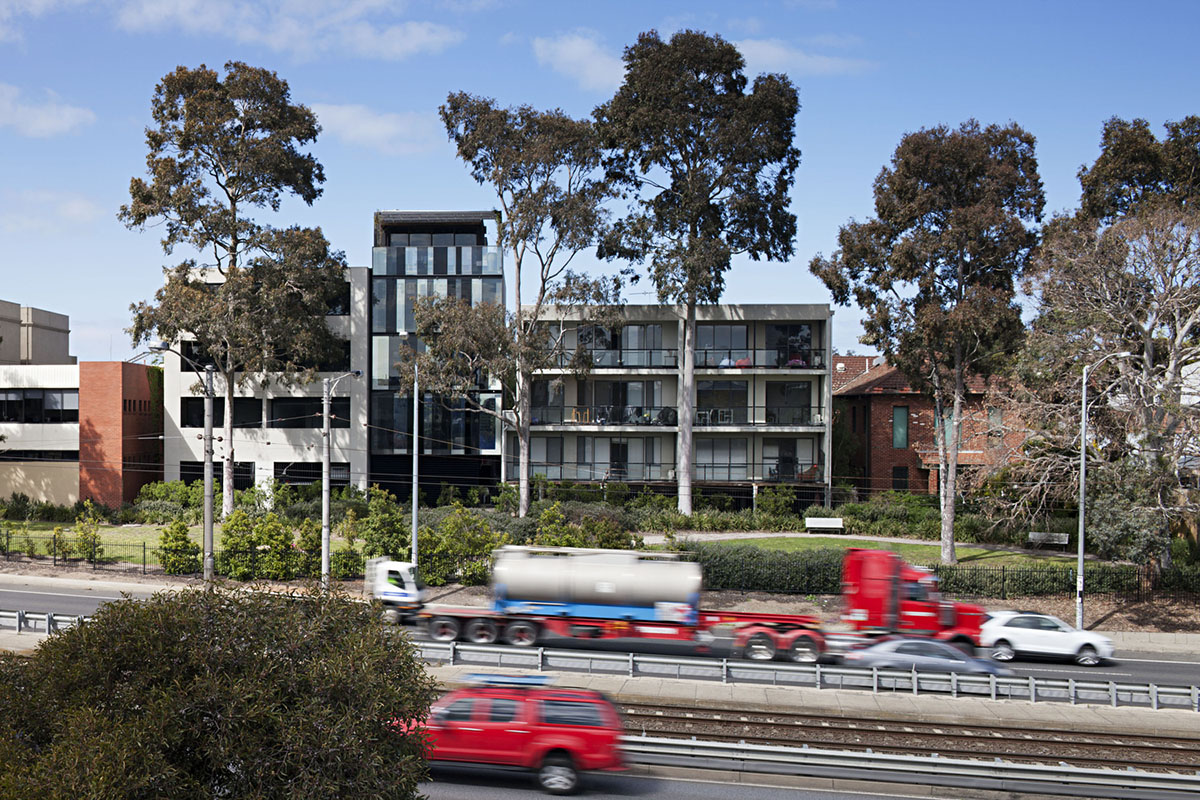 Contrasting site conditions at the southern and northern ends of the site define the built form. The southern façade facing Wellington Street divides into ten zinc clad boxes of varying setbacks that respond to the neighbours daylight conditions, internal use and the more granular nature of the residential streetscape opposite. 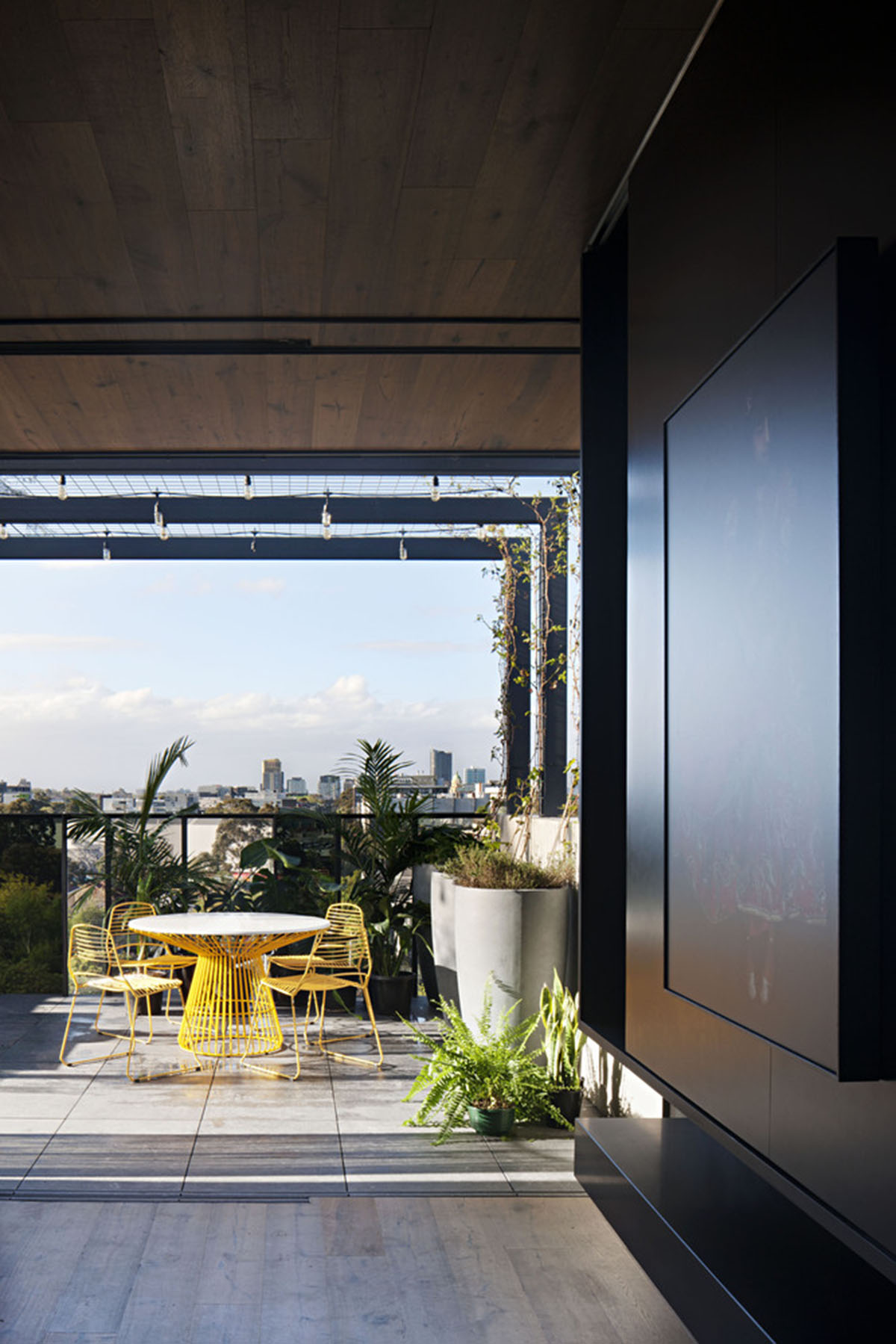 The architects preserved an existing red brick wall and trace element of the previous building and enclosed the external entry stair to the main entry door at first floor level, while the ground floor commercial studio with separate access activates the street interface and along with the other transparently glazed ‘tubes’ above blurs the edge of public and private. 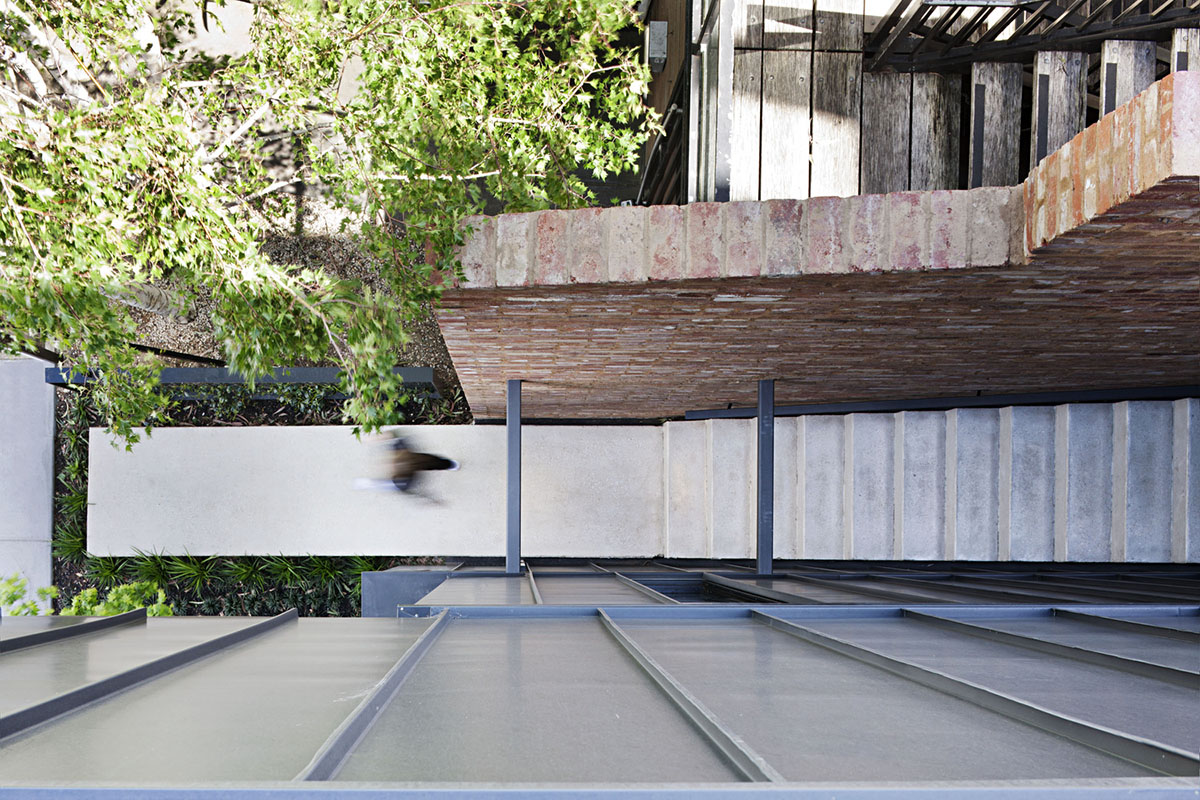 At the opposite side of the building the facade takes in northern solar exposure while catering to the acoustic requirements of a busy Freeway. The articulated curtain wall echoes the detailing at the front of the building, reflecting the surrounding foliage and urban condition. Direct ground level access to a shared communal park at the rear provides additional amenity. 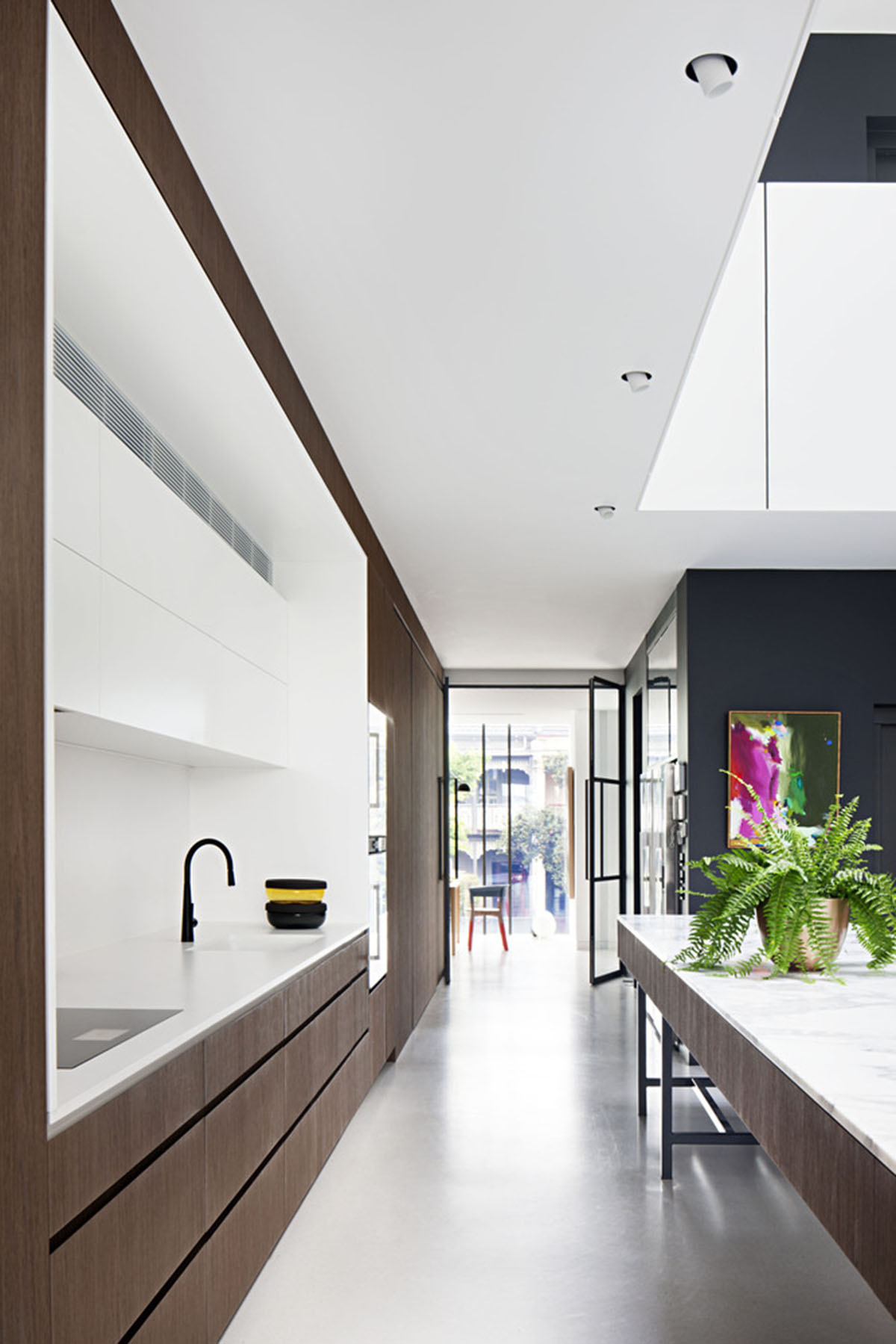 In the interior, by creating a large central atrium, it was adapted according to natural daylight, allowing light to penetrate deep into the centre of the building. Mechanical external shades top the void space providing protection from summer sun, while interstitial social zones surrounding the atrium facilitate informal communication between the levels.

The ground floor level was designed for commercial use. Above this, internally the program is configured around 3 clear zones – Communal (Living level), Personal (Bedroom levels) and Retreat (access to views and private open space). 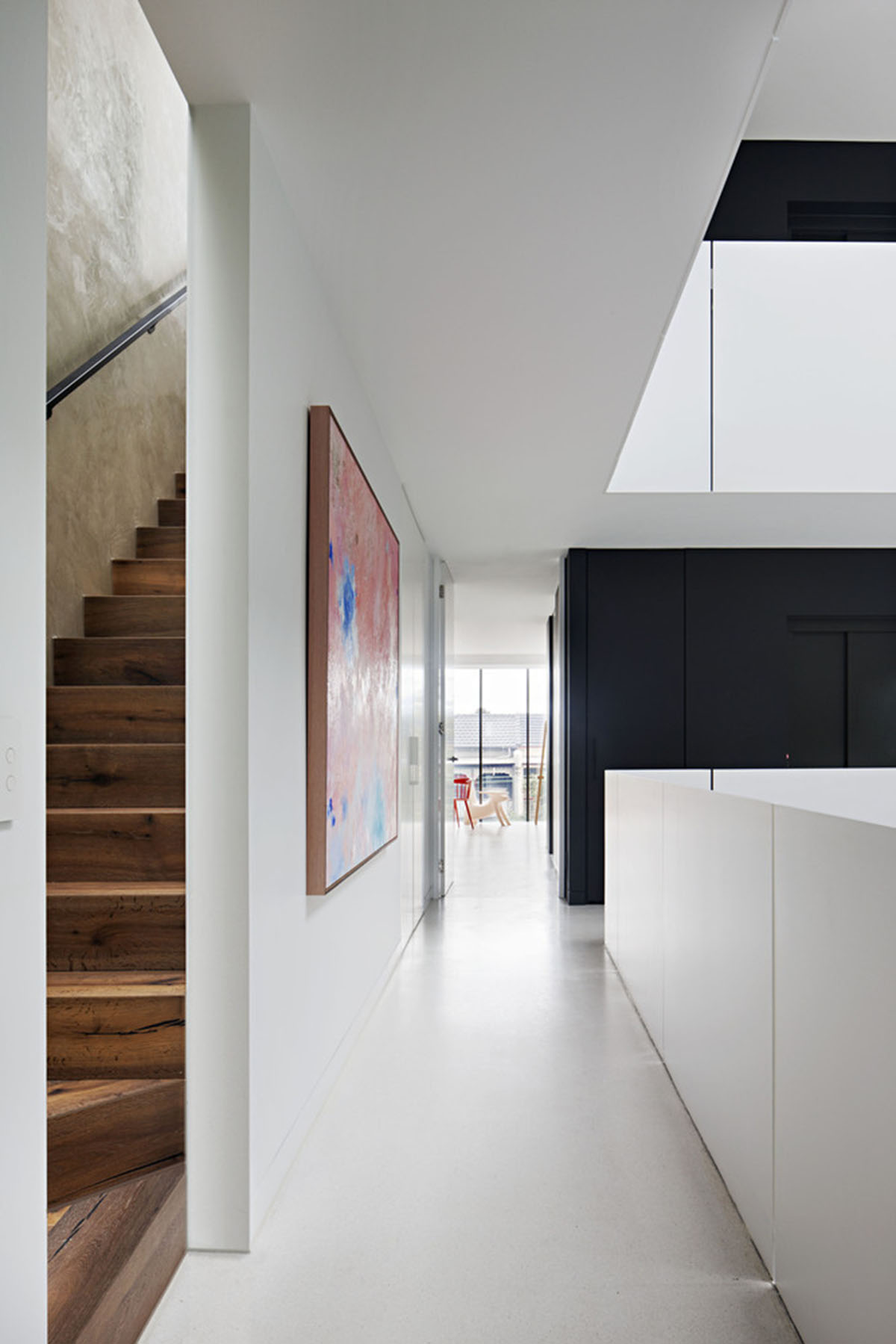 Living and sleeping spaces at the northern and southern ends occupy the full building width. Each bedroom features its own bathroom and breakout space and in many ways feel like individual self contained studios. Ensuite services are stacked, taking a multi-residential approach with a view to a possible future use.

The spaces are defined by apertures which overview the constantly changing views of the city and the surrounding kinetic urban landscape of the freeway. Dappled sunlight filters through the large eucalypt trees to the north while neighbouring heritage buildings and roofscapes are framed to the south. 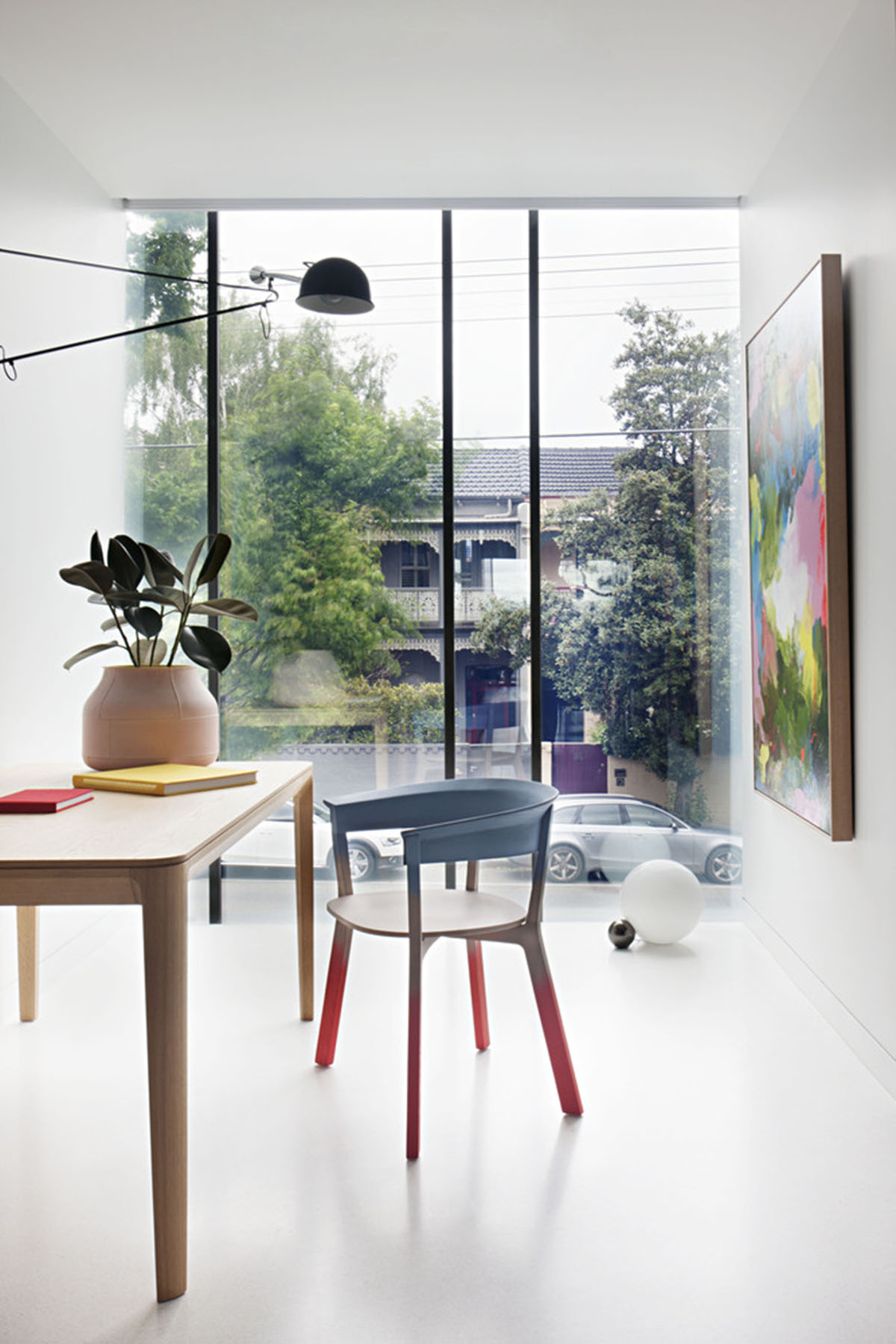 "Wellington St Mixed Use falls outside of traditional classifications. Located within a mixed use zone and deliberately ambiguous in its typology it presents as a hybrid model perhaps more readily found in somewhere like Japan where uses and zones are commonly mixed and stratified," added the architects. "Similar in floor area to the terrace houses across the road but utilising only a fraction of the land mass this building embraces a vertical (infill) living model with a program pre-ordained for future change - offering flexibility to convert to 2 or 3 residences, a commercial office space, boutique retail or any mix of the above."

"This project puts forward a case that flexible and alternative living models are on the rise & will have an increasingly important role to play in filling the fissures of Australian cities," they added. 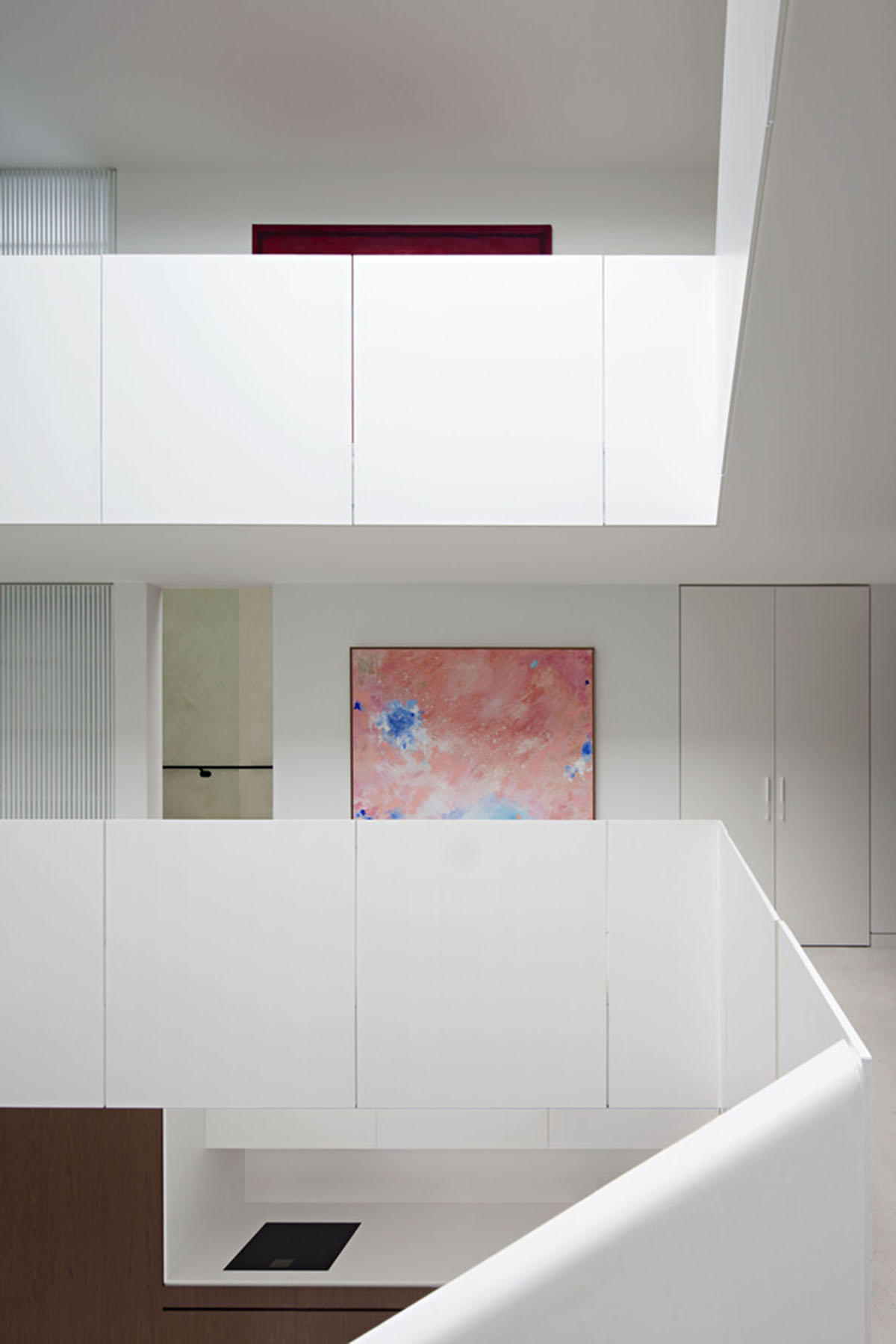 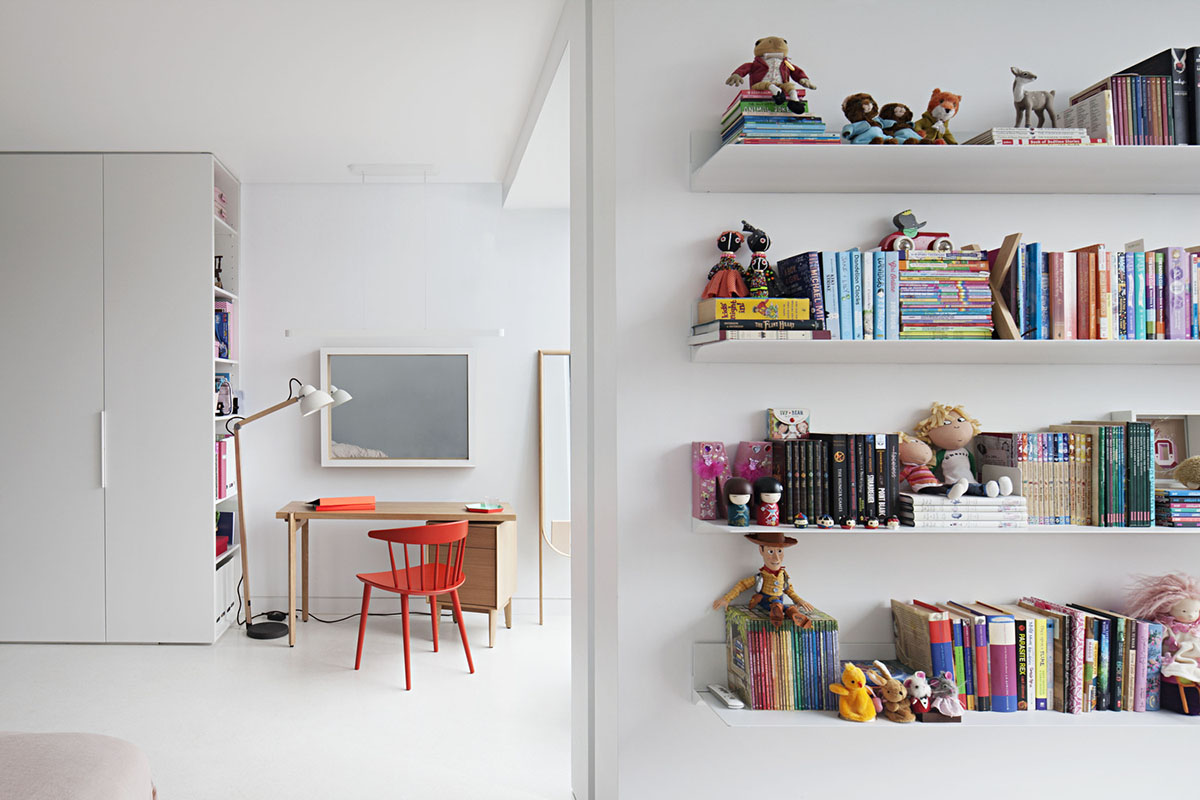 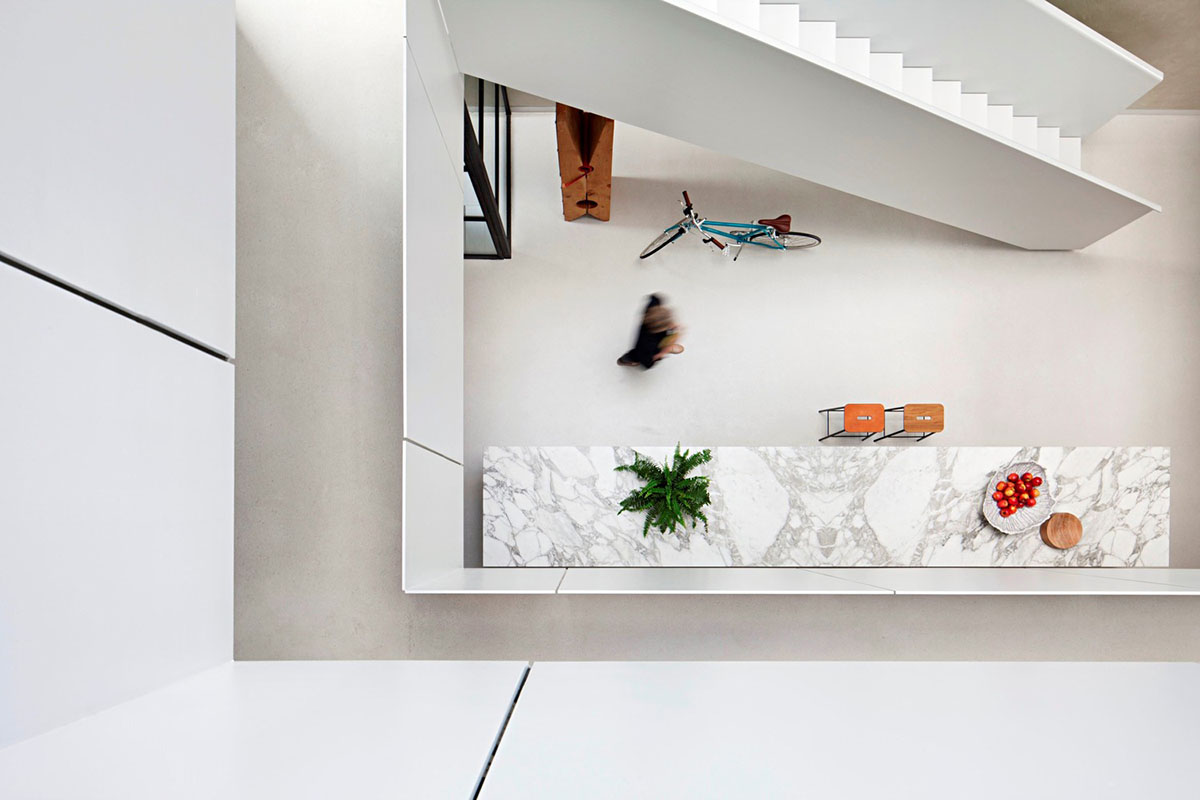 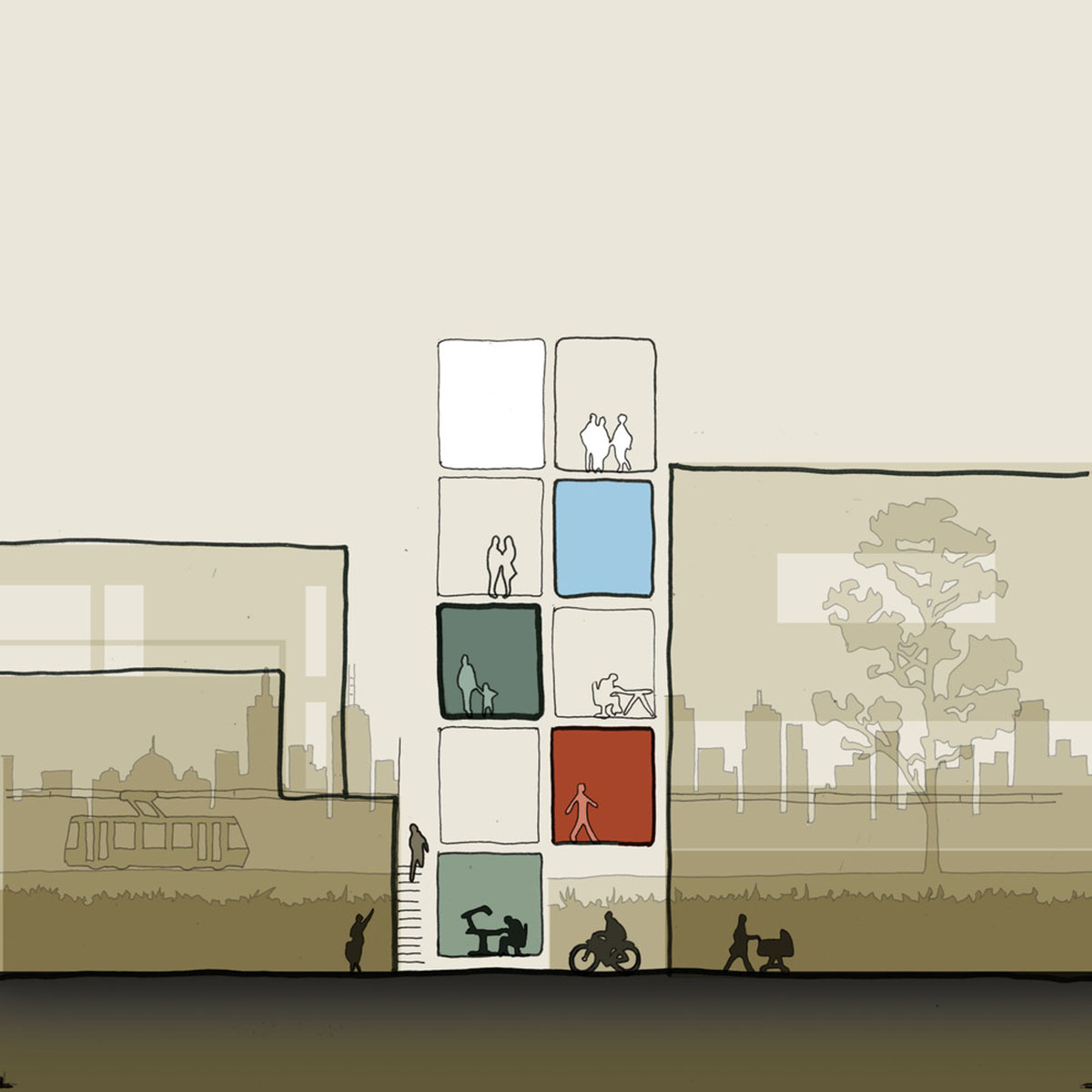 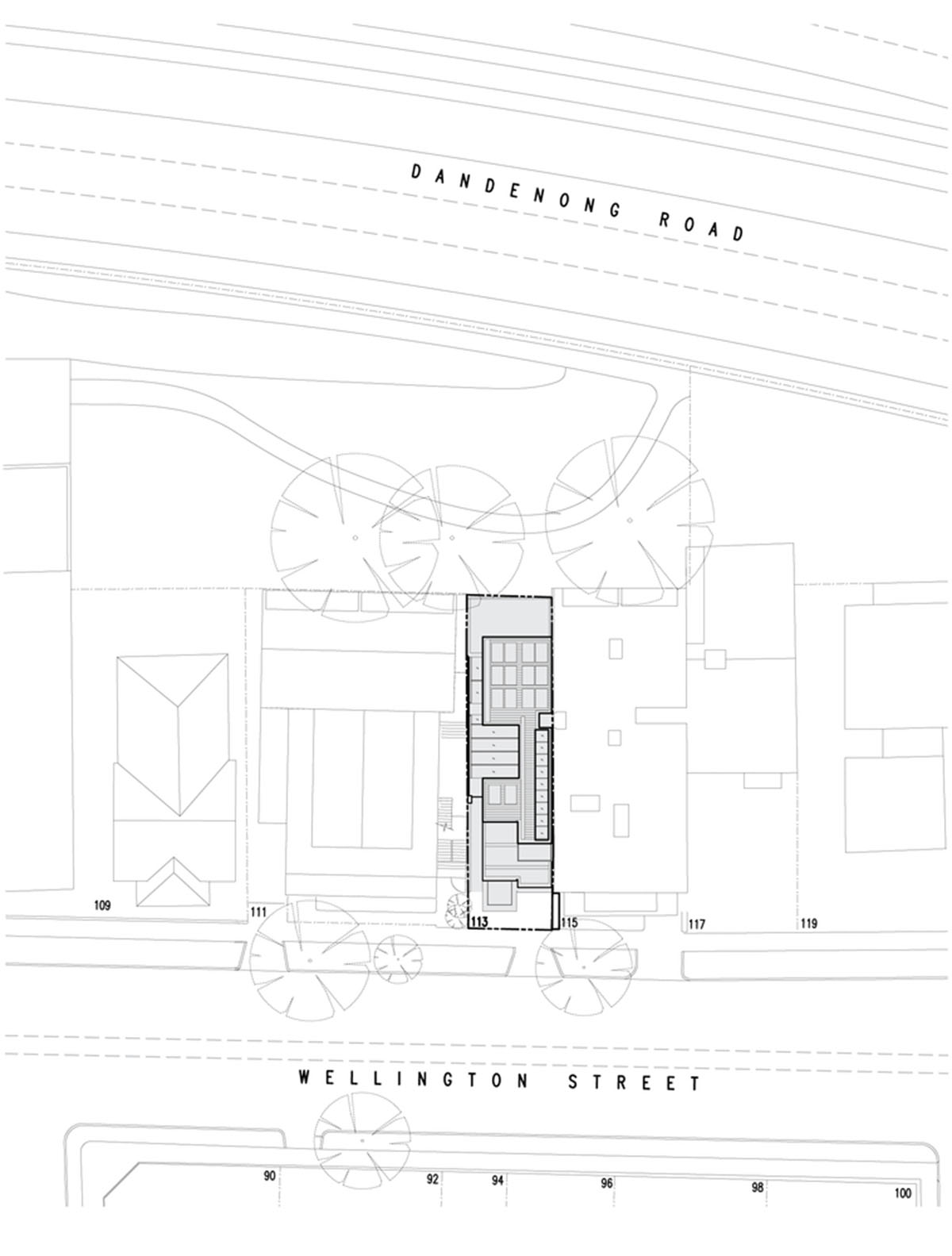 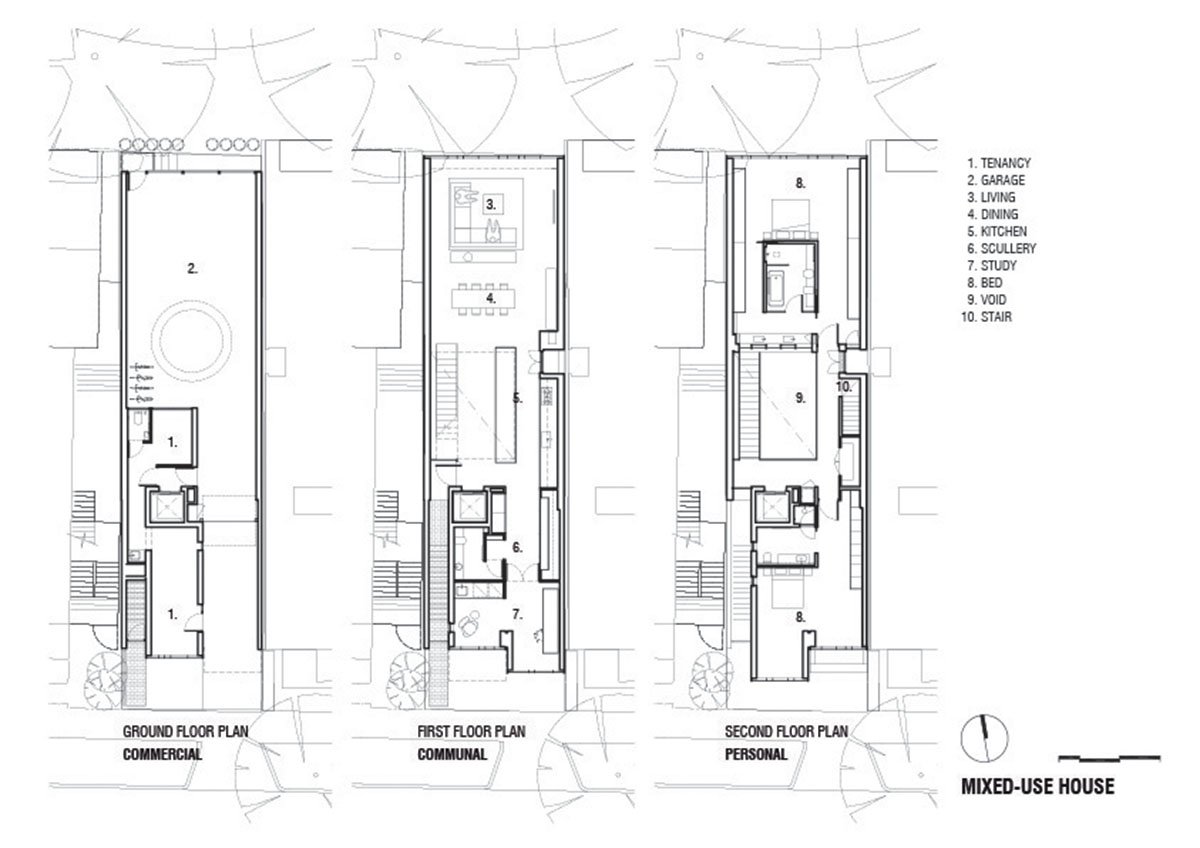 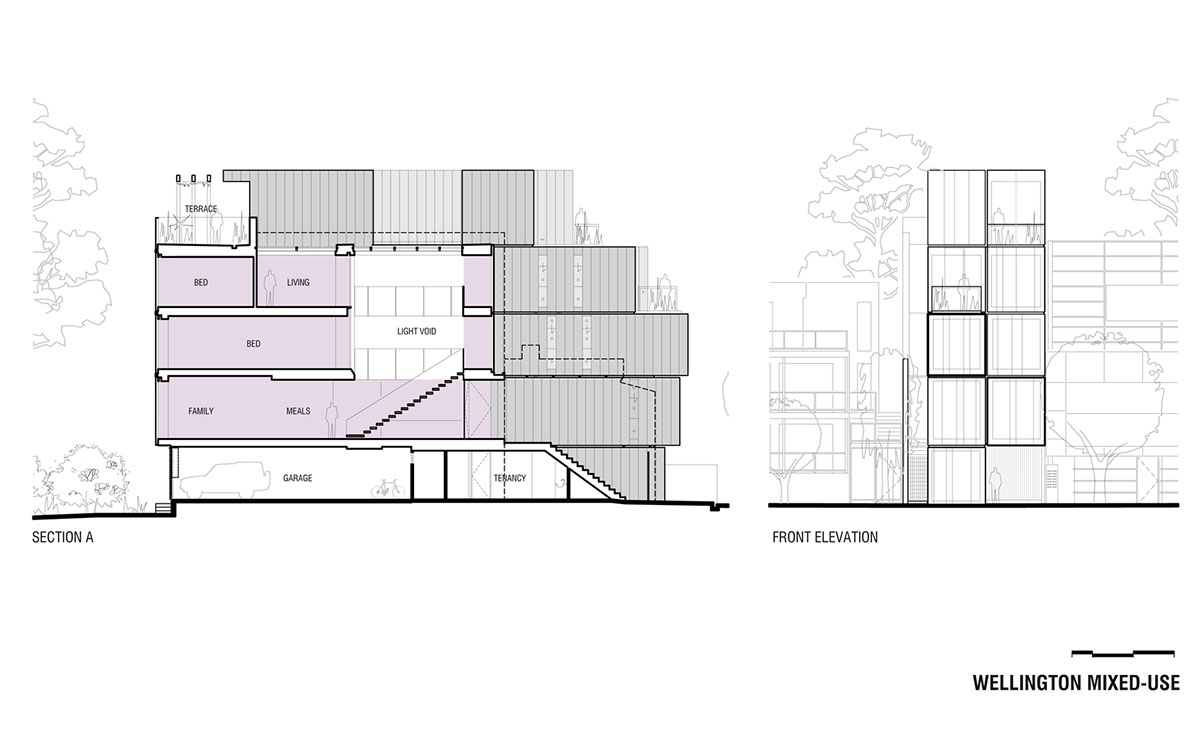 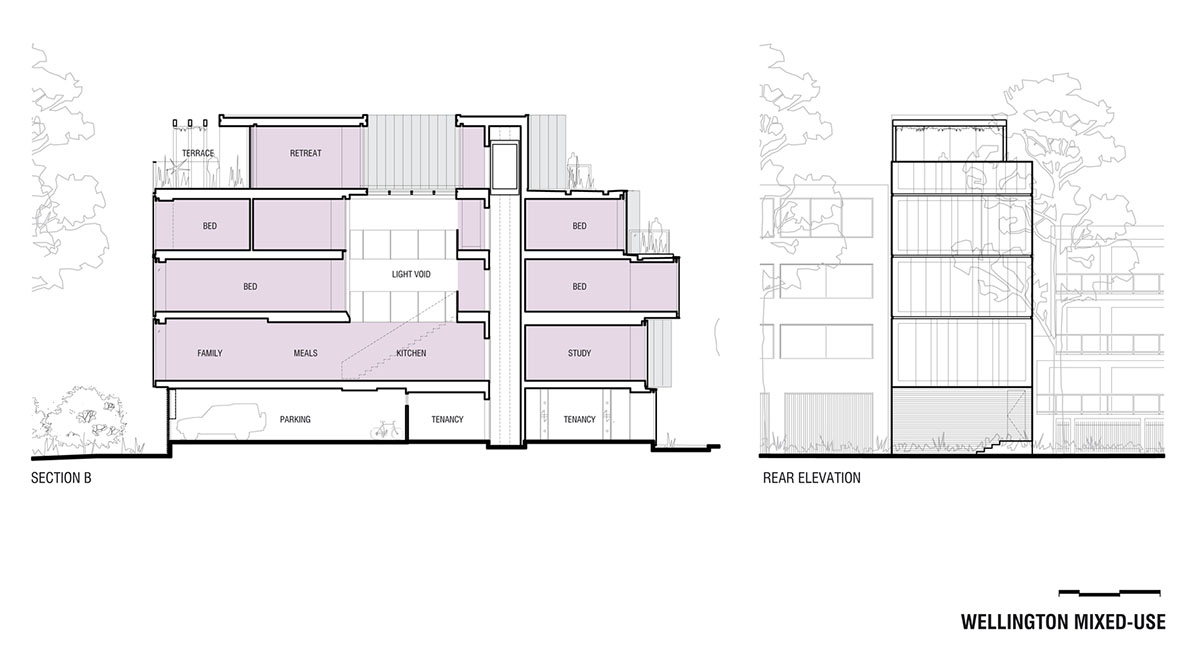