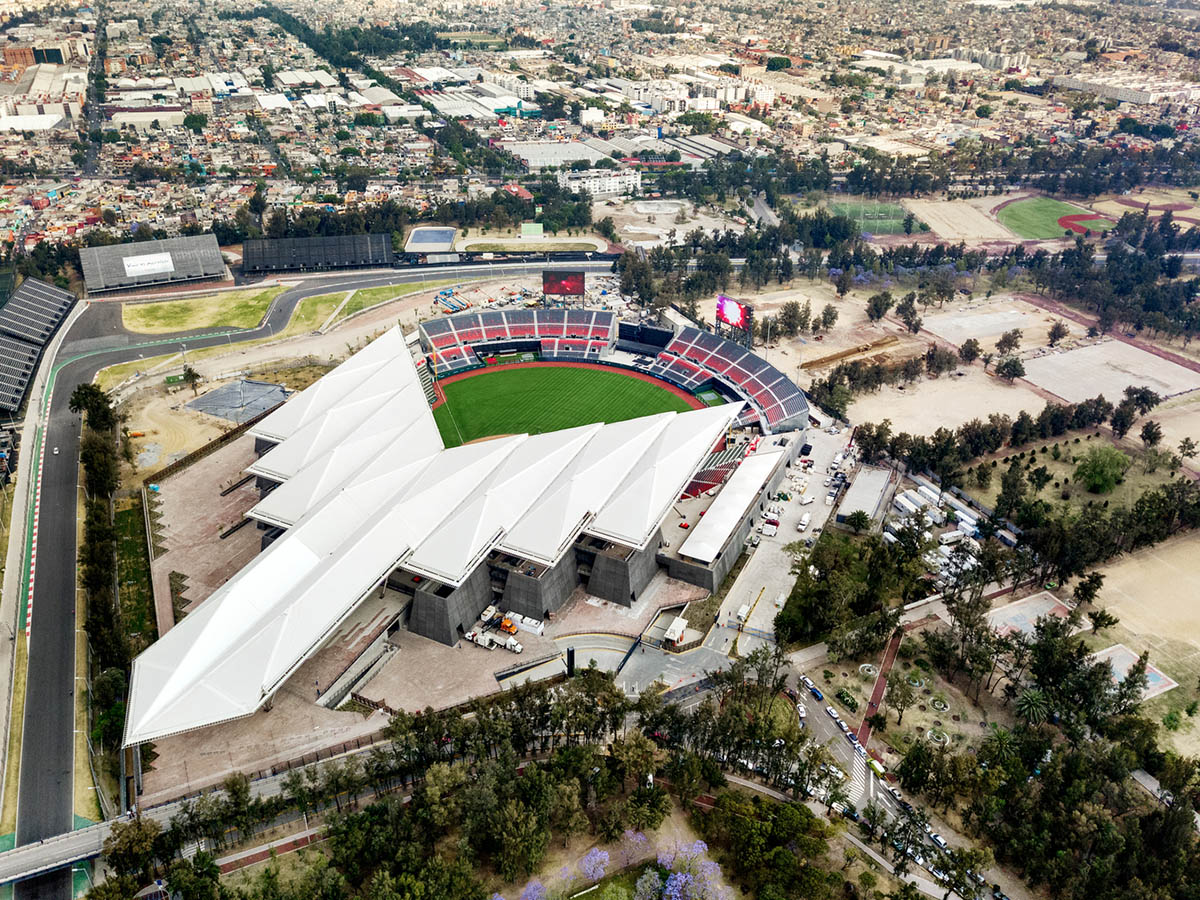 Designed by Francisco Gonzalez-Pulido, Chief Designer of FGP Atelier, the stadium, named Diablos Rojos Baseball Stadium, the giant structure was designed as the premier baseball stadium. It will provide a new home for Los Diablos Rojos del Mexico, the leading baseball team of Mexico which won 16 championships and have more than 70 years of history. 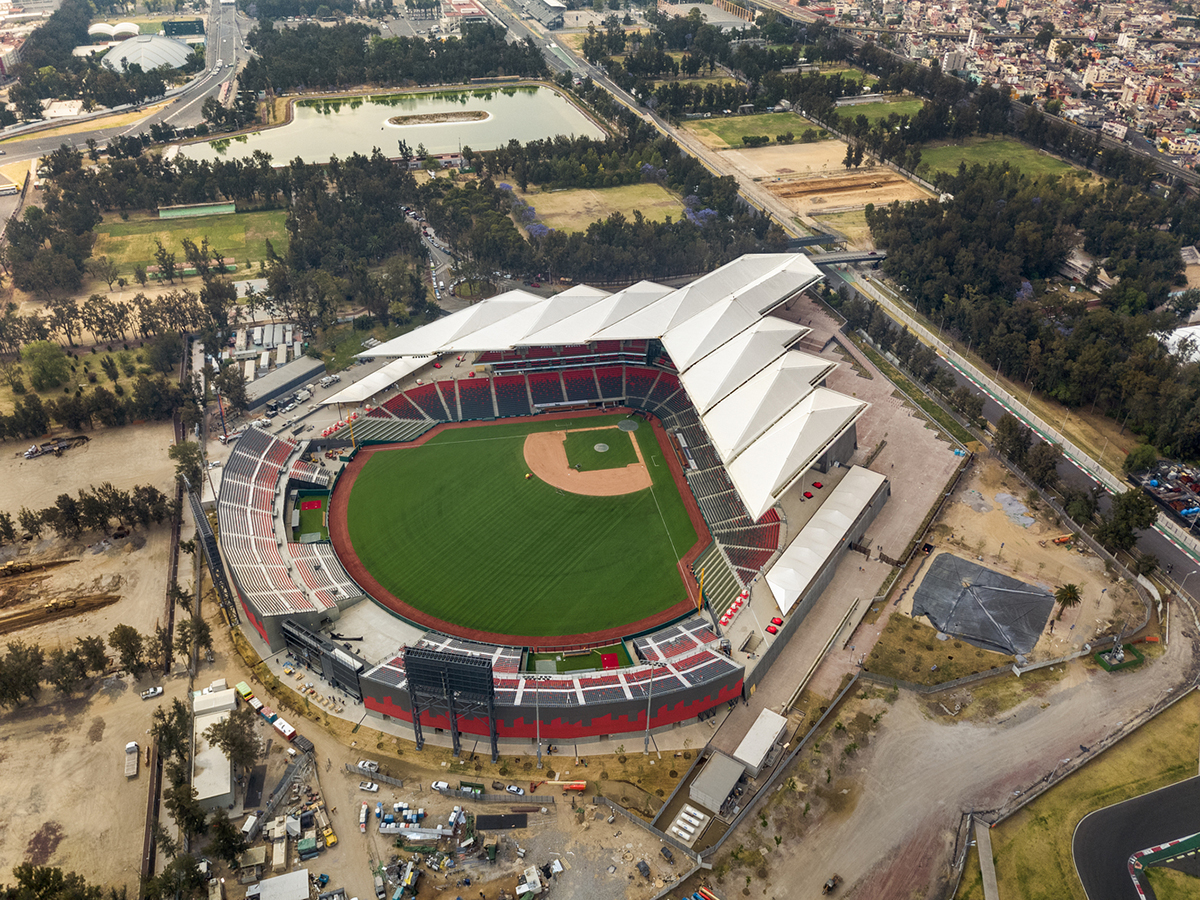 Francisco Gonzalez Pulido closely worked with with team owner Alfredo Harp Helú on the project and it takes cues the form of Diablos’ trident, which dramatically creates a contrast for a predictable roof geometry that has historically defined baseball stadiums around the world. 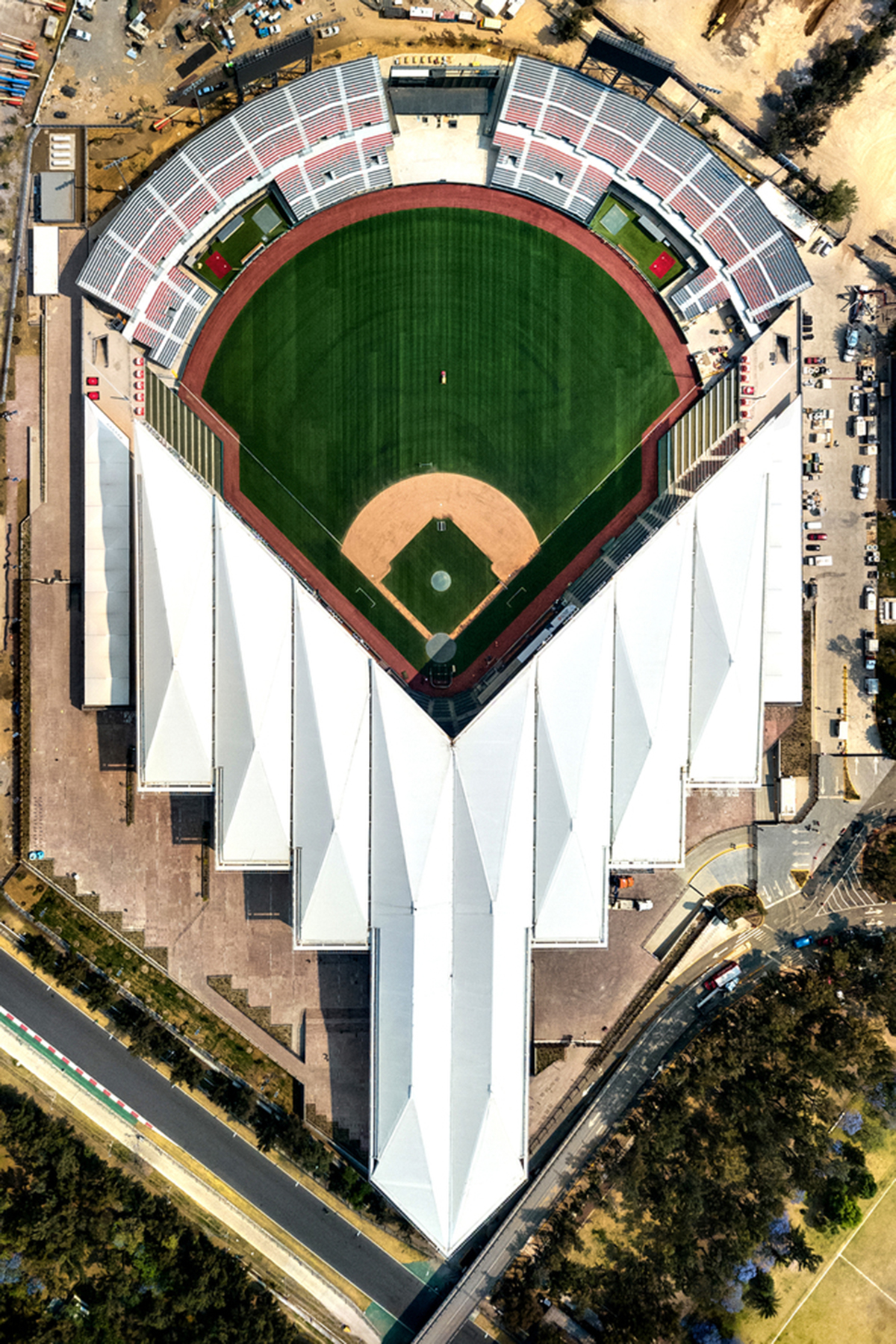 Located within the sports complex of Magdalena Mixhuca, the new stadium, covering 70,000-square-metre area, includes 11,500 covered seats and 8,500 additional seats in the outfield.

The project was designed to reflect Mexico's culture and history in a symbolic way, but new embodiment. The Diablos Rojos Stadium was aimed to integrate with the surrounding community while simultaneously serving as the home base for Red Devils baseball team. 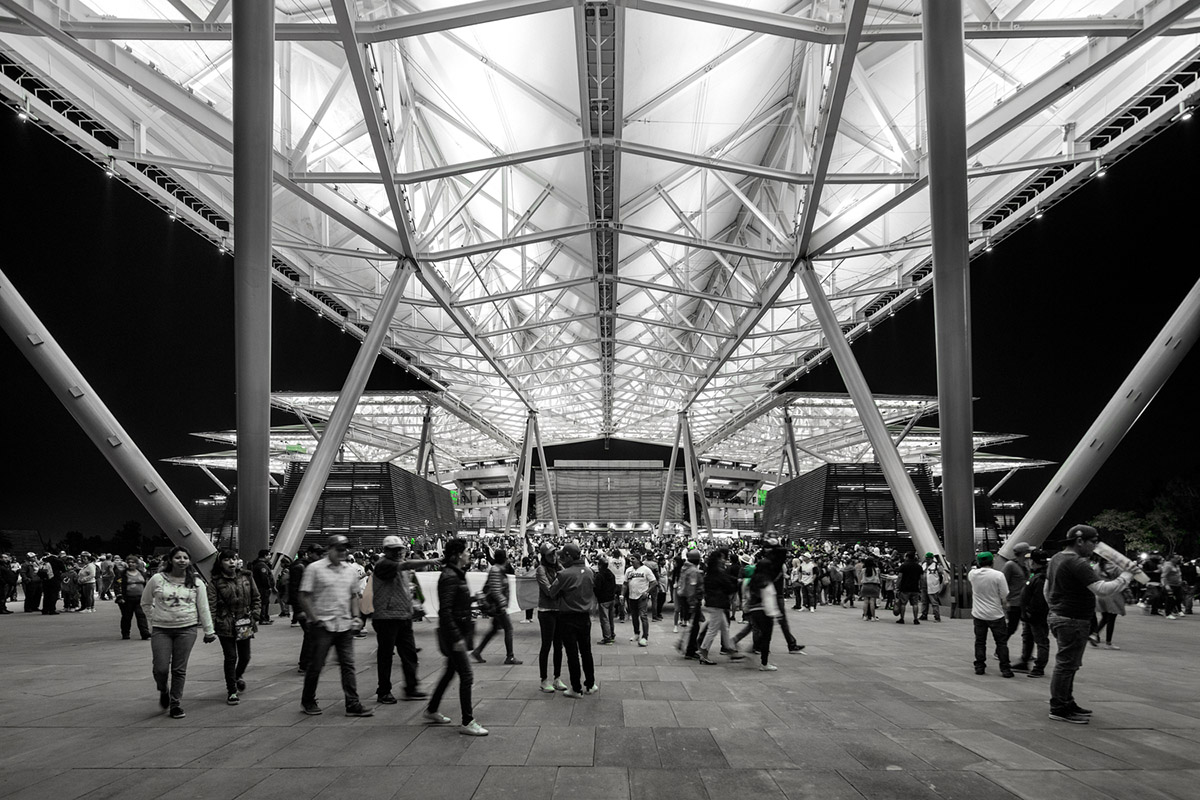 "The primary goal was, on one hand, to treat the urban context as important as the building itself while simultaneously destroying the archetype of the sports facility that is so often anti-urban as a result of a dominant impenetrable mass," said FGP Atelier.

"In order to create a strong connection to the city, the building became akin to an open amphitheater with a roof floating over it. This amphitheater was then connected with the vernacular references of truncated pyramids while the roof became more concerned with articulating structure and advanced building technology."

When visitors entering the stadium, they are confronted with six truncated pyramid-like forms wrapped in indigenous volcanic rock which creates the base, while also providing outdoor terraces at the higher level away from the arena that include food stalls and an area for socializing. 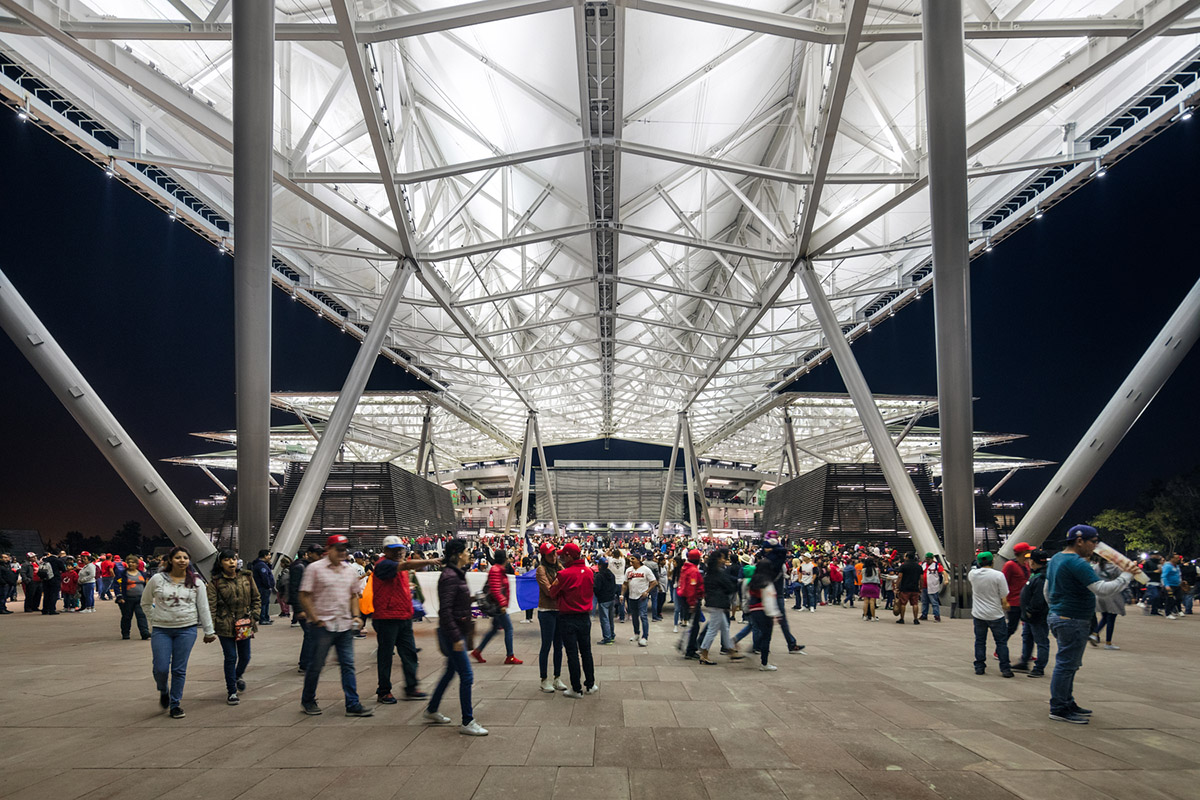 The shape and materiality of the forms recall ancient Mesoamerican temples, serving as a reminder of the country’s rich history and provide an awe-inspiring entrance.

Designed as Mexico's new stadium, the structure will be a new landmark with its iconic roof that is sharp, translucent, luminous and dynamic. The roof is made up of lightweight steel wrapped in PTFE textile material which plays with light and shadow. 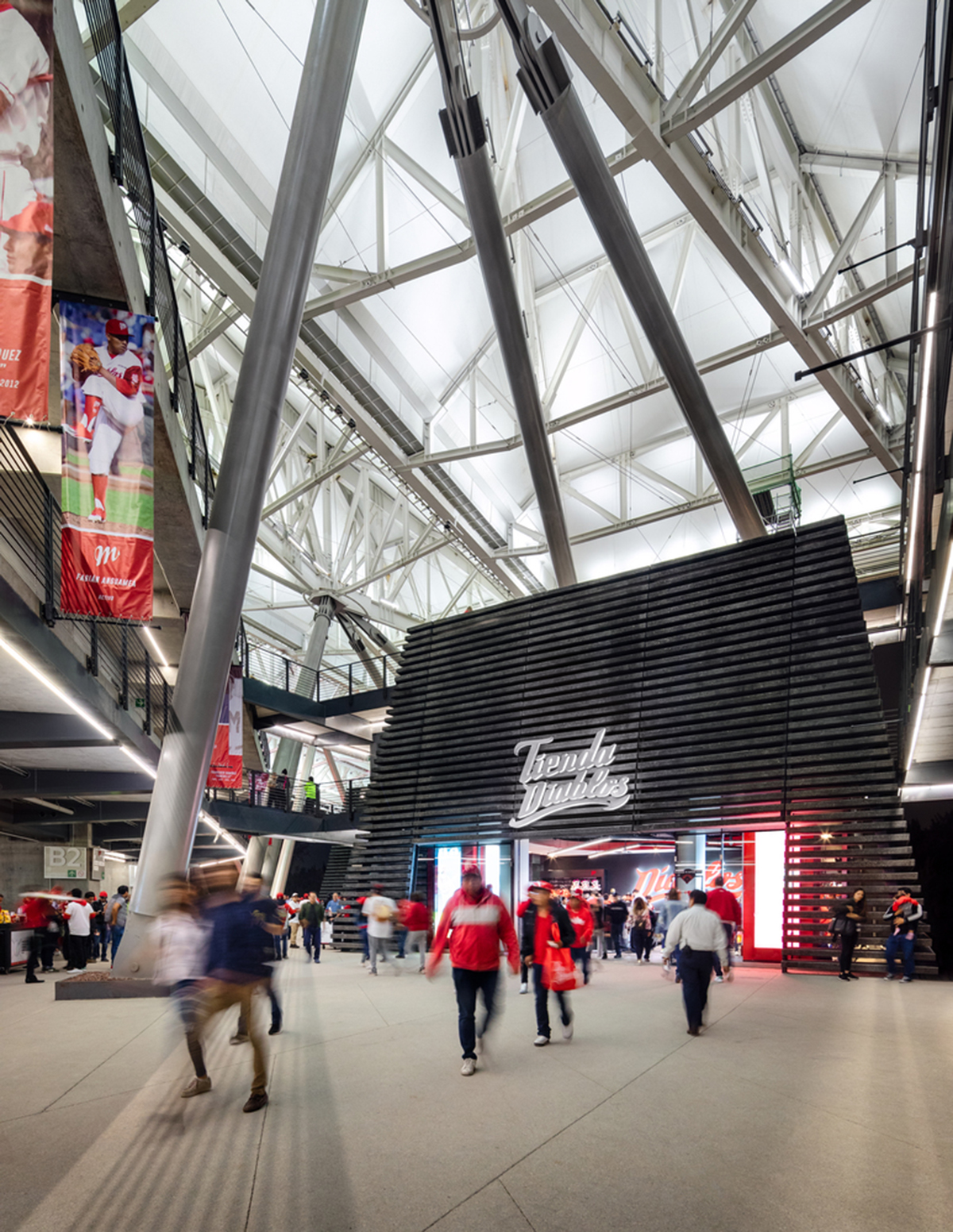 During construction, the architects and construction team used the largest crane in the world to bring the massive truss structures into one position while digital scanning techniques secured precise alignment. The roof of the stadium was also designed to collect rainwater to prevent waste.

Showing up itself as an open-air amphitheater, the key goal for the studio was to create "a great public space", where the open space is as important as the built space, which is a prominent architectural feature within Mexican culture. 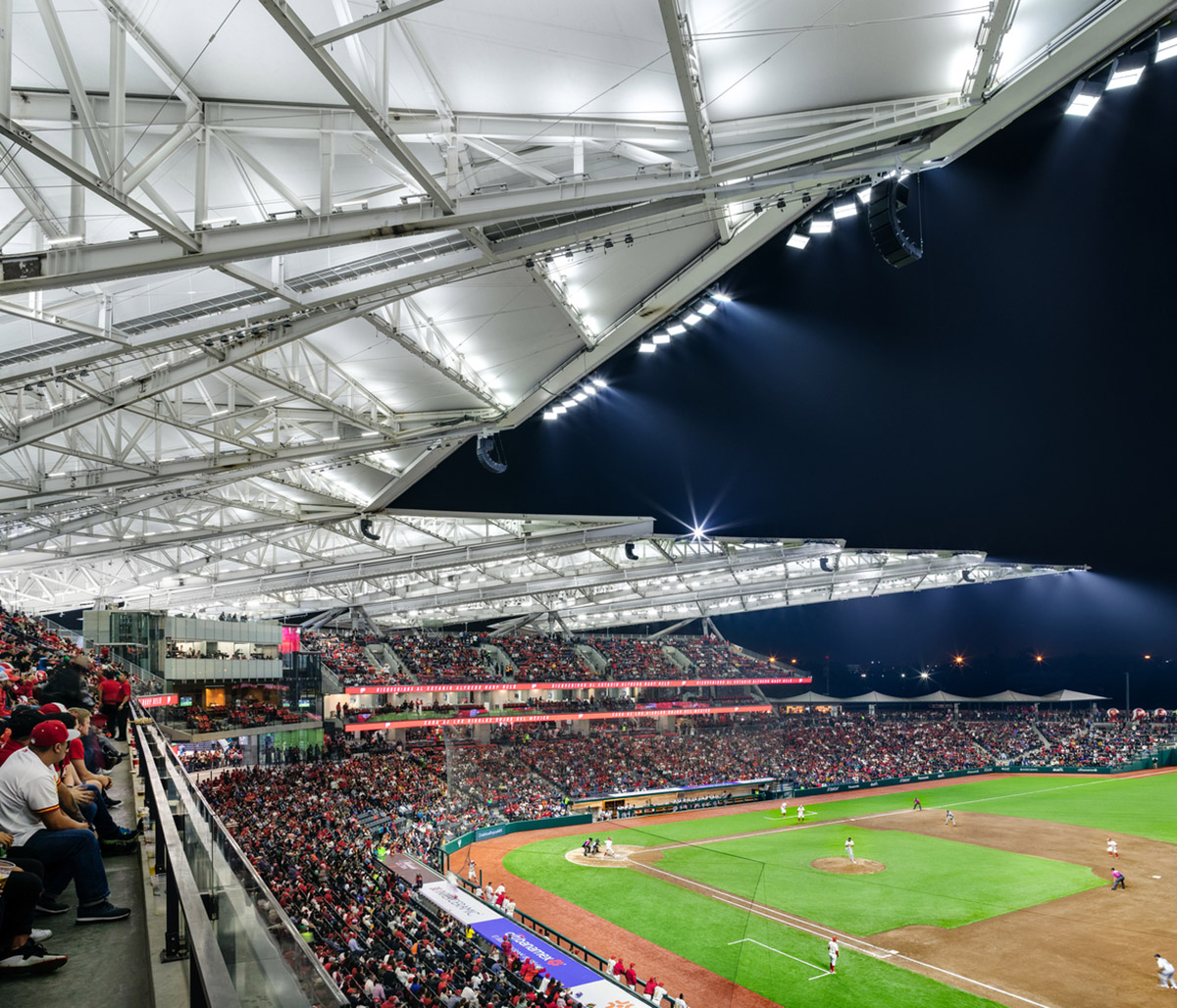 Therefore the new stadium is seamlessly integrated to four major public spaces with very distinct characteristics. The "Civic Plaza" is the point of entry located to the north and signifies the great urban vestibule, where the procession into the stadium begins.

The "Public Plaza" is located at the southeast corner and designed to be accessible throughout the year. It will support the local community by providing an integrated approach to retail and cultural programs, such as the Hall of Fame of Diablos. The "Great Berm" is where the synthesis of Mexican tradition and spirit of baseball coexist, hosting 3000 spectators. 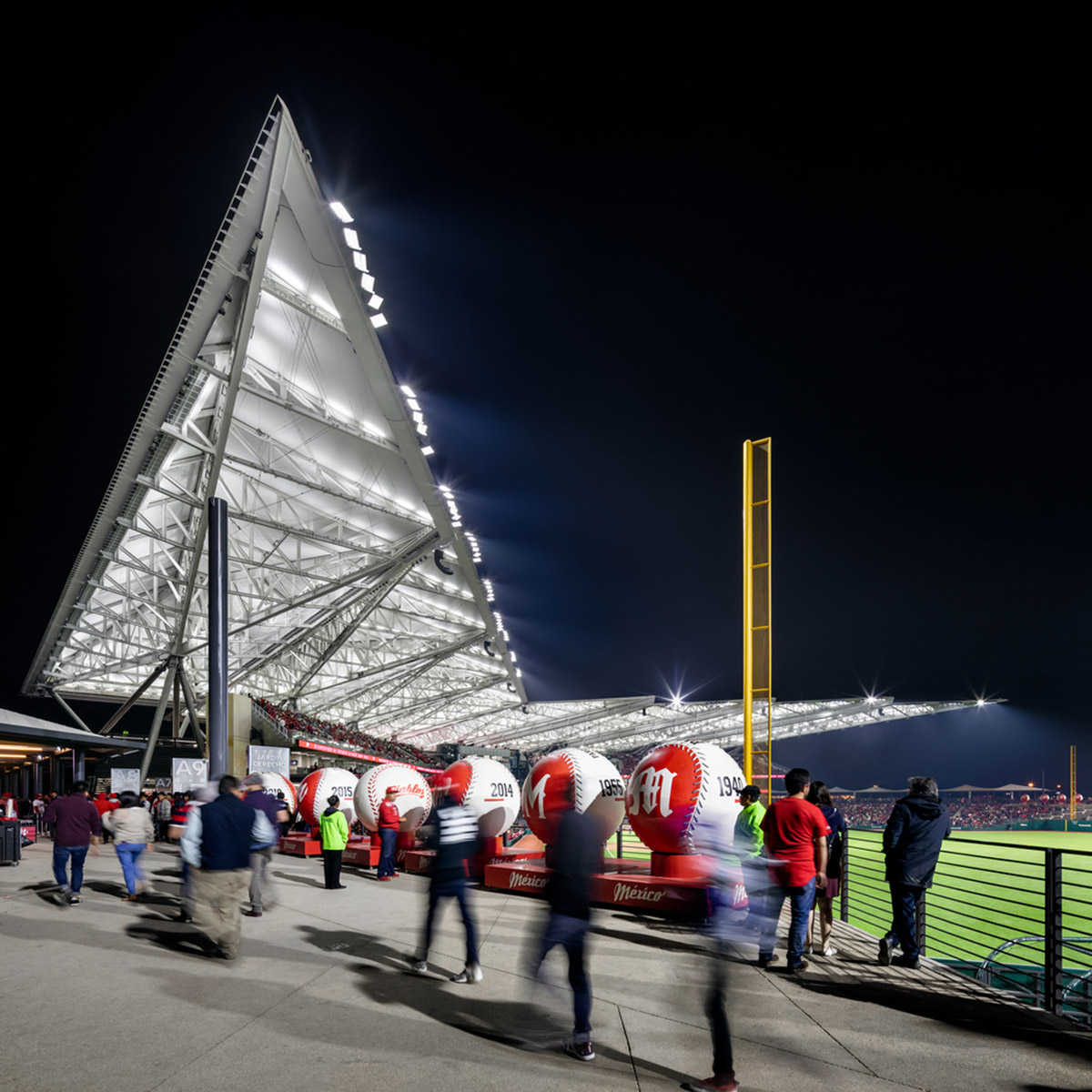 The "Gardens", which are located at the southwest corner, preserve and foster the existing local plant species and provide seamless integration into the surrounding context.

The Diablos Rojos Baseball Stadium aims to reduce energy consumption, waste and emissions. The design strives for a net-zero building using passive systems with minimal HVAC integration and active water reduction systems. This goal of sustainable design including minimal ecological impact sets a strong precedent for a new standard of building within Mexico.

The stadium also serves for different functions based on community-oriented approach. The plaza will be able to be used year-round as a new market for the community members to showcase and sell their goods - and this will expand their ability to create a sustainable source of income—and to bring a diverse group of people together. 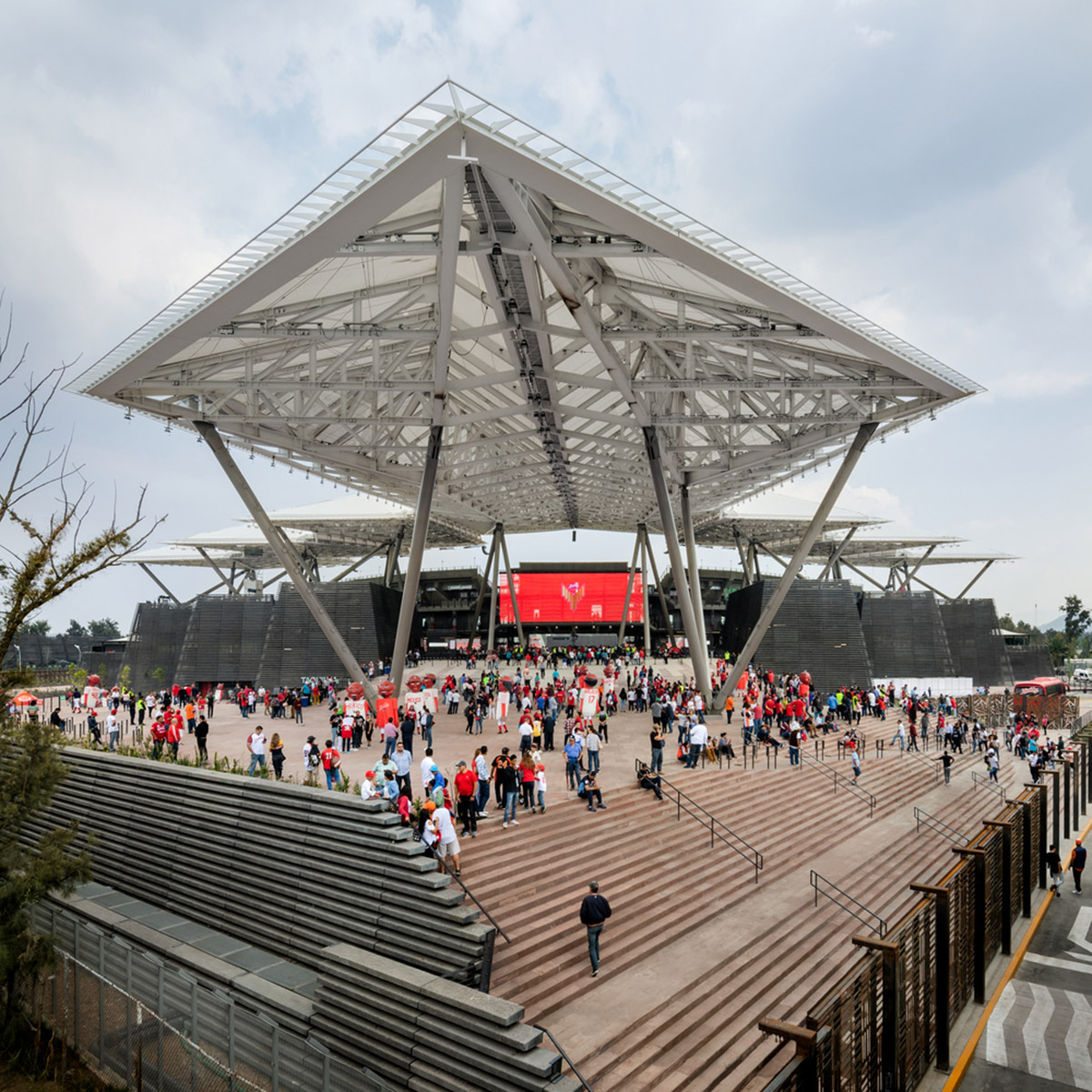 "Diablos Rojos Baseball Stadium is more than a stadium, it is Mexico’s ballpark. Our challenge was to make the stadium a social and cultural center," added Gonzalez-Pulido. 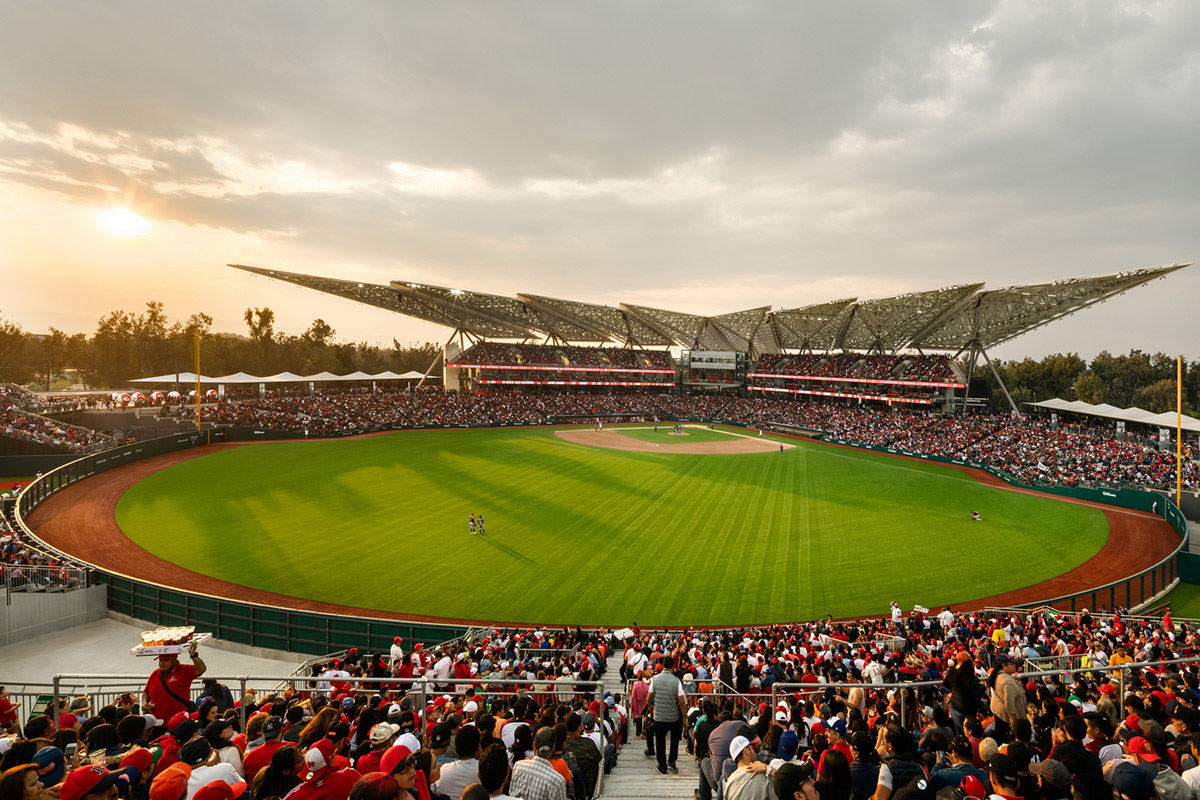