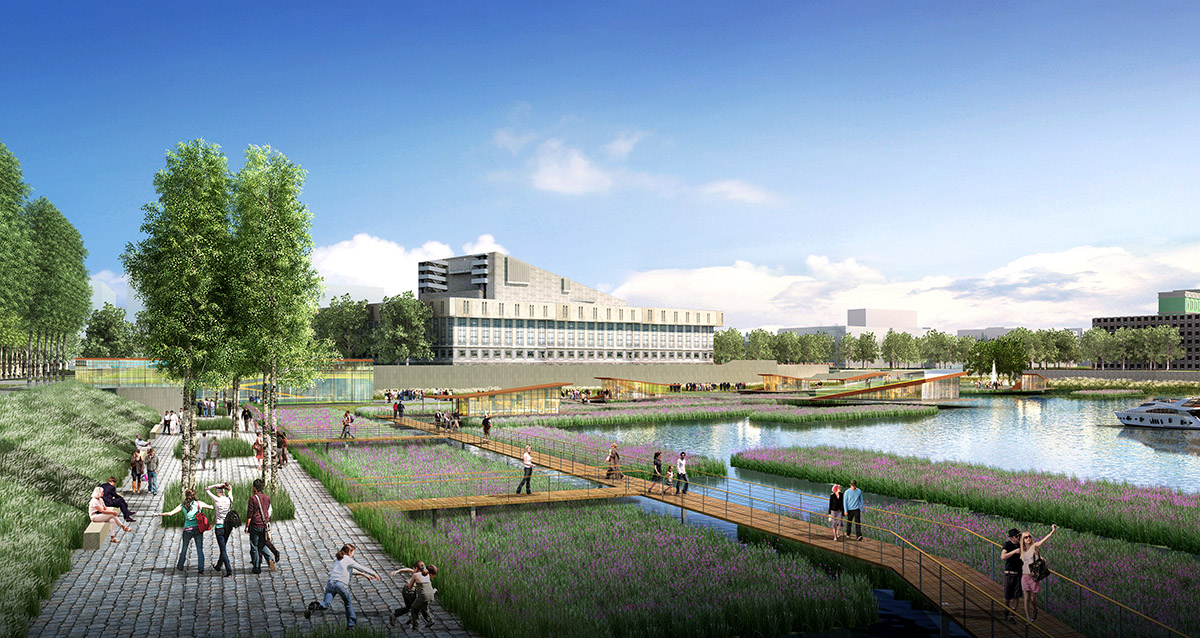 all images courtesy of Kazan Lakes

Tatarstan is changing the approach to working with public spaces. Year 2015 was announced the year of parks and squares in Tatarstan, year 2016 – the year of nature reserve water areas. The program was  implemented by Assistant to the President of the Republic of Tatarstan, Natalia Fishman. 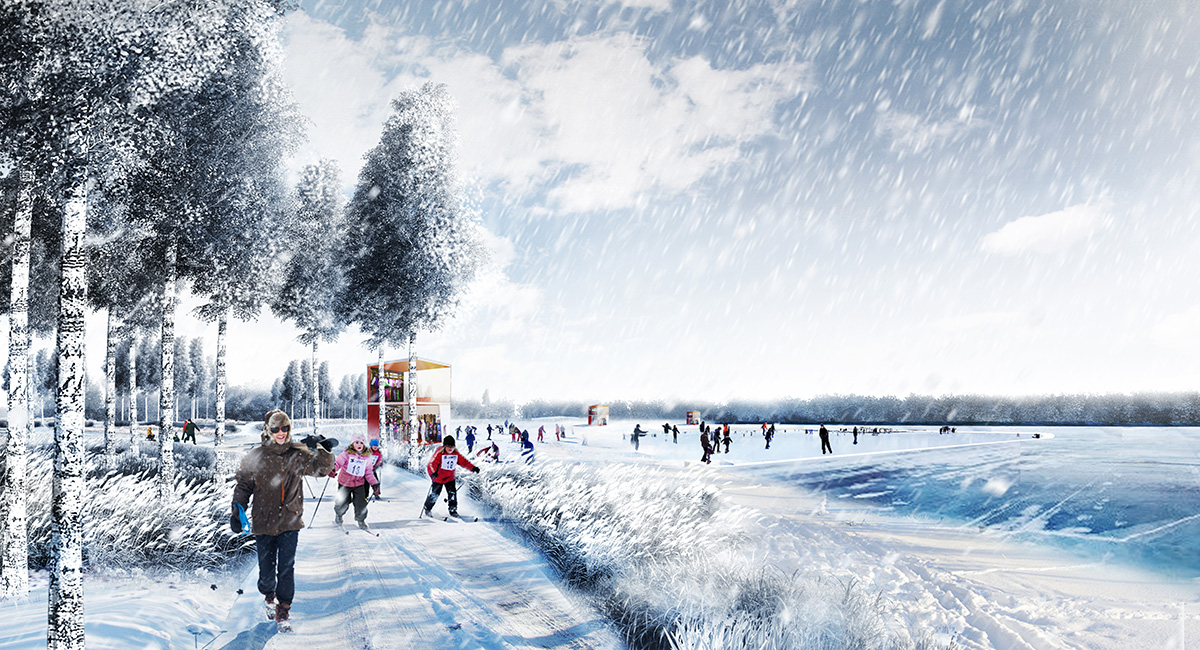 The Open Competition held on the initiative of the President of the Republic of Tatarstan, and an important point of this program is the start of working with water areas. The winner of the Competition is the Russian-Chinese consortium Turenscape + MAP architects with their concept “Elastic band: The Immortal Treasure of Kazan”. The realization of the winner’s concept is to begin at the embankments of the Kaban lake system in 2016. Their project is based on the idea to create an “elastic band”, a continuous system of landscapes along the bank line, which will preserve the cultural and historical memory and become a basement for future stage-by-stage development. The water is turning into a real living treasure and heritage of Kazan.

The basis of the concept is creation of green and blue band along the lakes, which will unite the objects of nature, culture, residential spaces, tourism and transport networks. Within the project it is expected to create 3 types of landscapes, tied into bands and turning Kazan into a stable and viable city:

1. The ecological band unites green territories into a single system, creates effective management of wastewater purification, and contributes to the preservation of ecological diversity of the region.

3. The low-speed transport band involves creation of system of low-speed transport (in the first place of bicycle transport) and improvement of public transport system, due to which the lake area will become more available for guests and more comfortable for pedestrians and bike riders.

The project was chosen by voting of the Jury of the Competition, involving the key representatives of the Republic of Tatarstan Government as well as leading international, Russian and Moscow architects, urbanists, specialists in the field of landscape design and cultural programming. 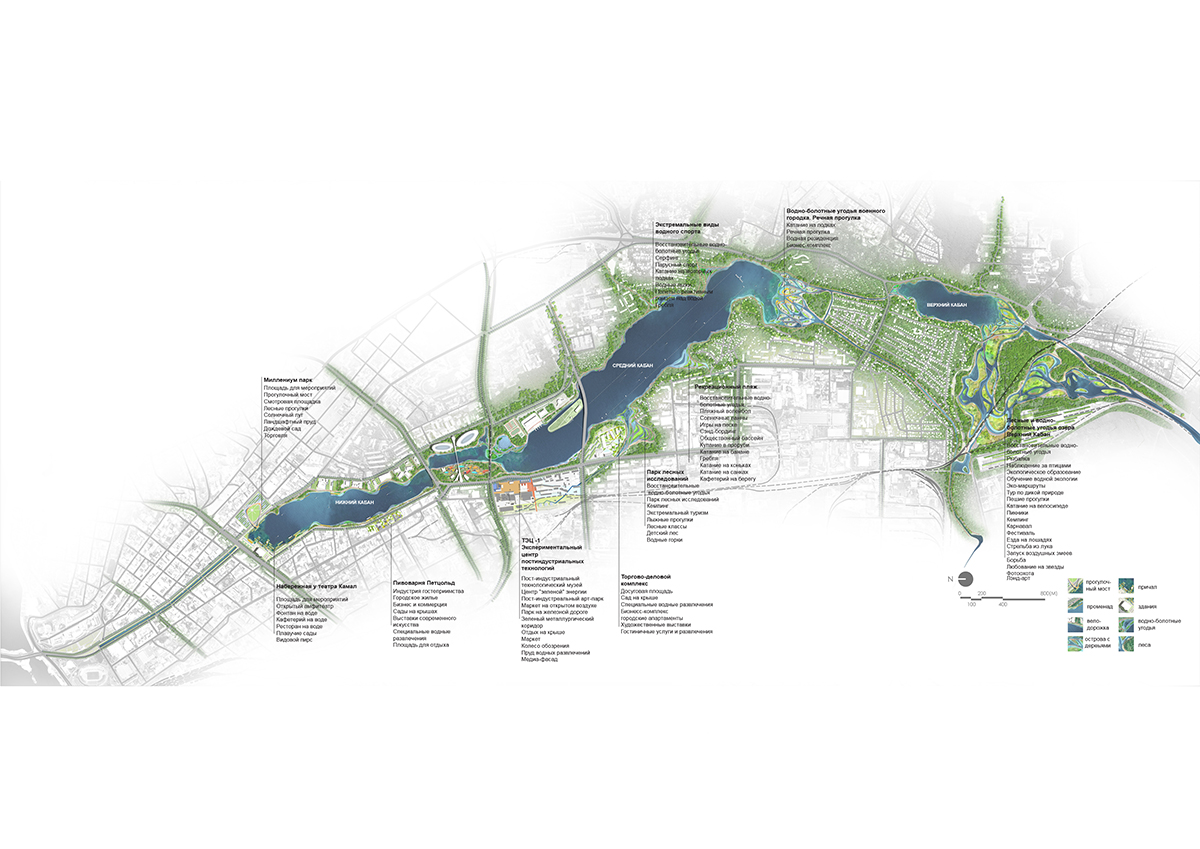 The Competition started on June 18, 2015 and was organized by “Agency for strategic development “CENTER”. The result of the professional competition was a complex architectural and city planning concept of the embankments of three lakes, considering the existing urban environment, as well as a design concept of a plot of embankment, which will be realized in the first place. 164 teams were registered for the Competition. 65 applications passed the technical expertise and were considered at the first session of the Jury. They included 34 consortiums and 31 individual participants. 10 international consortiums were included into the shortlist, among them were participants from 7 countries: Russia, China, France, the Netherlands, UK, Italy, Spain. It is these teams that developed the conceptual design of the embankments of the Kaban lakes.

Finalists were compsed rating according to the voting by the Jury:

For more information about the competition please visit website below