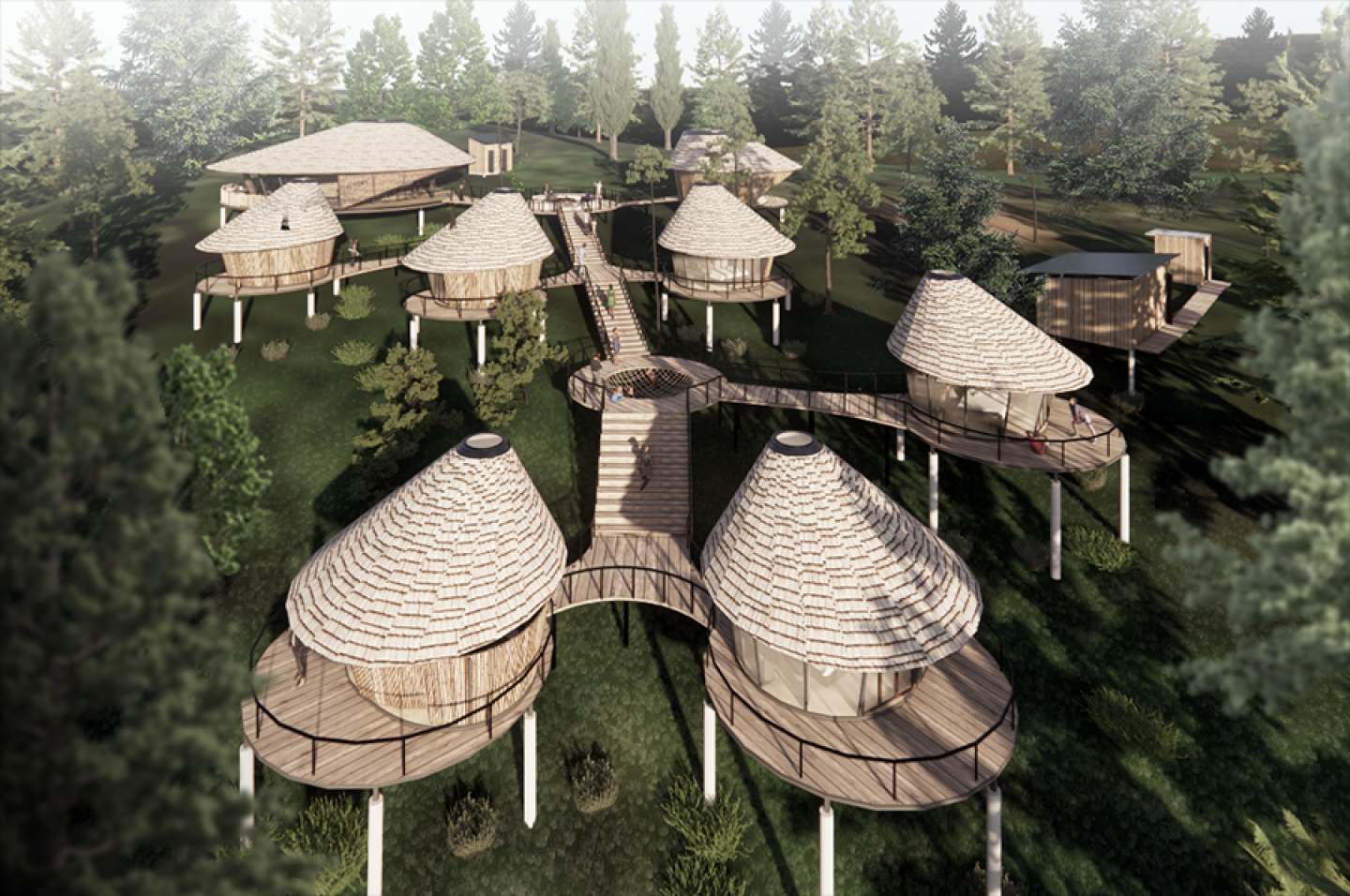 Indonesia is an archipelagic country and the 4th largest population in the world. This population density is often found in cities who have high pressure on mobility, work and stress. Many individuals need a break from the hustle and bustle of urban life.

I designed the Glamping Villa that I chose to be located on a hillside filled with pine trees, far from the hustle and bustle of the city, which aims to relieve all the fatigue of the city. The shape of the villas is inspired by pinecones that fell around the site, connected to each other by paths.

Each room has a second floor that allows visitors to relax and playing with their children. above the second floor there is a hole that can enter light, this shape can create a warm and refreshing impression for the occupants in it, as well as for natural lighting, so you don't need lights to illuminate the room during the day. It can be found in the other buildings too like the restaurant and lobby.

at night, visitors can enjoy the stars by a bonfire or while walking on the path that has been provided. The restaurant is always open 24 hours and from here we can enjoy the atmosphere of the pine forest with a refreshing aroma. from the room we can also see the stars on the second floor through the hole in the roof. This will provide a unique experience for visitors.

Likewise, good architecture can provide a unique experience for visitors through their senses, such as eyes, smell, skin, and textures formed in the building. This project aims to redesign each urban block and connected it in tandem with a linea r transportation system. An intertwined approach is used to try to solve the problems of the city. The four specific zones identified—based on opportunity and potential—are characterized by different strategies and uses. They can be described as: Waterfront activities center, Cultural and Creative Center, Agricultural Trade and Food district and innovation center.Coupled with citizen participation, allow users to customize their own street activities and behaviors. We aim to provide a sustainable urban design that belongs to the local population!

Beirut is one of the oldest cities in the world, devastated by the Lebanese civil war 30 years ago. Its cultural landscape underwent major reconstruction. For nearly three years now, Lebanon has been assailed by compounded crises—specifically, an economic and financial crisis, followed by COVID-19 and, lastly, the explosion at the Port of Beirut on 2020, the economic lifeline of the city was forced to stop functioning. —“After the explosion: What’s next for Beirut?”

This project takes a bold approach towards rethinking the future for Beirut by adopting a strategic tactic to incentivize and distribute development across the neighborhood. In the hope to convert it from a transient neighborhood, with little or no relationship to its various adjacencies—namely the Medawar district, Saifi Village—the strategy adopted here is that of re-linking by a new public transport system and re-negotiating thresholds to create an equitable and sustainable future.

"Re-intertwine" adopts the design concept of the 15-minute city that integrates different modes of transport, including cycling, and increasing green space and public space. It takes an interesting user-oriented approach to developing multimodal solutions for every user profile, using public transportation to get to different hubs in the neighborhood.

It is our belief that Beirut can develop towards becoming a city of diverse tech nodes. Thus the project aims to reimagine Beirut by leveraging its unique location and proximity to waterfront, by attracting investment from international businesses and neighboring countries in the Mediterranean, converting excessive infrastructure from a liability into an asset, reconnect people to water and nature to have a place that's more human skin, more calm and protected.

This project will be led by local administrative units or professionals in its overall urban planning direction. Local residents can participate in public space decision-making in various areas..

In the process of urban planning. Public participation can increase the usefulness of the space through the use of a mobile app. Transparency of the cost, time and different functions of urban development. People can understand the future of their city through APP and AR. We have designed a variety of activity opportunities in four different activity directions. Let citizens customize their open spaces. The public can participate in the process of regional planning. Build cities that serve the public interest.

This project rejects the traditional urban design scheme of top-down and bottom-up. Instead, it adopts cooperative urban planning and design, and distributes its creativity and voice. Rather than redefining power relations for decision-making, the purpose is to strengthen collective practice and interactions between professionals, local governments, and citizens.
■ Studio：11X STUDIO for Architecture and Urbanism
■ Designer：Qin-Chao Zhou (Co-Founder & Design Director), Wan-Hsuan Wu (Co-Founder)
■ Instructor：Charles tzu wei chiang
■ University：National Taiwan University of Science and Technology (M.Arch) Humans have always been exploring nature. From the plains to the hills, from planet Earth to the Milky Way. Mars has too many attractive exploration factors, such as rich topography. Therefore, Mars is no surprise where people are eager to explore in the future.

Due to extreme natural conditions, human habitats are almost impossible to establish. In the uninhabited desert areas of the earth (Similar to the Second Nature), cacti grow. People are impressed by cacti's ability to adapt to extreme environments. People borrowed cactus biology and started to build their own Mars home.

By extracting the five main biological characteristics of cactus which are helpful to adapt to harsh environment, we try to translate them into the space design of Mars habitat which will help our design adapt and respond to some special and severe environmental problems on Mars.

4 Thorn & Flower - Simulate the thorn and flowers of cactus to form a functional epidermal system to meet satisfaction of daily life needs.

We take the advantage of algorithm. By trying to extract cactus's feature to define its shape and growth mechanism, then we compile the cactus generation algorithm to generate the external shape of buildings. This helps us to generate different types of design projects quickly and efficiently.

【Imagination of The Third Nature】

The algorithm can generate innumerable cacti, but how to create the third nature of Mars is what human beings should define and what we want to discuss most. We look forward to the third natural habitat of mankind, which is in the ascendant and full of vitality.