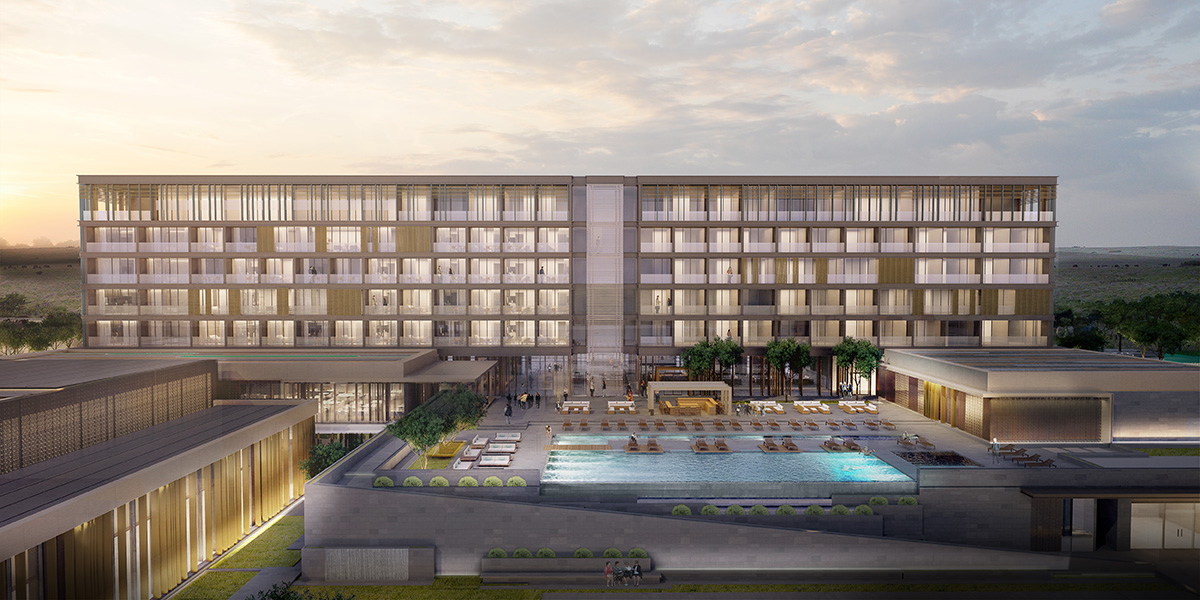 The Congo Kintele Congress Centre, which is located in the Kintele Region of Congo’s capital city Brazzaville as one of the two significant designs currently under construction in Africa designed by Avcı Architects whose business volume comprises international architectural projects to 80%, finally opens to the public.

The Congo Kintele Congress Center – a project that embodies several complementary functions in addition to a resort hotel accomplished with the support of Turk Eximbank, which operates under the control of Turkish Ministry of Economy – is intended to also host summits of the African Union at which country presidents will participate.

The congress center being constructed to host summits of the African Union is designed in complete harmony with the geographical, climatic and cultural context it is located in to satisfy the sustainability criteria which Avcı Architects takes as the most important starting point in all of its projects. Located in a newly developing area of  Brazzaville, to the north of the new Olympic Centre, the site of the Congo Kintele Congress Center has panaromic views of the Congo River to the south and a forested unbuilt landscape to the north. The topography of the site is a valley carved out by the great Congo River which creates an island M’Bamaou in the foreground and the buildings sit parallel to the contours of this valley falling towards the river.

The positioning of the buildings on the site is largely dictated by the site’s topography, while Avcı Architects developed a design where the 1500 seat Congress Hall, the 300 person Presidential Hall, the 1000 seat Banquet Hall and the 1000 person Public Piazza are placed in a line sequence interrupted by courtyards, and all reached by a public sheltered collonade that links these elements. The Hotel on the other hand is positioned 5 meters above this general public promenade, largely to give it better views to the river, while making a public / private segragation of functions on the site. 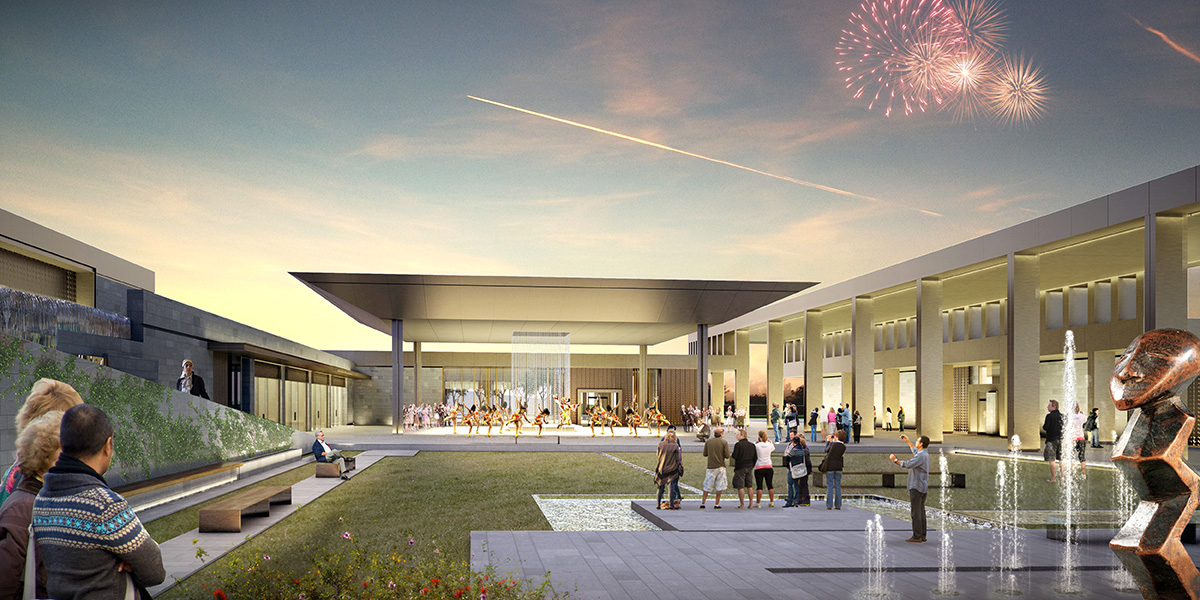 All but two courtyards linking the enclosed volumes are accessible to the public, and allow to form landscaped intermissions amongst the large masses of these functions. Thus the form of the Congo Kintele Congress Center settles in to the landscape, avoiding the appearance of an out of scale overbearing large mass of buildings while providing views of the Congo River from all hotel rooms.

The 350 meter long collonade also acts as a linear public space in itself sheltering people from the ever present rain that prevails most of the year around in this part of the world. The two ends of the Collonade also act as public gates to the whole complex.

Attached to this public collonade are the Press Hall to the Western gate and Museum to the Eastern gate. At this end the Museum forms the southern edge of the Piazza, while the shops and the Public Restaurant form the Northern and Eastern edges of the Piazza. This open space is also sheltered from the rain with a square occulus that allows the rain to fall in to a shallow pool at its centre. 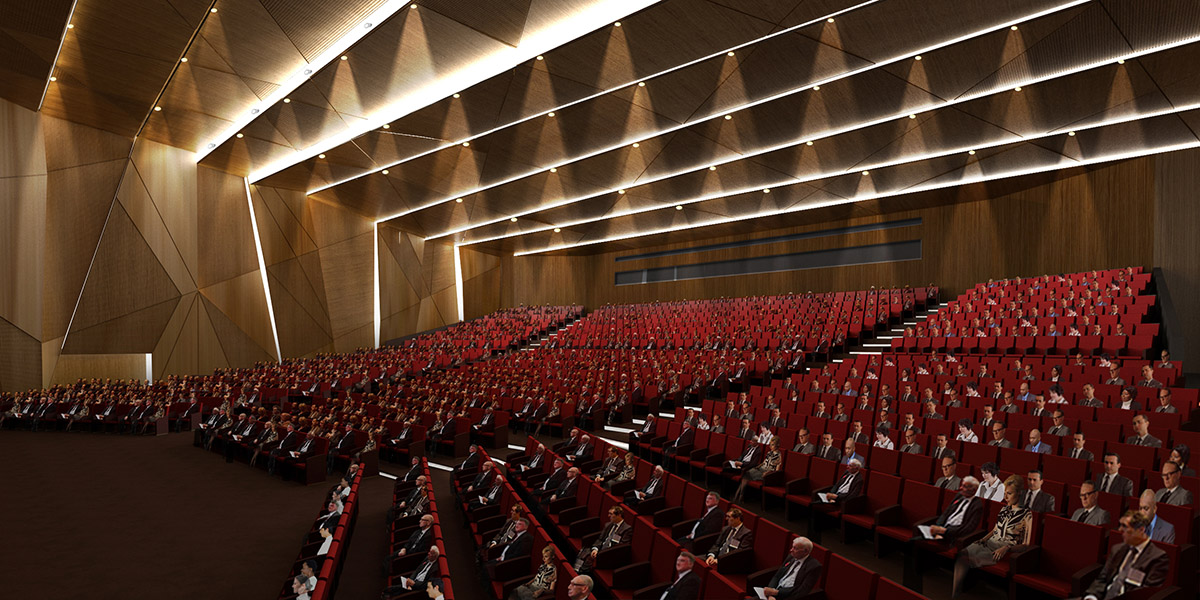 Avcı Architects created special configurations for the rain which is an everpresent climate phenomenon in Congo for at least 6 months of the year and defines the way people interact in public and with public space. Therefore great effort was made in this sense to shelter people while out in the open but to not distance from nature, and the presence of rain because while it is raining it is still very warm and ofcourse humid.

Therefore while it is important to shelter from rain it is also important to allow air to flow and cool such sheltered spaces. The presence of water is celebrated by making its fall from roofs visible and audible as it reaches the earth and fills open pools which take overflow from large roof areas using gargoyles and water falls. 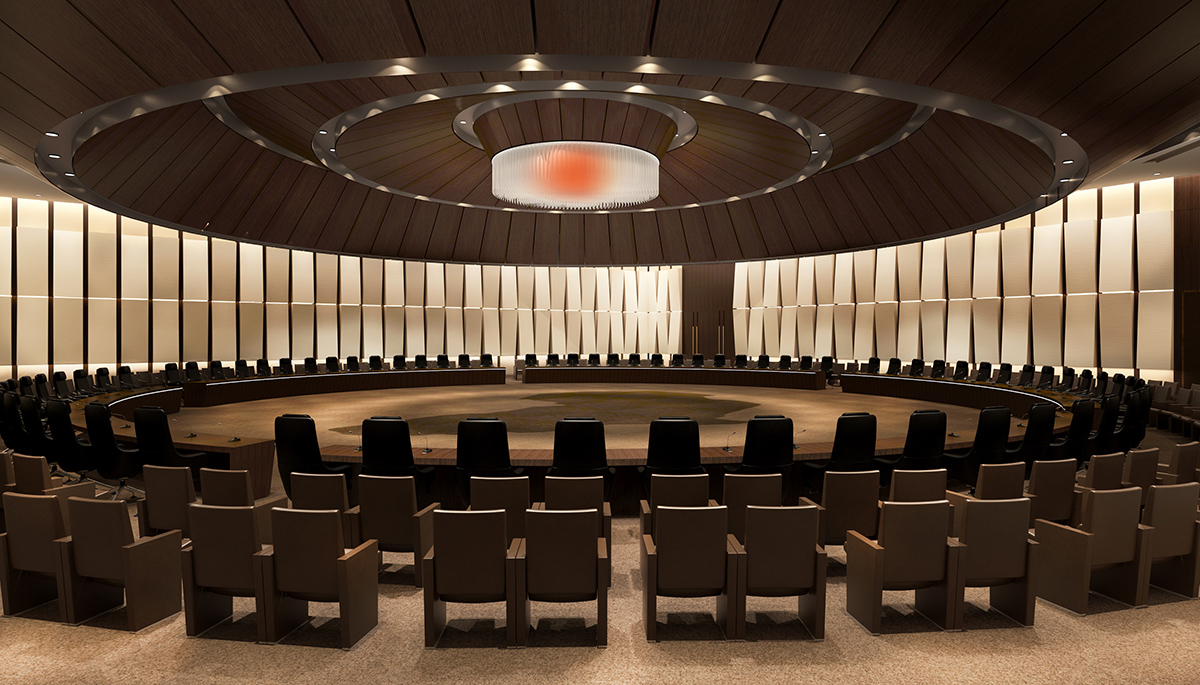 Avcı Architects took efficient measures also against another aspect of the local tropical climate, namely the constant presence of a high level of humidity which makes use of natural ventilation as a way of minimising energy consumption difficult and the use of  airconditioning of public spaces essential for comfort conditions to be achieved to acceptable comfort standards. The main objective in this case was to minimise the cooling loads by reducing the incidence of sunlight on exposed glass facades.

Thus glazing is always deeply set in to the façade on the north (in this case it is actually the true north façade which receives the midday sun due to the location of the Congo Kintele Congress Center below the equator) and low sunlight from the east and west is minimised by vertical shading elements and perforated metal screens. 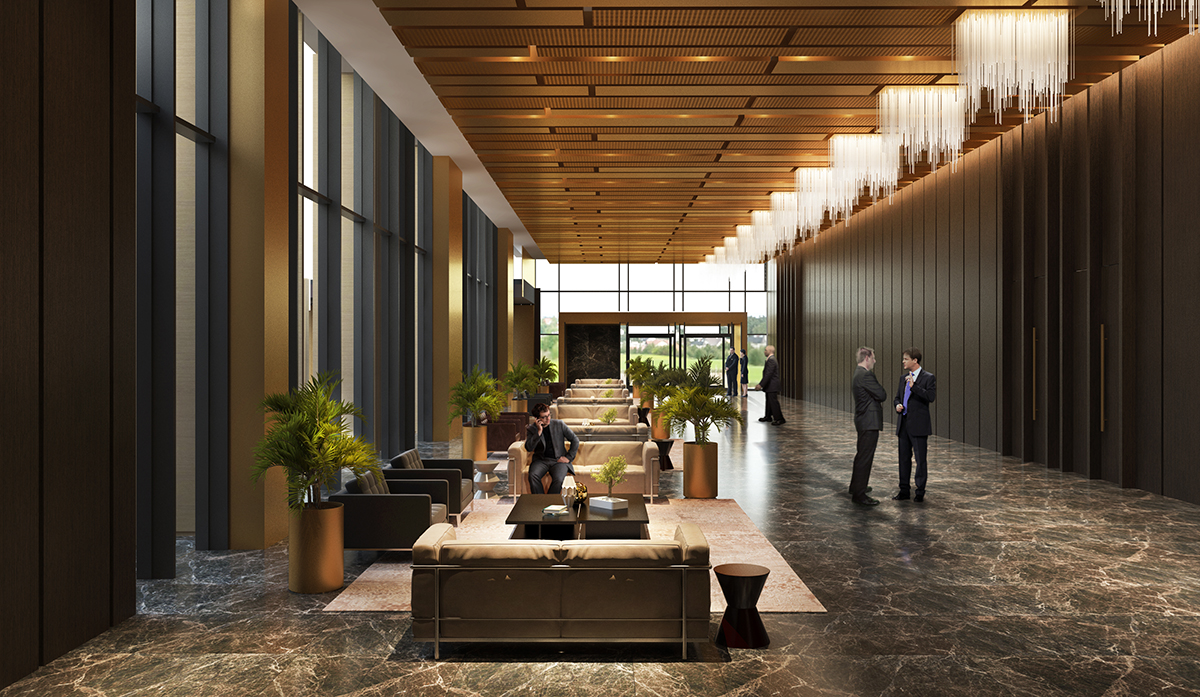 The use of materials in the Congo Kintele Congress Center were to a large extent dictated by the requirement of speed of construction, and availability of modern construction and cladding materials. Thus although it would be more cost effective, concrete frame was ruled out in favour of steel and more easily transportable lighter cladding materials such as aluminium panelling for massive cladding elements such as block or brick work. Beyond that, efforts were made to use natural materials at all times such as timber, and stone. 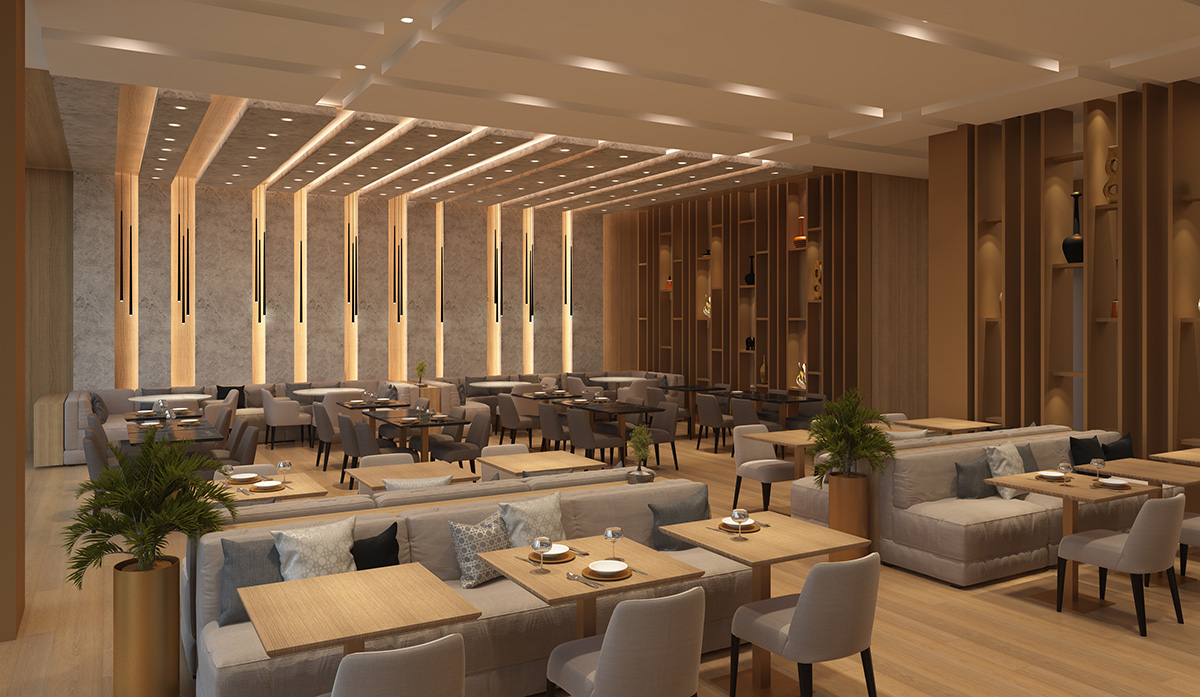 The larger elements are signified by a series of perforated cladding elements which are laser cut in geometric Congolese patterns derived from the traditions of the larger region, connecting the buildings to their place. At times these patterns find themselves recalled in interior elements such as floor patterns and screens which divide interior spaces, and at times on external wall elements creating shading or privacy between inside and outside.

Vertical shading elements are a lighter coloured bronz/brass finish, set against a background of larger darker coloured panels and of course glass. The overall colour palatte of the project is infact derived from a series of lighter and darker shades of bronz and brass. 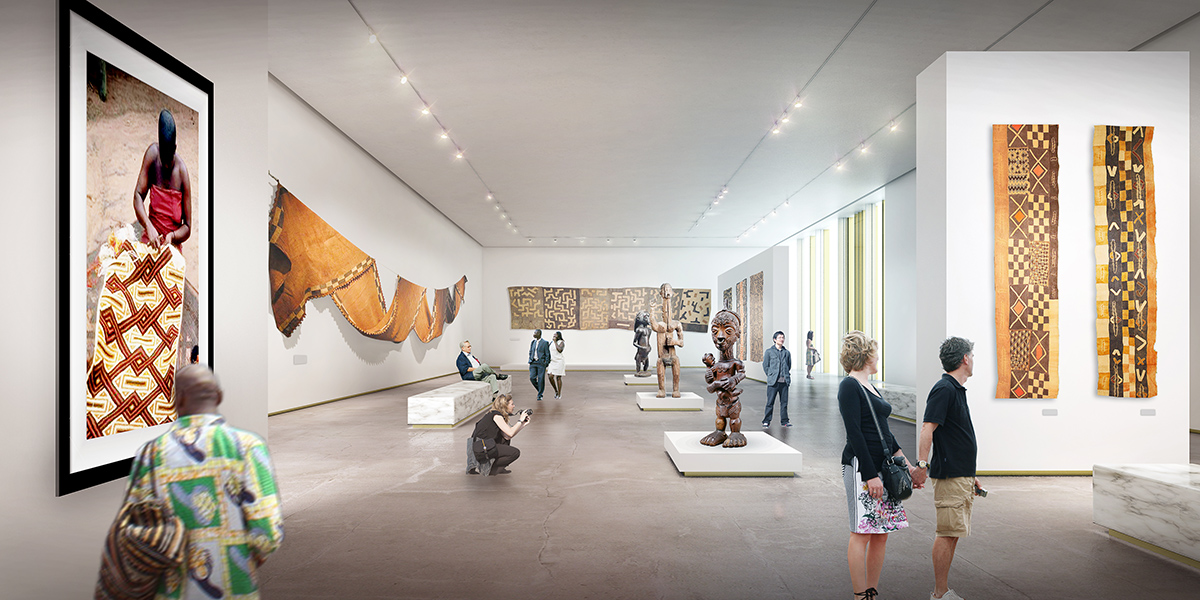 The 200 bedroom Kintele Resort Hotel also acts as an adjunct to the Kintele Congress Centre, providing both facilities for some of the presidential guests, with 6 presidential suites and their entourage, with a series of suites and standard rooms.

On the ground floor are the spa, restaurant, bars and the pool all of which stand 5 metres above the level of the Kintele Congress Centre, providing panoramic views across the Congo Valley. 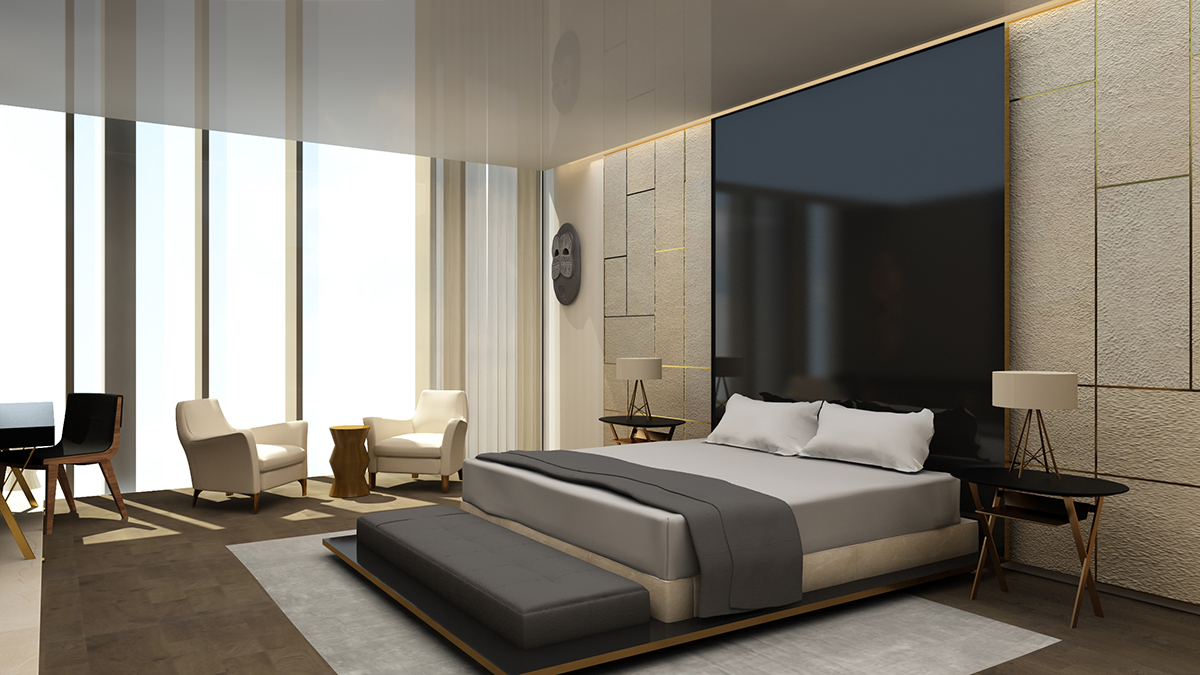 The current works undertaken by Avcı Architects abroad include a Ministerial Campus simultaneously ongoing in Brazzaville, a mass housing project in Baku, and a city planning scheme at Saudi Arabia’s petrol city of Al Khobar.

Avcı Architects, led by Selçuk Avcı, has offices in London and Istanbul, and founding partner of Urbanista Real Estate Consultancy Co. The first company privately owned by him was established in the year of 1989 in London, with the name of Avci Jurca Architects which later on was turned into a multidisciplinary design-leading studio with offices in London, Istanbul, Budapest and Belgrade.

All images courtesy of Avcı Architects