Flesh_tanbul is a proposition for the subaquatic archeological park of Yenikapi in Istanbul. The grounds of a forgotten harbor for more than 16 centuries restructured into a subaquatic museum transited through a hammam. We face the preservation by the evolution of a new cultural tourism where history and body create an emphatic bond.
Flesh_tanbul folds with the exterior, it flows towards the landscape, not imitating its forms but its evolutionary process.
The historical curved line-up of Instanbulian´s domes compaction is sophisticated into a net of funicular catenary curves, assuming the cultural landscape like a genome-formula that solves the structure.
The fold in the inside contains the atmosphere, it is the management of a thermodynamic “dérive”.
The essential is to receive our bodies as in an ecological relation to the space, namely to dip into the mechanism of the corporal thermo-regulation in order to lower the global enthalpy of the project. It’s about generating a multiple system of passive strategies and interlink them to the net of thermal sensations of the body.
For instance, the difference of temperature of a dry bulb in the interior of the building would be about 10°C-11°C between summer and winter, but by modifying all the thermodynamic variables of the space (such as: relative humidity, speed of air, conduction of the soil, rate of renovation of the air, ect. …) we would be able to level out a thermal sensation of 24°C-25°C in the course of one year.

This thermodynamic adaptability implies energy savings up to 35%, not because of its mechanism but simply because of its concept. All elements evolve culturally and energetically… just like the “environmental ornament” which explains the energetic transfers of the environment….this ornament will transude in order to dispel heat, or shiver trying not to lose it.
Creating an empathic link between user´s physiology and the energetic sustainability of the space… always by an evolving vision of the culture.

flesh_tanbul by Juan Jos Snchez Martnez in Turkey won the WA Award Cycle 13. Please find below the WA Award poster for this project. 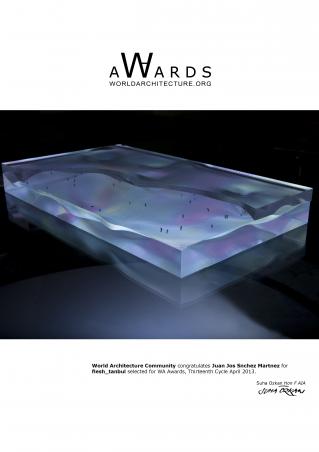