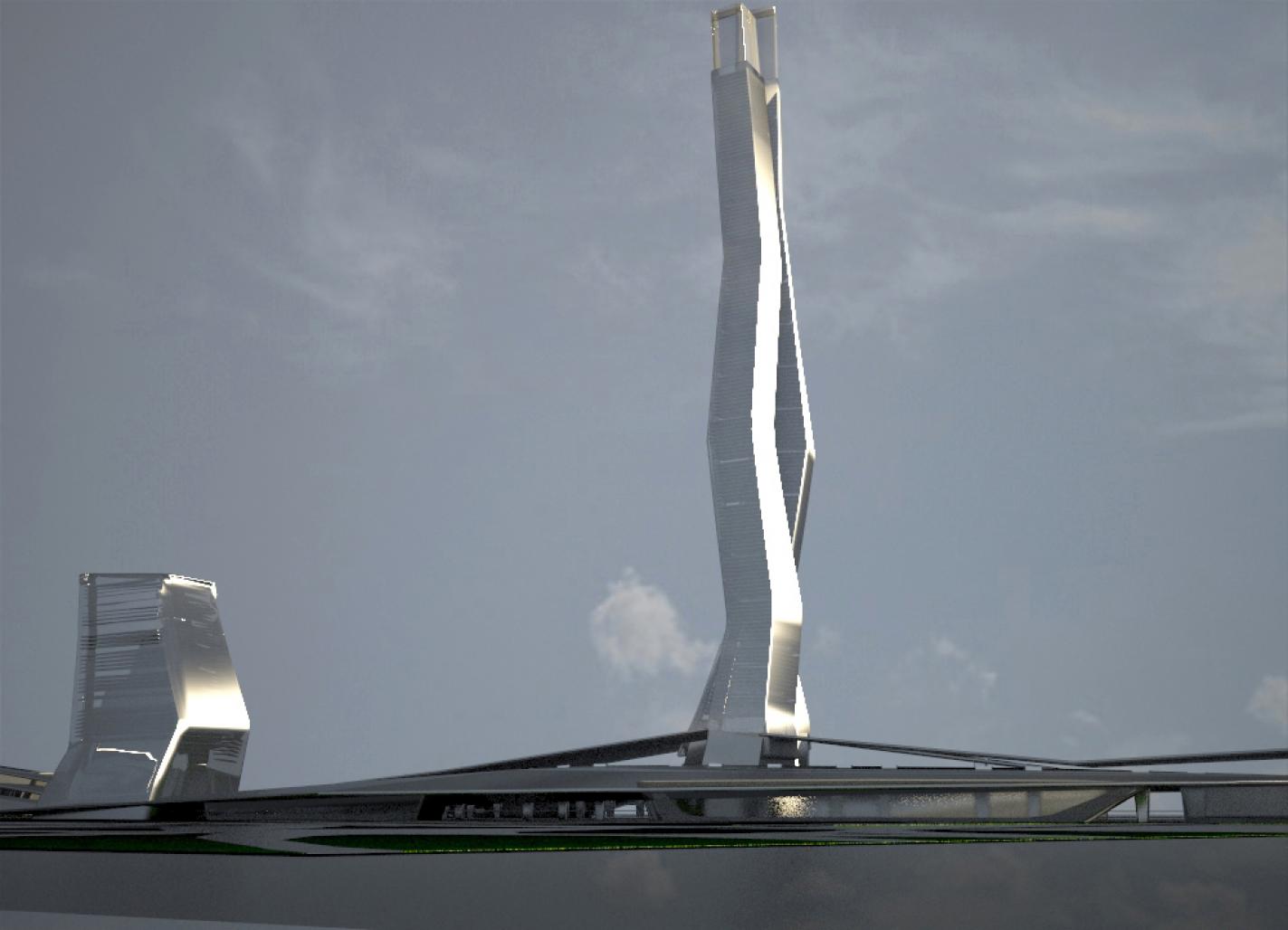 This is a project for a vertical-horizontal architectural and urban system designed for a location on a suburban area close to Shanghai, in China.

This systems is a real urban macrostructure because its big dimensions, its impact on the territory and the life in the area and because of the complexity of its own nature.
The system in fact hosts several public functional spaces, from office spaces to commercial and leisure spaces located both in the vertical and horizontal elements of the construction.

Despite of the dimensions, the macrostructure is anyway and always thought to be a light texture connecting in an organic and natural way itself with the environment.
.
In order to keep this kind of relationship with the environment, the macrostructure is designed as a fluid system, growing from the ground and culminating with a very thin vertical element, that is a composition of two tubular structures intersecting and sustaining each others because of their position and shape.

Beside this, the macrostructure becomes a very aerial and permeable construction when it’s close to the ground, where longitudinally cut surfaces cover different sizes glass volumes; for this reason the communications on the ground level are easy and continuous and the space id open to the environment as much as possible..

The lightness of the structure is also underlined by the thinness of the vertical element-tower, a sophisticated symbolic sign, defining itself in the sky through a gentle but firm and sharp aspect.

The structure is 470 meters high and occupy an area of approximately 37.000 square meters of footage, not including the covered but open spaces and develops itself for 107 floors in the towers and 37 in the lower building.

Glass and aluminium are used for the vertical and horizontal closures, coatings and finishes, while steel is used to the structural parts of construction.

Green areas are provided on the ground floor and scattered vertically along the towers and the lower building.

The language of contemporary and minimal architecture is used in order to give a sober but culturally and technically advanced image to the construction and to conjugate culture and poetry with a social and economic reality in a sensitive way.


The design of this macrostructure wants to express and satisfy a sophisticated need of elegance and culture for the city and the territory.
The project is a proposal under evaluation and its construction is eventually scheduled for 2015.

The structure is 470 meters high and occupy an area of approximately 37.000 square meters of footage, not including the covered but open spaces and develops itself for 107 floors in the towers and 37 in the lower building.