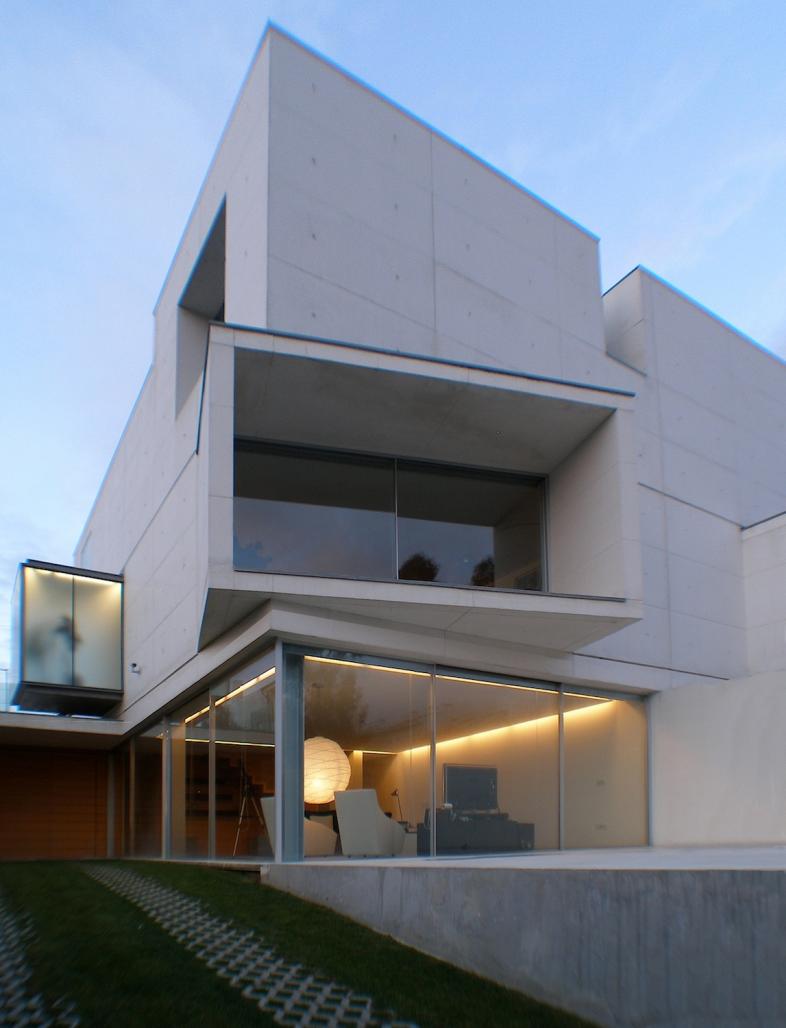 When confronted with the opportunity to do this project, a family house in Canidelo, Vila Nova de Gaia our concerns began to explore an architectural object, which obey the limits of lot 14 X 7 meters, the program required them to be exploited and architectural issues that we consider to be fundamental in architecture.
The interpretation of the world through the recognition of abstract geometric structures, it was like in the past in present, an object of study and understanding of their own kind of beauty in the world.
From simple forms to more complex, whether symmetrical or balanced, the composition of a good way seems to be inherent in a set of geometric structures, in which the parts and the whole work as one.
Accepting these assumptions as leight motif to our establishment, we sought to develop an object which itself would have a geometry so strong and so unified that any construction that would unite this in the future (lot 12), would never lose the power to be a single architectural object (1) leaning against a foreign element, the other (1).
In developing this research, and for reasons that had to do with the design of the lot, we accept that the square, pure form, could serve as a basis for the composition of plants and elevations, which resulted in hierarchy of spaces and voids, which greatly expand in different dimensions.
In addition we are also interested in the issue of massas dimensional element generator of space, ie, the search for a volume that could be excavated depths resulting in the second play of light and shadow.
Present on this building almost surreal irony, that the mass can levitate, reflecting light.
We determined that, based on the dimensions of the lot, emerged a rectangular body, which could be split into two 7x7 cubes. The configuration of the terrain and the difference betwen a front rank of the land to another, corresponding to 3 meters, which allowed an extreme volume could land at an elevation above the street and the remaining legacy in apparent suspension.
This time, the program beyond the traditional rooms and facilities, Sanitary Floor 1, input, distribution area, kitchen, toilets and common room on level 0, and social room, toilets, office and garage floor -1.
In order to reinforce the idea that the geometric structure is part integral whole, the space program were divided into hierarchical and regular structures. Ie in multiples or fractions of our original 7x7 square.
One of the questions that seemed very interesting, reflecting a gesture of modernity, is the composition of bodies by balancing visual rather than by symmetry. That is, we look forward to elevations, despite sustained a regular basis, find your balance in visual composition of the opening spans.
On the other hand, and leading to extreme esterotómica the notion of whole and parts as one element, we chose to build this mass of white concrete, concrete, why is it really matter production
Architectural contemporânedade and white because it is closer to the purity, and the whole.
Apart from these issues or merely formal and conceptual dialogue with the customer always served as motivation for establishing new borders.
The resolution of the issues we consider essential for the formalization of the volume, began by asking the amendment to permit the allotment, and it is this point that the project comes from the other lot, completely revolutionizing the ones that were the initial premises.
The understanding in a way that was not thought to be married and suddenly, around the symmetry, resulting in dynamics that reproduce the operation with 1 +1 = 1. Two homes that, whilst respect differences among customers, has the balance between the two volumes, guaranteed to drive while the complexity of the divergence in the properties of spaces.
The accuracy of the mesh that supports the spatial structures, extends beyond the two-dimensionality to the third dimension by incorporating the rigorous construction, continuity plans, the sequence alignments and stereotomy.
The clearance of the final form is the condition more severe, emphasizing the mass of white concrete and other materials by reducing the expression smaller. The concern of almost nullify the term of boxing, reading back a massive block pierced by embrasures.
The continuity guaranteed by the materiality of the white concrete is discontinued when the spans of days to represent shadows, at night if Brighten reversing the relationship so the bottom.
The light is the determining factor in the composition of the elevations, but also in definition of interior spaces, demarcated plans, score times, ensuring hierarchies involve matter and itself become matter.
Any formal investigation, the new batch was made to continue the already established premimssas even without twists or major overspending.
After the two projects are completely defined, it begins the process of project approval in 2003, otendo to leave in 2006, and ending construction in 2009.
How an irrevocable condition, we had 270,000 euros for the construction of each dwelling, with no possibility of deviations budget. It happened a materials management, together with the simplification of design, which was sustained in pincípio less is more absolutely harmonized with the project concept.
The cost per square meter was below 900 euros. The buildings are constructed in two years, white concrete, with parquet floors and marble from Riga in the bathrooms, where most of the furnishings were incorporated into the architecture, with a budget crushed.
The end result satisfies us as architects, to be a reflection of our professional integrity, though, during the process of building the clients lot 12, have objected to our monitoring.

1 + 1 = 1 ( Canidelo House) by Joao Laranja Queiros in Portugal won the WA Award Cycle 10. Please find below the WA Award poster for this project. 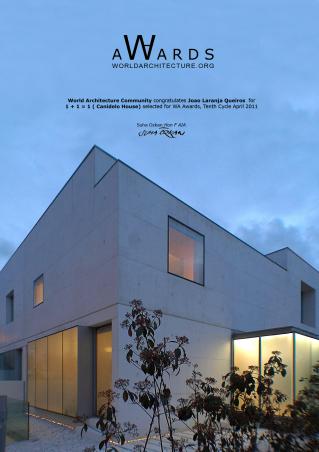