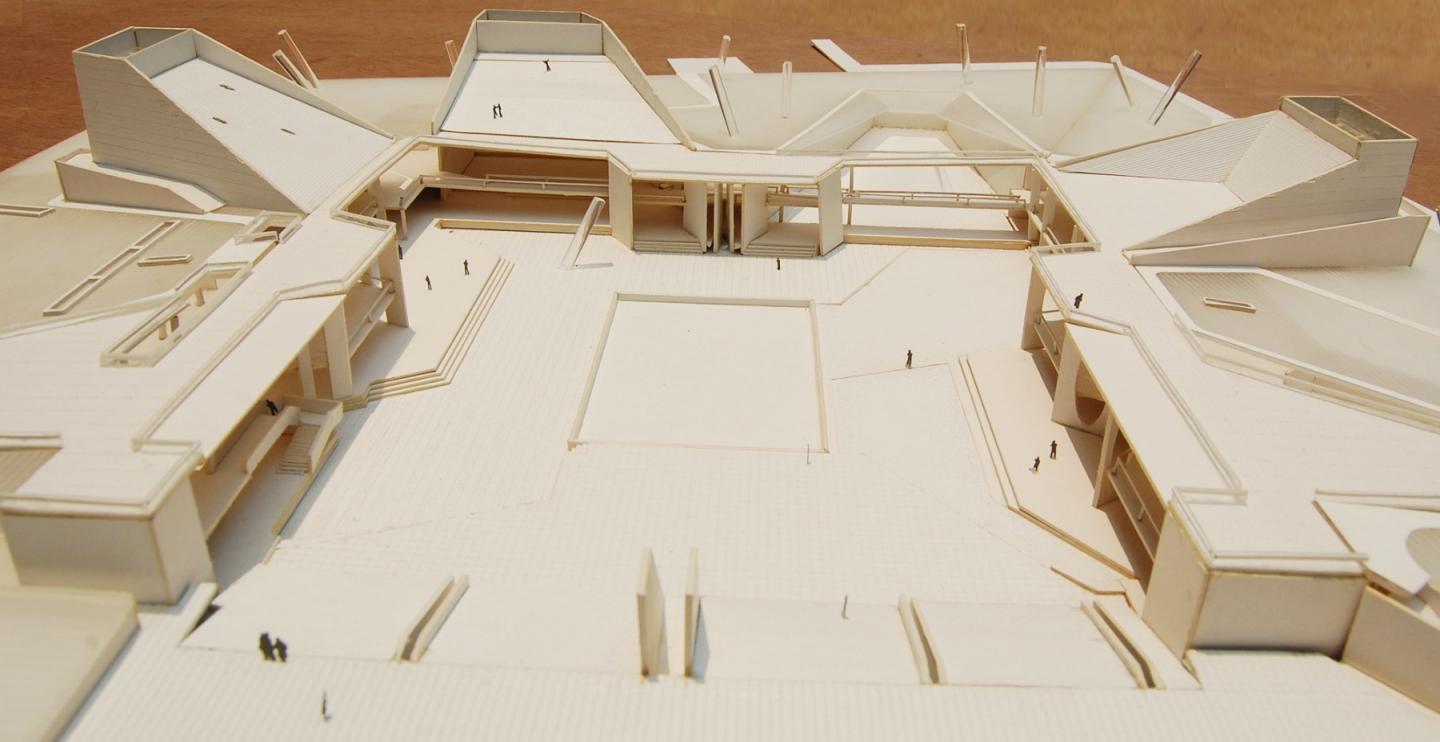 How can an architecture centre shape people’s behaviour? How can a platform generate spontaneous public activity? How can a built environment become a social hub? Such questions propel the impetus to the initial concept. Designing a centre for people should have such spatial quality, which leverages individual participation as a social being and promotes collective engagements.

The site is near to the Louis I Kahn’s Assembly Hall. The design attempts to invite people from all social stratum, and the intention is to avoid the physical appearance of monumentality and dominance. The underlying design concept is to create an inviting elevation to allow people from all sides of the land, as a concept to break boundary of social class differences in a struggling society like Bangladesh. The central courtyard with a central water body holds a solemn consolation. The annexation of large hall shape alcoves generates different activities like exhibition, concert and group gathering or events like protesting procession and demonstration. One archive, three seminar rooms and one café have provided with control guidance.

The design spaces have the hegemonic character to promote freedom of public participation. Trees have taken as symbolic parts of society. Three trees have been put in a distinct location to hold its unique identical connotation as shelters and symbolic landmarks. Contemplating spaces have high capability to convince human psychology. The drama of light and shadow offers alternative usages of the areas, which eventually transform spaces to places. The meditative quality also enables the quality of contemplating. Such spaces enhance the spontaneity of people’s participation. The celebration of the common and collective sharing shape towards a thriving society. The grandness and overwhelming inviting entry can be felt at the beginning but not any horrified way rather than with solemn and general invitation. The materiality has been considered as so close to human. Massive concrete has been used to sustain and to promote the feeling of closeness, as flashy material stands like showy and create a sense of social segregation to the poor.

This is a highly speculative and hypothetical project. The idea is to design a centre which can initiate a futuristic concept to form a better society. Participating, sharing, learning, listening and contemplating all are necessary to build a healthy community, to enrich human values and to promote culture.

The site has been chosen the existing army museum which is located in the heart of the city. The museum is now in a vulnerable condition on its existing. To exaggerate its relocating i have chosen this site near the Luies I Kahns master piece, our national assembly hall at Sherabangla nagar in Dhaka.