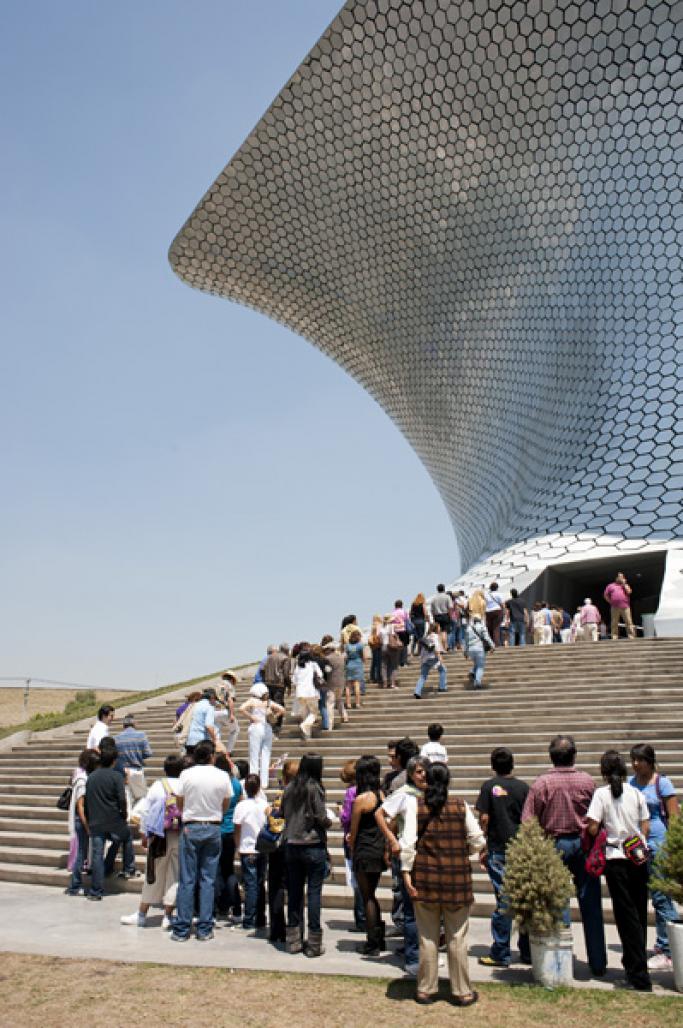 Museum buildings tend to be conceived either for
maximum functionality, acting as basically boxes or
containers for art, or as iconic structures that represent
a city at a particular historic moment. The
Museo Soumaya was designed as both: a sculptural
building that is unique and contemporary, yet one
able to house a collection of international paintings,
sculptures, and decorative objects dating from the
fourteenth century to the present.
From the outside, the building is an amorphous
shape that is perceived differently from every
angle, while reflecting the diversity of the collection
on the inside. The building’s distinctive façade is
made of hexagonal aluminum modules facilitating
its preservation and durability. The shell is constructed
with steel columns of different diameters,
each with its own geometry and shape, creating nonlinear
circulation paths for the visitor. The building
encompasses 6,000 square meters of exhibition space
divided among five floors, as well as an auditorium, a
café, offices, a gift shop, a multipurpose lobby, and
storage space. The top floor is the largest space in the
museum, with its roof is suspended from a cantilever
that allows in natural daylight.

To create a shelter for collections, the opaque façade is made of hexagonal aluminum modules that minimize exterior openings while optimizing the preservation and durability of the entire building. The conglomeration of the individual modules reflects the diversity of the museums’ collection; including the worlds’ second largest collection of Rodin sculptures, a wing of Medieval and Renaissance Art, and a gallery of Impressionism. This heterogeneous collection is housed in a continuous 6,000m2 exhibition space spread over six levels. The building also includes an array of public and private programs, including: a 350 seat auditorium, library, restaurant, gift-shop, a multi-purpose lounge, and administrative offices. Connecting the programs is a non-linear circulation zone, creating a zone of interaction that’s connects the users along a common path as they meander through the building, culminating in a naturally lit multi-use gallery on the top floor. The shell of the building is constructed with 28 unique curved steel columns of varying thicknesses, geometry, and shape. Stabilizing the structure is a system of seven rings that are located on each floor.