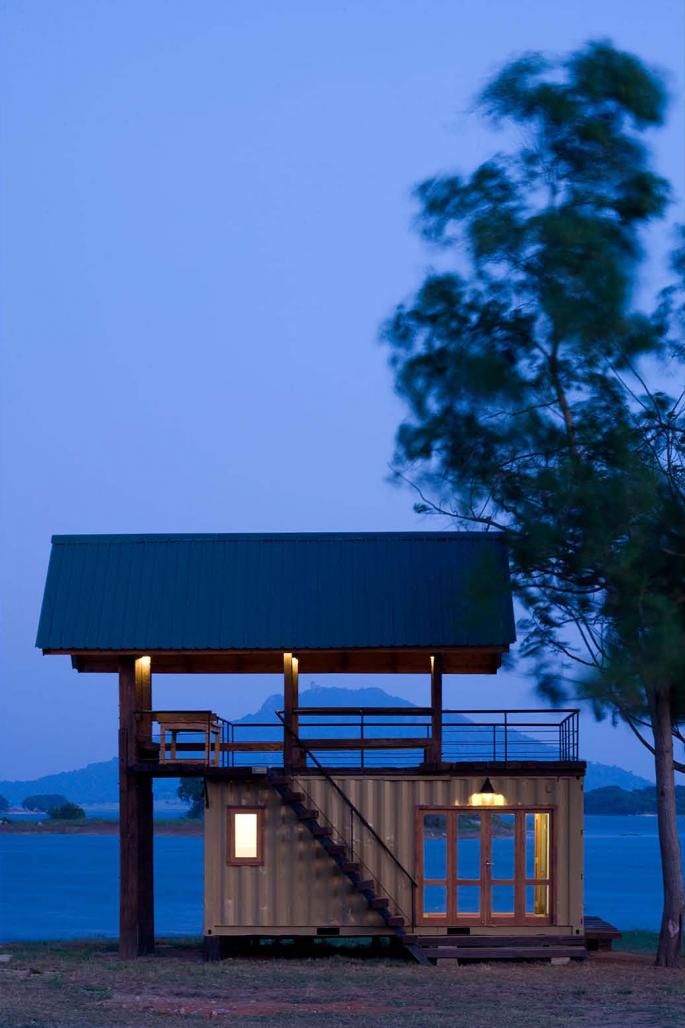 The Sri Lankan army has gone through the rigors of the armed conflict, which prevailed in the northern and eastern provinces of the country for more than 30 years. While the architect & the client were having a discussion near the lake front, on the renovation of a building in the Maduru Oya camp, the client did not forget to talk about the tranquility of the surrounding s. The discussion took place in an idealist setting, endorsing the need to enhance this character architecturally, to create a place, a holiday cabana, for relaxation with the lake front for army officers to help them forget their dreadful memories and experiences at the battlefield, even in a smaller way and to spend some time with their families in a serene and calm setting. There were some container boxes abandoned after the war. They were lying close by, without being made use of. The container boxes with their enormous interior space provided the architect an excellent opportunity to design a setting, using them as part of the created space.

The key requirements of the client, being an army officer was to build a place for relaxation of the army officers during their holidays,, after their rigorous duties at the battle front, enjoying the serene environs of the maduru oya and the picturesque mountains in the backdrop. The use of abandoned container boxes, old railway sleepers, timber strips from weapon boxes and the employment of the labor of soldiers, have contributed heavily to the efficient re-use of resources available at site. With large windows on either side allowing sunlight to seep through, the amply shaded cabana is cooled by cross ventilation, thus minimizing the use of electricity, which is costly.

Wrapped in beautiful environment, Maduru Oya Holiday Cabana has become a retreat of tranquility to the traveler seeking solace in nature. The Holiday Cabana effectively captures a panoramic view of the rugged wilderness as well as the picturesque setting of Maduru Oya and the blue mountains beyond. The landscaping concept was not to add any alien elements, but to avoid any undue damage to the serene natural surroundings, which was achieved by placing the cabana on an elevated platform, allowing the visitor to enjoy the nature.

Visual expression and fitness of form are two essential qualities of all good architecture and planning and these are also central to sustainable construction. The site is a portion of a vast expanse of state owned virgin land with no built structures in the immediate vicinity, facing a very quietly flowing river ( Maduru Oya). Hence references in designing could be made mainly to the envisaged function of the building and the character of the intended space, while maintaining a deep respect for the serene natural settings.

The significance of the project lies in its sensitivity to its natural landscape. It is important architecturally for it represents the future of Sri Lankan architecture socially, culturally, economically and technically. The architecture also represents the transformation from war to serenity. Earlier the site was a scene of war and fear, but the materials left behind have been utilized to create a piece of architecture which allows one to forget the past and enjoy the peace and tranquility of nature.

Project area is1050 Sq.ft, Site area is approximately 2 acres
Two containers positioned next to each other on a foundation made of concrete logs, became the main lodging area with a timber deck placed on top, extending towards the lake.
The container boxes lying idle, provided sufficient interior space and timber strips taken from weapon boxes, railway sleepers and iron rods, became ideal raw material for the design to take form. The interior and furniture are built of timber that was formerly used for Army bunkers. Only steel glass and roofing material were locally purchased.
It is a semi two-storey cabana, the ground floor accommodates a large bedroom, toilet, kitchen, living area and a deck connected to a small pier. The sheltered upper deck is accessible via the stairs placed on the outside.
Estimated cost of Design stage (actual material cost) ; 15000 US $ (2009)
Actual cost of construction the project; 3000 US $ (2010)