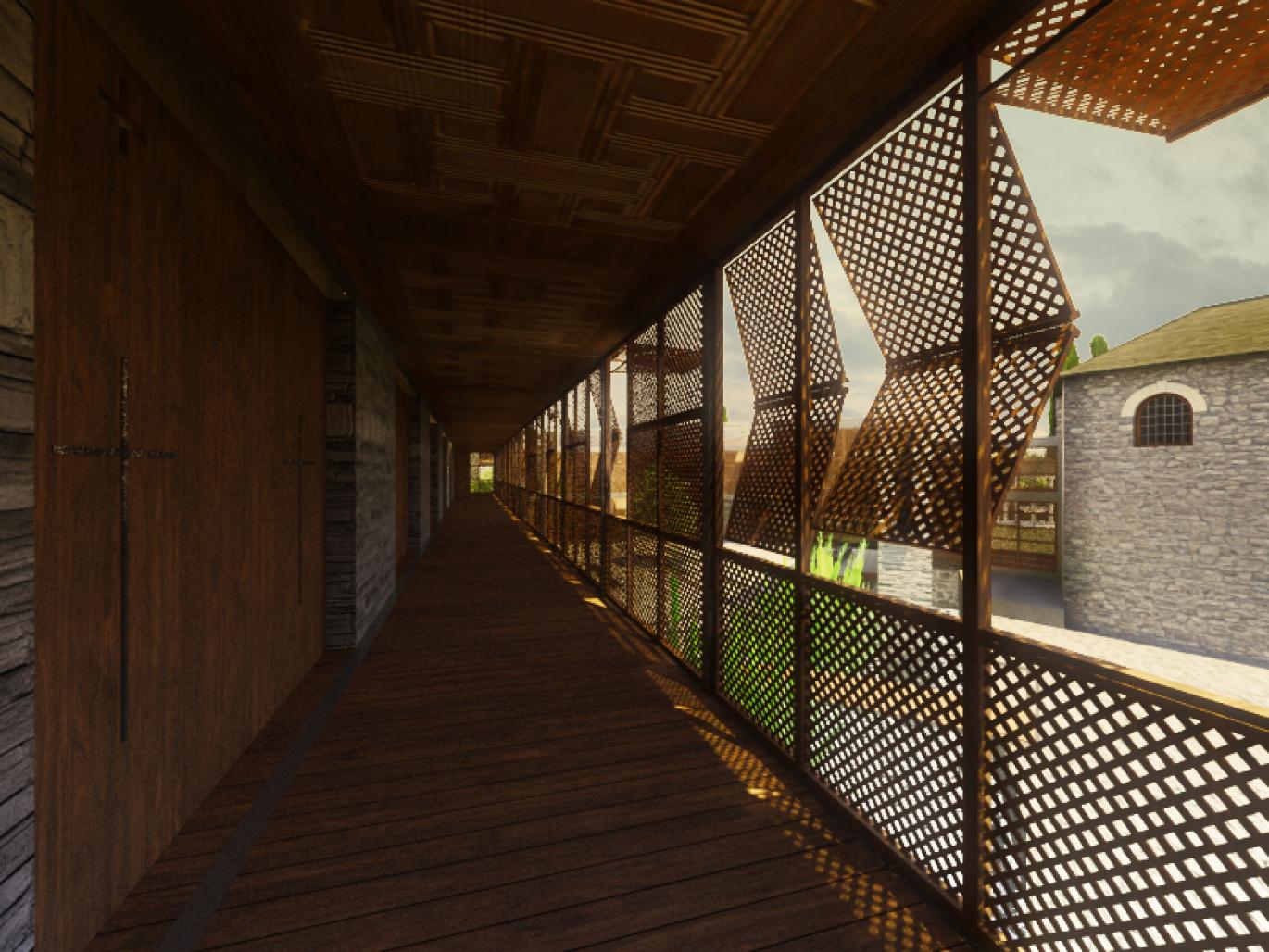 The extension of a Byzantine Monastery in Northwestern Greece

The challenge of this project is to create an extension of an orthodox monastery, a “new part”, which would be architecturally independent and presenting a contemporary architectural language, while remaining in an organic relationship with the “old part”. The extension has to deal with the fact that the old complex and the surrounding area belongs to the national heritage monument list, adopting an architectural language which is easily understandable and related in philosophical level with its religious identity and function.
The whole area is characterised by long-low walls which support different levels of the ground, designated fields and creative formal deviations for brooks. Thus, the extension started to take shape, based on the idea of using walls as the engravings of possible structures and landscapes. Also, the decision of placing the new part on the exterior of the old shapes, helps it to be independent but also clarifies some issues on use and philosophy.
Dividing the complex in the north (extension) and south (old part) areas, we can distinguish the private part (areas which belong to everyday life of the monks – forbidden to visitors) and the public part (areas which belong to the visitors and pilgrims). From the division between the east and west, we can distinguish the spiritual/human part. The eastern division is the spiritual one (also connecting with principles of Christianity about the East as the cradle of the religion) and contains the church, open-space for prayer, underground new buildings for confession, a small new church and the residence of the abbot. The western, human part contains the cells of the monks, a dining room, a room that serves the guests, a small book shop, a small medical room, crafts workshops and some storage areas.
The landscape was a fundamental issue of this extension. The synthesis is using the buildings parts in total integration with the nature. The ground has been used as a cloak which is binding the structures with the nature and the water retains creative spaces of different elements, which contrast to the strict building environment.
In addition, the extension will be constructed using a combination of contemporary and local traditional building techniques. The majority of new structures have lower height than the old buildings, in order to aid the monumental part to be recognised immediately. The combination of using earth architecture techniques with some contemporary building approaches (planted facades, recycling of water, geothermal applications energy safety, increased passive thermodynamic profile of the buildings) creates a green building, both structural and maintenance-wise.

The extension of a Byzantine Monastery in Northwestern Greece by C.Chaitas, N. Koutsoumalis, A.Perela in Greece won the WA Award Cycle 11. Please find below the WA Award poster for this project.