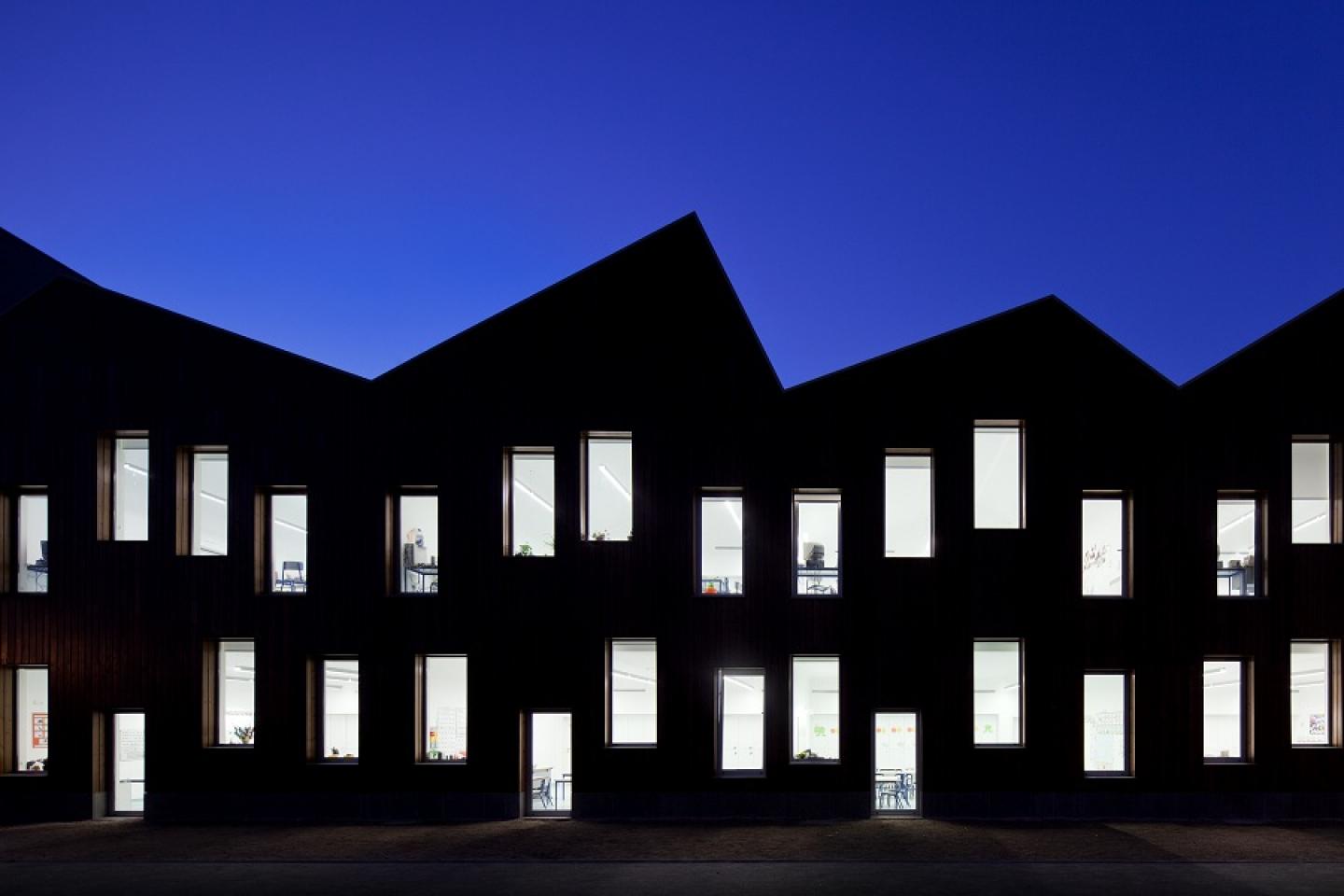 The school arises from an idea of scenery and, like a scenario, presents itself without rivaling with other complexities that time has created, without apparent logic but with a very present sense of life. That is why its design is linear, its spatiality is developed on the inside of a wood covered box that draws the horizon, organizing it.
It seems to recover the memories of the industrial buildings that populate this area and above all, the memory we keep of this council that is PAREDES.
With a stripped and rigorous appearance, the building is set by the sinuous roof, whose movement on the façade creates an illusion of an apparent city skyline. From the building, with a strong longitudinal form, two closed surfaces are highlighted, punctuated by the apparently disorganized repetition of the same window. And so, window frames dance along the side façades creating a vibrant rhythm that contrasts to the open ends, with large windows.
A rigorous metric was the base of the interior design, resulting in regular and orthogonal spaces where the unleveled windows stand out, creating games of light, and invigorating the spaces. The classroom, this way, gains a new dimension, no longer being an austere and inflexible space, and becoming a space of creativity and imagination, that is intended to be versatile and above all multipurpose. The movement created by the roof extends to the interior, invading the spaces with its language materialized through different levels and very different ceiling heights, always resulting in diversified and distinctive spaces.
In order to manage flux, divide paths and functions in regards to program, the school is developed in a simple and immediate manner with the primary school levels and common areas in the centre body, with the top ends housing the pre-school nucleus and the gymnasium. And so, there was a concern in distinguishing the tops from the rest of the building, giving them large glazed spaces, allowing for the pre-school and Gymnasium to extend to the outside.
Offering a singular language, that stands out from the scenery and other buildings, the intervention searches to harmonize the necessary aspects to conjugate the dynamics of each learning unit, allowing for a diverse spatial and educational experience, giving all the students the necessary tools for a good educational development. In the sense that space, architecture, also teaches us.

Mouriz School by Nuno Lacerda in Portugal won the WA Award Cycle 11. Please find below the WA Award poster for this project.