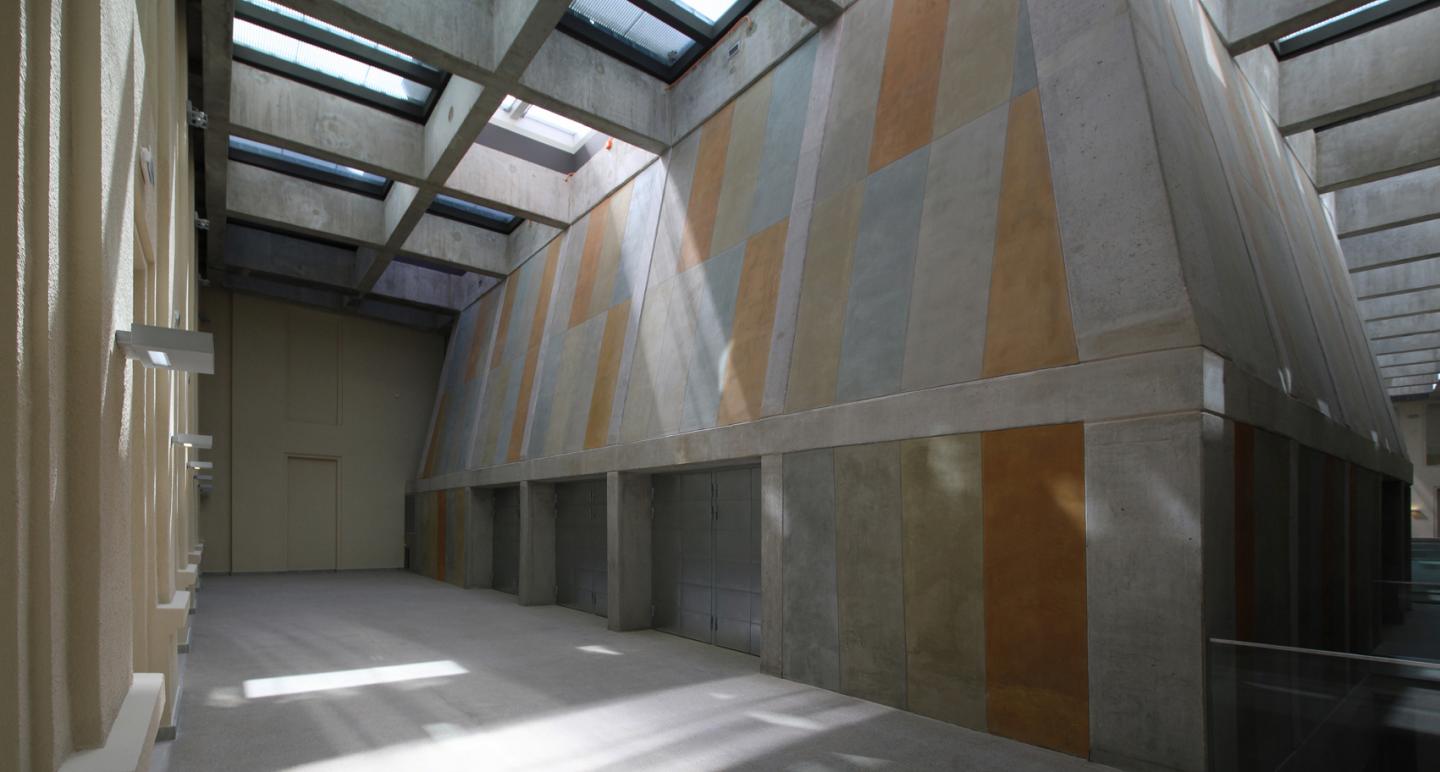 The building is situated in the historical city centre of Budapest, belonging to its world heritage area with a view of the Danube and the Buda Hills. It consists of two wings: building “A”, object of our design project, was standing empty for almost a decade and building “B” which was renovated in 2004 and is housing Sapientia College of Theology of Religious Orders currently.
The enclosing walls run along the border-lines of the building site. The passage under the bridges connecting building “A” and “B” leads you from one of the most popular pedestrian streets, called Váci street, towards the river Danube. Between the building and the Danube is March the 15th Square is located, hiding ancient and medieval archaelogical records. The square and its side-streets have been renovated recently a worthy environment for the citizens. The neighborning Inner City Parish Church with its gothic sactuary is the oldest catholic monument of Budapest – also under reconstruction at the time. Next to the church the Elizabeth Bridge is spanning the river. Looking back from over the bridge one can now enjoy a long-expected image. People start exploring the square and the streets around, the untapped values of the area. By lowering the parapet of the ground floor windows towards the square down to the pavement level, the house opens up for the citizens. As architects of the reconstruction our task has just as well been to create correspondence between building and its surroundings, which we have taken into consideration to the utmost.

It was founded by Joseph Calasanz in 1592 in Spain. They dedicate themselves to the education of the youth. Apart from Budapest their schools and friaries can be found in the bigger towns of the country. Originally they run boys’ schools, but nowdays mixed education is provided in several of them, as well. The order educated many great figures in Hungarian history, including István Széchenyi (politician, erector of the Chain Bridge, the “Greatest Hungarian”), Lóránd Eötvös (scientist), Péter Eszterházy (writer).

History of the building

The site has unique givens. It had of strategical importance of all times. In the Ancient times a Roman castrum was standing on the spot. In the Middle Ages and in the modern period it was the centre of Pest’s evolution, the old town hall and the market square were situated here. The Piarists took up their residence in the small building next to the town hall in the early 18th century. As time went by the teaching order grew and moved into the neighbouring bigger houses until they owned a whole group of buildings. At that time the square towards the Danube did not exist but was built up completely. Later they took possession of the famous Glöckersberg-Esterházy Palace. Many envied the Piarists their property in the most precious part of the city. Even Kaiser Joseph II tried to get hold of it but luckily he failed. In the early 20th century the boom generated real estate speculation in Pest. Almost the entire city was rebuilt to raise new and bigger houses. The present building complex of the Piarists was designed by the architect Dezso Hültl at that time and was constructed during the First World War between 1914 and 1917. Originally building “A” served as school and building “B” as friary. The ground floor and the first floor gave place for shops for rent, indicating the former use of the market square and covering the high maintenance costs of the buildings. The two-storey gym with its high-sill windows was placed in the wing towards the Danube, because of the town regulations planning to build up the square, which fortunately did not come true. The second floor housed the two-storey high Neo-baroque chapel. Above, the fourth floor was occupied by the terraced lecture rooms for natural sciences. Practically, all of the important rooms were situated in the Danube-wing. During the Second World War the house was hit by bombs, so that the roof of the Danube wing with the tower had to be demolished. Later in the course of the socialization Piarists had to leave the building and were moved to another one. The complex has accommodated different functions in the last decades, such as the Faculty of Liberal Arts of ELTE University. The great chapel served as a university stage, followed by ten years of emptiness. The space in front of the house was transformed into an archaeological park, but in a rather unfeasible way and has not been maintained either. It became an abandoned, empty place.

The Piarist Order decided to return to their roots in the City. The design task was to blend traditions with modern values, to enable the old building meet the demands of up-to-date education and facility management.
Functional layout of the building:

The Piarists had a classic school building in perimeter block with middle- and side-hallways. We placed each functional unit on a different floor and got a vertically layered arrangement due to the peculiar characteristics of the building.

Because of the inconvenient proportions of the inner courtyard, we built it up with the new functional units needed. The second floor became the piano nobile, where both the sports hall and the great chapel can be found. We placed the extension in the place of the former inner courtyard, including a multi-purpose hall on the ground floor and above a two-storey sports hall also to be used as an event hall. The body of the sports hall is a monolith growing from the earth, a symbol for the continuity of historical periods building on each other. The new structure is standing off the walls of the extant building, enabling natural light from above to reach the inner spaces, in the gap on the north side even to the main entrance on the ground floor. Around the sports hall we created a central assembly space. Chapel – sports hall and the assembly space on the second floor generate the horizontal axle of the building this way. At events of great significance you can open them into each other.

By covering the new sports hall and the assembly space a comfortable human scale school yard came into being on the fourth floor, which is unique in the city. The construction of the covering proved to be difficult task since it had to fulfill several funtions such as of a passable roof, lighting the sports hall and the assembly space from above, drainage and smoke venting.

The main entrance of the building is on Pesti Barnabás Street to reach the school and the friary. The existing grand staircase and back staircase have been renovated. All floors are accessible by the new elevators. Shops have their own entrances. The carriage gateway of the former courtyard became the separate entrance of the leased offices.

The chapel has undergone several conversions present day now. During the design process we reinterpreted its inner space. The walls received a homogeneous colour while the present ornaments have been preserved. We have reconverted the space of the old sanctuary to its bended shape and placed a big nave altar in front of it. The dark wood of the furniture stands out in the abstracted space. Lighting consits of a cloud-like arrangement of luminaires. Windows will receive glass panelling by an applied artist. The chapel has its own staircase and entrace from the street. The renovation of the chapel is due to start soon.

The floor scheme was changed in the Pesti Barnabás Street wing from the 2nd to the 5th floor: the former middle hallway was built up to a support area (including elevators, washrooms, shafts) and the former rooms towards the inner courtyard were merged to one big lobby for the students.

The changing rooms of the sports hall were placed on the first floor accessed by separate stairs. The school and friary library are situated on the first floor, too. Second, third and fourth floors are occupied by the secondary school with twelve classrooms, studios, lecture rooms and science laboratories. Monastic apartments and their public spaces (sitting room, dining room, little chapel) are on the fouth and fifth floor. Students’ canteen and kitchen were placed on the second floor, while monastic dining room and kitchen on the fifth floor. In the north wing of the fifth floor management offices of the Piarist Order were established. The number of Piarist monks has shown a tendency to decline year by year, accounting for the fifth and sixth floor in the Danube wing with the best view to be let as office spaces, thus contributing to the maintenance cost of the building. On the sixth floor you can find offices for rent in the Váci Street wing, the rest of the rooms contain machinery. Building „A” and „B” are connected on each storey from the second floor upstairs.

The original timber roof construction was modified due to the war damages. Now we had to pull it down completely because of the fire regulations. The form of the roof including the Danube wing destroyed by a bomb was reconstructed according to the original plans out of reinforced concrete. The tower on top of it received a new shape in order to indicate the change also in the exterior as a sign.

Floor and walls are covered with porcelaine tiles in the public spaces such as lobby and hallways. Classrooms received poured resin flooring and wood panelling, while monastic apartments are paved with parquet. The grand chapel and its foyer have stone flooring. The school yard received artificial stone and wood flooring with steel walking grids above the glass skylights to make them passable.

The original wooden box-type windows went wrong, they had to be replaced by custom-made thermally insulated windows of the same look. The shop-fronts were disassembled, as well, since they were not original. By the help of period photographs we managed to reconstruct them in their authentic form out of copper, but updated to today’s standards. The facade was recoloured. The roofing system is made from small lozenge-shaped tiles of titanium-zink. We took care to place the steel louvred roof superstructures needed by the ventilation machinery so that they cannot be seen from the streets. You can find expanded metal mesh cladding on several parts of the building, e. g. on the tower, in the inner courtyard on the sixth floor, on the garage entrance in Pesti Barnabás Street. The facade reconstruction included the whole building complex in order to look homogeneous.

We wanted to create a building which lives up to its place in the heart of Budapest, to attract people from different strata of society by the variety of functions, to have an educative effect by the quality of the task completed and to create also community. The construction itself needed a lot of endurance, team spirit and plenty of energy since the economic crisis has put the participants to test many times. We believe that the reconstrucion completed sets an example how to reinterpret a building in the spirit of modern times respecting the historical urban fabric.