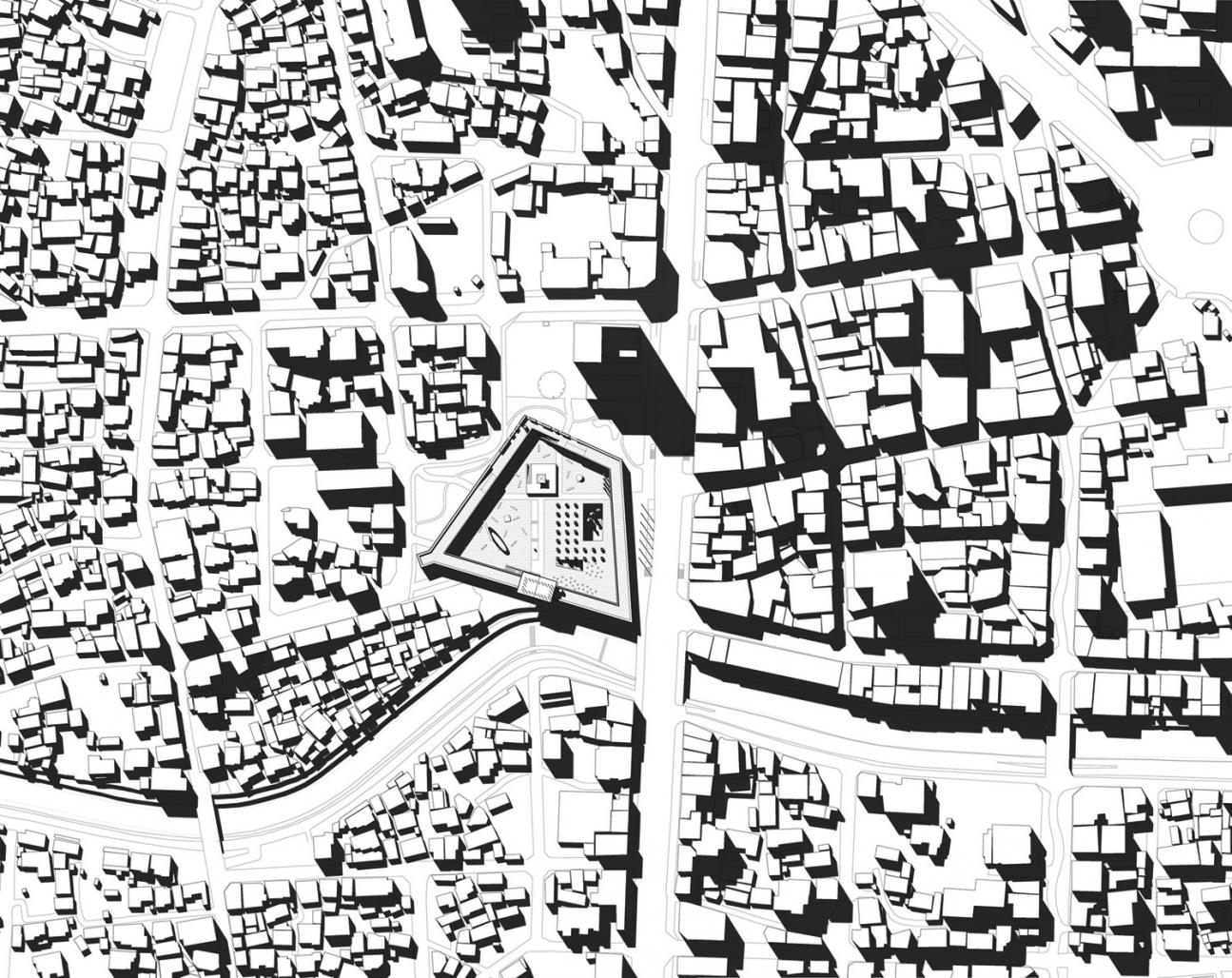 The city appears without any public places as important and representative urbanistic places but above all as identity places of socialization and aggregation, and places to stay.

In this block of Suncheon, the new art platform will be an emerging element, a new urban and social landmark. It will promote the process of city regeneration of Suncheon.

Its feature of landmark will be given not by its dimension, height or by special shape and materials, but by the clear legibility of its architectural structure into the surrounding urban texture.

The art platform, for the importance of its functional content and for its position (strategic and considerable in the history of the city), can be seen as the new cultural and symbolic center. It will be representative for the whole citizenship.
It will be capable of promoting cultural and social growth of Suncheon.

It isn’t, in fact, designed as one or more insulated buildings, but it is a public place, a plaza (now missing), It’s an urban space that will become the new identity city center.

It’s a 24 hours usable place, intimate and protected, where it’s possible to socialize and walk between the art works, where anyone can contemplate the sculptures, as in the ancient Italian squares.
The design process starts from the study of the history of the city. The idea, in fact, is a re-enactment of images that comes from memory.

The idea of public space becomes an architectural shape in which re- emerges, transfigured, the iconic presence of ancient, abstract and symbolic representations of the Korean cities and their genesis. The disappeared city reappears as Memory in its new cultural center.

The new art platform is a reinterpretation of the structure of the ancient Korean urban systems: the location inside the nature (near a river and enclosed within the mountains), the presence of thick, and low city walls, the axes and the gates on the cardinal points, the main buildings (that have a clear geometry and recognizable inside a chaotic urban texture).
Outside and around the heavy walls in stone materials there will be a green ring, with winding paths, a pond and many trees. The green area calls to mind the natural landscape. It is, at the same time, in connection with the fundamental natural element of the near river.

The new walls in stone enclose, protect and define the public space that is accessible by six pedestrian gates (with paths that link the internal “plaza” to the neighboring urban texture and to the river) and two passages for emergency vehicles.
With two large staircases and lifts is possible to walk and stay over the walls (with many benches and art installations).

From this point of view, it is possible to see simultaneously the city and the interior space of the “plaza”. At the end of this path, it will arrive in a pleasant place of the pavilion of the New Yeonja-Ru, which is in front of the river.

The walls, one-meter thickness, have been digged so they can include all required functions. The only two main functions (multi-purpose hall and exhibition area) are below the level of the “plaza”.

The administration area, the art works storage with its work space and the cafeteria are all contained within the thick walls in stone.

The large space totally enclosed inside the walls is a public “plaza”, comfortable and protected from the urban chaos, where it can stay or walk among art works or take a break for a coffee.

In this public and always open place, there are two existing monuments (Pal-ma-bi and Park Hang-Rae Memorial). The first one is inside a geometric pond with lotus flowers, while the second one is over the podium in concrete.

A wide and monumental staircase and an elevator connect the public “plaza” with the existing underground shopping center.

The solo two geometric elements that distinguish the two major functions are located near and long the two axes that cross the “plaza”.

The multipurpose room emerges from the underground with its plane roof that becomes the podium for the Pal-ma-bi.

The exhibition space shows themselves with the big void for the outdoor exhibitions and its skylights that dot the square, according to a geometric grid. The rooms for permanent and temporary exhibitions can host many exhibition typologies thanks to the use of movable panels.

The New Yeonja-Ru occupies a leading position on the south gate above the walls. Reinterpreting its archetypal form, it’s a light and non-occlusive structure in steel hovering on the river. Its slim columns support and retain the subtle cover in bird wing shape.

In addition to the two great stone staircases that start from the “plaza”, it is possible to reach this panoramic pavilion directly from the cafeteria, with a staircase and an elevator.

The building materials choices are local stone for the thick walls and the paths that cross the square, and the naked concrete for all the underground part of the art platform. To ensure the best visual continuity it has been chosen to utilize large windows without frames and with glass framework.