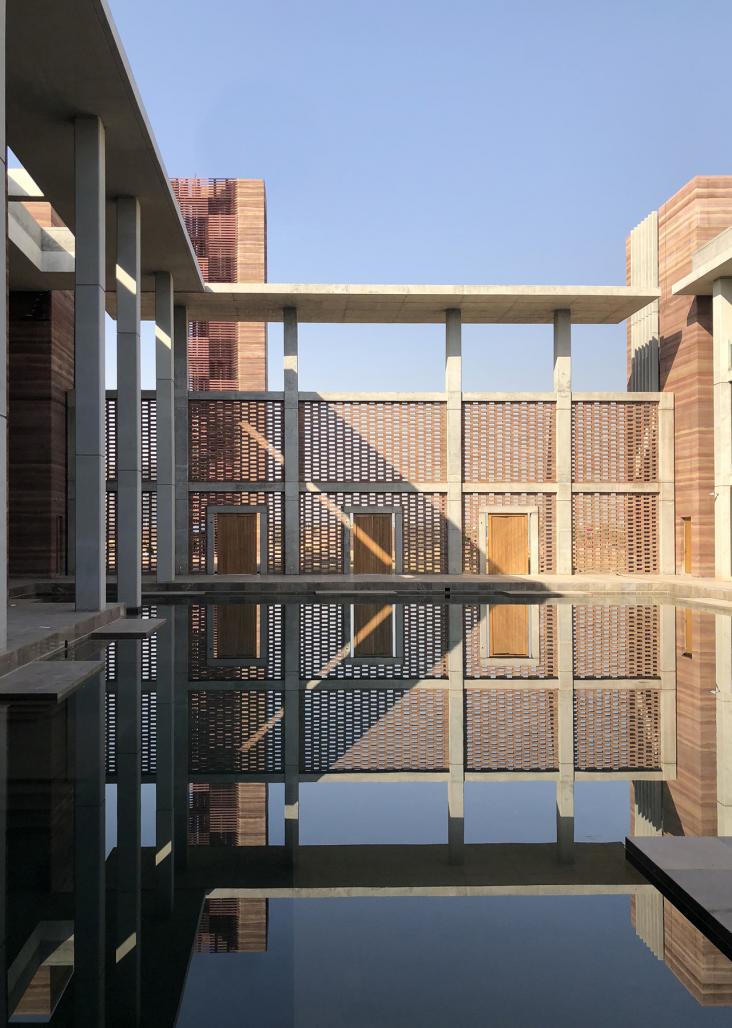 The Telenor Office creates a new work space paradigm, whose principles are based around Sustainability, Context, Land and Work place experience. The Campus has a distinct Architecture which is planned around stepwells; woven together through an internal street which changes in width and volume as it staggers around the complex. The material palette used on the façade creates a dialogue between the building, the contextual landscape and the surrounding urban fabric. The stabilized rammed earth walls strongly depict the natural hues of local soil. Local stone is used in the stepwell and screens which filter the harsh sun. A unique Communications Tower feature acts as a symbol a beacon to the development

Traditionally courts have always played an integral part in local architecture, be it residential, institutional or religious building types. These central spaces become the main socializing hubs for people. In the Telenor office this concept is used as a focal point, interconnecting blocks around large water bodies in the internal courts encourage social interaction between the users. Located in Islamabad, Pakistan, the site, for the Telenor office campus is made up of 15 acres of an undulating landscape which exemplifies the Potohar plateau. The design ensures that the site’s existing topography and natural water courses remain intact: for this, inspiration was sought from the historic stepwells of Pakistan’s Punjab province and western India, used as an architectural device for storing rainwater (Baolis).

Creating a home for the county’s second largest and fastest growing mobile service provider brought its own set of challenges. The architecture and the interior planning questions the strong hierarchical system ever present in the local corporate sector by introducing open plan work zones with shared social hubs. A key aspect of the conceptual planning has been the Telenor work place model where social, physical and technological interaction is encouraged in a variety of ways. The office campus is planned around the stepwells, woven together through an internal street which changes in width and volume as it staggers around the complex. The courts are integral to the street and work zones, where people can work, meet and eat. This same seamless flow of space exists between the street and the work zones; on all the various floor levels.

Conceptually the block orientation is kept in the North-South direction to minimize heat gain. In this regard, the thick insulated stabilized rammed earth flank walls have been placed to the east and west with minimum openings. The circulation corridors and meeting rooms overlook the central water bodies. The main street connects the work areas with meeting rooms, social zones, gym, kitchens, breakout spaces making it into the main zone of communal activity which lies between the outdoors stepwell area and the indoor work environments. All three zones weave in and out of each other providing multiple opportunities for work, interaction, collaboration and social activity.

The material palette used on the façade creates a dialogue between the building, the landscape in the context and the surrounding urban fabric. The expression of the materials is celebrated through the use of fair-faced concrete, rammed earth and local stone. The stabilized rammed earth walls strongly depict the natural hues of the Potohar Valley soil belonging to this area. The conversation continues in the internal courts with the use of local stone in the stepwell and ‘Jaali’ screens which filter the harsh summer sun