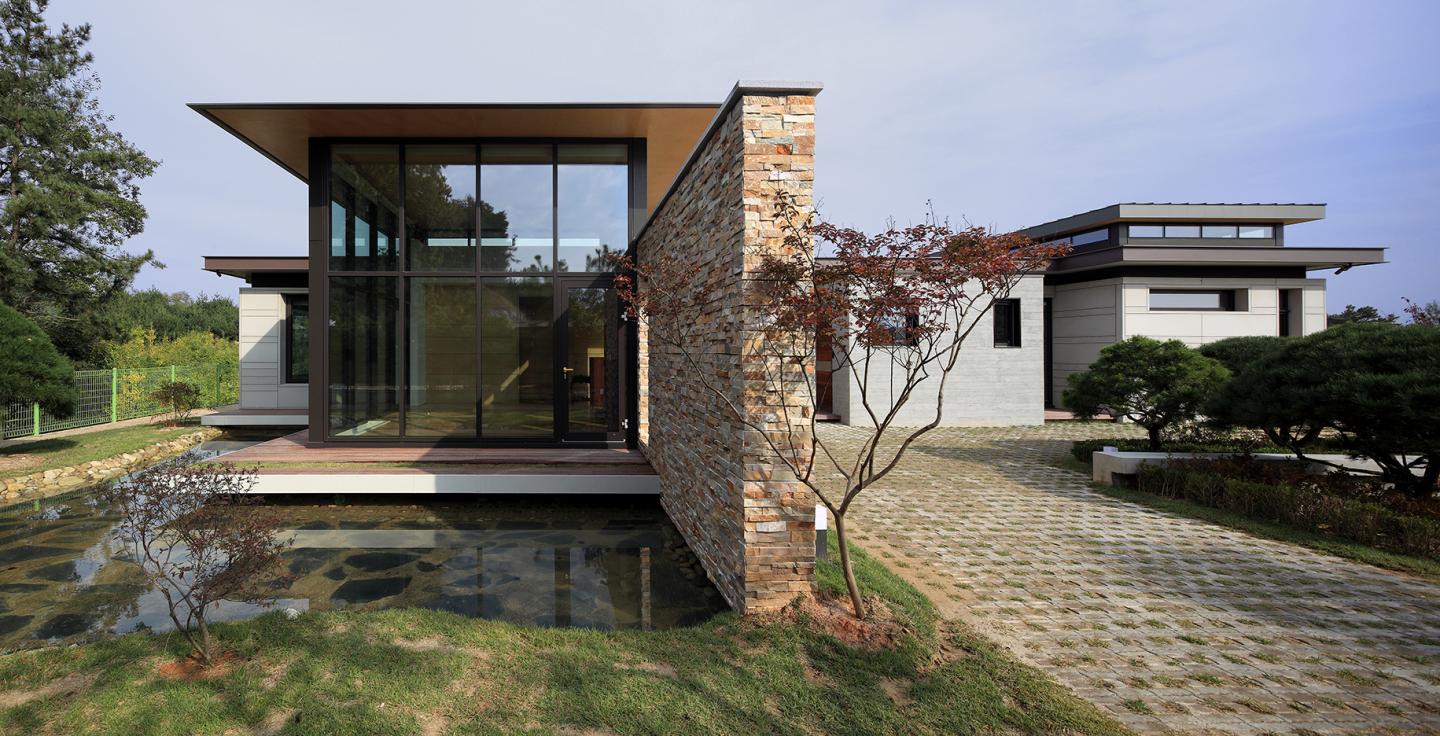 The House for Meditation and Healing

Envisioned as a tranquil space of healing and meditation, this detached house was constructed in Yeoju, one hour south of Seoul. A historically notable city, Yeoju was the birthplace of Korea’s last Empress, Myeongseong the Great, as well as the tomb of Sejong the Great, the most influential king in Korean history.

A number of positive property attributes may be noted; a densely forested hill to the west, beautiful ginkgo and pine trees pleasantly shading the property at the north, and a majestic eastern mountain landscape. Unfortunately, one aspect caused the client to seriously question the suitability of the property; the land to the south was significantly higher than the property and the stark contrast of elevations created conspicuous aesthetic dissonance.

Following the survey, however, the architect reassured the client, concluding that the site would synergistically support a place of meditation and healing. Moreover, due to the fact that the northern part of the property lie just beyond a nearby Restricted Development Area, it would also be possible to adjust the elevation of the land, bringing it into visual harmony with its surroundings.

The client, a sincere follower of Buddhism, sought to create a nourishing Elysium of natural beauty to spend their retirement years within this, our ‘mundane sphere of reality’.

The home has been divided in two by the Stone Wall. This literal and metaphoric membrane represents the conceptual partitioning of Jeongto from Yeto. Jeongto, the Buddhist concept of paradise, is represented in the home’s private space, while Yeto, the Buddhist concept of the mundane sphere of present reality, is symbolized in the public, gathering spaces. These two spaces are connected by a long hallway. These three elements represent the Buddhist’s journey; diligent meditation in the mundane sphere (Yeto), translation to and final arrival at a blissful paradise (Jeongto).

With simple broad eaves, skirted by a pond and nestled against a forested hill, the Tea Ceremony Hall is a living space that is both tranquil and welcoming. The other significant aspect of this building, the room for Prayer and Meditation, obstructs sunlight from the south, allowing instead, a diffuse, indirect ray of light to reach meditators via a long narrow story, facilitating concentration. This healing room was designed with hundred-year-old hardwood panel covering one wall, viewable through fixed glass, providing a primitive natural experience, conducive to meditation.

The singular challenge of designing a detached house is a unique invitation to discern the essence of another. As we continually endeavor to distill the values, beliefs, and truth of an individual, we eventually unearth a gem of understanding; a profound opportunity to manifest a perfected expression of the human mind. This, I believe, is an architect’s most solemn duty and deepest joy.

The House for Meditation and Healing by Hankook Architects, KACI International in Korea, South won the WA Award Cycle 24. Please find below the WA Award poster for this project.