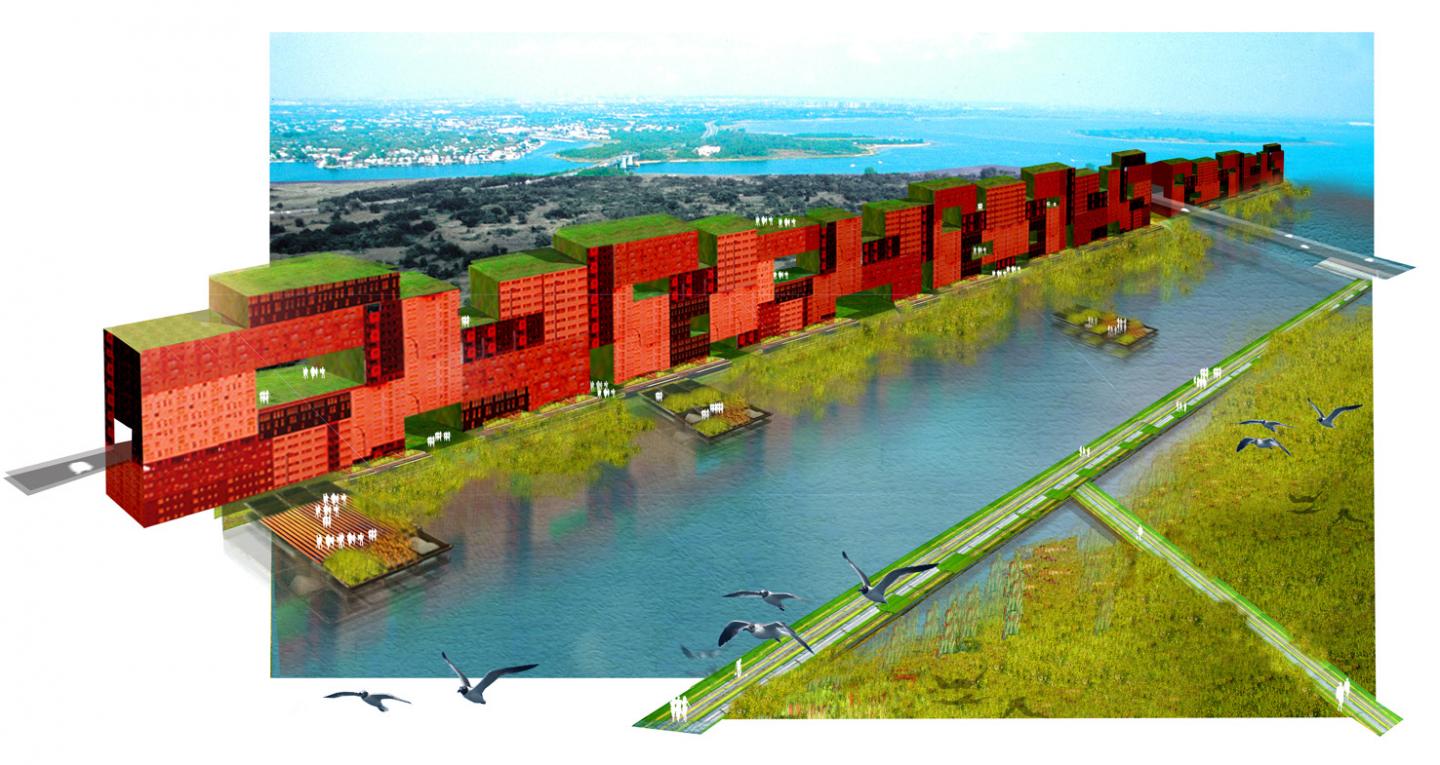 Nature and urban life should co-exist, each support the other. Preservation of natural habitat should intertwine with urban strings, so both can benefit from a symbiotic relationship. Future natural disasters should be managed by urban factors, and urban life should co-exist with nature. Therefore, our goal is to create a new hybrid model between natural and urban bodies. This model is created to manage future conditions. Water becomes the key element of nature and dissolves in the life patterns of today and future as also these patterns dissolve in water.

The area is selected with great concern due to its importance when thinking about water. Jamaica Bay region as a part of the Gateway National Recreational Area is mainly under risk due to conditions which are directly bound to water. The national park is loosing its wetland islands due to improper flushing of the bay which is caused by the landfill of Floyd Bennett Field. The water in the bay and also the region cannot be cleaned by the wetlands due to this reason. In addition, the are is under great risk of floods and hurricanes which sea-level rise would potentially cause in the following years. An area bound this much to water deserves to attract attention to inspire new ones around the world.

UrbaNature project takes the condition by phasing its solutions. As phase one, wetland islands are surrounded with gabions which allow them to accumulate sediments which help them recover. These gabions turn out to be stands for attached floating houses and also research centers and public buildings, all floating in the next phase. At phase one in order to improve the condition of the wetlands the excavation of Floyd Bennett Field is planned and new housing units are designed as the vision of this proposed integrated life and advertised greatly around the country to be sold to provide funds for the rest of the project. At the second phase the excavation of the field starts which not only helps flushing of the bay but also increases the edges that urban life interacts with water, namely nature. The area becomes the image of the new vision with its canalled lands with green buildings. At this stage the canals which would start transforming the already existing rigid urban fabric start to be planned. The canals with the water plazas as nodes on them become fingers of nature carving into the city to ease the interaction with urban and nature. They are planned not only to add more edges of interaction but also to serve as networks which strengthen the city. They would serve for transportation and also filtering for combined sever overflows in addition for being collectors for stream-water. They also help to manage the sea-level rise within the bay area by directing the water to desired directions. Therefore at phase 2 people living in houses on the planned canal routes start to be relocated to the apartments provided for them in Floyd Bennett Field. At the last phase total integration between nature and urban life is expected. Water becomes a surface of urban pattern and urban needs water to live. Therefore public health is improved due to additional recreational areas as well as the urban health.

UrbaNature project shows the strength, value and potentials of water to today’s world communities. It reminds us that water is not something we drink to live but also something we should respect to make our world live as a whole.