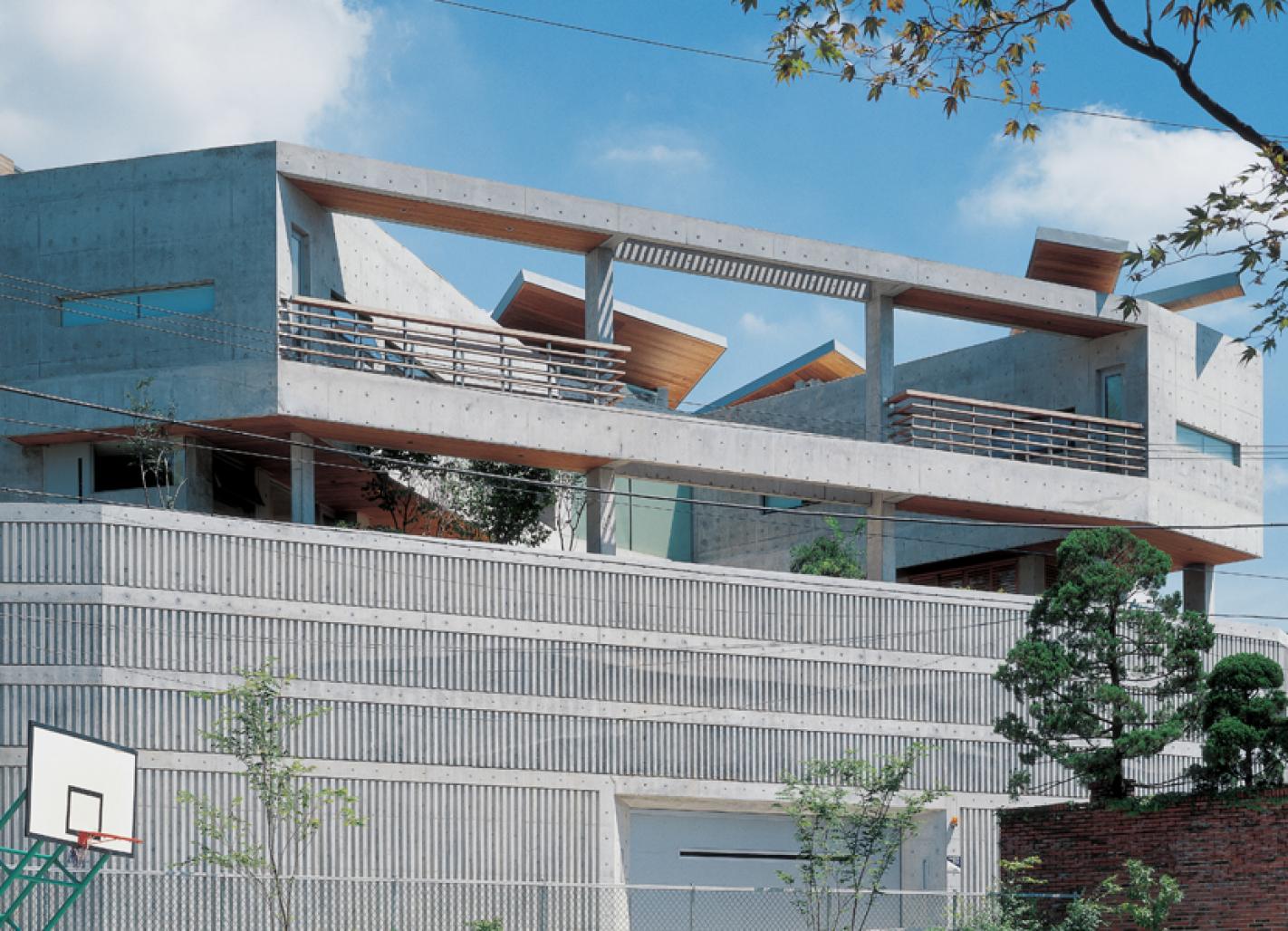 The site faces the two roads and there exists some difference of altitude.
There are mountains by the front and rear side as a nature and view. The view of the front side that is the north side is clearing up, so the urban landscape of downtown Seoul is seen. Therefore, the site has a condition that the harmonized fine view with good direction. The form of site was very irregular triangular, but it preferably became a good character of the house later on.
The client couple, who are a fashion designer and a businessman, suggested to construct both the outside and inside of the house with exposed concrete. The professional selection of amateur surprised me at heart. It seemed that the affection to the modern simple beauty already got into them as an important insight.
As always, many part of the design was decided by such site condition and client`s requirement. Finally, it reached conclusion to float an empty triangular shape concrete ring` which is similar to the form of site, on the high concrete axis. The form is decided by the aimed elements of design, such as `inflow of panoramic view`, `formation of `comportable garden ` , `keep privacy`. The two sides among the three side of the triangular site which faces adjacent site, are filled with mass. That is, centering around the living room, dining room on the first floor, pavilion, master`s bedroom on the second floor and children`s room become wings of both sides on each floor. By interrupting the visual interchange with adjacent house, the shape keeps privacy. The surplus side on the south side with fine view on the front road is intended to use as a floor of the bedrooms in both sides on the second floor, so the triangular ring was completed. A `picture` of last side of the floor is being a decisive `picture` that complete the character spatially/formatively. It softly surrounds the inner court, so characterize the space sense. Moreover, it operates as a pictorial frame that put a landscape. By expressing the own picture that translated the outside nature, the people inside could taste the preciousness of life, as well as, it will be a windpipe that bring the outside into inside. In addition, it adapts to around the front roadside formatively. The composed triangular ring shows strong power by itself, and it is expected to balance between the nature and power in sympathy with geographical features of mountain and altitude nearby.
The effort, to take a view of natural landscape on the back/side with the inflow of perspective through the concrete frame of the floor, forced to make high window with roof. The butterfly shape window put the natural landscape, so it became a device for the expression of them. Also, it operates as a strong formative element that composing the exterior of the house.