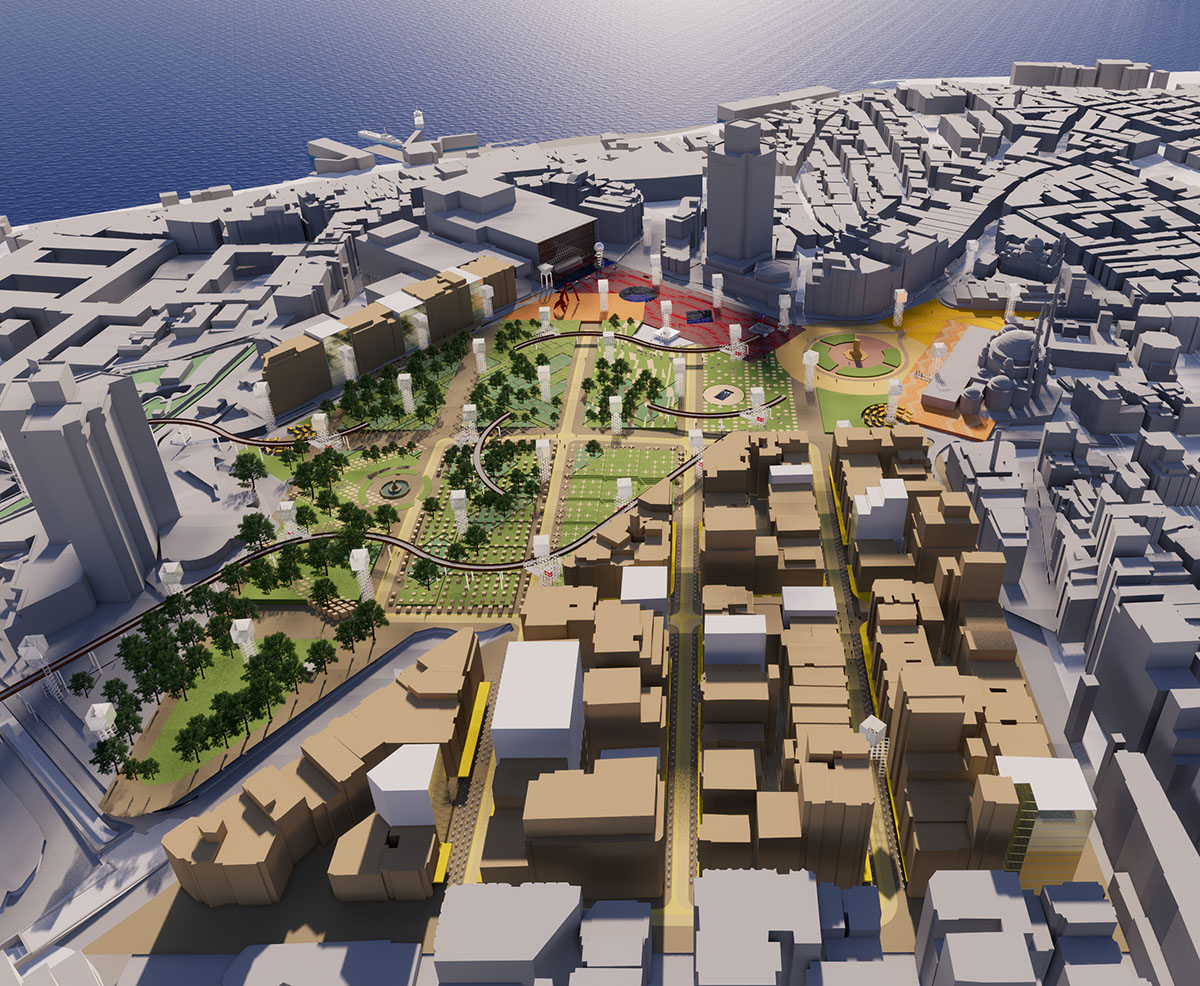 Building Office has released its proposal for the Taksim Urban Design Competition, which was held in May 2020. Building Office's design scheme was one of 146 entries submitted to the competition.

The aim of the competition was to "develop solutions for the problems at one of the major public spaces of Istanbul."

Taksim has a socially and politically different meaning in urban design, Taksim was invaded by a large number of protests in May, 2013 as a reaction to the urban development plans of the Turkish Government for Taksim Gezi Park.

Building Office's design proposed a plan, a framework for immediate problems that can be realistically done and does not require unrealistic political power to bring into real life. Building Office elaborates its design proposal from the historical point of the project with its own words. 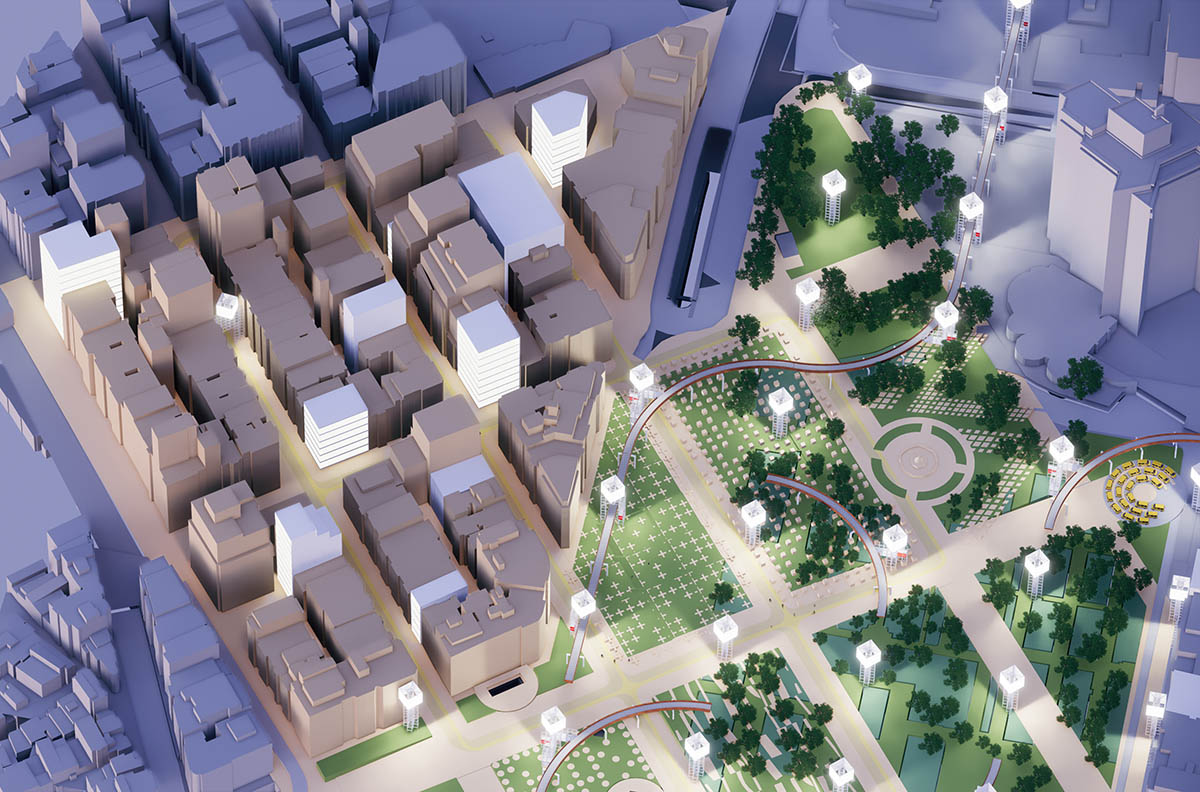 "The construction of the underground tunnel for vehicles from Tarlabasi to Sisli has just finished a few years ago, even though it is not ideal for pedestrian experience entering Taksim and increases the space in addition to the existing undefined space, we think it is a step taken that can have it’s own advantages," said Building Office.

"Taksim Square has been going through transformations since the beginning of the 20th century. We strongly believe there is no ultimate solution one can reach to fix Taksim." 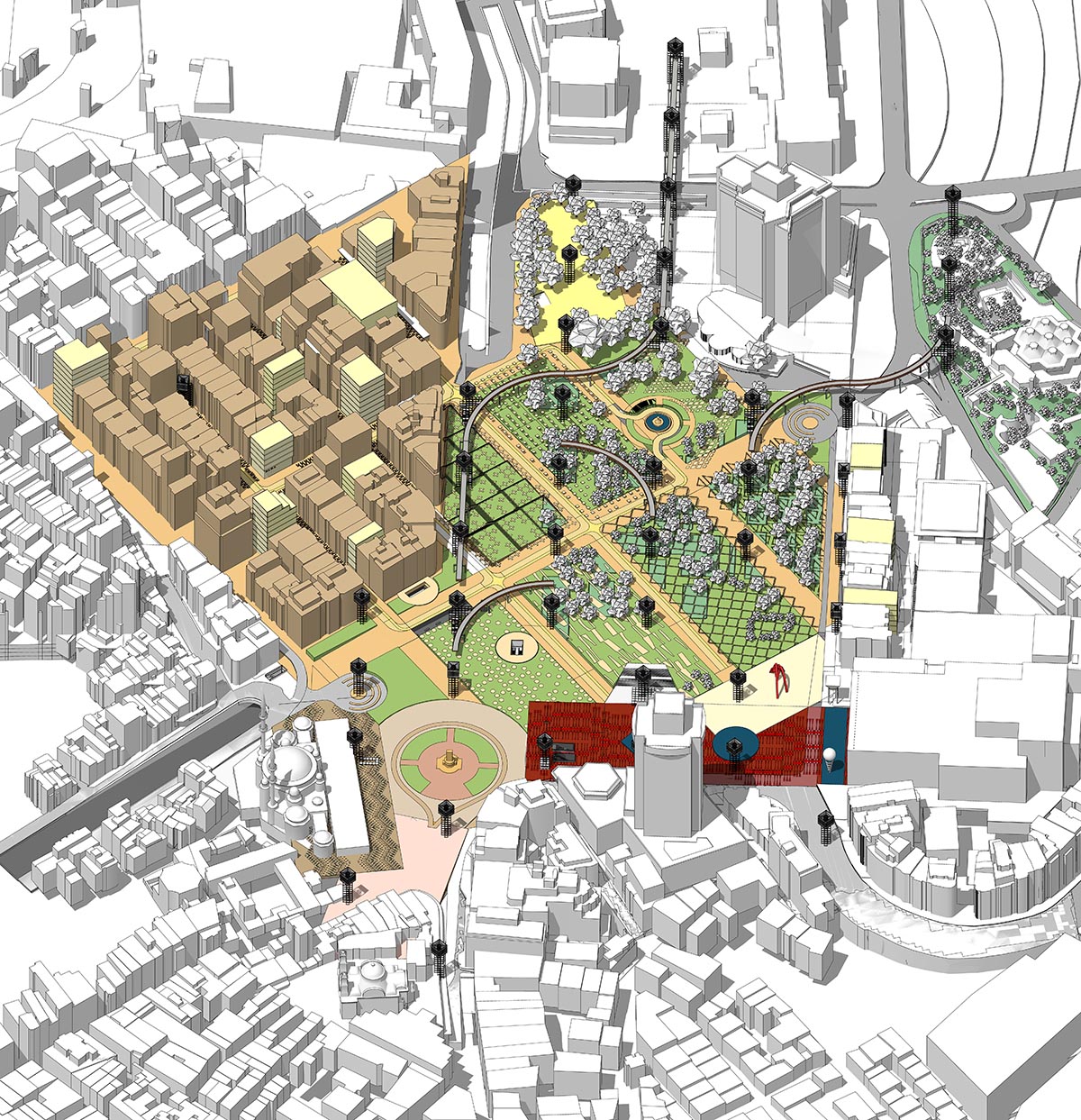 "It is simply not the way we see the nature of design and the role of the architect, the urban planner, landscape designer. At the moment, we are experiencing odd artifacts from the previous planning decisions taken. We can observe and experience these as people living in Istanbul."

"Istanbul has a very strong topographical character. Taksim square is a plateau at +85m sea level, located on the ridge formed by great topographical change - this path is called Tarlabasi Caddesi, Halaskargazi Street, and Buyukdere Caddesi, reaching 14km north till Haciosman. On this spine, Taksim serves as a hub almost as crucial as Mecidiyekoy and Levent," added the office. 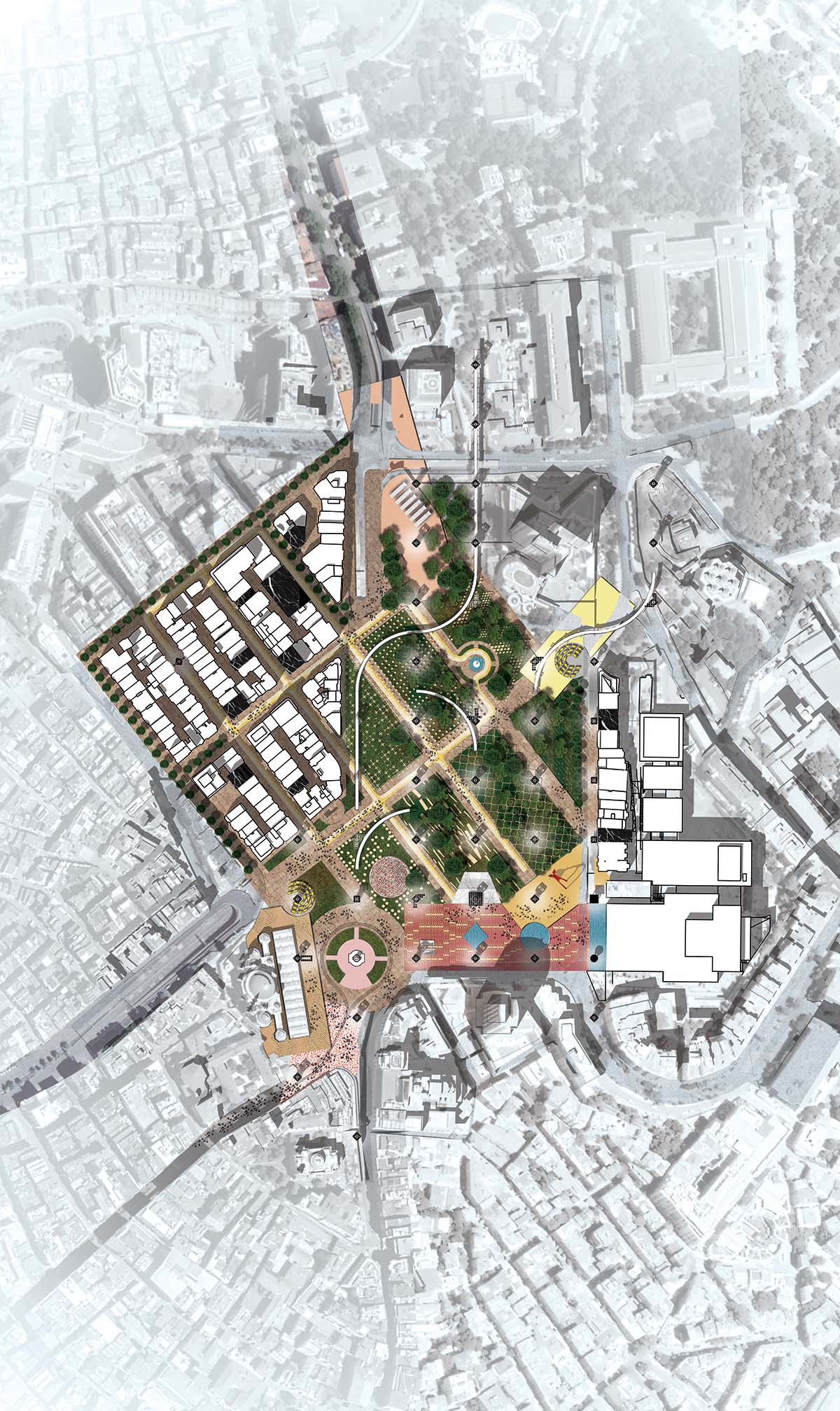 "Yet, we believe Taksim is no longer the most crucial transportation hub in the city"

The city has had a trend of migrating with consumption - not because of maximized capacity - towards north starting in the 20th century. Starting from the Ottoman Palace migrating from Topkapi to Dolmabahce, there has been a historical trend to migrate towards the north of Istanbul. This trend was followed by the business district of Karakoy moving to Mecidiyekoy, later to Maslak.

IBB’s new office was considered in Maslak, Galatasaray’s Stadium moved from Taksim Square to Mecidiyekoy; later to Seyrantepe, United States Consulate moved to North to Istinye from historical Istanbul, bank headquarters moved from Karakoy to 4.Levent, even the main airport moved to North in 2019.

Taksim Square has gotten weaker as a business center of Istanbul as a result of this migration, yet Taksim has always managed to preserve its socio-political meaning. In the 21st century, the government defined Taksim Square as trouble making public space where protests are made often on the 1st of May; often, shops were vandalized every year as a result of the tension. The gatherings, demonstrations were banned in Taksim on almost every meaningful day, including New Year’s Day. 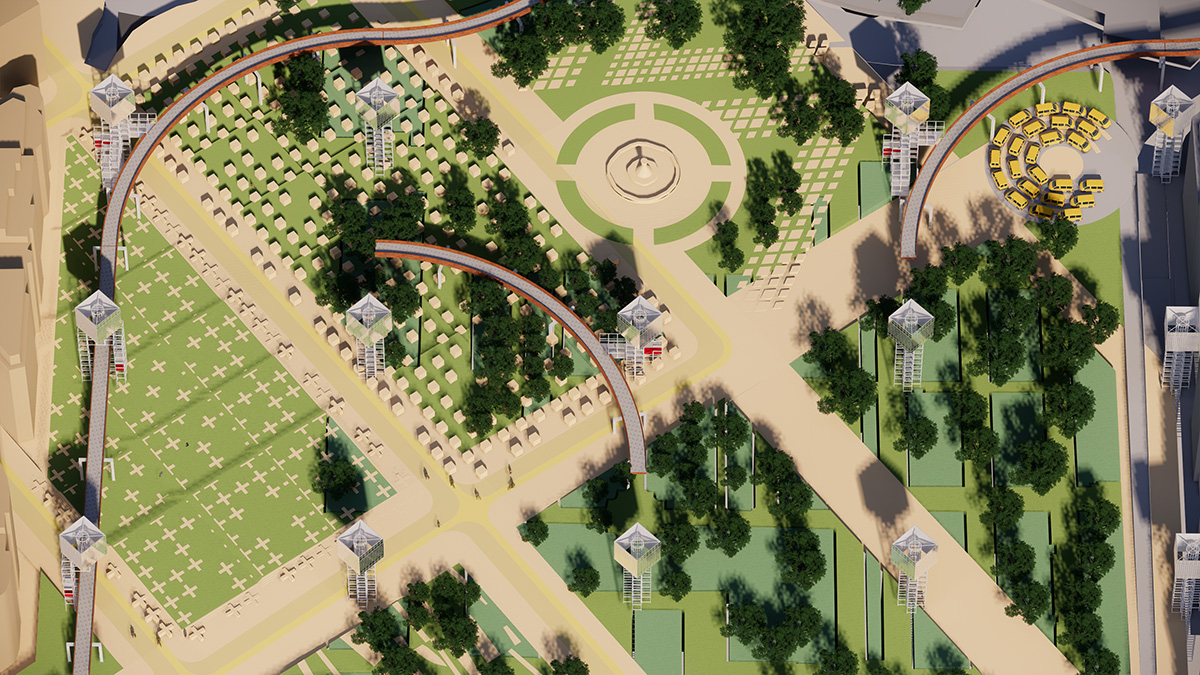 The government was showing the public two new addresses for gatherings: Yenikapi Meeting Zone and Maltepe Meeting Zone. These vast concrete plains - larger than Tiananmen Square were reclaimed land on the coast of Istanbul to justify the removal of Taksim Square from the city. Providing the central, most extensive of its kind solution to any need has been an urban planning strategy in the 21st century in Turkey. This formula was followed for city hospitals, court buildings, the need for gatherings treated in the same way.

The plan of filling Taksim Square with buildings was interrupted by the Gezi Protests started by people of Istanbul standing in front of the bulldozers at the end of May, beginning of June in 2013. As a result, the government was convinced not to build the shopping mall and ice rink. The protest forced Taksim to remain as a blank sheet with its existing problems, untouched. 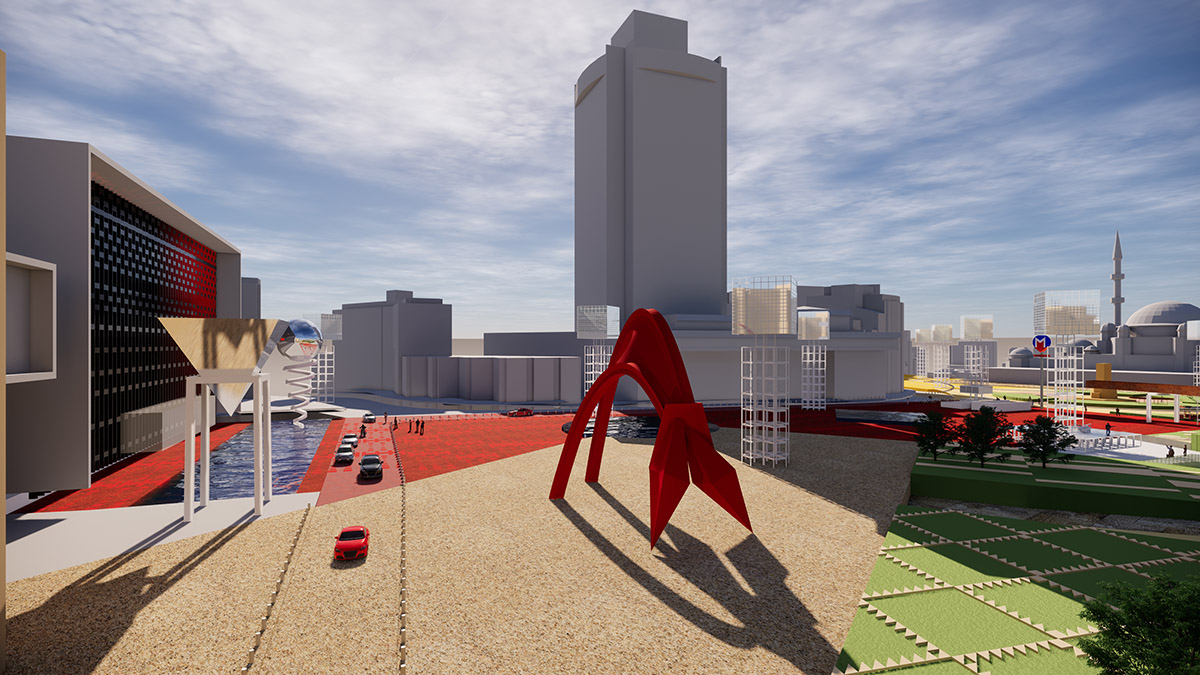 "What Taksim needs today is not a new author"

Yet, we have to come up with a strategy to make it a better place collectively. We are proposing a plan, a framework for immediate problems that can be realistically done and does not require unrealistic political power to bring into real life. The construction of the underground tunnel for vehicles from Tarlabasi to Sisli has just finished a few years ago, even though it is not ideal for pedestrian experience entering Taksim and increases the space in addition to the existing undefined space, we think it is a step taken that can have it’s own advantages.

Gezi Park is no longer as part of Henri Prost’s Green Valley idea. It is a park surrounded by police, and on the pre-2013 days, the park served substance abusers and had been a scary place to enter. The level change between the Taksim Square as we know and the Gezi Park created compartments within the potential great open space, resulting in disconnection. Consequently, Gezi Park has been a black hole in the middle of Istanbul. 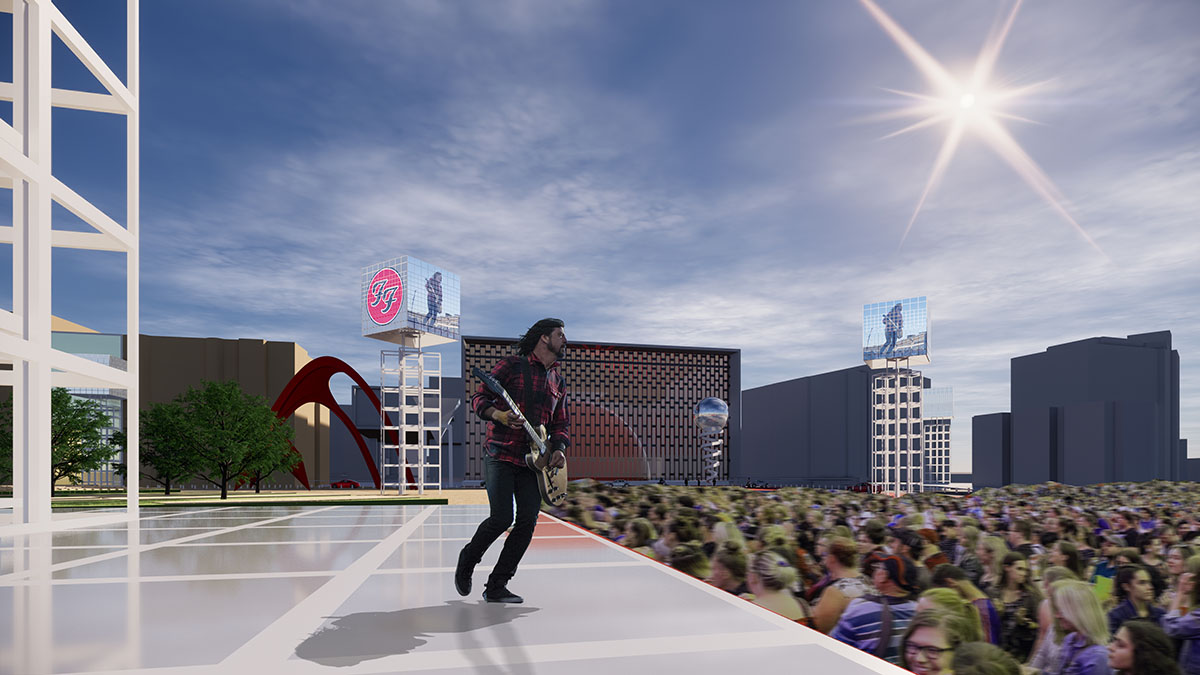 The empty space is valuable for the coming great Istanbul earthquake, and we are aiming to develop the park with material strategies for rainwater collection to set new standards for the rest of the development in Istanbul. 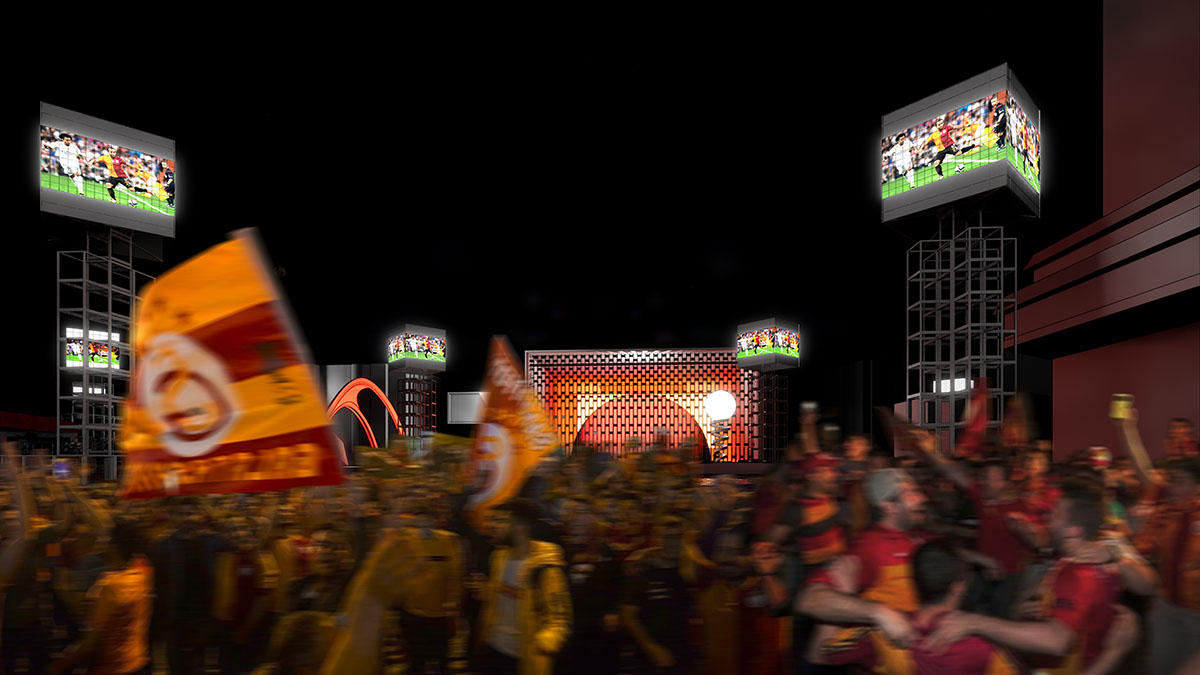 Since Gezi Park is untouchable for good reasons, there is a potential to extend the park just like a carpet onto the empty space. This carpet-like approach is similar to traditional Turkish treatment for empty concrete space, the living room. Turks traditionally pile carpets on top of each other with a sense of directionality - pointing corridors, rooms opening to the central space. We feel a similar approach would be appropriate for an empty concrete public space in Istanbul. Gardens, other ground treatments stacked on top of each other inspiring multiple uses into the open space. In Anatolia, carpets tell stories with their patterns; we aim to reflect the past of Taksim square within the choice of patterning.

We propose to expand the park onto the rest of Taksim Square. For the reasons explained above, we believe Taksim has lost its socio-political importance and remains as an undefined, wasted space right in the middle of a potentially very lively urban fabric. By expanding the park onto the indefinite area, we are aiming to ramp down and make these two levels one. A singular plain unifying Gezi Park with the Taksim Square again. 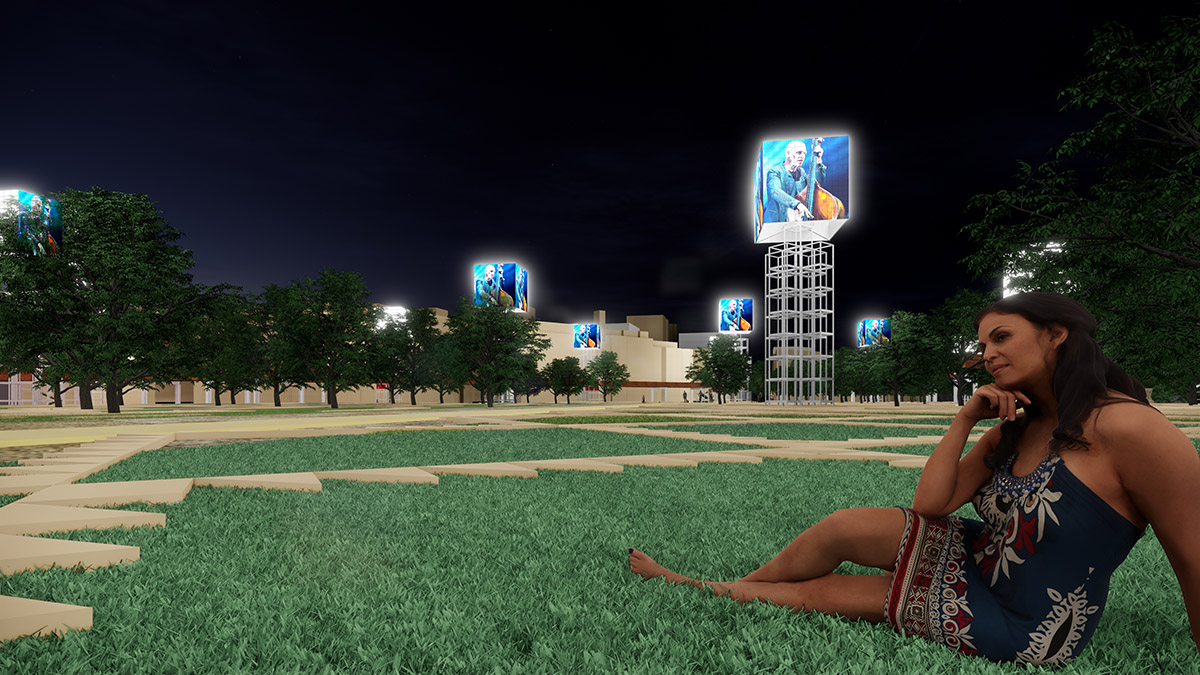 Recognizing its disconnection from Green Valley, instead of getting rid of Gezi Park, we want to give it a new definition; we want to open it up safely to the city with enough light and visual security. In Gezi Park, we want to avoid too many tree relocations; therefore, we only change the walkways within the park, redirecting them into the city. Plugging them into existing flows, following axis from existing Talimhane, and align and ramp it down to Istiklal Street.

This extension of the city grid from Talimhane gives us a rotated square within the project zone. We call this square Gezi Park District. This rotated square defines a new potential for redevelopment, reuse of existing buildings in Talimhane in harmony with the new Taksim Square. It also leaves a negative space on four sides to be defined. One corner will be serving Istiklal Street; the second corner will belong to AKM, and the third corner as a dense green zone full of trees and fourth corner will provide Sisli Urban connection.

This focus area development will be called Gezi Park District. Taking two blocks of Talimhane within its influence area, we would like to give a new definition to the emptiness existing at the moment without building a single new building.

We define a system to read the existing fabric of Taksim Square; it is a 50m x 50m module starting from Cumhuriyet Aniti, Gezi Fountain, and edges of the square fall entirely within this grid system. This grid is also used to form terraces moving the ground plane up and down to match the topographical differences. 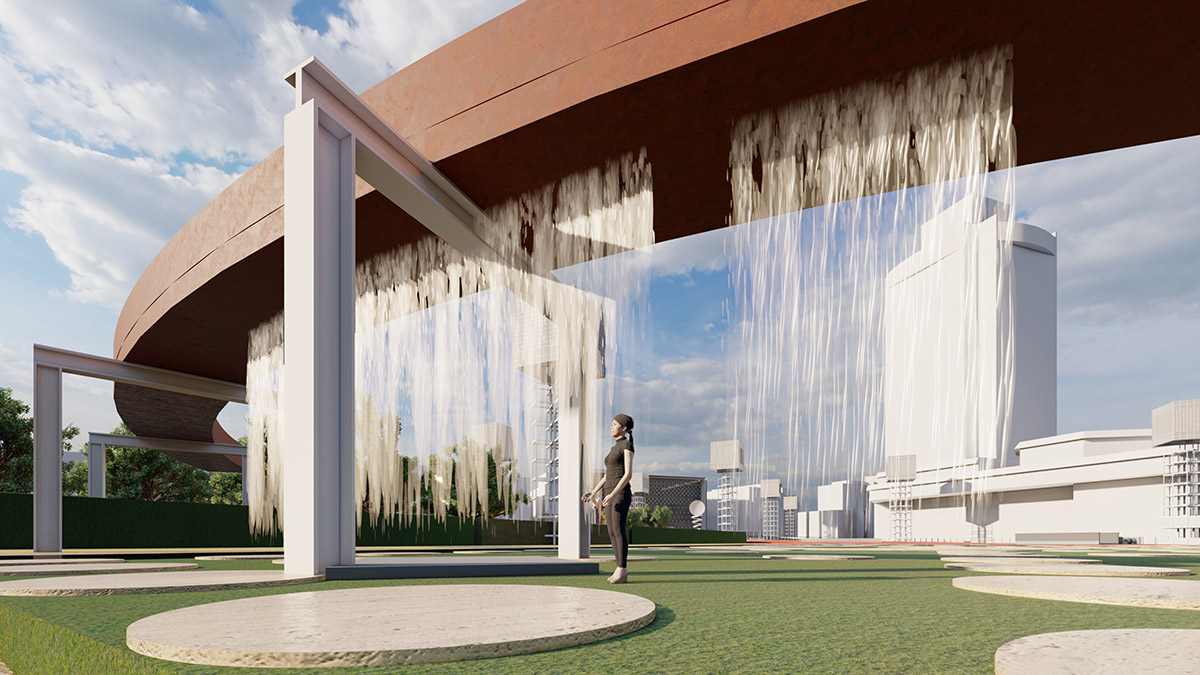 The existing city fabric of Talimhane is to be partially renewed by injecting new buildings into the locations falling on this 50m x 50m grid defined by us following existing structures in Taksim. These interventions will be open to design competitions and also given to trusted major architects of Istanbul for redevelopment. Instead of a Tabula Rasa approach, this will slow down the evolution and make the regeneration more natural.

The marble staircase of Gezi Park will be preserved as an amphitheater facing the red carpet for the public in front of AKM, which is a new zone defined by us as a place for gathering for celebrations, protests in a more reasonable size. The crowd will still have the potential to spread over the grass and Gezi Park area since we get rid of the level change in our proposal.

The red carpet for all is a red ground where also Istanbul Metro is exiting; taxis drop you off; it is the zone of arrival. We keep the vehicle road as it is in front of AKM but would level this road with the red ground, and only define the vehicle road with balustrades. Once a year, a design competition will be held among artists and architects to design a pavilion on the corner of AKM, similar to “Kavusma Duragı” built in 2020. 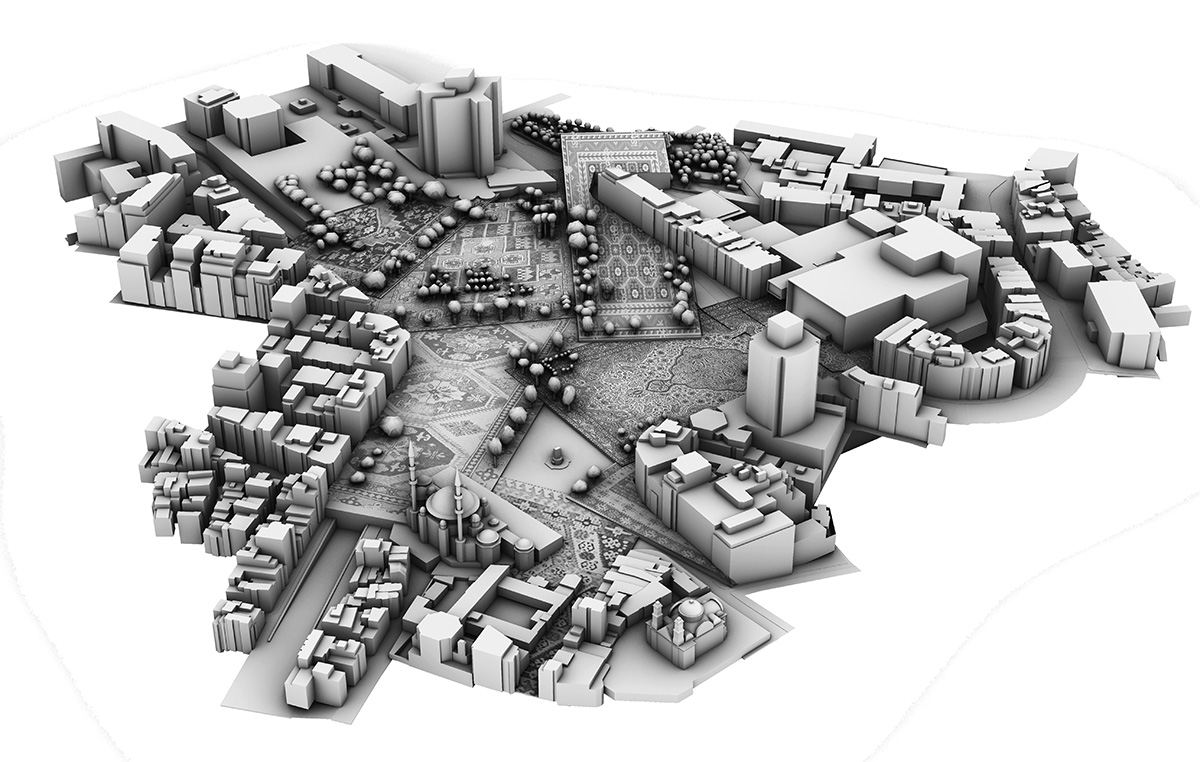 The biggest intervention we are proposing is a lightweight, relatively cheap scaffolding structure that will mark each node on our 50m x 50m grid, providing lighting, electricity, and other infrastructural needs for the new Taksim Square; the pavilions. Pavilions will host infrastructure such as small programs like kiosks for food, newspapers, coffee shops.

The cube-like screens on top of each pavilion will have the capability to move up and down almost 15m. The multimedia shows will be held on special occasions, sponsors, and media artists will be able to design spectacular experience 24 hours a day in the heart of the city. The selected pavilions will also be designed via competition between artists and architects.

We are also proposing elevated walkways that are acting as bridges to North and North East, connecting Taksim to Ataturk Kitapligi and Divan Hotel. These walkways would be integrated into the pavilions for circulation. 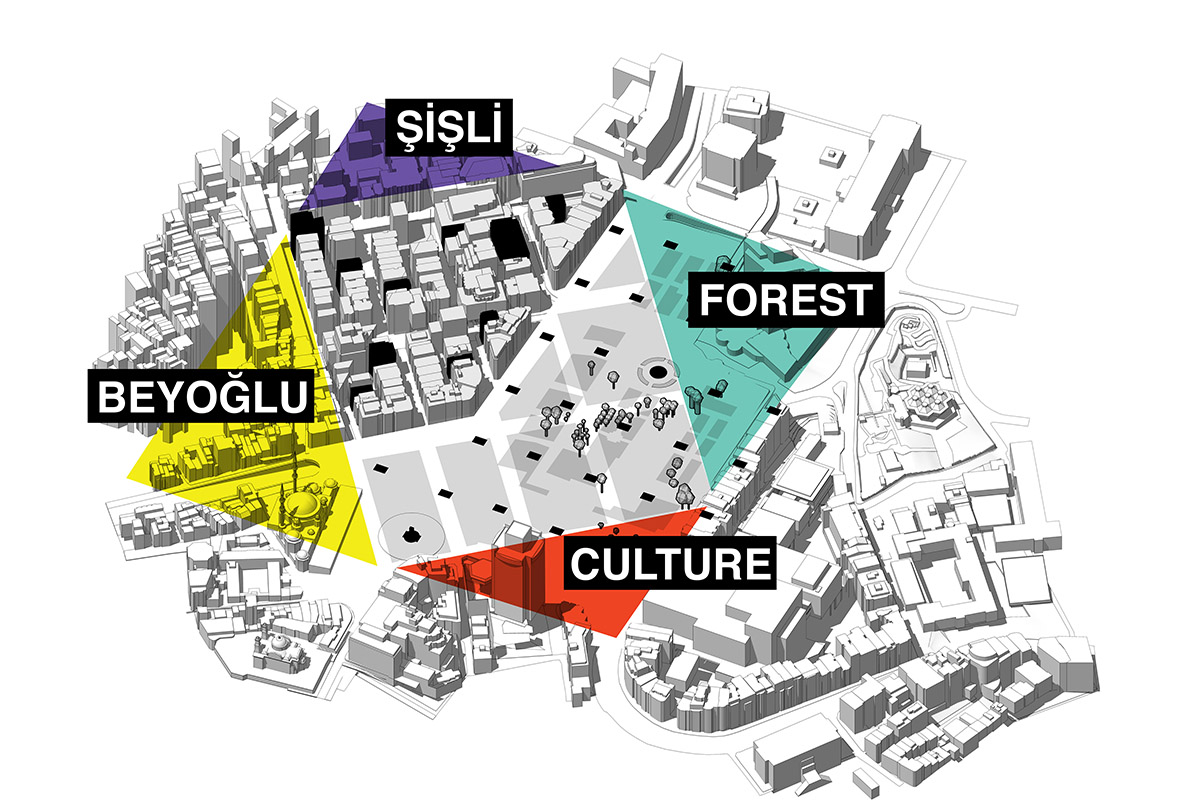 Gezi Park District, in time, will become a lively place like Asmalimescit, announcing the rebirth of Taksim, which will influence Istiklal Street and Sisli to be more urban, filled with people again, celebrating life in a sustainable way full of culture and art, the way it used to be.

We are proposing a collective strategy to give birth to a new social city center taking advantage of its lightness after the migration of its every single function to the north and waterfront of Istanbul. 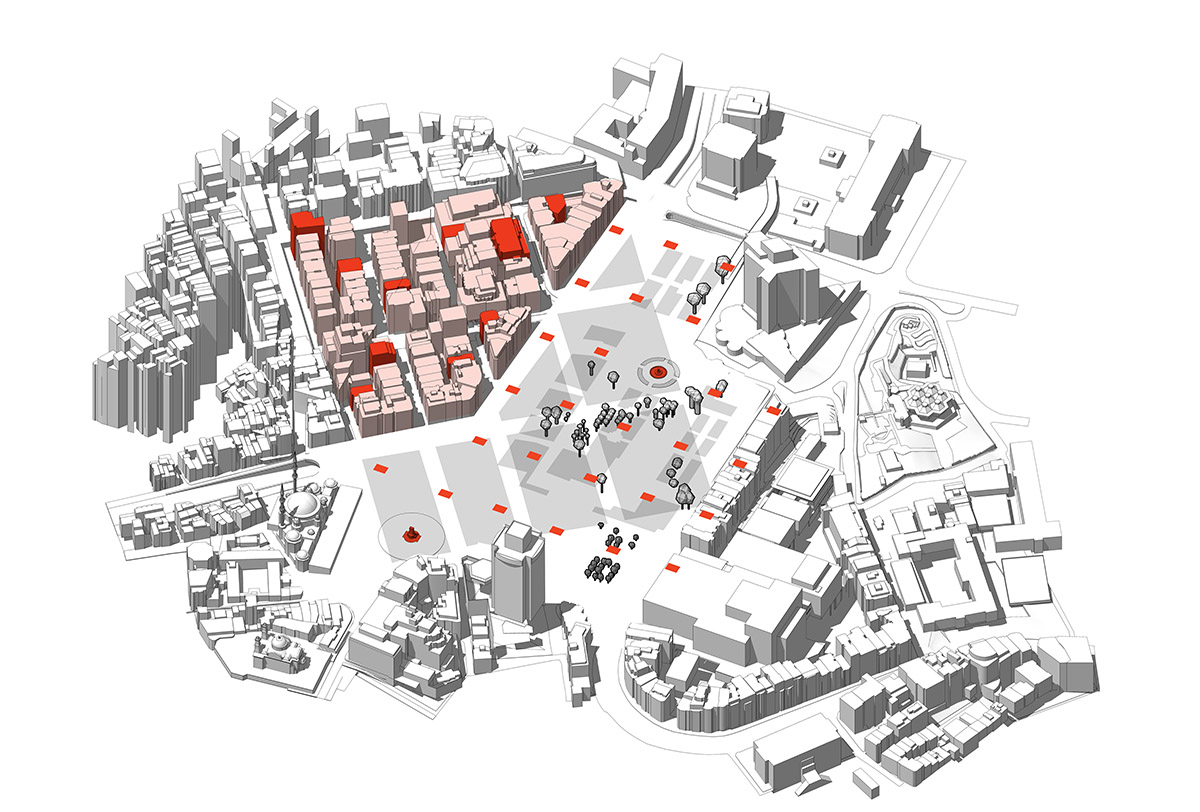 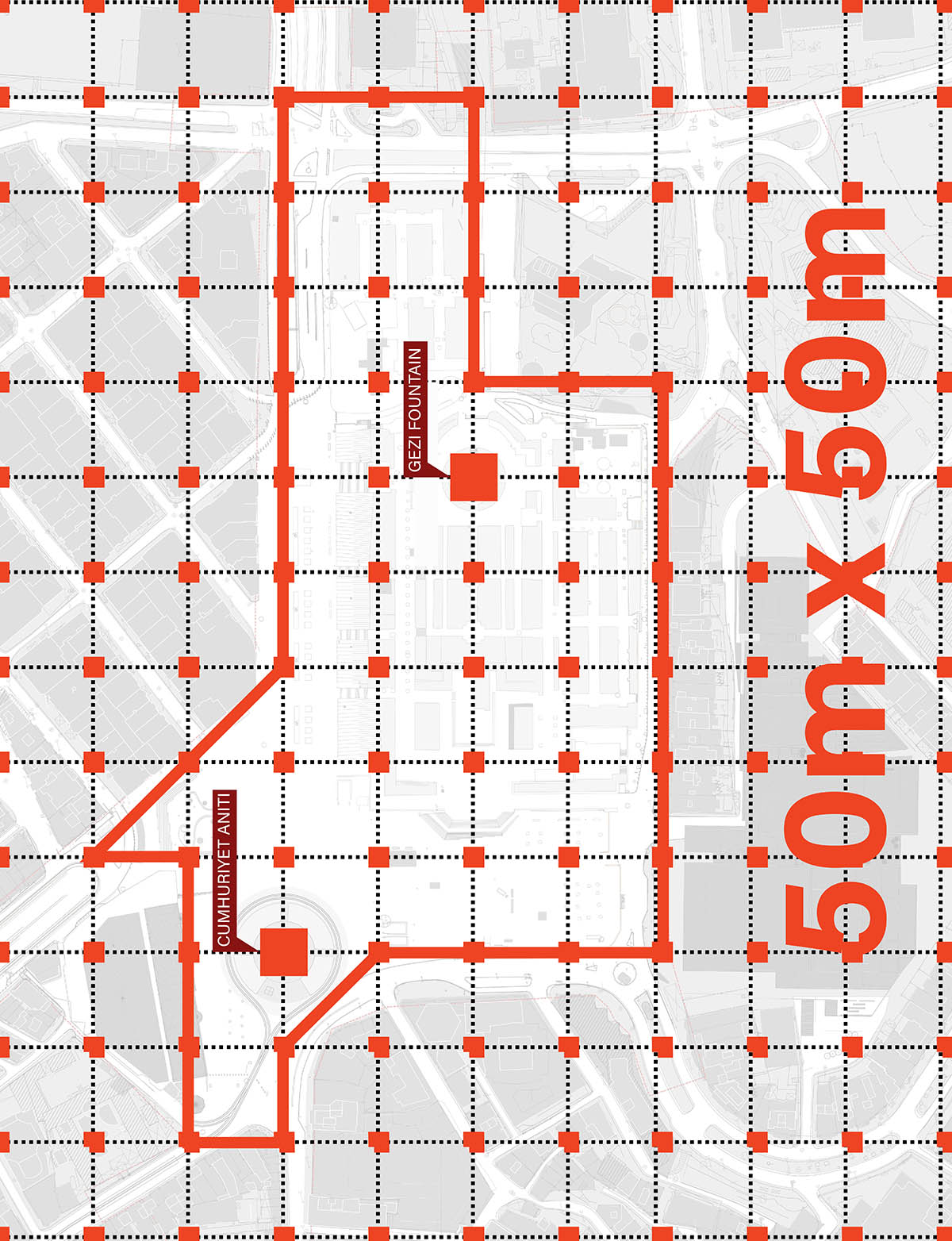 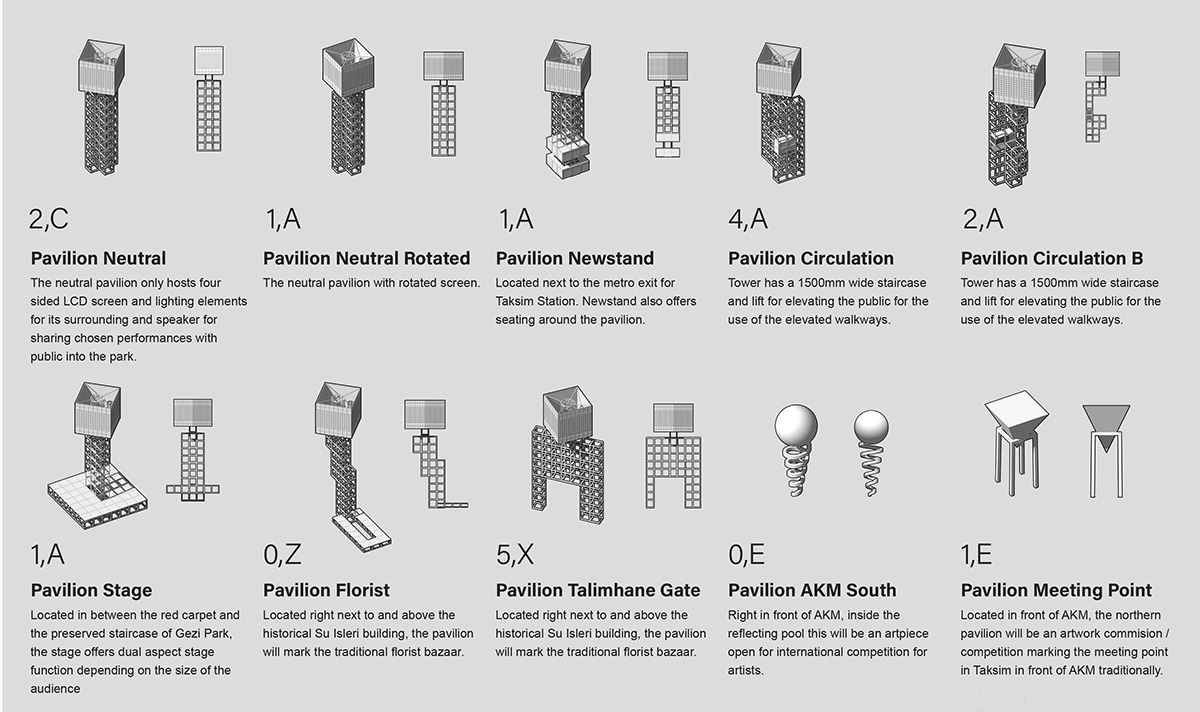