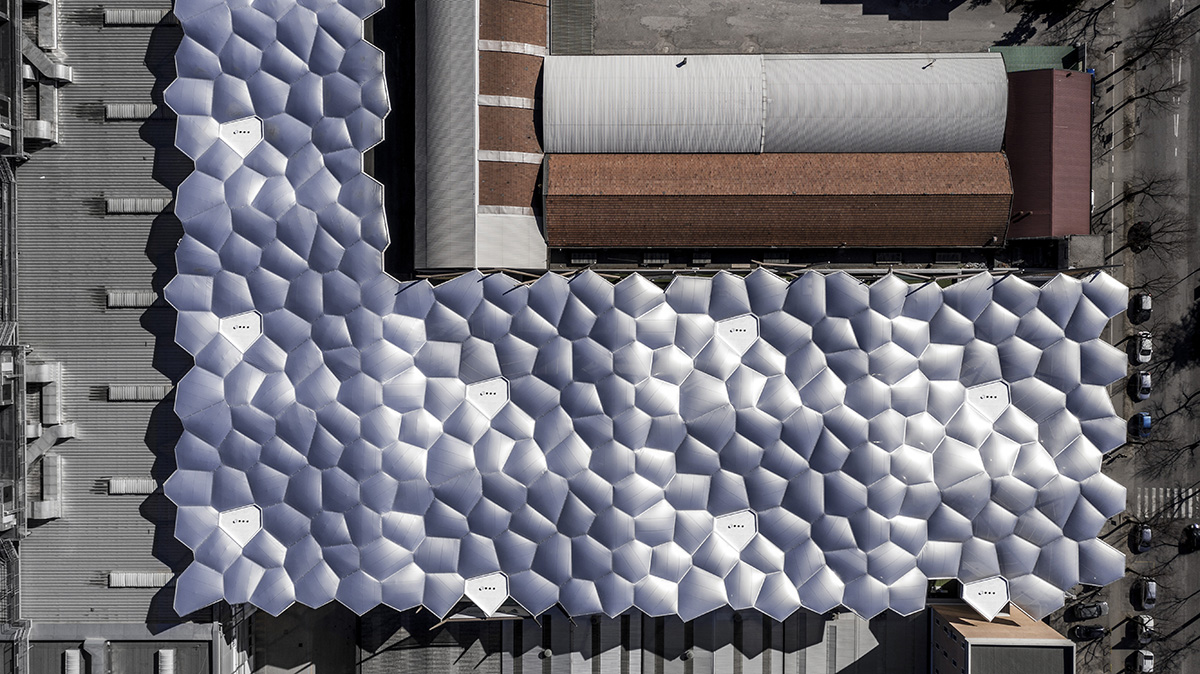 Multi-disciplined engineering firm Maffeis Engineering has added a wavy and translucent canopy to the south side of the Veronafiere Trade Show ground, an international leader in the agriculture and agro-food sector, hosting 45% of Italian trade shows in their two fields.

Named New Entrance Re Teodorico, the project creates a dynamic atmosphere for the visitors of the trade show, its undulating form can be perceived from far away and marks the project site.

The project is made of a steel roof structure and in L-shape plan and it extends over an area of 6,750 square meters. The design is based on merging the two concepts of an undulating veil and an organic surface. 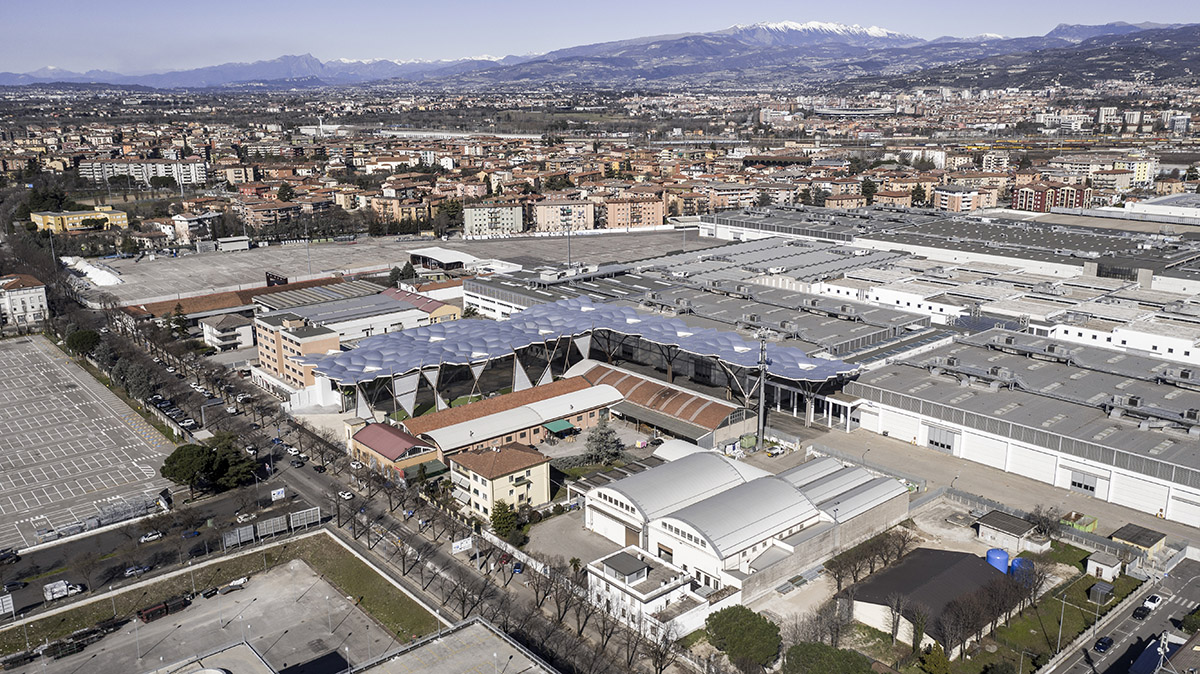 The wavy effect was created with high and low points in the structure, that are required for drainage. The firm formed this organic shape by using a Voronoi pattern highlighting diversity as a visual effect.

The macro modules with each one low point were repeated several times to facilitate fabrication and mitigate cost but from the visual side this is not noticeable. The repetition is a key effect in the structure, but to an observer’s eye, one cannot grasp this repetition due to the different array of the columns. 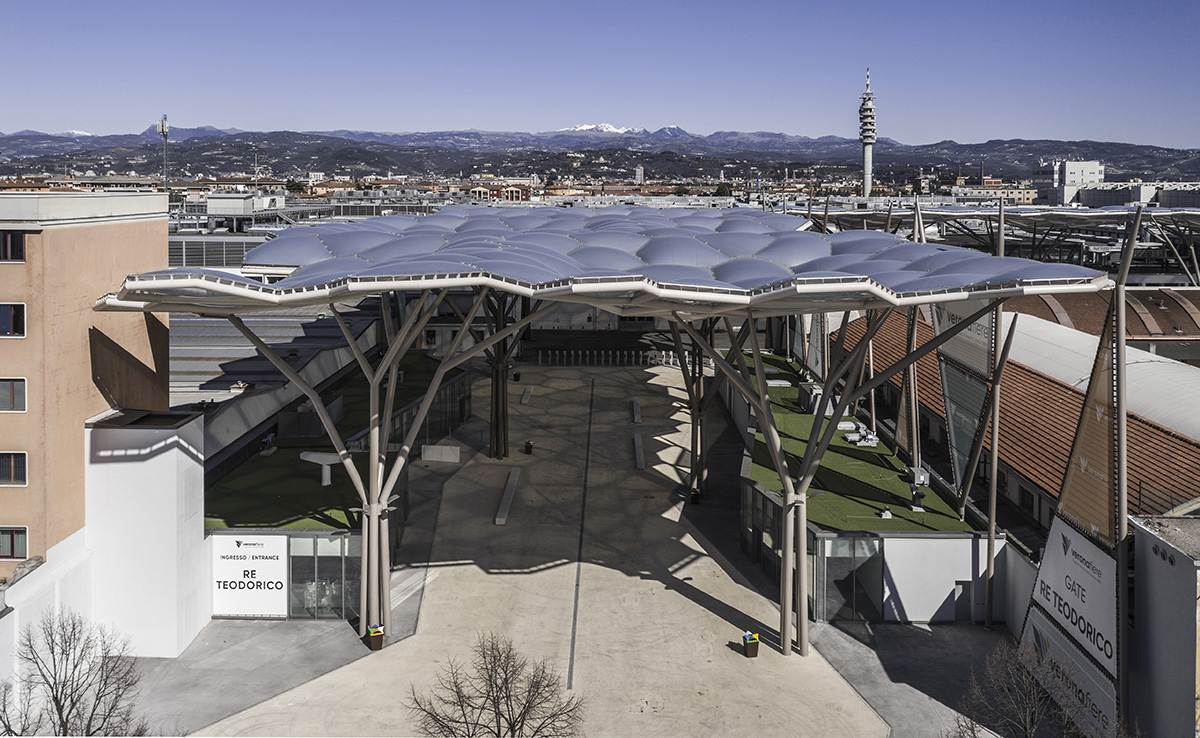 The roof is carried on 17-metre high steel columns that are designed to represent trees in the woods with their tapered upper columns. At the top of the columns diagonal members project to support the roof, mimicking tree branches.

The columns are located under the low point of the canopy and the drainage of the Voronoi occurs through the columns core into the ground.

The steel columns are painted in different brown Pantone tonalities to resemble the effect of being in the woods, with brighter colors at the entrance and slightly darker colors as you move further down the Plaza.

For the canopy’s 3 different shades of fritted ETFE in a 2-layer composition was used to emphasize the differentiation between the macrostructures.

"The ETFE pillows are representing an undulating veil from the top and from underneath representing tree leaves," said Maffeis Engineering.

"The different shading options were analyzed with an environmental analysis tool to create a comfortable area in winter and summer for the visitors. Outdoor comfort is complex to assess."

"Unlike what happens in indoor environment, people are exposed to a multitude of variables when spending time outdoors."

"These variables are difficult to foresee and to control without transforming the outdoor space into an indoor area," the firm added. 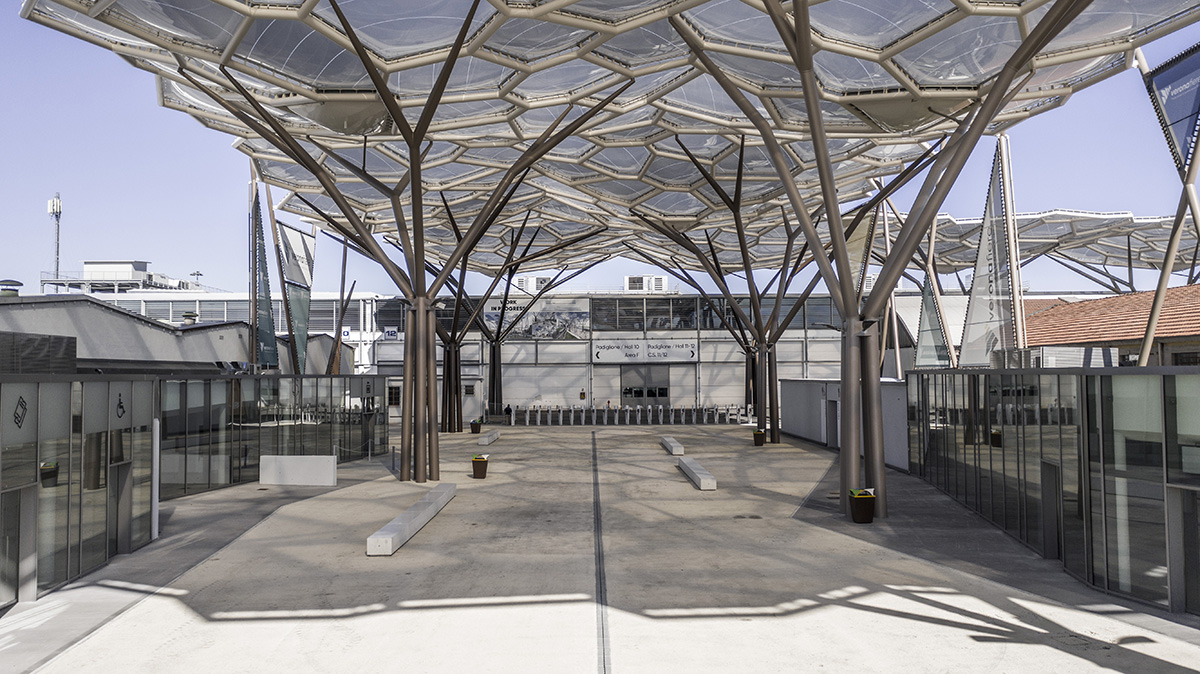 Under the roof, light is controlled by defining the amount of dark and light fritted pillows. The necessary light transmission as well as heat gain on the ground during the fair season was also influenced by the fritted ETFE. A translucent canopy has Mean Radiant Temperature a little higher than Dry Bulb Temperature.

As the firm highlighted, the whole canopy structure weighs 495 tons of carbon steel welded on site due to structural and cost reasons. The macro modules were lifted onto the column trees via mobile cranes and then were welded to each other. There is no bolted connection on the project. 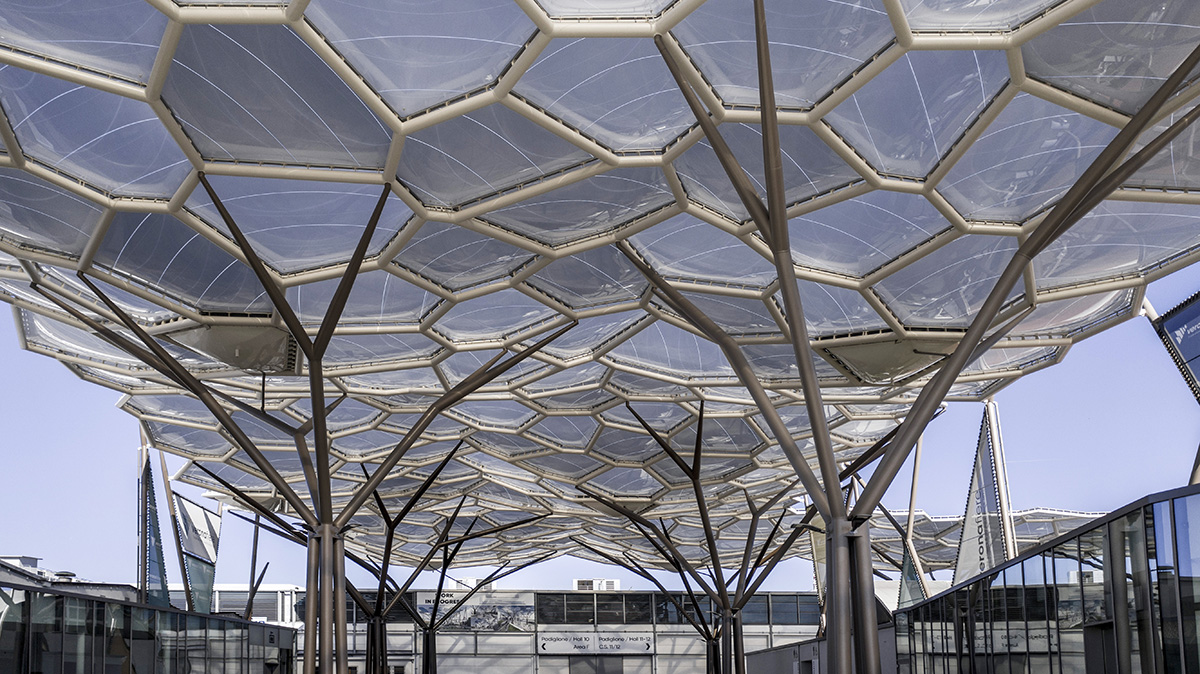 "The main objective was to demonstrate a high-level steel structure controlled by computational design in all stages from design to analysis and construction details," the studio continued.

The Voronoi pattern is generated with Grasshopper software in Rhino3D by a set of given points. The process started with first identifying the optimum insertion points for the tree shaped columns thorough structural analysis. Following that, a set of points were generated around the column to create the tree shape block of Voronoi module panels. 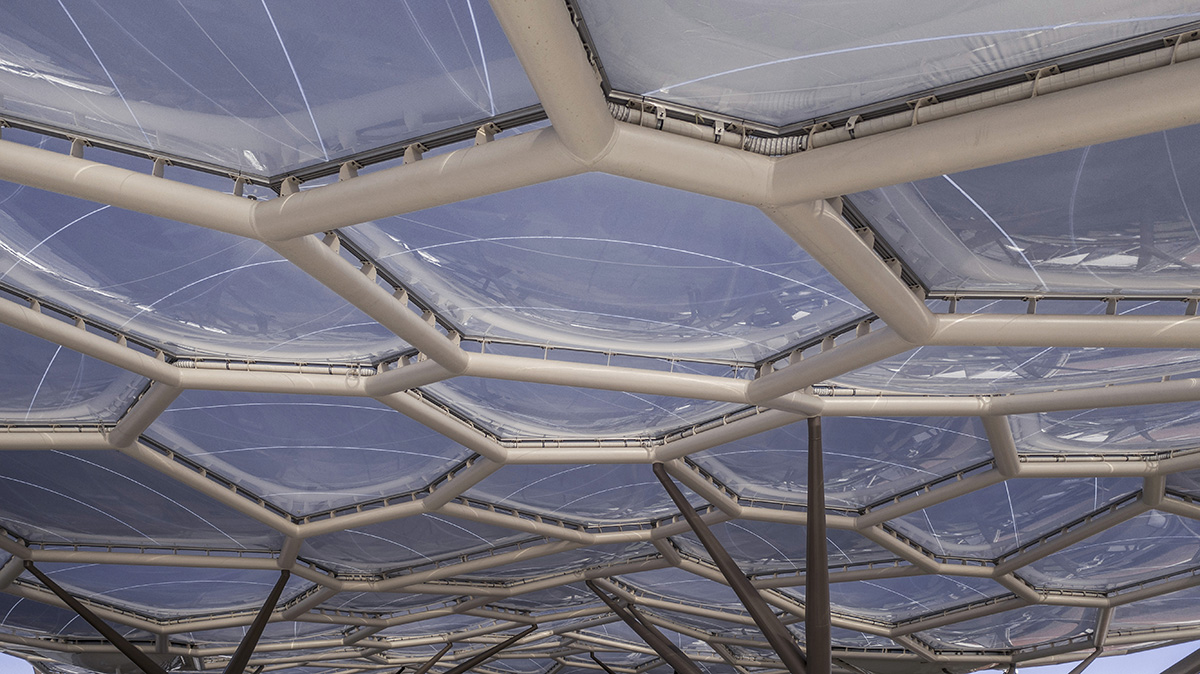 The 2D Voronoi tessellation then was projected to the undulating veil surface. The project is controlled by the Grasshopper model to perform FEM analyses.

The New Entrance Re Teodorico is just the beginning of what could become a new Voronoi masterplan, extendable to the entire area of Veronafiere. 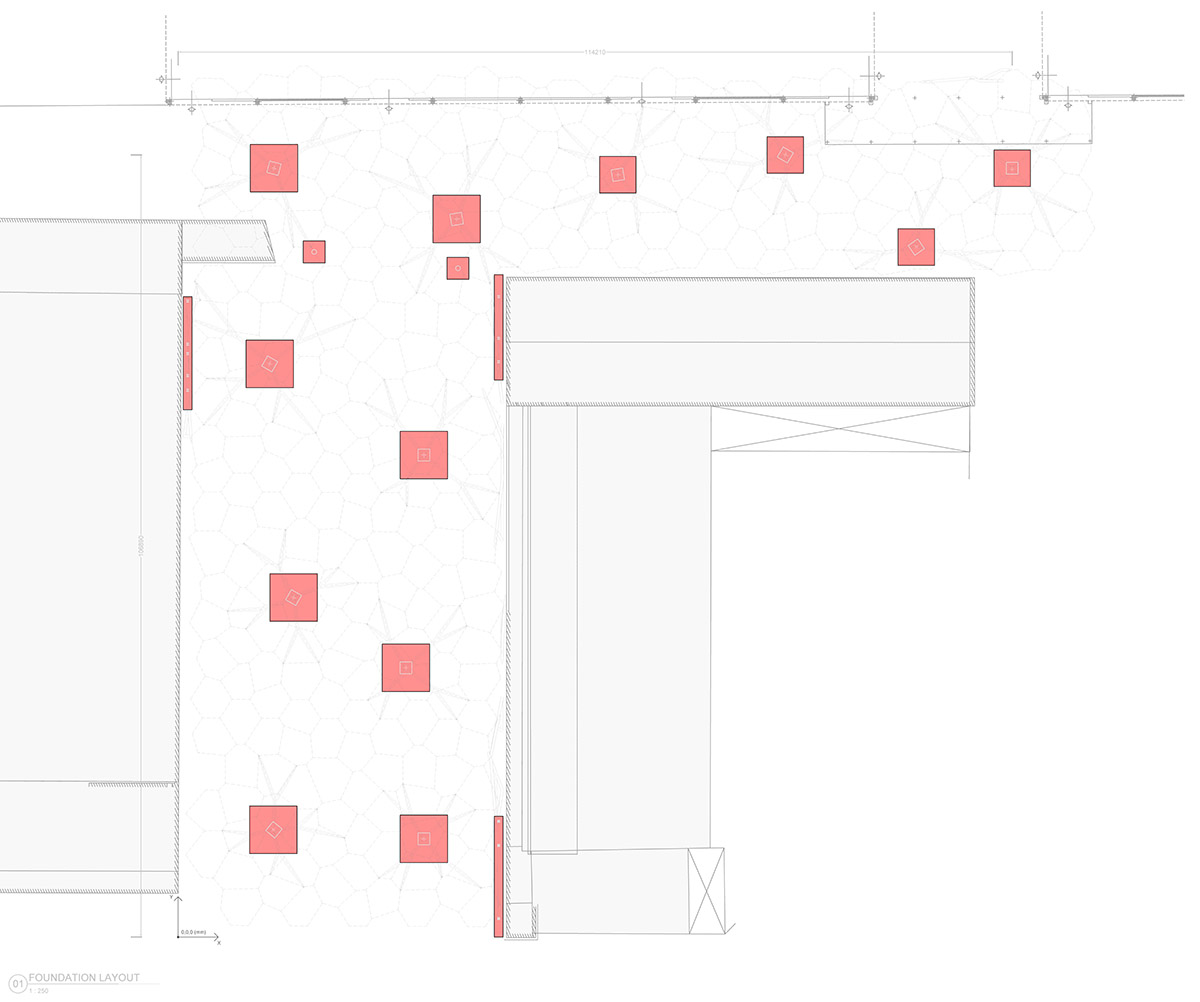 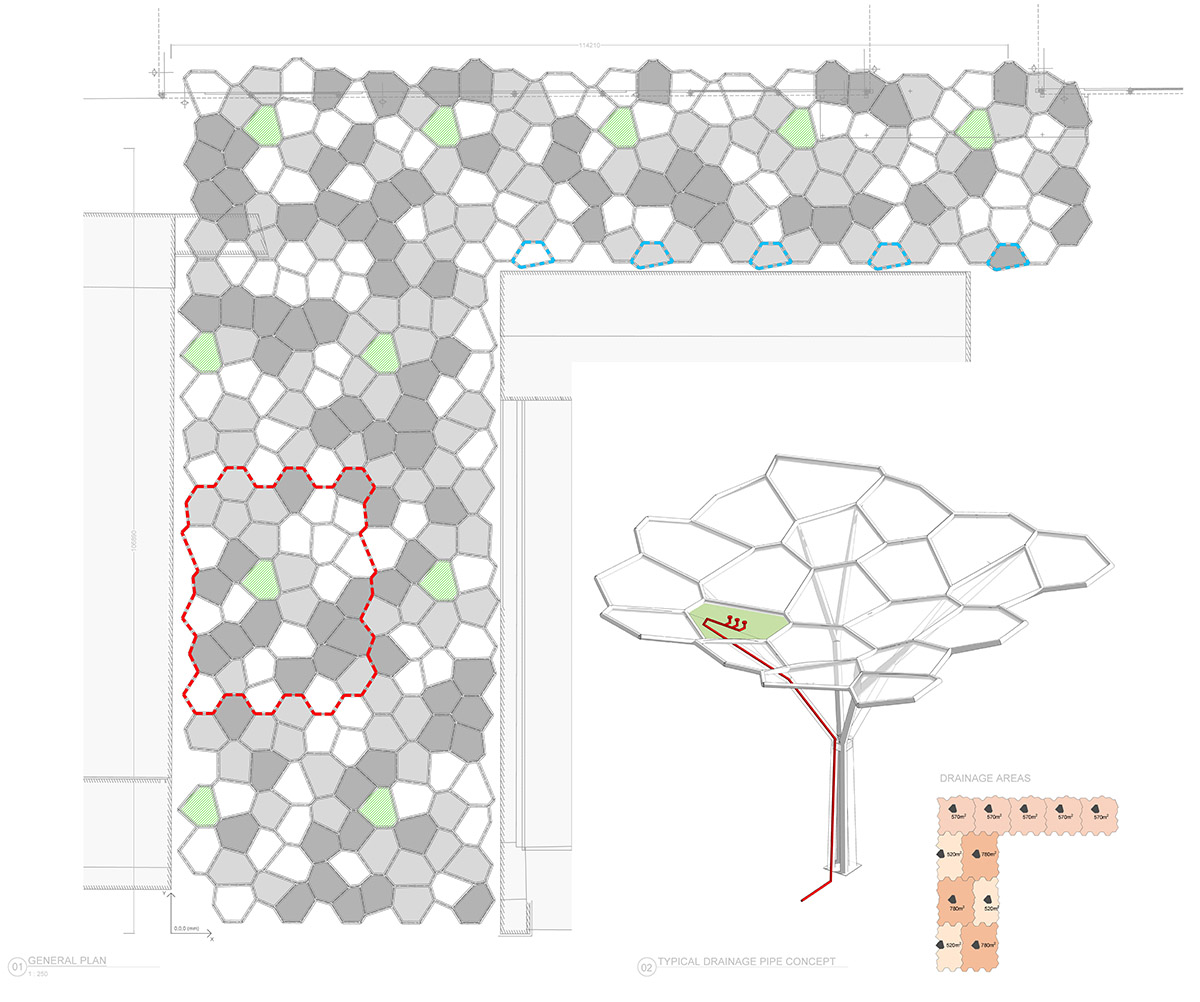 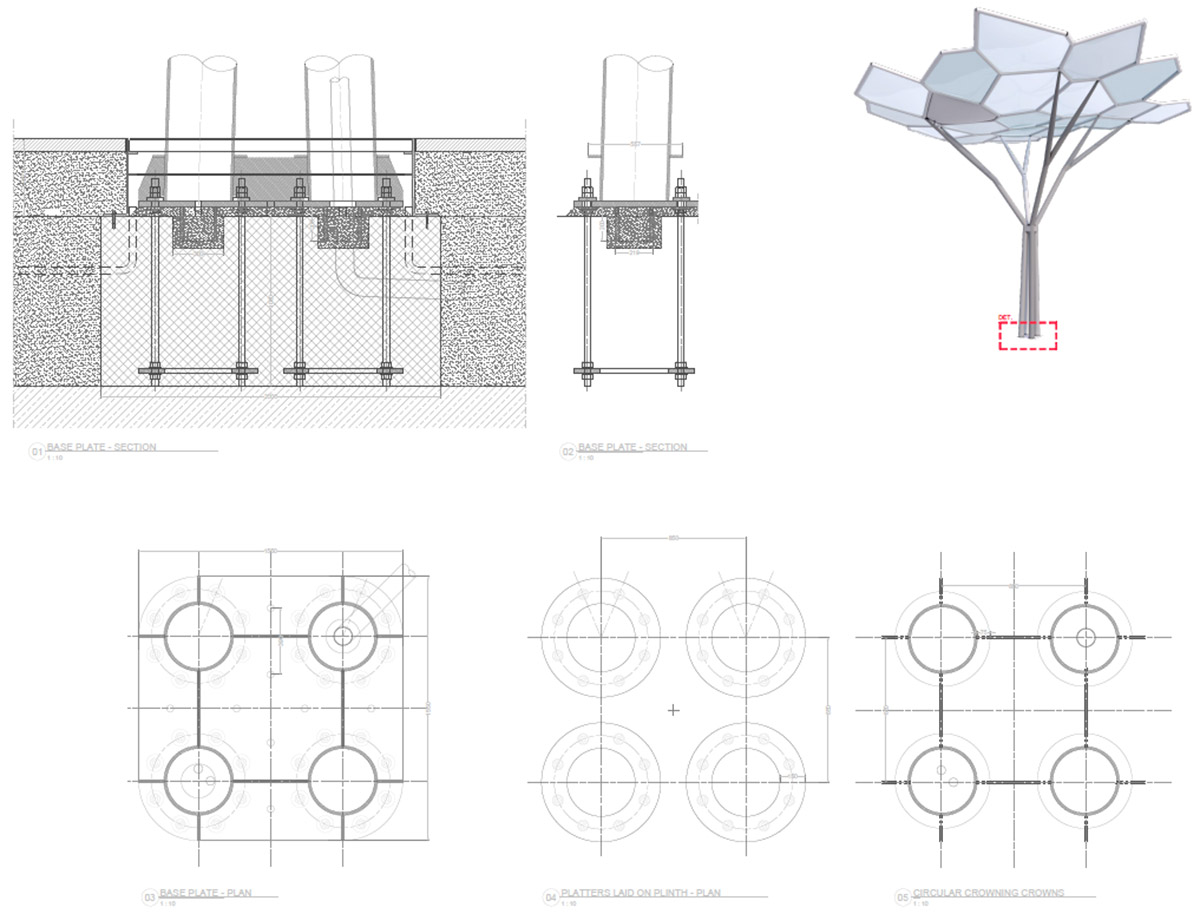 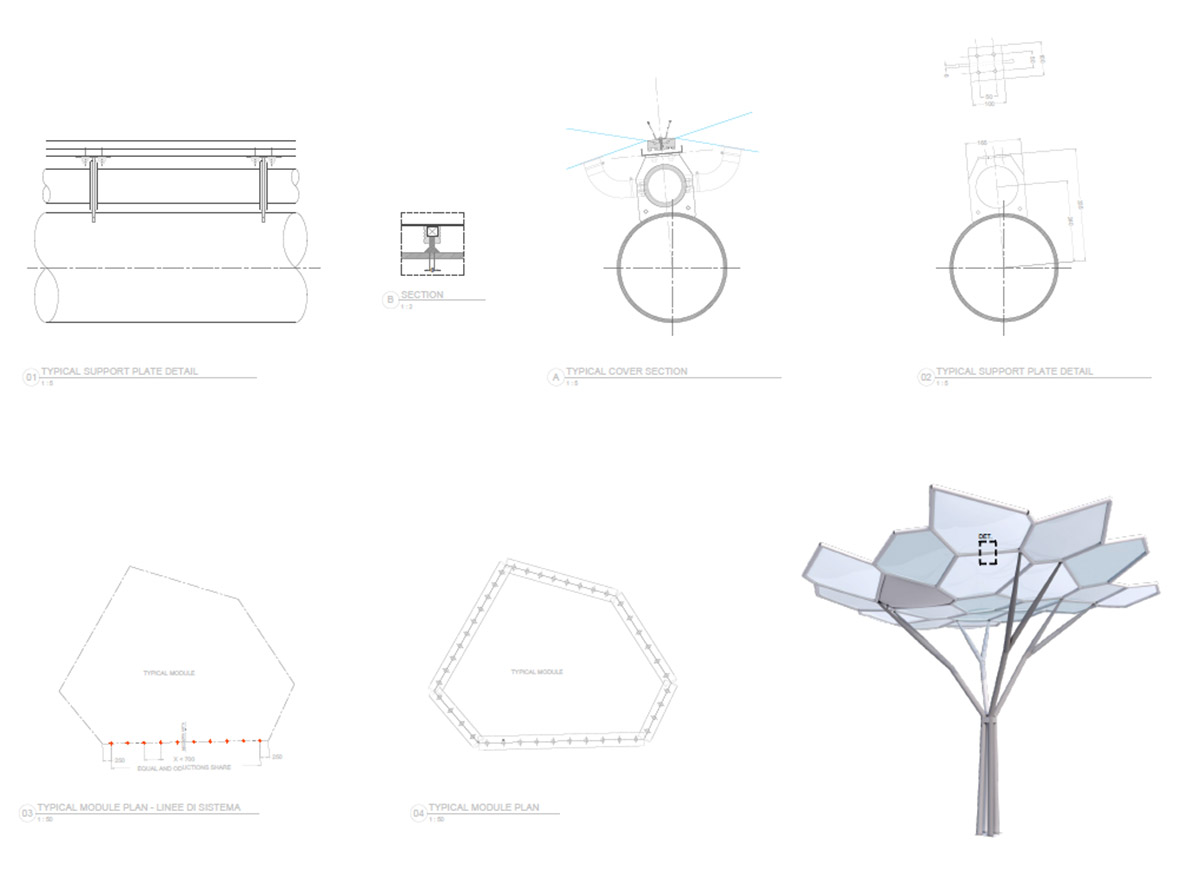 All images © The Piranesi Experience