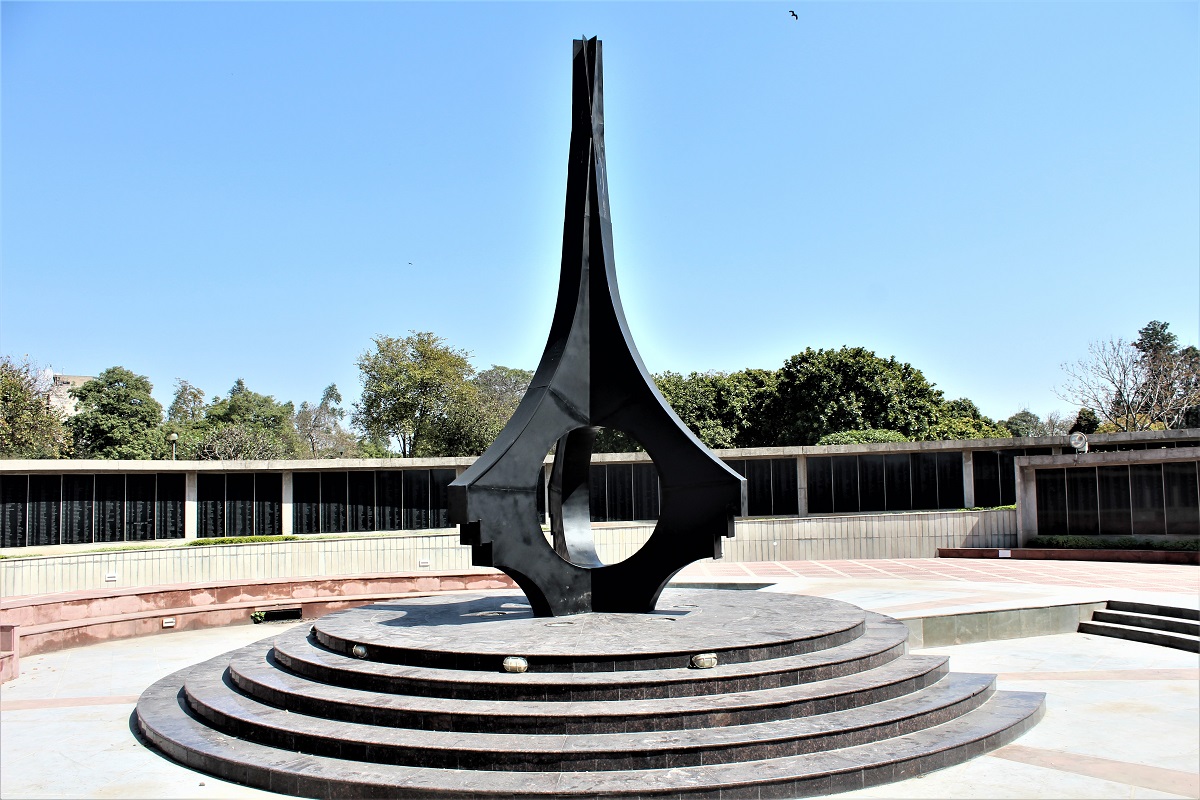 Chandigarh War Memorial is one of the few memorials built in India in the post-Independence era. When completed, it was perhaps the largest memorial dedicated to war heroes in the country. Significance of this memorial can be gauged from the fact that it was inaugurated by the then President of India, Dr APJ Abdul Kalam on August 17, 2006. 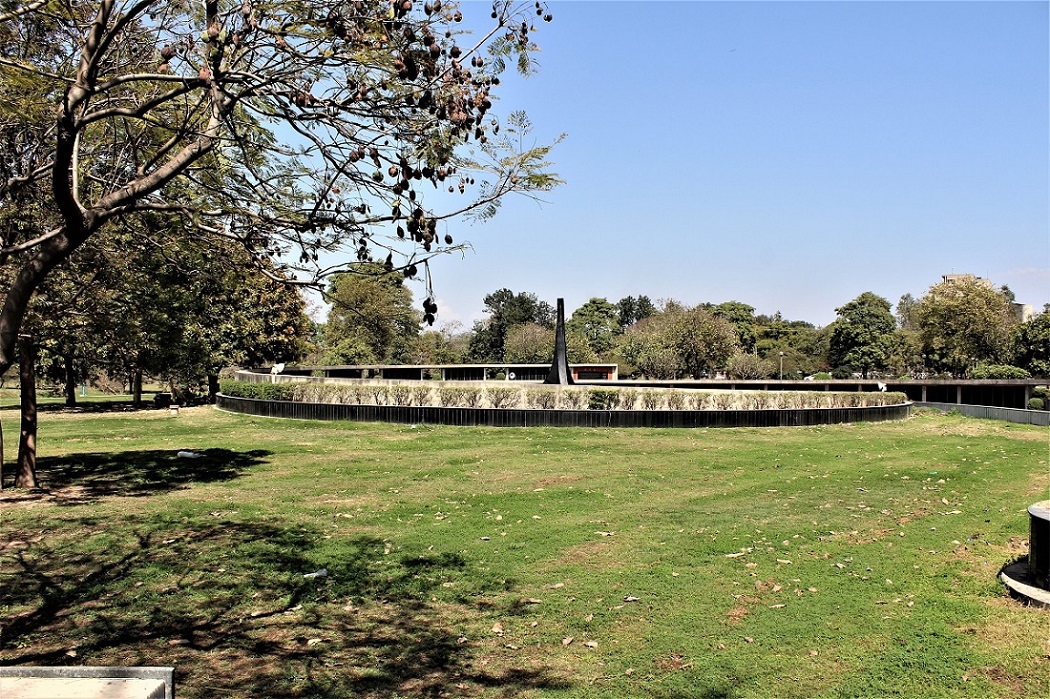 The memorial has been set-up to preserve the memory of about 10,500 brave martyrs from the states of Punjab, Haryana, Himachal Pradesh, and the Union Territory of Chandigarh. It is an expression of the nation’s gratitude for the supreme sacrifice made by its bravehearts.

Chandigarh War Memorial was the brainchild of Lt Gen JFR Jacob (Retd), a 1971 Indo-Pak war hero, who was then the Governor of Punjab and Administrator of the Union Territory of Chandigarh. While laying the foundation stone on April 28, 2004, Gen Jacob termed this memorial as a “Shandar Yadgar” (Magnificent Memorial). 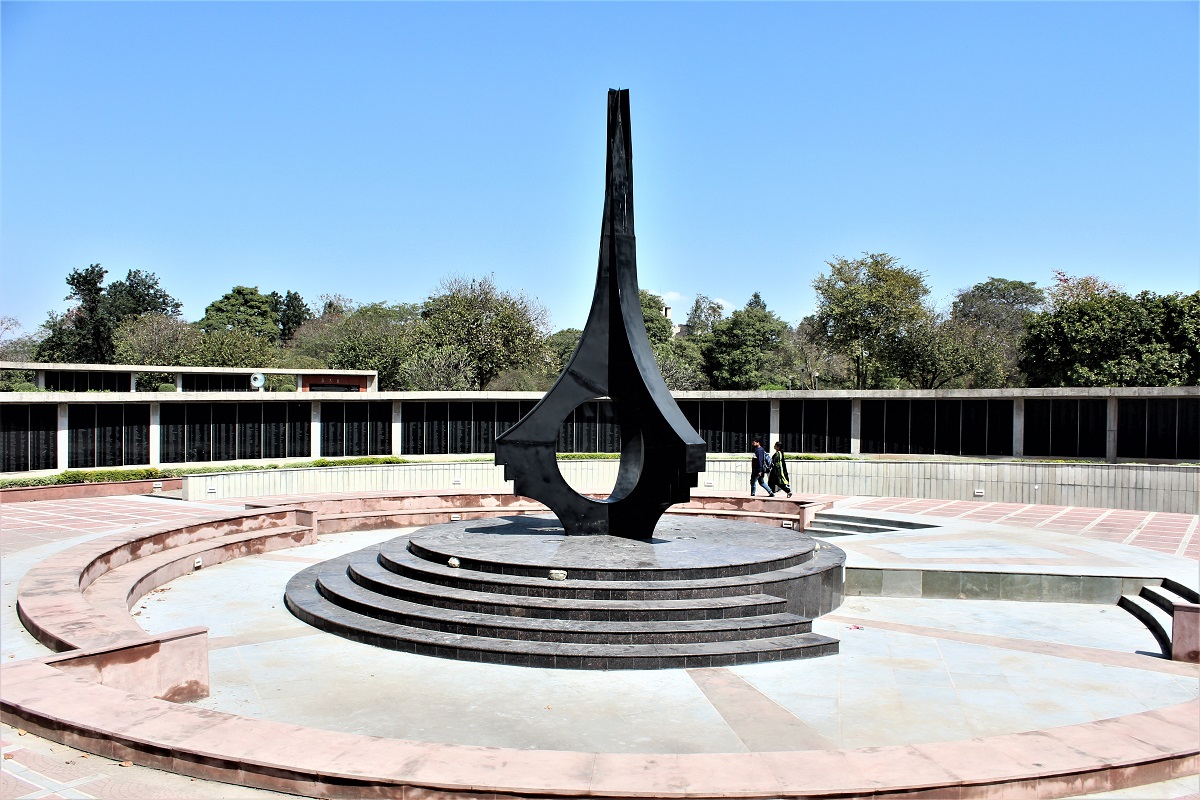 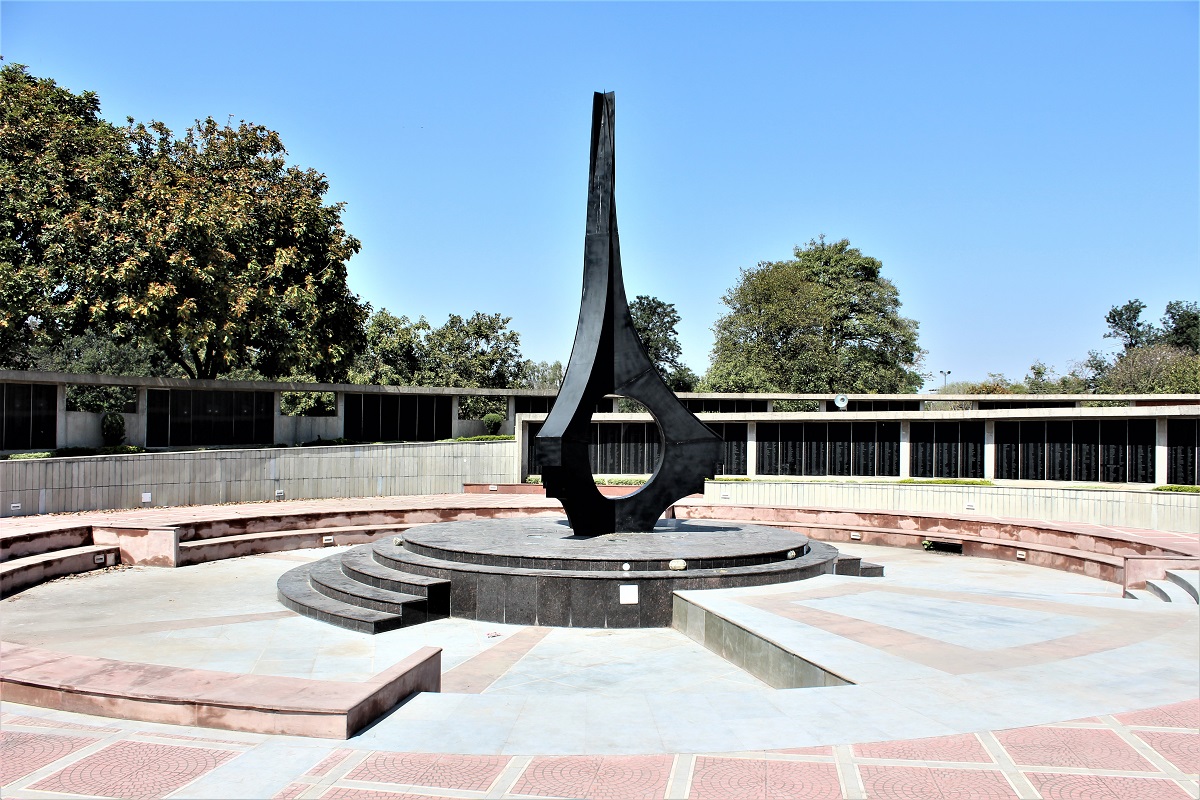 There are two significant aspects which make this memorial a special one for the country. The first one is, that it was constructed with the funds raised through a citizens’ initiative led by the Indian Express Group of Newspapers and supported by its very special community of readers. No government money was spent on its construction.

The second significant aspect is that it was not designed by any renowned architect instead, the design was prepared by two students of the Chandigarh College of Architecture namely, Shivani Guglani and Nanaki Singh. These students were then in their 9th Semester (Final Year) of Bachelor of Architecture course in 2002-2003. It was Gen Jacob’s ides that the design of this prestigious memorial should be prepared by some young students of the local college of architecture. A competition was conducted amongst the students and the winning proposal by Shivani and Nanaki was adopted for implementation. 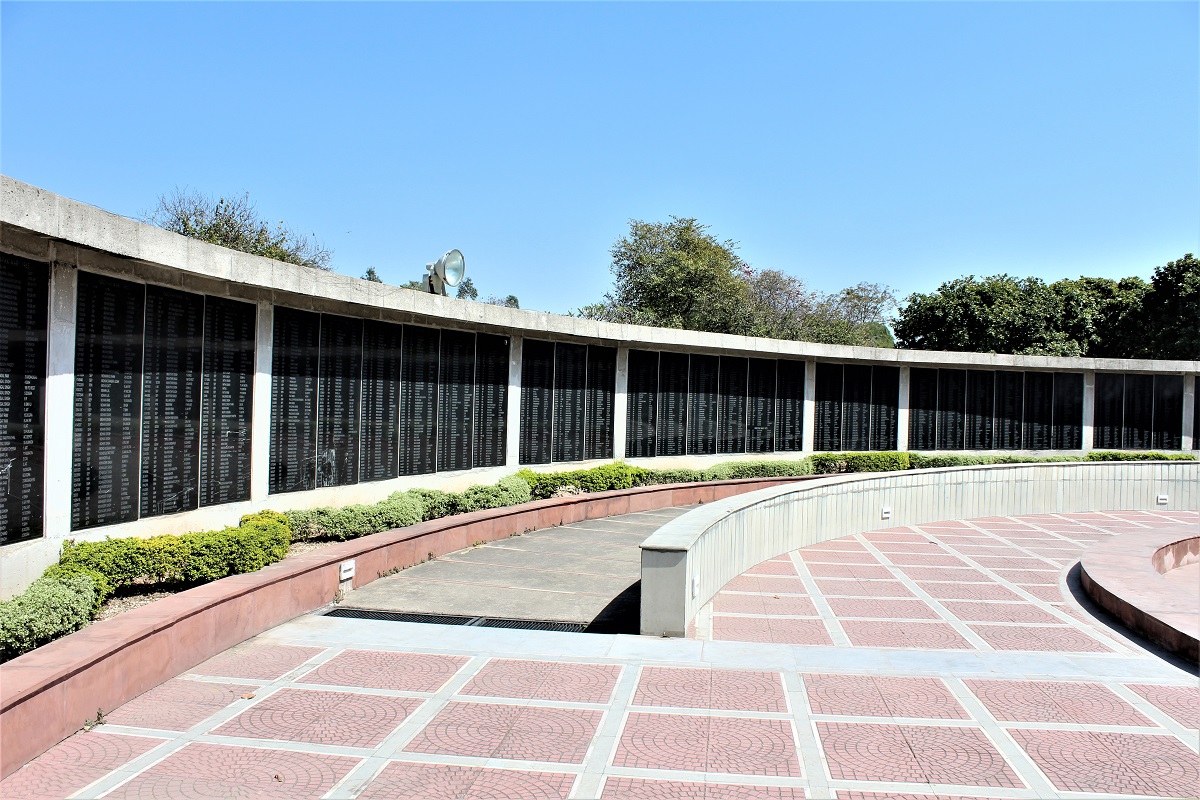 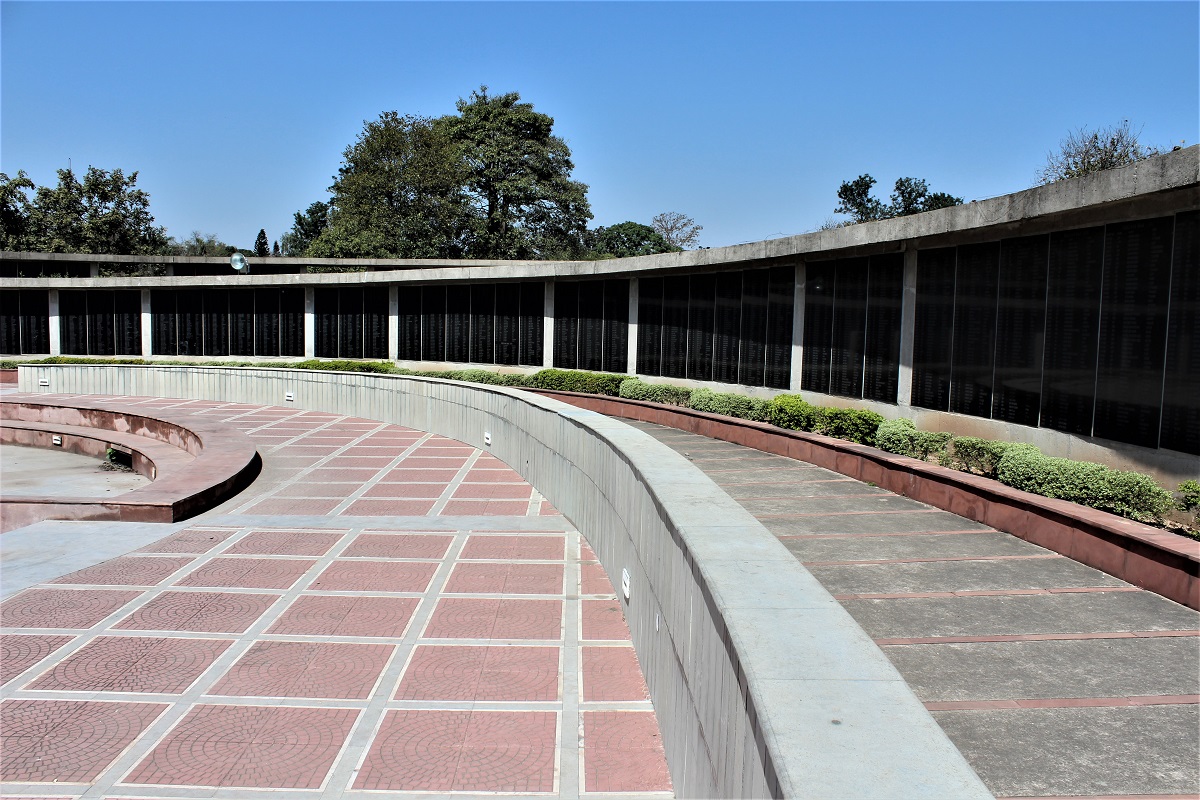 The concept design prepared by these students was then handed over to the Department of Urban Planning, Chandigarh Administration for fine-tuning of the drawings and finalising the specifications. Shams Shaikh, a young architect of the department was put to task under the overall guidance of Renu Saigal who was then the Chief Architect of the Chandigarh Administration.

The Chandigarh War Memorial occupies a prominent place in the Leisure Valley / Bougainvillea Garden in Sector-2 adjacent to the Capitol Complex of Chandigarh designed by Le Corbusier. The location of the site though was very important yet it posed a bigger challenge to the designers. As per Corbusier’s edict, no massive structure is allowed to be built in the Leisure Valley and adjacent to the Capitol Complex. 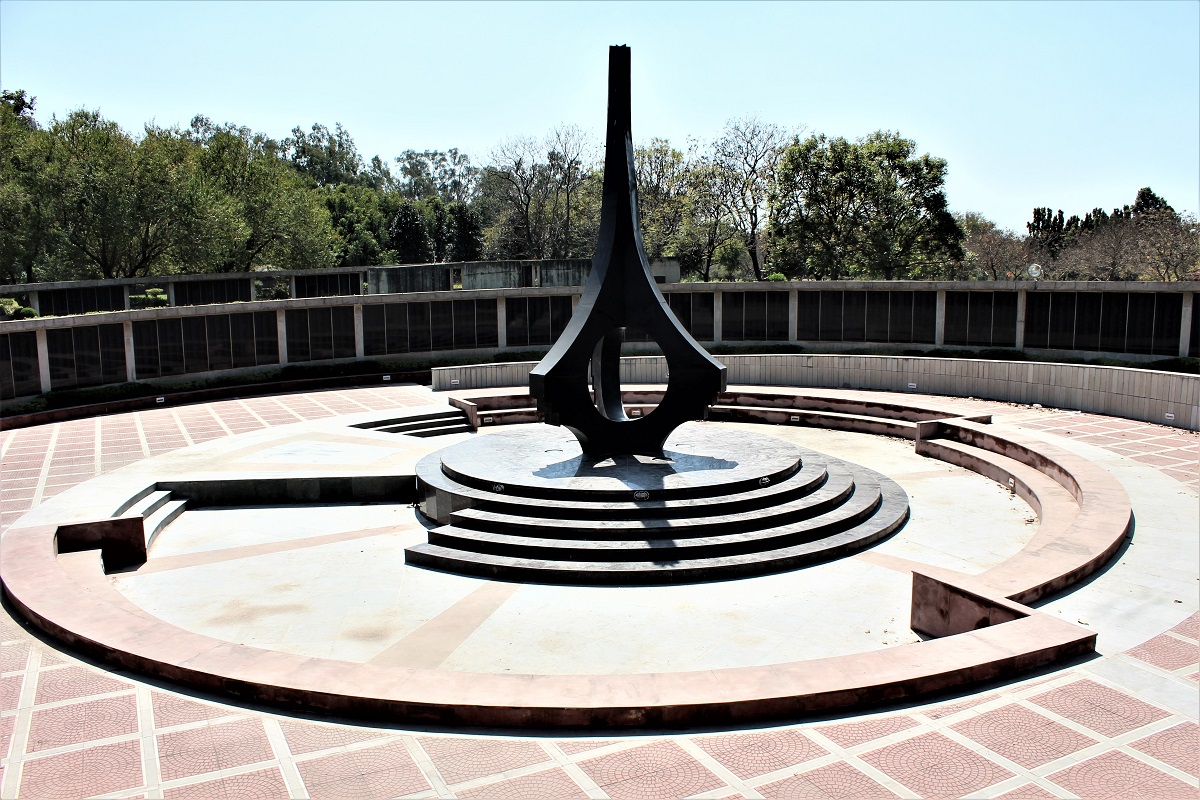 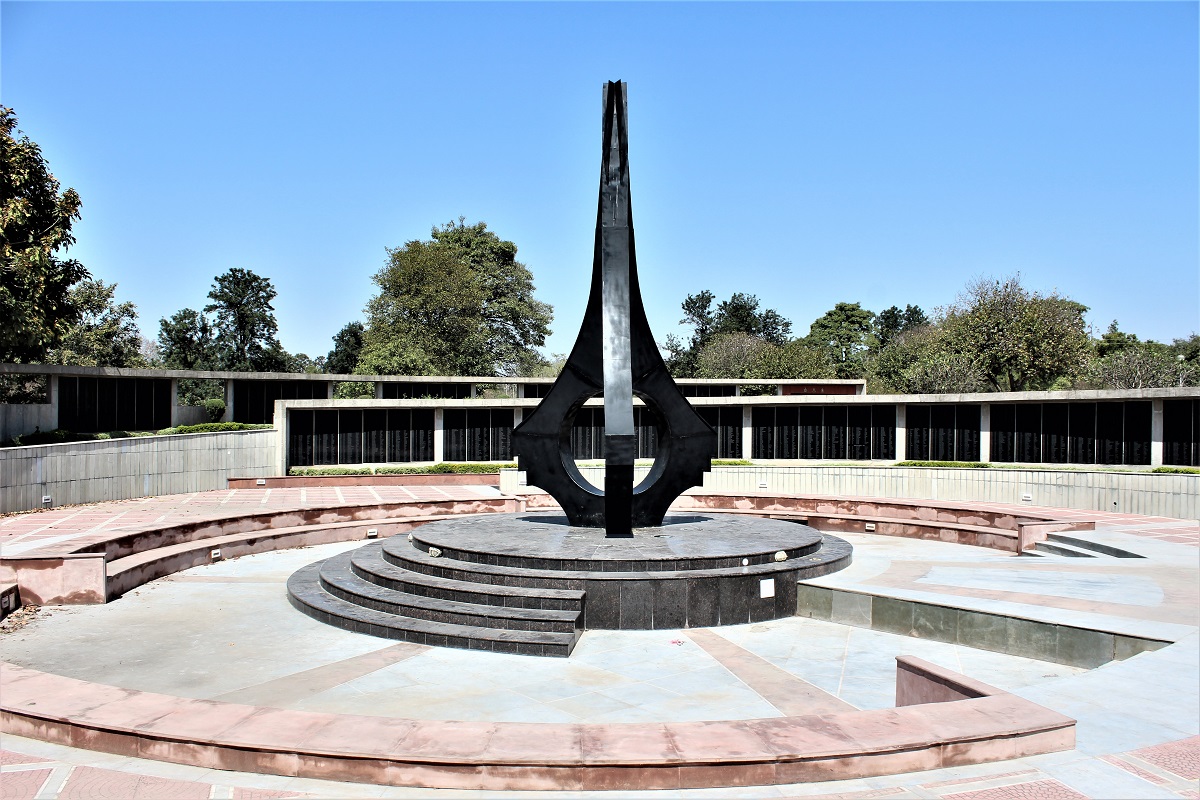 Keeping in view these constraints, the memorial has been planned as a subterranean facility. The major portion of the memorial which comprises an oval-shaped arena has been kept six feet below the natural ground level around it. The built-form of the memorial thus hinders in no way the visual continuity of the Leisure Valley, the Capitol Complex, and the Shivalik Hills on the north-east. 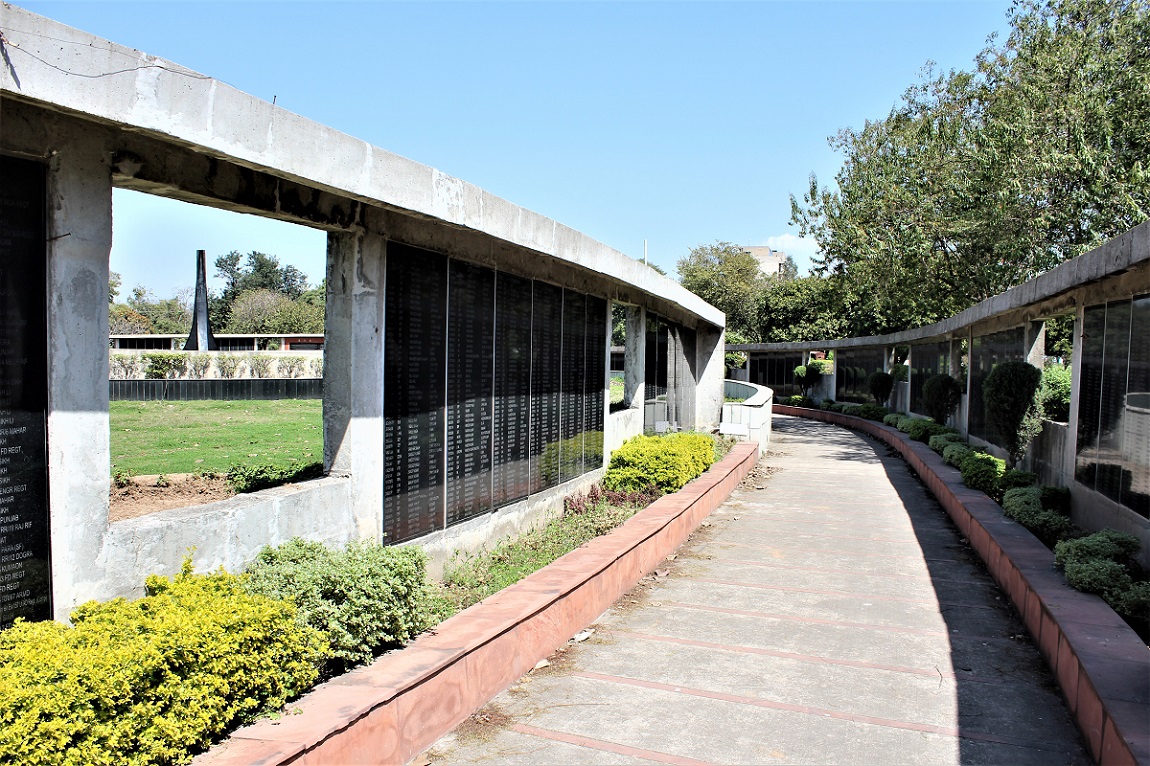 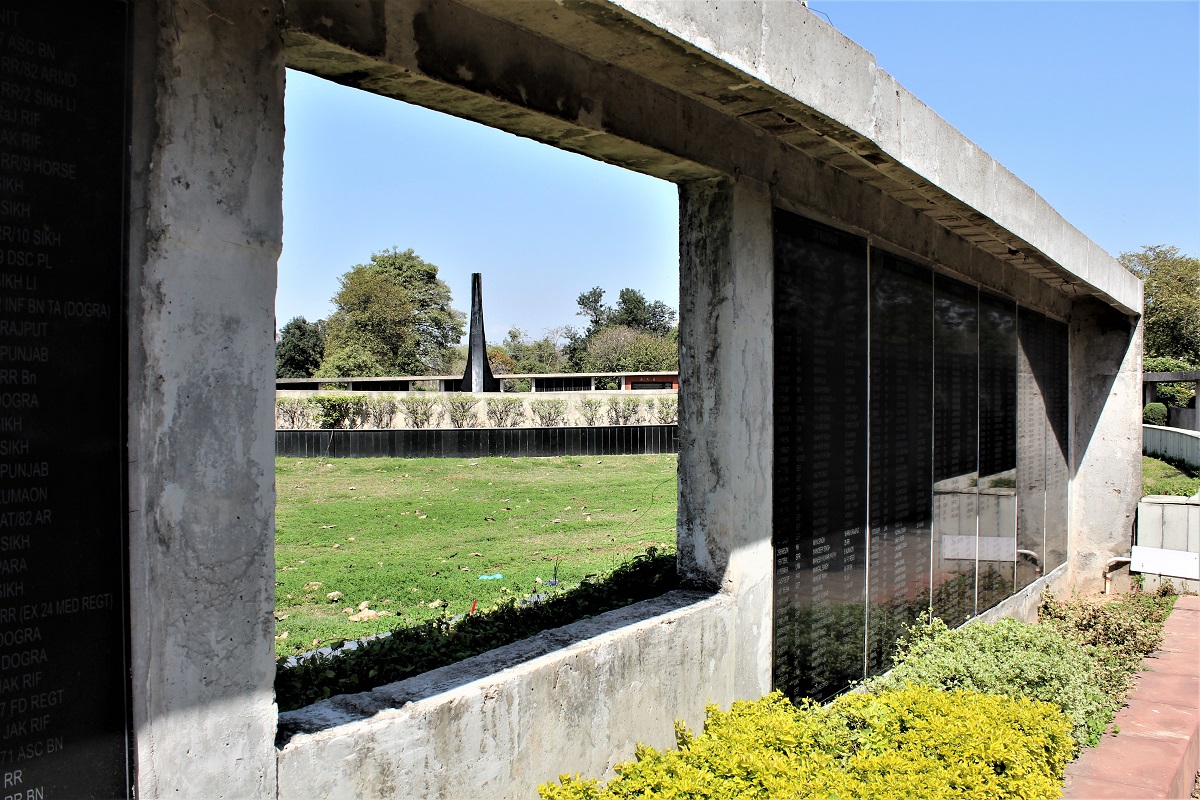 The plan of the memorial resembles a spiral galaxy with two spiral arms emanating from the central oval-shaped arena. One of these arms which falls on the north-east towards the Capitol Complex has been planned as an entrance promenade. The other arm which extends towards the south-west has been developed as an exit. The shape of the plan is in sync with the organic character of the Bougainvillea Garden. The entrance and exit routes of the memorial merge rhythmically and harmoniously with the existing pathways of the Bougainvillea Garden. 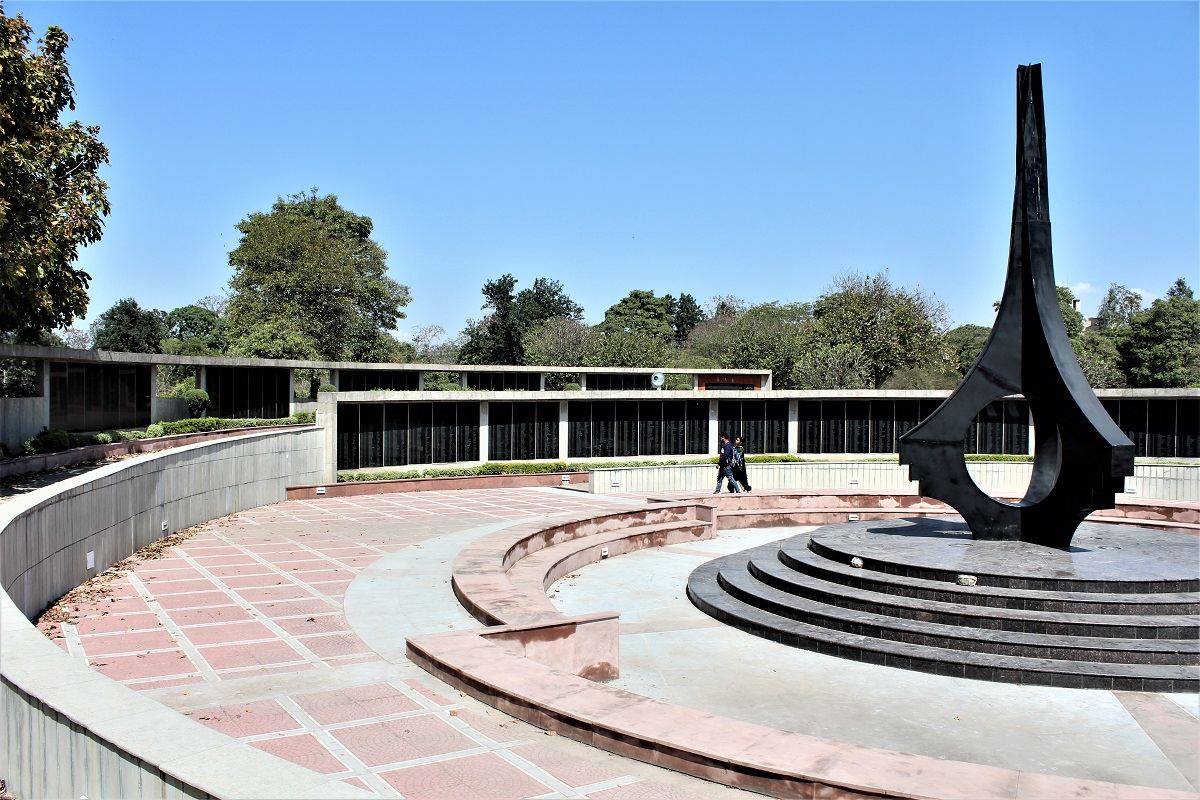 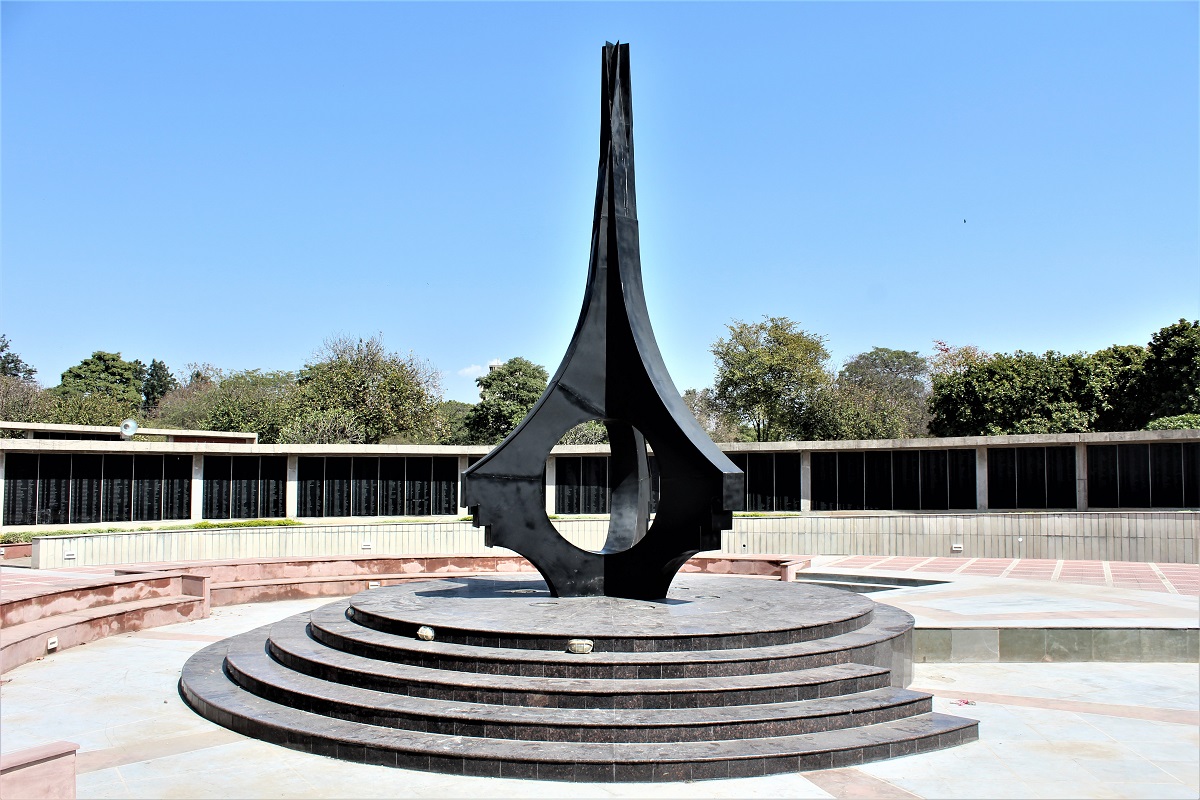 The sunken arena which is the heart of the memorial comprises a circular podium with a 22-foot-high martyrs’ memorial sculpture. Built-in powder-coated steel sheets with a tubular frame inside, this memorial sculpture has been designed by architect Shams Shaikh who was also responsible for the preparation of working drawings and supervision at site. The martyrs’ memorial sculpture consists of three converging posts, which signify the three armed forces of India that are, the Army, the Navy, and the Air Force which work unitedly for the protection of the country. 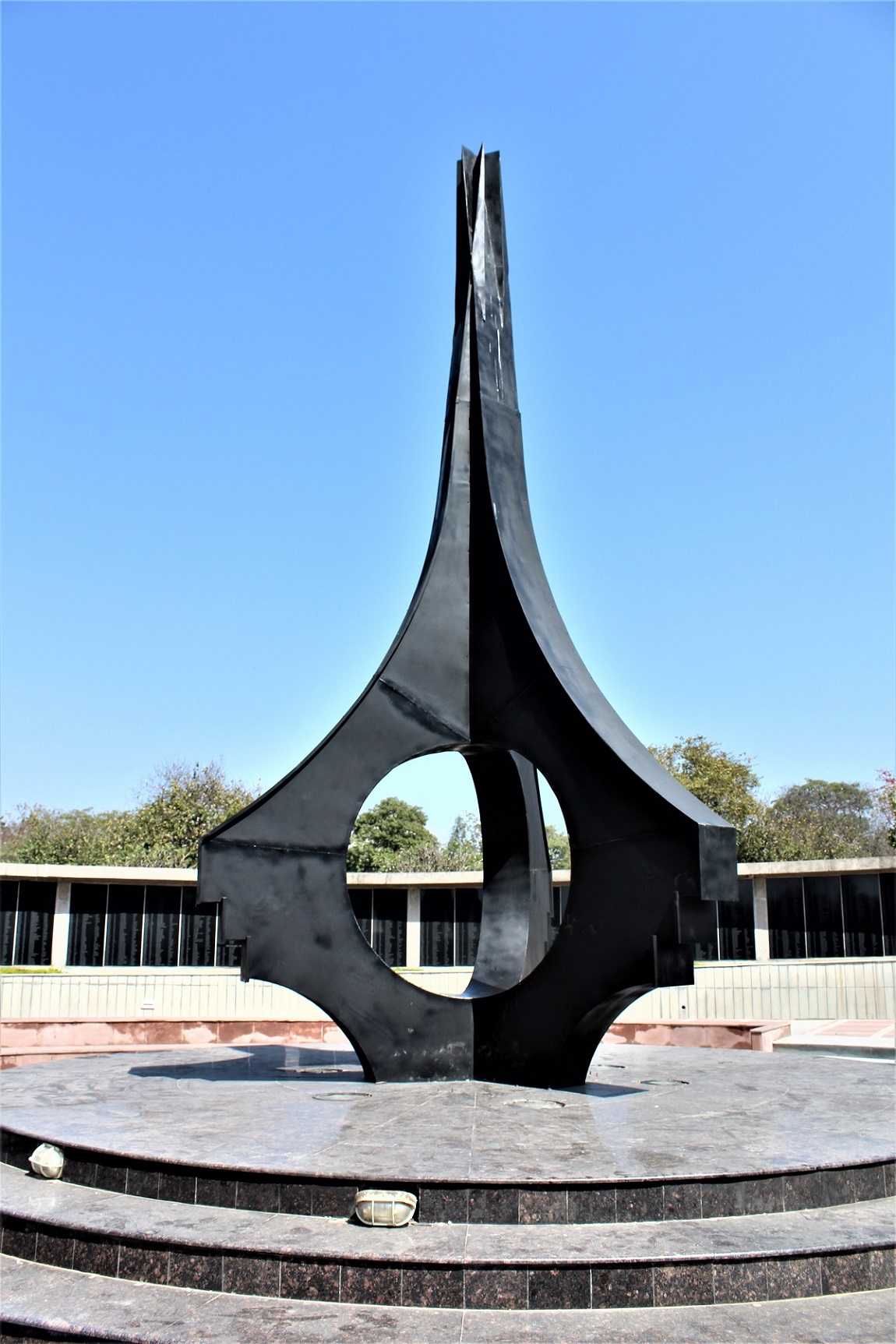 The sunken arena has been encircled by 8-foot-high exposed concrete walls with cladding in black granite stone slabs. On these stone slabs are engraved the names of about 10,500 martyrs from all armed forces who sacrificed their lives in the wars/battles India fought after Independence in 1947. Continuous built-in planters have been provided at the base of the memorial panels which keep the visitors a little away from them. At the top of these panels, a continuous concrete trough has been provided to conceal the source of artificial lights which illuminate the memorial in the evenings. 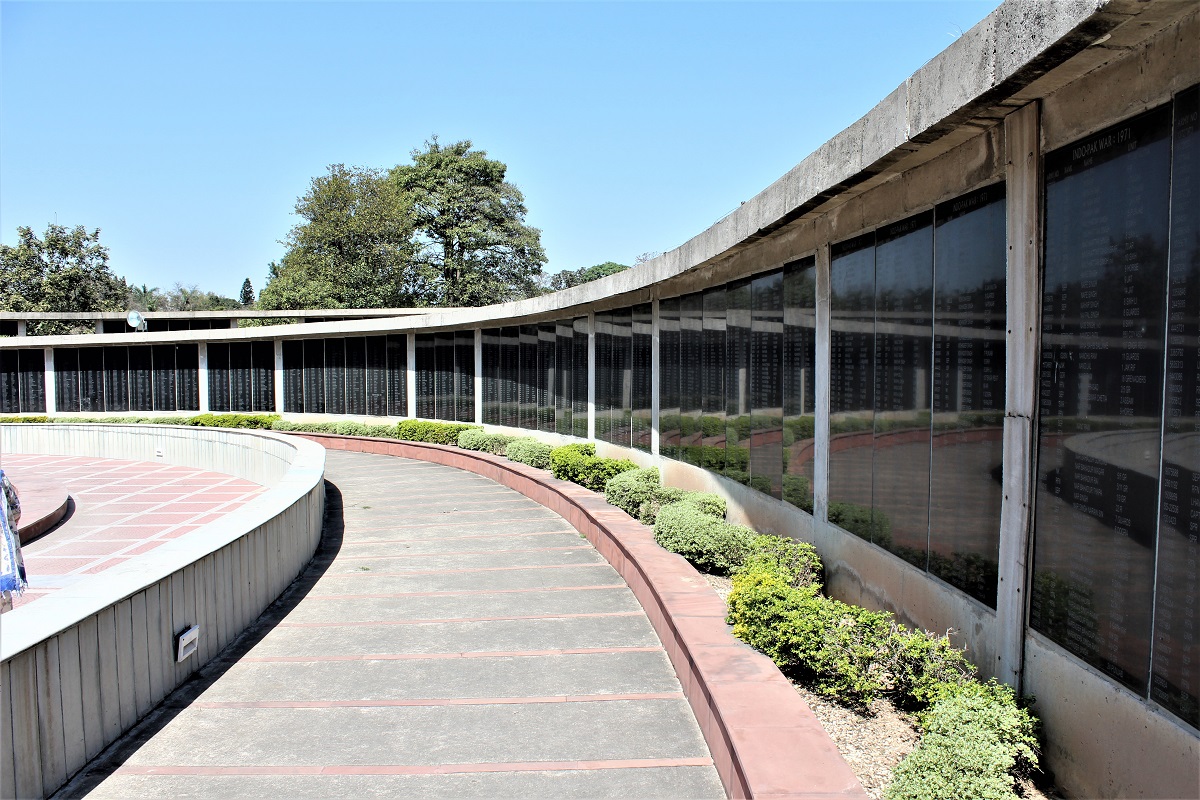 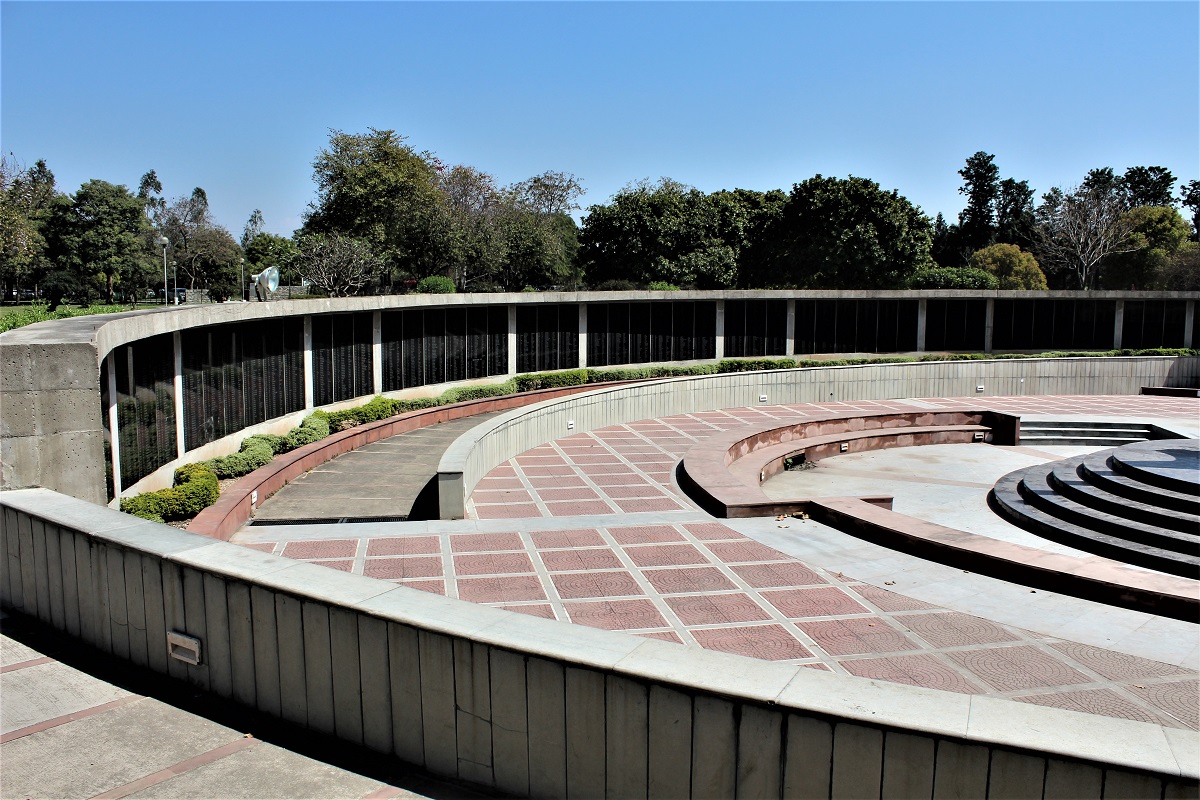 Two ramps provide ingress and egress to the sunken arena. These ramps are also bounded by the black-granite memorial panels. Wide openings have been provided in the concrete walls supporting memorial panels as these come out of the ground level. These apertures provide the much-desired porosity and visual continuity in the otherwise low-lying structure which merges well with the garden around. 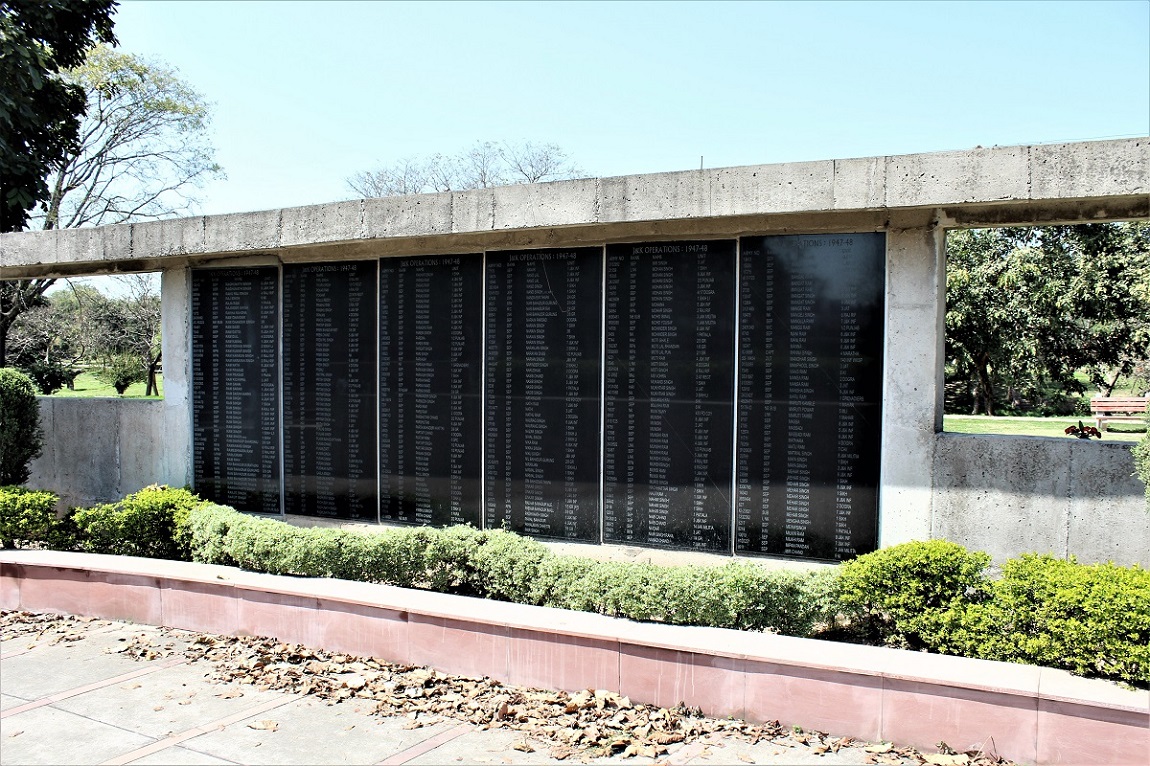 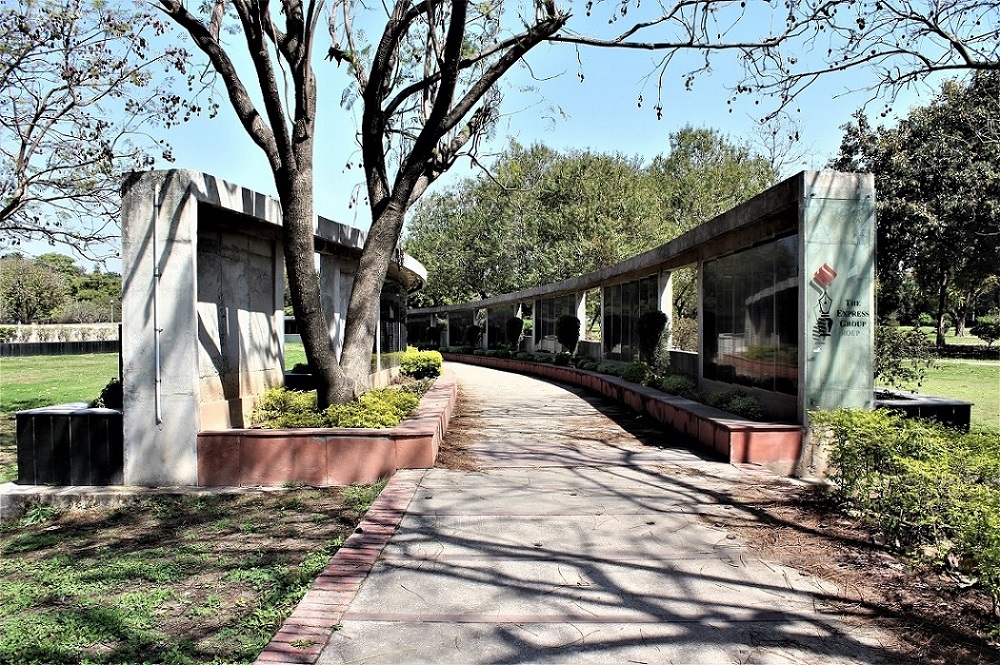 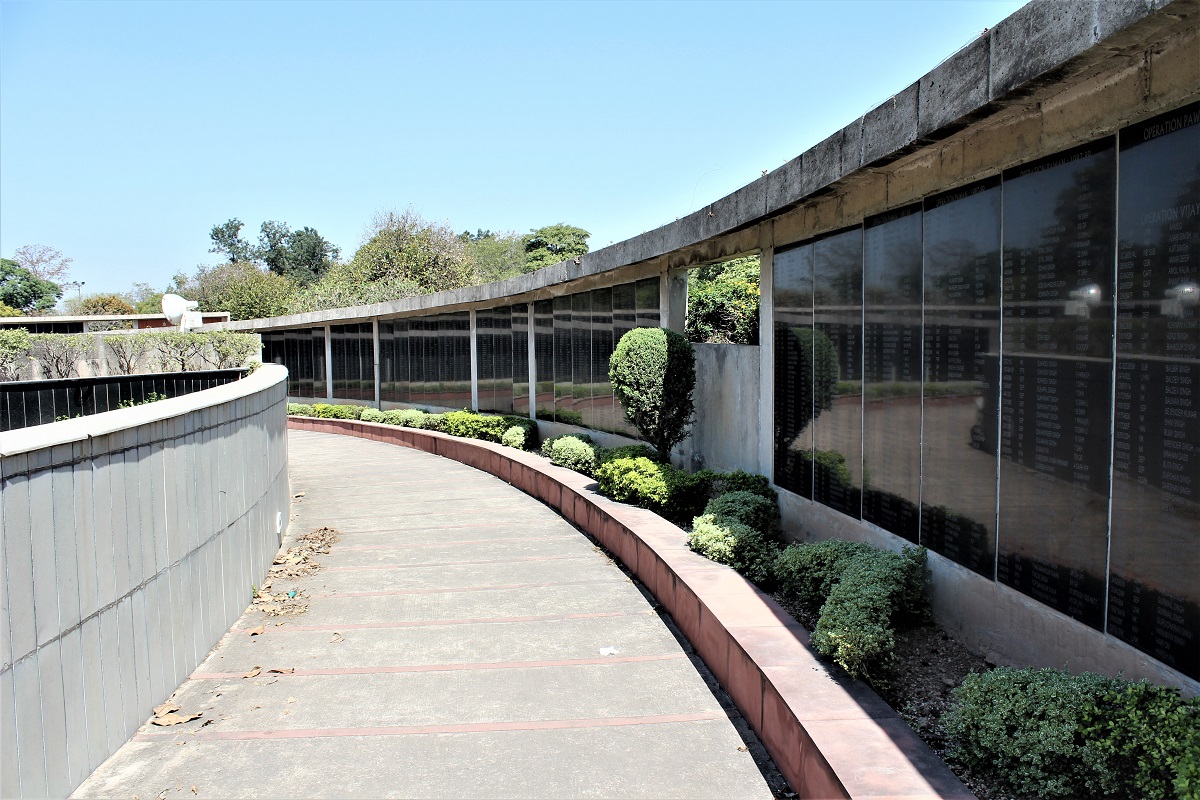 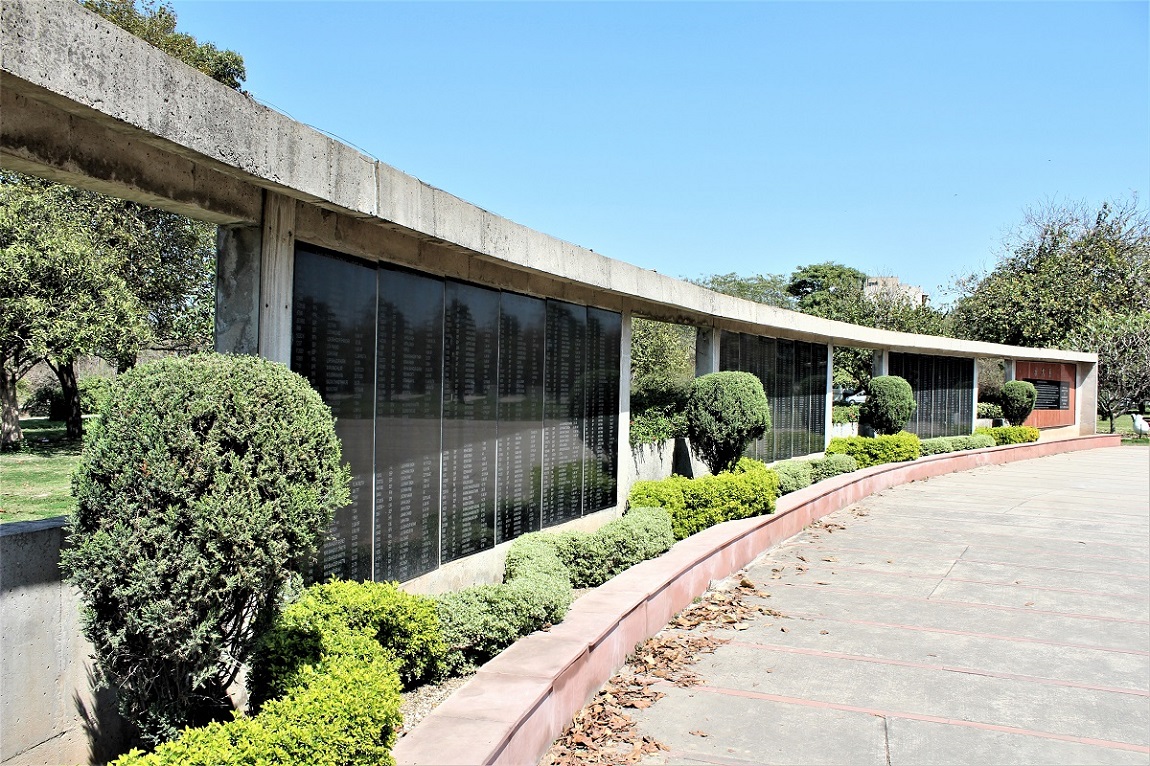 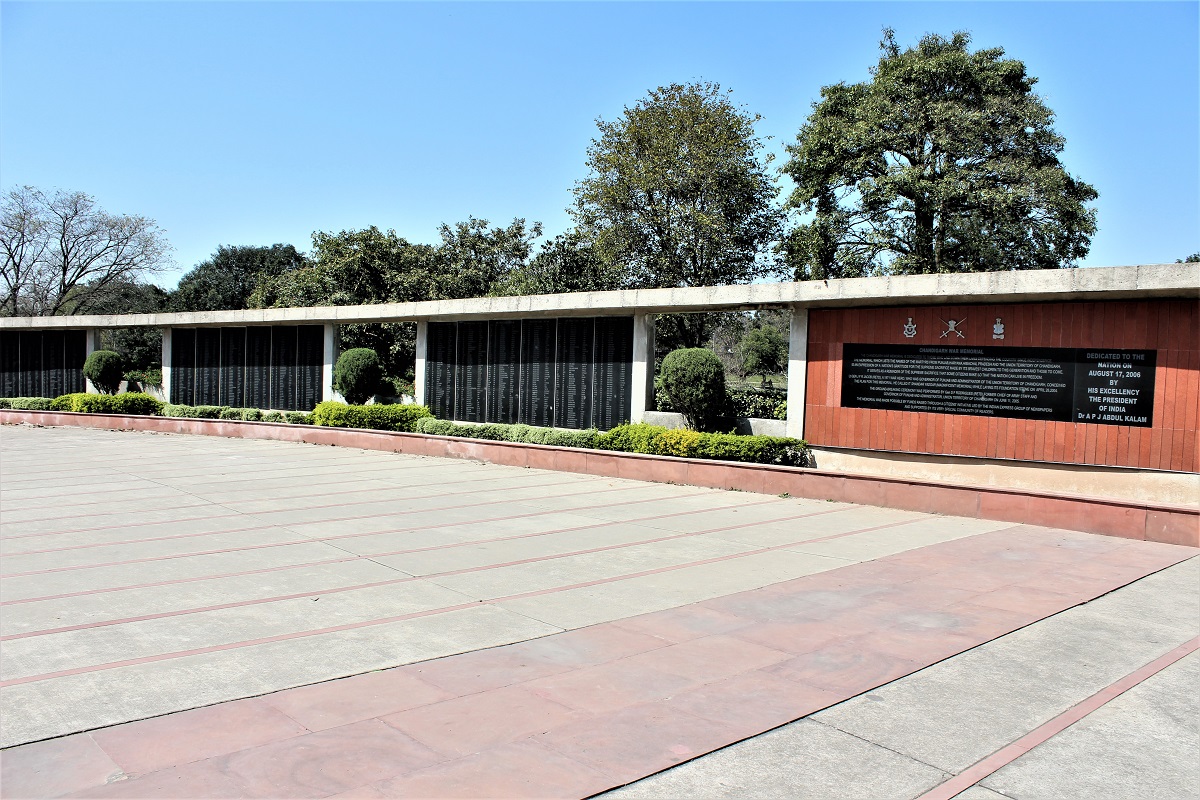 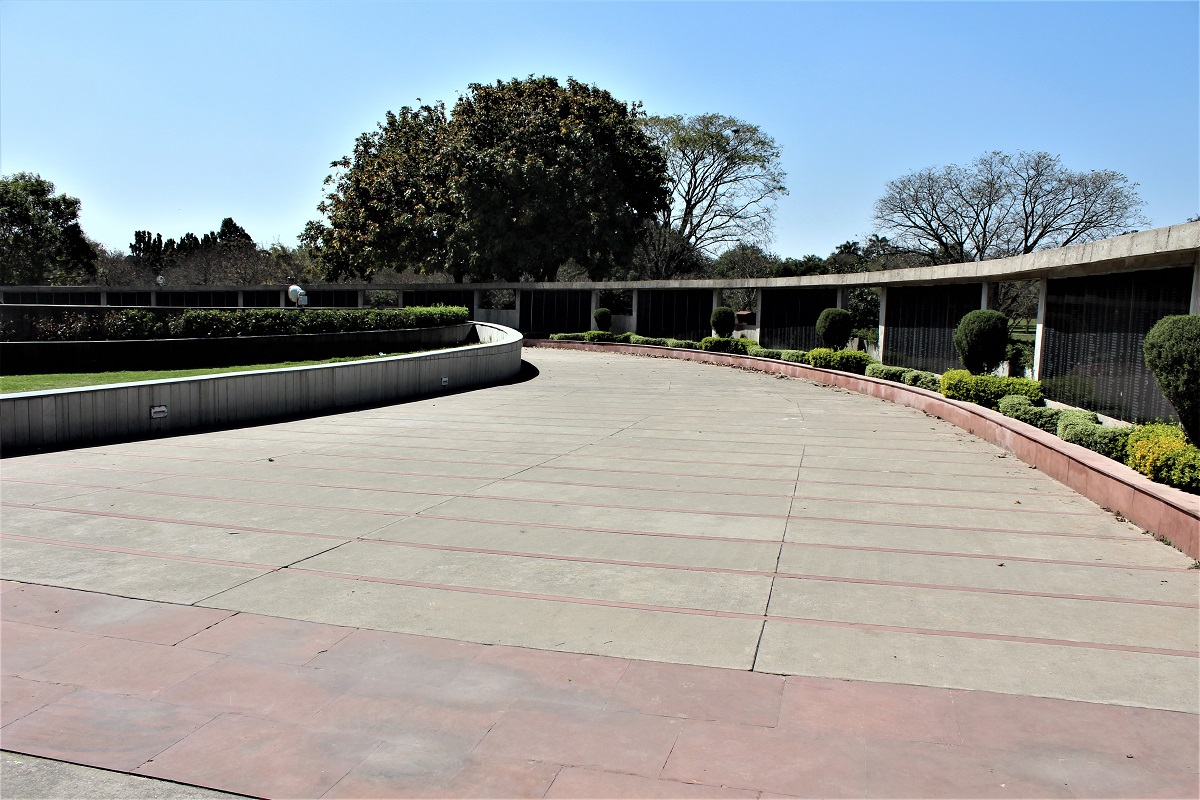 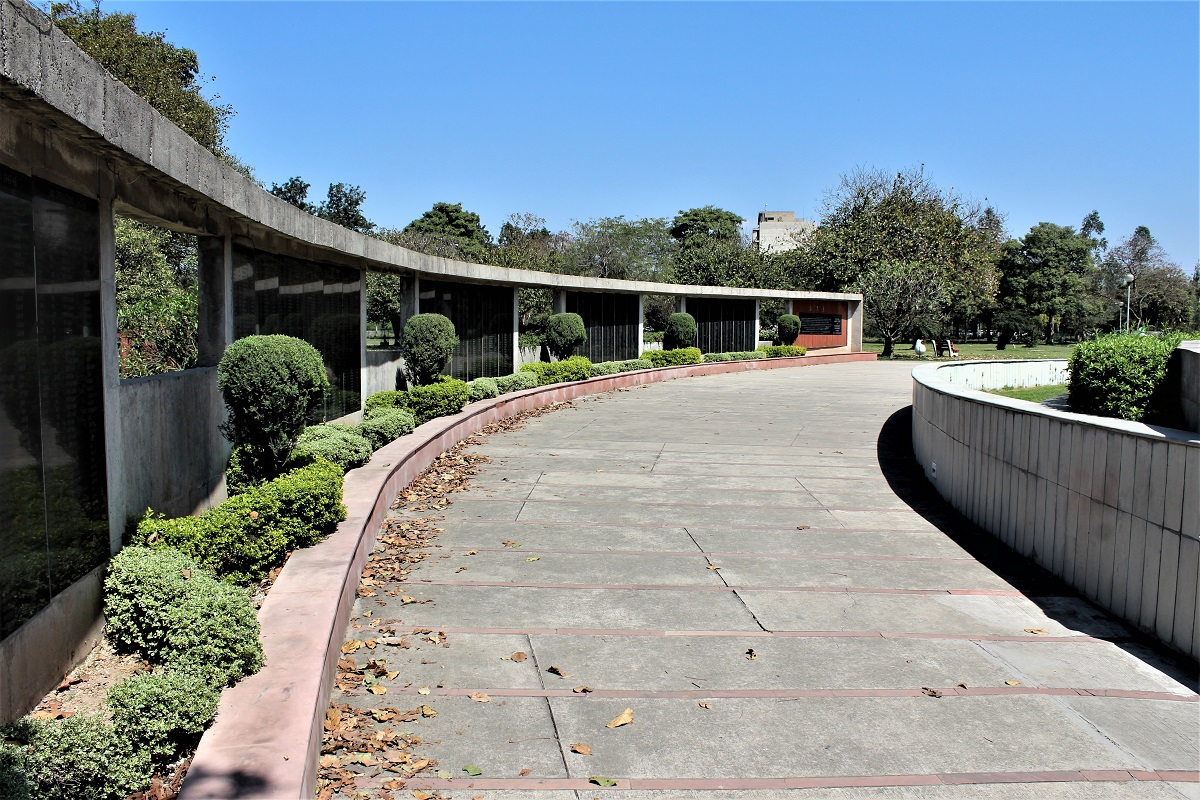 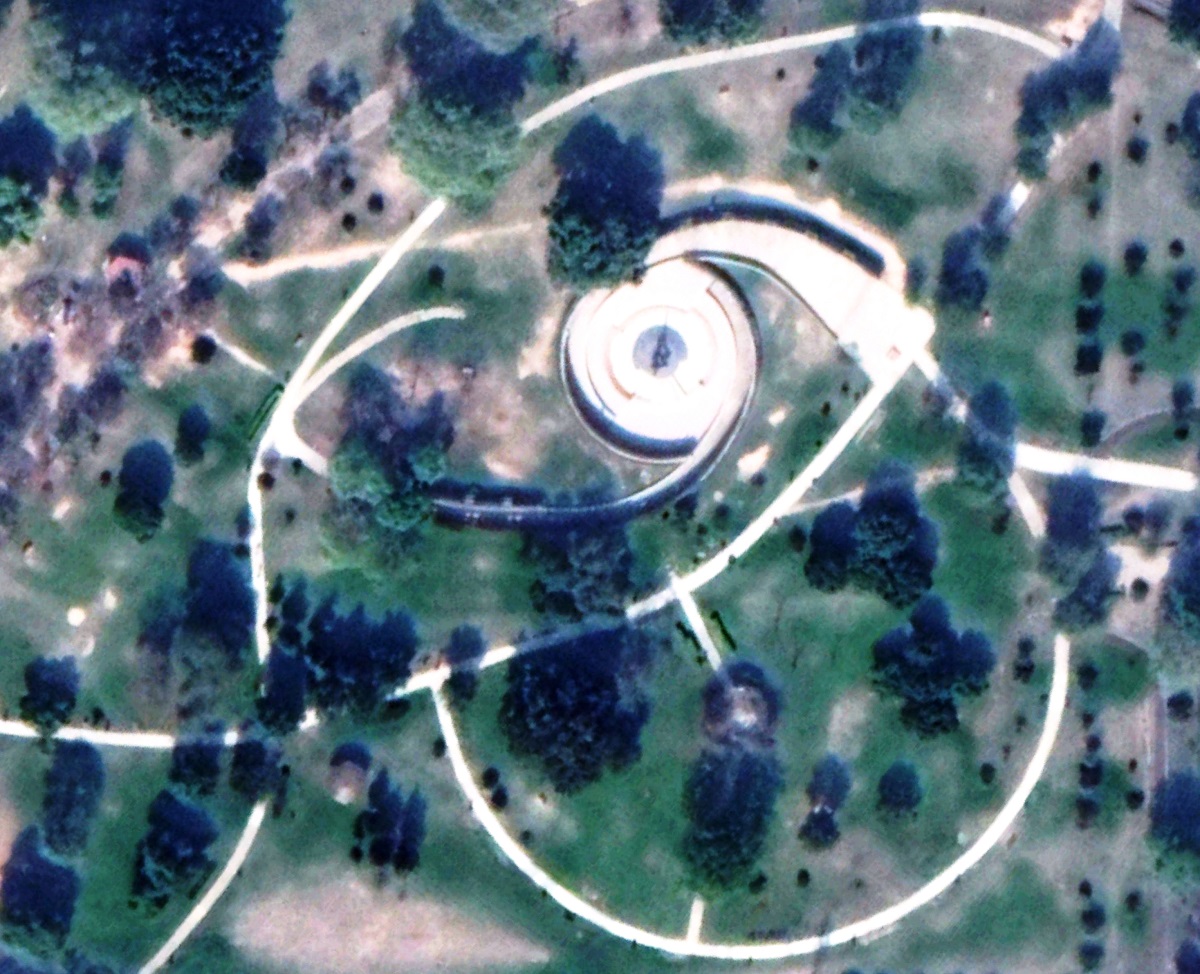 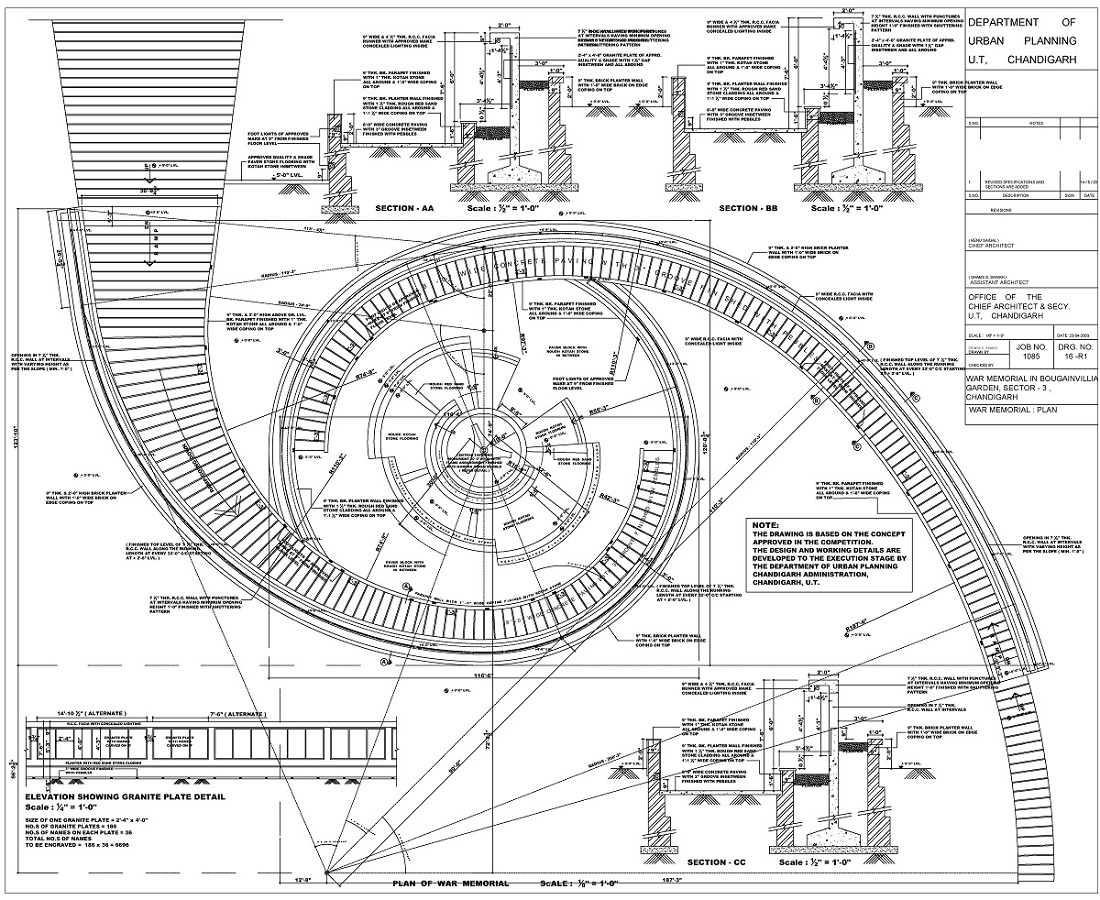 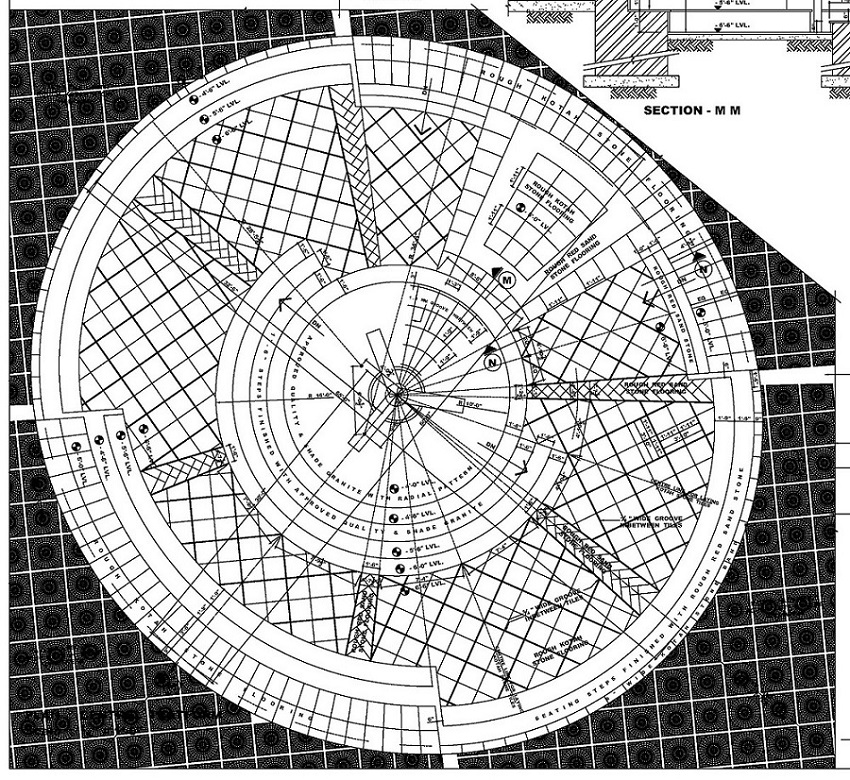 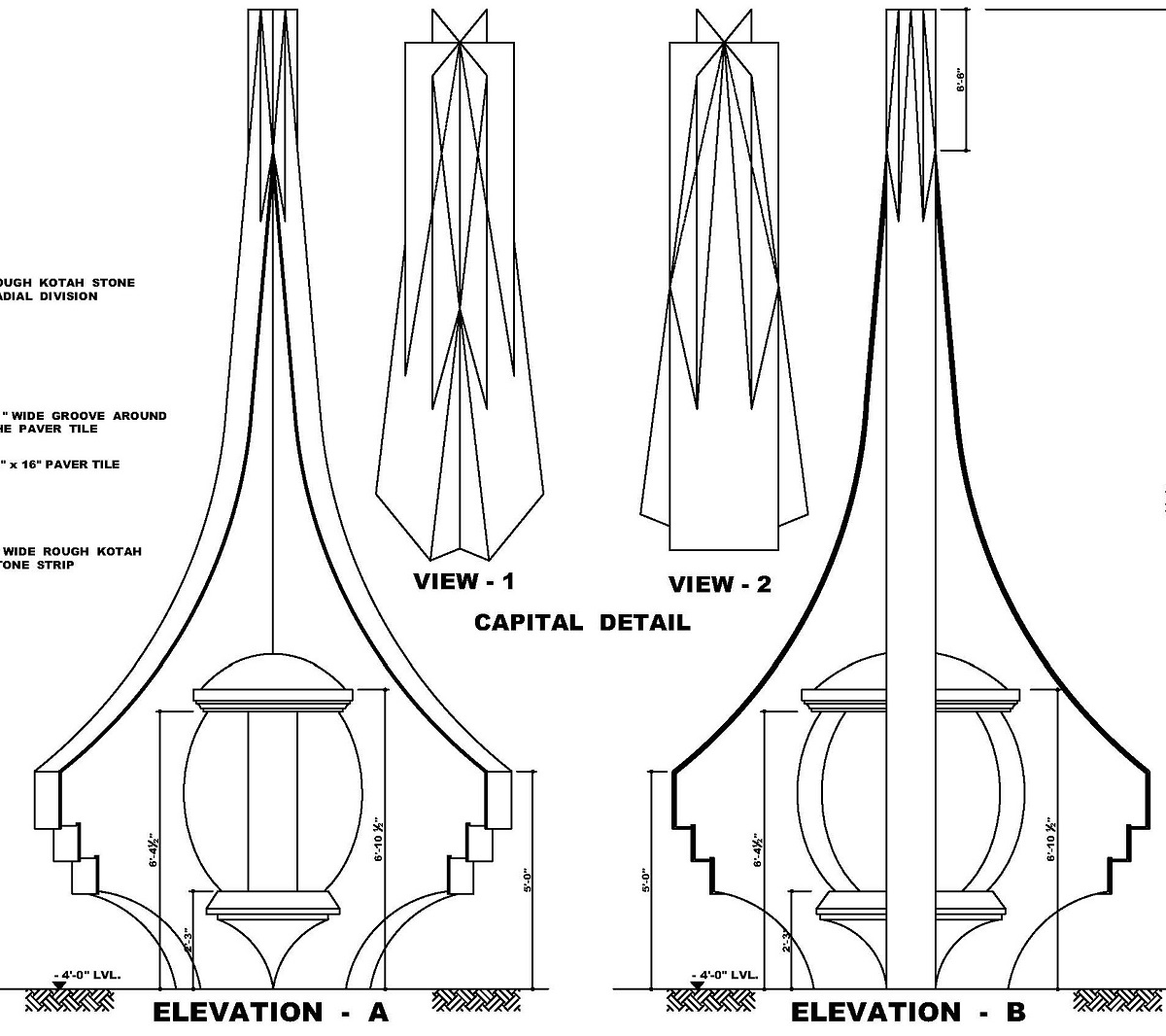 All photos © Sarbjit Bahga except where mentioned.

All drawings courtesy of the Department of Urban Planning, Chandigarh Administration.

> via inputs from the Department of Urban Planning, Chandigarh Administration.