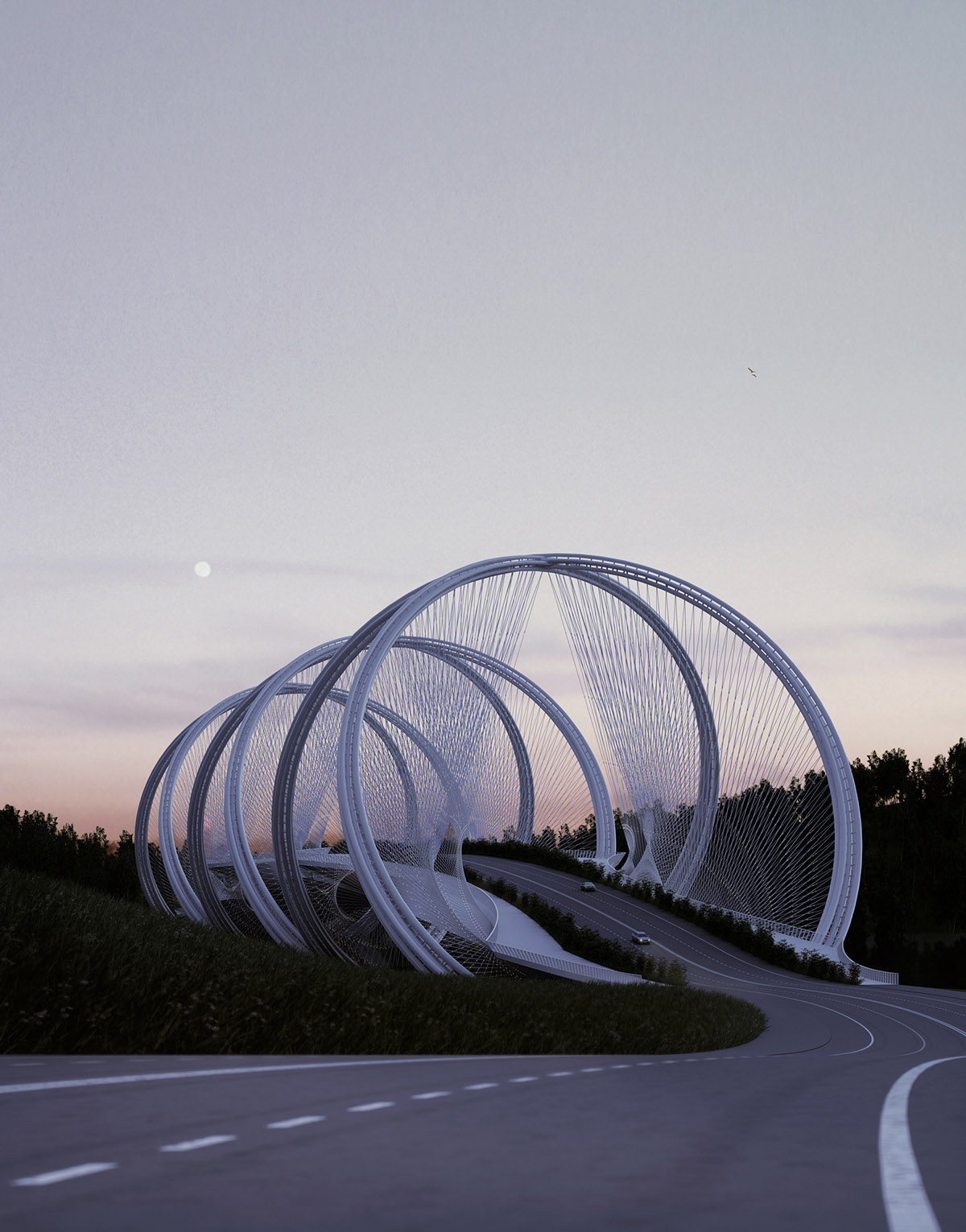 Penda has proposed a mountainous giant bridge for the Olympic Winter Games 2022 in Beijing, which is made up of structural prestressed double-helix arches. Teamed up with Arup for structural consultant and development of the project, the 'San Shan Bridge' is a conjunction of its undulating surrounding and the meaning of the Olympic symbol, which consists of five interlaced rings of equal dimensions. A union of the five continents is represented within the rings. 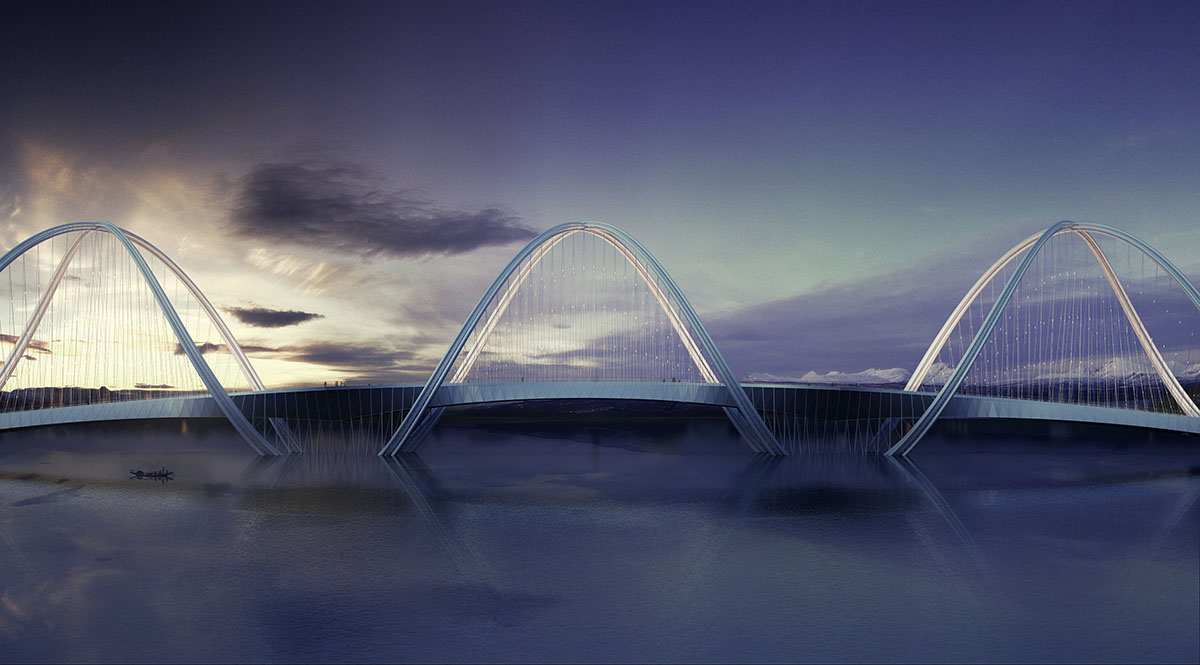 The main structure of the bridge is conceived as a series of rings, which connect at their highest and lowest points. The rings perform as a main structural element and suspend the bridge deck with steel cables in-between them. ‘Entering the rings’ on the way to the Olympic competitions, should be seen as an contextual icon for the Games. 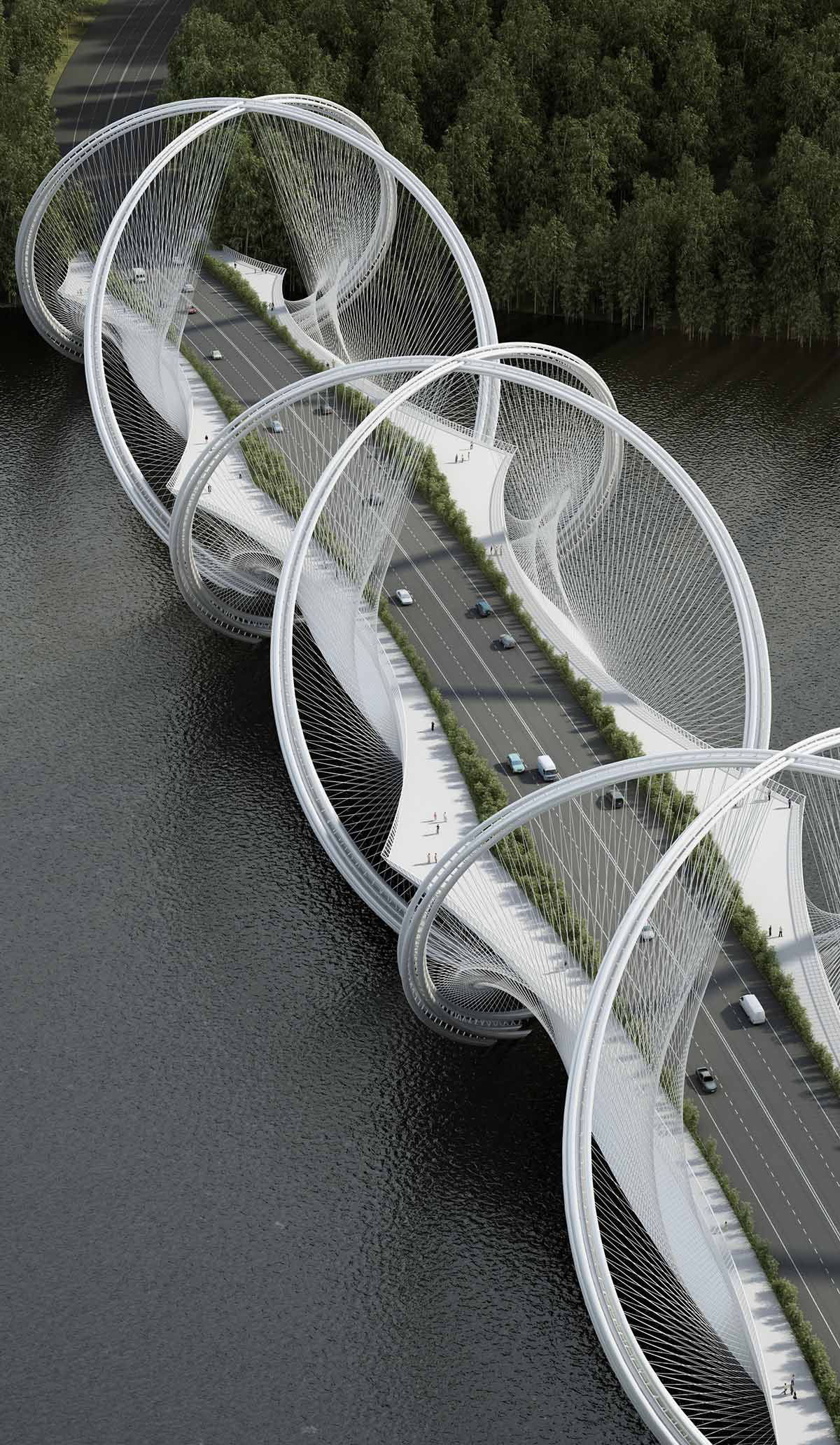 From its side, the bridge is seen as a sequence of mountains and valleys and is in an harmonious dialog with its neighbouring green hillsides, blurring the manmade structure with the natural surrounding. Seen from the top, the bridge connects the two shores of Gui River through a DNA string-like dual helix. Visitors of the Olympic Games, who are approaching the river are introduced to a multifaceted icon that changes its appearance based on ones perspective towards the bridge. 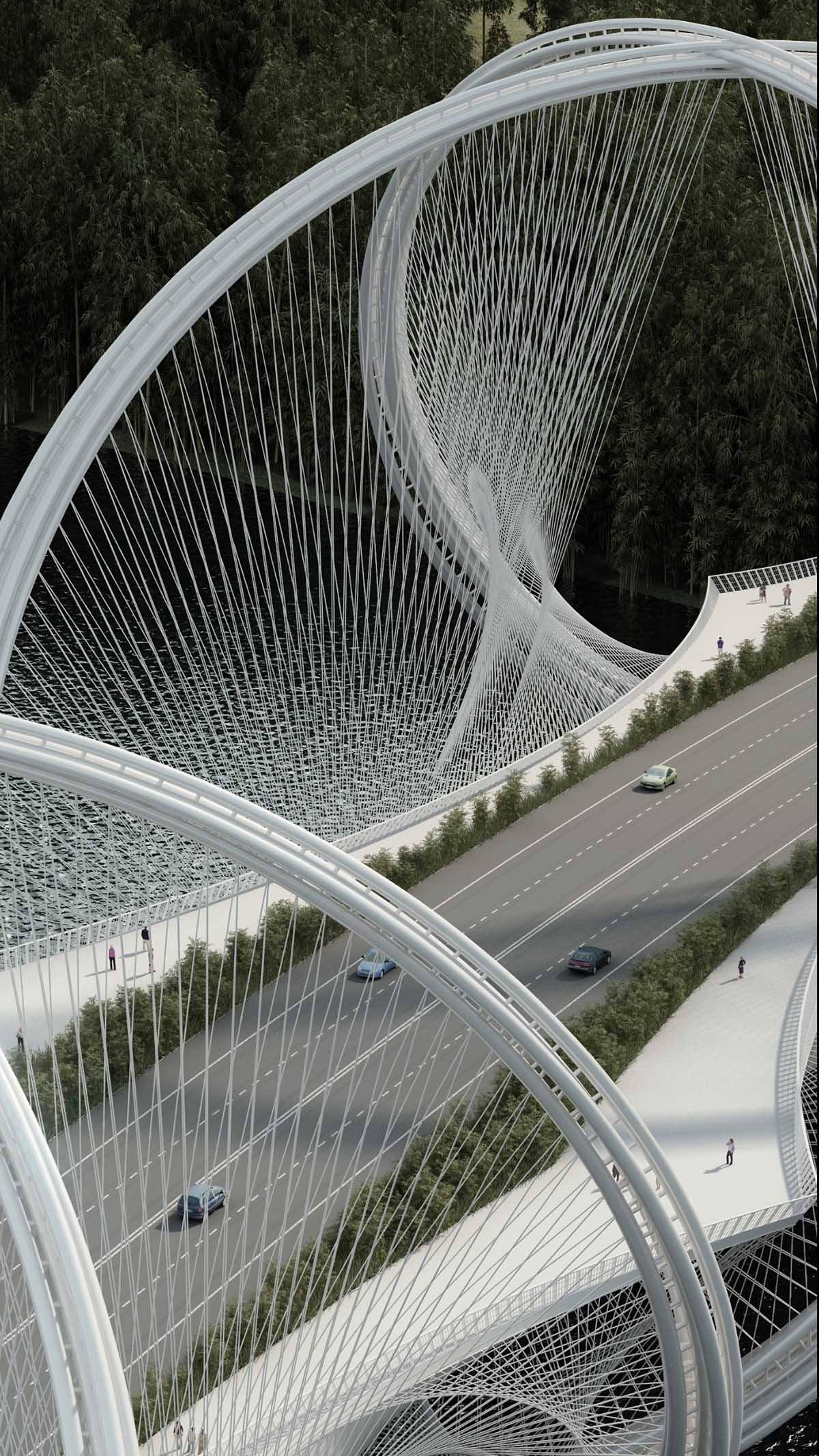 The structure of San Shan Bridge connects the shores of Gui River through a 452 meter long bridge deck and is divided in three sets of cross-connected arch-like steel structures with a maximum span of 95 Meters. The sequence of arches form a prestressed double- helix, which intersects and supports each other on their bottom and top. The helix is designed and engineered to be as slender as possible and positioned to offer the best structural performance. 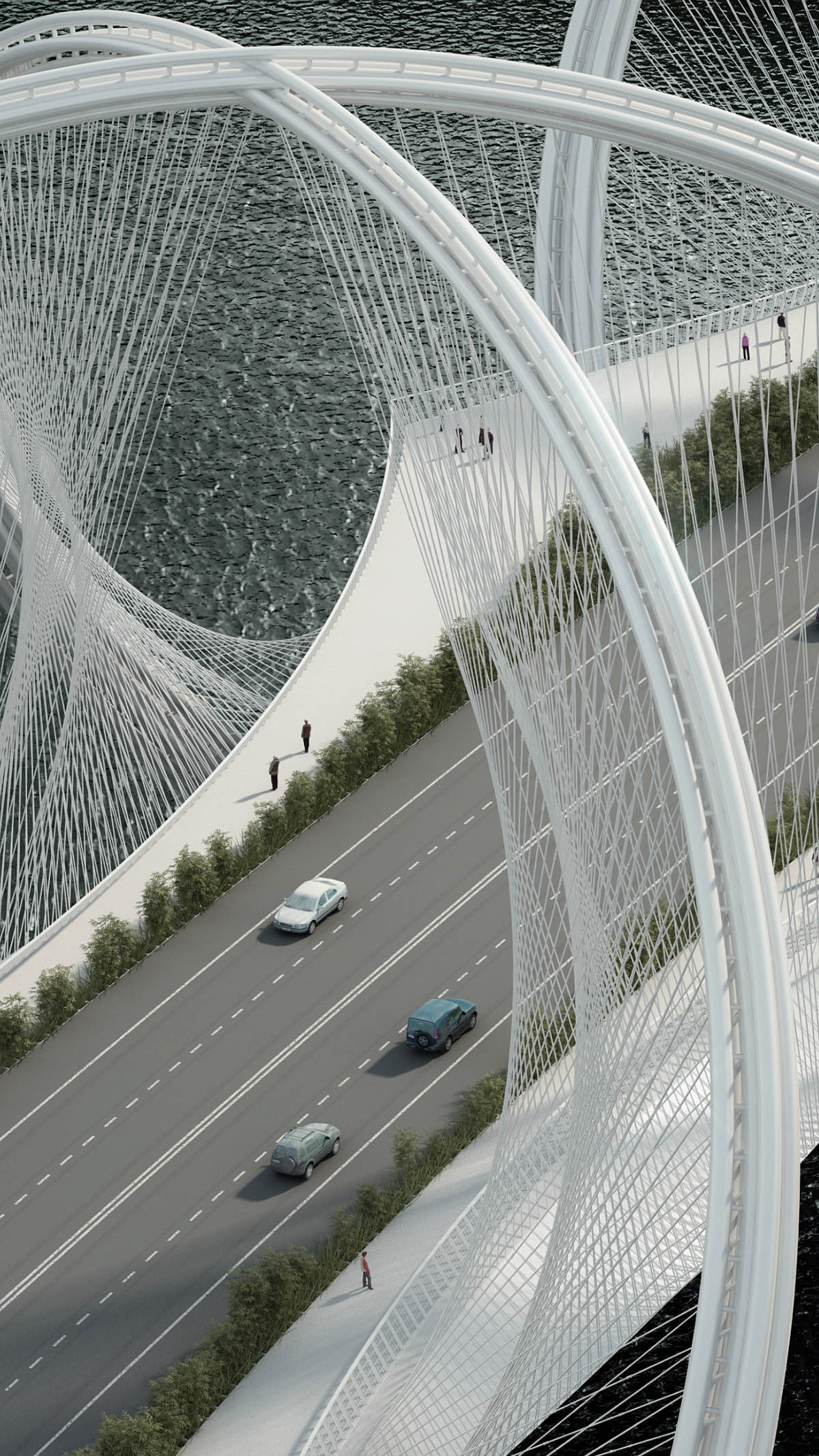 The bridge deck is suspended from the structure by high-strength steel-cables, that connect to the arches in a cross-weaving way. Similar than a structure of a rollercoaster, the form of the spatial arch is built from tubular stainless-steel struts and strong in lateral resistance through its connections. Each member of the arch is composed of five steel tubes that are connected by batten plates and carry the loads to its solid foundation platforms. 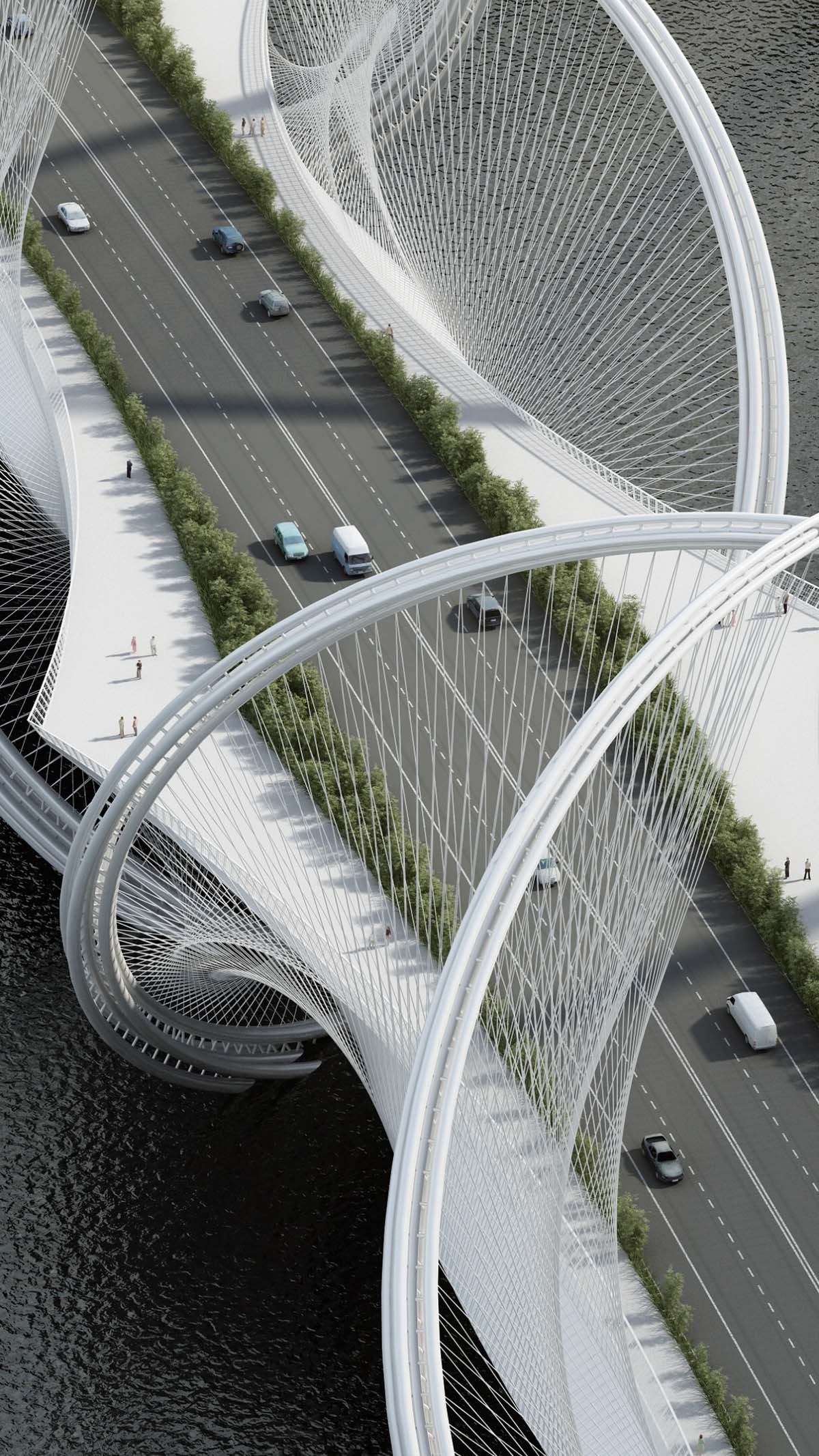 Although each member of the arch is twisted, it is stabilised by the pre-tension of the cable from buckling under compressive loads. The longitudinal stiffness of the bridge is largely enhanced by the cross-connected nature of the cables to resist the dynamic load of the vehicles. The undulated surface formed by the cables define and enclose the interior space of the bridge. Based on its dual helix structure, the bridge utilises 5 times less steel than a conventional box girder bridge. 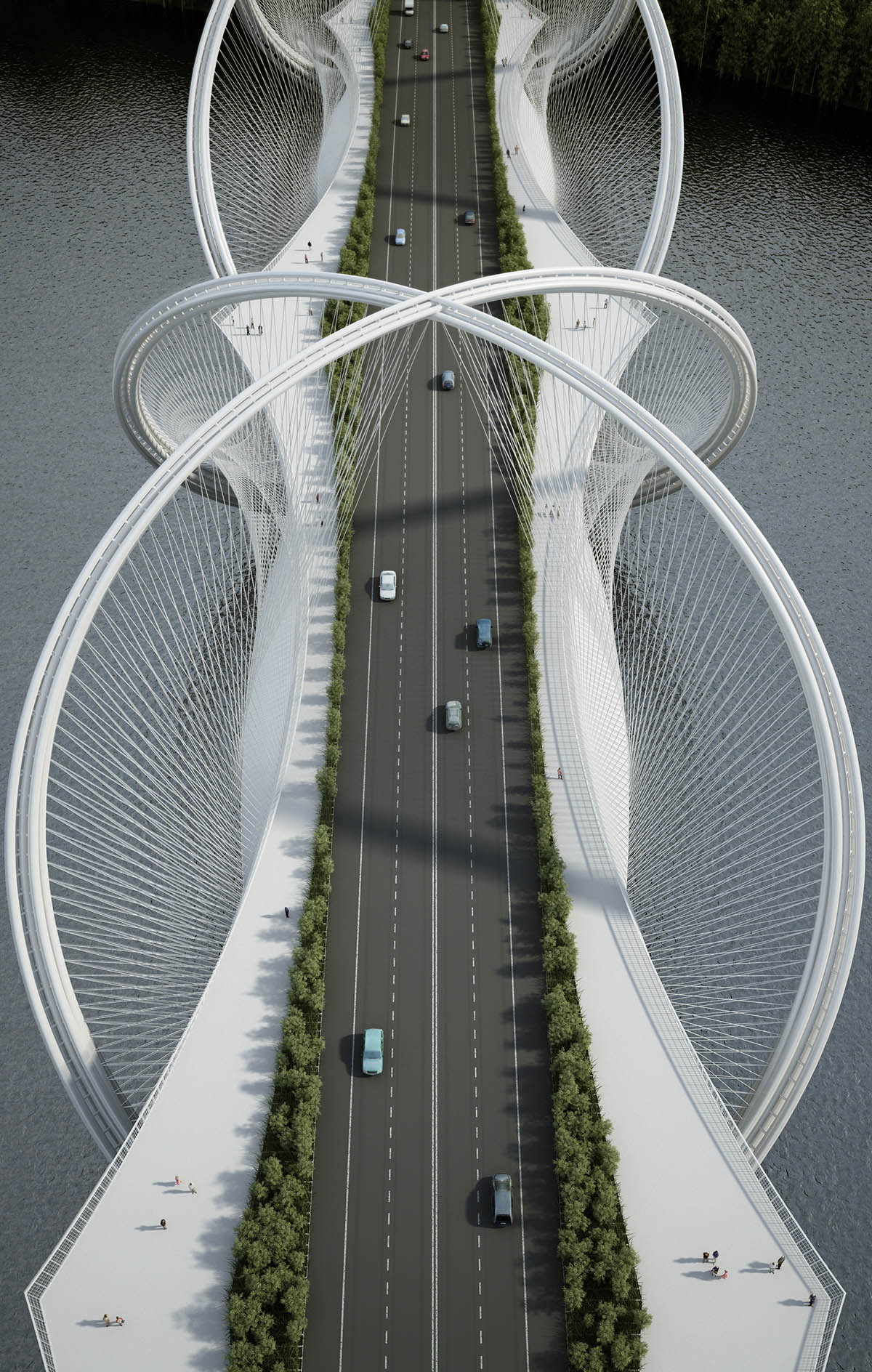 The english translation of “San Shan” is 3 Mountains and describes the form of the bridge seen from the side with its 3 arches connecting to its hilly backdrop. The location for the Bridge is a gateway between the density of the city and the undulating river valleys in the North of Beijing. 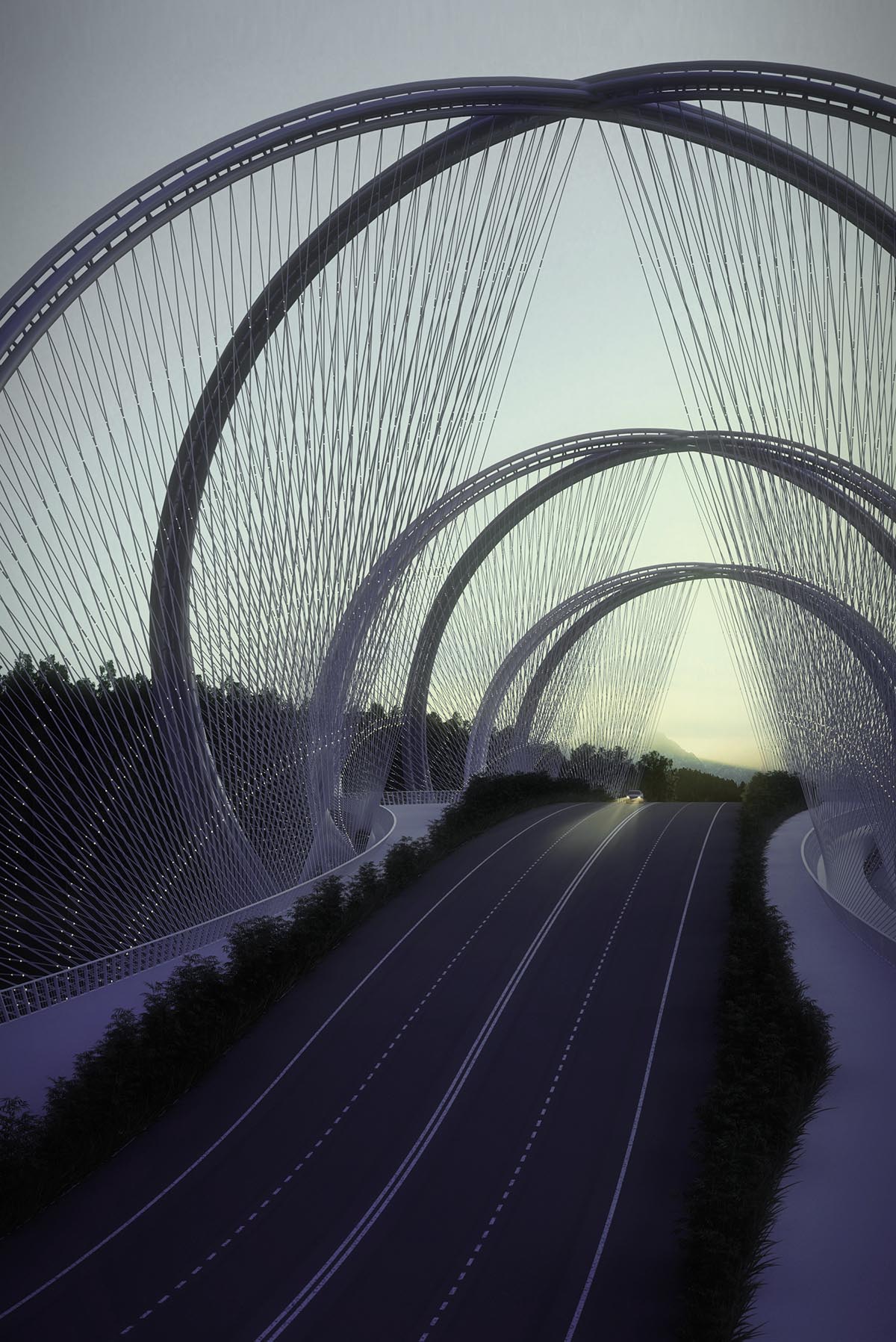 The area around the bridge is rapidly growing in popularity with both residents and tourists as a recreational area. There, the bridge forms an inviting sculpture to a more mountainous scenery on the way to Zhangjiakou, where all major outdoor competitions at the Beijing Olympics are being held. Right next to the San Shan Bridge is an area designated to the Beijing Horticultural Expo 2019. Major developments by international architects will turn this region into an exhibition hub, which afterwards will transform into a get-away, recreational district for the citizens. Connecting all these important locations, the bridge forms an essential public link for a wider Beijing Expansion Masterplan and will formally integrate the new territories into Beijings urban fabric.

The San Shan Bridge is an outcome of a combined effort between Penda as an architect and engineers to streamline a design which is based on a connection of formal principles and structural innovations. Through this shared effort it is possible to design a unique structural form, that can become a symbol for an inviting spirit of the Olympic Games and beyond can promote Beijing’s identity to be globally connected city. 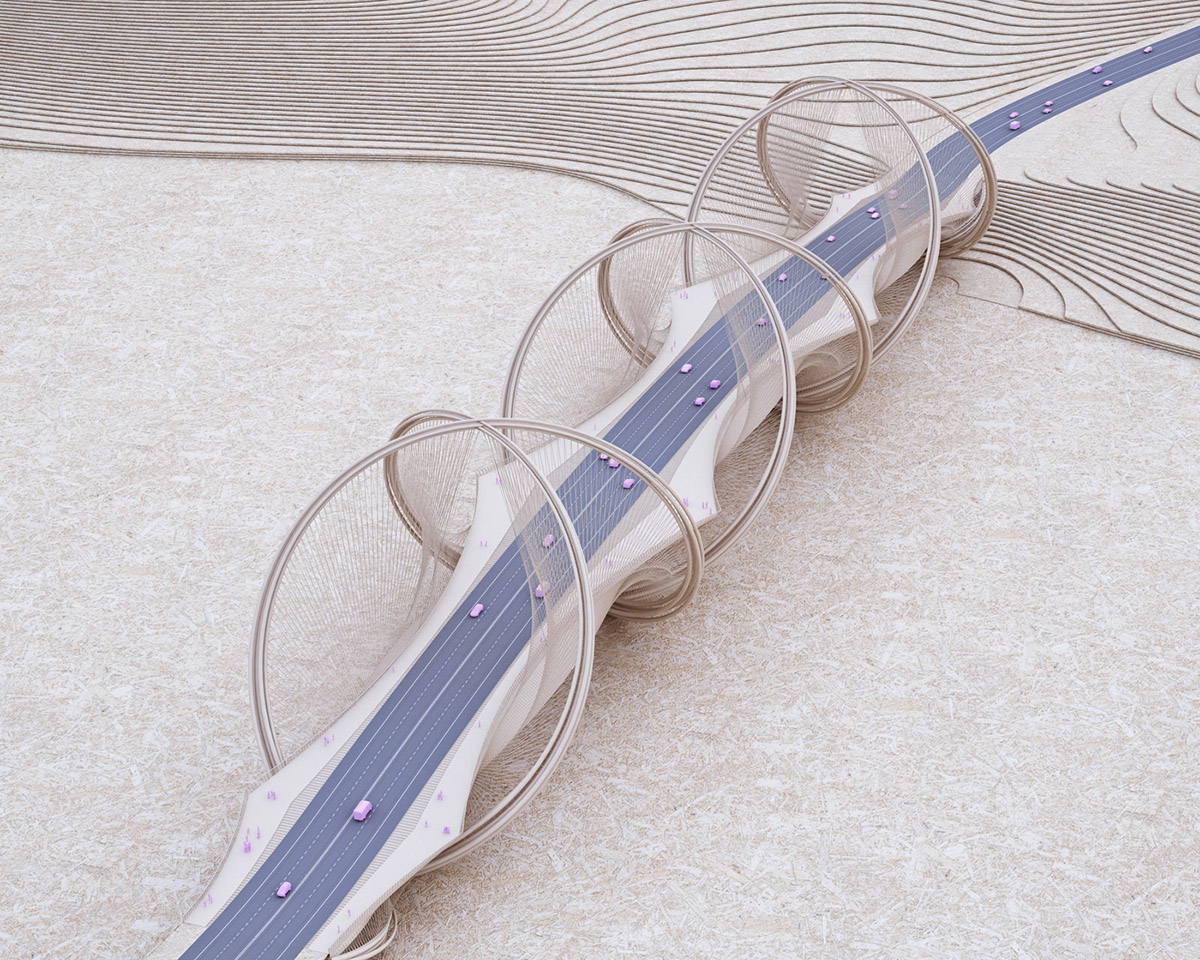 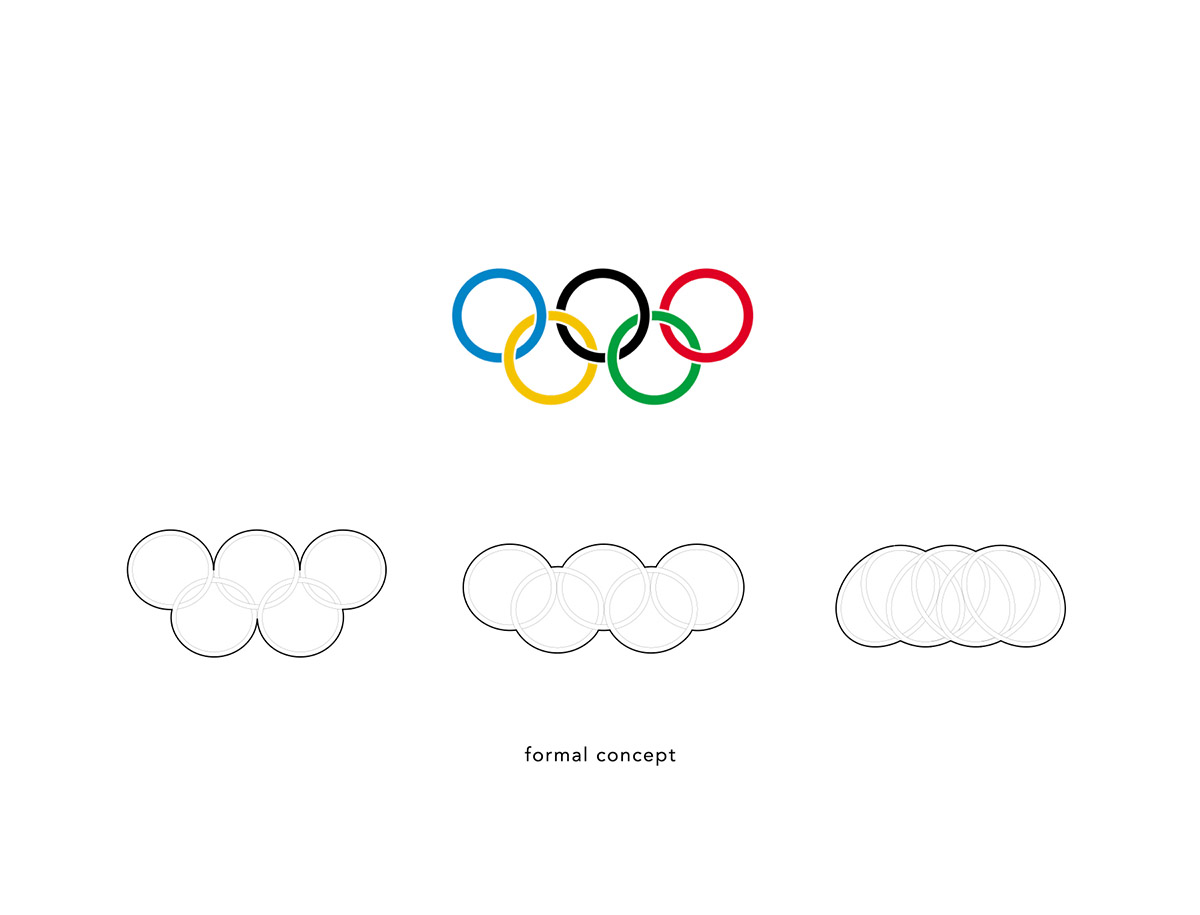 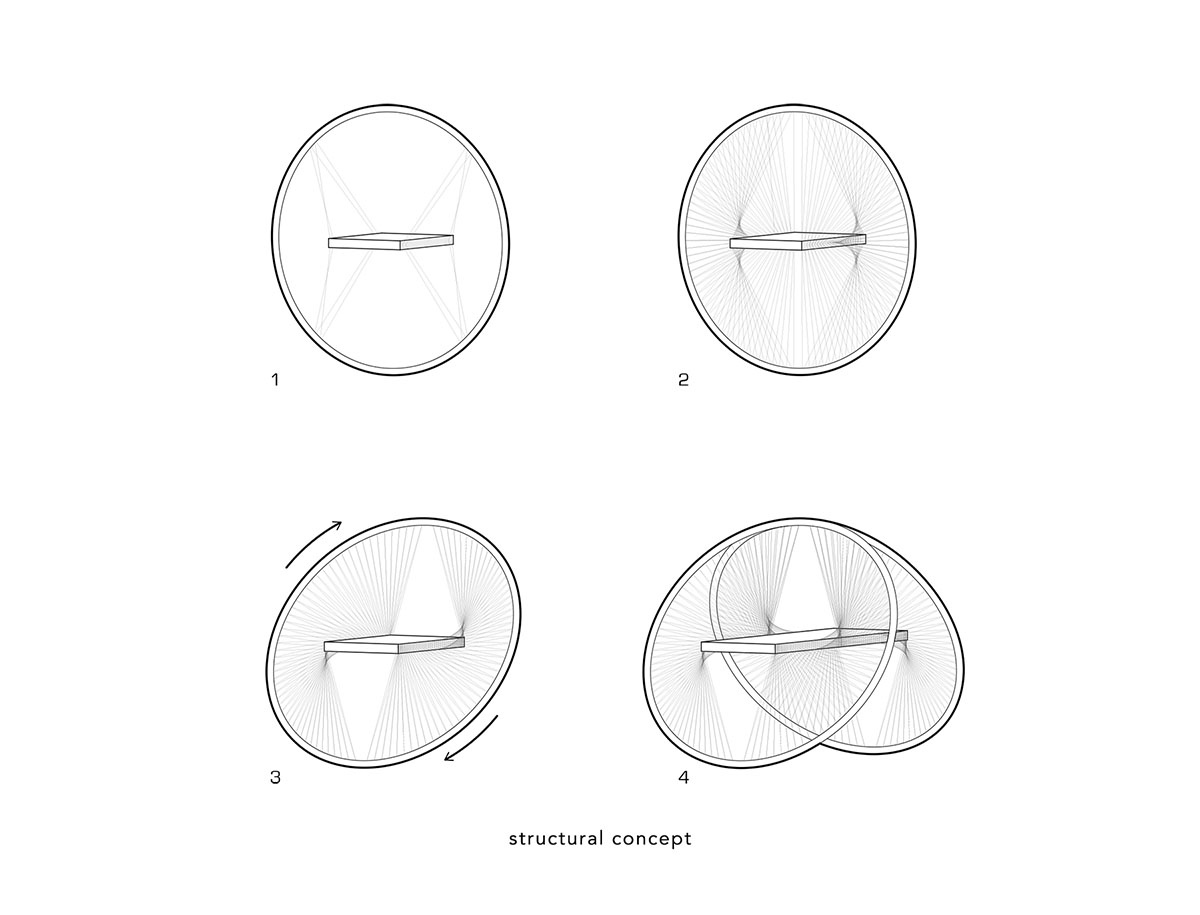 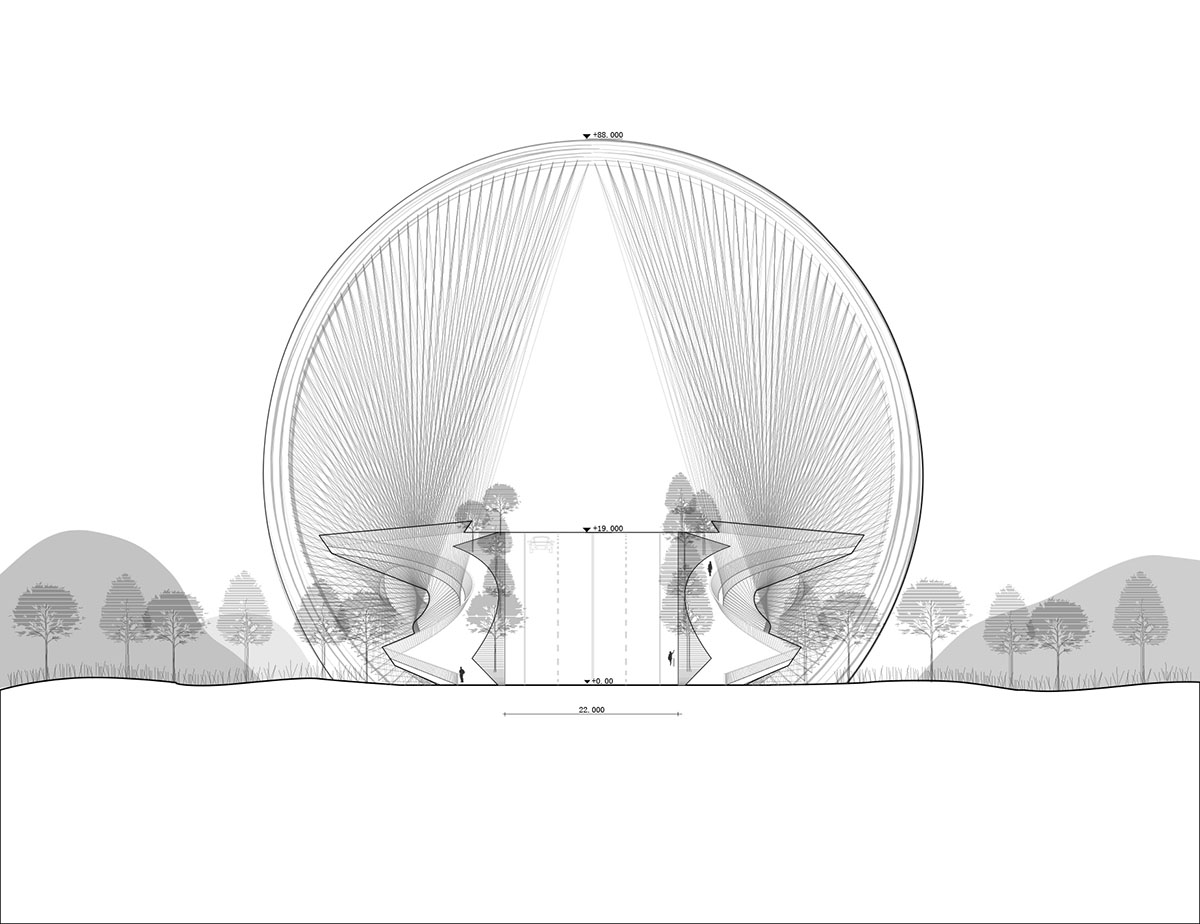 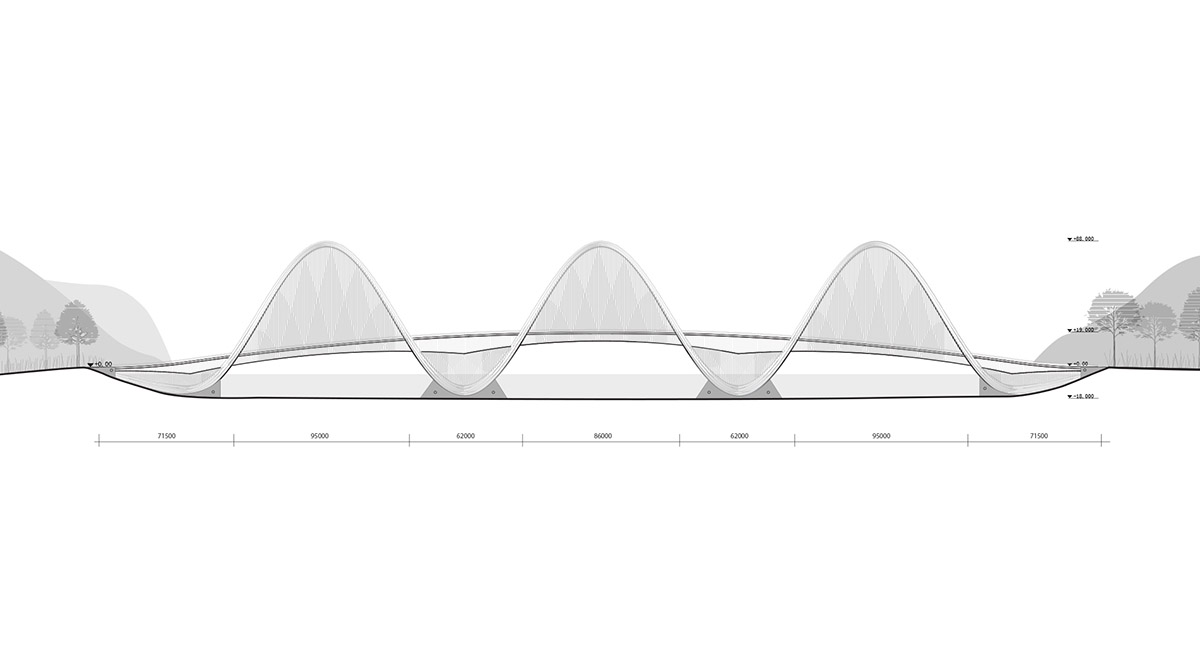 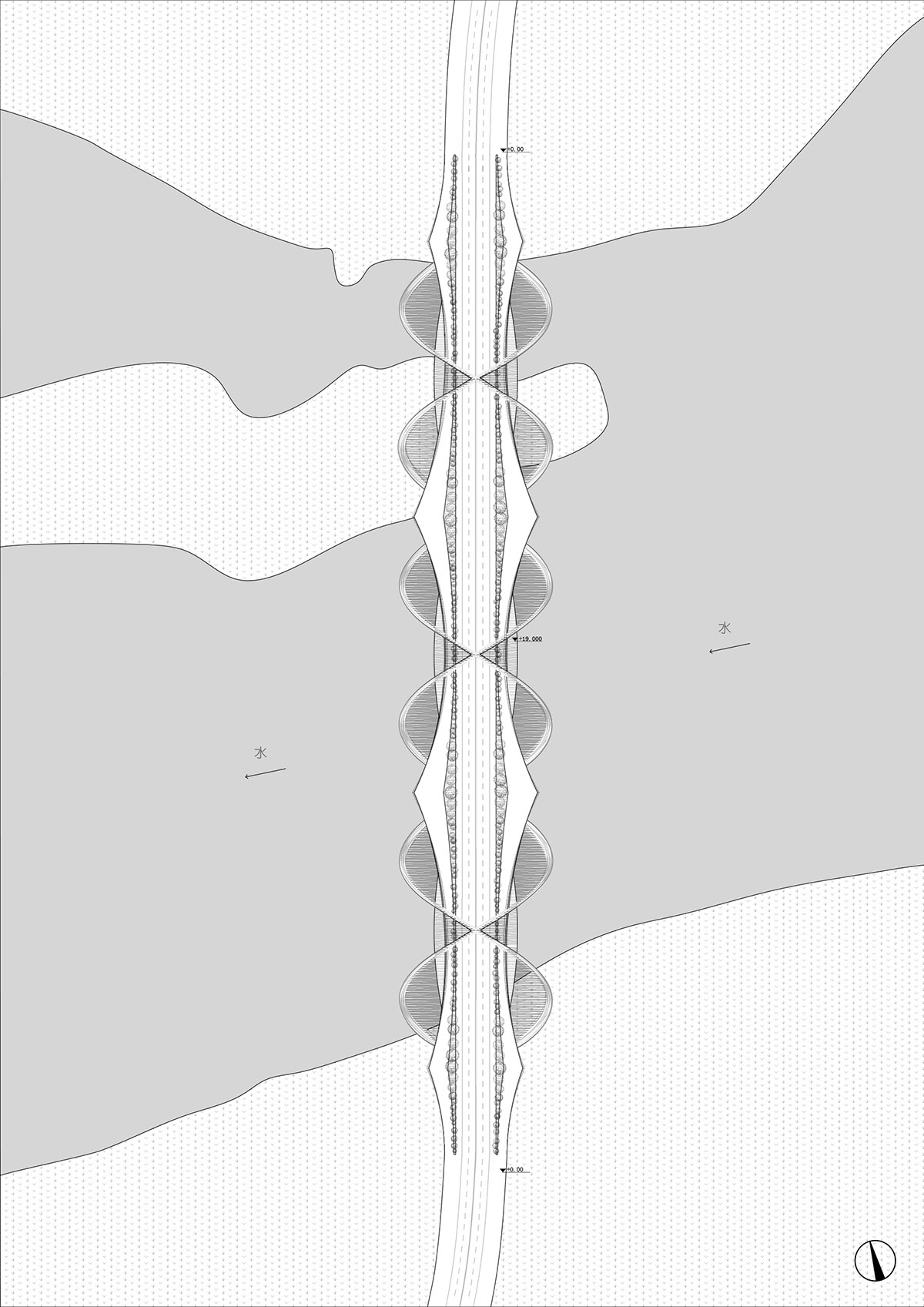