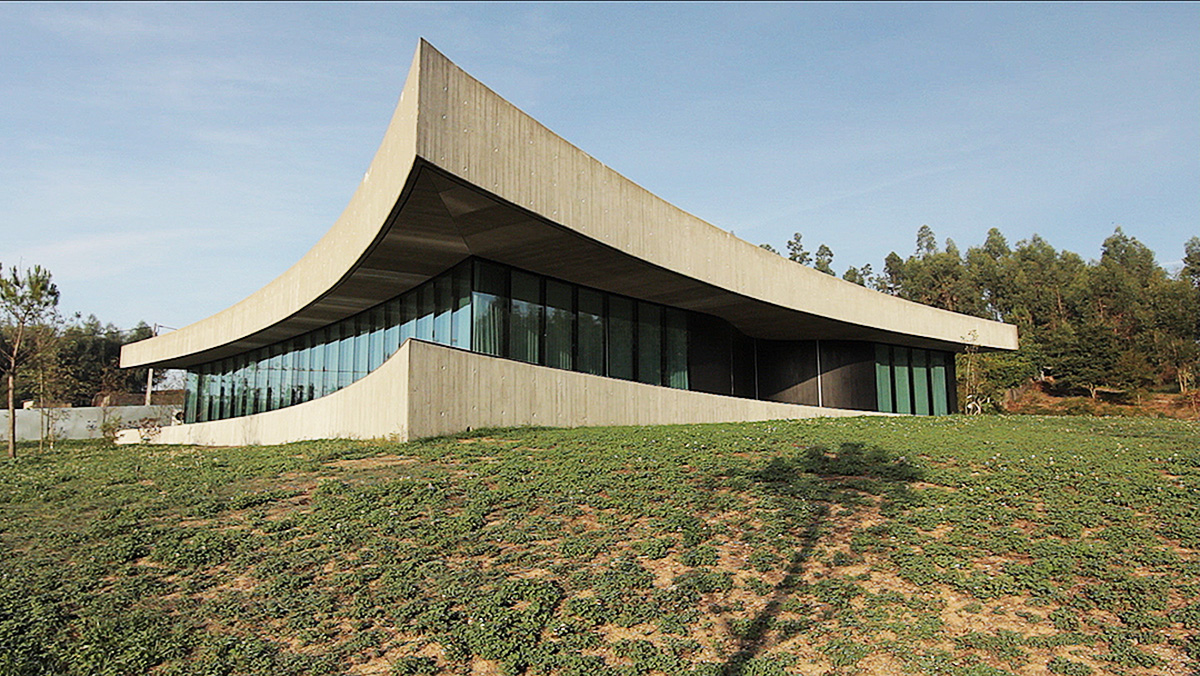 Building Pictures has made a video of the sharped-edged Cabo de Vila House by Spaceworkers- which shows fluidity of space, organic geometry and different spatial hierarchies in the building. Inspired by Stanley Kubrick’s film The Shining, the movie reinterprets the scape over a girl and her red tricycle.

Cabo de Vila House designed by Spaceworkers in Portugal for a young couple -the couple wanted a house that doesn't look like a regular house. The architects designed a shape that can fill the void left by the valley and embrace, reflect the surrounding green areas giving its users a special perspective on the landscape.

The proposed volume materializes its shape through two concrete slabs with its concave sides, allowing a light glass and wood wall to unroll between them, which in a positive and negative game let the interior of the house communicate with the exterior. 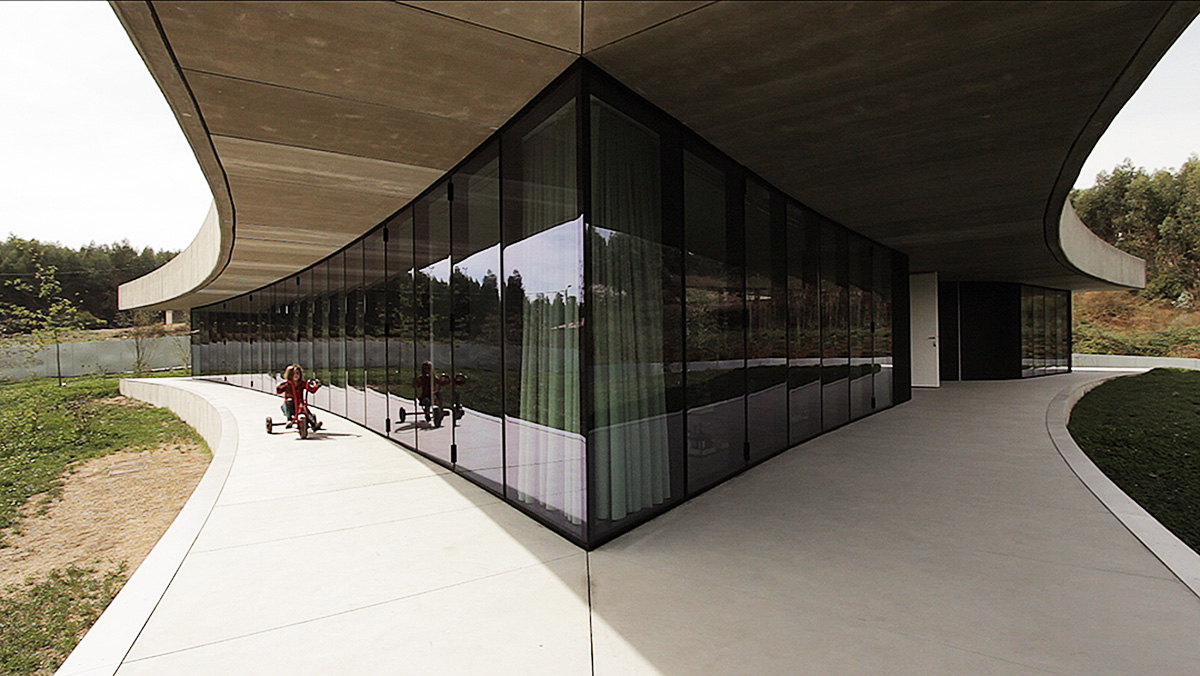 In a 3-min video, Building Pictures tells the story of a girl and her red tricycle-and a 'beautiful house' inspired by 'The Shining' from Stanley Kubrick. In this movie of Cabo de Vila House from the architects Spaceworkers, instead of using the tricycle and the space to instal a sense of madness.

The idea is based on a house that has no barriers between the different spaces, only an organic geometry that establishes hierarchies between them and that allows mutual visual contact. No better way to do this than to follow a young girl as she travels through the house. 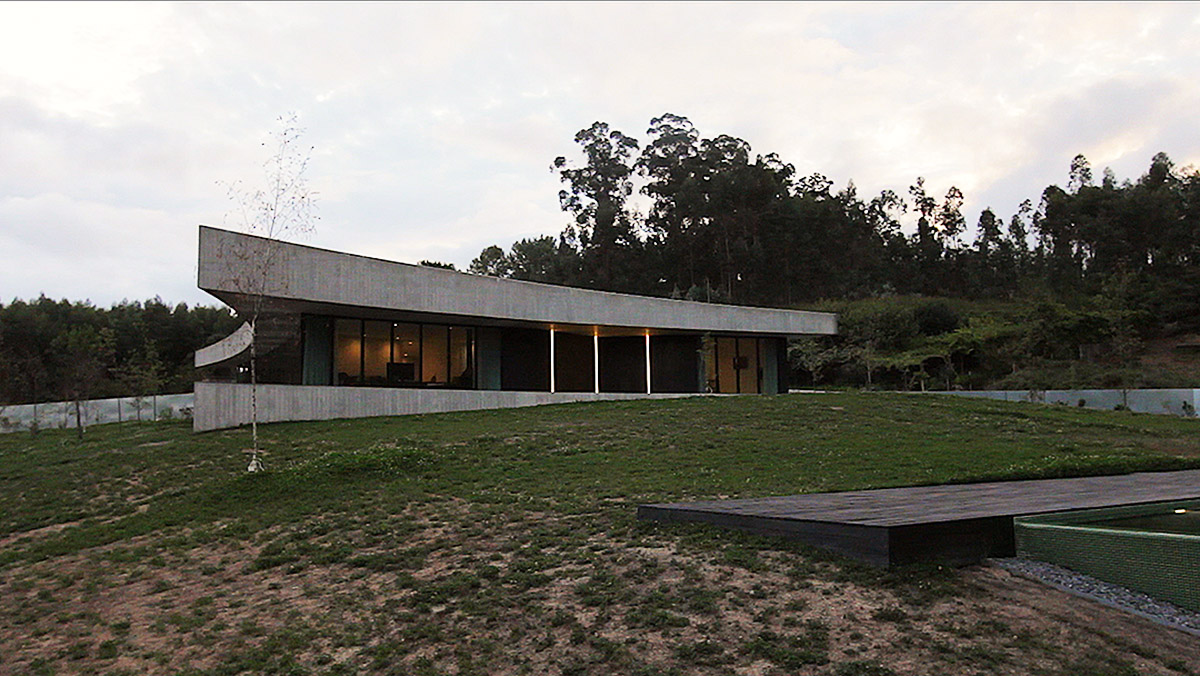 In the Building Pictures movie, the route starts in the garage and she goes on to a long study desk and electric guitar round to the living area and television room, which features a hanging wood-burning stove.

Here she stops and enters the living room to observe the views from Paredes. She gets back on her bike and cycles her way into the kitchen and dining room, as well as through the white curtain wall that separates the more private areas. 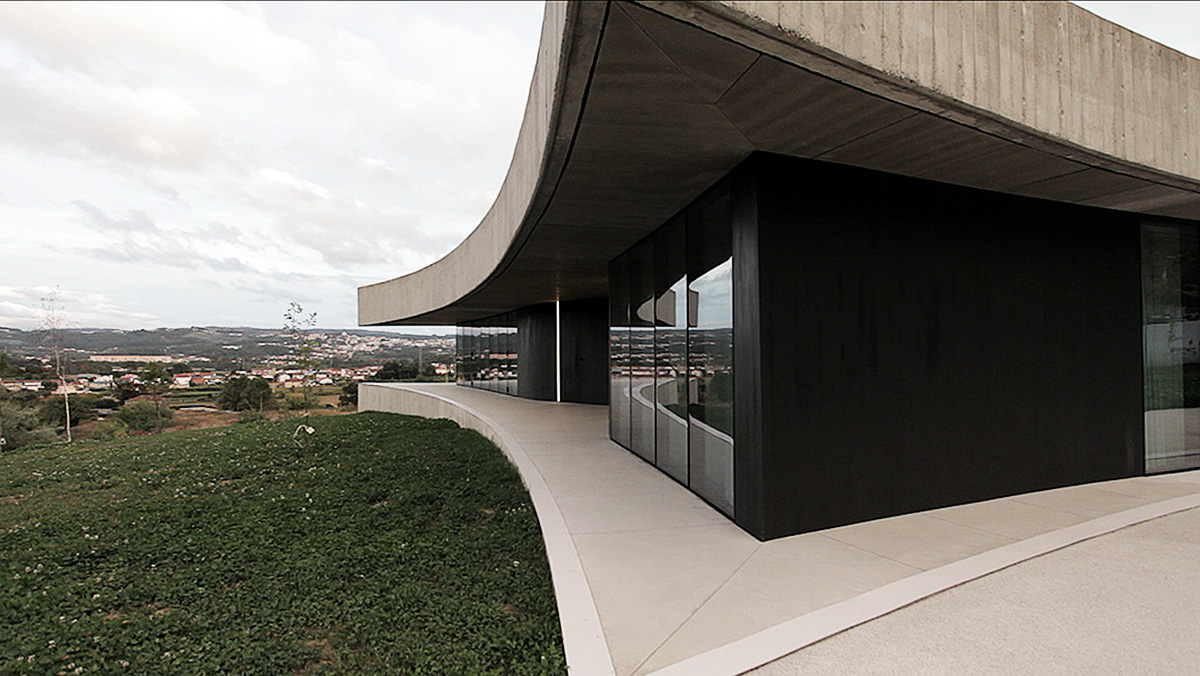 She goes outside and pedals along the glass facade. The reflections bring up a connection between the house and the rural environment around it.

We follow the girl through the courtyard of a house that begins where it ends and that blends with the changing landscape. The video continues with a series of images of the house, conveying the idea that it blends with its rural surroundings. The movie ends in a surprising way with a touch of silliness. 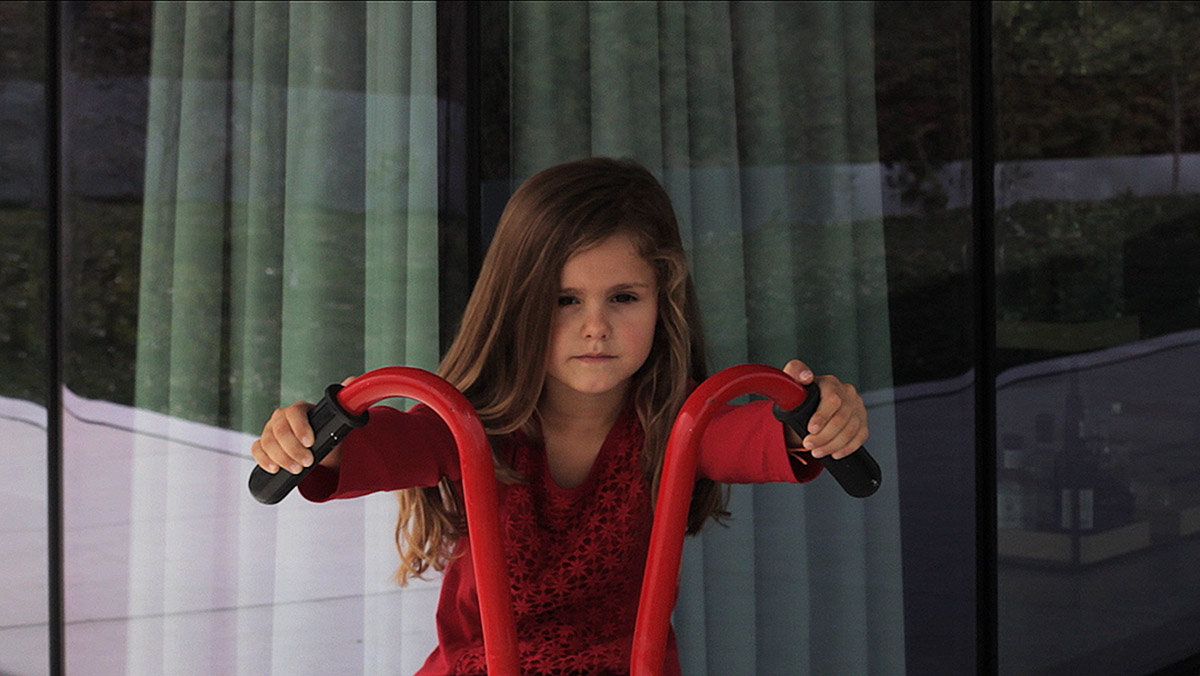 Cabo de Vila House tries to vanish all the walls and barriers between spaces, the same way this movie tries to break the usual way of representing architecture. 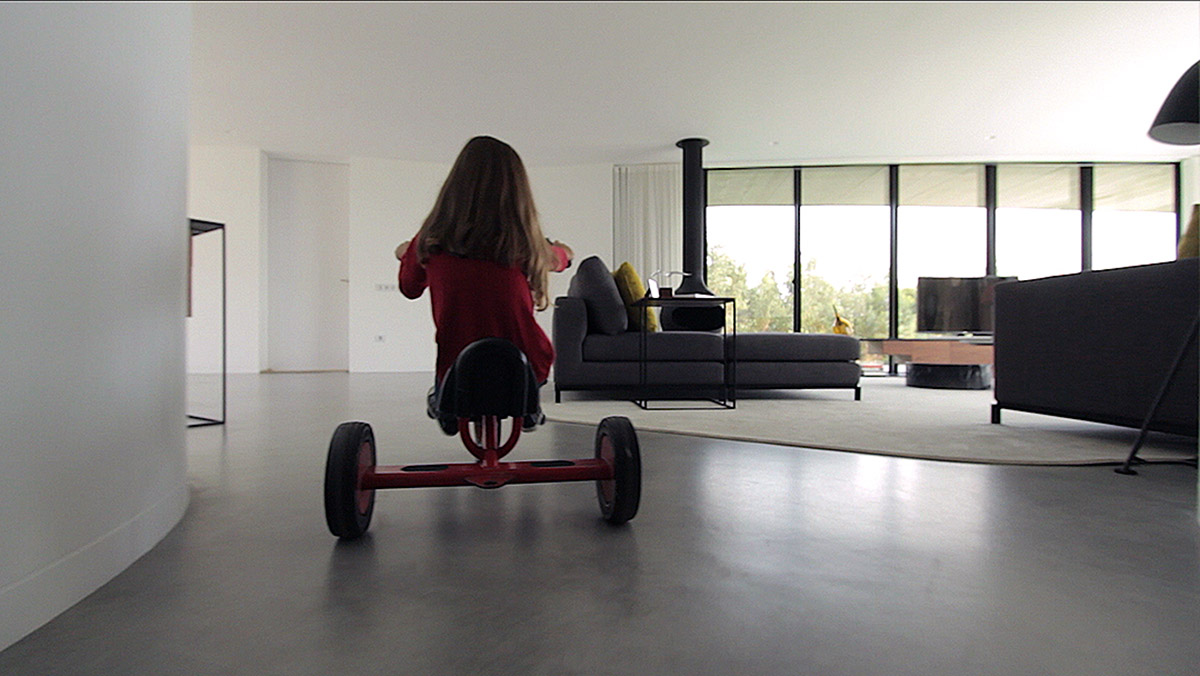 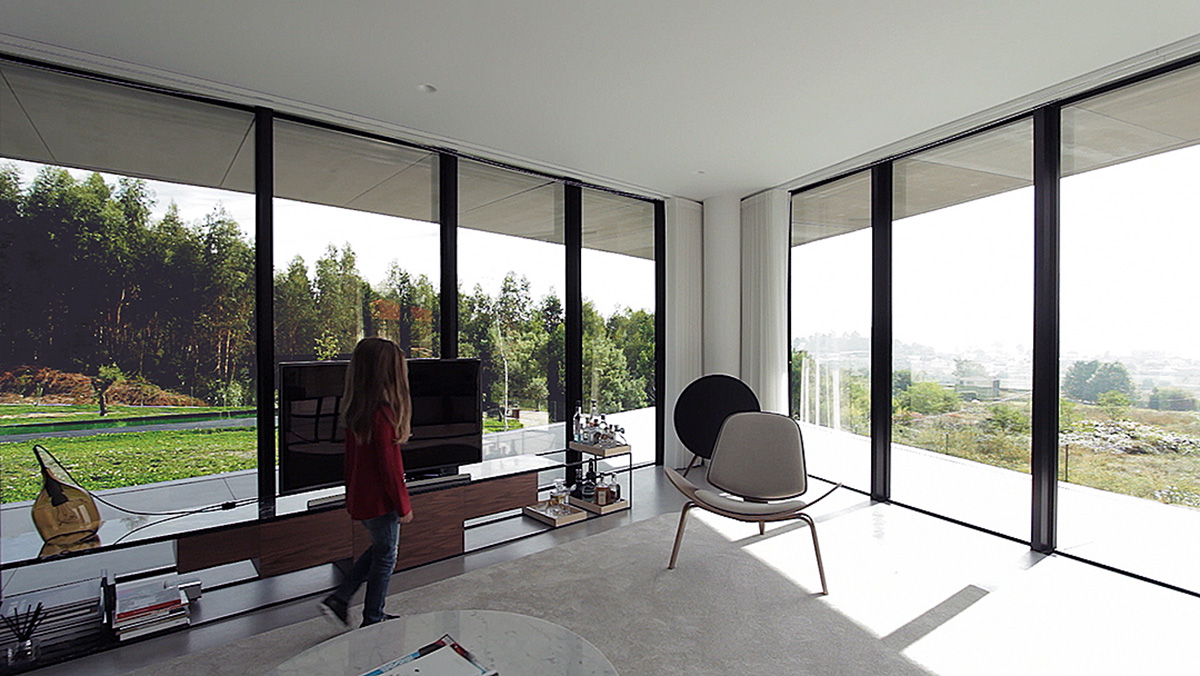 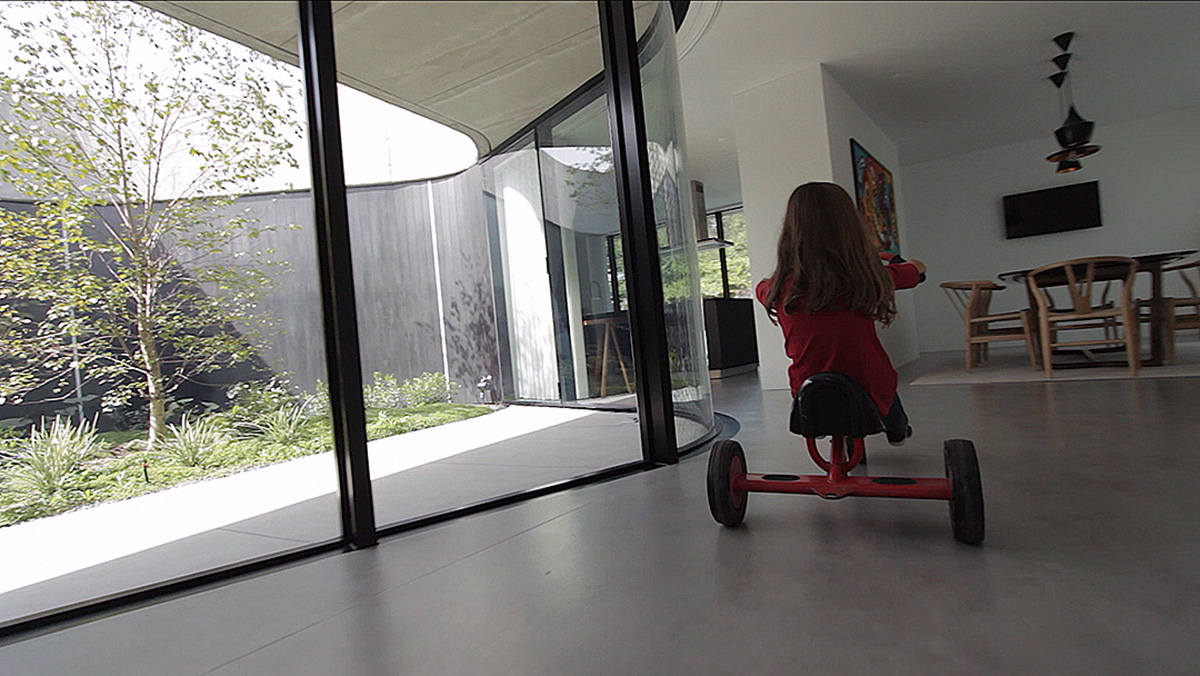 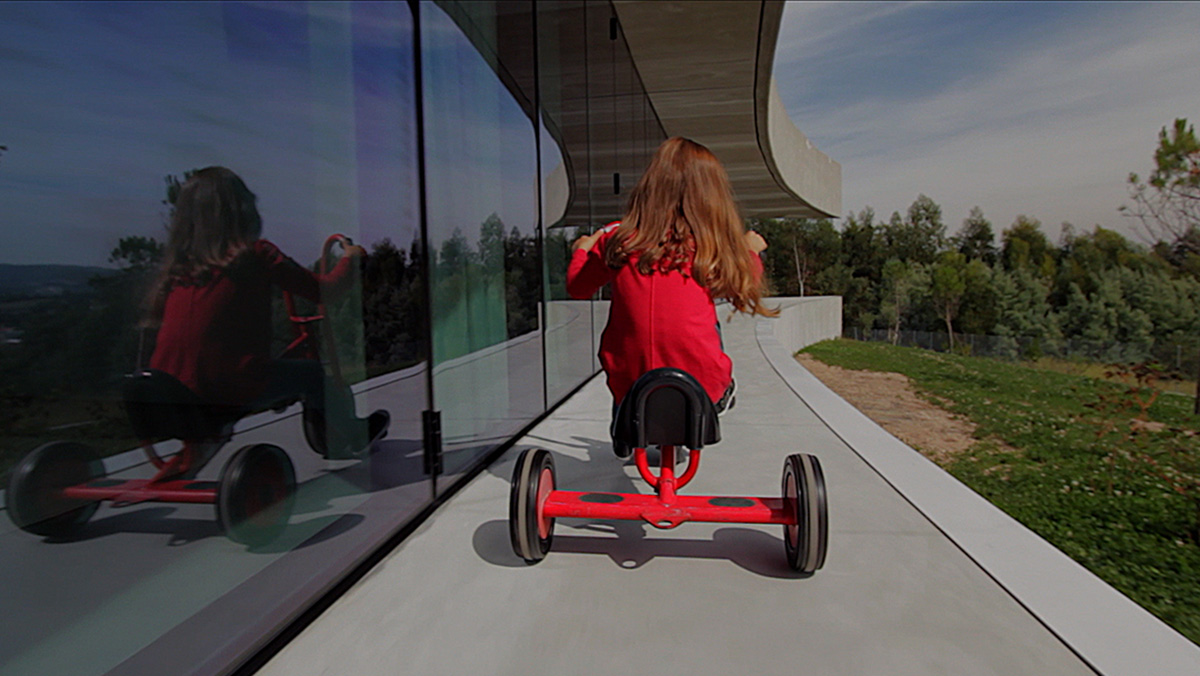 Building Pictures is a multimedia platform that tells the story of spaces in a different way- by reviving and reinterpreting the spatial geometries. The video platform creates a series of architectural episodes of unexplored buildings in many countries of the world. You can view selected videos of Building Pictures here.

All images courtesy of Building Pictures