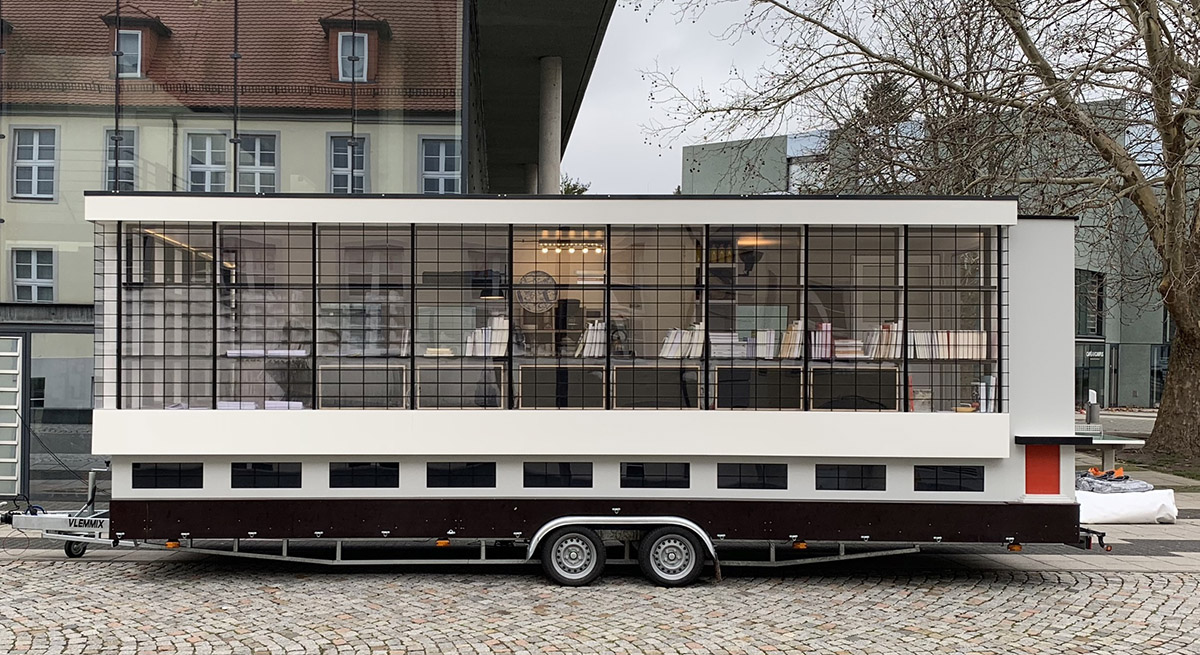 A bus version of Bauhaus School in Dessau has begun its world tour to explore new forms of "learning and unlearning" called as "Un-school." On the occassion of the 100th anniversary of the Bauhaus, the project - developed by Savvy Contemporary - will travel to four cities in 2019 regarding the school's centenary year.

Savvy Contemporary project seeks to challenge and act against the inherent, neocolonial power structures in design practices, theory and teaching. 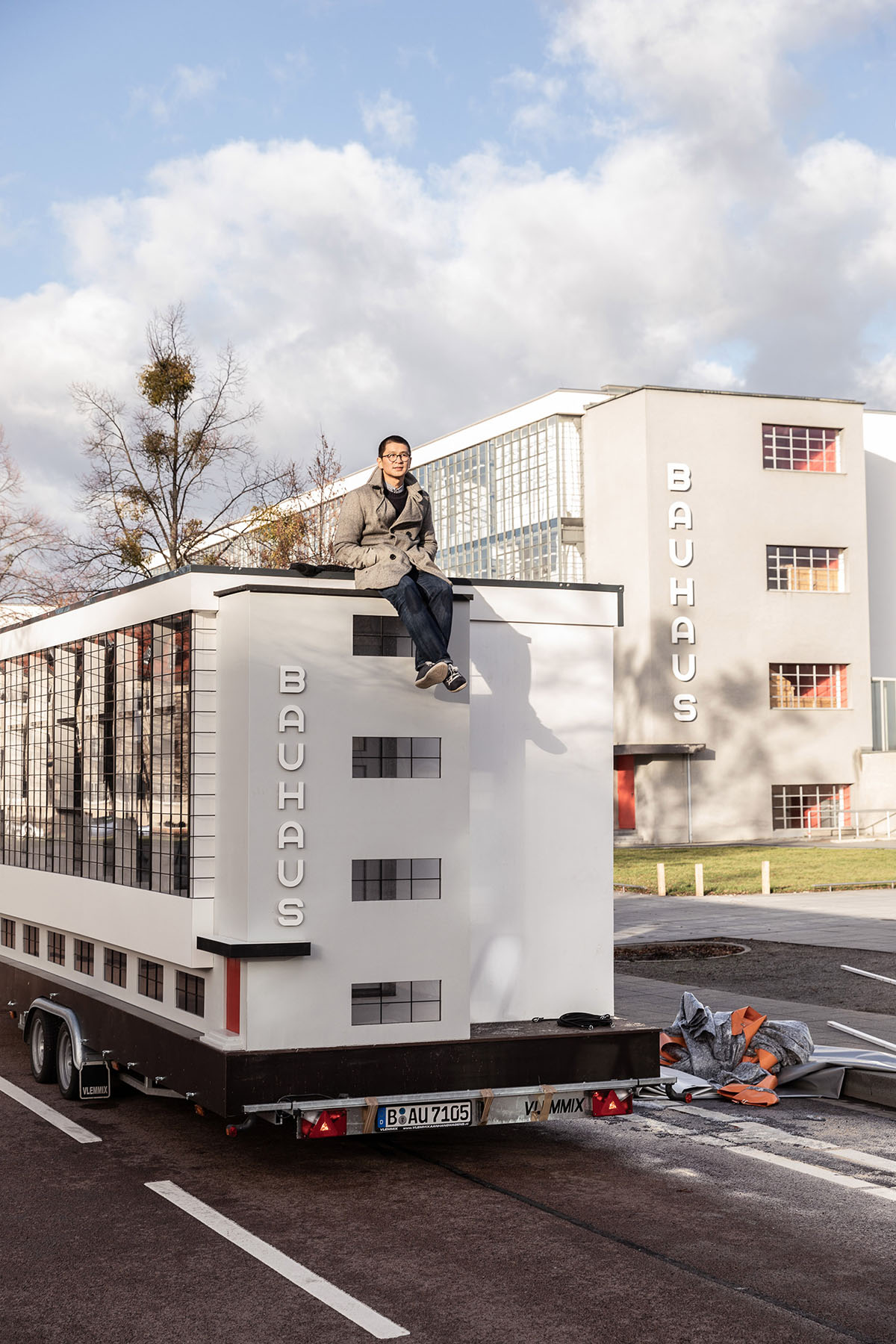 "It takes up the founding moment of the Bauhaus one hundred years ago and starts from its reality as a school of design to reverse and reshape it," said Savvy Contemporary in a project description.

"We recognize the Bauhaus not only as a solution, but also as a problem, and will propose a school of design that may well become an “un-school,” and will emerge through a process between Dessau, Kinshasa, Berlin and Hong Kong."

Named Wohnmaschine (means "living house"), the miniature bus has been developed as part of the Spinning Triangles project. The 15-square metre building has been designed by Berlin-based architect Van Bo Le-Mentzel. The mini bus school will not be developed by the geopolitical west, but through the accelerated movement between deeply interwoven places – Dessau, Kinshasa, Berlin and Hong Kong– and will confuse their prescribed roles as idea provider, raw material supplier and champion of production. 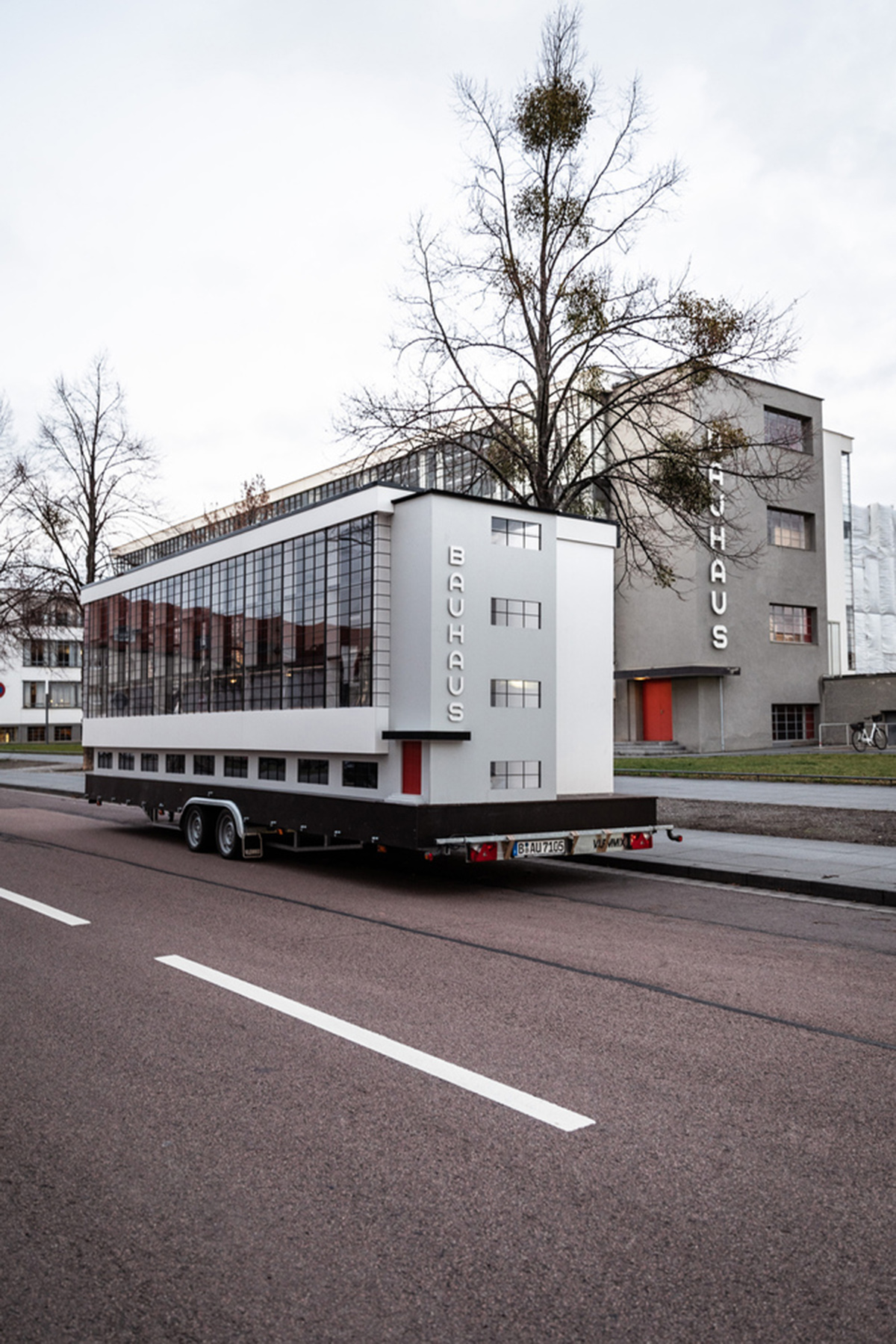 "First and foremost, the Bauhaus was a school of design. It aimed to educate a new generation of designers, makers and thinkers that would face the challenges of their “now”."

"Spinning Triangles takes up this founding moment of 1919. Not in order to repeat it but to twist it: we will create a school of design that has what it takes to tackle the challenges of our “now”, and might, precisely by this, turn into an “Un-school”."

The bus began its travel from Dessau and will continue to Berlin, where the Bauhaus archive is located, then it will travel to Kinshasa, in the Democratic Republic of the Congo, and Hong Kong. 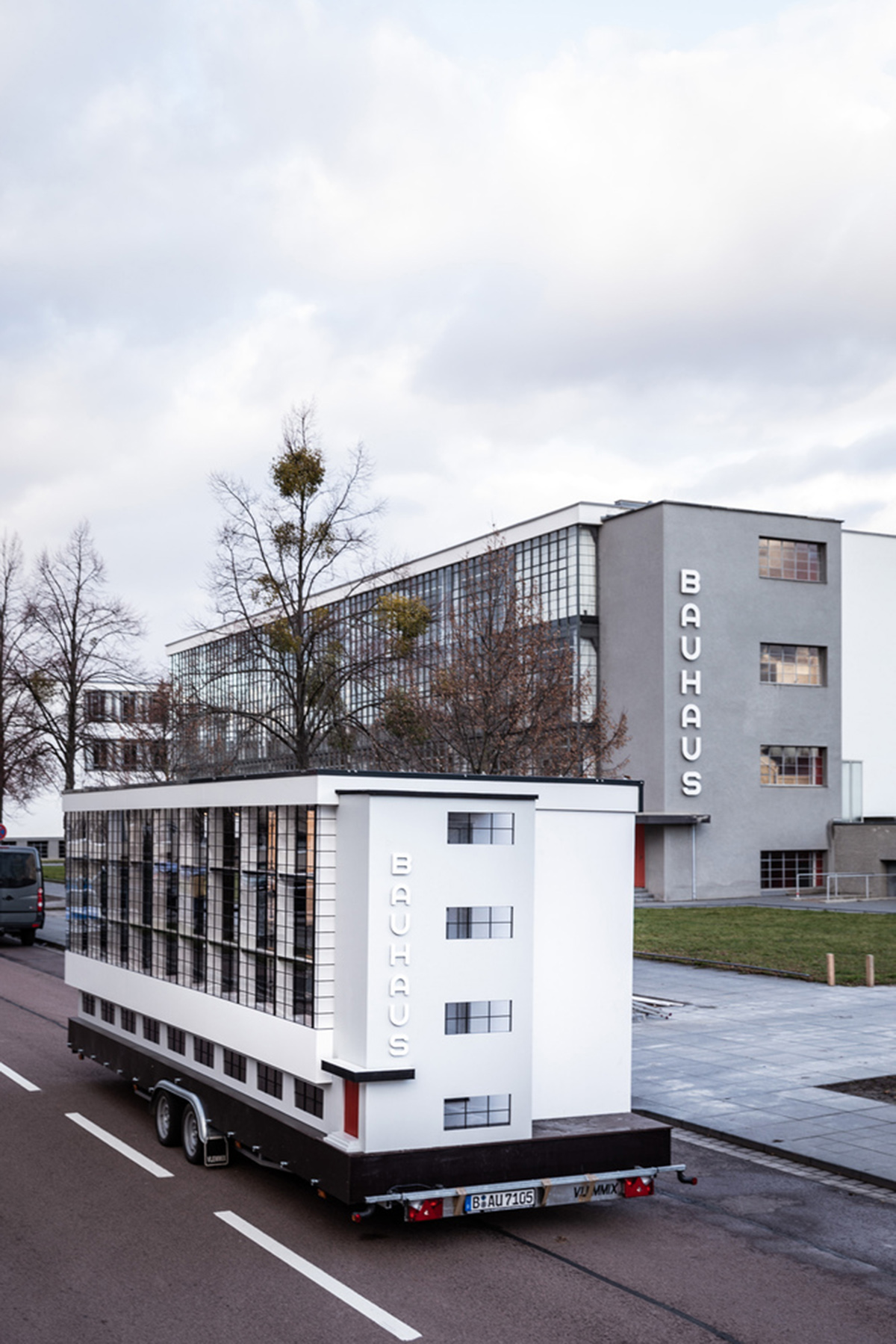 This "Tinyhouse" will act as a miniature clone of the workshop wing of the Dessau Bauhaus building in which Savvy Contemporary will host a series of workshops and symposiums over the 10-month period.

Behind the iconic facade, the bus hides a 15-square-metre apartment with an elaborate interior design and exhibition possibilities. Savvy Contemporary will not only inhabit these four walls, but also invite guests in order to negotiate space and property and question the complex heritage of modernity. "We will face the relations of coloniality and design as well as its various visibilities and invisibilities. Shortly after, results and experiences will move to Berlin on the occasion of the “100 years of bauhaus” opening festival, before the project is developed further in the Democratic Republic of Congo."

"Design has power. It creates our environments, our interactions, our being in the world. For too long, practices and narratives from the global South have been kept at the periphery of the design discourse, been ignored altogether, or appropriated," added Savvy Contemporary. 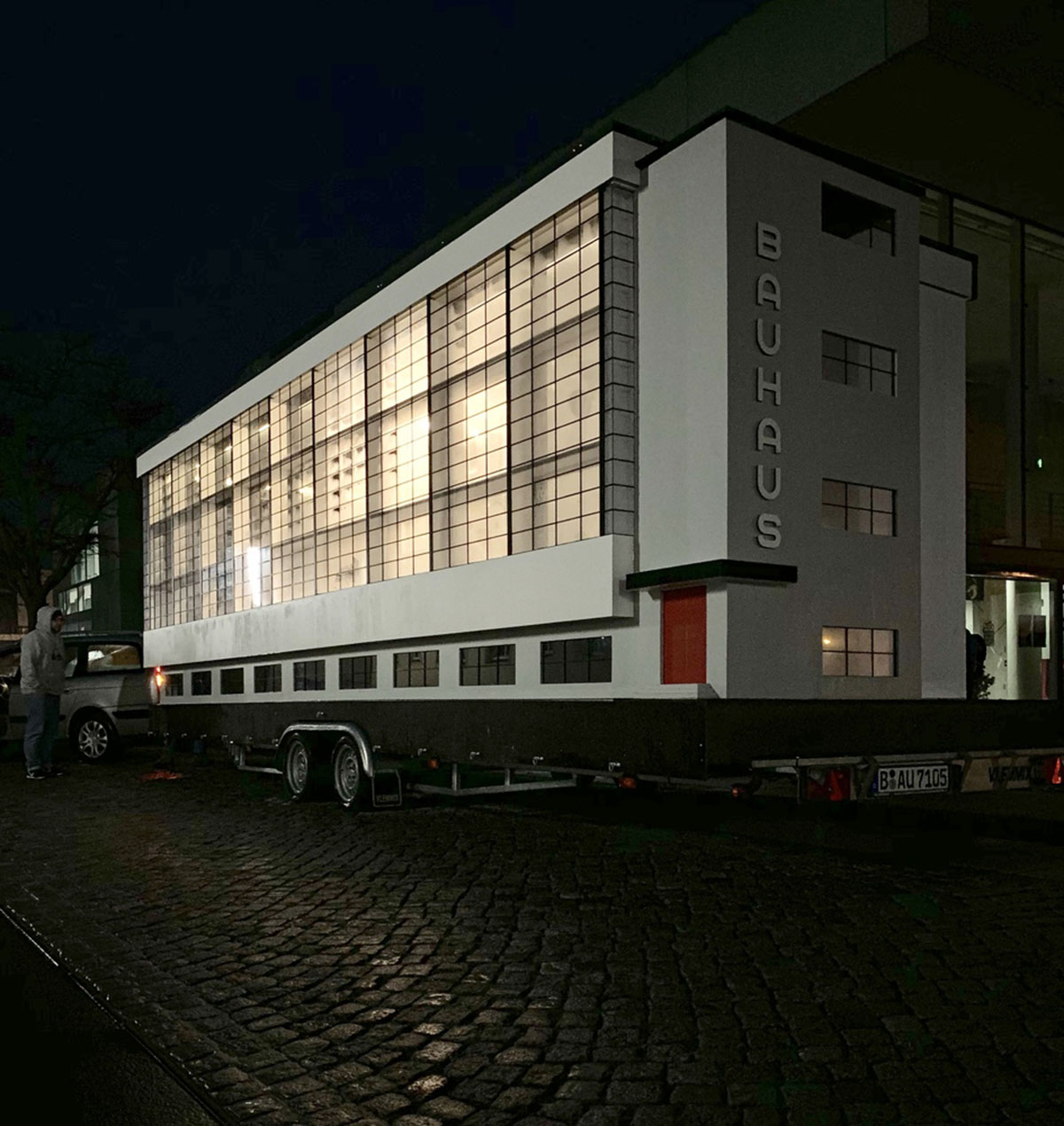 This needs to change. And it can only do so if we start with new forms of learning and unlearning, that may perhaps actually be very old, but have certainly been overheard for far to long.

Spinning Triangles project is developed in collaboration with Tinyhouse University, Hochschule Anhalt, Goethe-Institut Kinshasa and Para Site Hong Kong. The project is directed and curated by Elsa Westreicher and Bonaventure Soh Bejeng Ndikung, and is funded by the Bauhaus heute Fund of the German Federal Cultural Foundation.

Rustic Canyon designed by Walker Workshop features light-filled and creamy interiors in Los Angeles
May 13, 2022 • 1280
World Architecture Festival and World Festival Of Interiors open for entries for Its 2022 edition
May 09, 2022 • 1088
Kengo Kuma and Associates designs commercial building covered by plants in downtown San Jose
May 09, 2022 • 1058
Morphosis' University of Texas, a new arts campus breaks ground at Dallas
May 12, 2022 • 1035
Atelier ITCH designs white brick house for live and work on a triangular site in South Korea
May 18, 2022 • 827
Field Conforming Studio installs steel sculpture with nine hollow columns in Tangshan
May 11, 2022 • 813