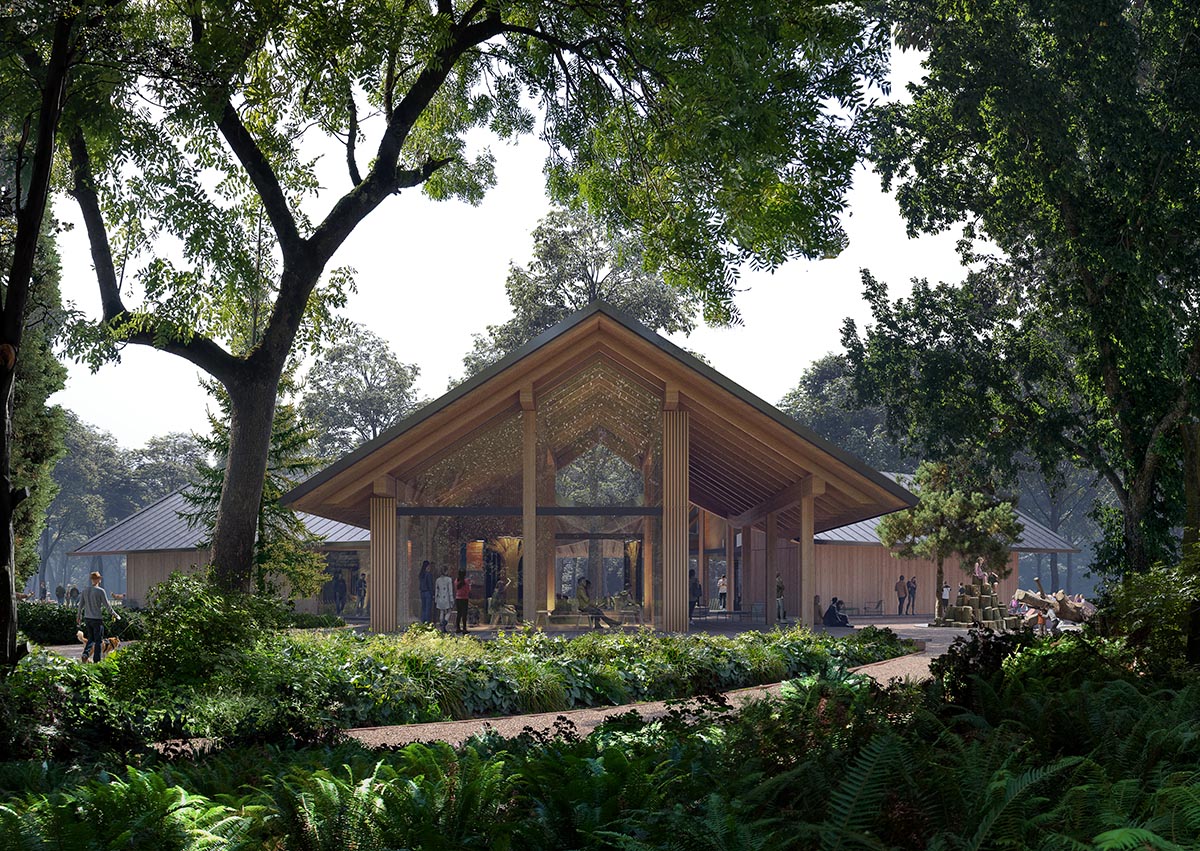 Powerhouse Company and DELVA Landscape Architecture | Urbanism have revealed design for a new visitor center to a new Dutch national park – right in the heart of The Hague, the Netherlands.

The 600-square-metre visitors center, aiming to become "a unique gateway", combines architecture and nature in a seamless way for the Koekamp, a green expanse that reaches into the heart of The Hague and is home to deer and storks.

Incorporating a visitor centre and a large-scale park, the project was commissioned by the Dutch forestry commission (Staatsbosbeheer), is expected to be completed in 2024. 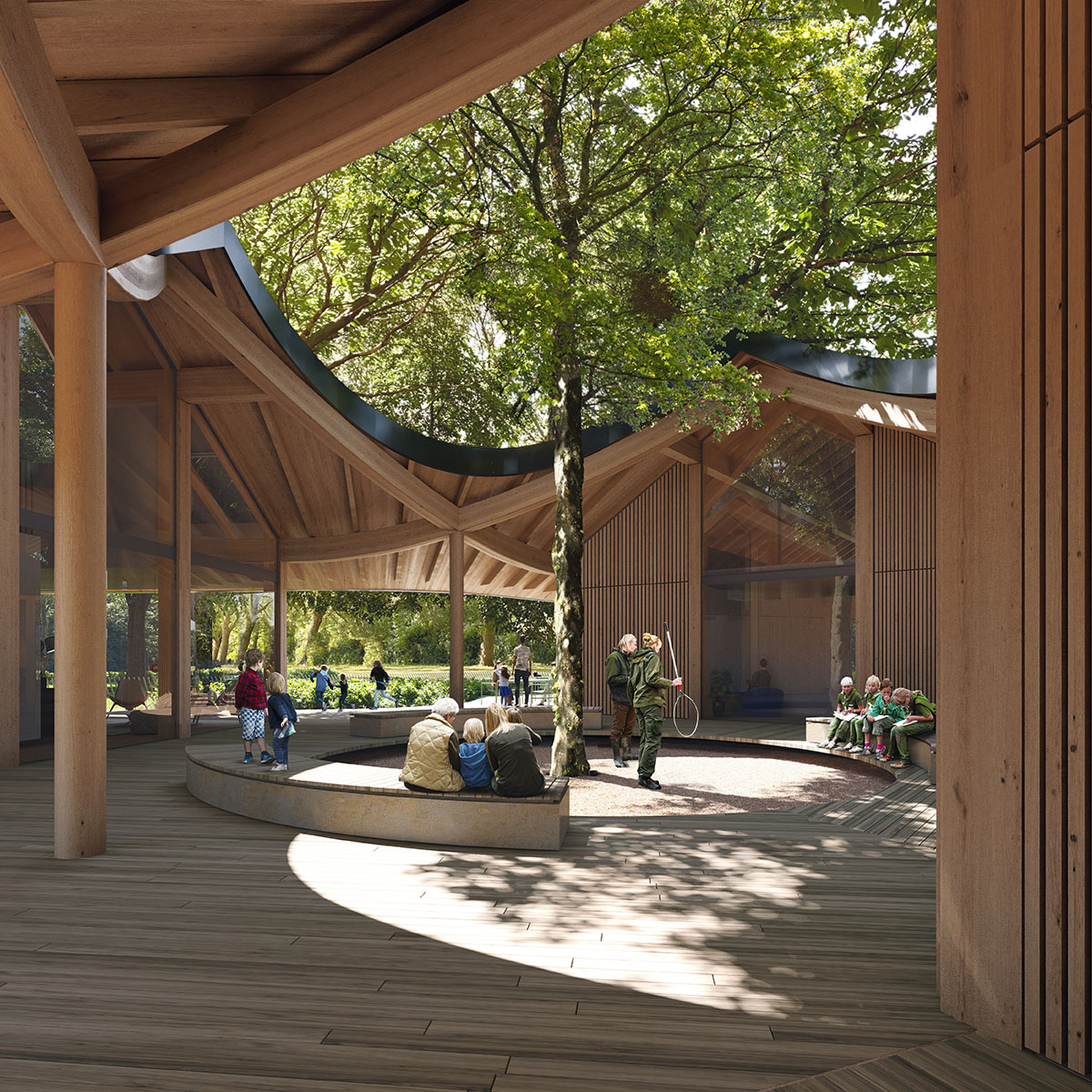 Just a stone’s throw from The Hague’s Central Station, Koekamp is a large piece of land from medieval times: a cattle field turned deer park when Philip the Good brought the first deer here.

The area has became a public landscape, popular for walks, from the early 17th century. Later, it was partly landscaped in the English landscape style by 19th-century landscape architect Jan David Zocher. Recently, it is largely fenced off - which is closed to the public, it has become more of a place to admire from a distance than to visit.

Today, Koekamp is connected to the heart of the city and its train station to a network of green areas in The Hague and beyond, including the Malieveld, the Haagse Bos and the many miles of sand dunes along the coast. These diverse areas are now combined under the umbrella of a new national park, the Hollandse Duinen park. 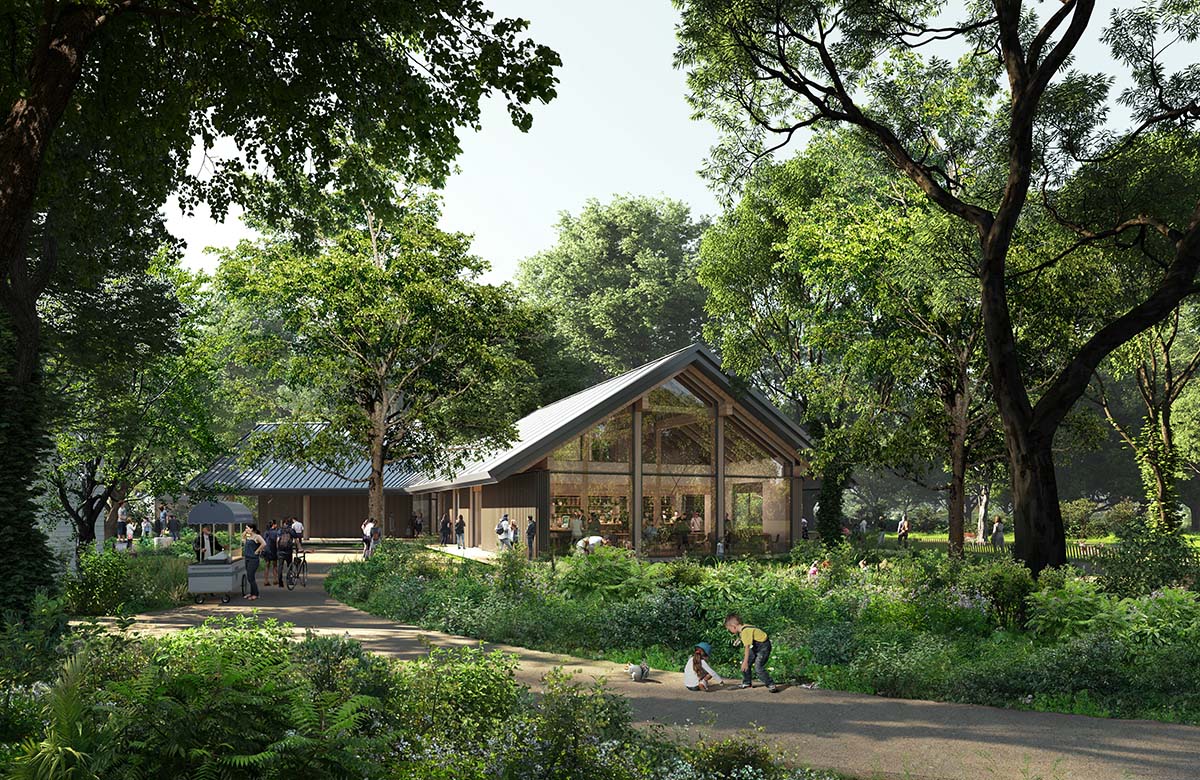 The new visitor center will be the park’s gateway, inviting people to explore part of the Koekamp, or venture further afield.

Koekamp is one of the four green spots of the Green Entrance: a new piece of greenery around Central Station is designed by DELVA, including KJ Plein (Koningin Julianaplein).

"We set out to create an entrance that is not just a building, but a landscape. The balance between architecture, programme and design of the park is essential here. Our inspiration was the past," Steven Delva, DELVA Landscape Architecture | Urbanism.

"Instead of repeating history, we lovingly adapted it and laid it back with respect for nature and within the design spirit of landscape architect Zocher," Delva added.

There is a certain contrast between the green landscapes in the heart of the city and the urban fabric, where the new visitor center will retain and enhance this contrast.

Paying attention to the existing trees as part of the landscape, the team preserves these monumental trees on the site that guides the design and keeps them as an integral part of the visitor's experience. 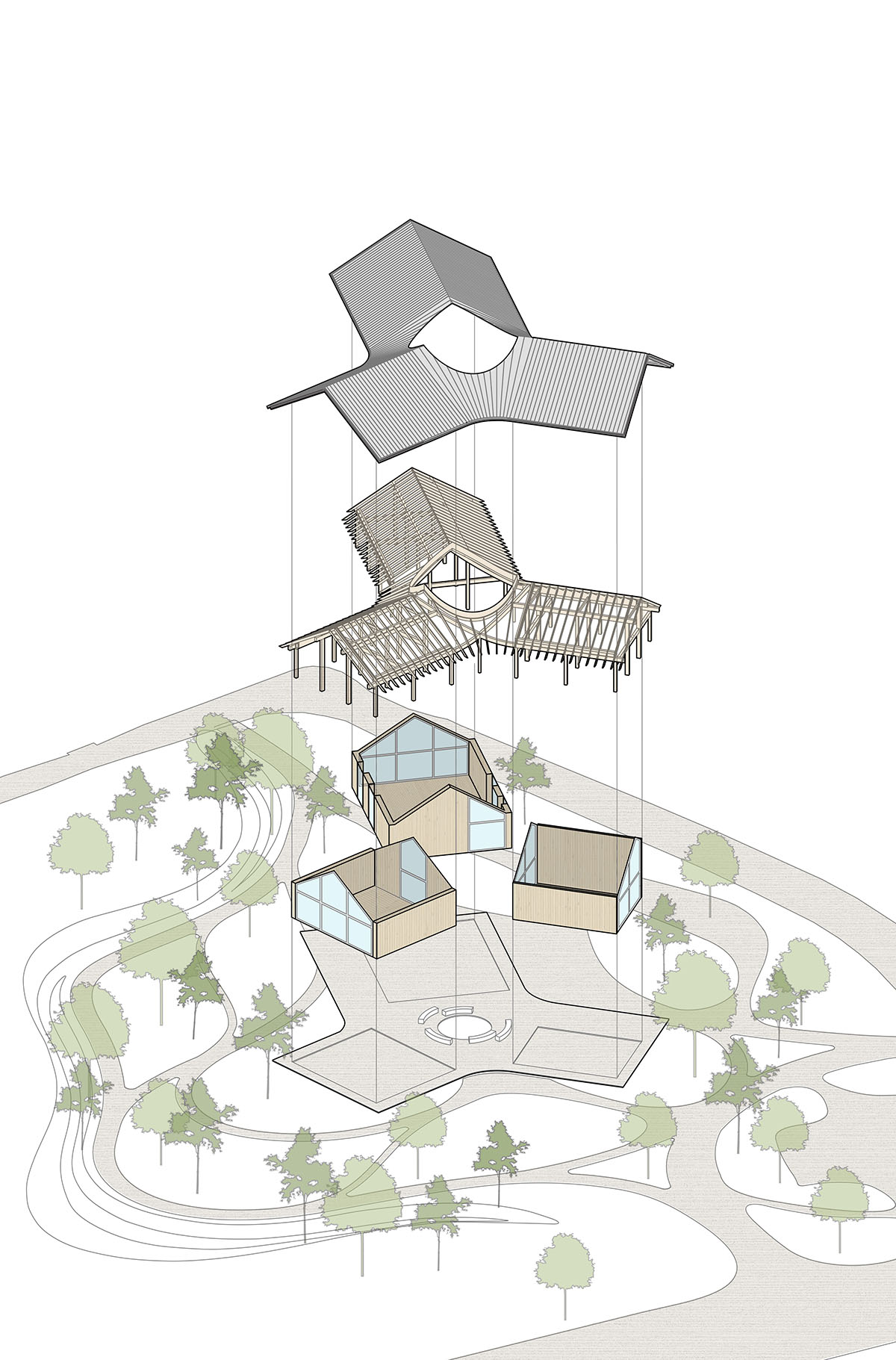 The presence of trees also determined the site and size of the new visitor center. Landscape and architecture are intertwined in the redesign of the Koekamp.

Three houses are positioned carefully in between the tree trunks under a unifying triple-winged roof that smoothly weaves between the green canopy and converges around a central, circular court that will accommodate another beautiful oak.

The result is a design that is perfectly integrated in nature and is partly concealed by it. 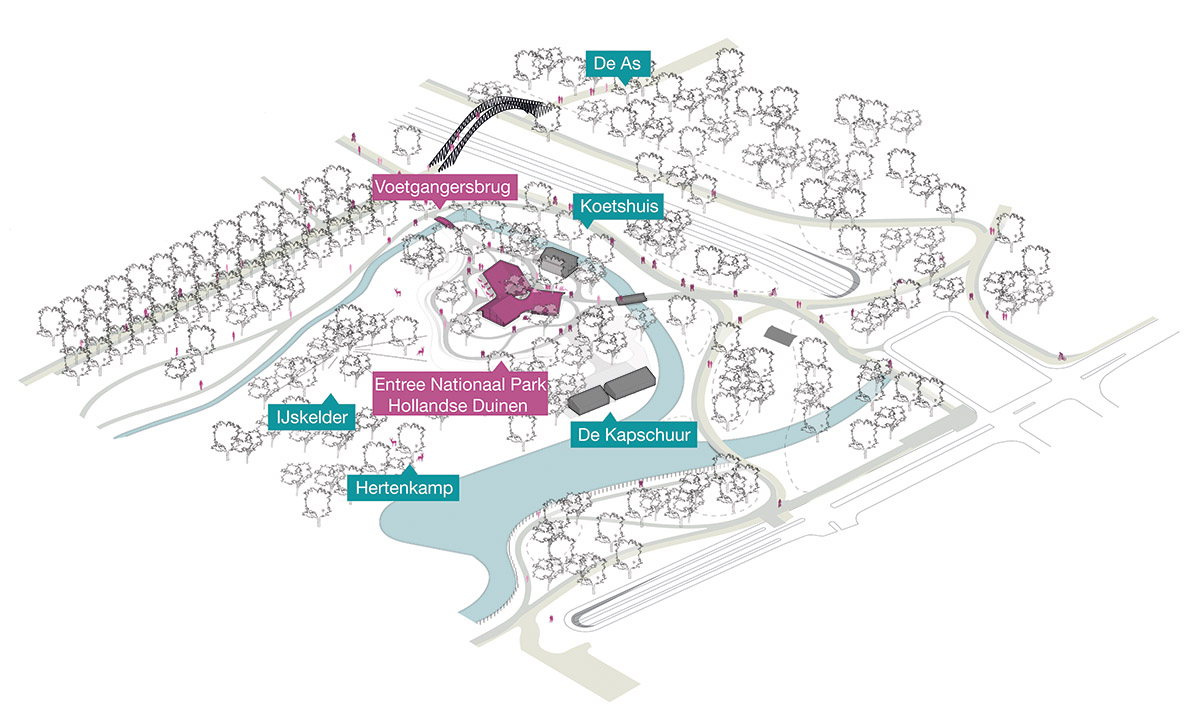 "We divided the functions under a triple-winged roof, offering an outdoor experience. Visitors and foresters alike can move between them on an equal level," said Albert Takashi Richters, Associate Architect Powerhouse Company.

The first two public wings house an information center to the south, where visitors can learn about the landscape and its long history, and a restaurant to the north.

The central circular court forms an informal outdoor meeting space, with room for activities such as a play area. The third wing accommodates the offices of the forestry commission, which also offers workshop space in an old coach house nearby. Visitors will now be able to see and understand some of the foresters’ work. 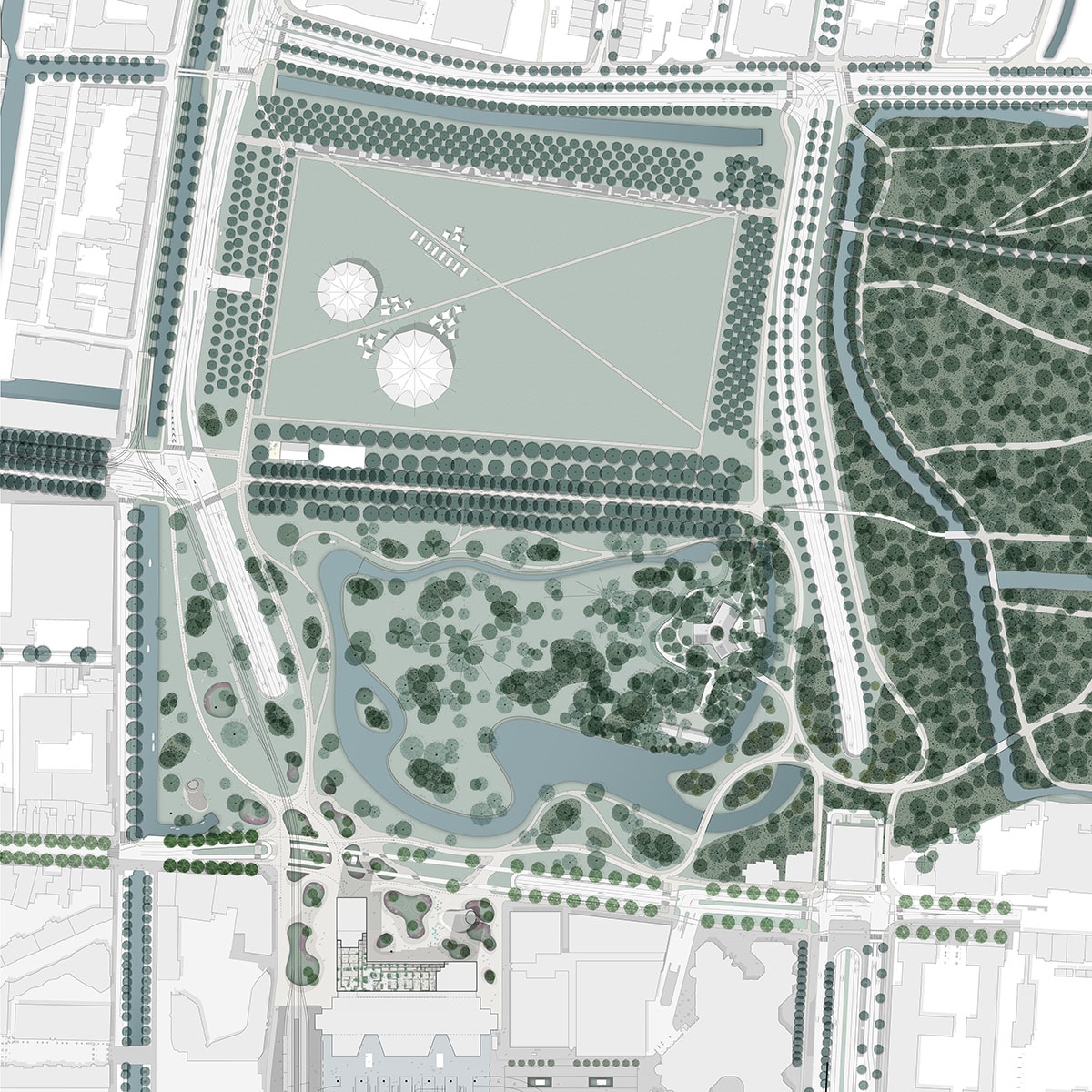 The buildings are constructed entirely in timber and glass. The gable end walls are designed completely glazed and transparent, offering views through to the trees on the other side, while the side walls are made of timber with grooved detailing.

This buildings' façades are built from 50 percent wood and 50 per cent glass – that offers the greatest energy efficiency. The trio of structures rests on a floating wooden platform, surrounded by a looping pattern of paths evoking the organic pathways characteristic of Zocher’s work. 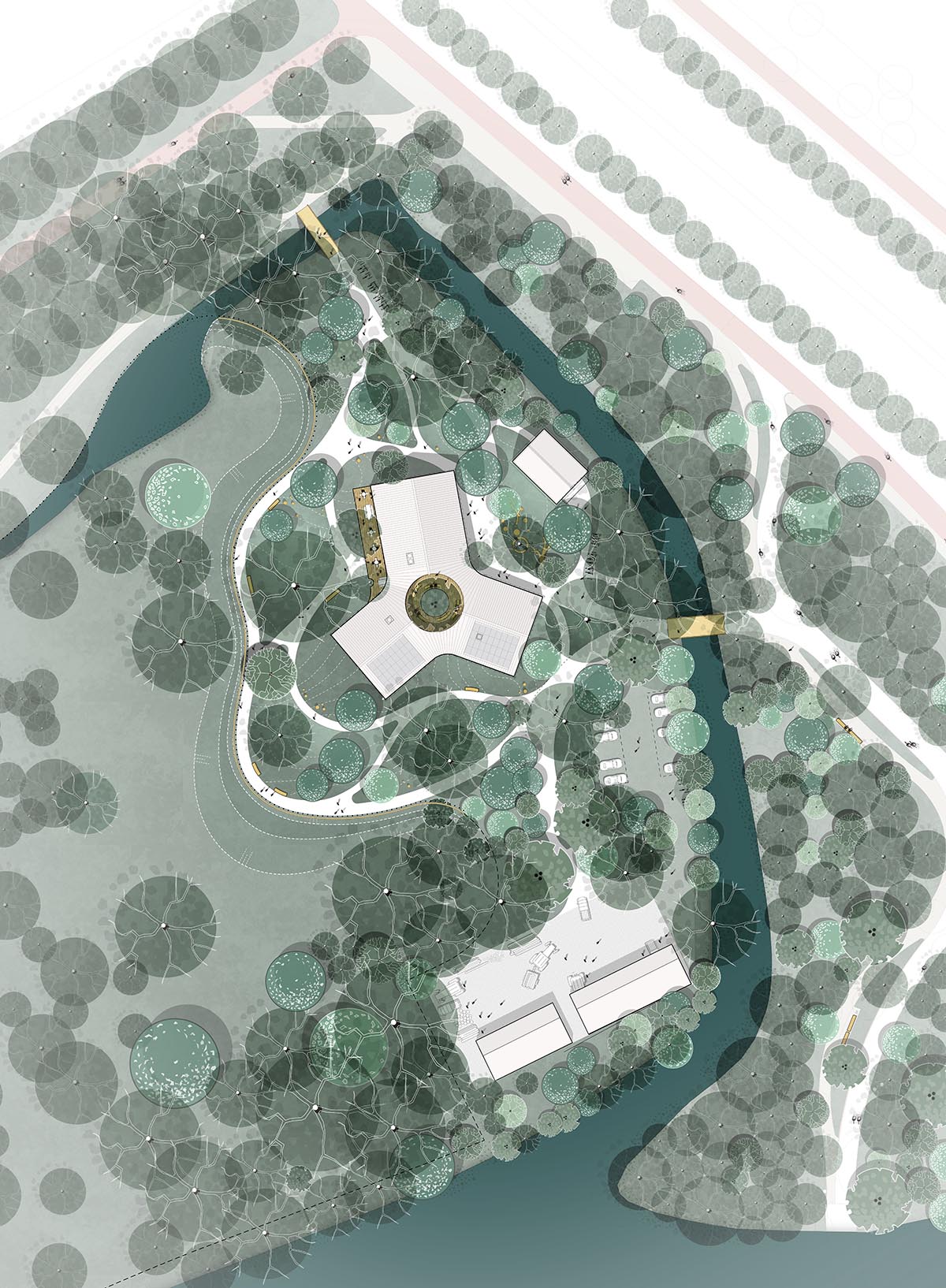 The new Koekamp pavilion offers a marked contrast with the urban architecture of the Hague by being modern and smooth yet warm and welcoming.

"The building is a guest in the landscape, partly hidden between trees. With its human scale and rustic style, it offers a marked contrast with the urban architecture of The Hague outside the Koekamp," said Emma Scholten, Powerhouse Company. 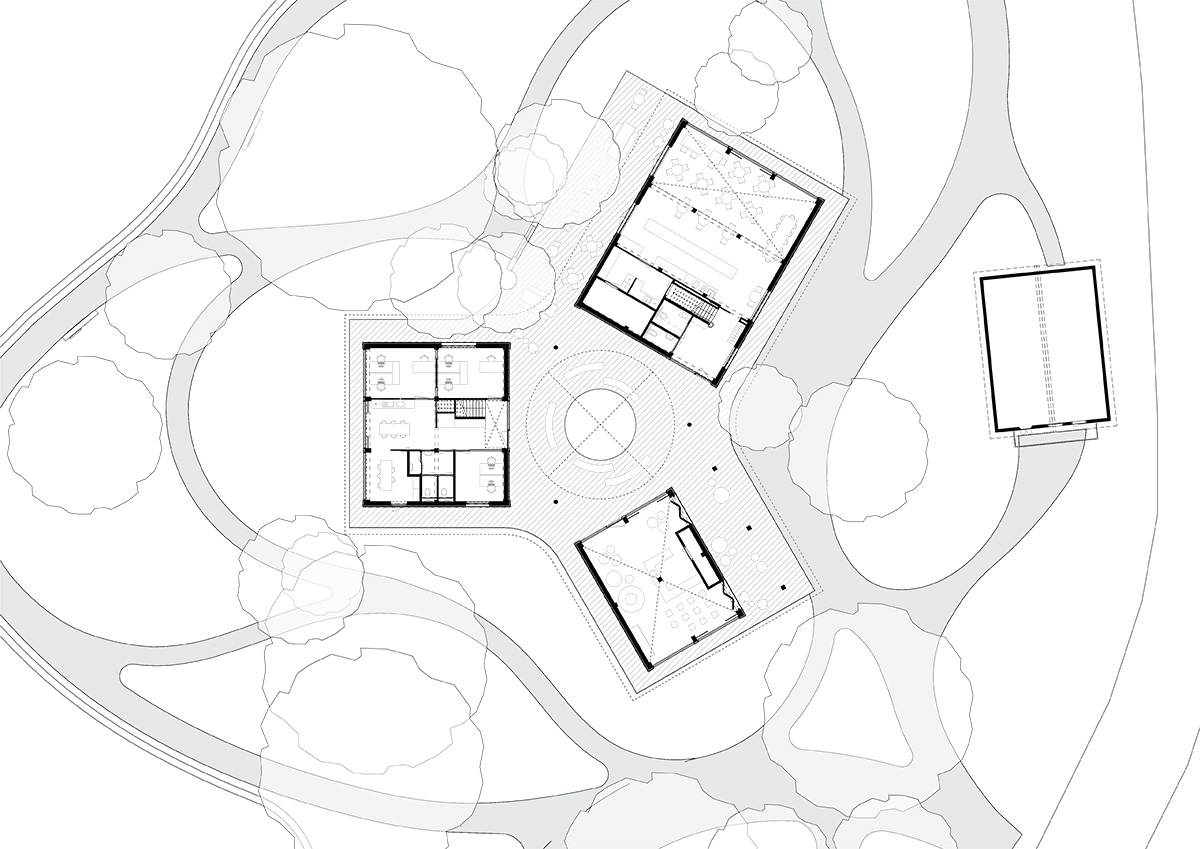 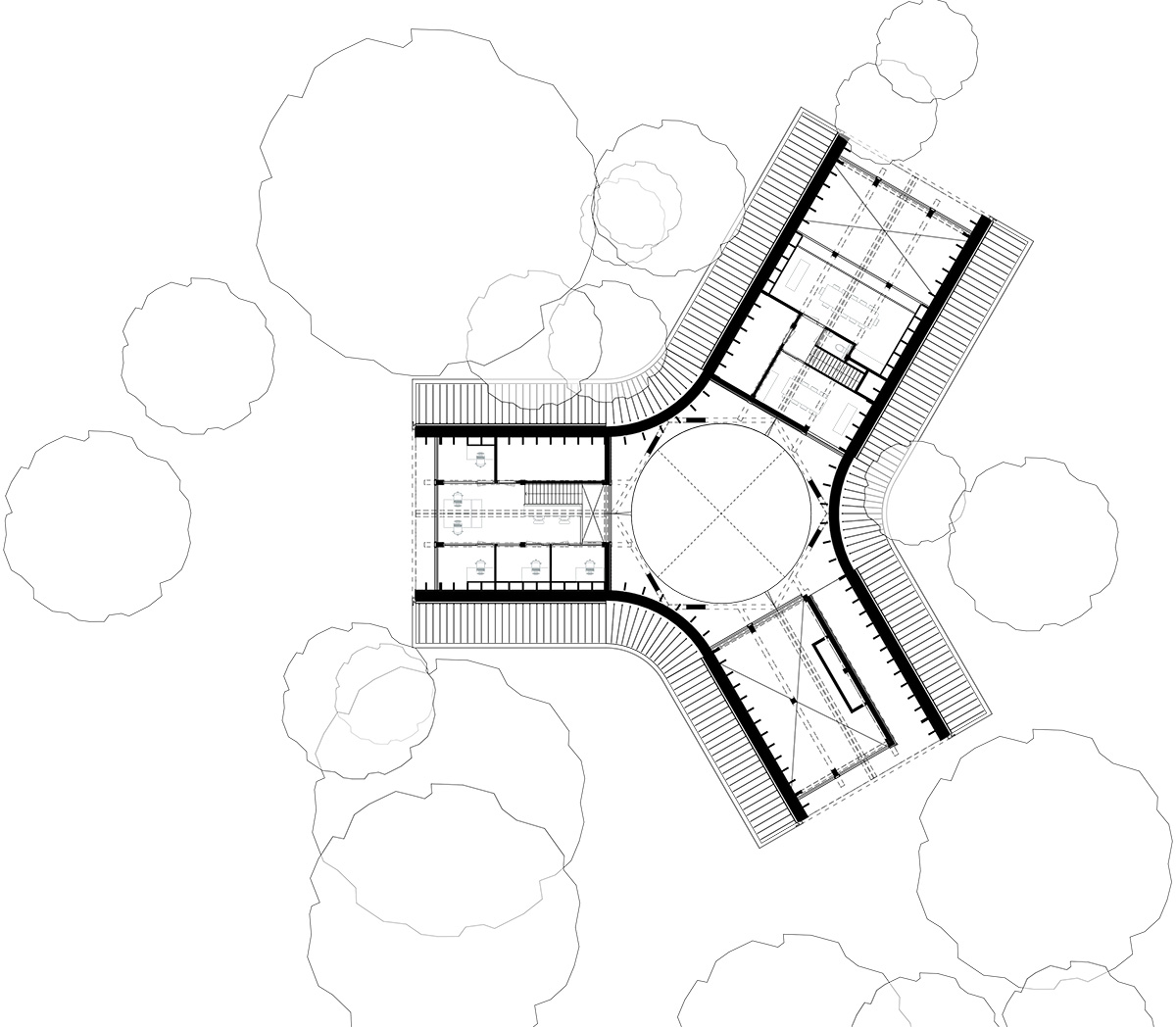 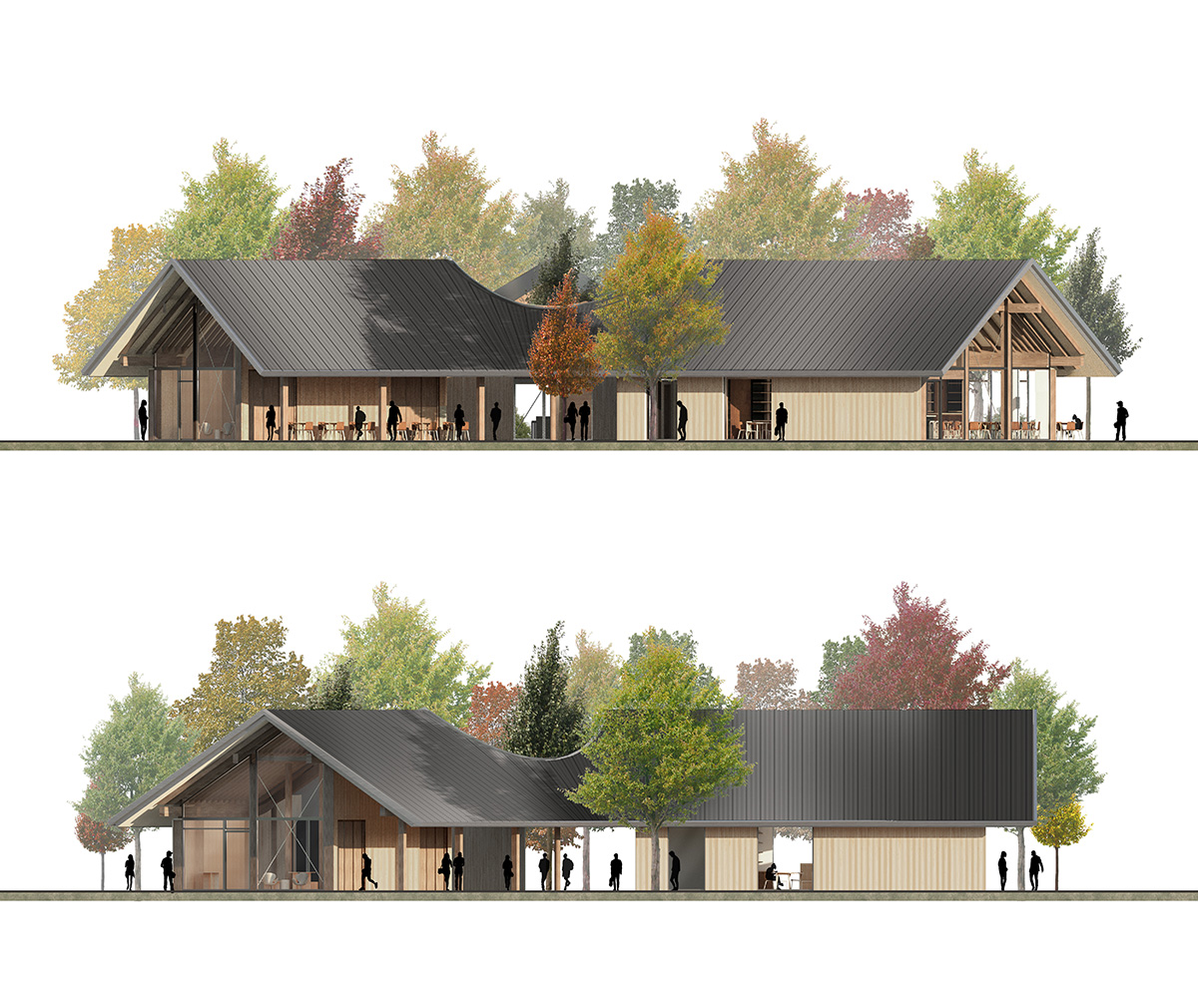 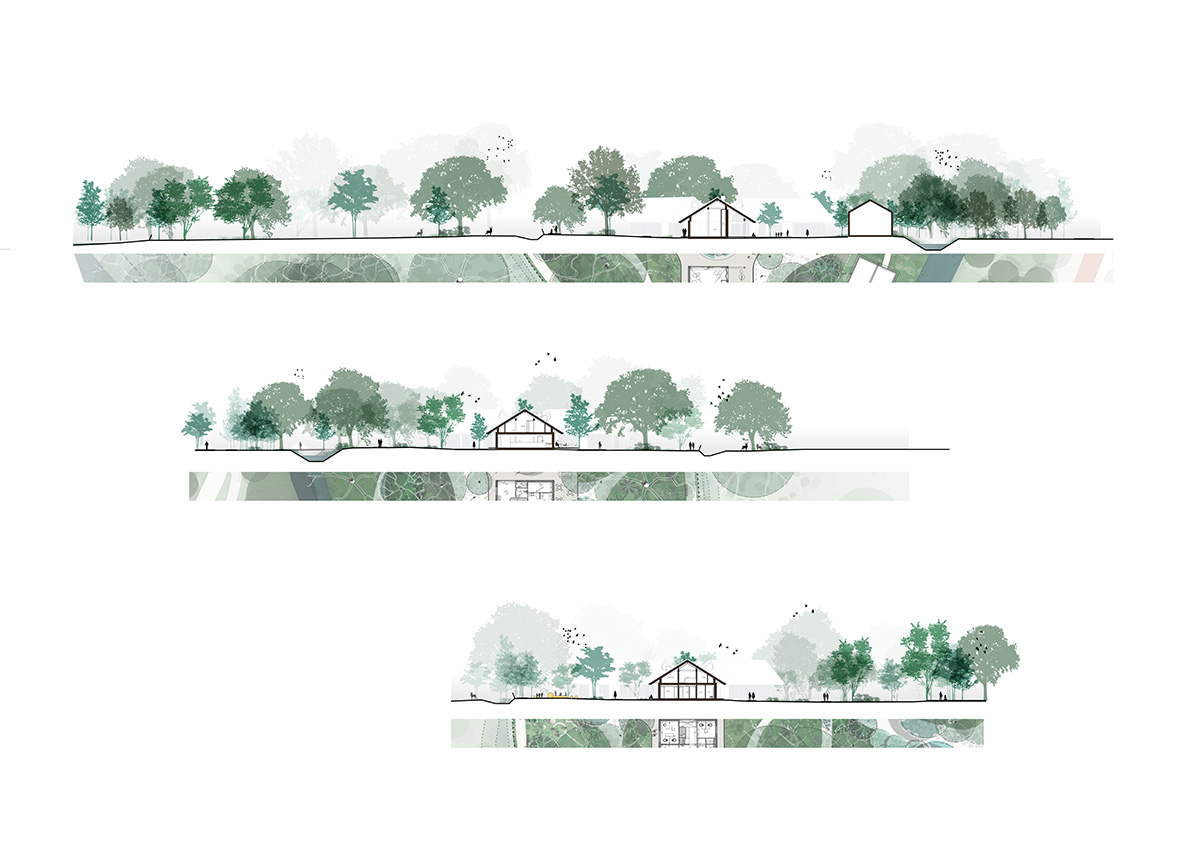 A guest in the landscape. Image courtesy of Powerhouse Company and DELVA

Powerhouse Company and DELVA Landscape Architecture | Urbanism are collaborating on other projects, including the transformation of Rotterdam's Iconic Central Library, IBM Headquarters in Amsterdam, THIS. mixed-use complex in Amsterdam.