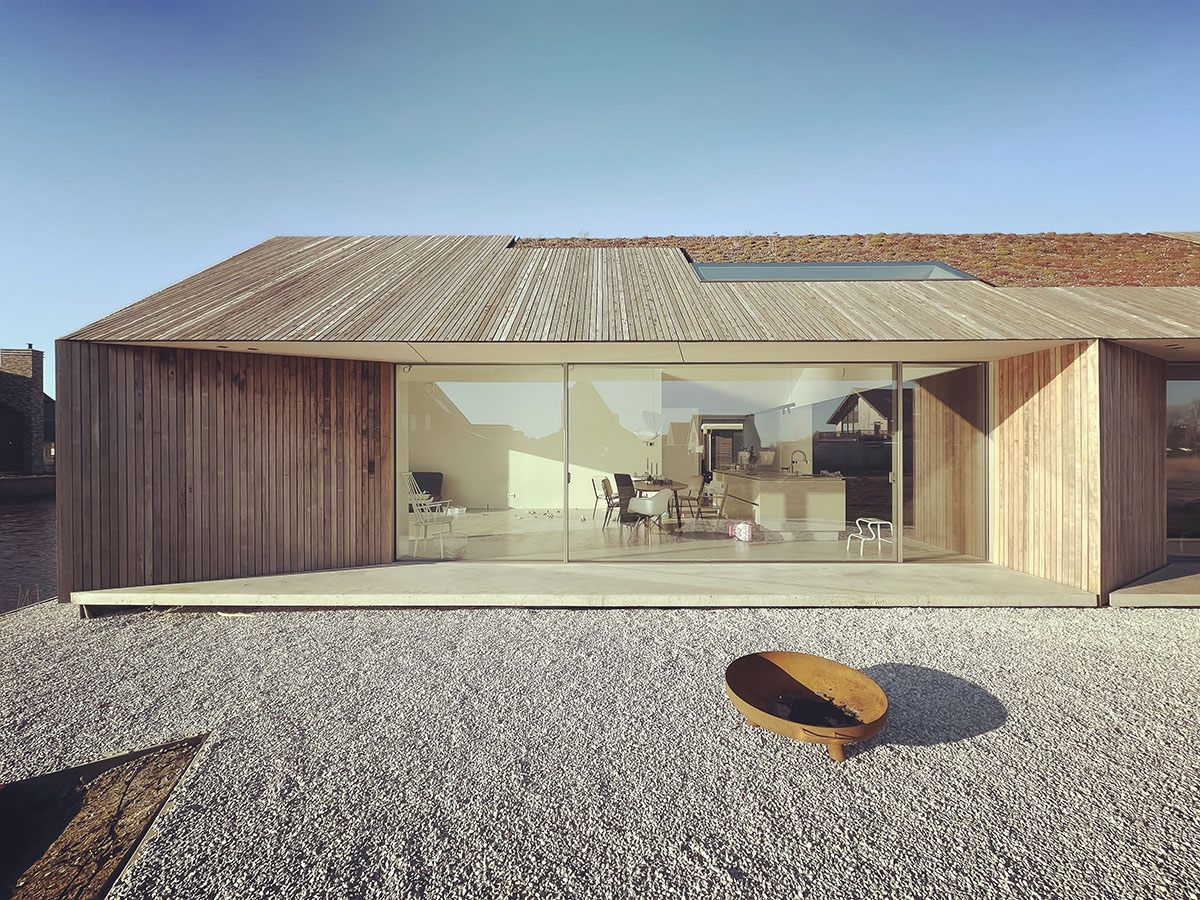 Dutch studio Francois Verhoeven Architects has built a wood-frame family house that features a sloping roof in the village of Eelderwolde, the Netherlands.

Called Villa K2, the 250-square-metre house is designed for a family of five in the North of the Netherlands and shaped according to the area's constraints, as the area is prone to small earthquakes because of the natural gas winnings over the past 30 years. 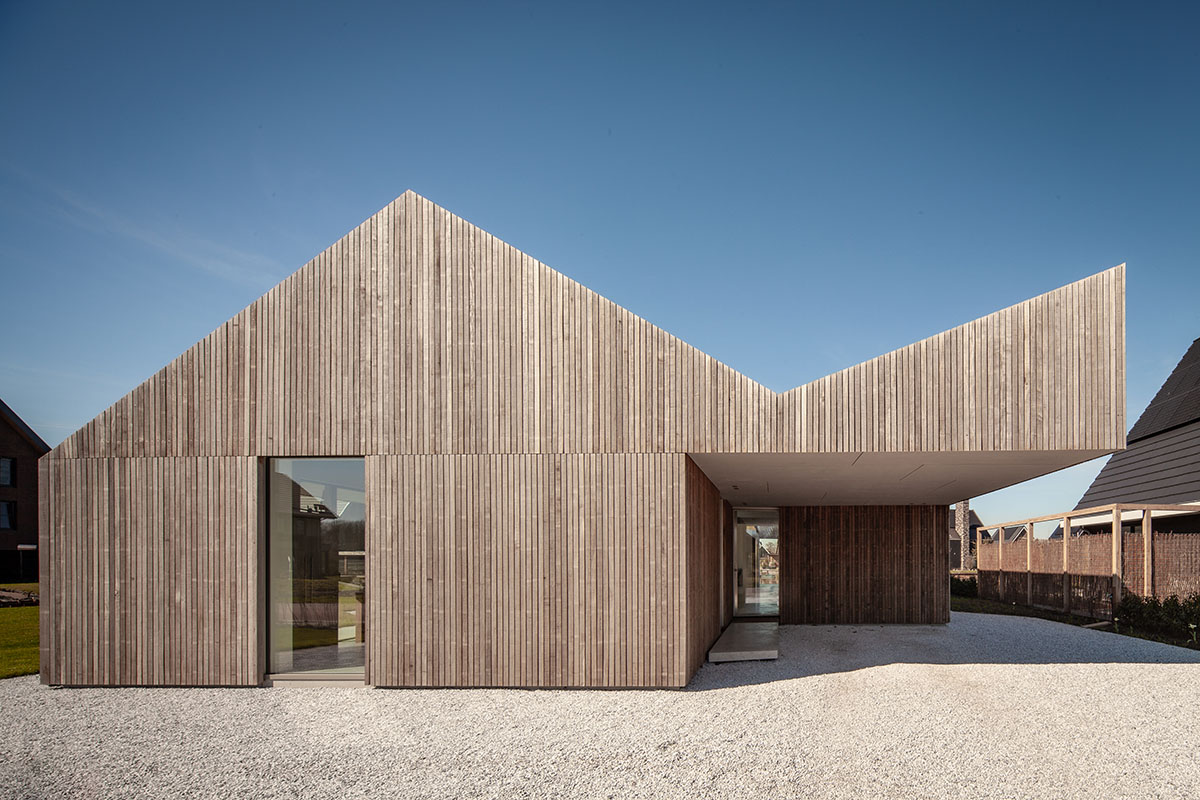 Made of wood-frame construction, the house is a single-storey house that features natural colours in either black or brown.

Designed according to the landscaping and building codes, the existing parameters mandated to create sloped roofs with minimalist volume. 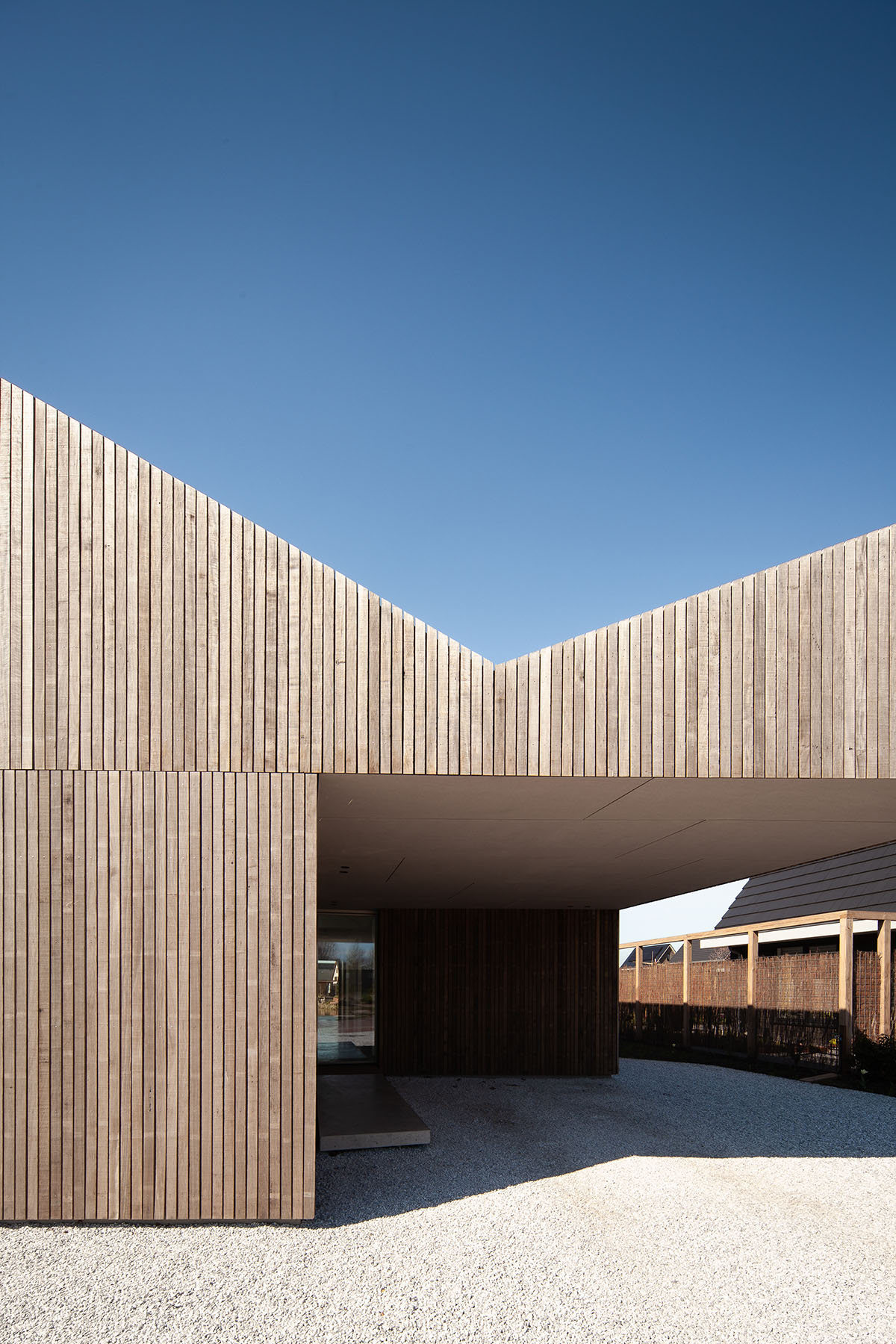 Francois Verhoeven Architects thinks that "looking at the wider area where this house is build the strictly controlled landscaping and city planning worked out very well."

Even though the project is minimalistic and designed as a bungalow of one story it does fit in well between the more conventional multi story houses that surround K2. 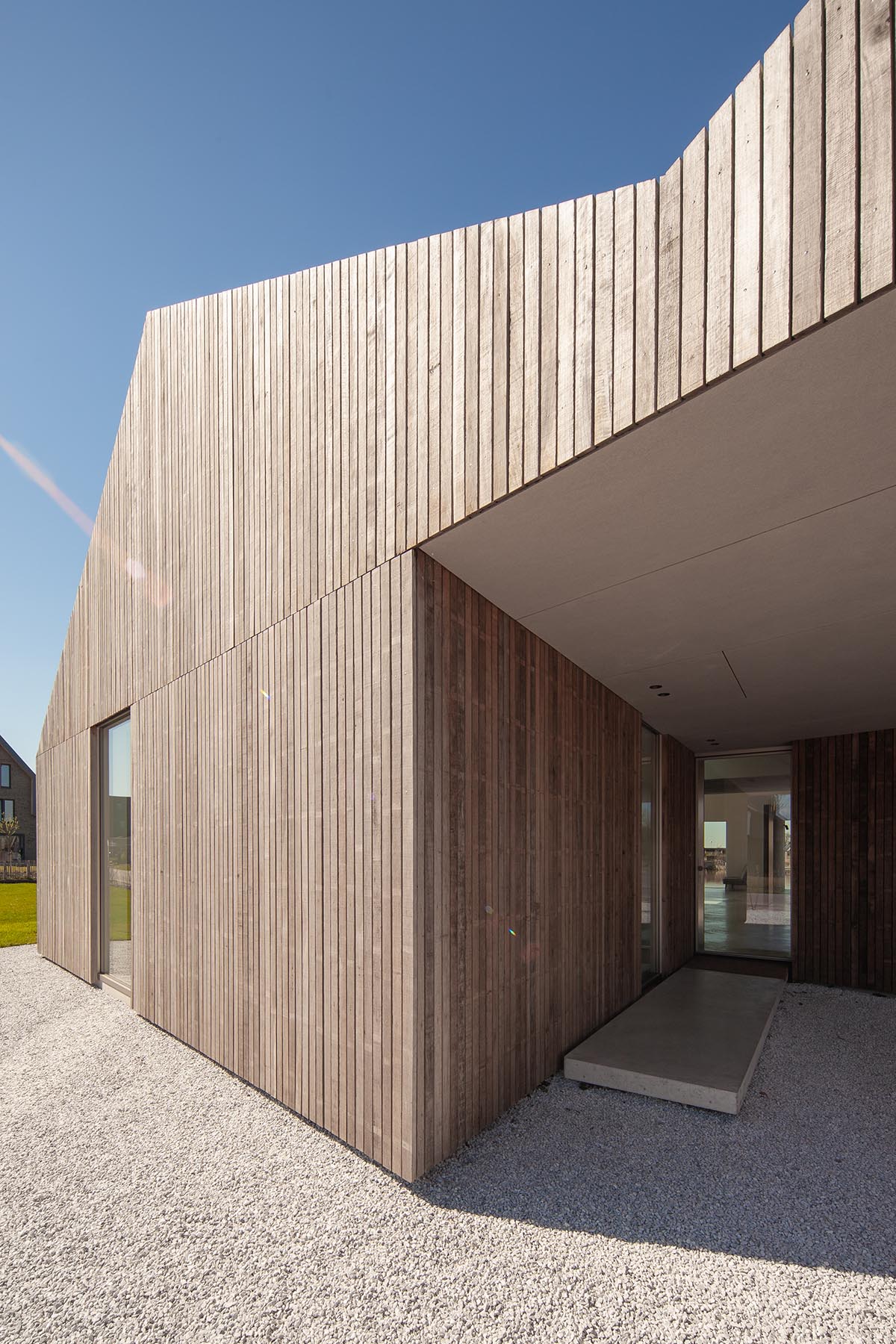 Villa K2 has largely glazing façade facing south, while the north facade has much less glass. The south facade has an overhang to prevent the sun from heating up the house in the summer while letting the sun in freely in the winter. According to the studio, "energy consumption should almost be none." 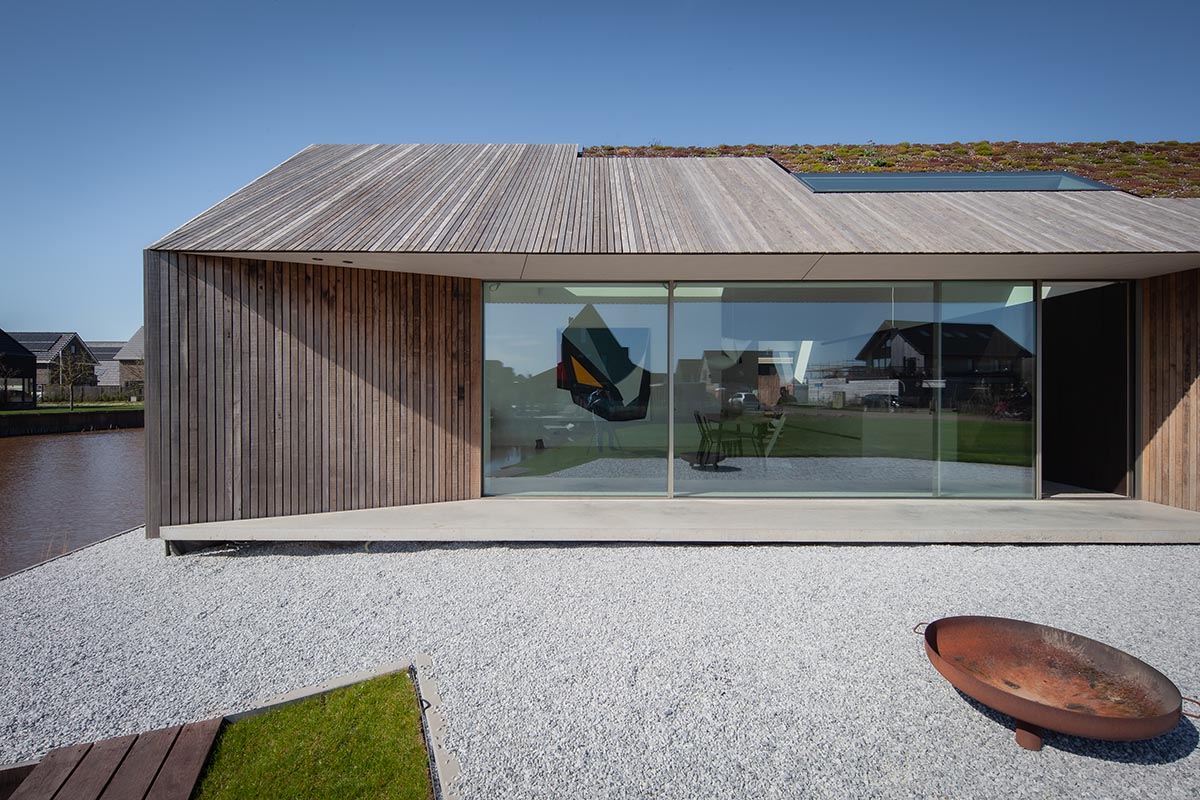 The house takes its energy from solar panels and a geothermal heat pump. The studio has given special attention to the solar panels that are not not visible at first sight. Although the roof is designed to have three sloped roof areas, the area out of sight is clad by the solar panels. 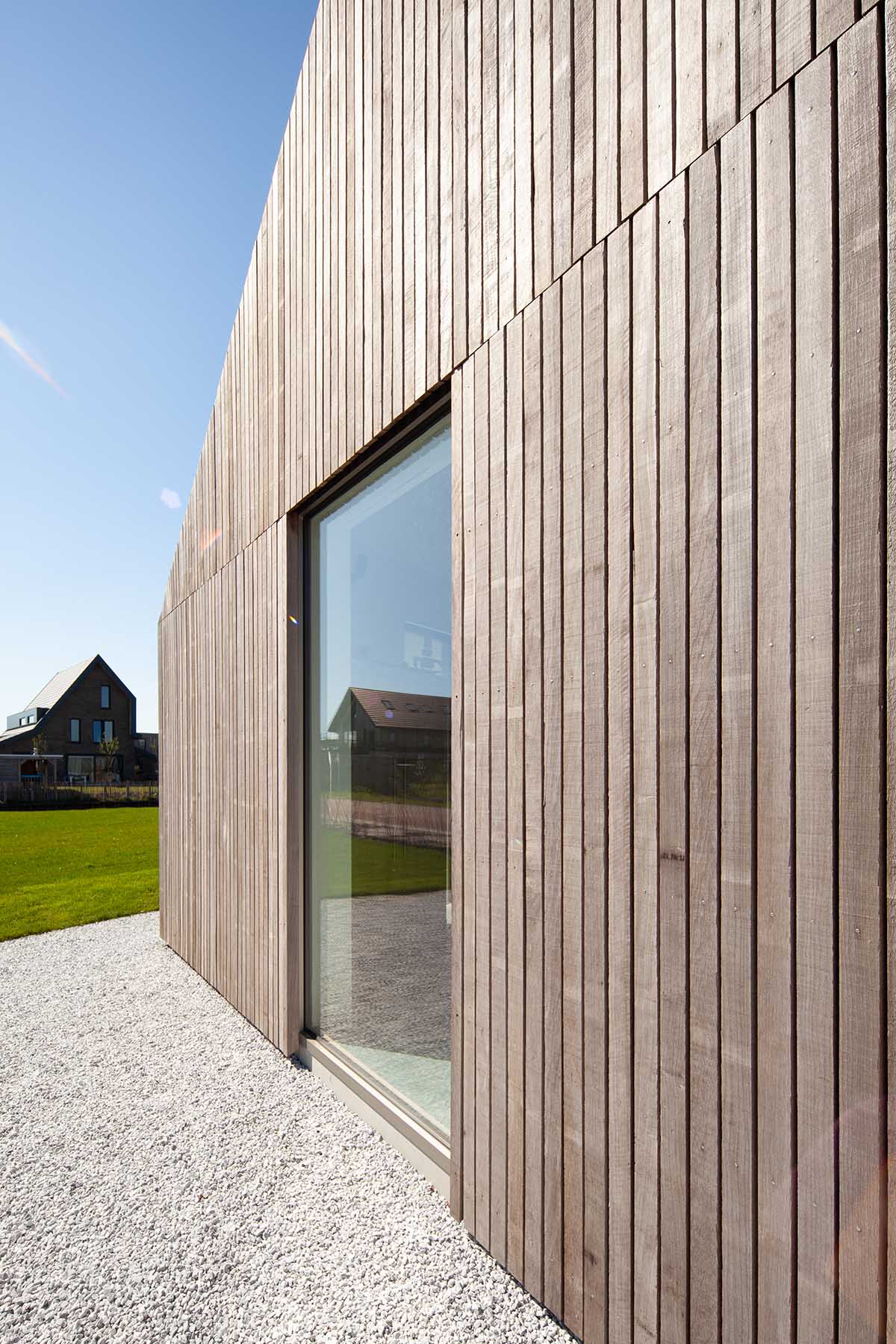 "The roof area facing south and in sight is covered with vegetation and wood siding. This is an important architectural statement," said Francois Verhoeven Architects.

"Solar panels are here to stay and a good clean source of energy but we do not need to live with their dominant and slick appearance. Where possible solar panels can do their work out of sight."

"K2 that way has a much more natural and less technical look than many of the houses around it that have solar panels dominate aesthetics," the studio added. 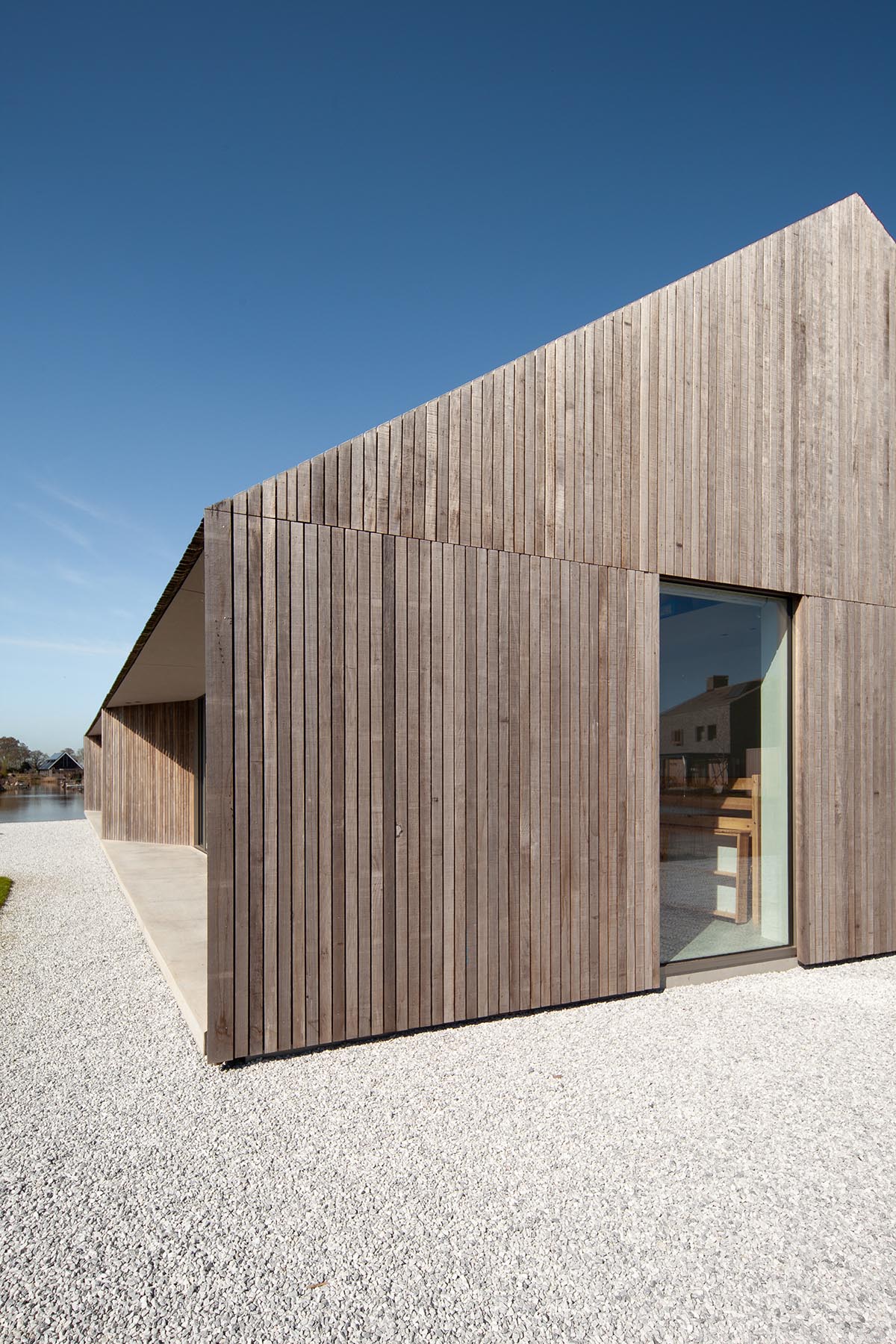 For material choice, the studio prefers to use mostly wood, concrete and anodized in a warmer tint of aluminum as the main materials.

The aluminum and slender window frames combined with sawn timbers for the siding are left untreated, since they are aimed to be seen as they are in their process of weathering.

According to the office, the house needed very little maintenance while getting its final look and feel for the next few years. 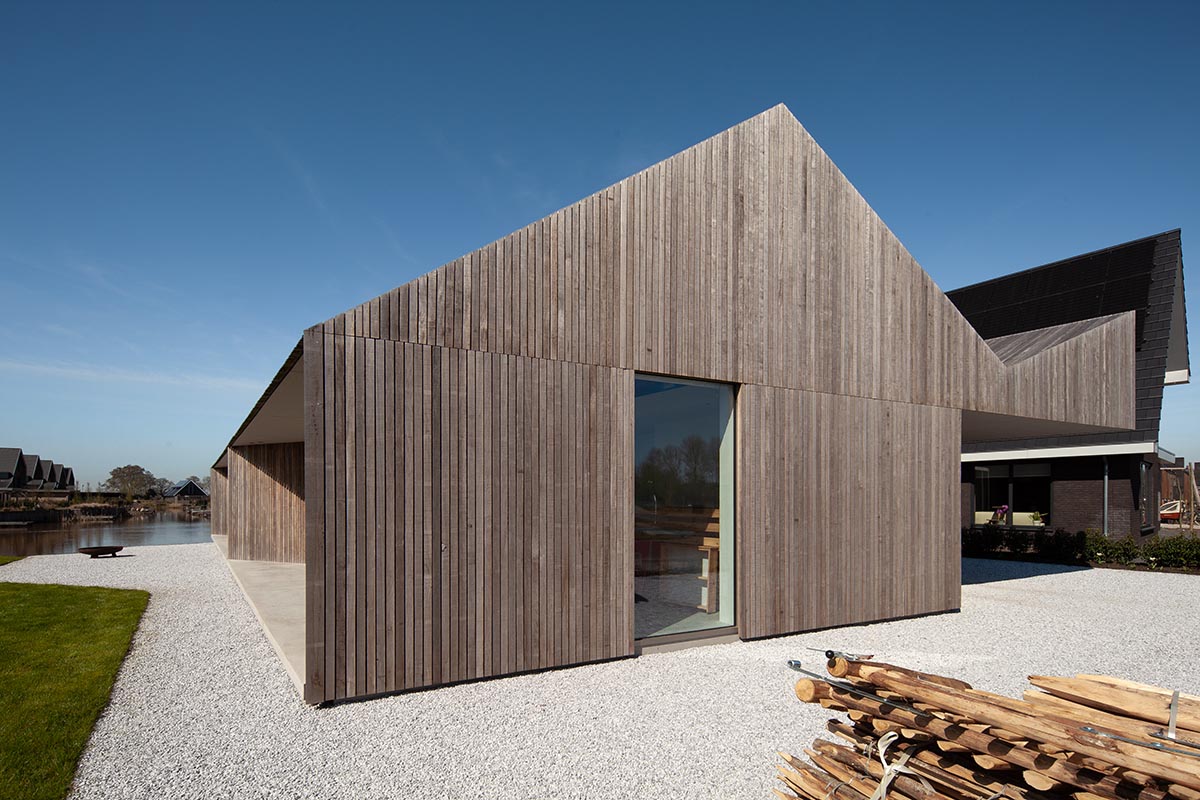 The vegetation will get higher and more colorful, the wood facing the sun more grey. The aluminum and concrete terraces will hardly change at all making sure the house will keep its modern and fresh look.

Compared to the usual Dutch hallways, the house has a large hall. The studio believes that "this is an important feature of the house." 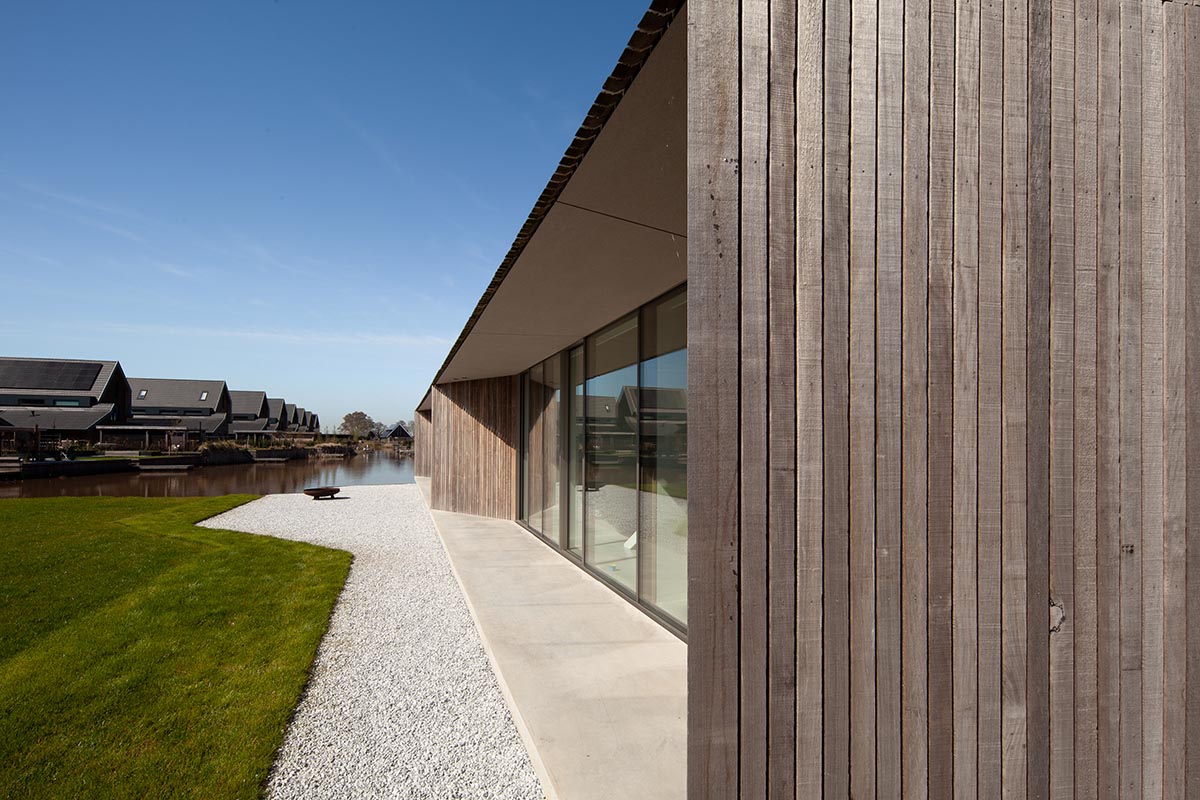 "It's the hall where you change coats and put your shoes on every day. It's where you receive your guests. It's the first space of your house that connects to all others."

"It should be a whole lot more than just functional. The entrance of the house is shaped by a large column-free overhang where a car can be parked." Ideal in the Dutch climate with lots of rain and wind. In the winter there is no need to scrape off the frost of car windows when parked underneath the overhang. 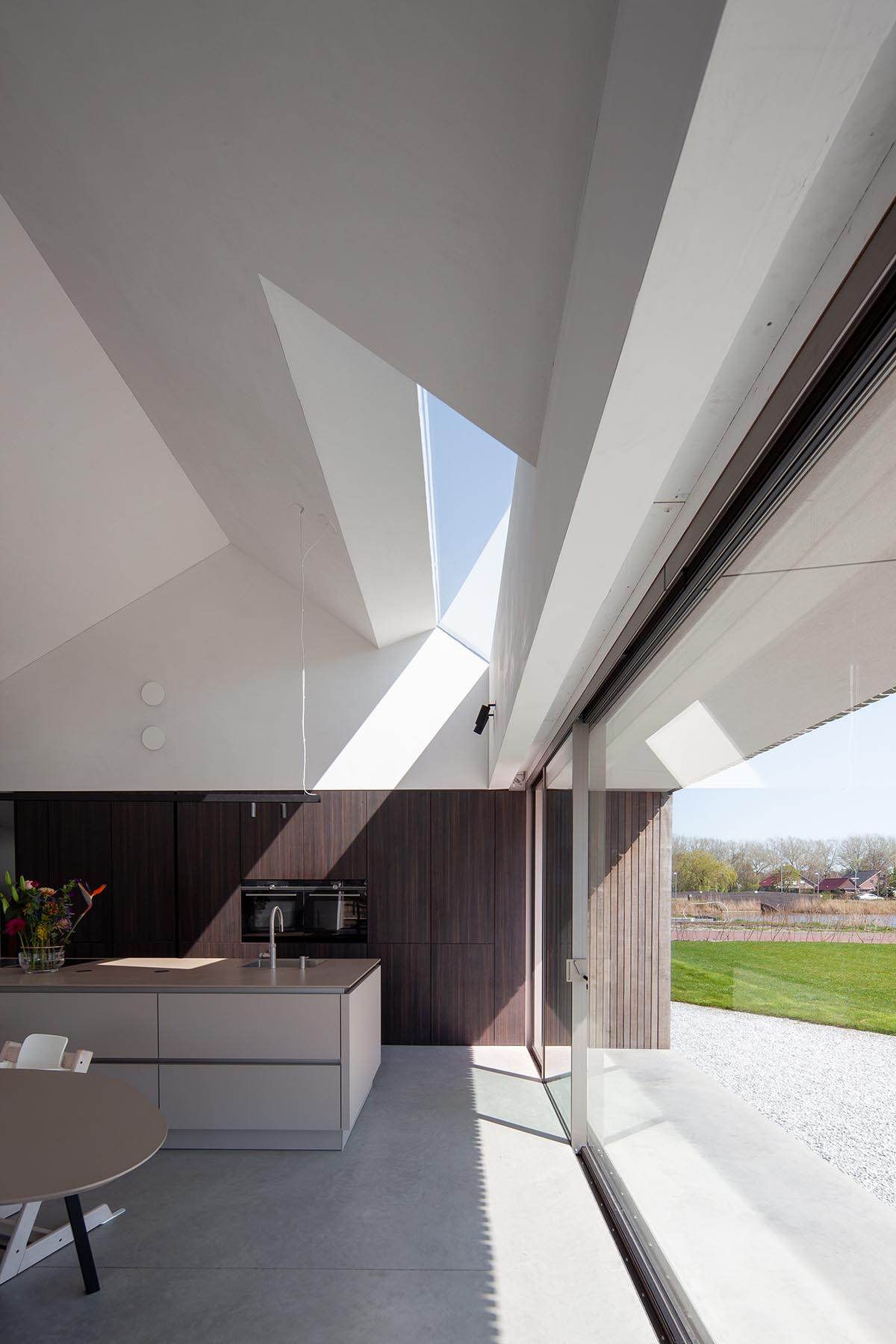 And with a family of three getting in and out of the car is so much more comfortable this way even compared to a garage. The house has minimalist details, free of gutters and roof edges.

The window frames are integrated into the walls and behind the siding. It seems to look through the roof lights as if the walls extend into the sky without any frame between wall stucco and glass. These details are important to make sure they don’t distract from the spacial quality and character of the house. It isn’t always easy to build like this but once all is done most see it was worth it. 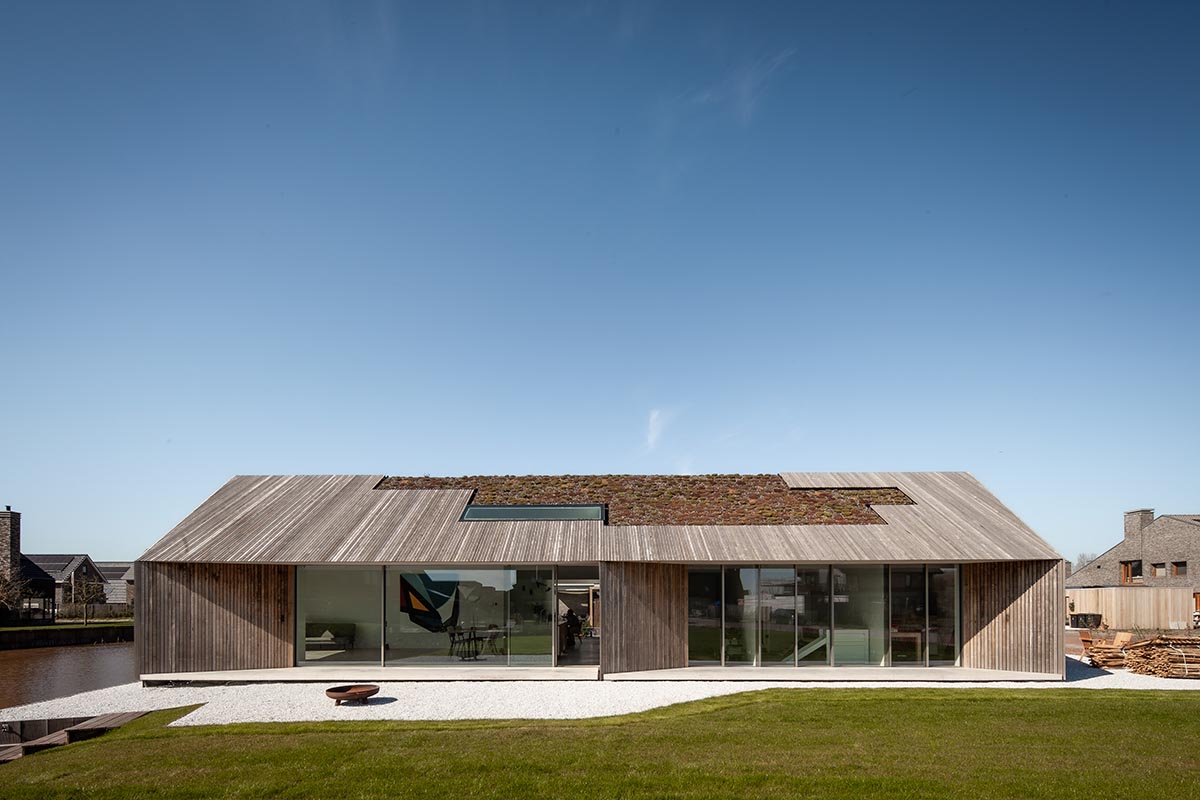 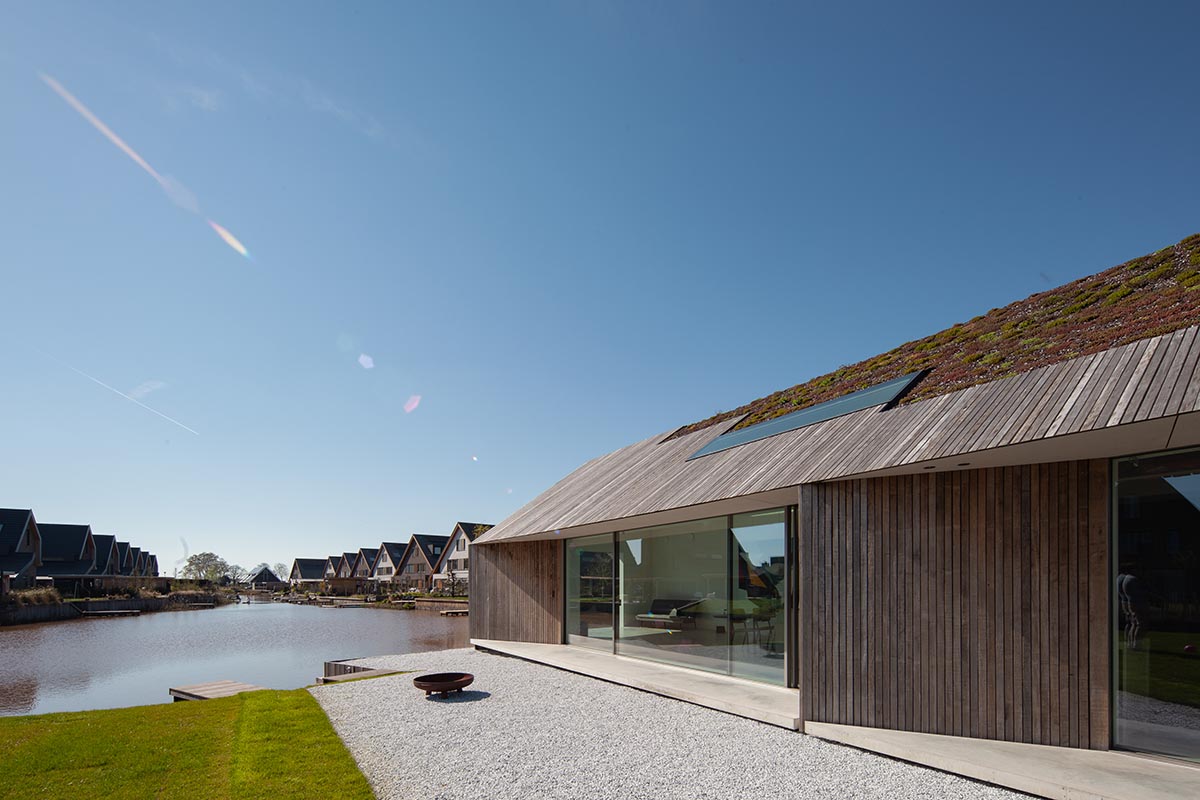 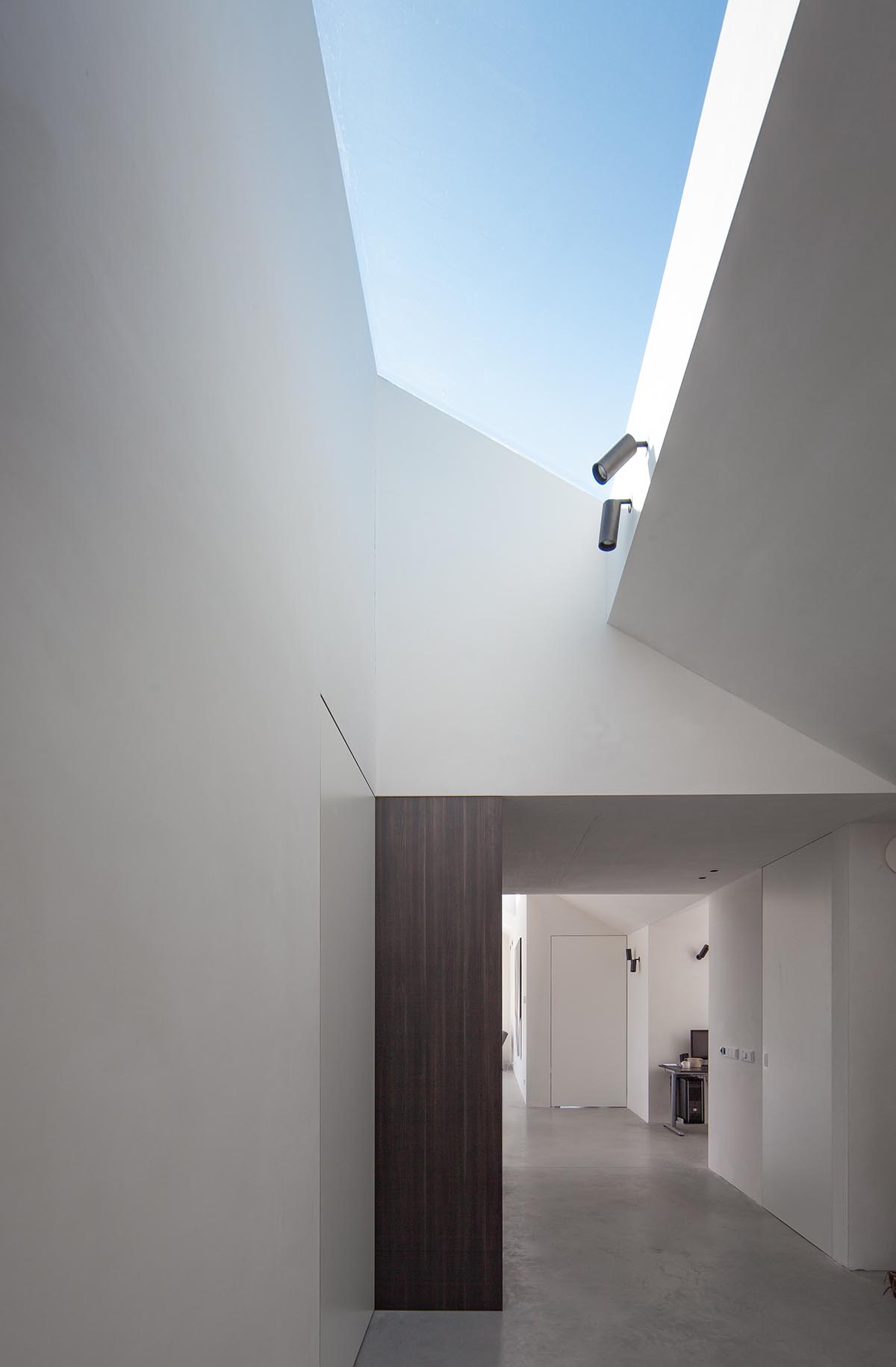 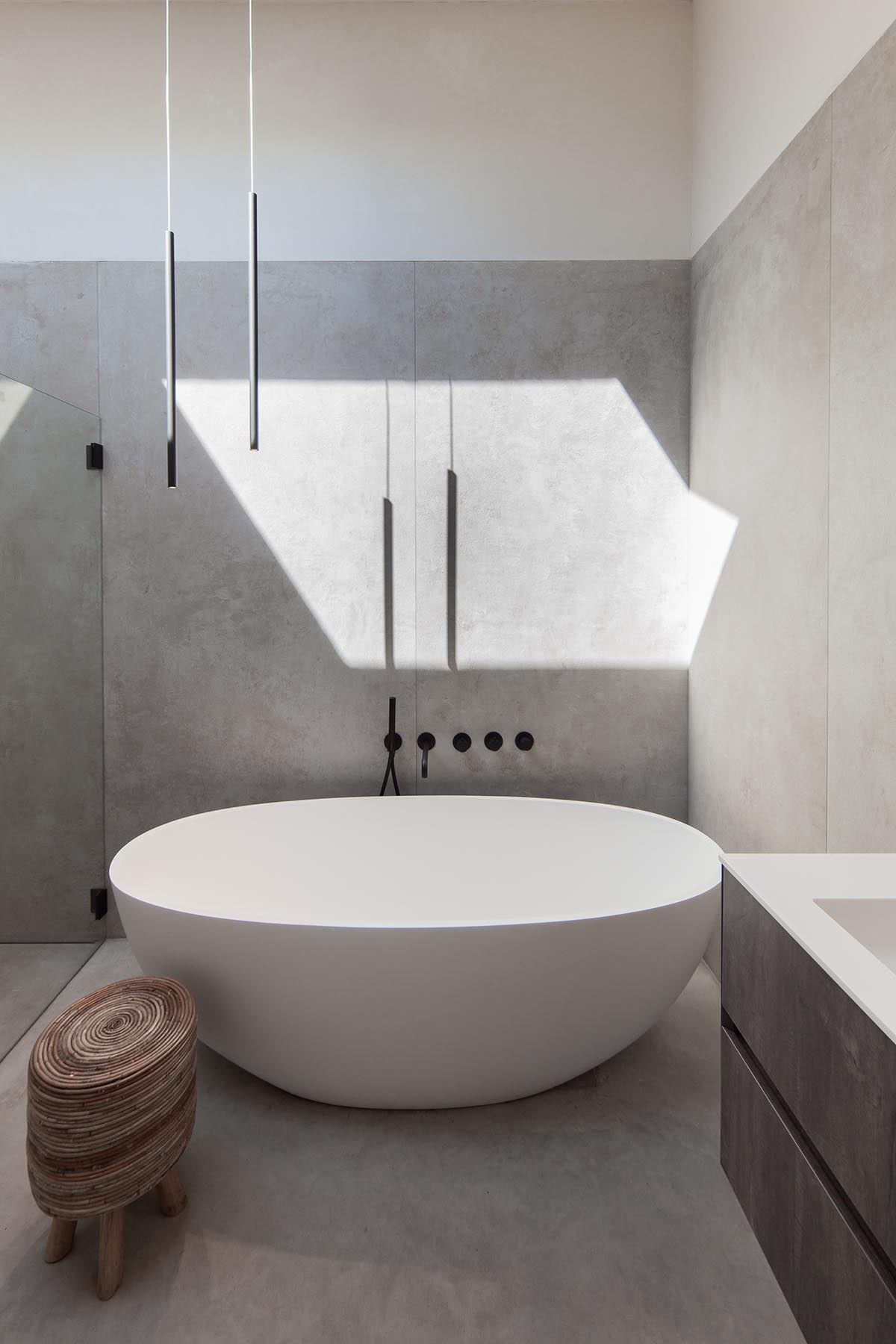 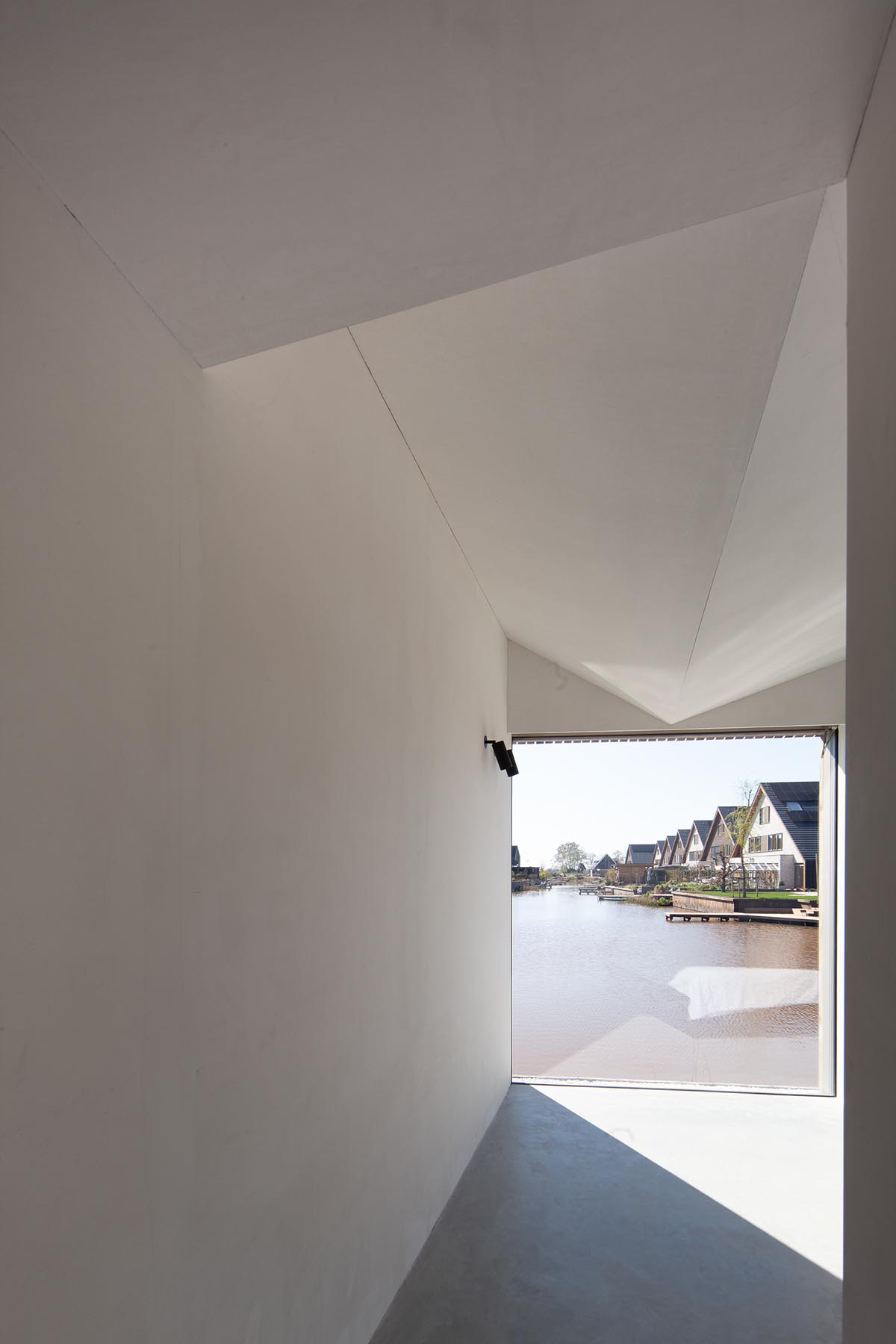 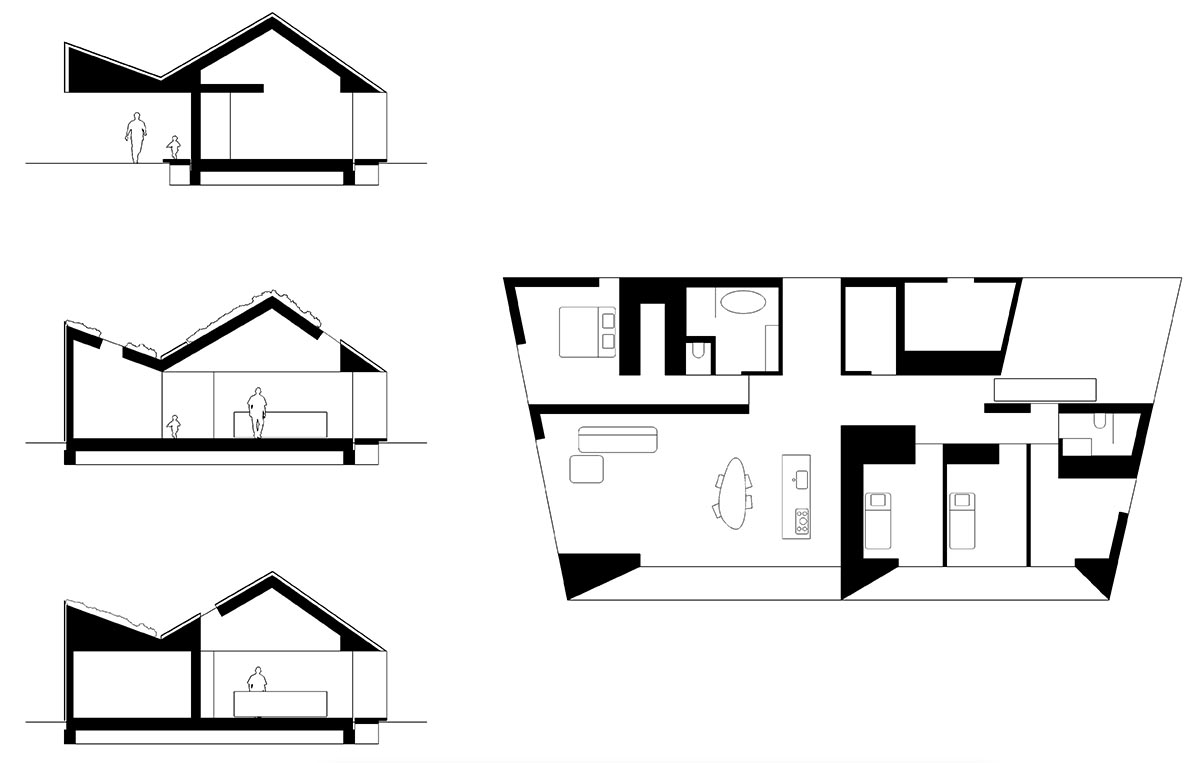