Chosen out of five leading (inter)national consortia, the team will upgrade and renew the Rotterdam Central Library, known as a city landmark from the early 1980s designed by Van den Broek & Bakema. 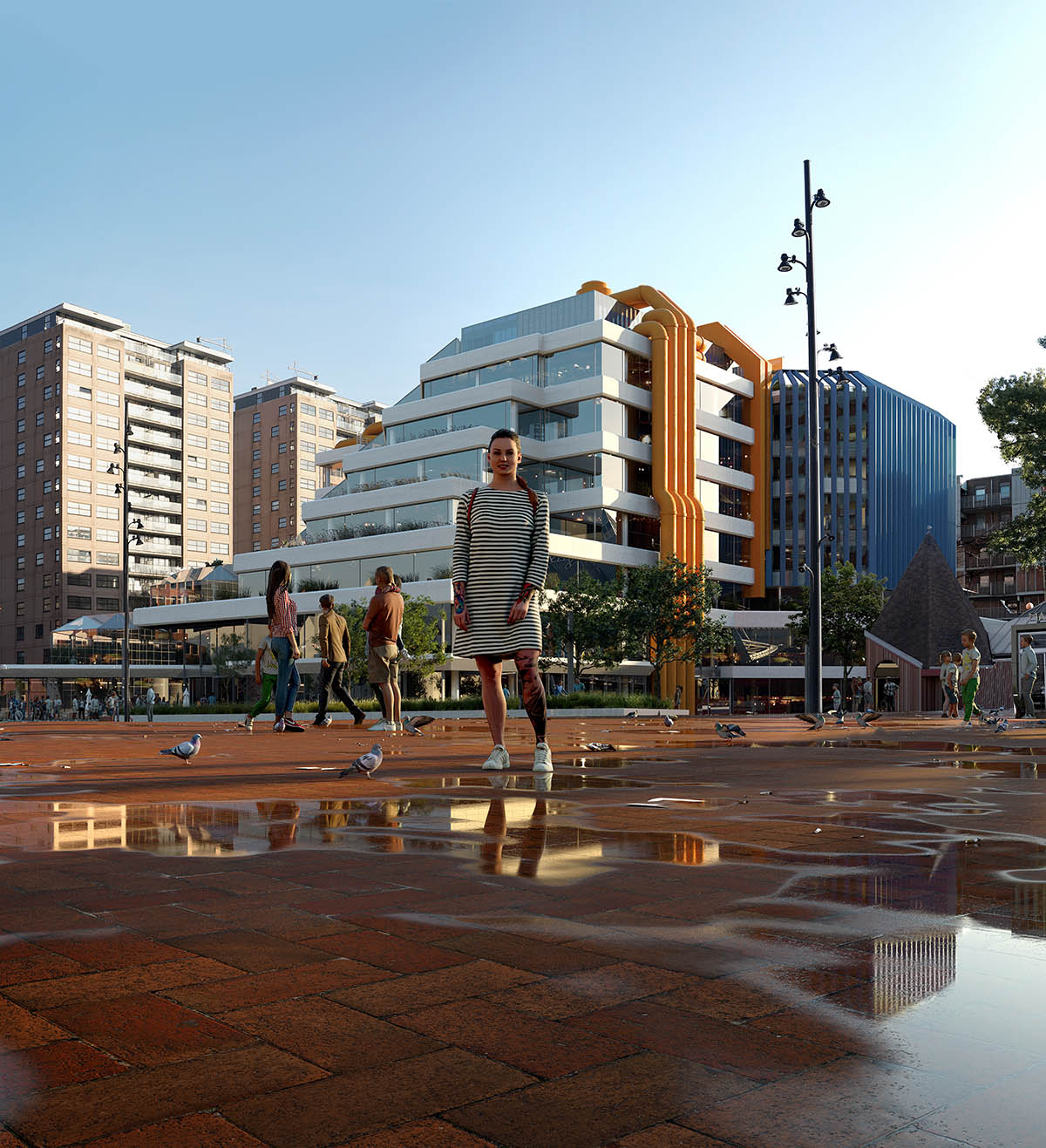 The historic Rotterdam Central Library is a great modernist example of its time with its 6-storey cascading facade, industrial elements and angular, big yellow tubes that evoke Paris' Centre Pompidou by Richard Rogers and Renzo Piano.

Construction is expected to begin late 2025 and be completed by the end of 2028, the year marking the building’s 45th anniversary. The new design of the library is conceived as "a casebook example of radical reuse that transforms a 1980s building into a future-proof contemporary library". The project combines the expertise of Powerhouse Company, Atelier Oslo, and Lundhagem to adapt the building to today's necessities and demands with well-adapted spaces.

Atelier Oslo, and Lundhagem were responsible for the design of Oslo’s Deichman library in 2020, winner of the 2021 Public Library of the Year Award. 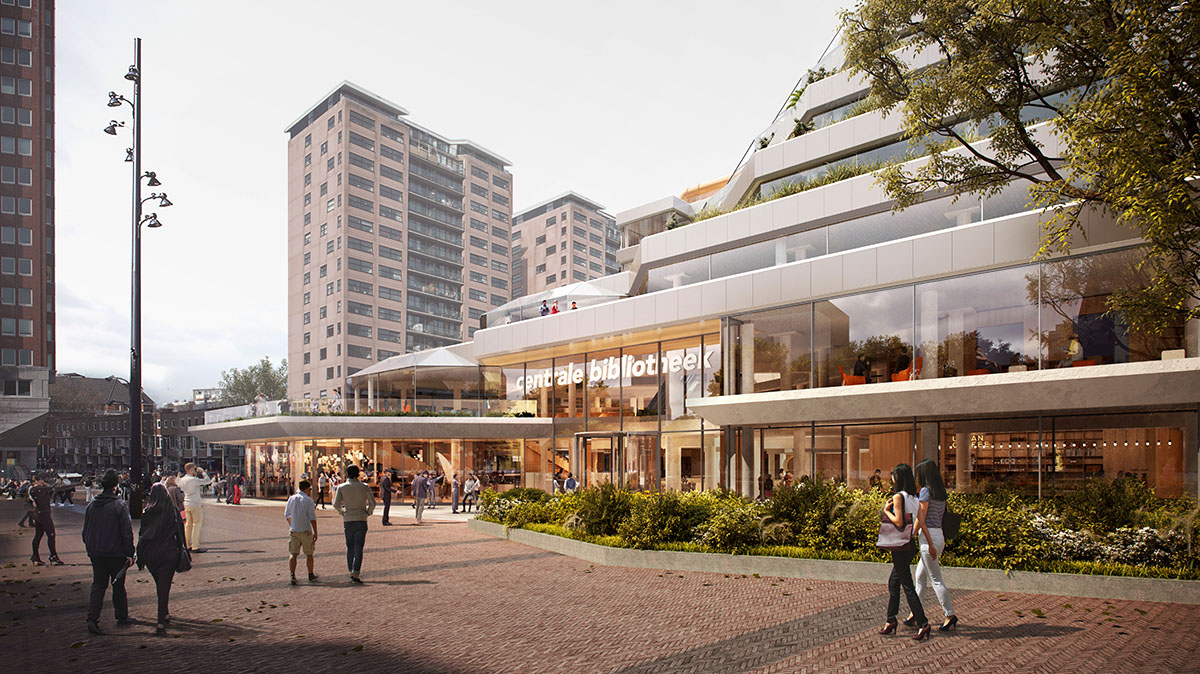 "We transformed the existing spaces for collections and storage into an open and welcoming environment for people to meet and work," said Nils Ole Brandtzæg, Atelier Oslo.

Aiming to create "urban living room of the future", the design is envisioned to be a striking example of reuse, while maintaining the importance of the building in urban architecture. 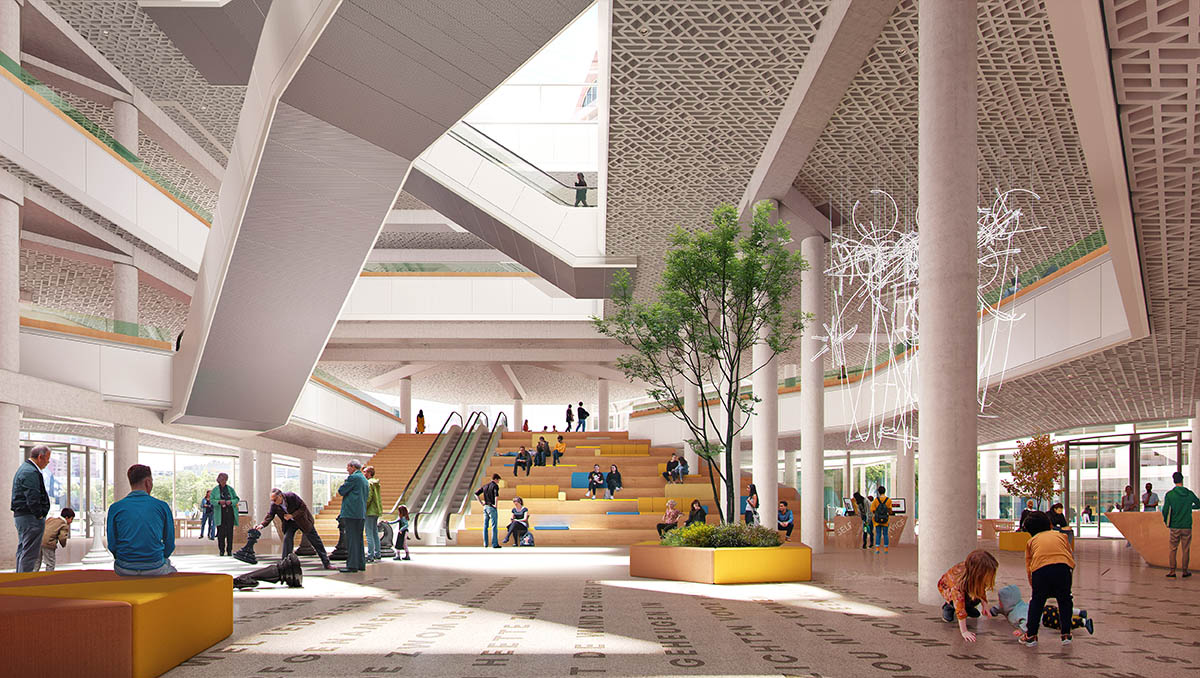 The library integrates contemporary standards of sustainability and circularity

"In the interests of sustainability and preserving the memory of the city, the last-century library is successfully reinvented for a new era," said Powerhouse Company.

"For the team, this was a golden opportunity to optimize the original, spectacularly eccentric, design, which was downgraded by budget restrictions." 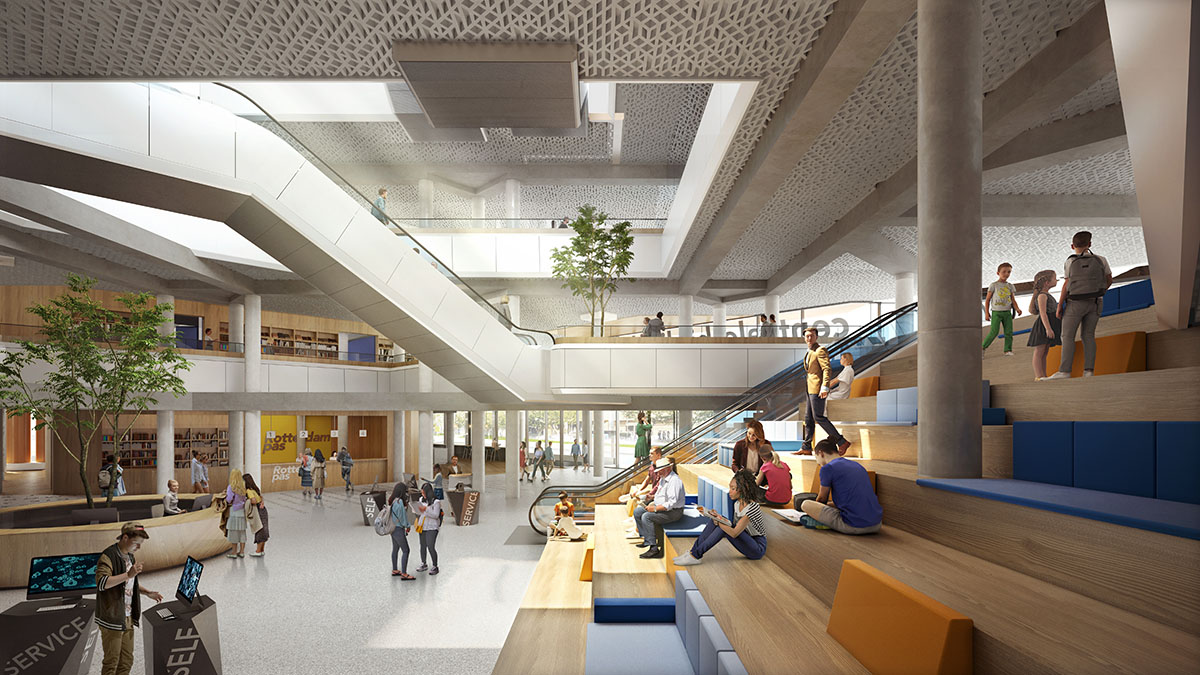 The renewal scheme aims to maintain the original ideas behind the library and creates an intimate "living room for the city", while enhancing an iconic piece of public architecture for a city synonymous with experimental buildings and bringing it in line with contemporary standards of sustainability and circularity. 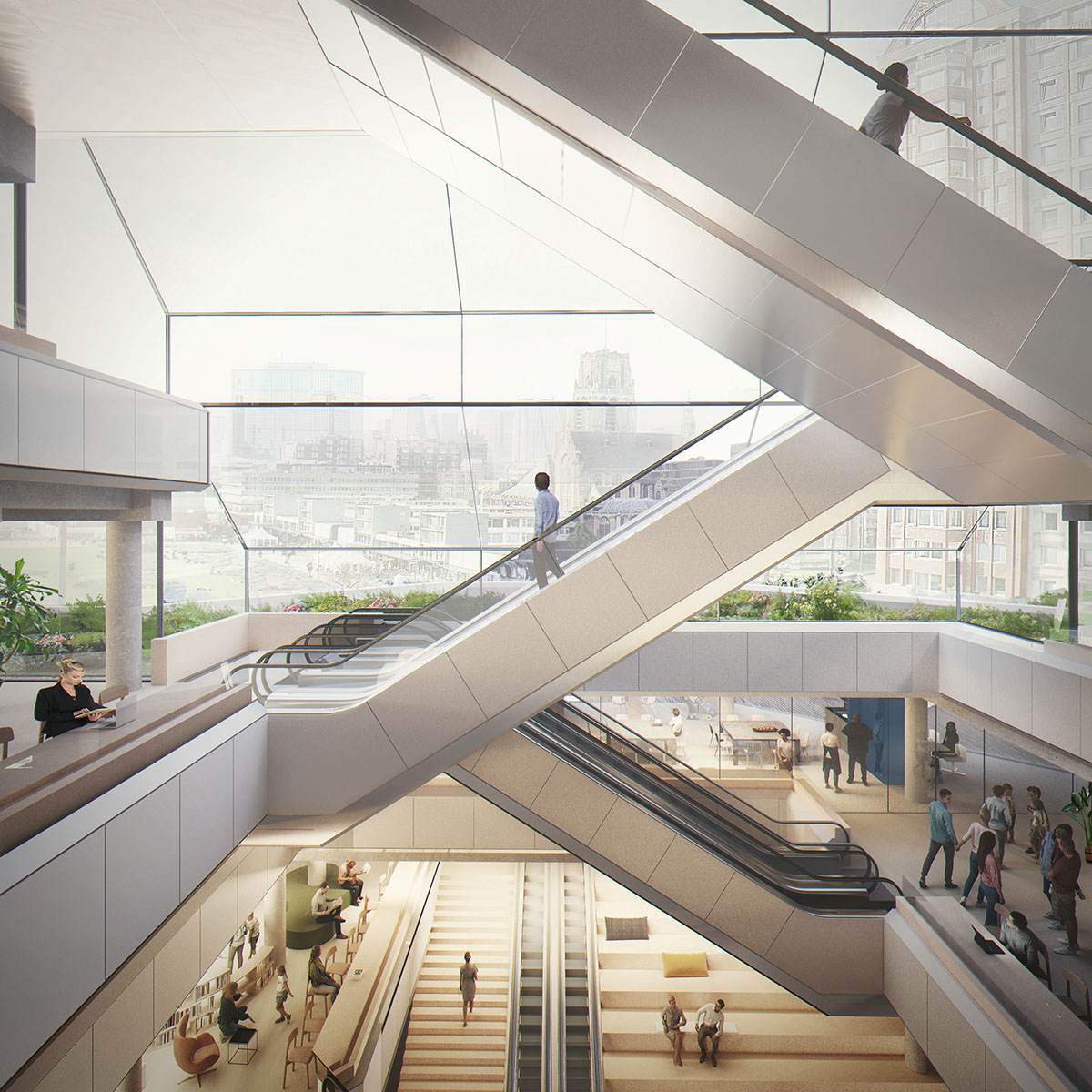 Rotterdam Central Library is one of the city’s best-known landmarks, and instantly recognizable with its clusters of big yellow tubes that similar to Paris' iconic Centre Pompidou - which is a great example of high-tech architecture movement.

Built by Van den Broek & Bakema with Hans Boot, the library opened in 1983 to a mixed reception. One of the largest libraries in the Netherlands, still, the library is one of the most controversial buildings of our time. 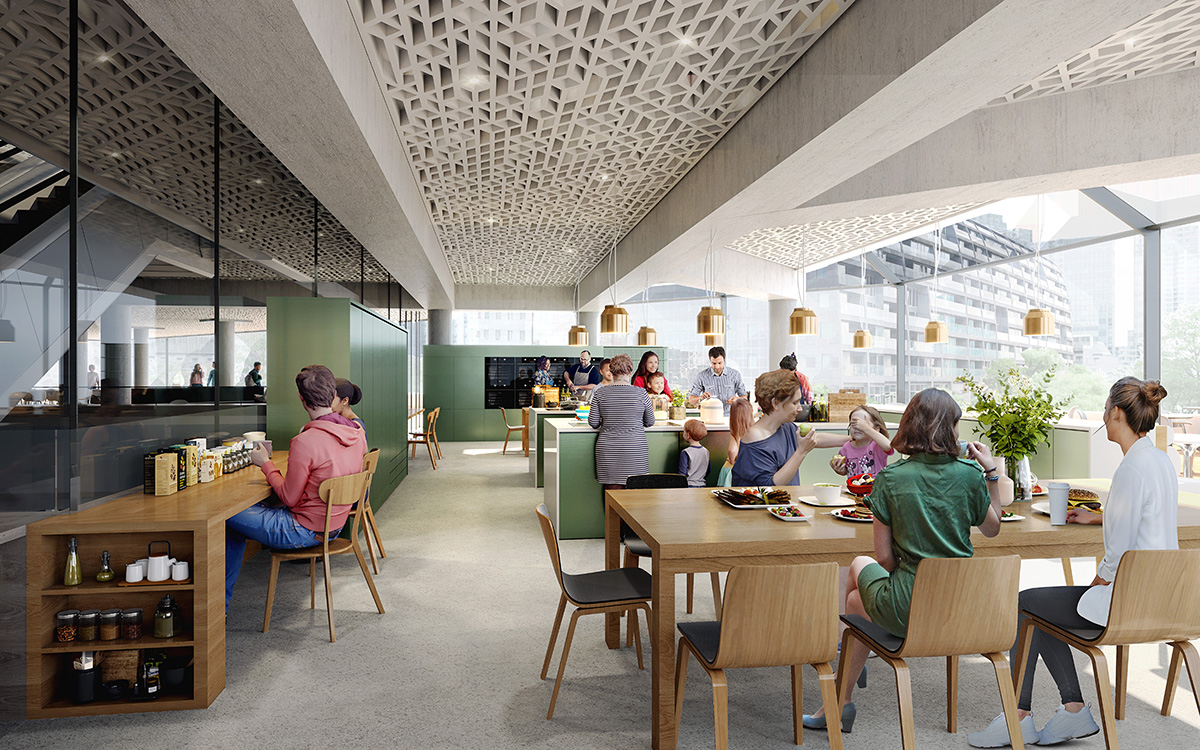 "Our design focuses on returning it to its former glory"

The library fills a square city block and a diagonal cut introduces an orientation on the market square and brings light into the atrium. Over this void a glass "waterfall" reveals a tower of criss-crossing escalators that run the full height of the building.

"The quality of the building couldn’t be optimized back in the 80s. Our design focuses on returning it to its former glory, or rather to the glory it should have had," said Nanne de Ru, Founder Powerhouse Company.

The yellow tubes, which were originally used for air conditioning, remain in use, now taking in untreated air and expelling used air. 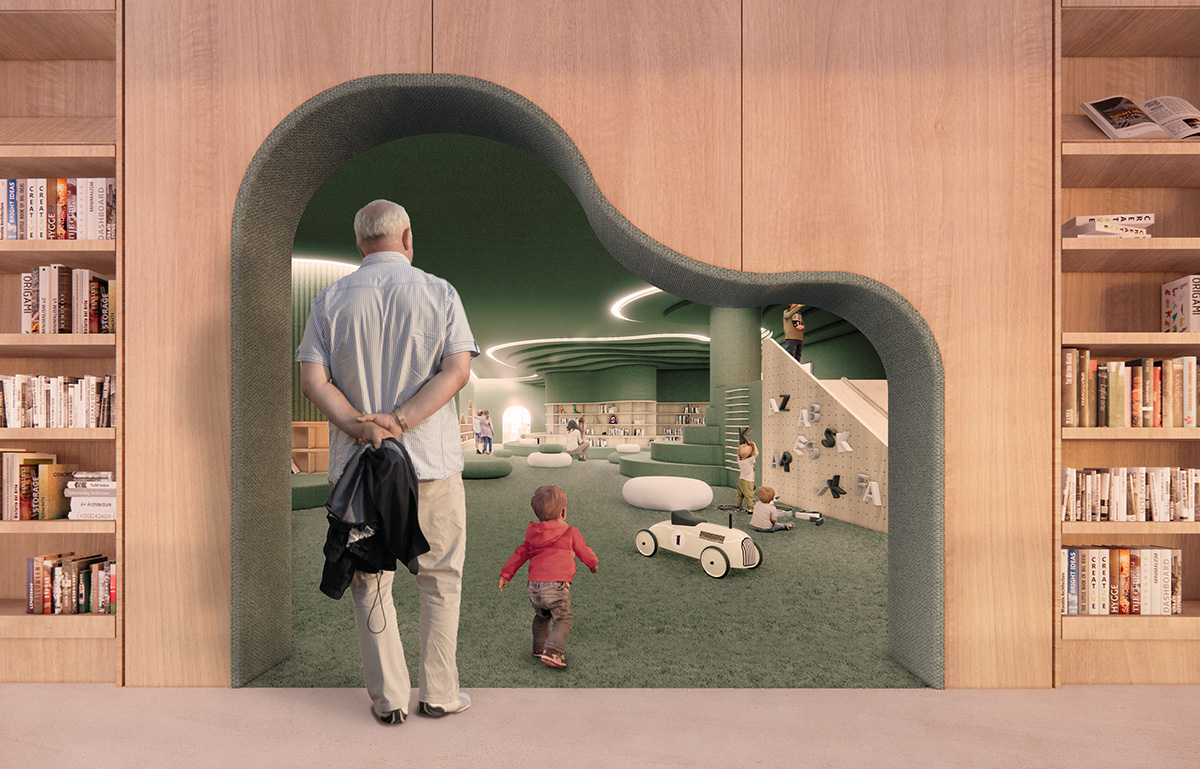 While the tubes are extended to the ground, they become part of the streetscape, tangible and approachable, and even more central to the building’s identity.

The team adds extra floor space, extra light and transparency with a new glazed timber construction at the back of the library – this is blue, like the former storage area it replaces, ensuring that the library keeps its color signature of white, yellow, and blue. 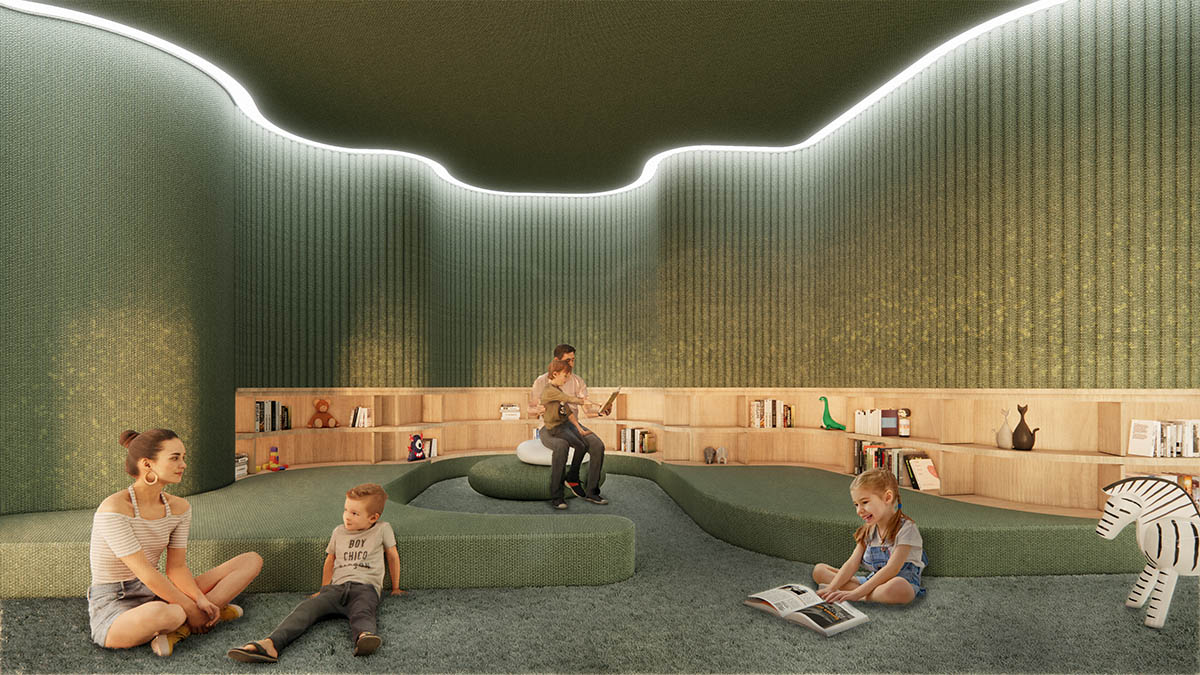 The studio explained that "the former budget particularly impacted the façade with its white bands and strip windows. Transparency was sacrificed for cost-effective but heavy window frames."

"The redesign transforms the glass layer into a seamless expanse, and this new translucency creates a light, fluid spatial experience with unbroken views outside."

The redesign corrects the alignment of the lower crisscrossing escalators, visible through the glass ‘waterfall’, which were somehow wrongly positioned during building. According to the team, they were compromising the rhythm of the design. 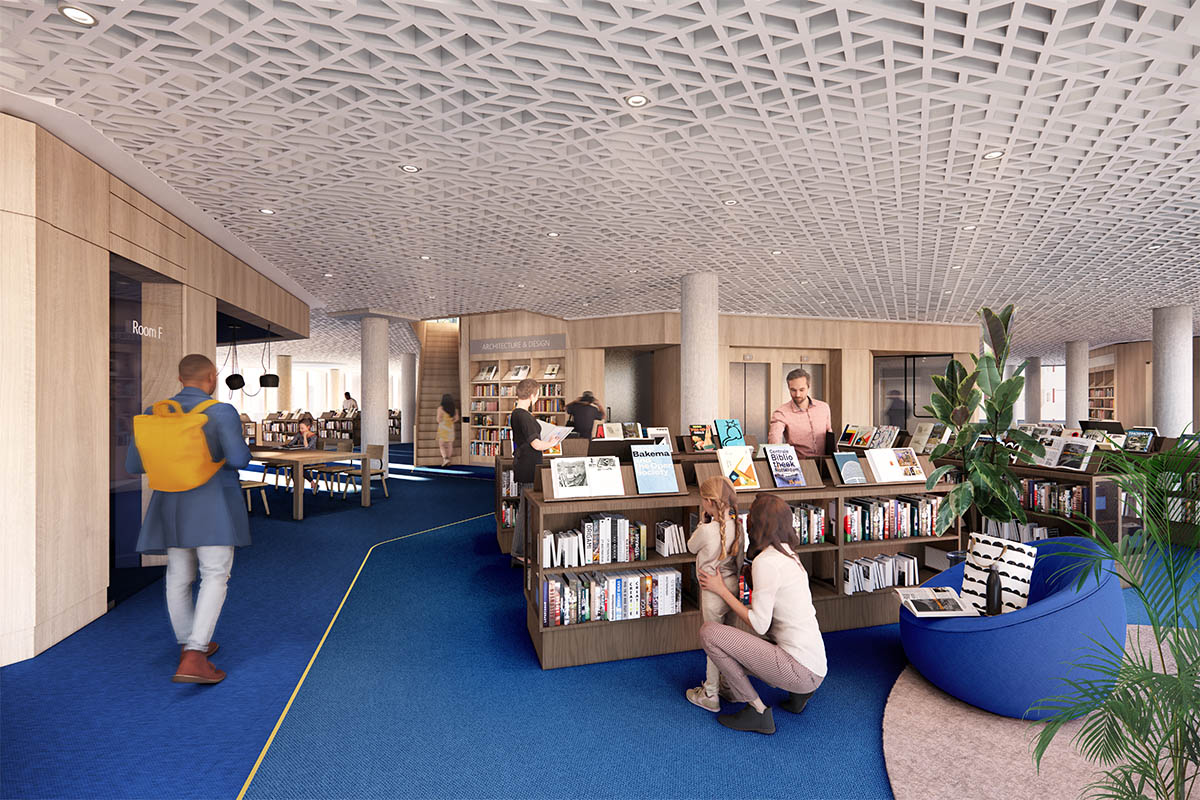 The team enhanced connectivity by adding wooden amphitheater stairs between the floors.

"The cultural and historical characteristics, values, and distinguishing features [of the library] have been effectively studied, interpreted and, where necessary, modernized," said City of Rotterdam and Rotterdam Library Foundation. 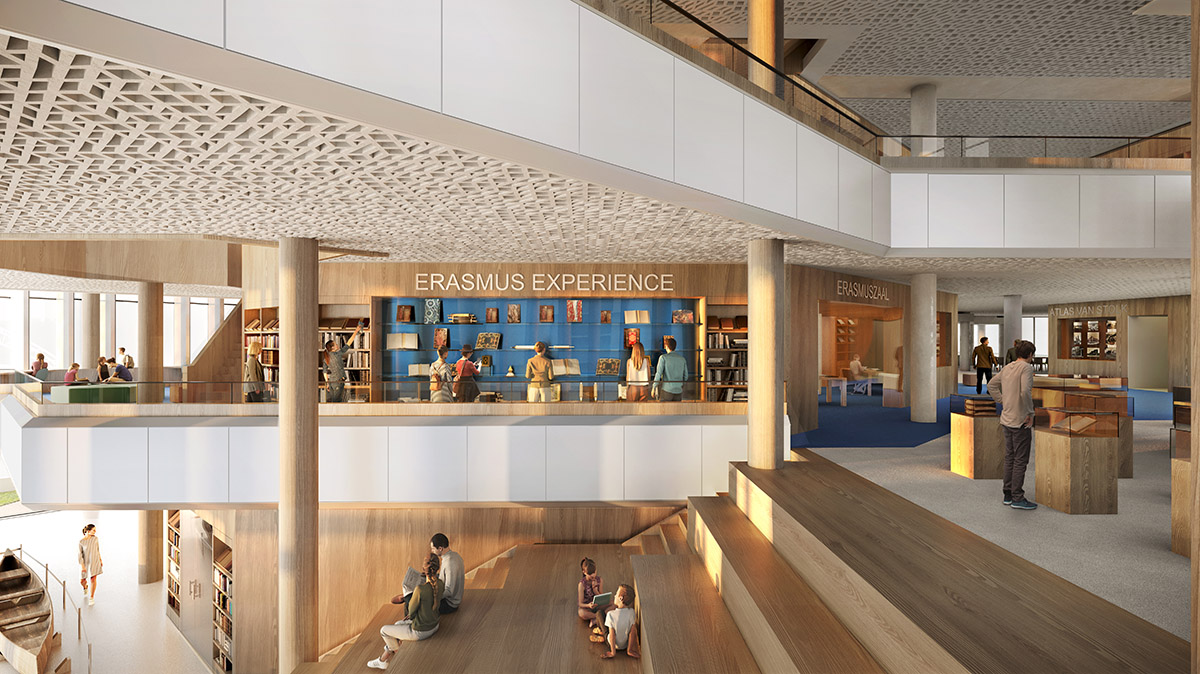 Inside, the interiors are envisioned to offer an intimate, relaxed, and domestic quality. The various interventions to transform and expand the building have resulted in a sequence of spaces capable of housing a lively and flexible program that features everything from a cooking workshop to a kids’ climbing wall – as well as plenty of places for studying, learning, reading or simply browsing.

The upward progression of the spaces culminates on the seventh floor, which houses a green and silent reading room on one side, and on the other, a more extravert terrace with wonderful views of the city – the (literal) high point of the visitor’s journey through the building. 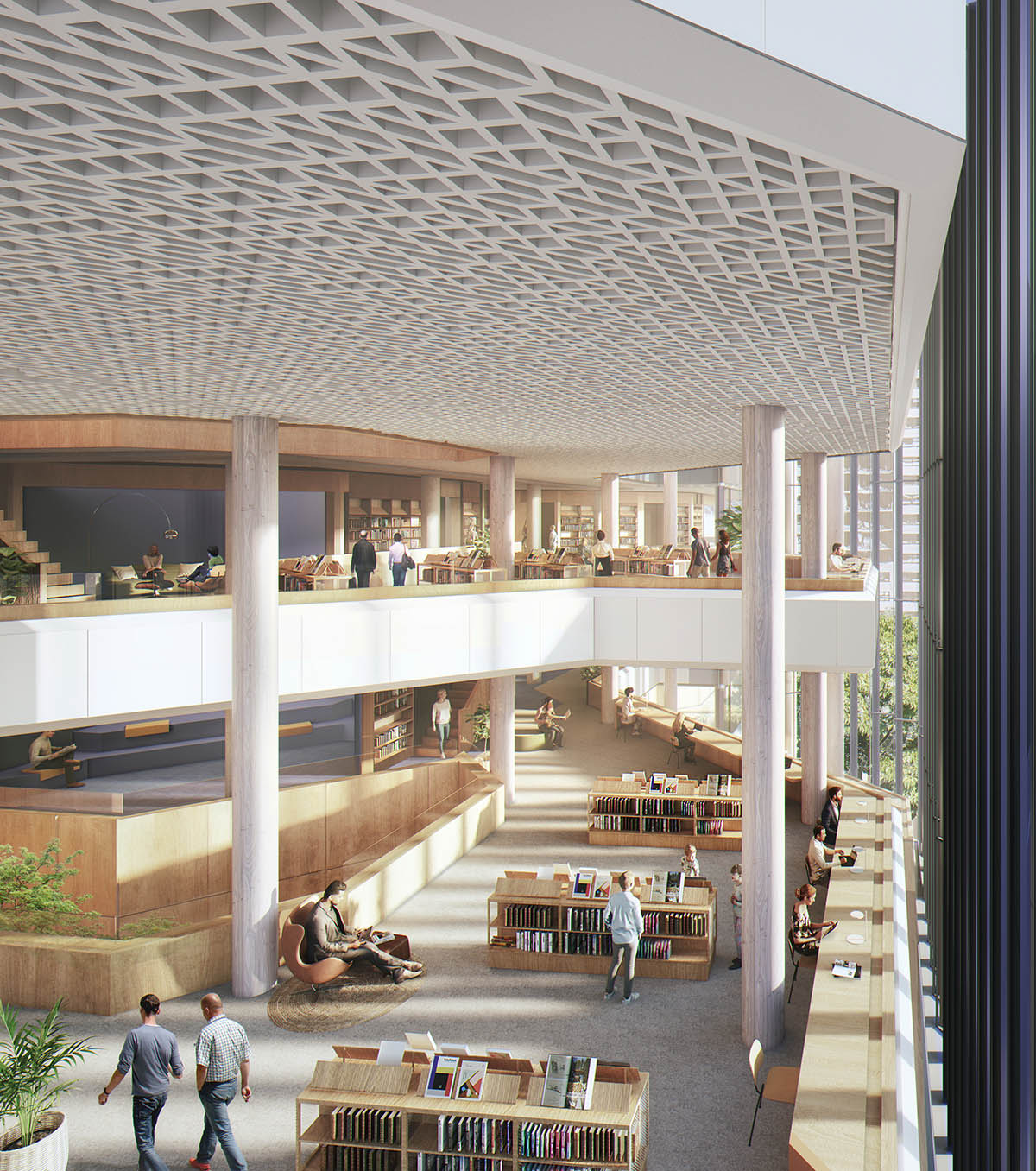 "Removing technical areas from the top floor makes it accessible for visitors. It can then become an urban oasis and offers totally new qualities to the library with panoramic views over the city – a real gift to Rotterdam," said Svein Lund, Lundhagem. 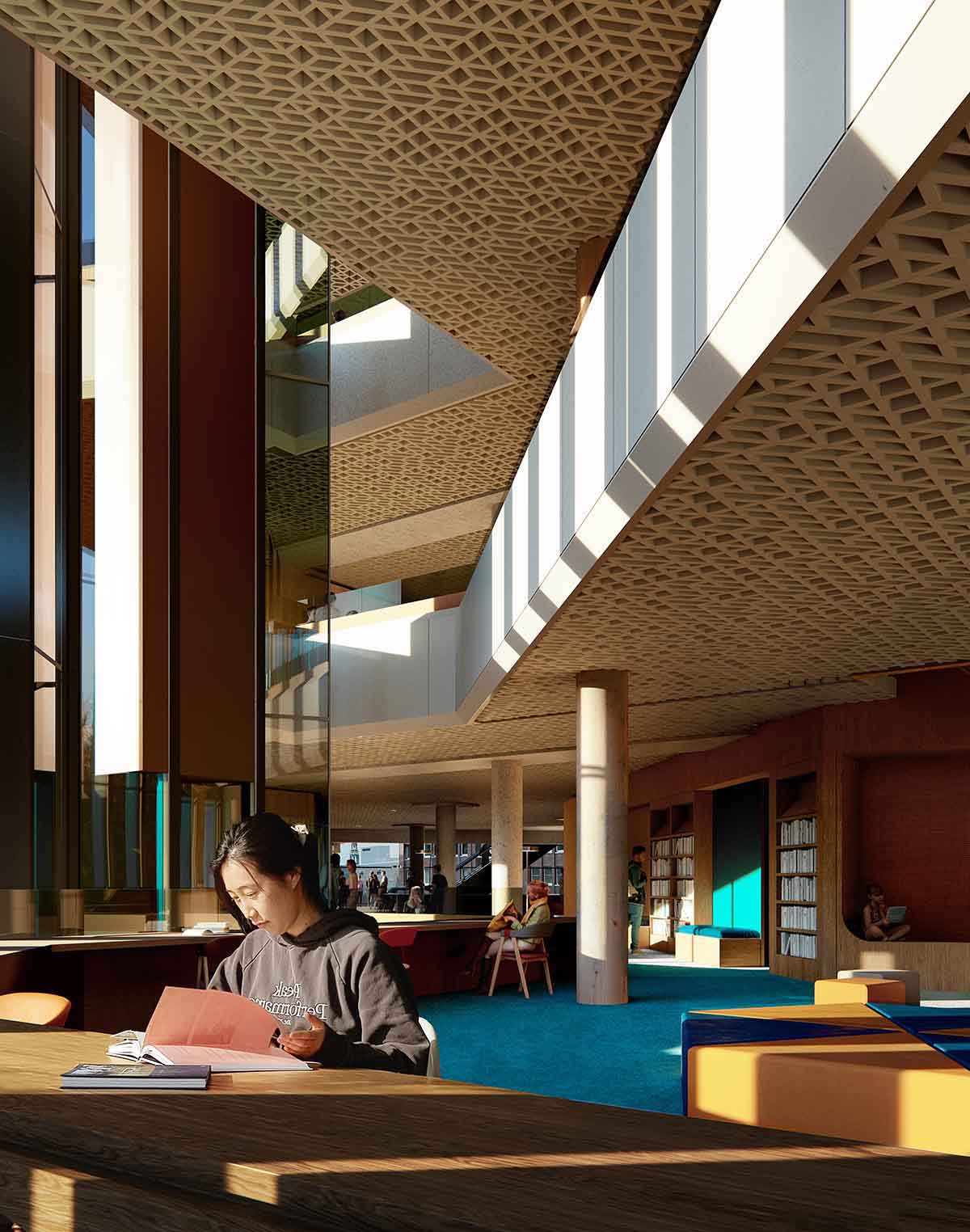 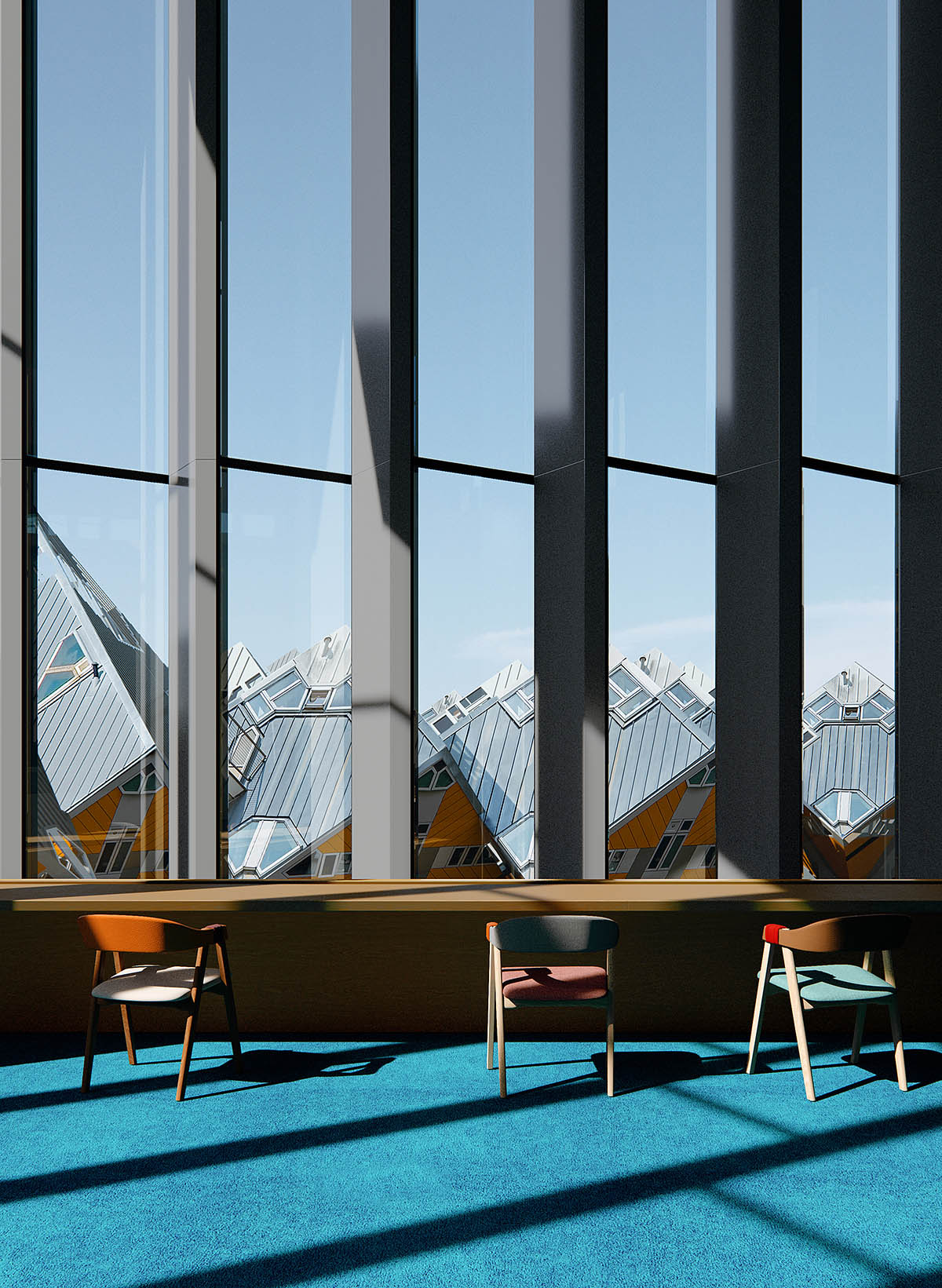 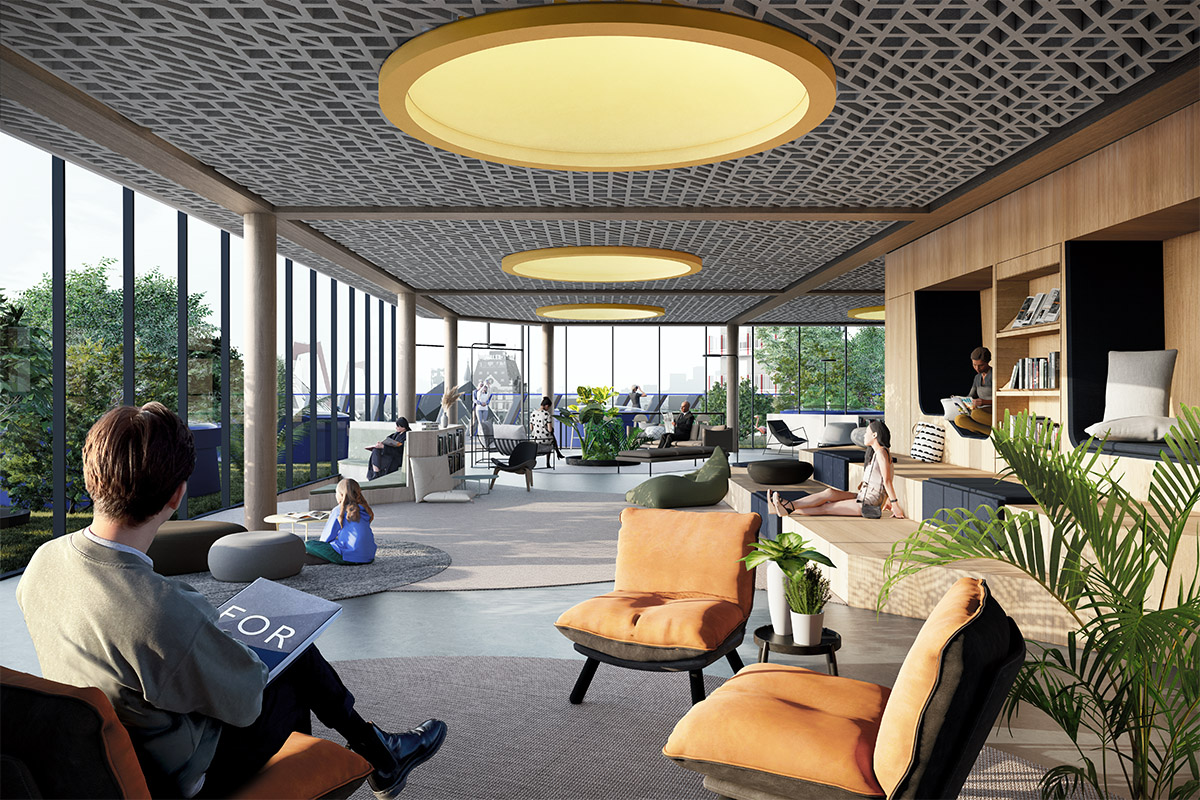 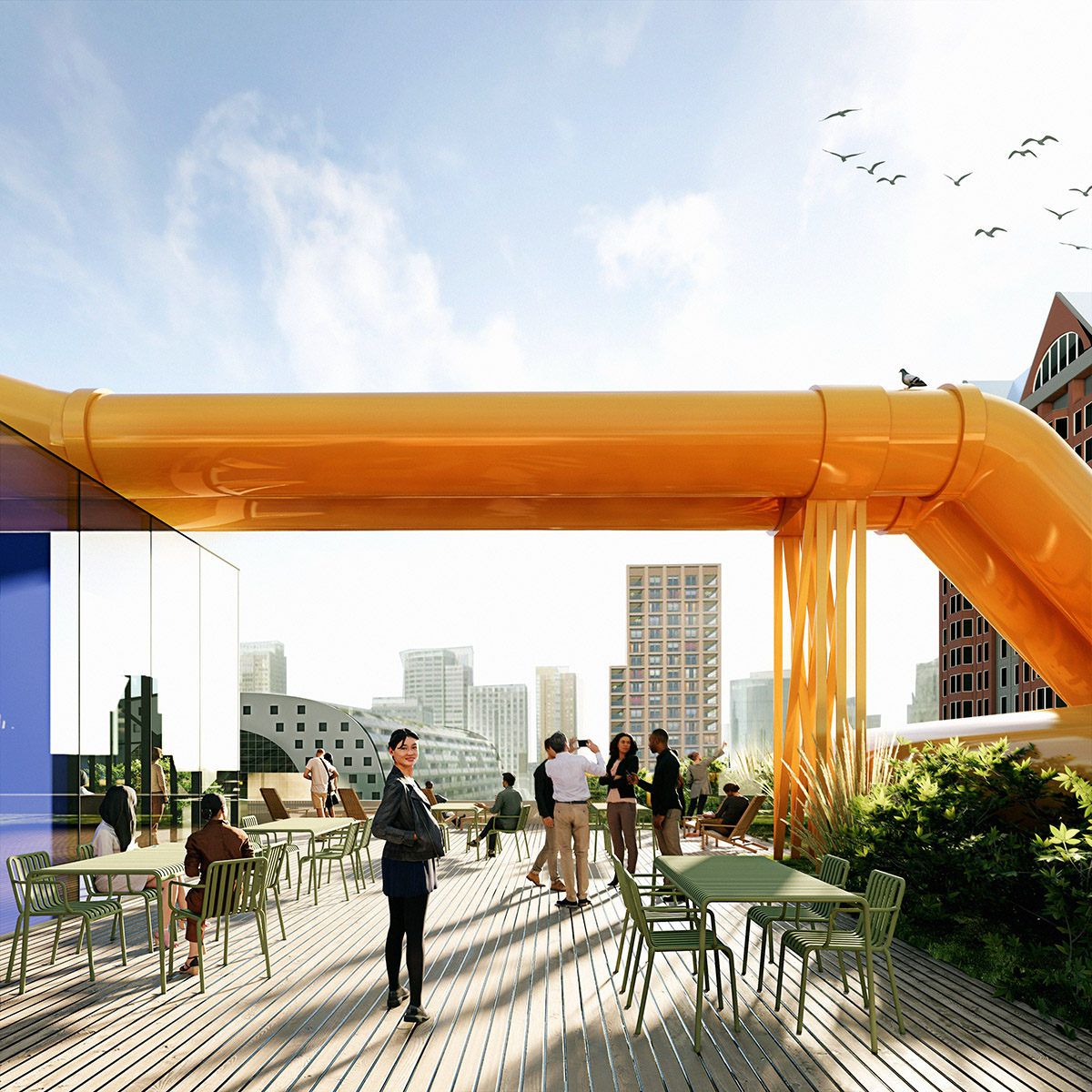 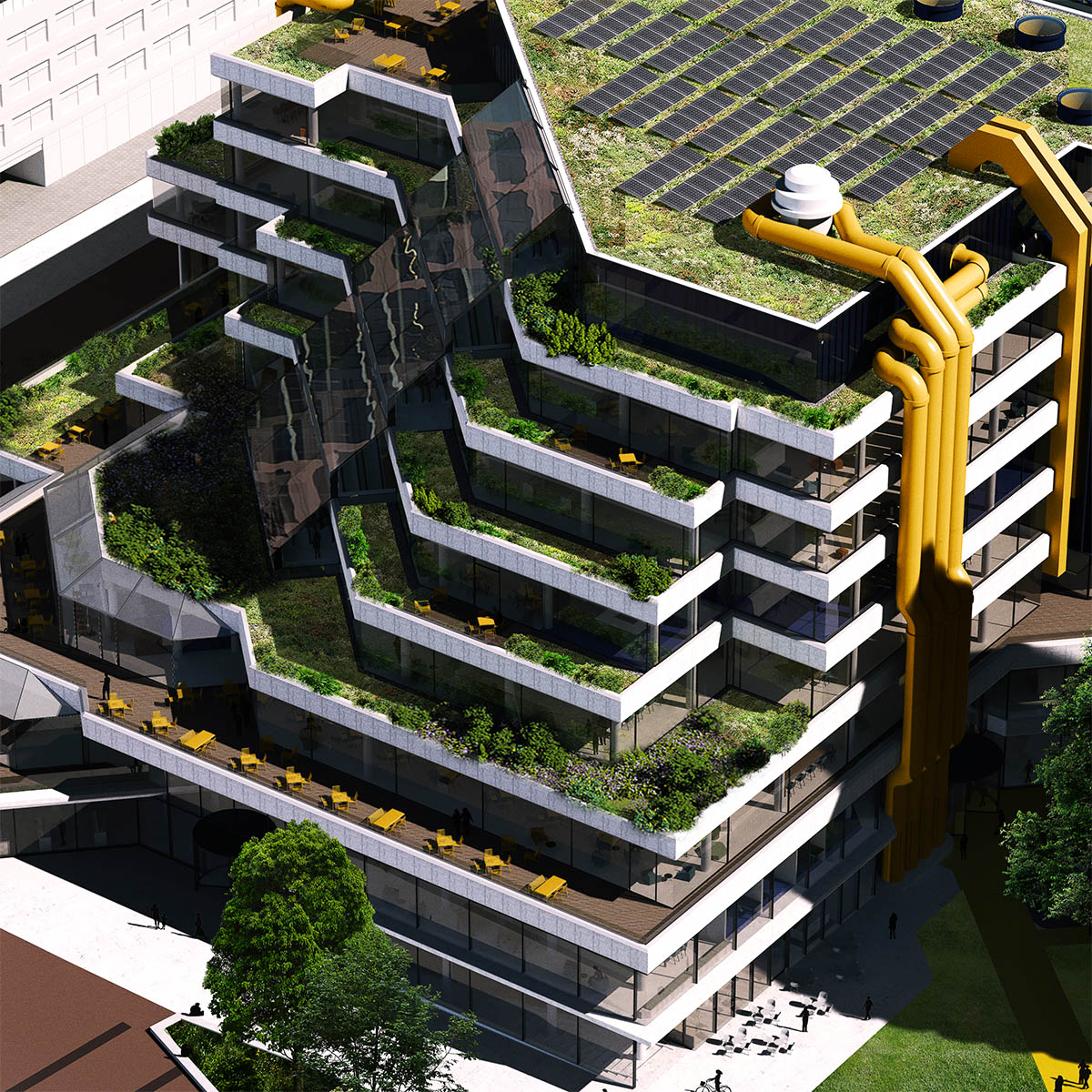 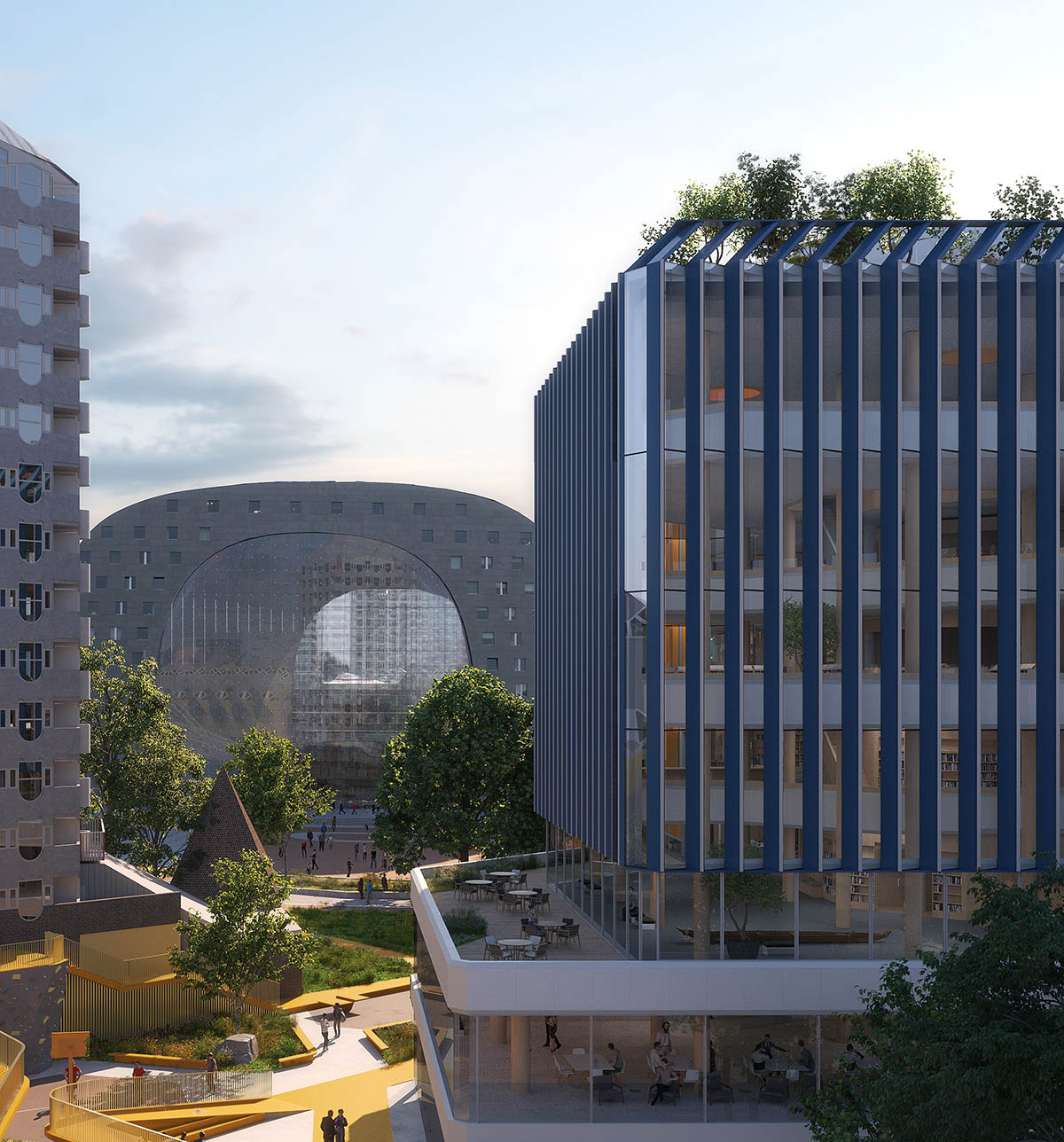 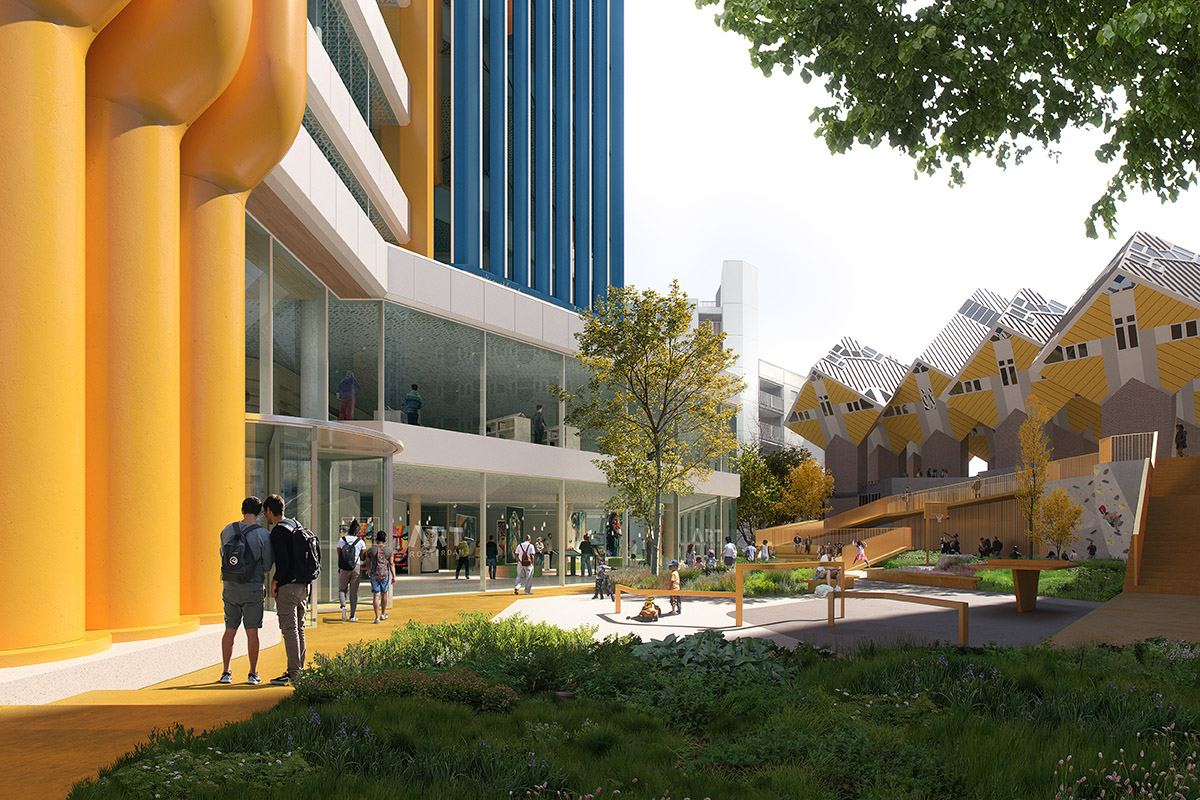 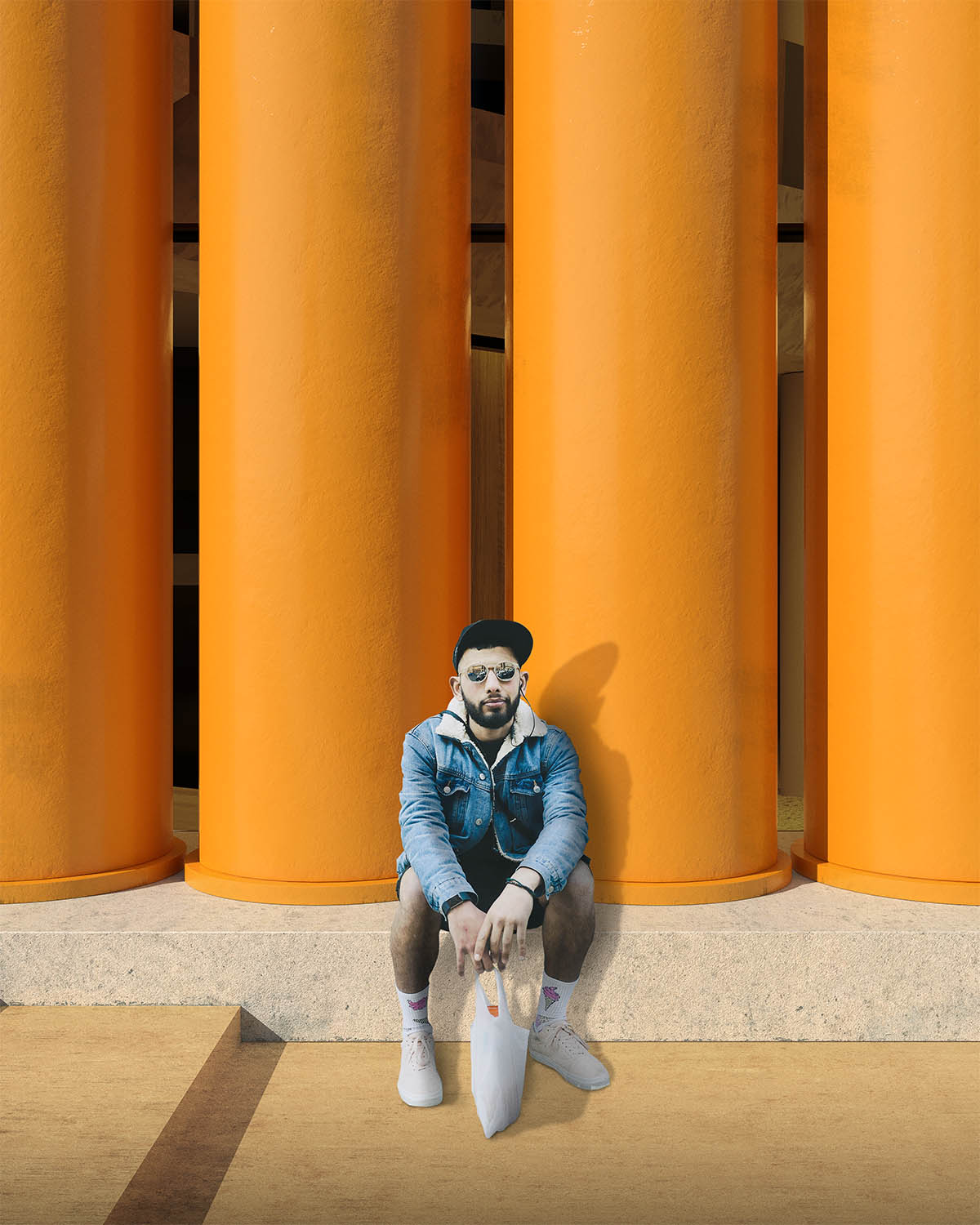 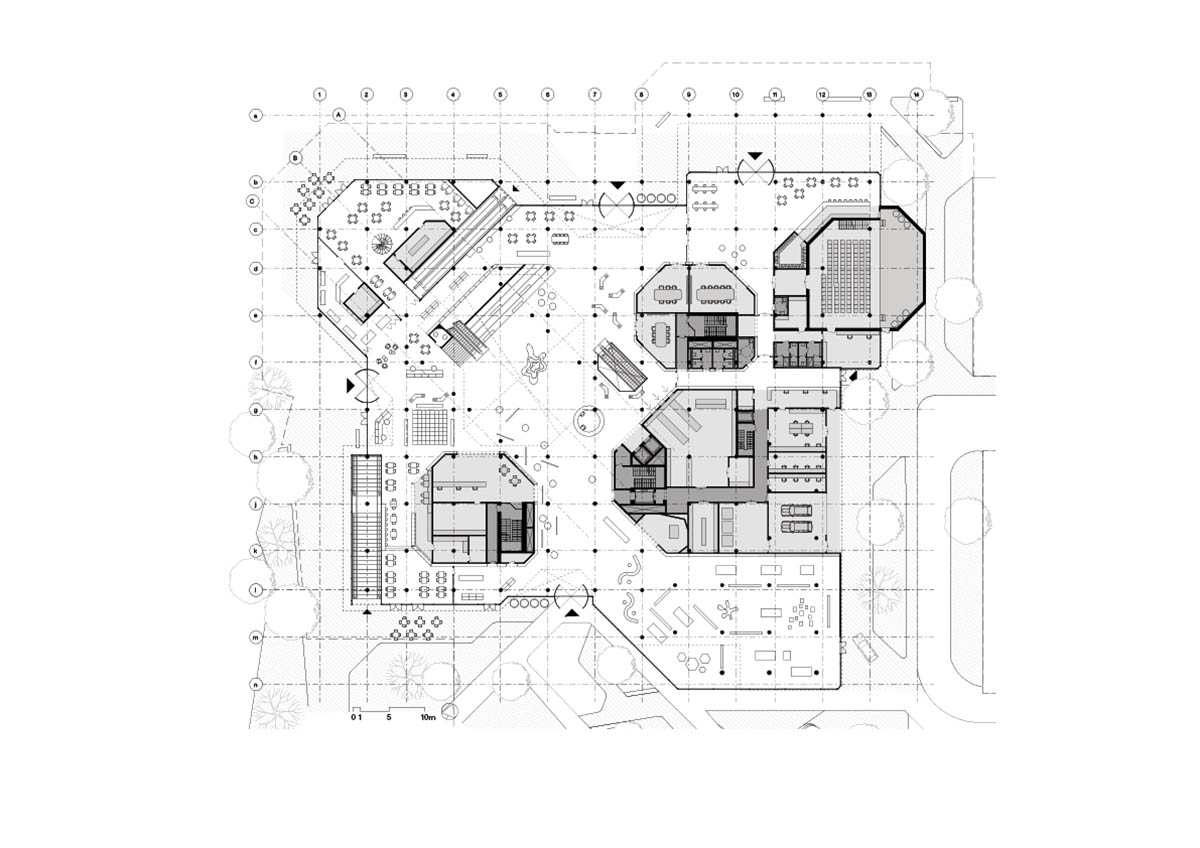 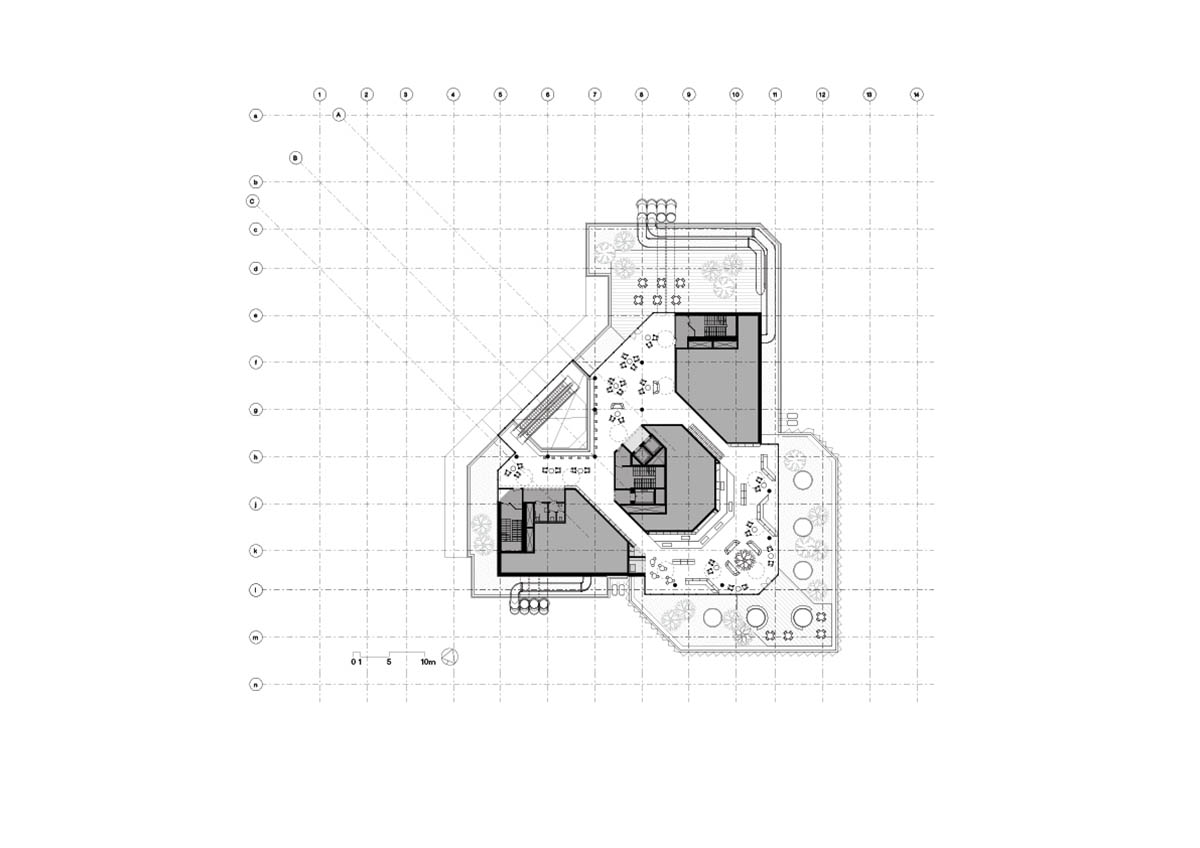 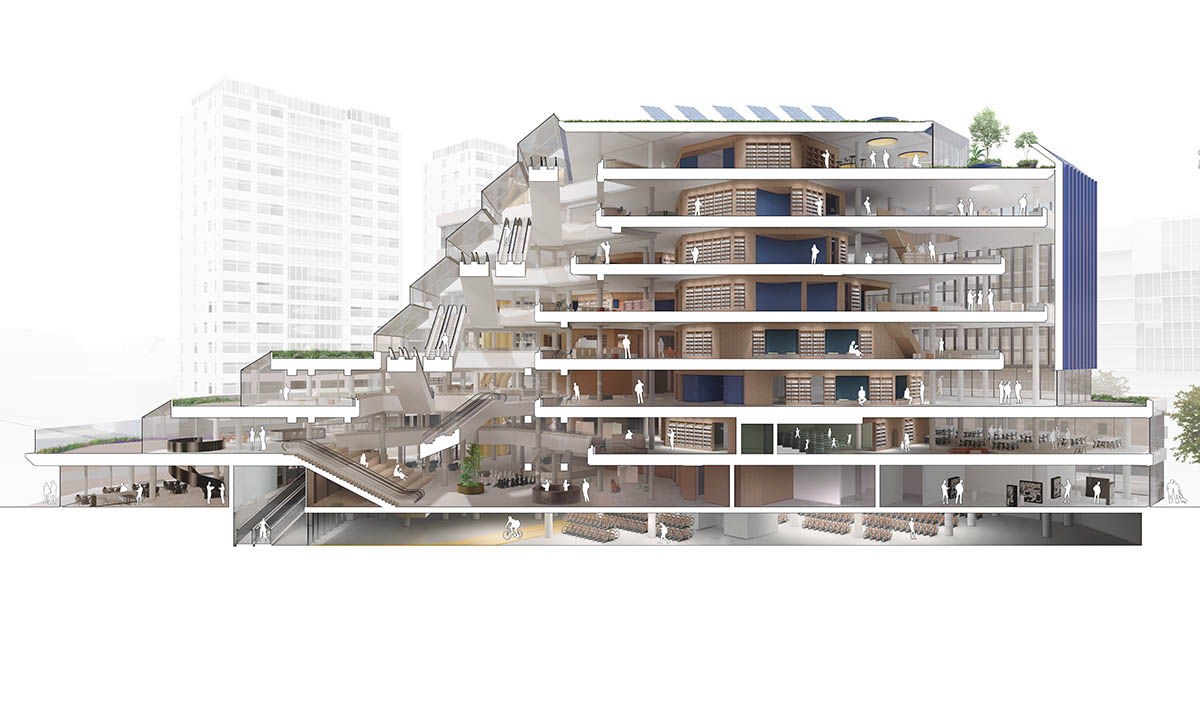 Powerhouse Company is currently working on the new IBM Headquarters in Amsterdam and a new mixed-use building in Amsterdam. The firm is also designing a university building for Tilburg University on the campus in the Netherlands.

Powerhouse Company is an award-winning architecture office based in Rotterdam, the Netherlands. The firm was founded by Nanne de Ru in 2005. The firm has offices in Rotterdam, Beijing, Oslo and Munich.