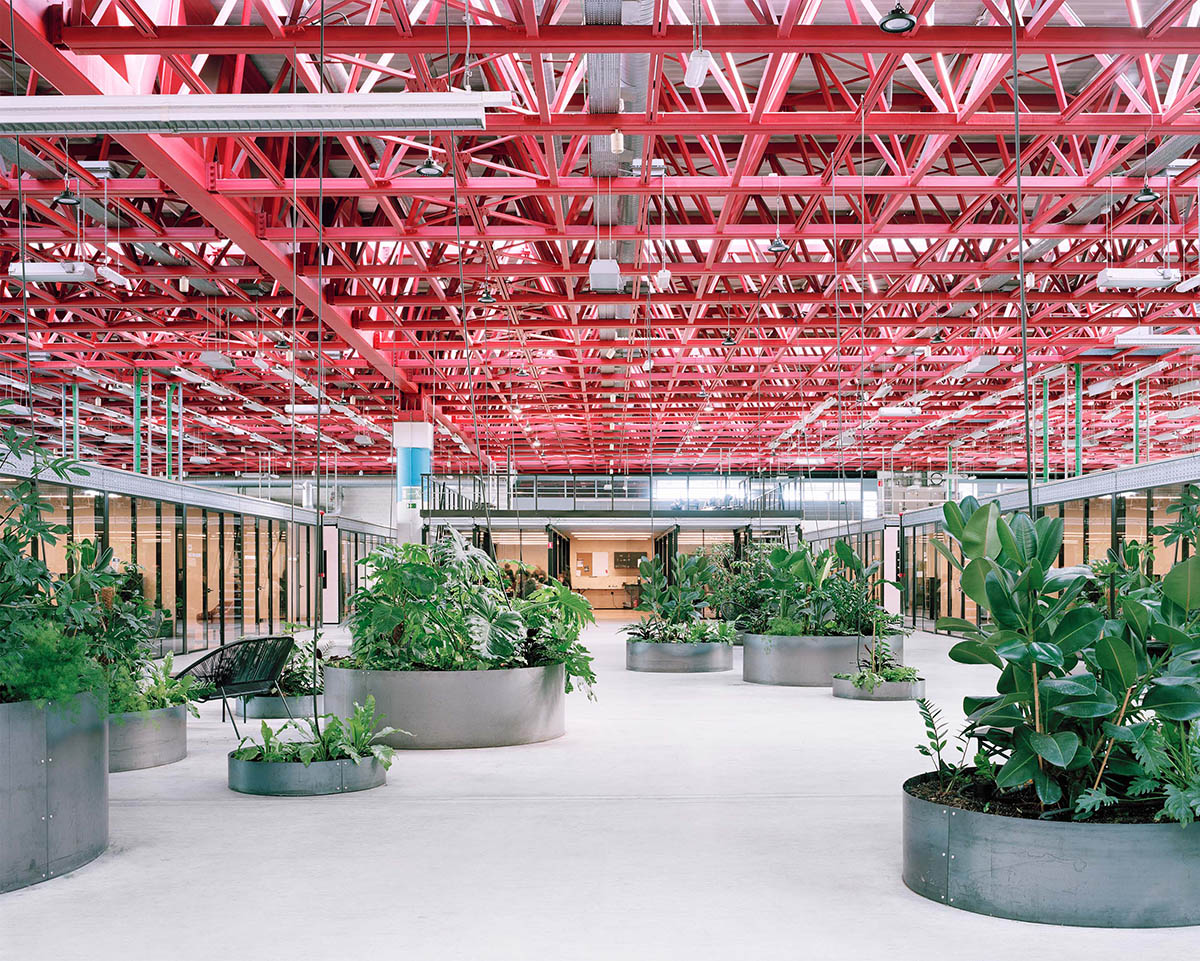 Belgian architecture practice Traumnovelle has converted an industrial building into a new workspace in Charleroi, Belgium by adding a pinkish-colored steel structural framework on the ceiling and circular planters at the heart of the space.

The space is situated inside an unoccupied industrial building close to Charleroi train station in Belgium. 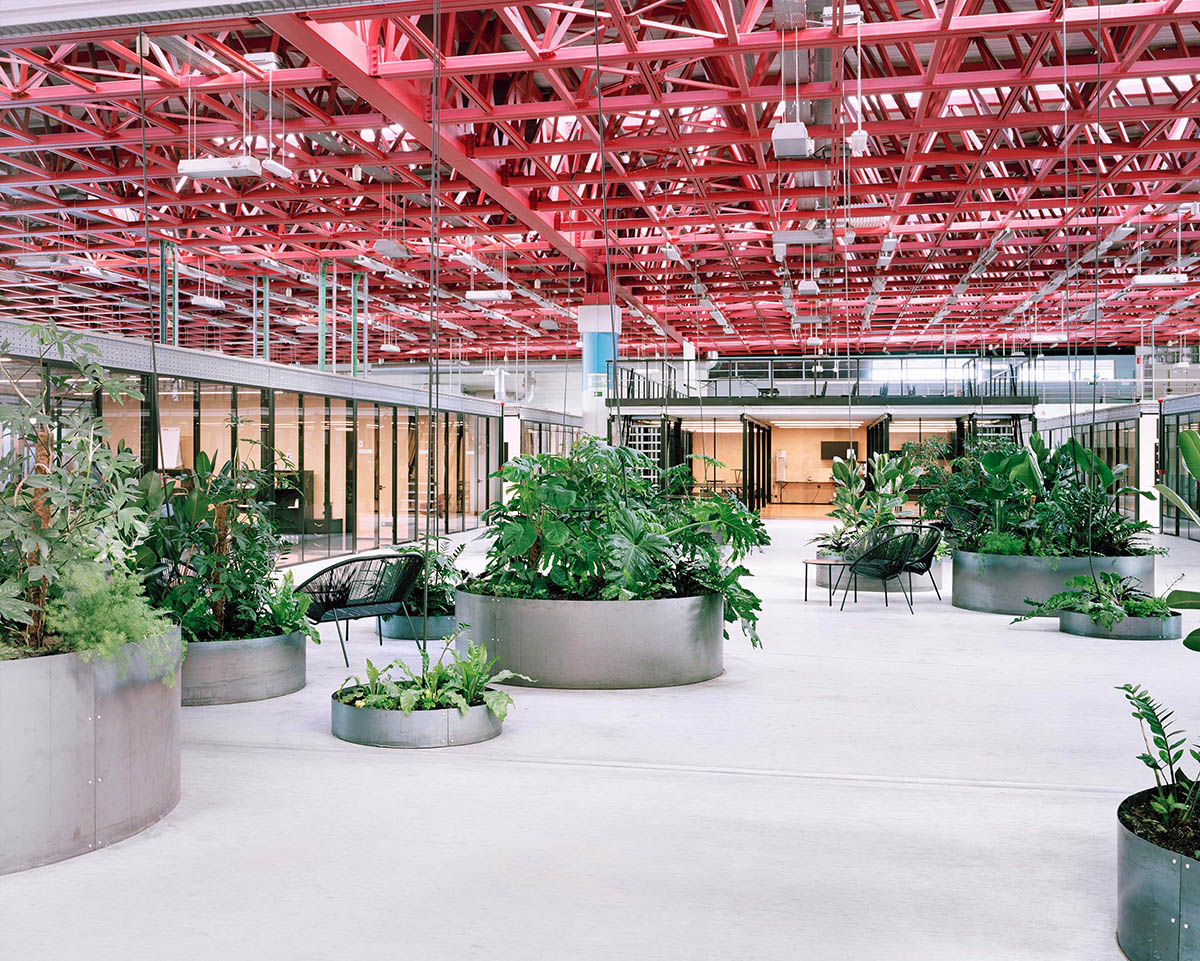 The studio created a layout based on a city grid to design autonomous work spaces that frame a central public space dedicated to the communal activities of this industrial ecosystem.

"In the context of a post-industrial city faced with employment deficit, the conversion of the spaces of this golden age is as slow as that of historic know-hows," said Traumnovelle.

"The Advanced Engineering Centre acts as a laboratory to experiment the new forms of work of the 21st century, faced with the transformation of the labour market," the office added. 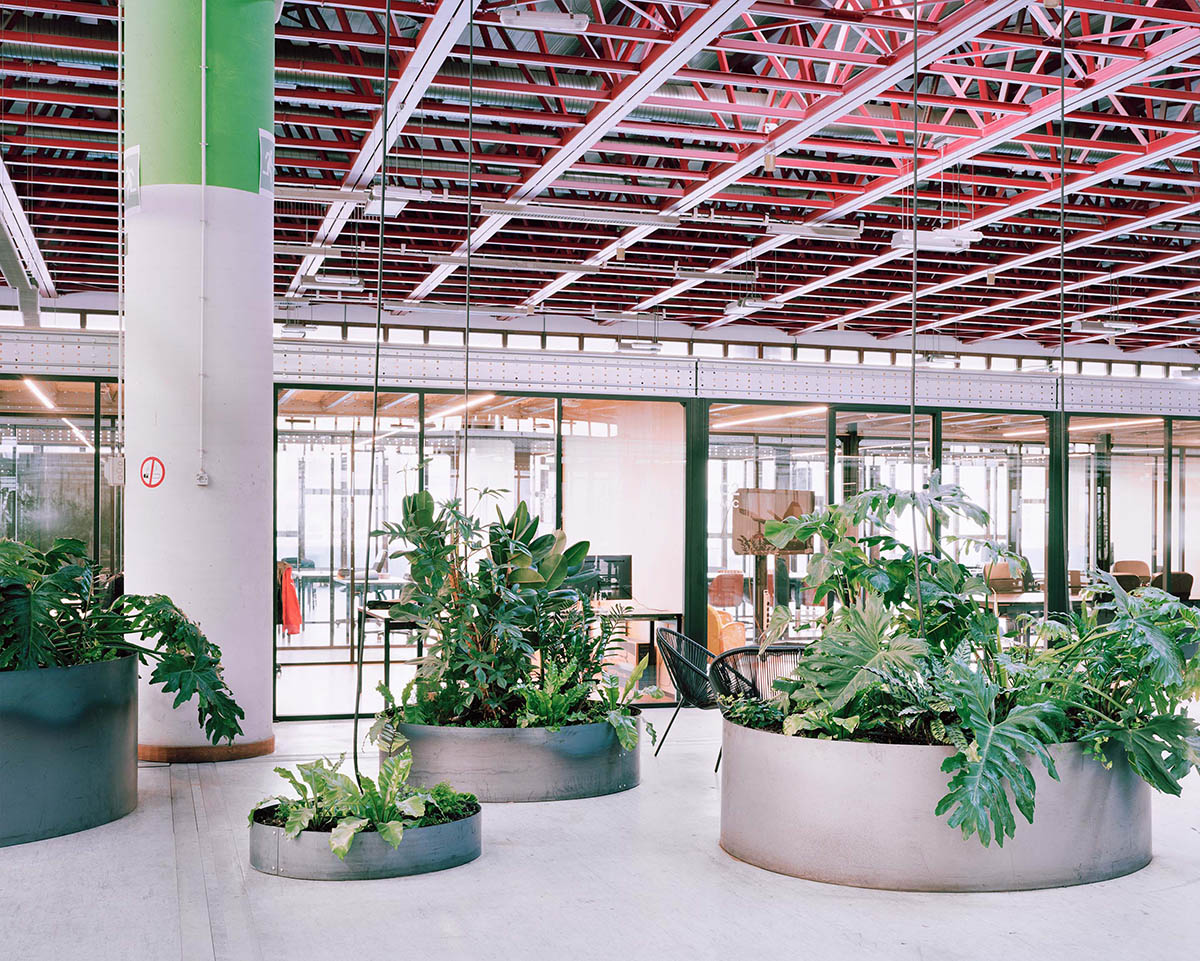 In design process, the studio takes cues from urban grid. According to the studio, "city grids can be considered to testify to a culture’s cosmogonia."

"As such, the urban grid of the post-industrial workspace is that of high individual liberty—in the form of creativity, innovation and entrepreneurial freedom—confronted with a strong regulatory framework inherited from salaried employment, which implies the control of individuals and optimisation of productivity." 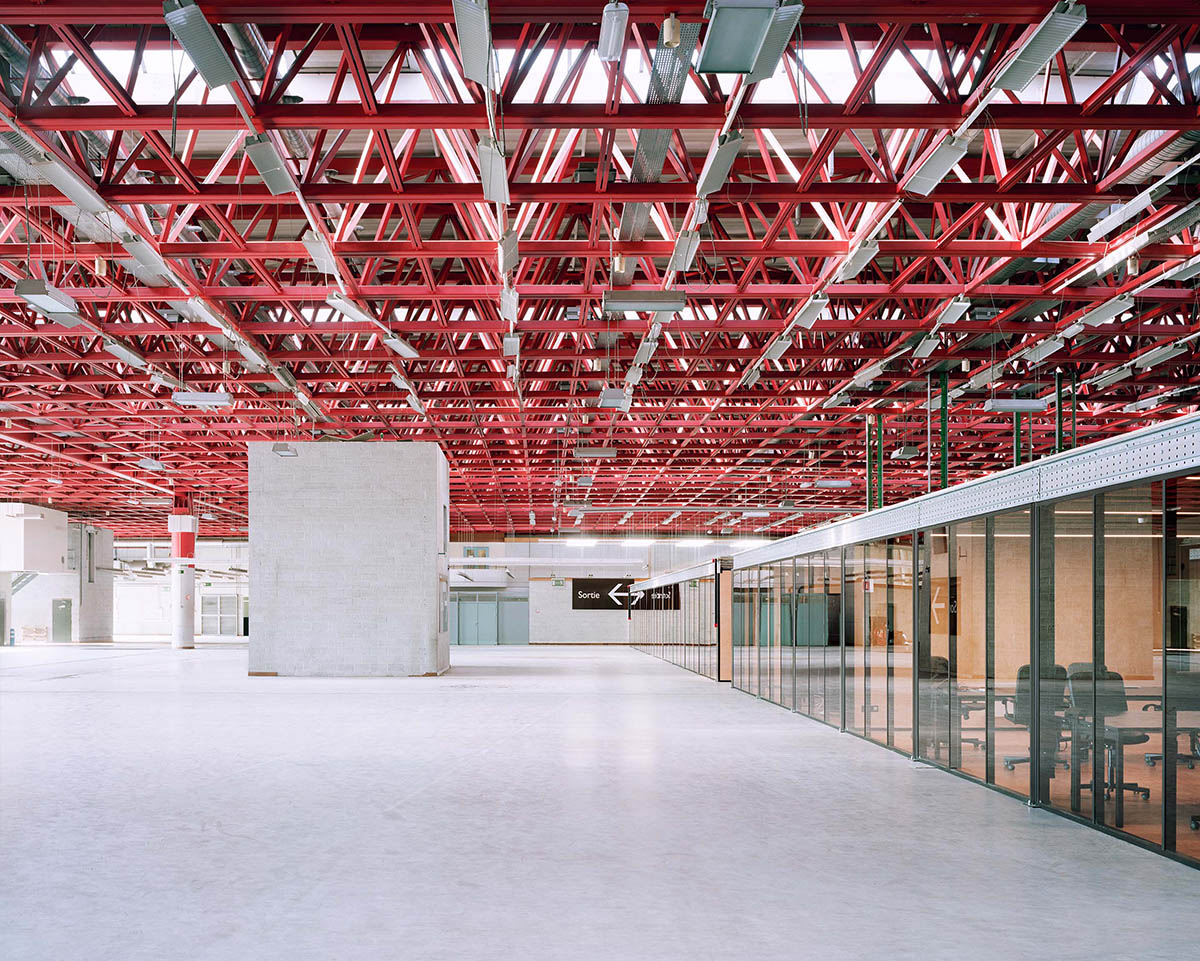 In the general layout, the working spaces are designed as modular, glazed volumes and assigned to different functions, like meeting rooms or communal activities.

The studio references to the Roman training camp, organised according to two perpendicular axes symbolising order and the submission of the worker to the city’s logic. 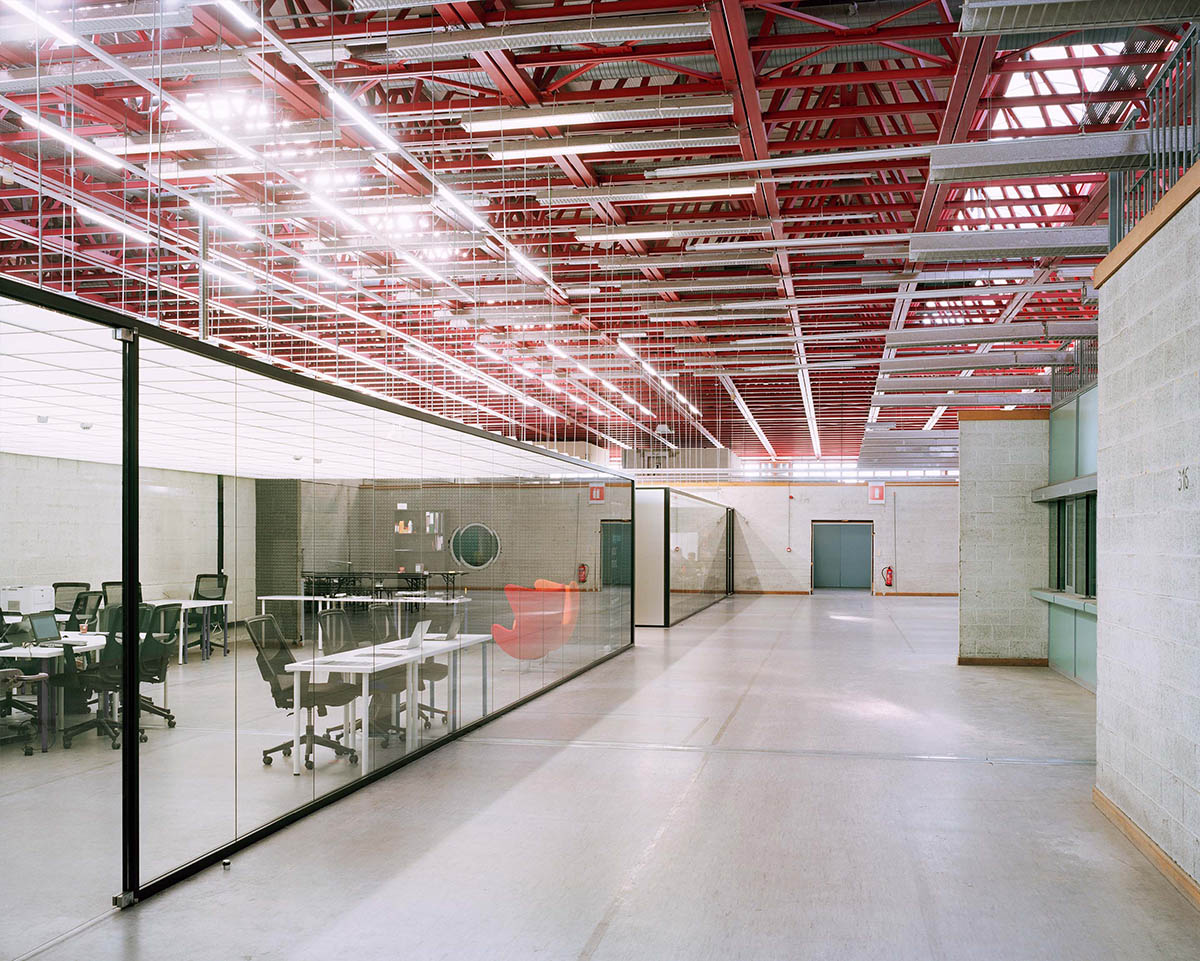 The central shared spaces, emphasized by a colored-steel framework, allow the workers to come together through federative collective activities, similarly to the exercise ground. 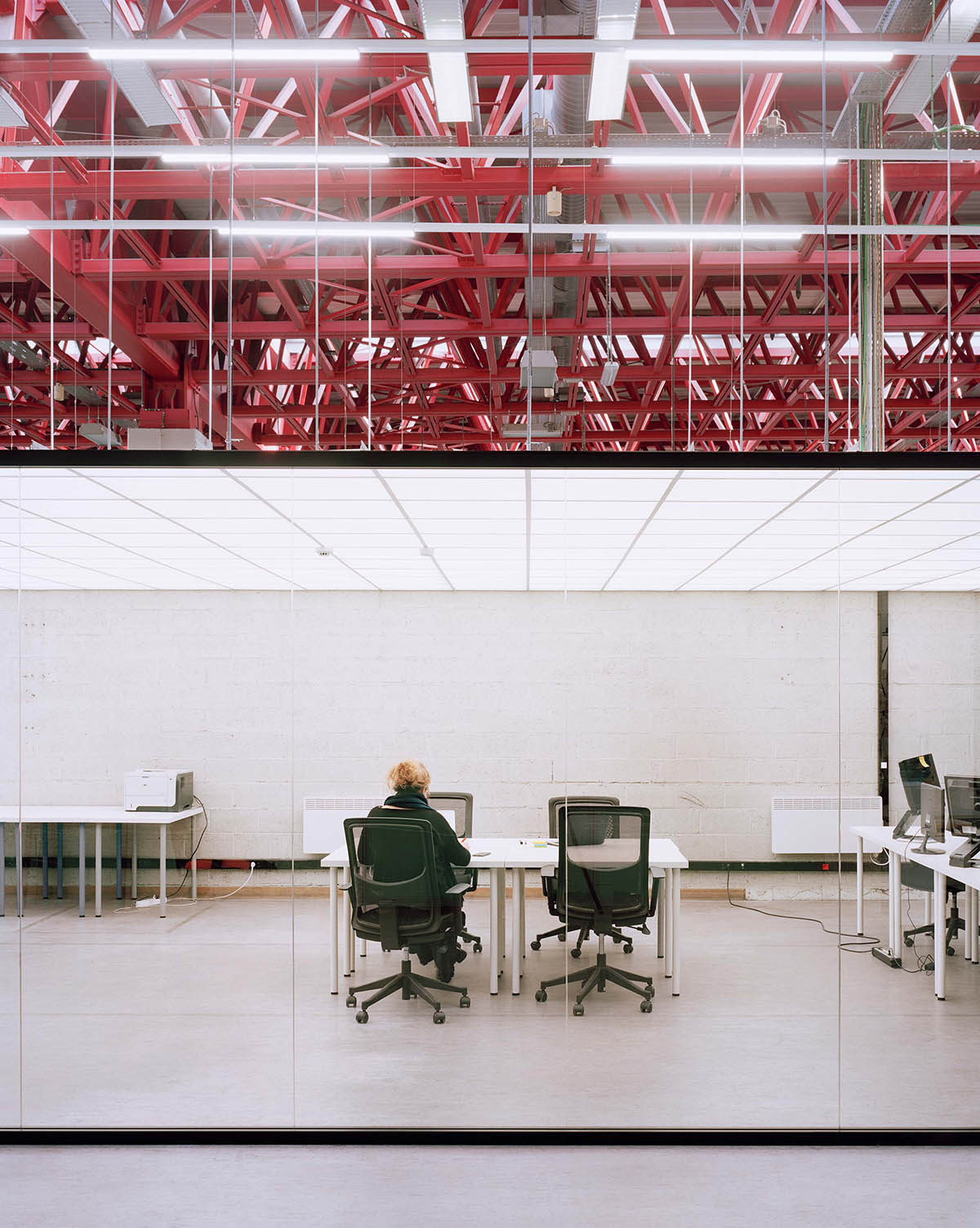 "The parallel strips of glazed office spaces highlight the contradiction between workers’ autonomy and their visibility," added the office.

"The expectation of visibility of the workers practicing their tasks, from a theoretical central viewpoint, is challenged by an overlay of transparencies and reflections."

"Their overlapping offers workers a respite from observation by blurring observation."

On the other hand, the studio creates a striking contrast in material approach. While glazed volumes provides a high degree of visibility, the dominancy of steel structure on the ceiling tries to make the building playful and relaxing. 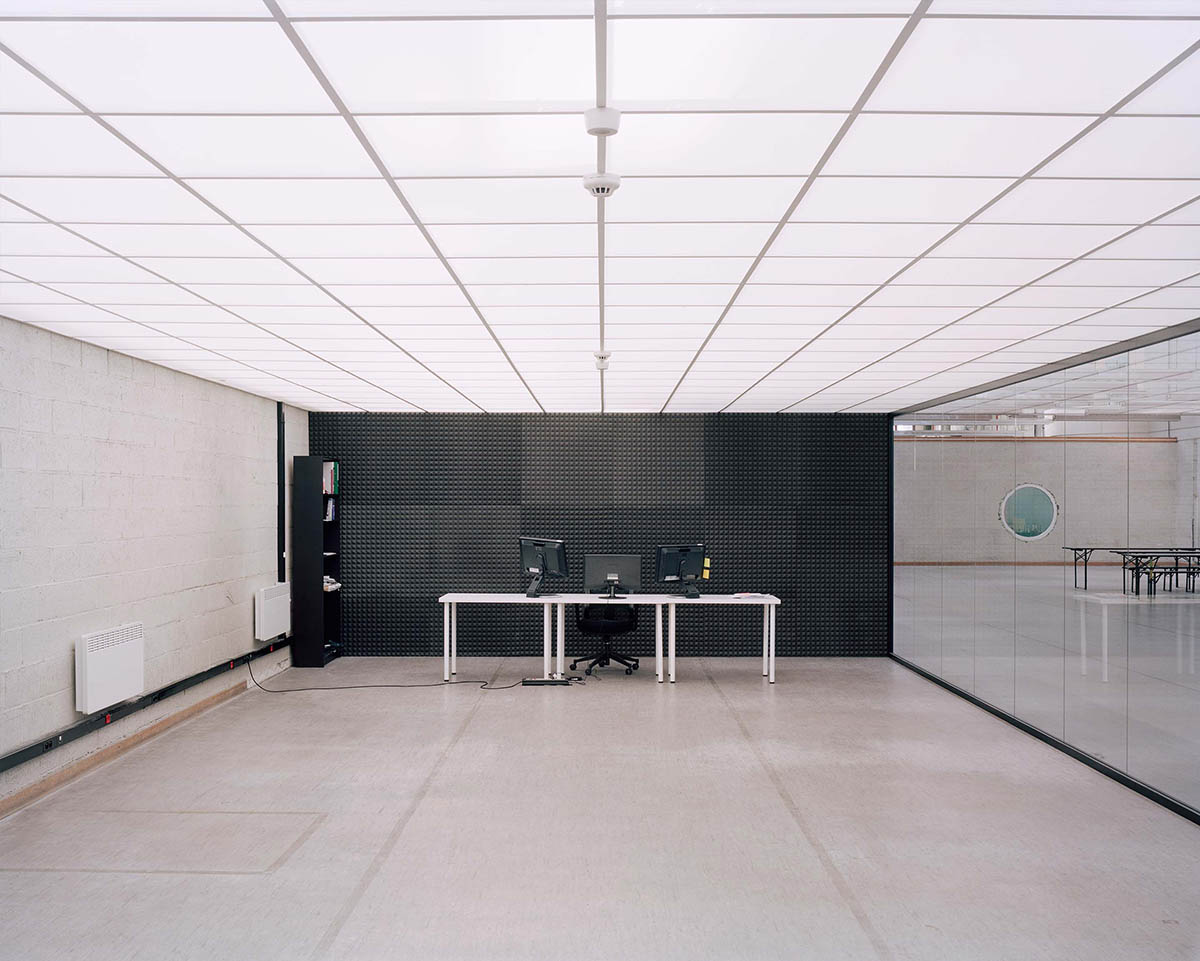 In the project, the studio's intention is to devise a clear logic on its circulation system, aiming at making the existing spatial structures and uses more legible.

Work spaces can accommodate for 8 to 12 people and outline communal amenities such as various meeting spaces, as well as community and leisure spaces in the centre of the industrial slab.

A functional area comprises a lobby, educational spaces and a prototyping lab and also connects the new offices to the existing circulation nodes. 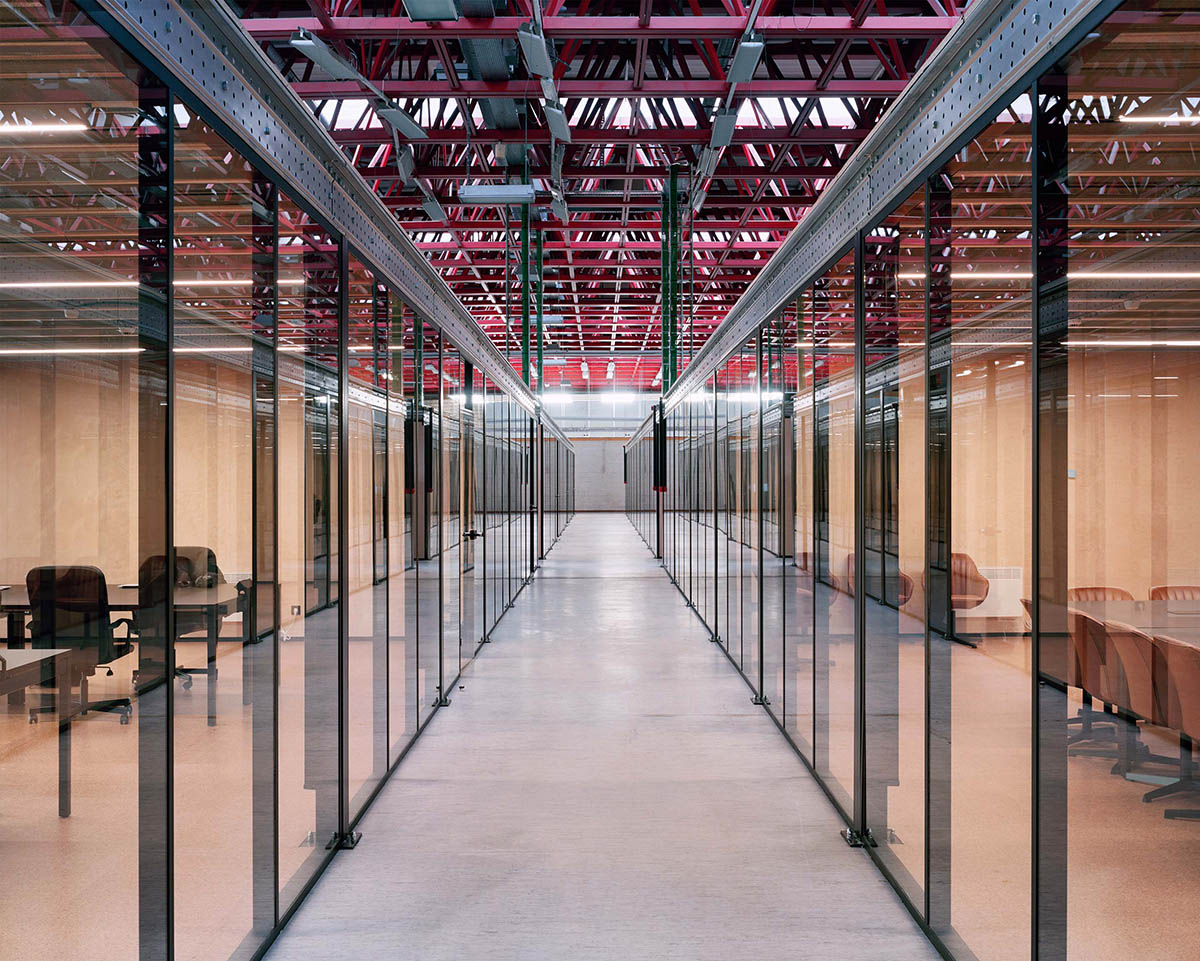 "The Advanced Engineering Centre fosters a sense of the collective and collaboration between workers, as well as optimal work and research conditions," added the studio.

The central space, becoming the heart of the building, features an indoor tropical garden and offers a different kind of community and leisure space. This spaces encourages new forms of work and collaboration, as the studio explained.

"It generates sub-spaces which can be appropriated by users for lunch, a meeting, a game or a phone call," the office continued.

"Thus spaces for unproductive activities take up a central position in the overall layout of the workspace."

Even if unproductive, these spaces are expected to increase motivation, team engagement and creativity. 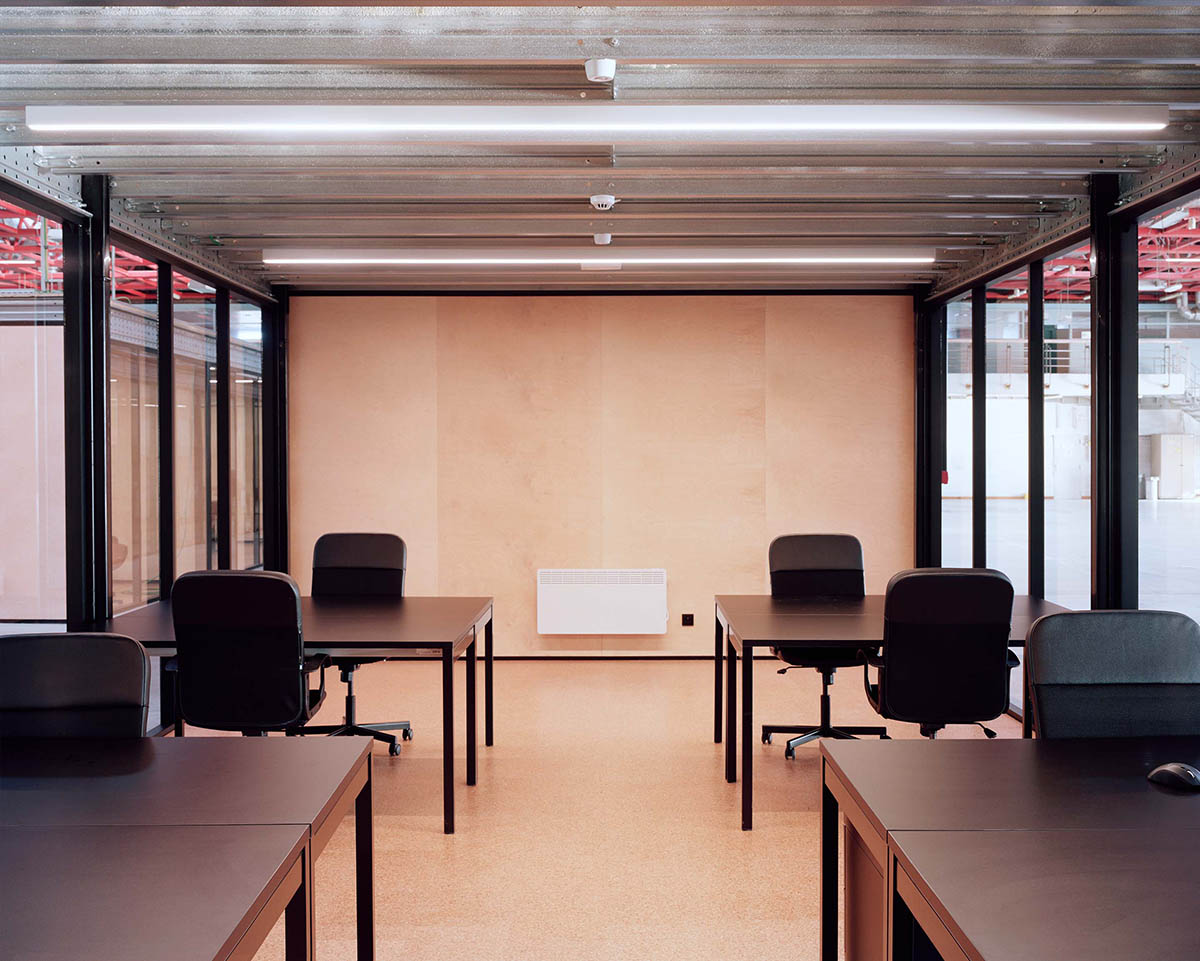 The interiors offer flexible and comfortable work spaces that can be arranged according to each occupant’s expectations and future demands.

The studio added that "A6K explores ways of generating opportunities for collaborations through shared programmes such as leisure areas, a cafeteria, a shared terrace, collective work spaces and meeting spaces as well as high-tech equipment in a prototyping lab and fab-lab." In the design and construction, the studio followed a low-impact construction technique and renovation process.

The project elements were designed entirely to be removable in case the industrial space needs to be converted or demolished.

The studio designed each element to be reusable and adaptable to the short construction phase. The project should be able to be built in a maximum of 4 months. 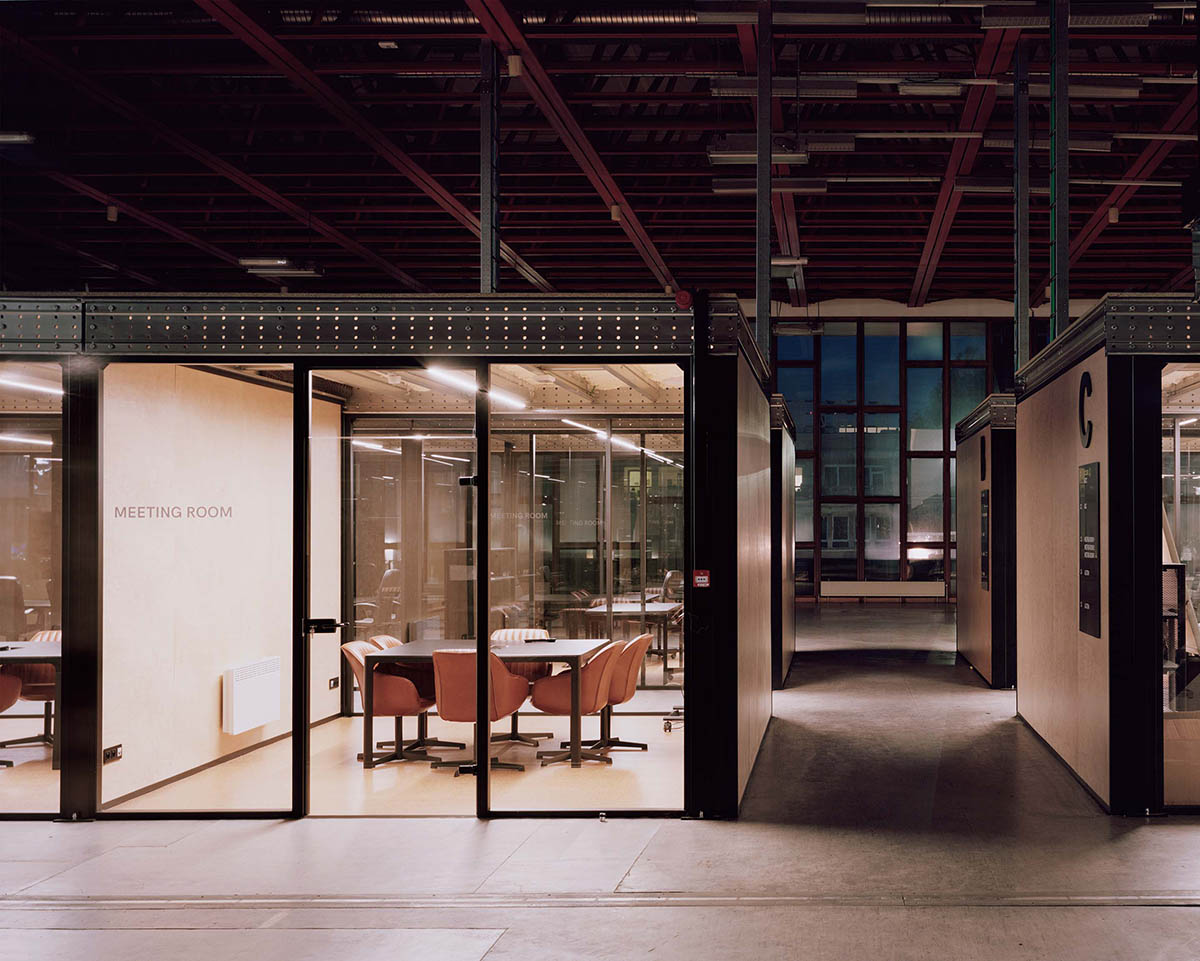 "The work modules are composed of industrial storage platforms. The facilities are autonomous and can be accessed from the roofs of the work spaces," the office added.

In the building, all partition materials can be detached and re-used elsewhere. The biosourced cork flooring system as well as the standardised glass panels can be disassembled and reaffected. 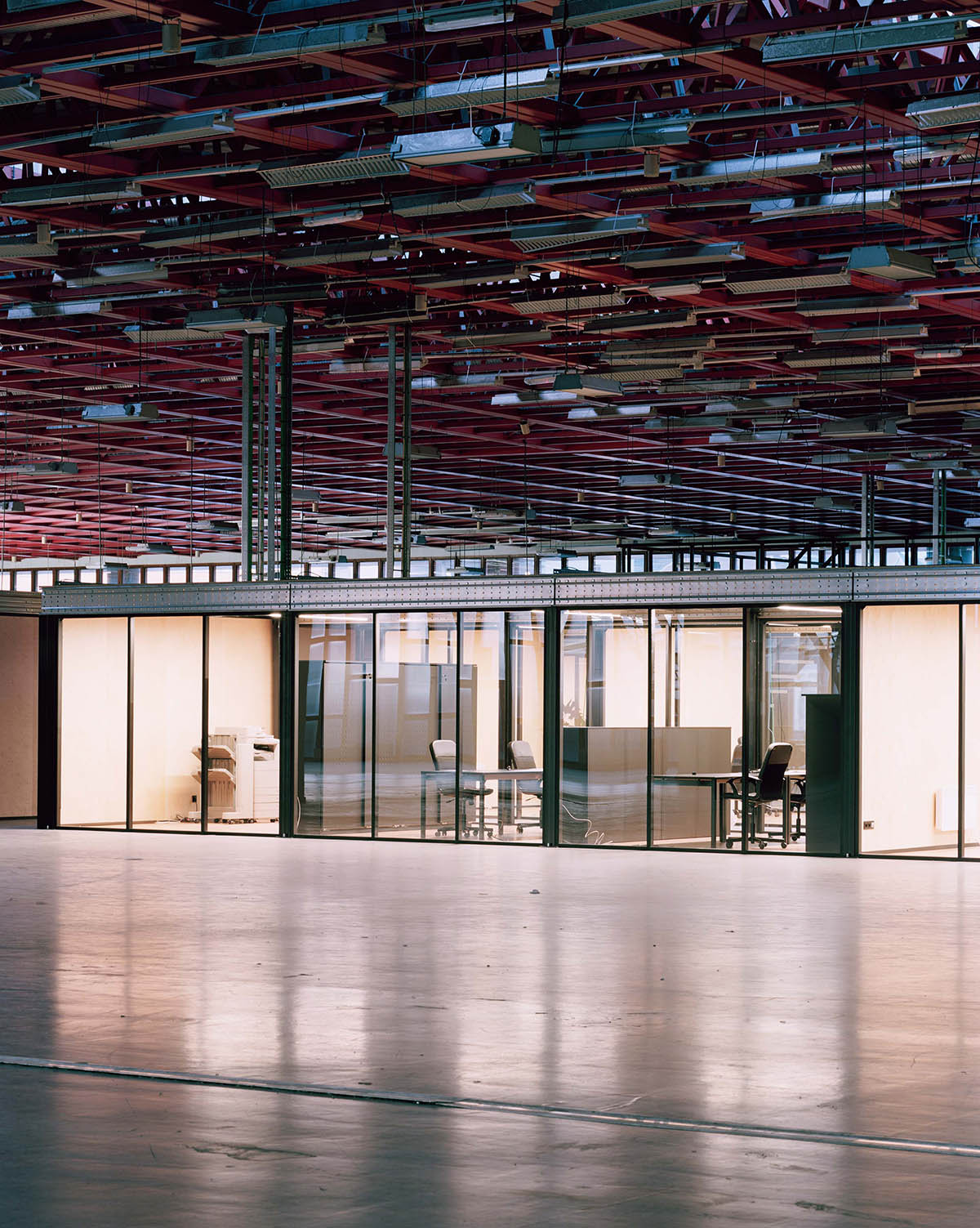 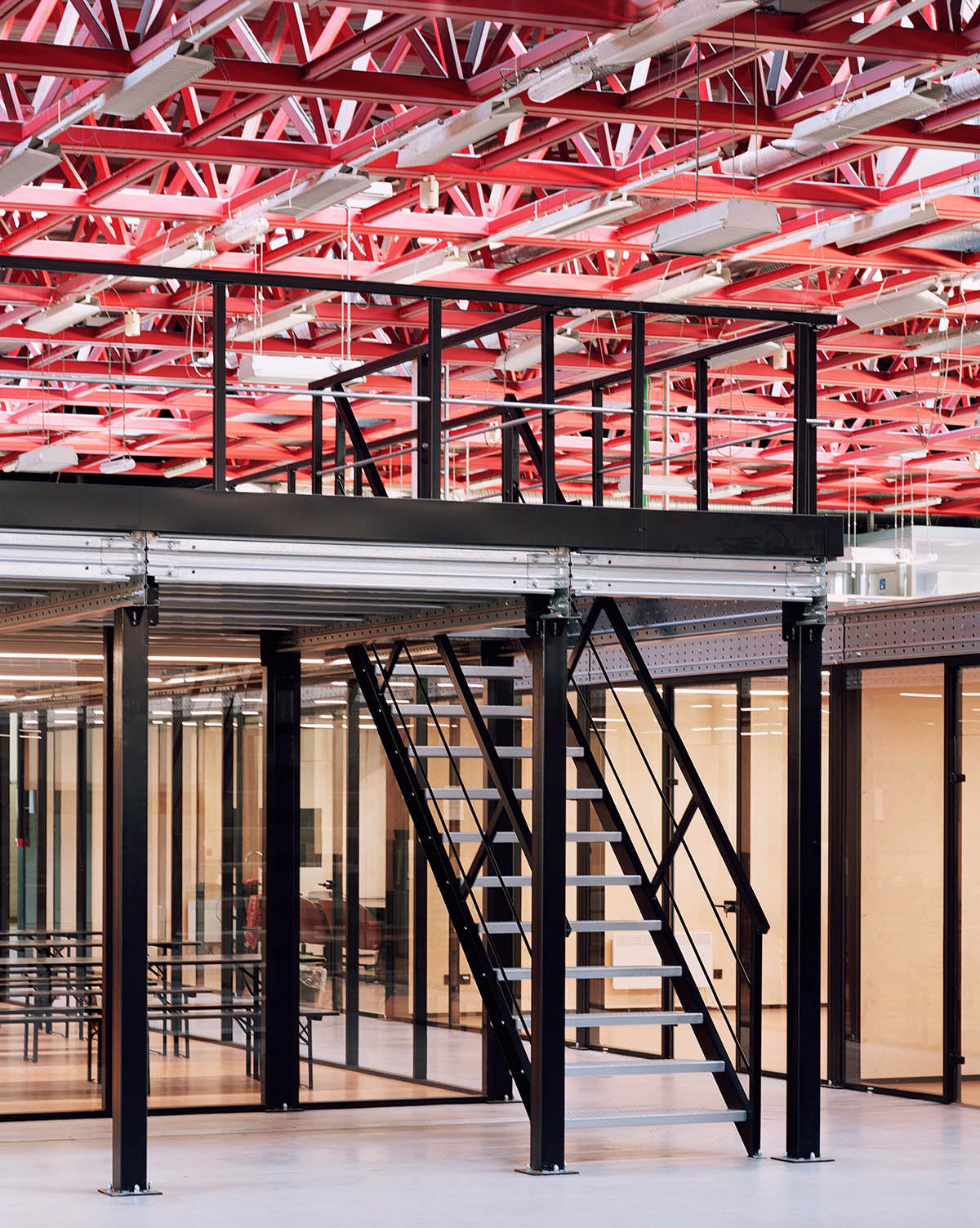 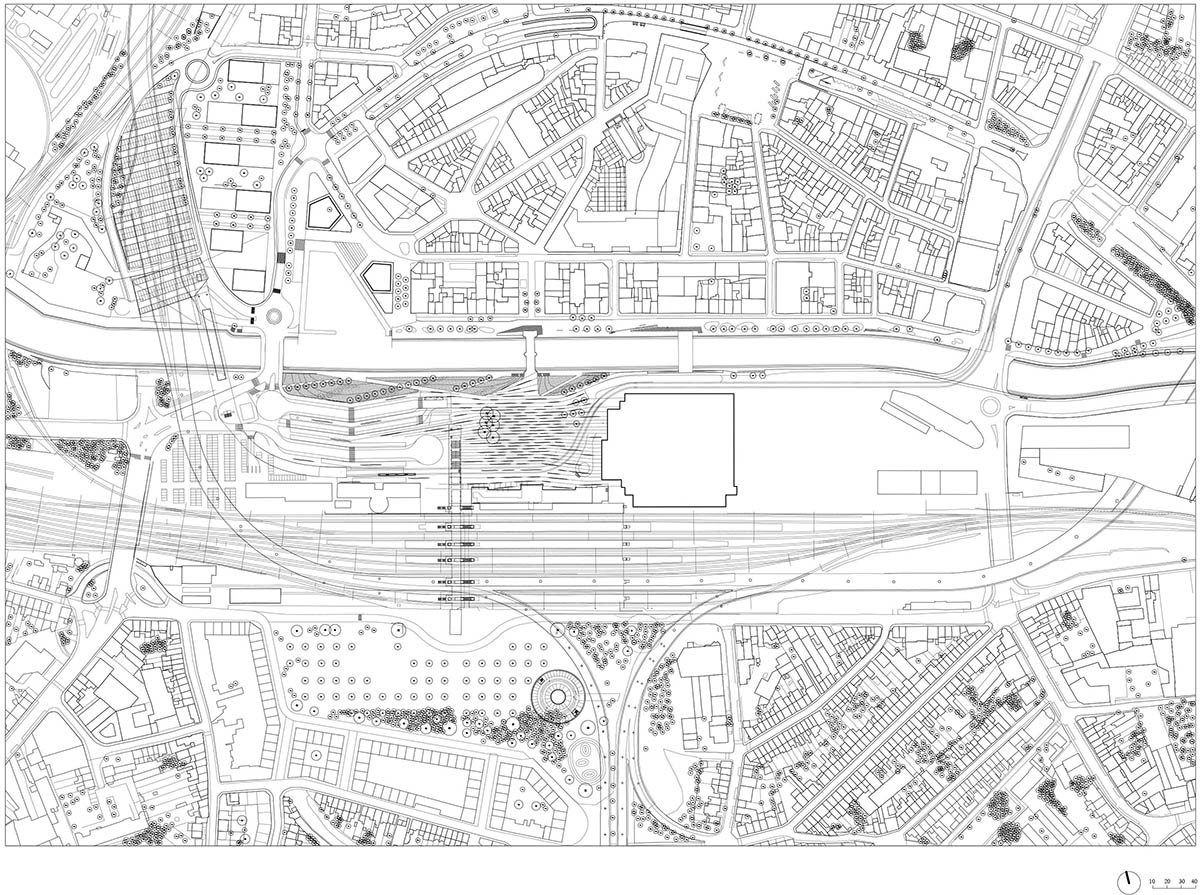 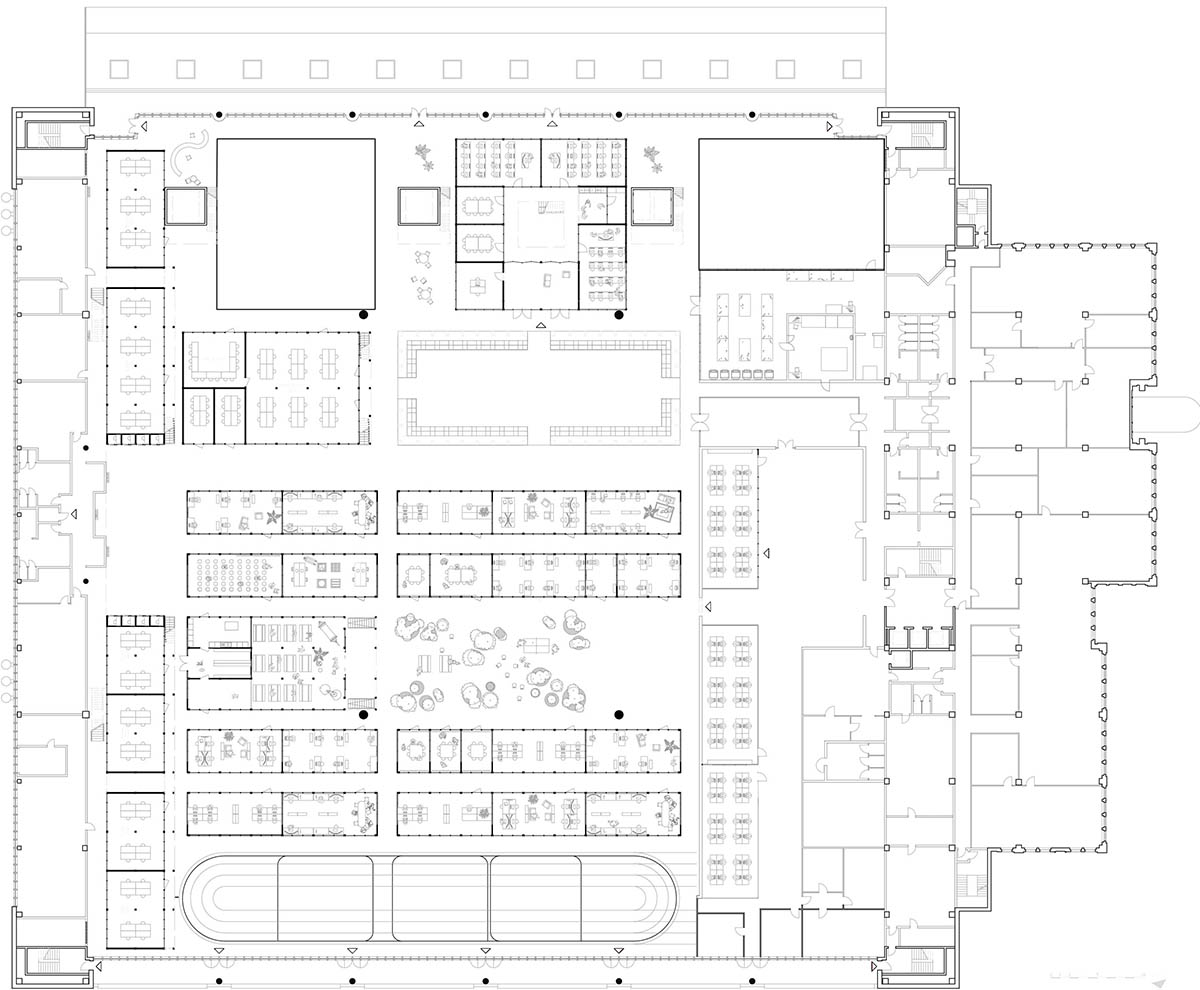 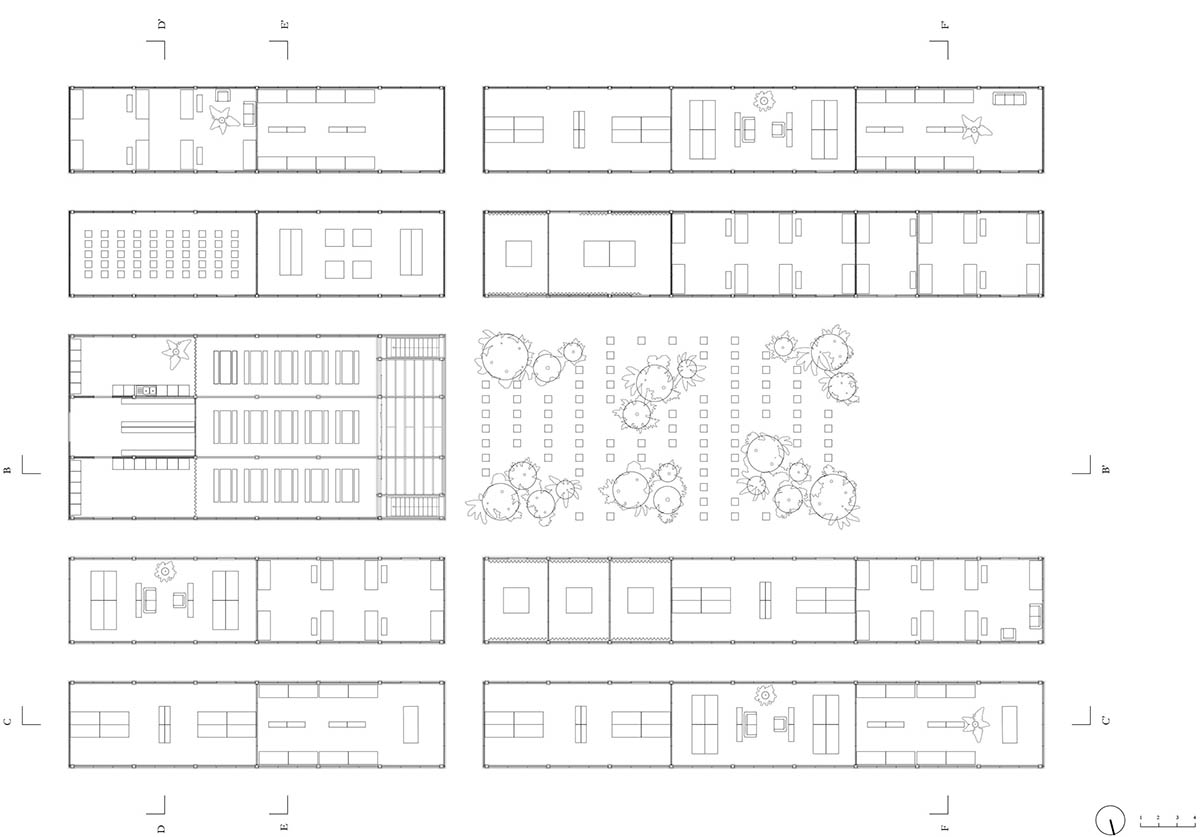 Rustic Canyon designed by Walker Workshop features light-filled and creamy interiors in Los Angeles
May 13, 2022 • 1293
World Architecture Festival and World Festival Of Interiors open for entries for Its 2022 edition
May 09, 2022 • 1103
Kengo Kuma and Associates designs commercial building covered by plants in downtown San Jose
May 09, 2022 • 1067
Morphosis' University of Texas, a new arts campus breaks ground at Dallas
May 12, 2022 • 1049
Atelier ITCH designs white brick house for live and work on a triangular site in South Korea
May 18, 2022 • 860
Field Conforming Studio installs steel sculpture with nine hollow columns in Tangshan
May 11, 2022 • 823