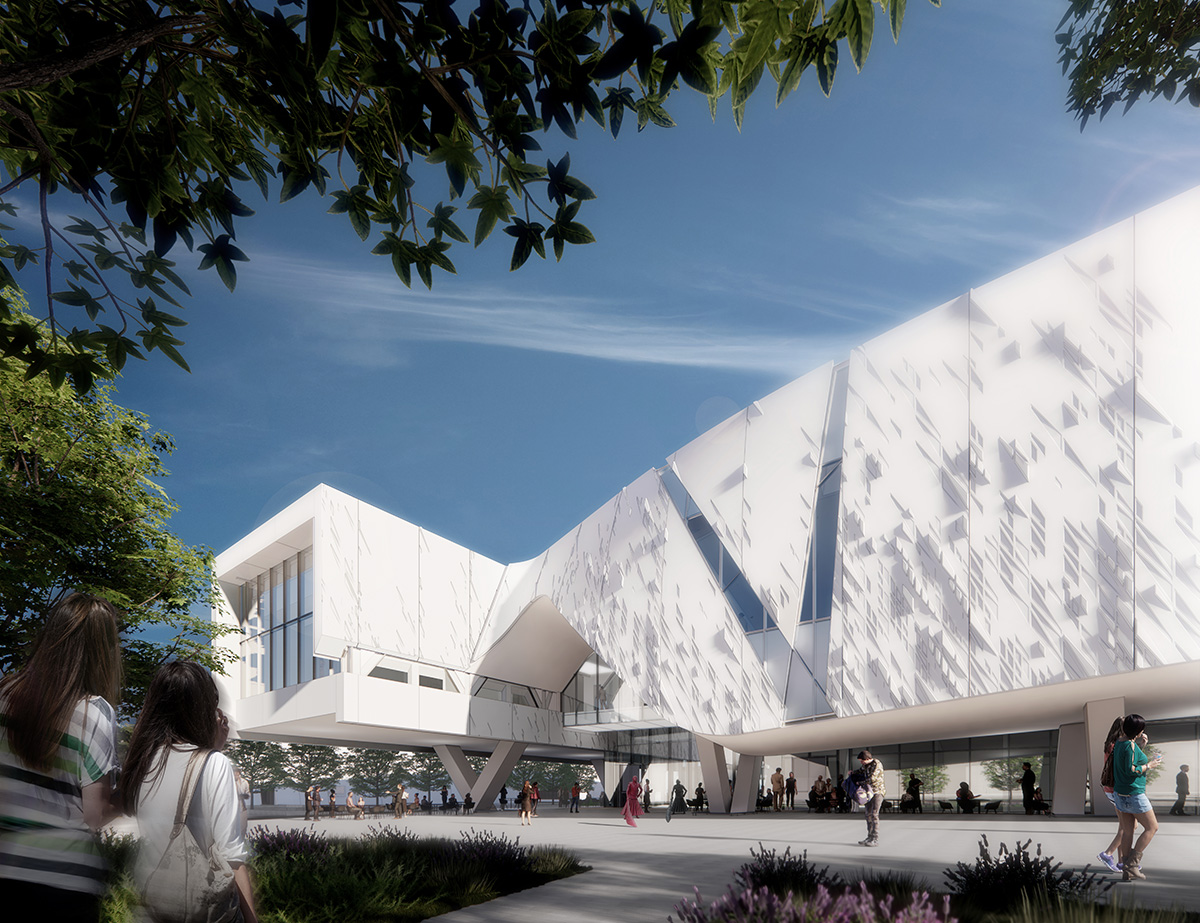 The complex has begun construction on the first phase of the Edith and Peter O’Donnell Jr.  Athenæum to create an arts destination for students, faculty, and community.

Set to be developed in three phases, the Edith and Peter O’Donnell Jr. Athenæum is a new cultural district located on approximately 12 acres at the southeastern edge of the campus, creating a new gateway to the University as well as a destination for students, faculty, staff, and the community that will foster engagement in the arts and learning. 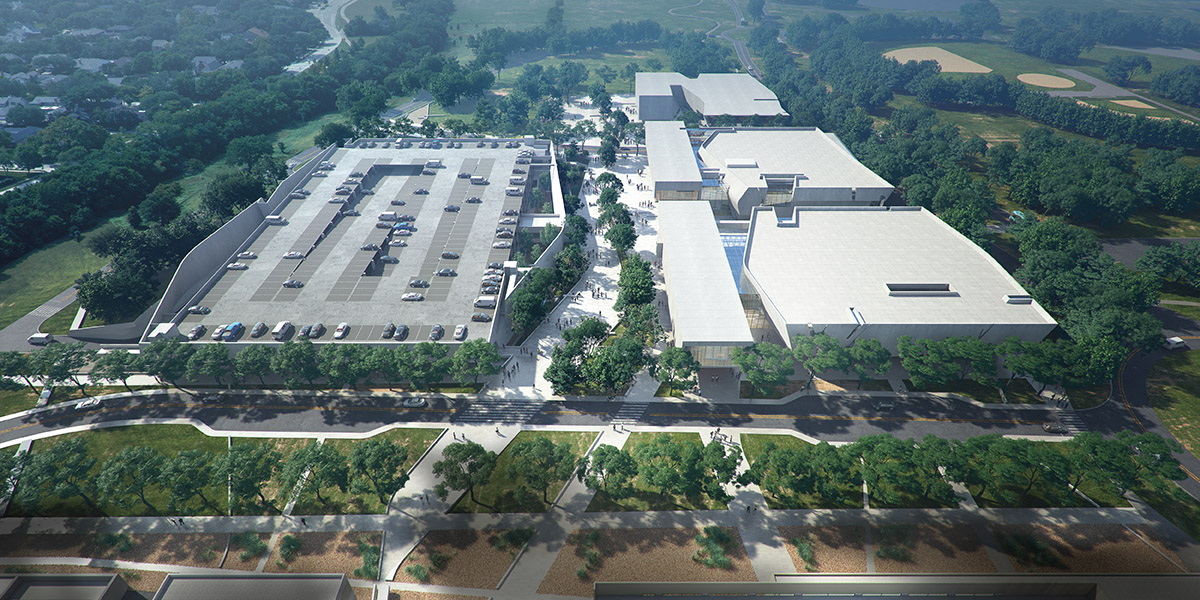 The project includes three new buildings-the second location for the Crow Museum of Asian Art, a performance hall, and a planned museum for the traditional arts of the Americas-in addition to a parking structure, all surrounding a central plaza that serves as the heart of the masterplan.

Morphosis created a cohesive vision and masterplan for the Athenæum complex, where architecture and landscape combine to form a dynamic new district with a distinct identity that establishes UT Dallas as a cultural hub.

The heart of the project is defined by a two-acre plaza, flanked by new buildings on the east and west sides, that will feature landscaped gardens, tree-lined walkways, paved open spaces with benches and water features, an amphitheater, and contemporary sculpture from the Crow Museum’s collection.

Landscaping and open space are used intentionally in the masterplan to knit together the various buildings within the district and to create an important link to the rest of the campus. 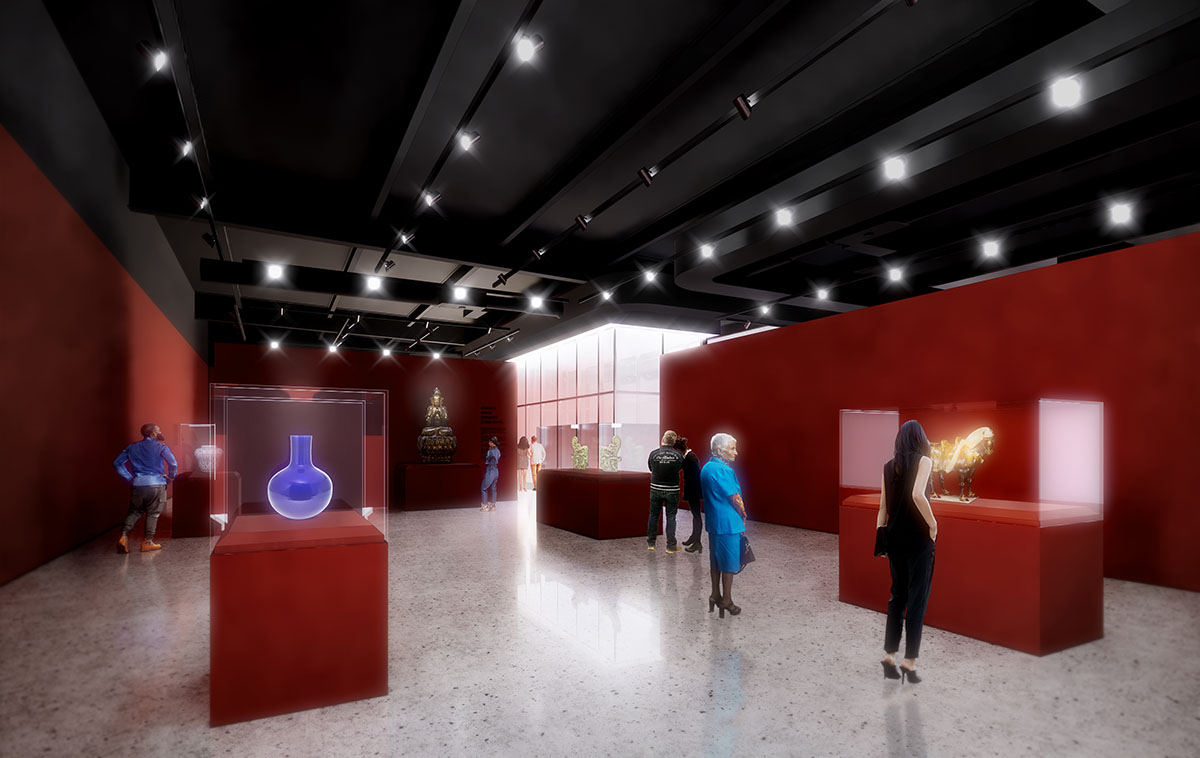 Rendering of Crow Museum of Asian Art at the O’Donnell Athenæum at UT Dallas, view of interior gallery

On the western edge of the plaza are three buildings: the two-story, 68,000-square-foot (6,317-square-meter) Crow Museum, which includes 12,000 square feet (1,114-square-metre) of contiguous outdoor space for programs and events, which will be completed as the first phase of the campus.

The third phase of the campus will comprise a two-story 50,000-square-foot (4,645-square-metre) museum for the traditional arts of the Americas.

On the eastern edge of the plaza, masked by a freestanding wall, is a three-story 1,100-car parking structure with two levels above grade and one basement level walk-out that will serve the Athenæum and campus.

The three cultural buildings are all designed with second floors that are larger than the ground floor, creating covered exterior spaces, where buildings, plaza, and landscaping fuse together to form intimate spaces that can be used for studying, building entry, daytime and nighttime events and gatherings, performances, art display, and everyday campus life. 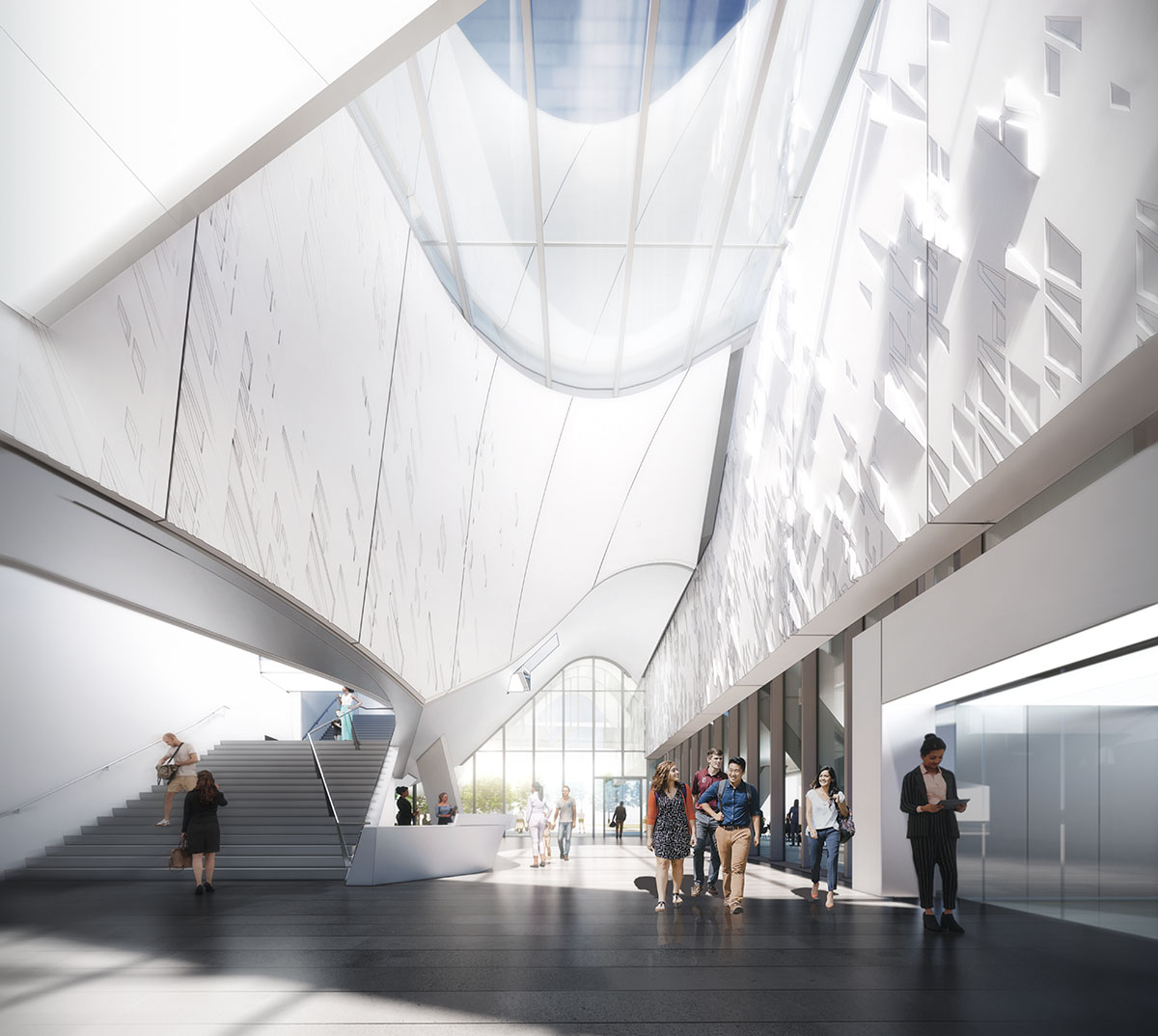 Rendering of Crow Museum of Asian Art at the O’Donnell Athenæum at UT Dallas, view of lobby

Each building will be clad with white precast concrete panels featuring a three-dimensional pattern created through an innovative process designed by Morphosis.

"Morphosis is pleased to partner with The University of Texas at Dallas for this important project, giving us the opportunity to help shape the University’s bold vision for the arts on campus," said Arne Emerson, Morphosis Partner and the Design Partner leading the project.

"The O’Donnell Athenæum will transform the UT Dallas campus with buildings and open spaces for the visual and performing arts that will allow both students and the surrounding community to experience the convergence of art and architecture in ways not previously possible at the University," Emerson added.

The new building includes 16,000 square feet (1,486-square-metre) of flexible gallery space. It will be anchored by the Crow Museum of Asian Art, with additional space for the display of new acquisitions or temporary exhibitions.

Large windows at the ends of the galleries allow for ample natural light, but can also be blacked out for more light-sensitive objects. The building will house a state-of-the-art conservation lab, seminar rooms, administrative offices, art storage, and the Brettell Reading Room, which will house the personal library of Rick Brettell. 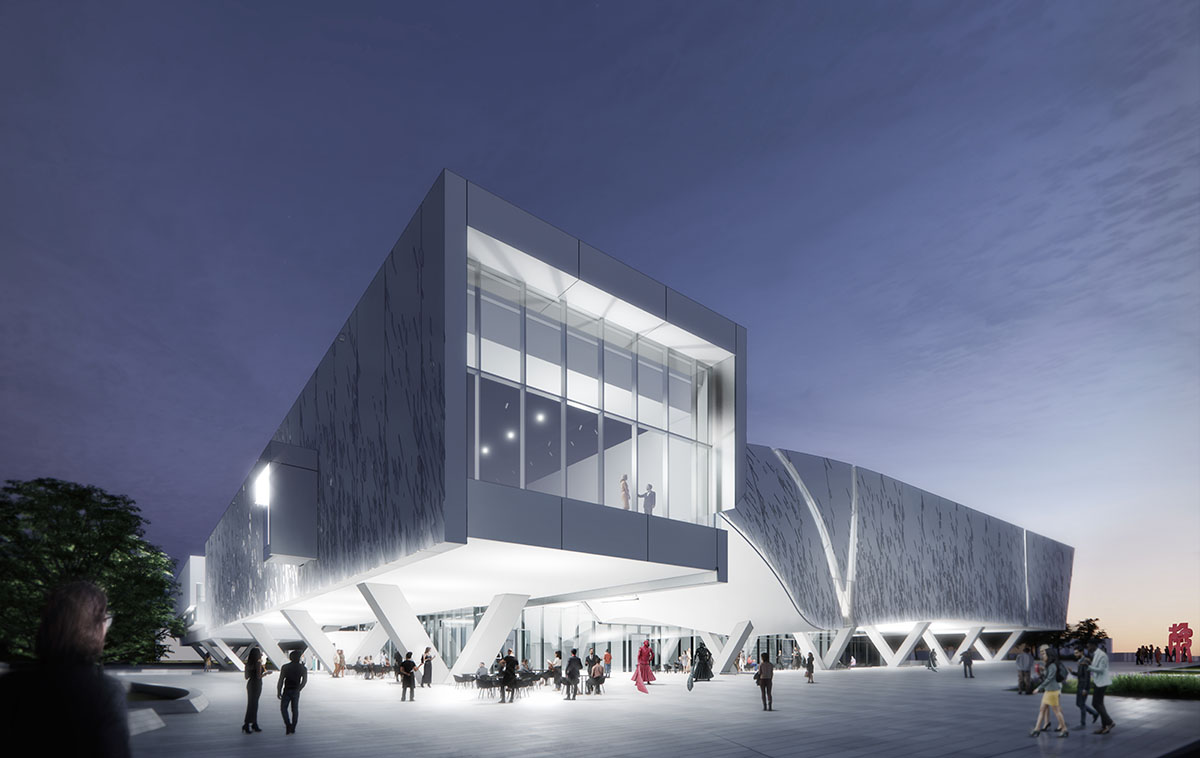 Rendering of Crow Museum of Asian Art at the O’Donnell Athenæum at UT Dallas, view of plaza from north direction

The Crow Museum will continue programming in its current space in the downtown Dallas Arts District, providing an extension of the campus museum. 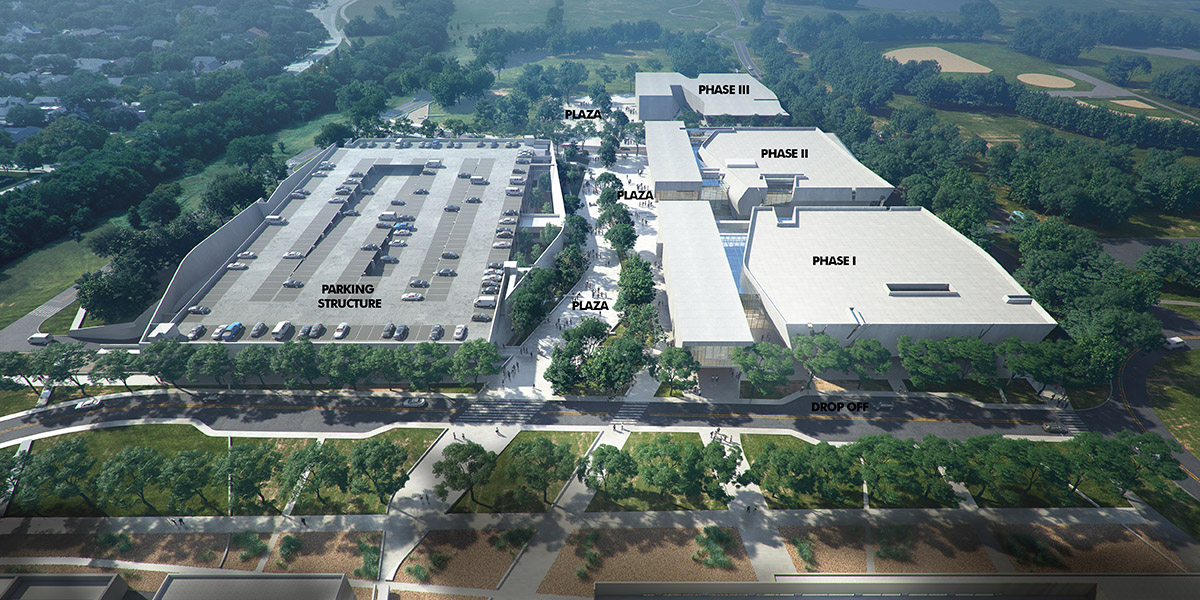 Phase I of the O’Donnell Athenæum, the campus location of the Crow Museum of Asian Art, is expected to be completed in spring 2024.

Morphosis was founded by Pritzker Prize-winning architect Thom Mayne in 1972 in Los Angeles and New York City as an interdisciplinary practice involved in rigorous design and research that yields innovative, iconic buildings and urban environments.

Morphosis recently completed a conference center in China. The practice also completed the first phase of a high-speed rail station in Vigo, Spain.

Top image: Rendering of Crow Museum of Asian Art at the O’Donnell Athenæum at UT Dallas, view of arrival and drop off from northwest.

All images courtesy of Morphosis.