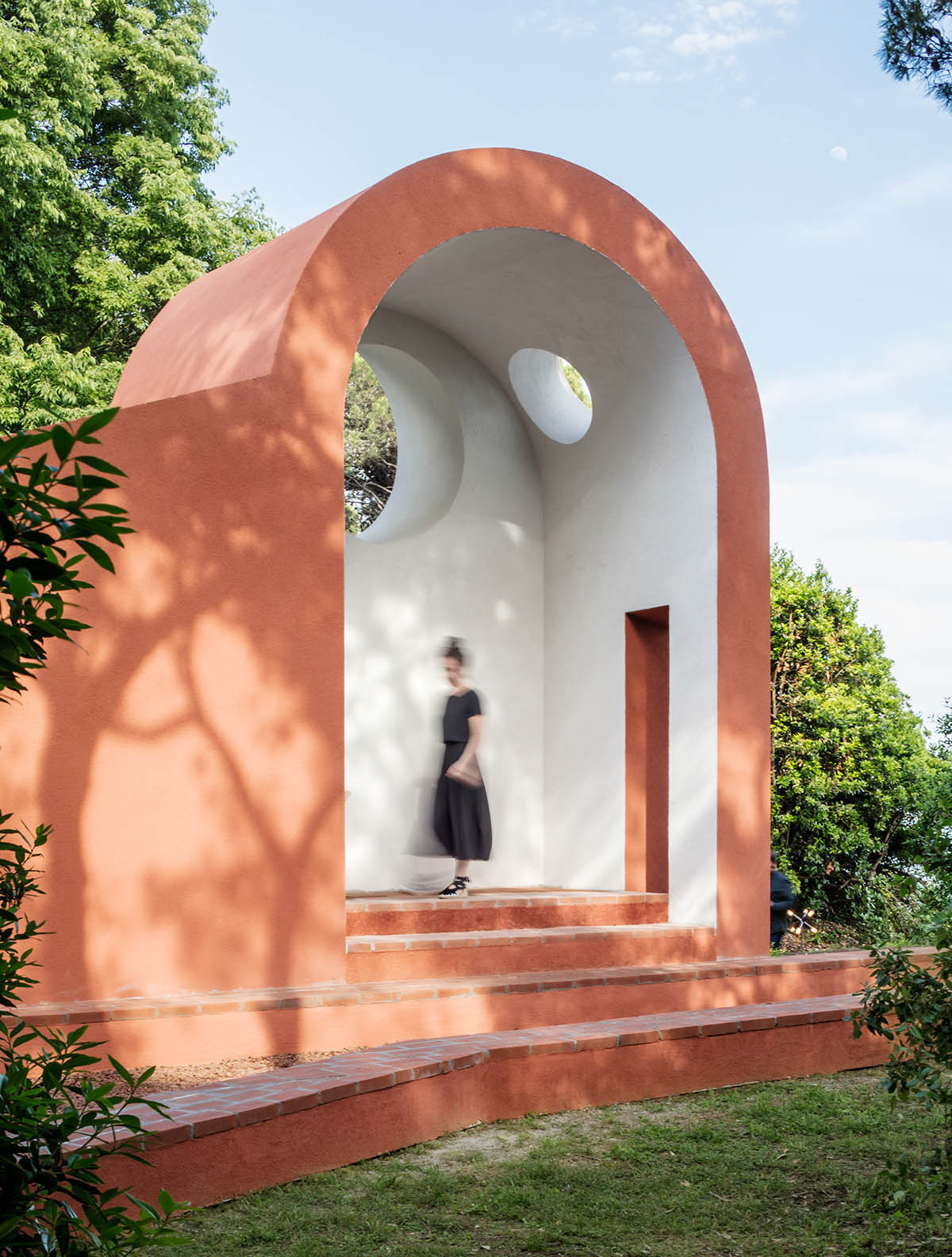 Spanish studio Flores & Prats has built a light pink-coloured chapel that resembles "an excavation in a wall", which is located in the garden of San Giorgio Maggiore in Venice.

Presented at this year's Venice Architecture Biennale, the chapel, called the Morning Chapel, was designed as one of 10 small chapels for the Holy See Pavilion, representing the Vatican City. 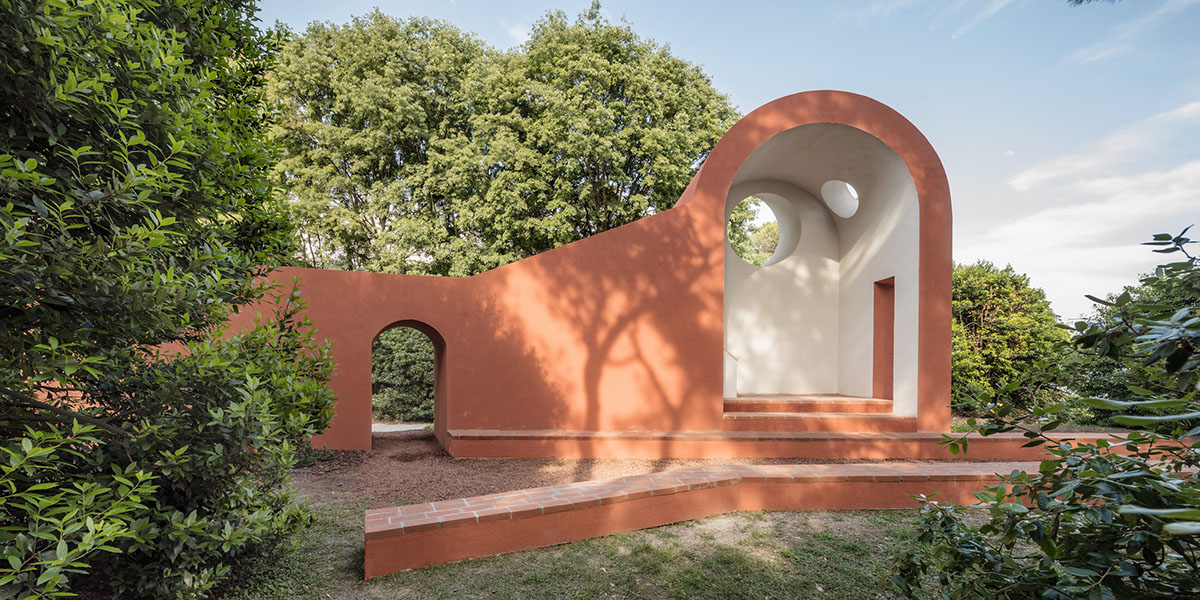 The Vatican is participating in the Venice Architecture Biennale for the first time this year, which is curated by Yvonne Farrell and Shelley McNamara of Grafton Architects under the theme of "Freespace". The Vatican City's theme tries to catch a different meaning of the 21st Century chapels, without following any typological discourse on chapel design.

The Morning Chapel is situated in an island and then inside a garden, which allows a state of being where one's mind can drift to a peaceful place of reflection. The garden in San Giorgio consists of a fan structure of walks, starting from Palladio's Cloister towards the Lagoon. The Morning Chapel was built along one of these long paths, and sits right before this walking line meets the water. 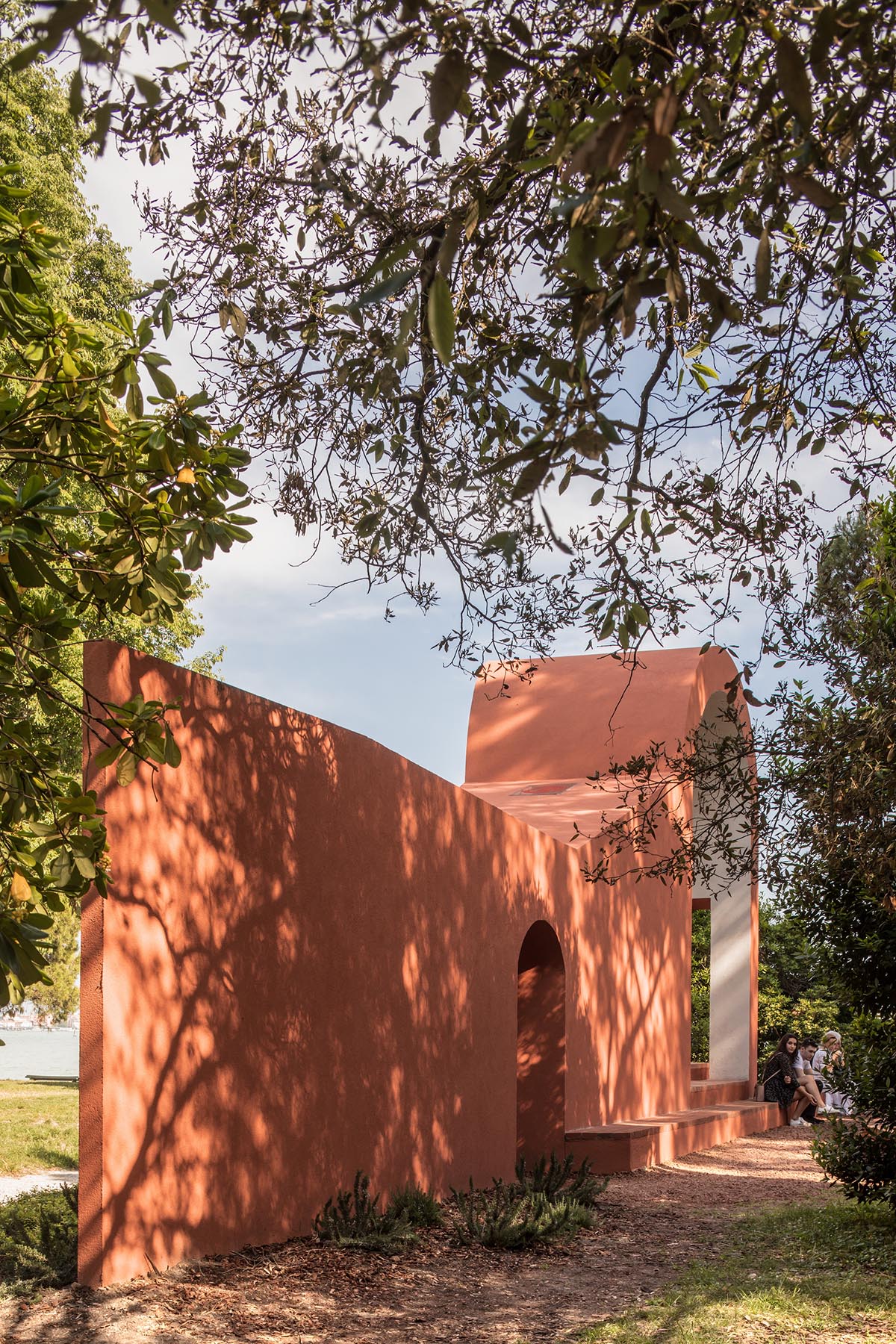 "The chapel is presented as a wall parallel to the path. This wall has a door, offering the option to step aside from the common route and move into the forest, abandoning the known destiny offered by these lineal paths in favour of the unknown, at risk of disorientation," said Flores & Prats. 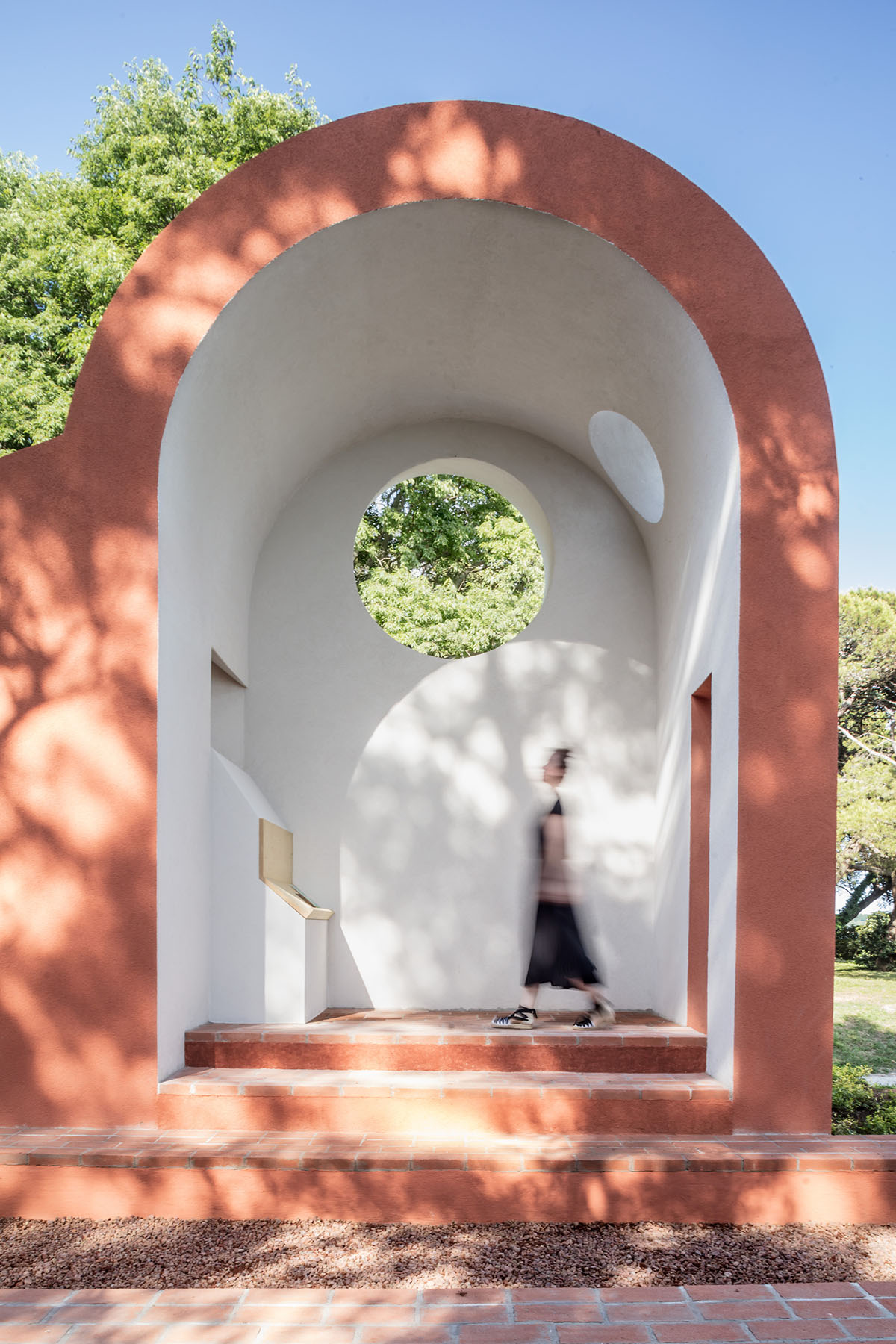 "The chapel becomes a door to the forest, to the grander entity to which it belongs: a natural dome made out of the adjacency of tree branches."

"The fragmentary condition of the chapel is thus complemented by the pine forest, and borrows its natural qualities from the trees in it: the smell, the fresh air, the noises and the light. Both elements, built and vegetal, form a natural clearance that embraces the visitor and creates a place to stay. It is a change of rhythm, a change of breath," the architects continued. 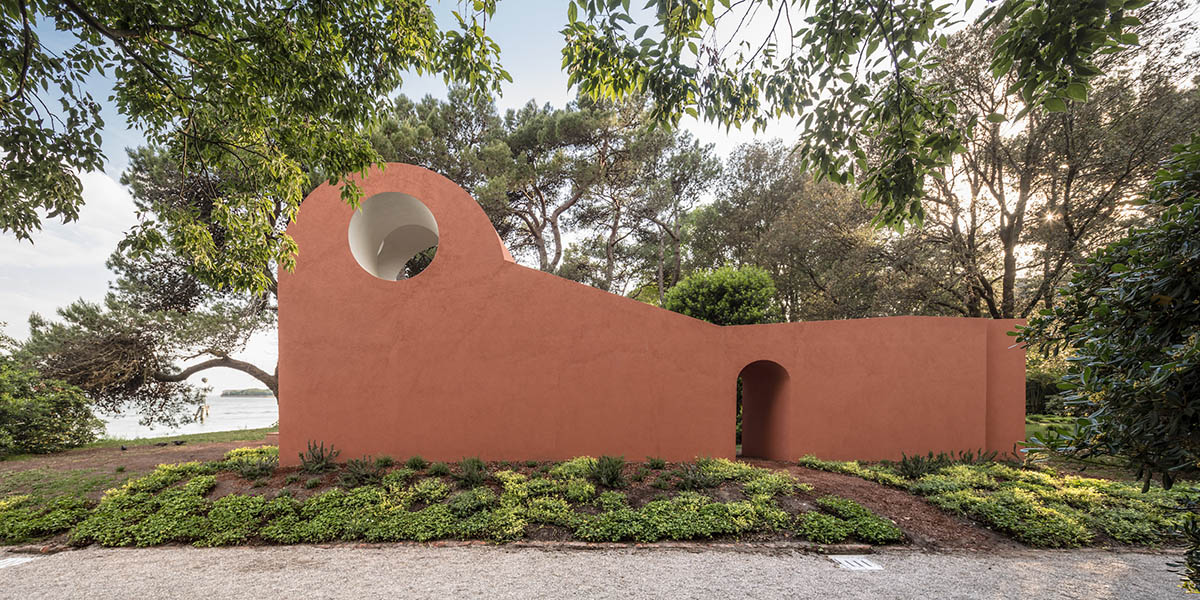 The studio chosen the site situated at the eastern part of the island, where the morning starts and the chapel can catch the first sun of the day. Since this chapel becomes an early morning place, it gets the first sunlight and becomes visible through a ray of light that trespasses a circular hole in its wall.

The Morning Chapel, catching the sunlight on its walls, and the island forest, forms a continuous canopy in darkness, together establish a quiet place, an invitation to sit alone or in a group. Described as "an excavation in a wall", a chamber in its thickness is opened to one side, containing levels and light, a place to sit protected from the sun and the rain.

The chapel conceived as a compact construction with a continuous surface, to avoid expressing its building details, favouring instead its solid, primitive aspect. 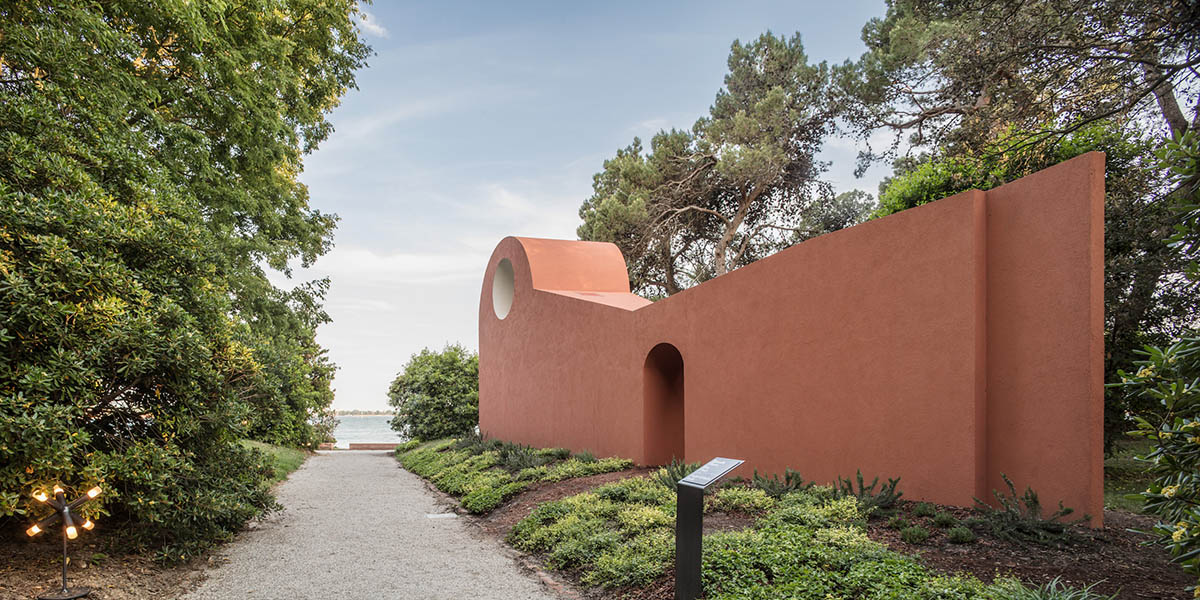 "This antique condition of its form and finishing makes it something in between a forgotten fragment from a previous construction and an open chapel from the beginning. It moves between memories of the ruins at Villa Adriana to the open chapels of Latin-America," added the architects.

"Once there, one is confronted with the same end that the lineal walk was leading to. The difference is that The Morning Chapel builds another perspective and a meeting place."

The chapel doesn't offer a specific meeting place but it allows a variation of encounters. "Sitting in this place there is a double focus of attention: one towards the edge of the island and the Lagoon; the other at the casual nature of people meeting around, all having arrived there due to magnetism of the Venice Biennale, sharing a common curiosity, a coincidence to celebrate," continued the studio.

Flores & Prats was founded by Ricardo Flores and Eva Prats in 1998 in Barcelona. They combine design and constructive practice with intense academic activity. Flores & Prats also presents the Liquid Light at the Arsenale.

Norman Foster's tent-like wooden chapel is also among other chapels exhibited at one end of the Venetian island of San Giorgio Maggiore in Venice.

The 2018 Venice Architecture Biennale, curated by Yvonne Farrell and Shelley McNamara, will be on view from May 26th to November 25th, 2018 in the Giardini and the Arsenale, and around other venues in Venice.