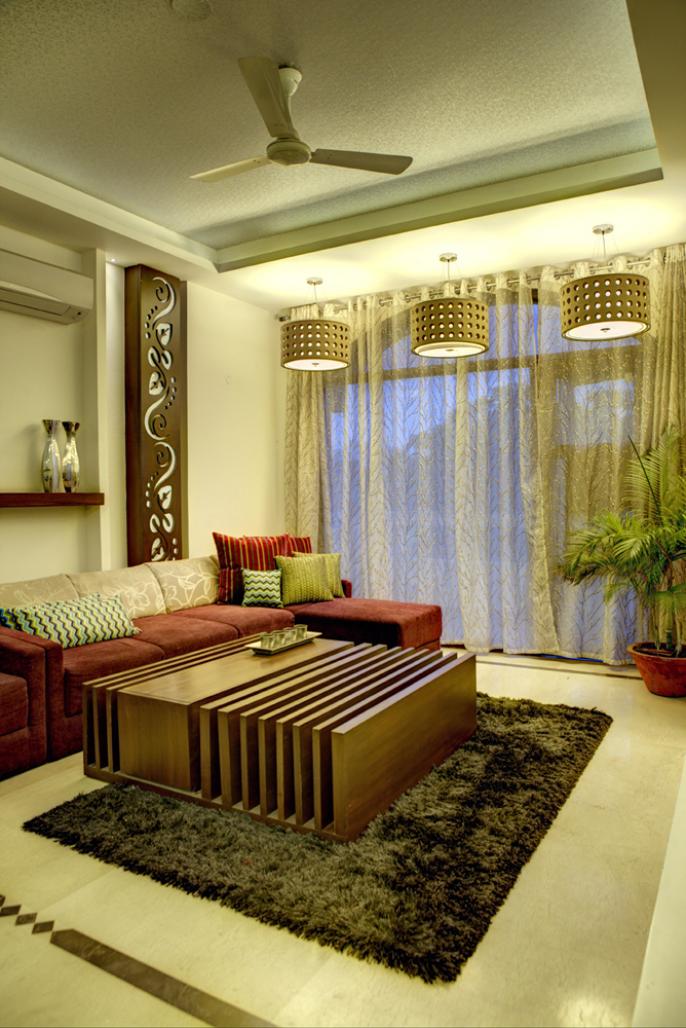 It’s always an overwhelming feeling to be invited within the private periphery of a family in an emotional & personal context. The outcome can be taken to a beautiful level only when a designer is made to experience & touch the warmth of the family he/she intends to design for. Such was the trust that the clients Neelima & Kapil bestowed upon us when they approached us to design their 1650 sq ft. apartment for them to call it their Home. Their sole requirement was to bring in a completely modern outlook to their house with lots of Whites & Greys to compliment the green that the house faced.

The end product is achieved through conceptual takes at various design levels, the initial idea was to remove the place from clutters & obstructions so as to greet the small family with a more seamless & free flowing area. Rectangular spaces emerge with careful planning and insertions of civil alterations at several places. Focal points were determined and developed to bring in a lot of storages in aesthetically pleasing manner. This can be seen on the wall adjoining the dining area as well as the enclosed area between the rear bedrooms. Attention to thematically bring in straight lines on to the horizontal axis of the house was the conceptual basis while designing this apartment. The center table in the living room exemplifies the concept. Ambient light management emerged with the use of glowing niches, backlit laser panels as well as the hanging lights. To enhance and accentuate the Whites & Greys, bright color insertions were brought in through fabrics & furnishings which can be seen in the sofa with the use of Wine colored fabric along with lot of Greens & Blues on the cushions. Through every corner of the living & the dining room, one can get the pleasure of experiencing a lot of greenery that the apartment overlooks, which is heightened with the use of just shear instead of heavy fabric as the curtains. Traditional inserts can be seen at various intervals through backlit laser cut floral patterns. Similar floral pattern is also present throughout the ceiling by using wallpaper which runs through majority of common areas.

Planning is such that as the door opens, you reach an open foyer acting as a threshold between the inside and the outside. The living and the dining area run along the foyer, the space distinctions are designed to be felt at only the ceiling level with the play of level differences at many places such as dropped down foyer ceiling as well as the enclosed area between the rear bedrooms. The kitchen is onto the left of the foyer, adjacent to the dining area. The master bedroom is onto the front corner of the house facing the pleasing green belt in the front. There are two bedrooms at the rear with private balconies & washrooms. The dining & the living area are united into one space to magnify the expanse of vision.

A lot of storages are placed in the master bedroom as per the requirement which is finished in white pigment paint so as to avoid heaviness. Beiges & Browns are used in this room on the furniture as well as fabrics to maintain a residential feel which in turn looks at a tall dull Yellow finished cupboard with custom-made handles to break the monotony of colors. High bed back with cushioned fabric in dark Brown with asymmetrical side tables creates sense of coziness.

A playful identity has been given to the kid’s bedroom at the rear of the house by using shades of Yellows & Greens along with a tint of seriousness by using Beiges in the fabric. The blue wall gives a vibrant feel to the whole setup with random cuboids as storages at one corner which additionally adds a boyish character for young son of the couple. The storages here are painted with PU pigment paint in matt finish. The cupboards on to the opposite wall have panels of Yellows & Whites with custom made door handles of different colors.

The bay window acts as the focal point in the guest bedroom. This is placed adjacent to the wall with LCD panel finished with dark Victorian wallpaper. The storages here are being finished in light Beiges & Maroon, latter being used in depressed niches to avoid its dominance.

One of the key elements of the house was the dining table for its placement in the central area & visibility through majority of the house. It was designed in a way to have an off-centered support which runs below the table & goes on to meet the pebble bed below the storages on the wall. The dining table has a backlit glass top with visible frames of wood to maintain the harmony & balance from the top. Minimalism can be seen on the shelf behind the sofa in the living room where a dedicated space for books & novels is created through a depression on the plank. The center table is a square shaped piece with voids & planks on the horizontal axis of varying depth that also caters to hidden storages as pullout drawers for stacking newspapers & magazines. The enclosure between the rear bedrooms is felt as a transitional space with high console finished in white PU pigment paint highlighted with the use of two hanging Moroccan lights and a small creeper falling onto it.

Overall this house can be seen as a take on the contemporary India with traditional inserts blending in at several places.