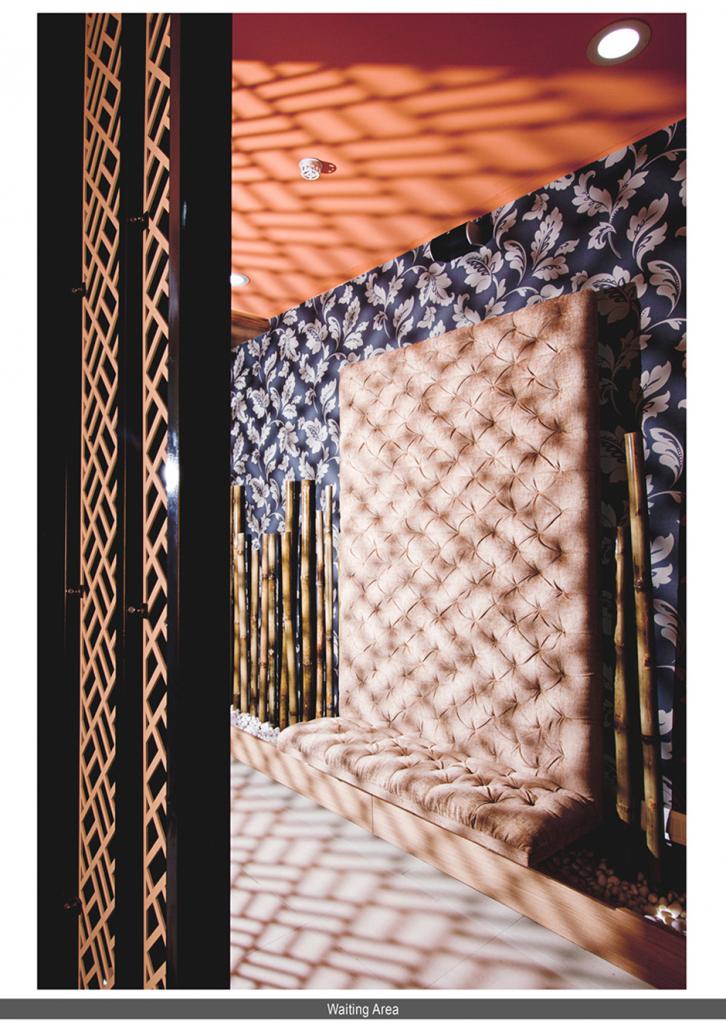 He left with a couple of special requests bestowed upon us:
• Endless storage capacity
• Splash of Orange Color (to match Company’s Product)

As interesting the brief was the outcome was even more fascinating. The main concern was never to accommodate the brief but to accommodate in such a way that the openness as well as the free flow is not compromised.

As one enters, a 100 sq ft. of open area greets the visitor with warmth as well as fresh energy in the form of a perforated cave maximizing the depth of vision. This area has a wall of wallpaper to its left with bamboos on a floating pebble bed adding life to the whole ambience. A well cushioned, wall mounted waiting seat adds panache to it.

The interactive hierarchy based planning was adopted in such a way that the everyday story became prominent even before the office was made functional. The Boss’s cabin was overlooking senior work-stations which in turn were overlooking the Junior Work-stations while setting apart the movement pattern of employees, guests and owner. The lounge was adjoined to the Principal cabin providing partial blindness to the visitor’s eye while the Principal is able to see through the majority of workforce area as well as the reception area. The service area including Pantry, Toilet and the Balcony was kept at the rear to avoid disturbance as well as to maintain cleanliness throughout the office.

An interesting design feature that we call “the metal mesh” caters to the possibility of creating openness throughout the office. The mesh acts as a dividing line as well as a holder which holds multiple hanging storage units. The intention of using such mesh was to significantly nurture optimum and precise privacy levels for the adjoining spaces. This also leads to intertwined and interactive play of spatial volumes. Certain light fixtures when switched on exquisitely, cast a series of interesting shadow pattern.

The lounge & the Principal cabin are placed adjacent to each other, with a three channel sliding glass partitions to separate the two. As and when required they can remain open or closed so as to act as two different units or as a single large unit. An interesting book shelf is mounted on the wall. This has been made using laser cut wooden jali and solid wood blocks. These blocks can easily be removed and re-placed in a manner to accommodate and display different sizes and faces of the books. To enhance the size of the Cabin as well as the lounge, grooves in plaster were made which run in a linear path at regular intervals. These are even more highlighted by painting the sunken surfaces with a dark color. This helps to enhance the longitudinal length of the cabin as well as the lounge.

An interesting play of color is achieved throughout the office space. This can be understood as an interactive balance between warm and cool colors, which are co-existent at every frame of vision. The color Orange was a must to be used as it symbolizes with the company’s product. Our intention was to bring in orange in a diminishing manner, and as a result, this can be seen through-out the ceiling which vanishes at the eye-level. The play of colors (green, blue, purple & grey) is introduced at several areas which in-turn brings in the desired youthfulness as well as energy to the whole ambience.