The Design Intentions are based on a revaluation of the sacred space considering the center of the chapel, the place of intercomunication of the prest and worshipers. it is also directly communicated with the movement of the sun and the meaning of christ that it withholds.Around the chapel is a thin circle corridor that is intended as a praying area where the light (bless)is recieved only from above, leaving the sides as oppressive metafore of life. The cross external cross is intended as a rock breaking elemente that snaps open the slice on the external wall.

width 17.50m
Hight 15.70m
Location: Sicily, Italy
Cost: 92.000,00 euros
Internal dome in its section from the lower part till the highest, becomes thinner every 5cm so the light glows though the highest part.

Chapel Mazzarrone by samuel drago in Italy won the WA Award Cycle 8. Please find below the WA Award poster for this project. 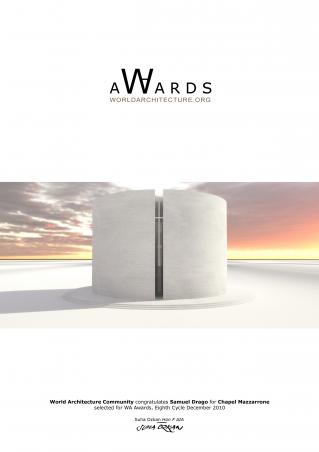