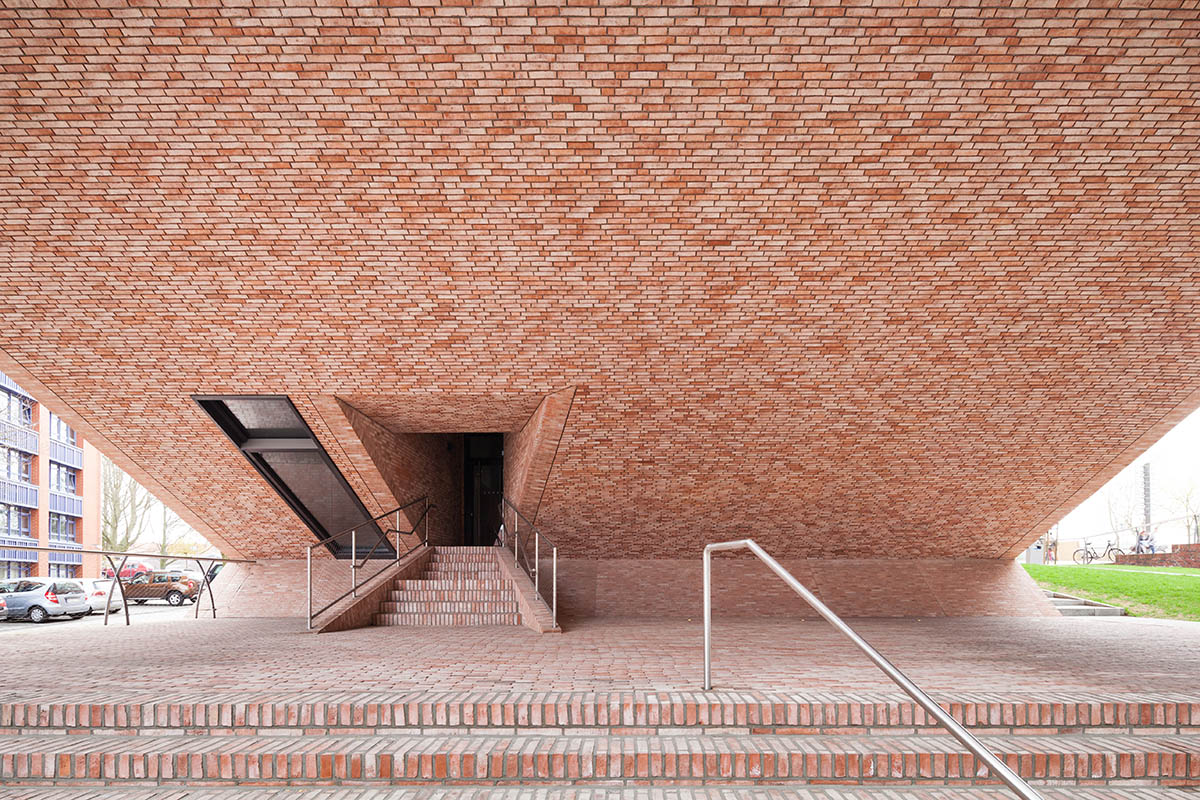 Twenty-five years ago, kister scheithauer gross completed its first brick building, the Institute for Biology in Halle. The replicated used brick of the façade is situated in the city centre in a self-evident way, and stands there today, still untouched by time. This is the starting point for the exhibition, which presents earlier brick buildings by the firm anew, along with current projects and buildings.

Building in brick implies an ability to adapt to a location and its atmosphere as well as social structures. The regional identity and character of cities are often associated with a specific type of brick. At a time of digital production, brick factories today are almost anachronistic places, where elementary work processes with lots of manual work take place and the brick is given its specific sand-coloured, reddish-orange, or sometimes greenish shade through the firing of the minerals in the clay soil. Each stone is thus a unique specimen and as a haptically rich product also helps the architectural project tell its own story. On the basis of filigree paper models set on brick bases, the exhibition presents eight projects by kister scheithauer gross, which has been designing and working with the sustainable and sensual material for a quarter of a century. 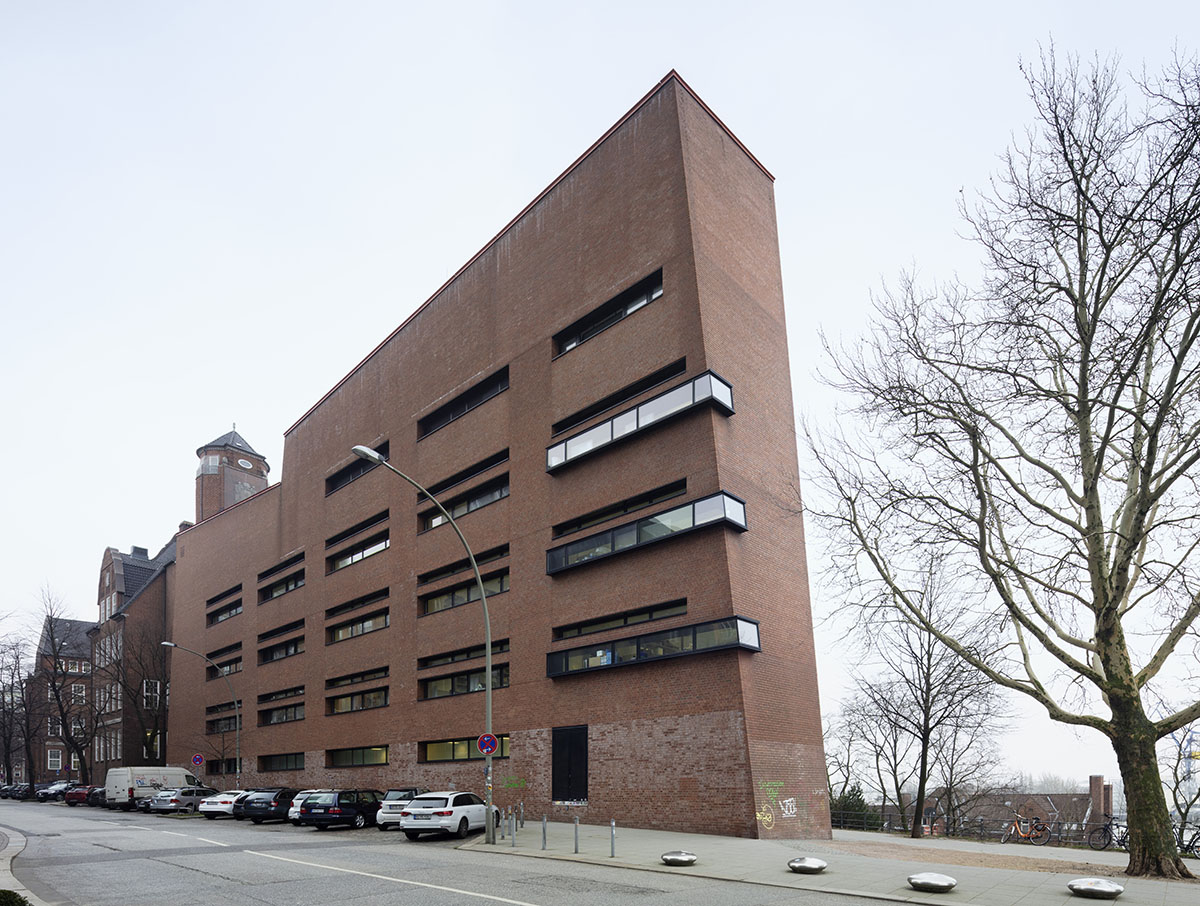 Each project, each building has its own history of creation. The colour, size, and composition of the bricks form a distinctive unit along with the mortise, which rounds off the individual brick picture with its width and colour. It is necessary to think starting from the building corpus and only then to develop a concept for the brick, and thus design a surface. If a building is not conceived based on its volumes, the façade remains mere wallpaper. The aim is to have the brick develop an architectural effect and become part of the composition as a whole.

In addition to the Leibniz School of Education (LSE), Hannover, the Alfred Wegener Institute (AWI), Bremerhafen, the Centre for Ageing, Reliability and Lifetime (CARL), Aachen, and the Bernhard Nocht Institute (BNI), Hamburg, in the exhibition installation, which in itself is a building layout made of brick, the following projects and buildings are presented:

The HolidayInn in HafenCity in Hamburg is characterized by the interplay of the rhythmic structure of the façade with its columns and pilaster strips in a bluish red-violet brick and the varying arrangement of the window elements, which break up the façade and hence give it a unique dynamic. 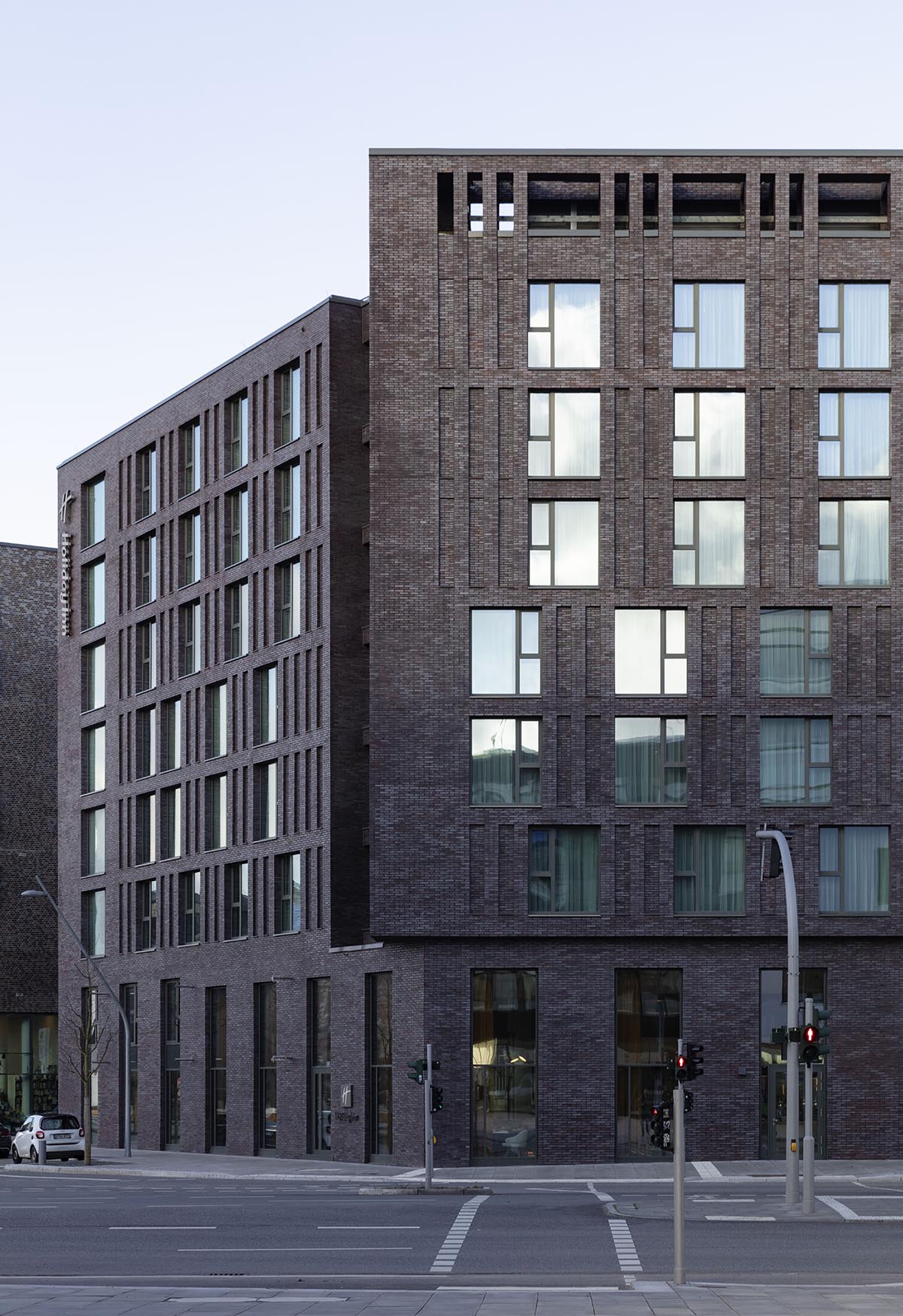 The light pink-beige brick of the new BIOM laboratory, teaching, and office building of the University of Bremen visibly freshens up the dark-coloured stone of the surroundings. The thin format of the bricks emphasizes the length of the building and also gives it the necessary lightness.

The new building of the WiSo Faculty of Management, Economics and Social Sciences in Cologne contrasts with the old building with its elegant mortise, but takes up reference to it again with the rhythmic structure and materiality of the façade of brownish-clay-coloured brick. 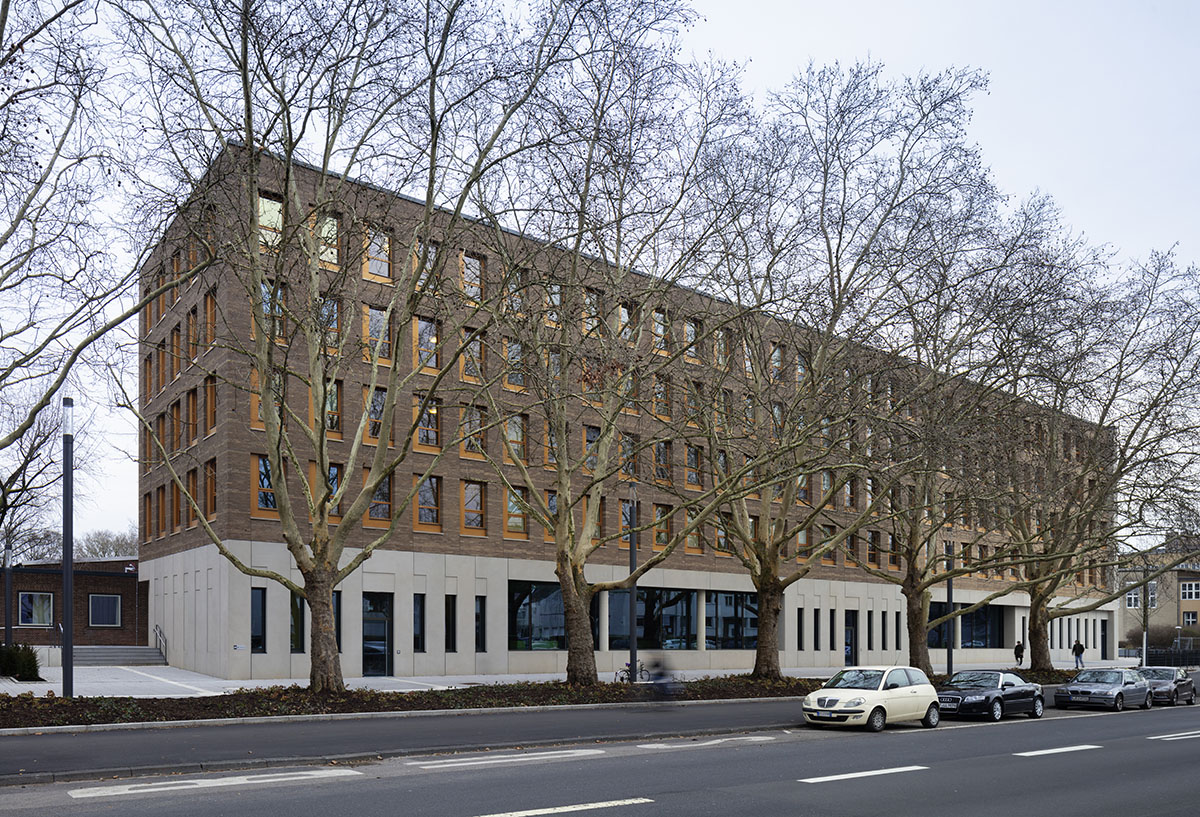 The ZWEI ensemble of residential buildings in Hannover with its circle geometries gives rise to a dynamic of striving as a result of the rhythmic arrangement of the projecting cornices. The light-beige-red terracotta clay of the brick gives the impression of ‘hand-processed’ pottery vessels.

kister scheithauer gross stands for an intensive dialogue between site and typology. This superordinate context is the basis for the development of concrete building sculptures whose symbolic character shapes the site and type from abstract visions.

Johannes Kister und Reinhard Scheithauer established the firm Kister Scheithauer & Partner as young partners in 1992. Since 1997, Susanne Gross has been part of the firm as the third partner, which now operates under the name kister scheithauer gross. She teaches design at the university in Wuppertal, while Johannes Kister teaches at the Anhalt University of Applied Sciences at the Bauhaus in Dessau. The firm shaped the campus there with its urban and architectural form to a significant extent. 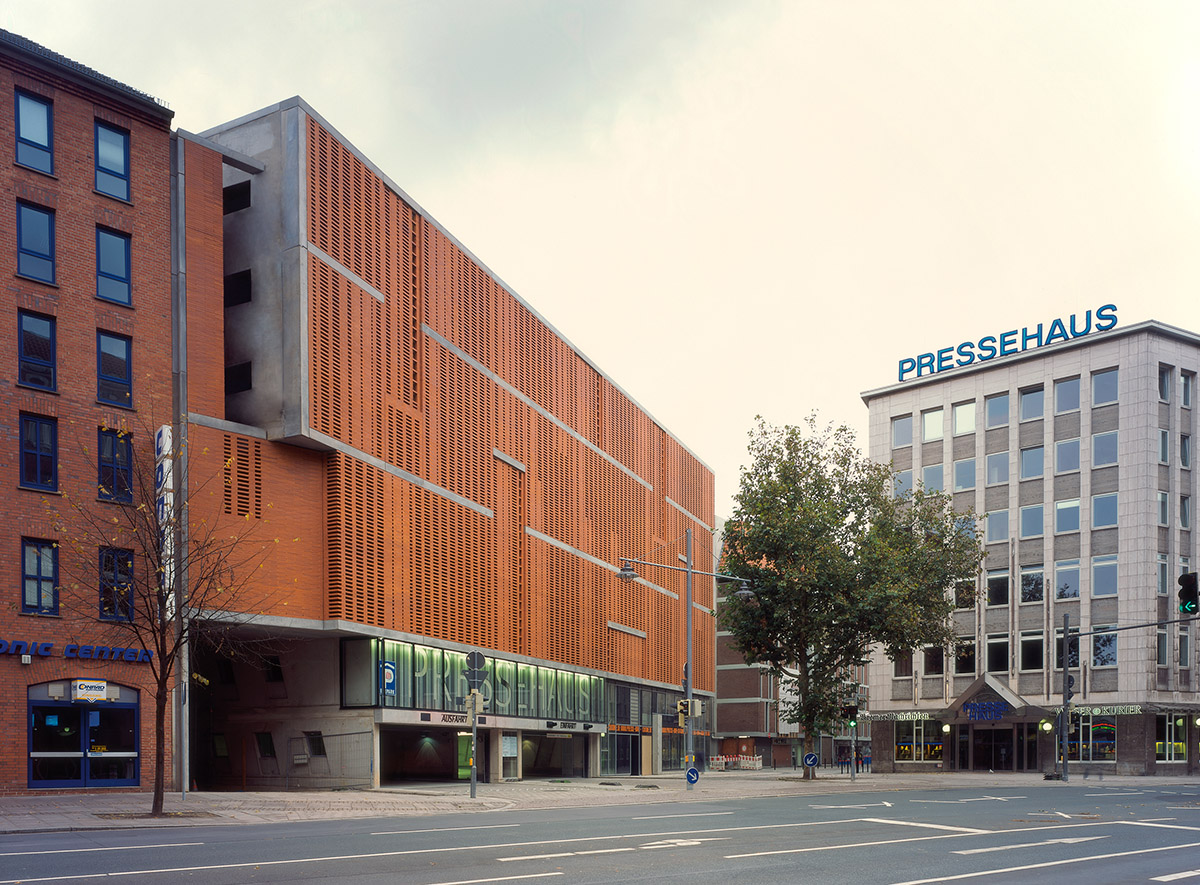 From its offices in Cologne, Leipzig, and Berlin, nearly 100 architects around Germany tackle the realization and transformation of high-rise buildings and the development of urban-development and interior design concepts. One particular focus is on the planning of highly specialized laboratory and institute buildings for the research landscape in Germany. Two of the four high-security, biosafety level 4 laboratories in Germany, for instance, were thus created by kister scheithauer gross.

Exemplary projects are the Double Church for Two Faiths in Freiburg, the “Siebengebirge” in Cologne, the university campus in Bremerhaven and Cologne, the Händelhaus Karree in Halle/Saale, and the master plan for the Gerling area in Cologne. Further milestones in the history of the firm are the transformation of the Quelle complex by Ernst Neufert in Nuremberg as the second-largest building in the Federal Republic and the new construction of the Laurenz Carré opposite the south portal of the Cologne Cathedral.