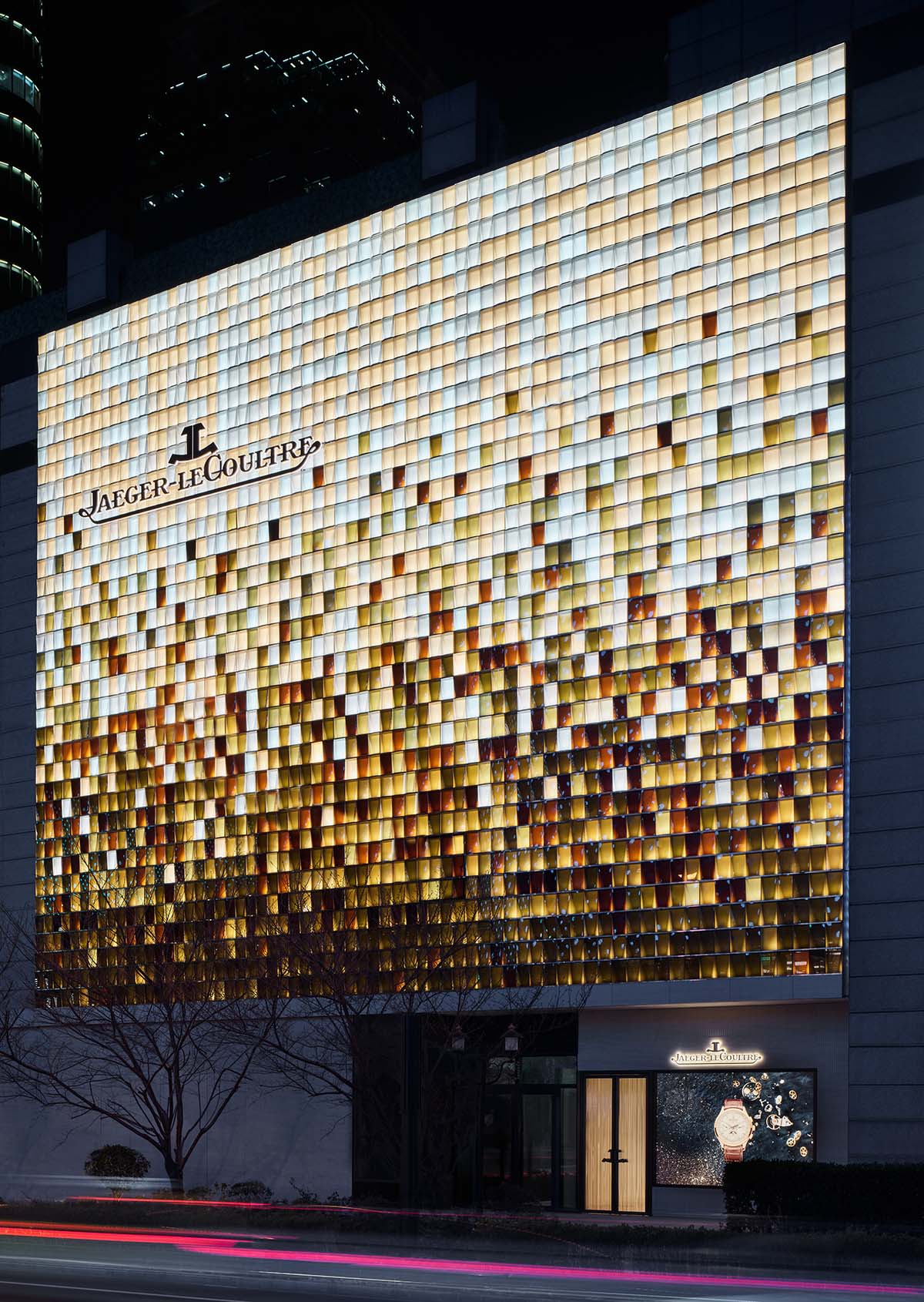 The new flagship boutique features a shimmering façade inspired by "interlocking watch mechanics" reflecting itself as a luminous surface from afar. 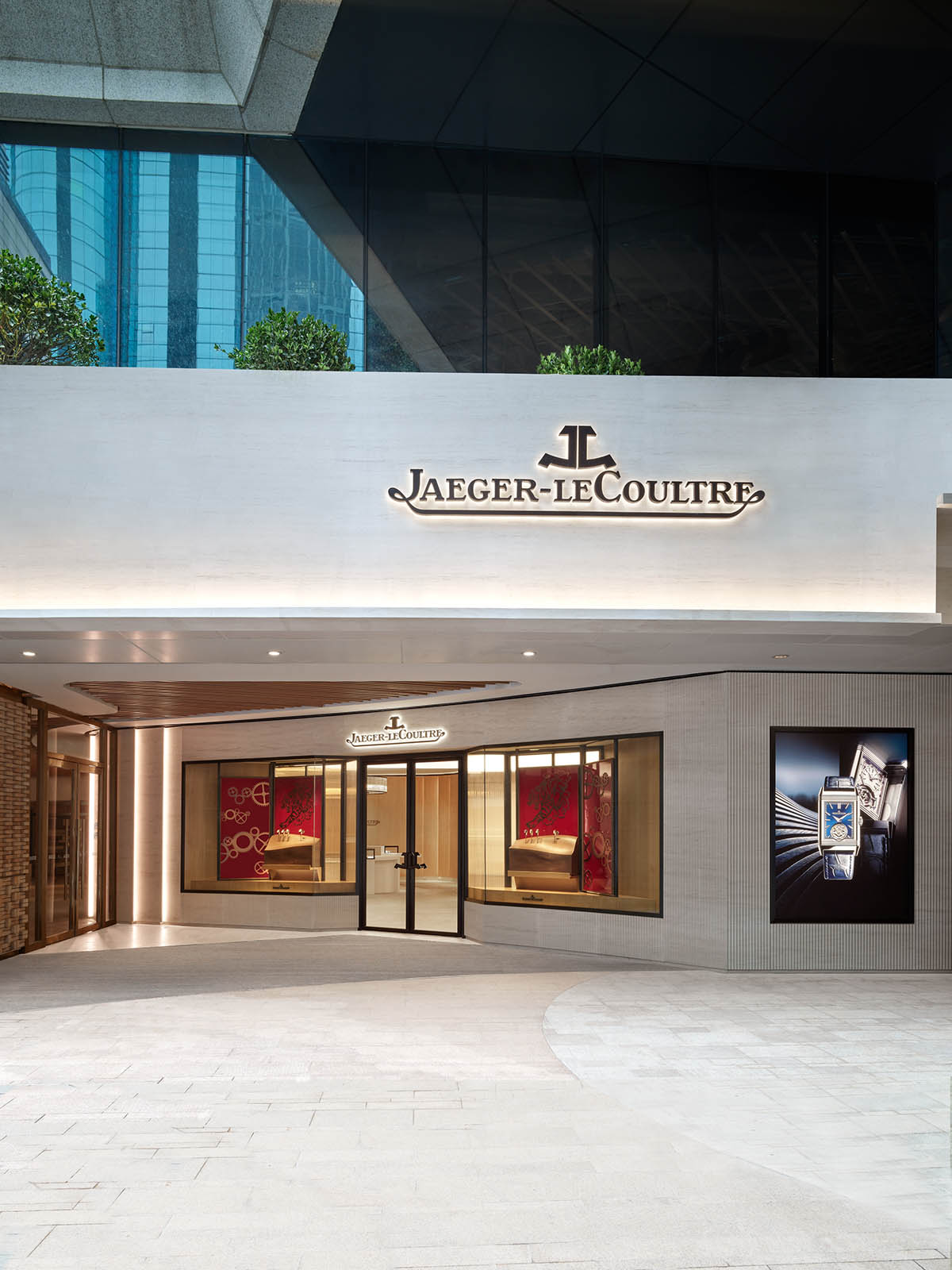 Snøhetta was responsible for the design and configuration of the interiors to celebrate and highlight the brand’s history.

The firm used a neutral and calm material palette, creating a timeless backdrop complementing the brand’s culture and philosophy.

In the interiors, the studio created horizontal niches that draw the visitors’ attention to the products - the niches showcase a vast selection of handcrafted timepieces and accessories delicately around the store. 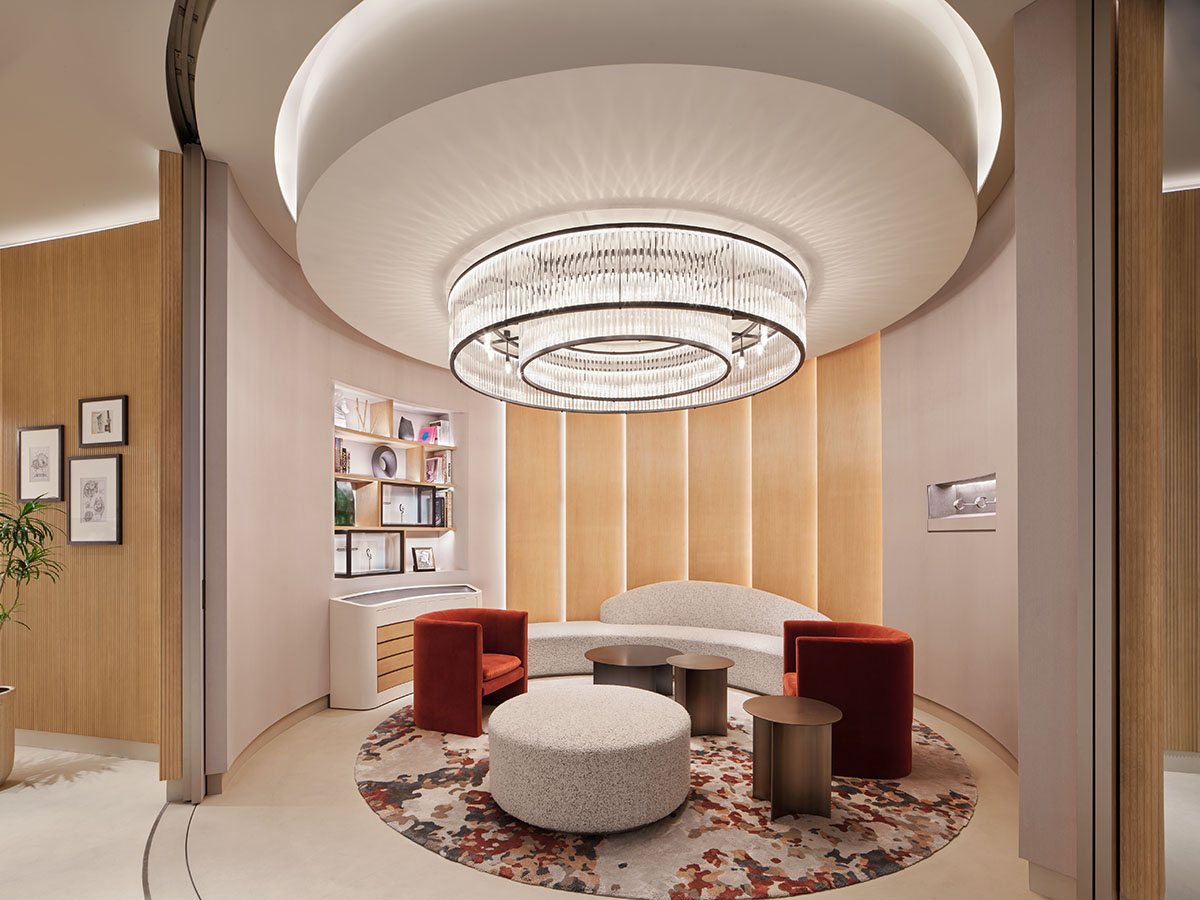 An in-store watchmaker booth takes place within the boutique, providing customers with unique access and insight into the fascinating and meticulous craft of watchmaking.

"For Snøhetta, working with Jaeger Le-Coultre was an inspiring journey. We are immensely proud to have been a part of this collaboration, understanding the brand, its rich heritage, and its complete dedication to craftsmanship," said Robert Greenwood, Partner, and Managing Director of Snøhetta Asia.

"Together, we have managed to bring a piece of the Vallee de Joux into the heart of the Shanghai metropolis," added Greenwood. 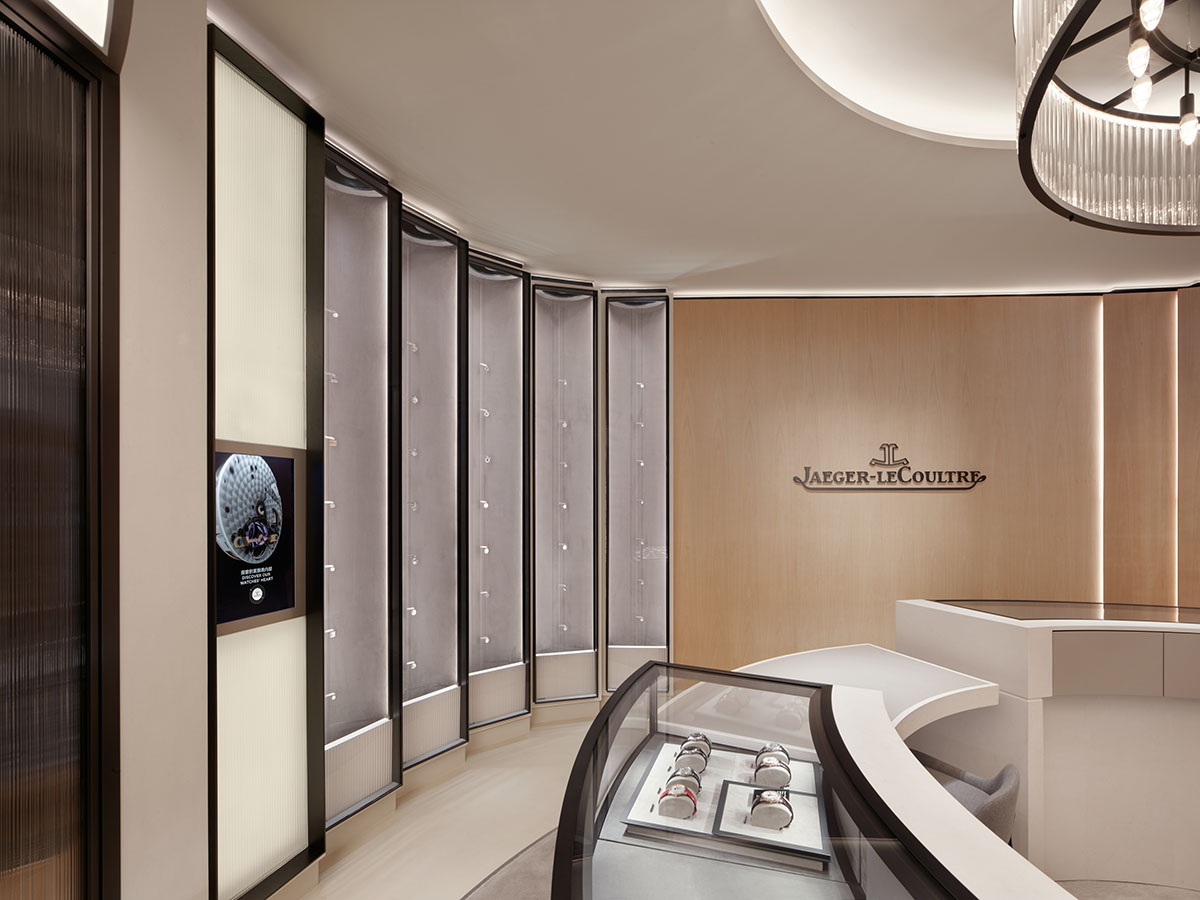 The firm uses a specific geometry in the interior, while watch components inspire the whole configuration. "As an example, the logo wall is interlocked by a counter component at the bottom and a ceiling component at the top," said Snøhetta in its project description.

"The store’s interior layout has an intricate relation between each space and component which together creates the collective whole – in the same way, that every part of a watch movement must work together for it to function properly."

At the center of the interior, there is a horizontally-focused "slot" to showcase the watches and to emphasize the products as the heart of the store. 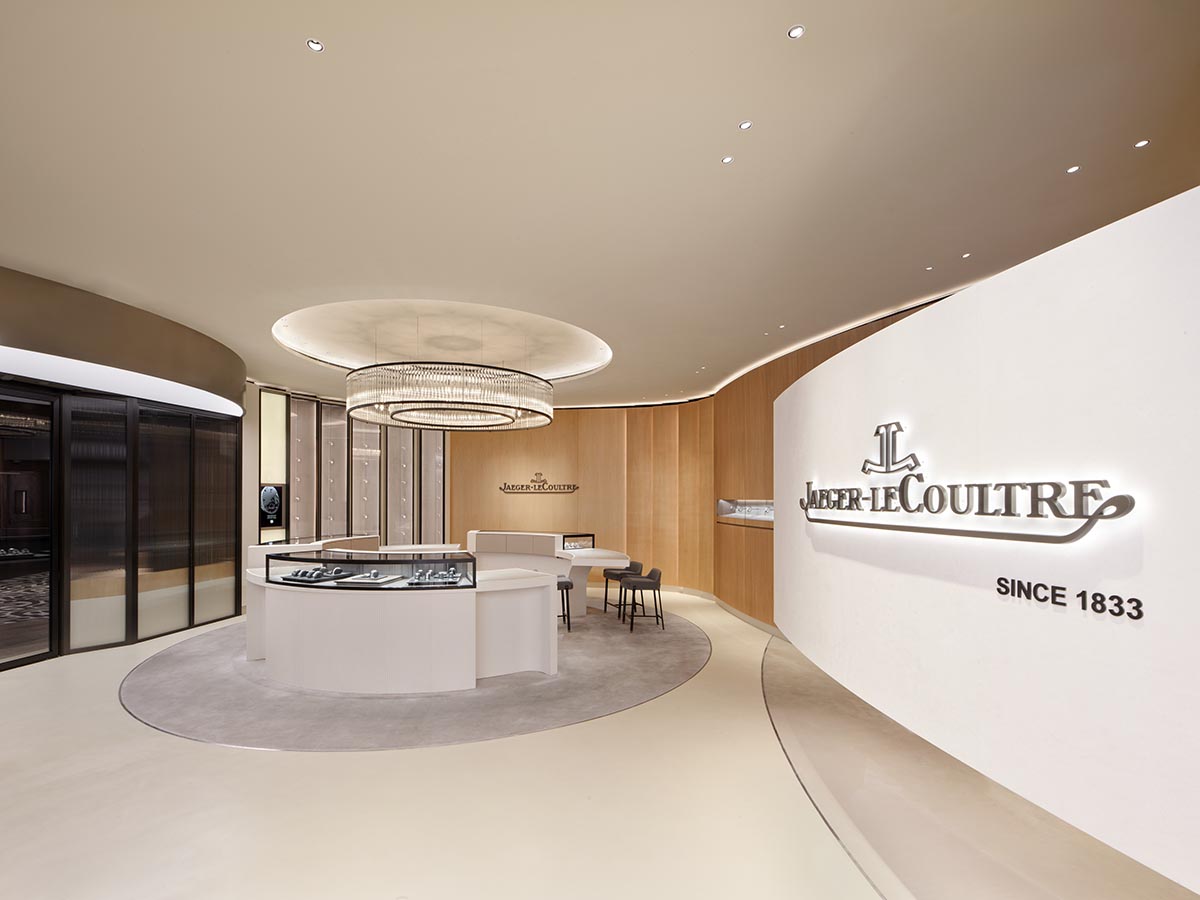 According to the firm, "the overall interior and ambiance of the new Shanghai flagship boutique are unique compared to other Jaeger-LeCoultre stores around the globe, with a more minimal and modern expression."

Atelier de Antoine, a room dedicated to both the boutique itself and also for the local community, allows them a glimpse inside the magic and intricate world of master watchmaking. 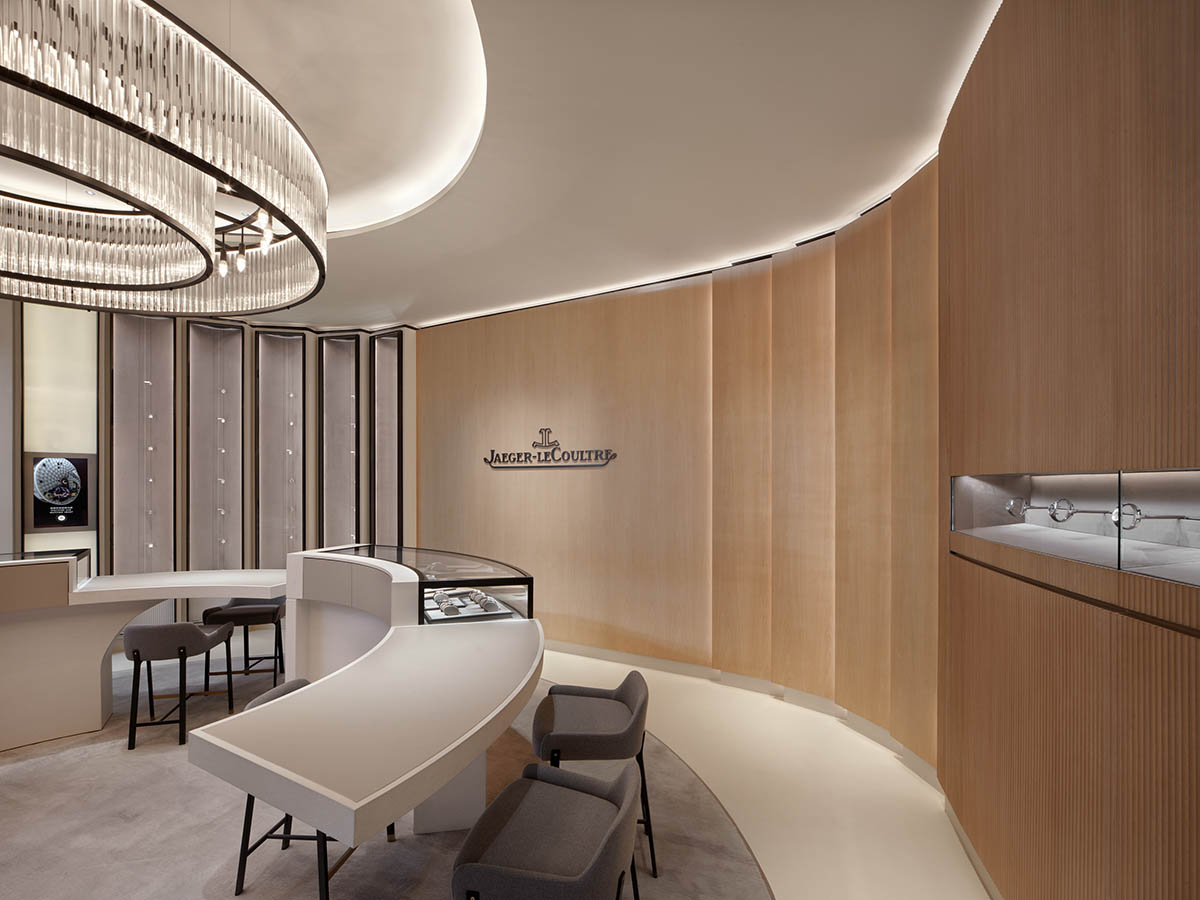 "Atelier de Antoines are only found in Jaeger-LeCoultre’s flagship stores," the studio continued. "It is a truly special and unique experience – inviting the customers into the very heart of the brand with the possibility to take part in classes and workshops to learn more about the impressive craft of watchmaking from the experts themselves."

"In homage to watchmaking, the layout space was conceived as a series of interconnected circles and curves, reminiscent of the components of a watch movement. For the interior and facade creation, Jaeger-LeCoultre needed a multidisciplinary team with a holistic and sensitive approach, being able to express the watchmaking spirit, heritage, and craftsmanship skills of the Manufacture, in other words, to convey the Maison’s DNA into architectural design," said a representative for Maison Jaeger-LeCoultre.

"The cooperation with Snøhetta led to the creation of a boutique concept based on the Maison’s balance between tradition and innovation, understatement and sophistication, home, and Manufacture," added the representative. 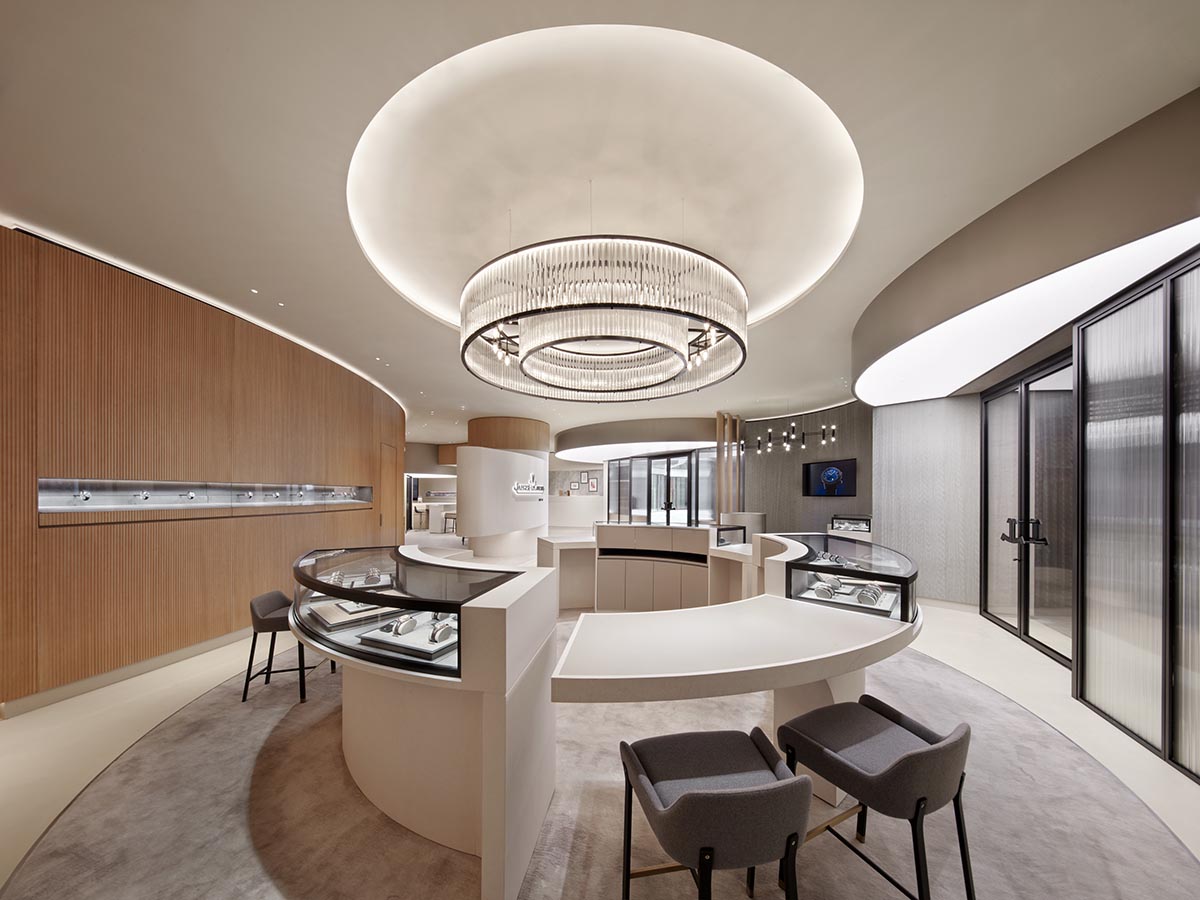 "The boutique path is taking visitors on a journey into Jaeger-LeCoultre’s heart, with an emphasis on organic materials and natural colors, evoking the serenity and beauty of the Manufacture’s home in the Vallée de Joux."

"Fusing tradition and technology, the boutique’s façade is a new expression of the Maison, made of glass shingles inspired by the tavaillon (wooden tile) cladding used on traditional Vallée de Joux buildings. More than just a boutique, the new Global Flagship boutique invites visitors to immerse themselves in the fascinating world of watchmaking and the remarkable story of Jaeger-LeCoultre," the representative continued. 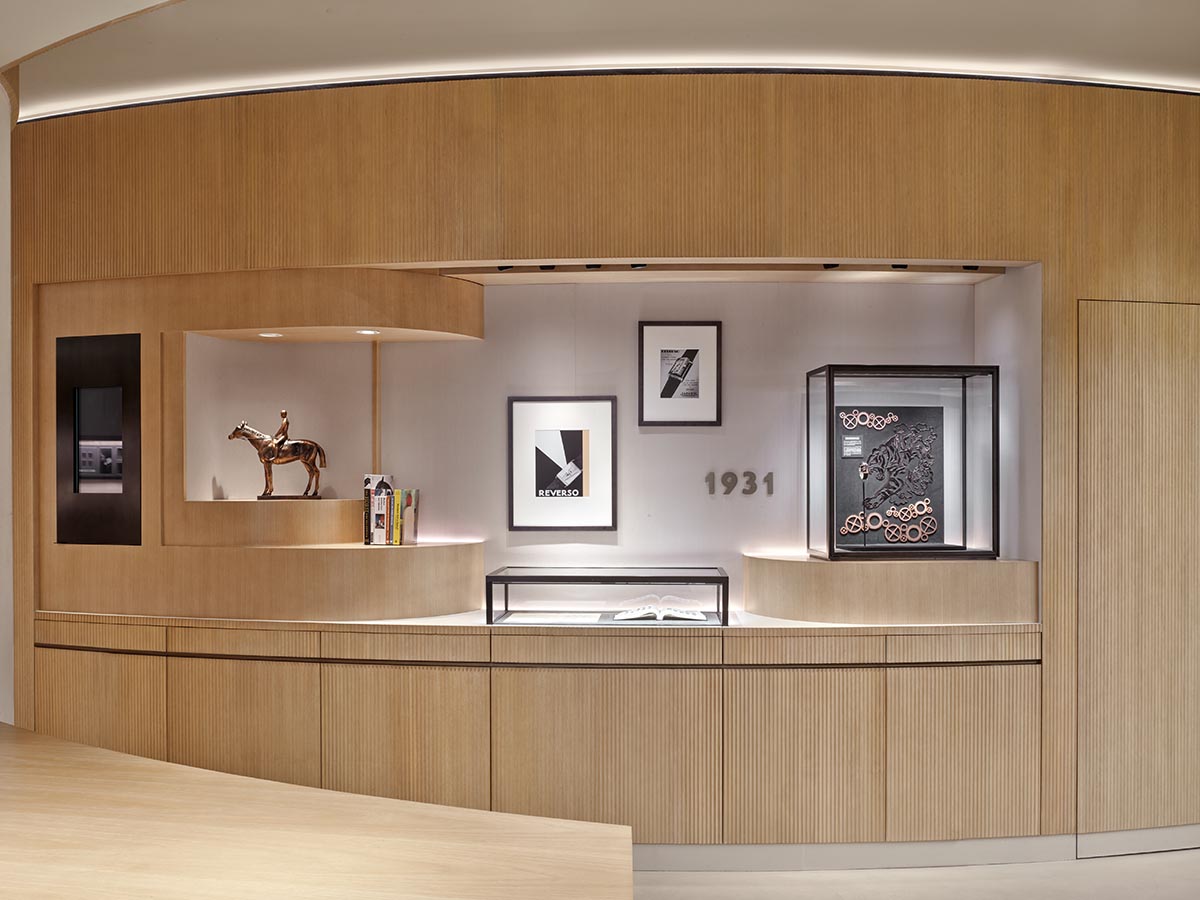 Another striking feature of design is its façade which makes the building perceivable.

Snøhetta has changed the perception of the store with a new and eye-catching element in the vibrant streets of Shanghai’s K11 district. The studio is inspired by "the balance between nature and the manmade" for the façade.

A series of modular glass bricks placed in various angles and hues make up the façade materials to naturally reflect both daylight and the enchanting Shanghai skyline. 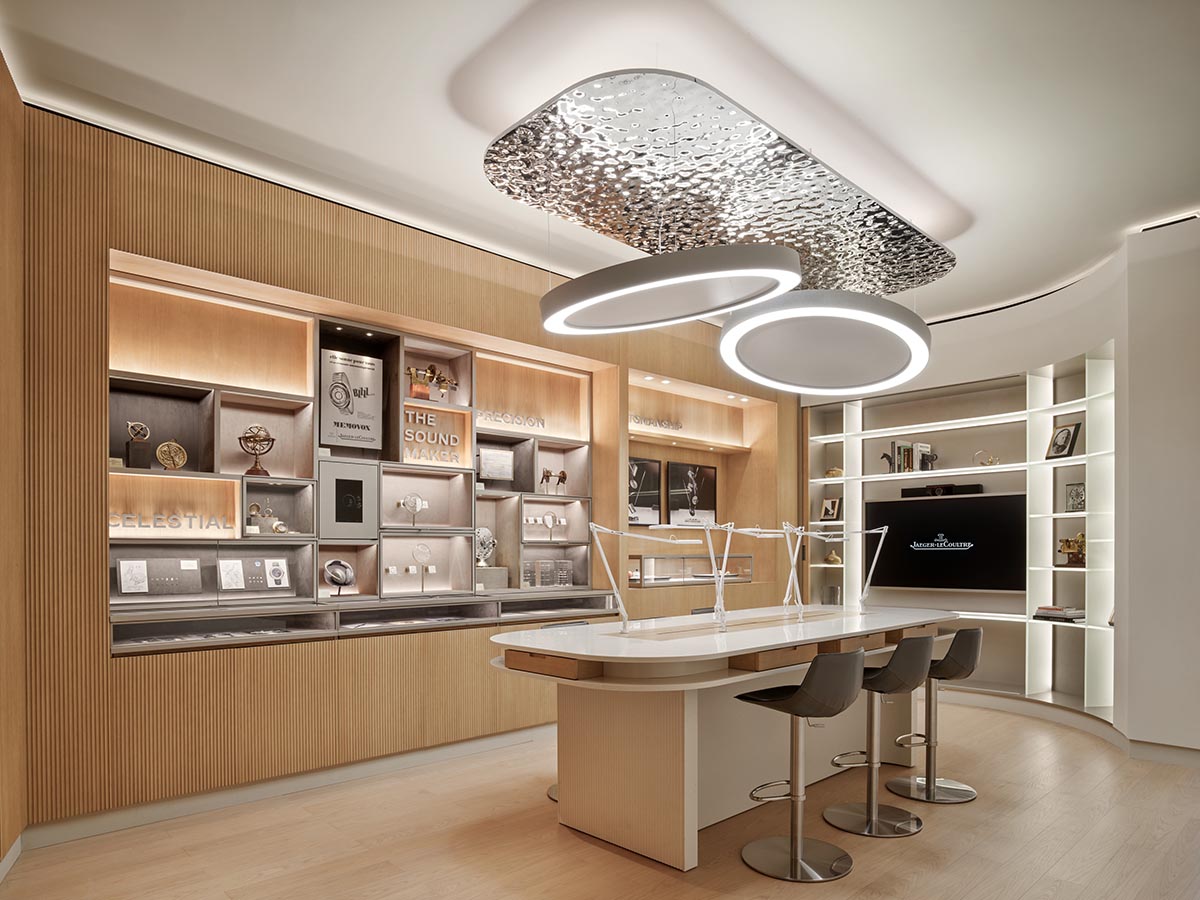 According to the studio, "the façade reflects the visions of Jaeger-LeCoultre and Snøhetta and the spirit of the city."

"As the natural light changes ever so slightly with the different seasons throughout the year, it makes the façade dynamic whilst at the same time recording the passing of time." 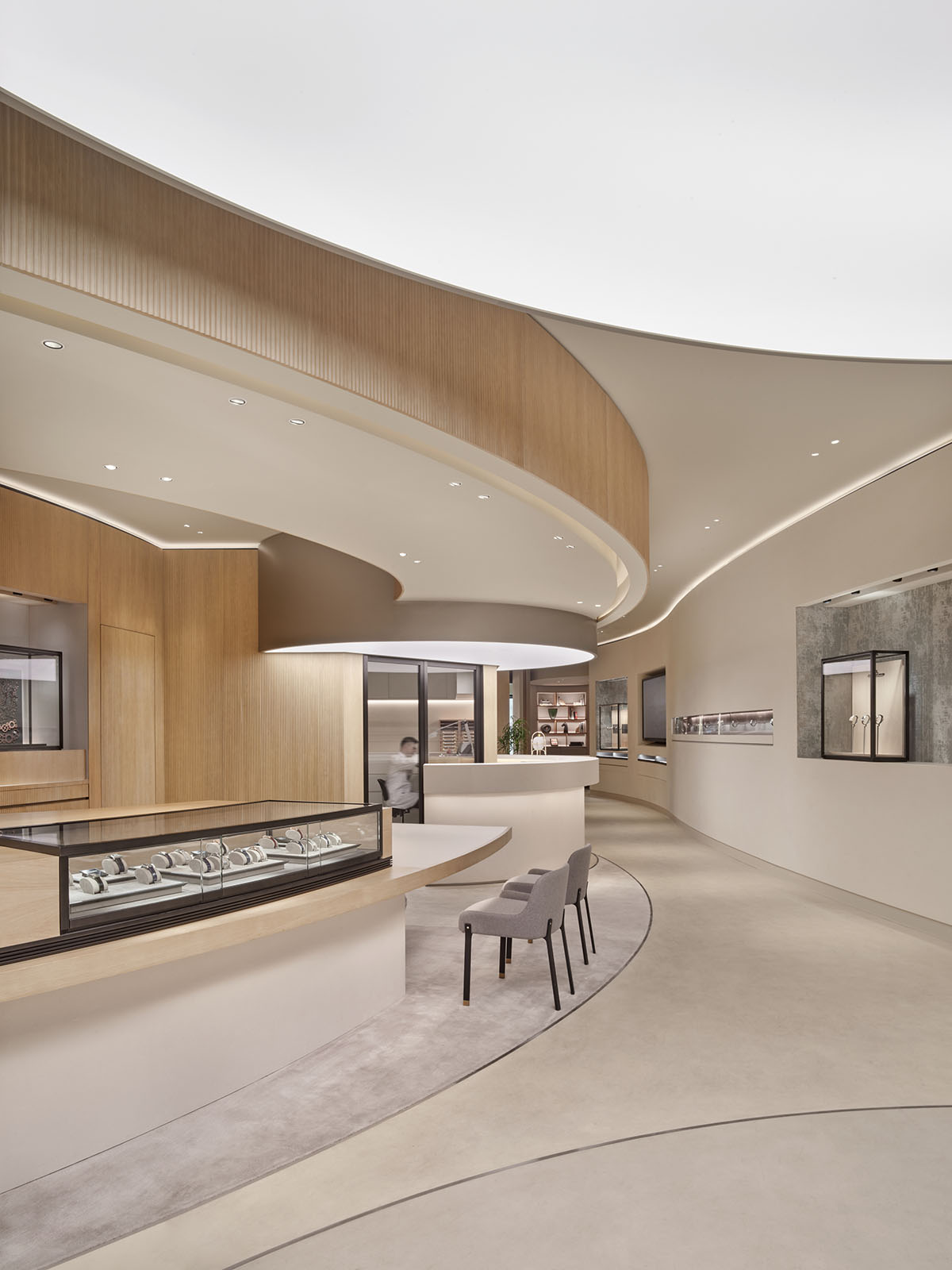 Through the programmed lighting facade, the façade amplifies the shadow play and helps create a truly special and unique atmosphere for local events, such as festivals and other happenings in the area.

"With origins from Switzerland, a land abound with mountains and glaciers, the new flagship boutique both embraces the essence of nature and also reflects Shanghai’s magical metropolitan skyline in perfectly balanced harmony," Snøhetta added. 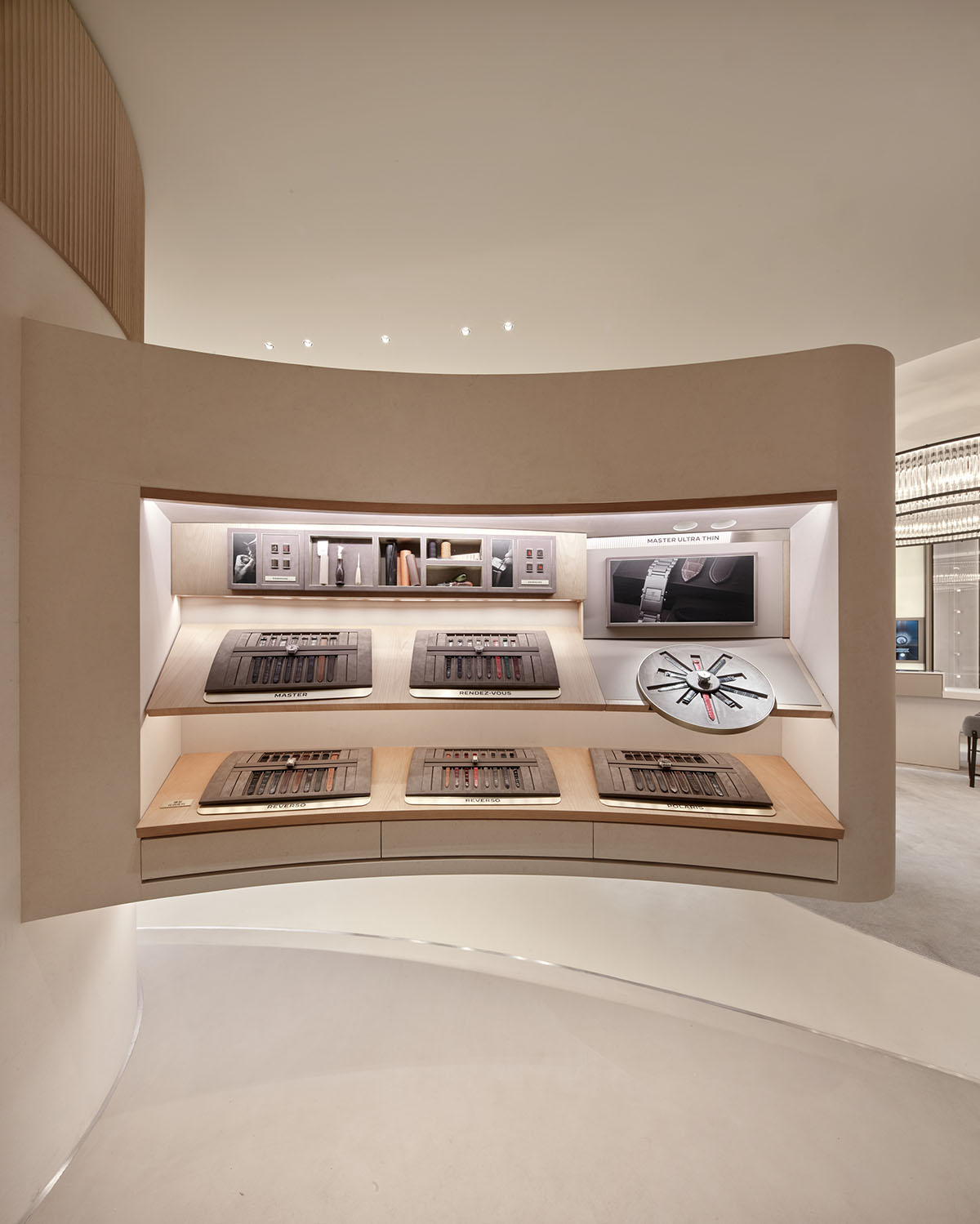 Snøhetta's portfolio includes other flagship stores, such as a new interior space for Aesop in Sydney, a new store for Aesop in Chelsea, London, Aesop Homansbyen in Oslo, Aesop Grabenstraße in Düsseldorf, Aesop Fasanenstraße in Berlin, Aesop ION in Singapore.

All images © Jaeger-LeCoultre, courtesy of Snøhetta.