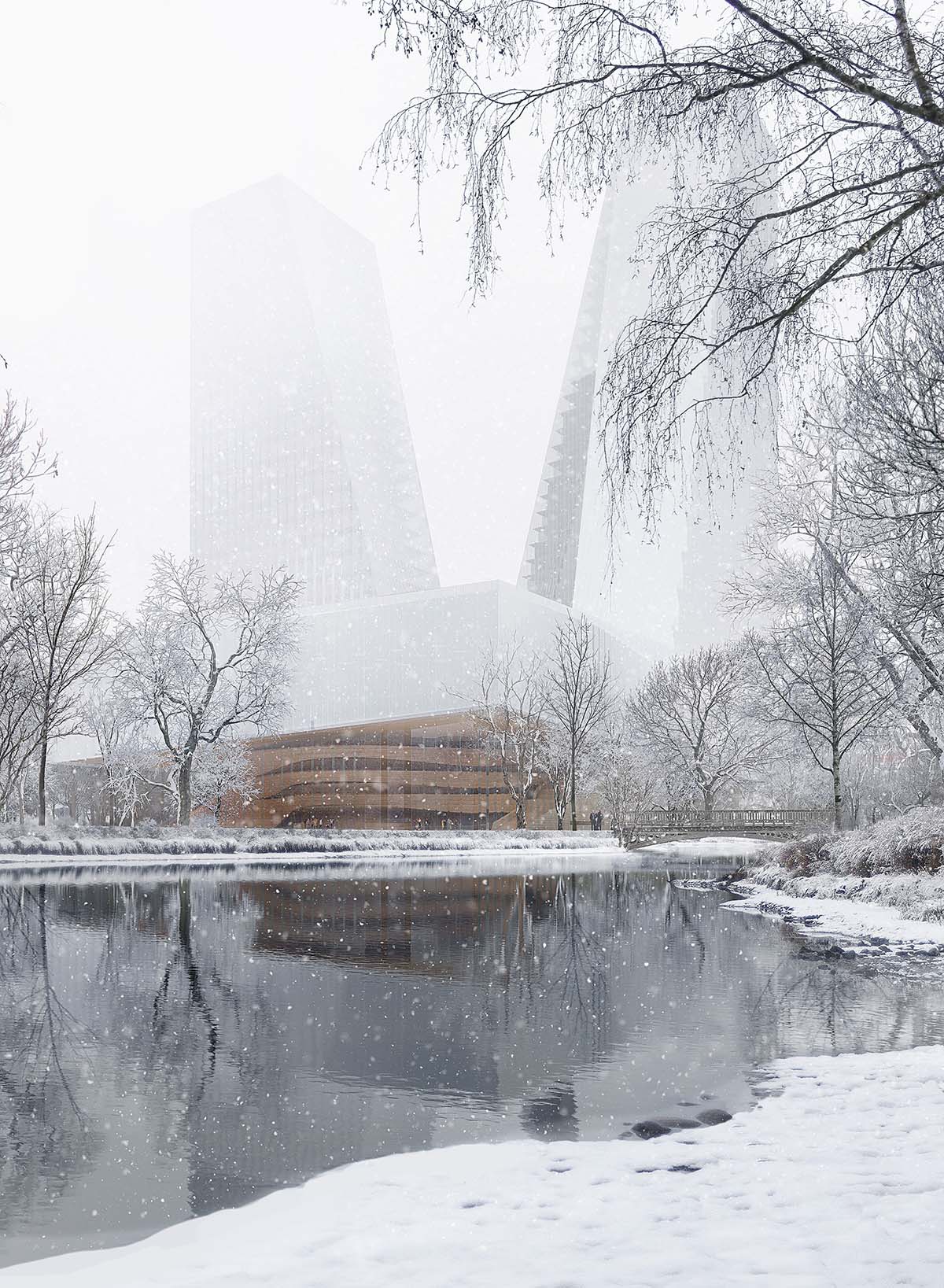 Dubbed Duett Düsseldorf, Snøhetta was commissioned by CENTRUM GROUP to propose a new opera house and cultural hub for the city. The new complex, offering a generous public roof garden, the building is aimed to be a world-class opera house by creating clear connections to the nearby Hofgarten park, the Rhein river and the popular Königsallee street.

Duett Düsseldorf will create a publicly accessible space that brings people together with its transparent base that exposes itself. 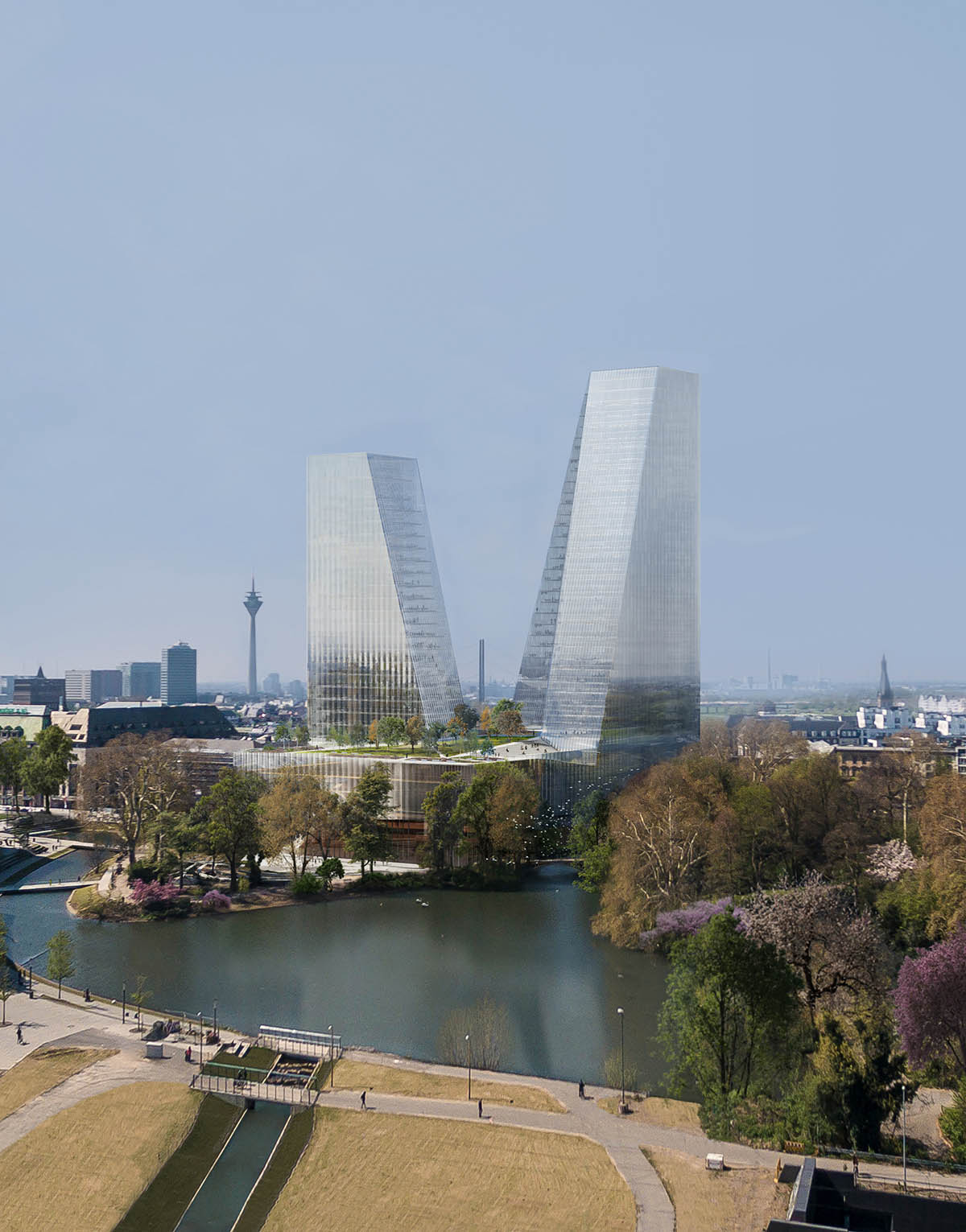 Replacing the existing one on Heinrich-Heine-Allee 16A, as the current floor plan is not suited to facilitate a well-functioning opera house at an international level, the new building will be a state-of-the-art opera house, including a hotel, restaurants and cafés, office spaces and residential units.

"The project aims to create a shared cultural epicenter for the people of Düsseldorf," said Snøhetta. 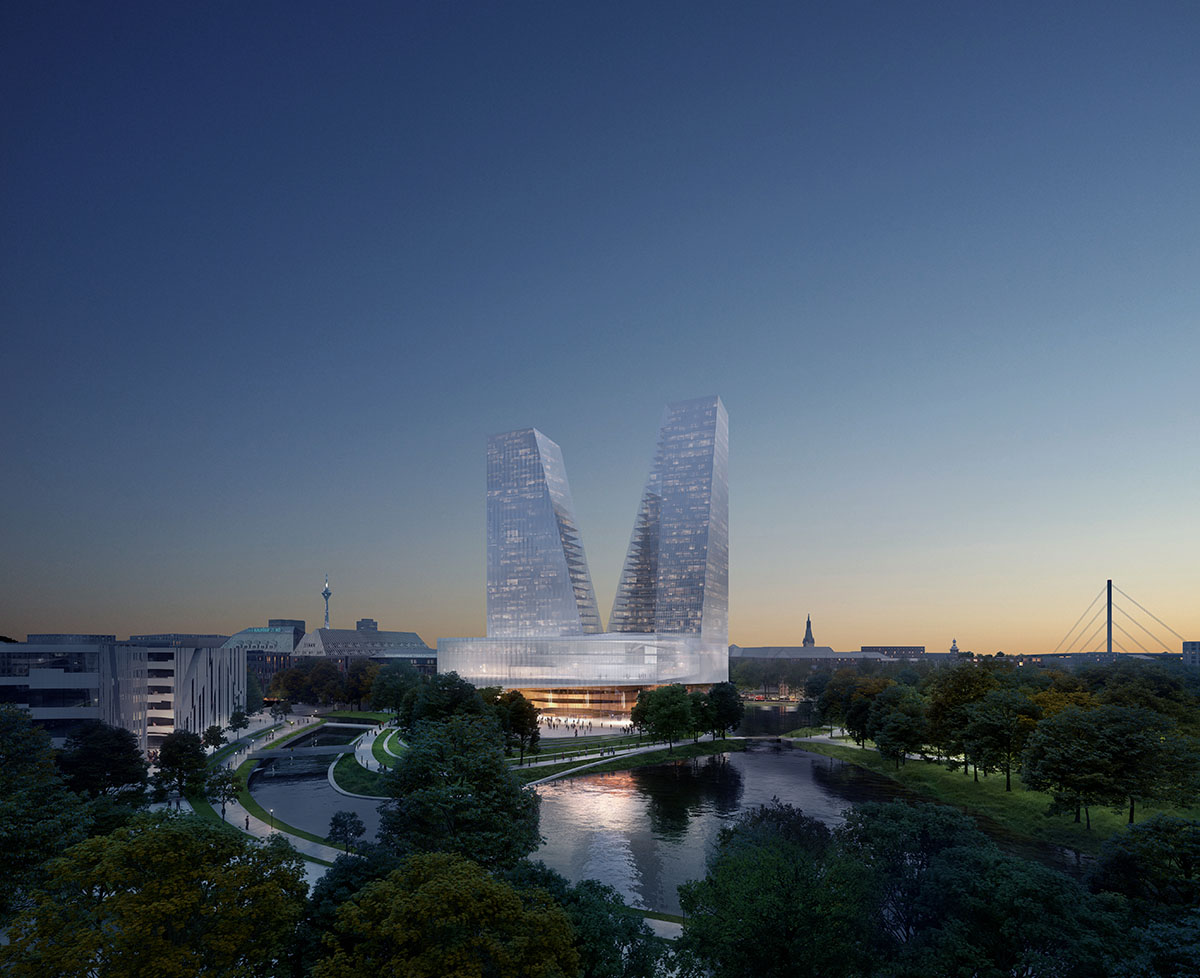 To minimize the footprint into the Hofgarten park, the studio designed a limited program and functions at ground level and moved functions to the higher-up floors.

"Bridging from the lush, historic Hofgarten park, the landscape design surrounding the opera house is developed with focus on the flow of people through an urban forest leading to the opera house’s foyer," said Snøhetta.

"The curved landscape reorganizes the road systems and strengthens the connection to Königsallee through a new bridge in the south and a connection to the West." 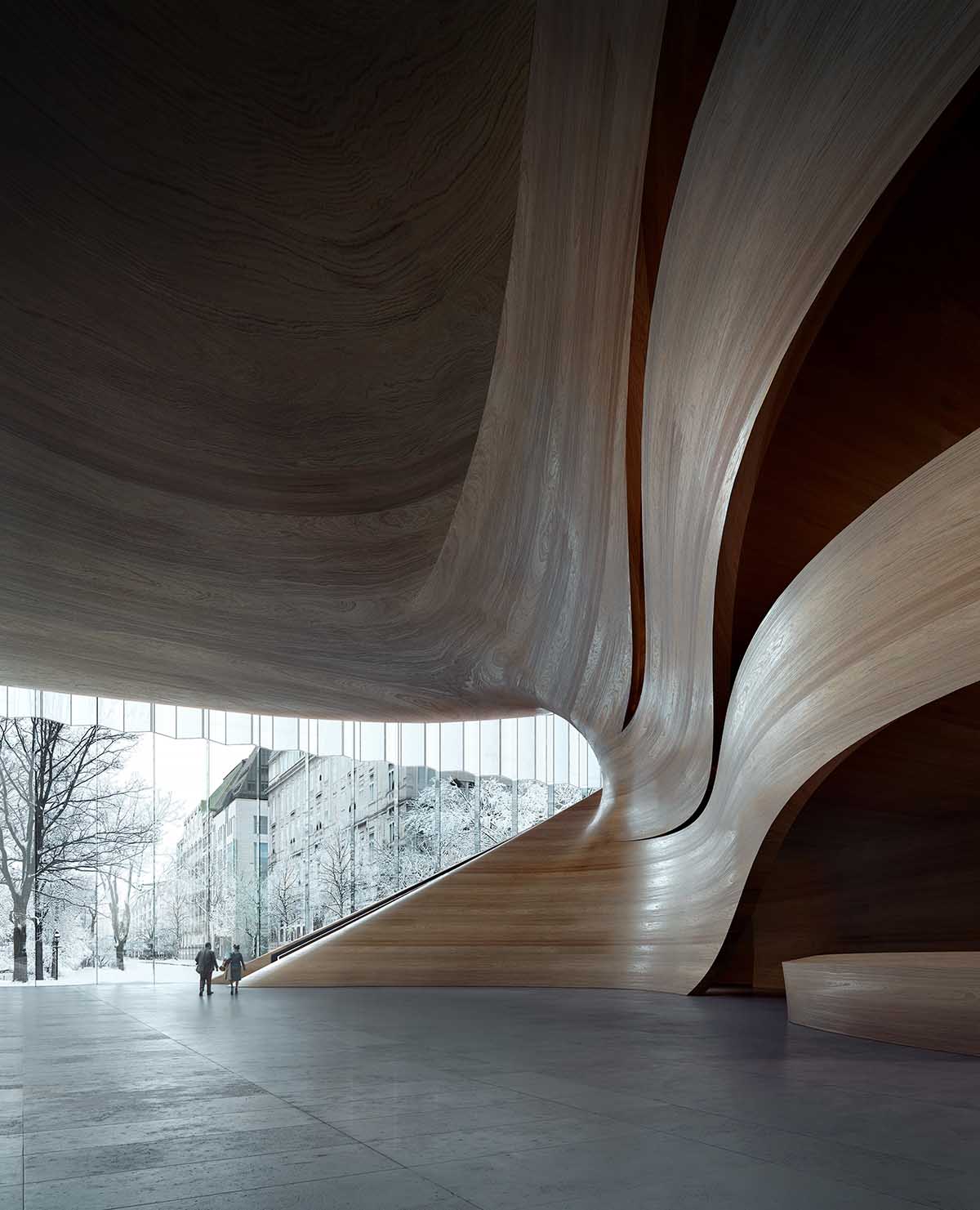 Walking on the clearly defined carpet of granite stone, the architects designed a 16-meter-tall transparent glass façade that reveals a sculptural wood wall within the foyer.

With overhanging balconies stretching out from the circular core, the organically shaped wall creates a spatial phenomenon transitioning from a vertical wall to a horizontal sky.

From the forest-like entrance from the park, through the transparent glass shell, the meeting with the wooden core creates an intimate, warm and comforting welcome to the opera house.

The studio created generous staircases and ramps leading from the foyer up to a café on the fourth floor of the building – the first of three floors in a horizontal cantilevering volume topping off the foyer and main stage below. "From the North-Western part of this horizontal level, visitors can get a first glimpse of the magnificent views of the surrounding area," as the architects emphasized.

From the café, visitors can see into the rehearsal spaces of the opera, including the choir and orchestra rehearsal rooms. The large ballet rehearsal space on the Eastern side of the horizontal volume is extended over two floors, ensuring good light conditions and a great sense of space, while also giving a sense of security and privacy by being placed on the higher floors. When appropriate, the rehearsal spaces can be opened up to the audience for performances. 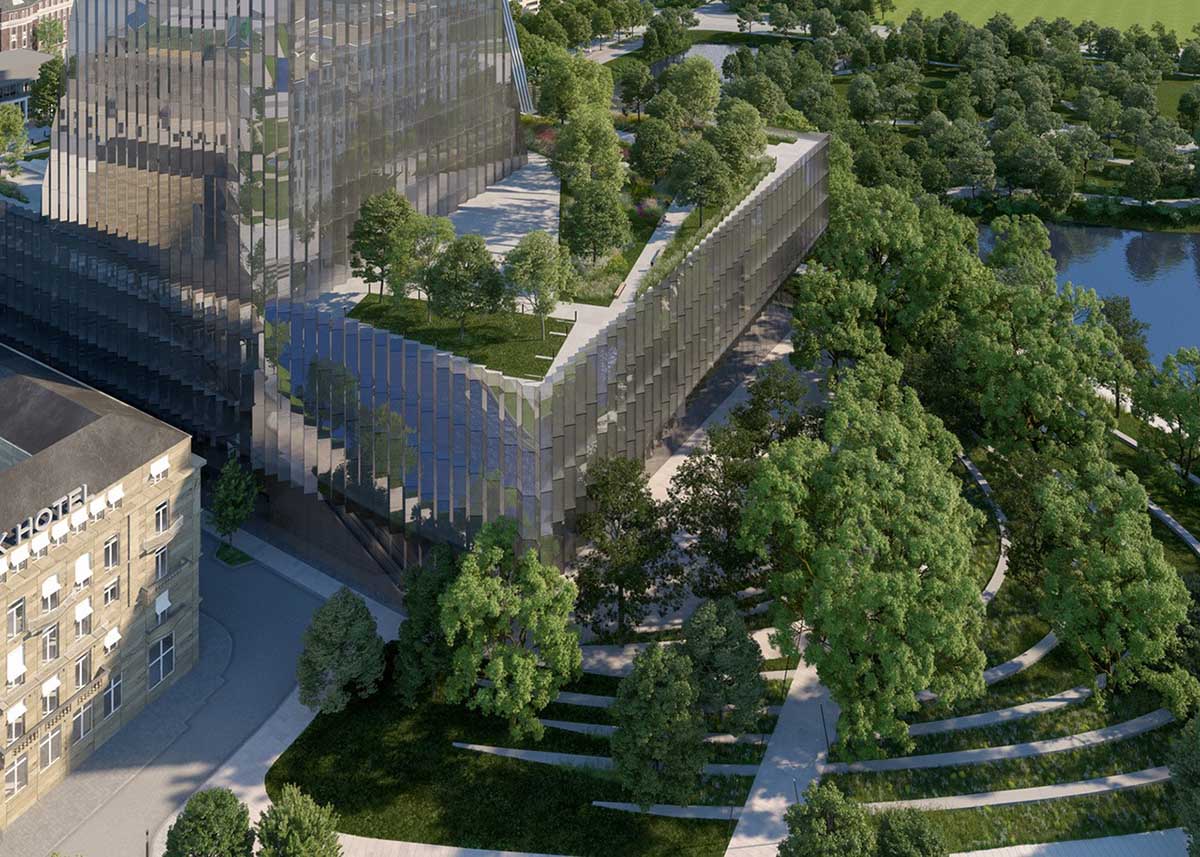 The opera house and hotel functions will cover a total of 25,000 square meters, with publicly accessible areas, while the horizontal volume representing a significant architectural element.

"Aimed to build relationships and synergies between inhabitants, visitors, guests, employees and artists, it is also an element binding together the park, the Rhine and the sky," the studio added.

On the top of the horizontal volume, there is a publicly accessible roof landscape that offers breathtaking views of the city and park. Directly accessible from the foyer with an escalator, the 6,000-square-metre public roof landscape appears as a green courtyard with an attractive 360-degree view. Designed for flexibility and multifunctional use, the roofscape is ideal for cultural events, performances and other activities. Other commercial functions such as restaurants and cafes are connected to the three horizontal levels, creating an appealing public attraction in the city.

As Snøhetta explained, the project offers "an unmistakable V-shaped silhouette reaching up towards the sky" from the horizontal levels.

"The ensemble of towers changes its silhouette from each new perspective, creating a constantly changing expression reminiscent of a dancing duet."

The studio placed the towers strategically to reduce shading of surrounding areas of the park and neighborhood, while also creating better daylight conditions in the courtyard.

The towers are programmed primarily for the hotel, residential areas and office spaces. In the project, the studio has focused on creating clear divisions between the functions and providing protection from changing weather conditions, while also ensuring a visual connection and uniform appearance of the building. 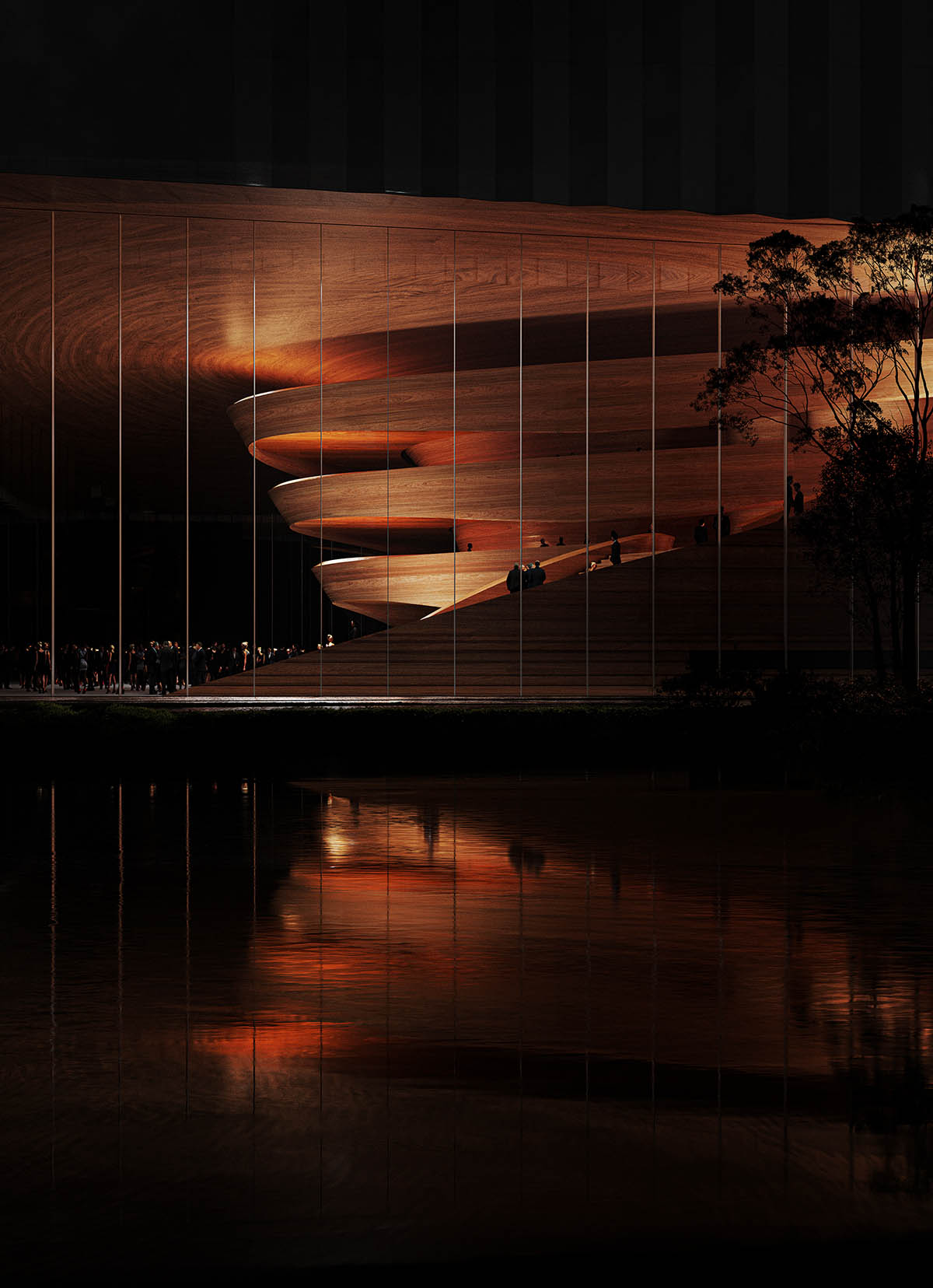 "This is enabled through a layered glass façade with different scaling and transparency. Contrasting an opaquer outward-facing tower façade, the inward-facing façades are mostly self-shaded and therefore allow for a high level of transparency and interaction with the public on the roofscape," the studio continued.

The multilayered Duett Düsseldorf is set to create a cultural meeting space and public attraction, further building on Düsseldorf’s standing as a hub for arts and culture.

Snøhetta was founded in 1989 by Kjetil Trædal Thorsen, Christoph Kapeller and Craig Edward Dykers. Having more than 30-years experience, Snøhetta has designed some of the world’s most notable public and cultural projects, including the Oslo Opera House, the National September 11 Memorial Museum in New York.