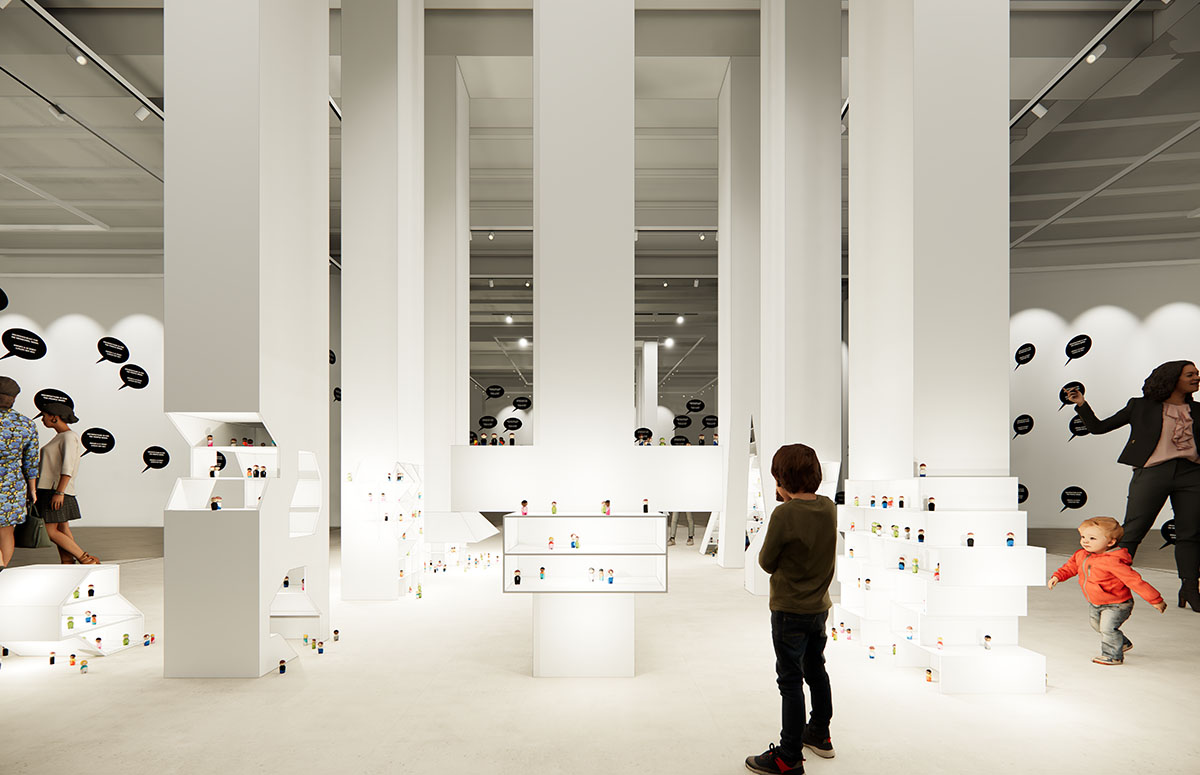 German architect Matthias Hollwich and his New York-based firm HWKN have been dedicated to pioneering projects for over a decade, earning them a rank in Fast Company’s world’s Top 10 Most Innovative Architects.

Most recently, Hollwich provoked with his publication New Aging: Live Smarter Now to Live Better Forever by turning stereotypical outdated building typologies “upside down” to make aging a graceful and fulfilling aspect of our lives through designed spaces.

HWKN combines American ambition with German precision, offering possibilities for a future-oriented built environment – with a special commitment to use architectural form to put people in the focus and promoting social interaction. 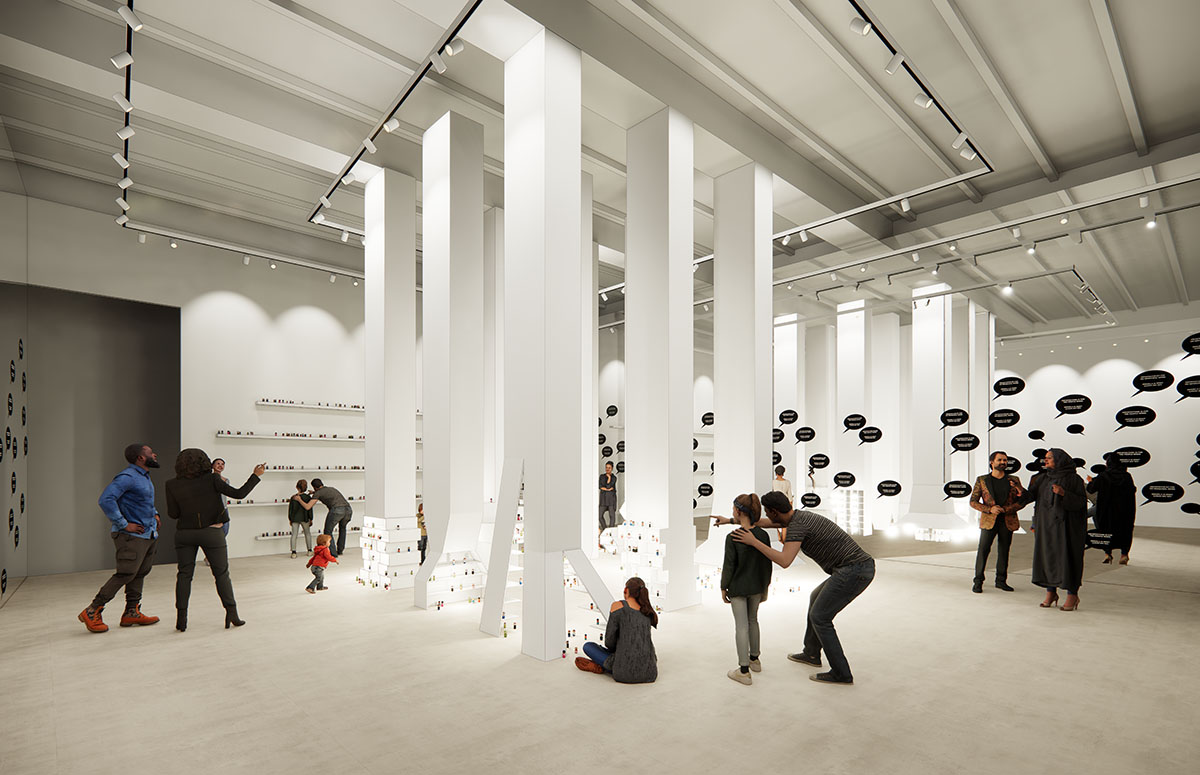 The diverse and wide-ranging portfolio includes various new neighbourhoods and buildings – from retail spaces, pop-up installations to residential and commercial schemes in the USA, the Middle East as well as in Germany, where inspiring office buildings are currently being realised in Munich and Bochum.

The exhibition, titled Shape Tomorrow: Towards a Future-Oriented Built Environment, at Aedes Architecture Forum presents the innovative design strategies through selected projects and tells stories in a playful interactive installation about how HWKN's architecture aims to shape a better tomorrow. 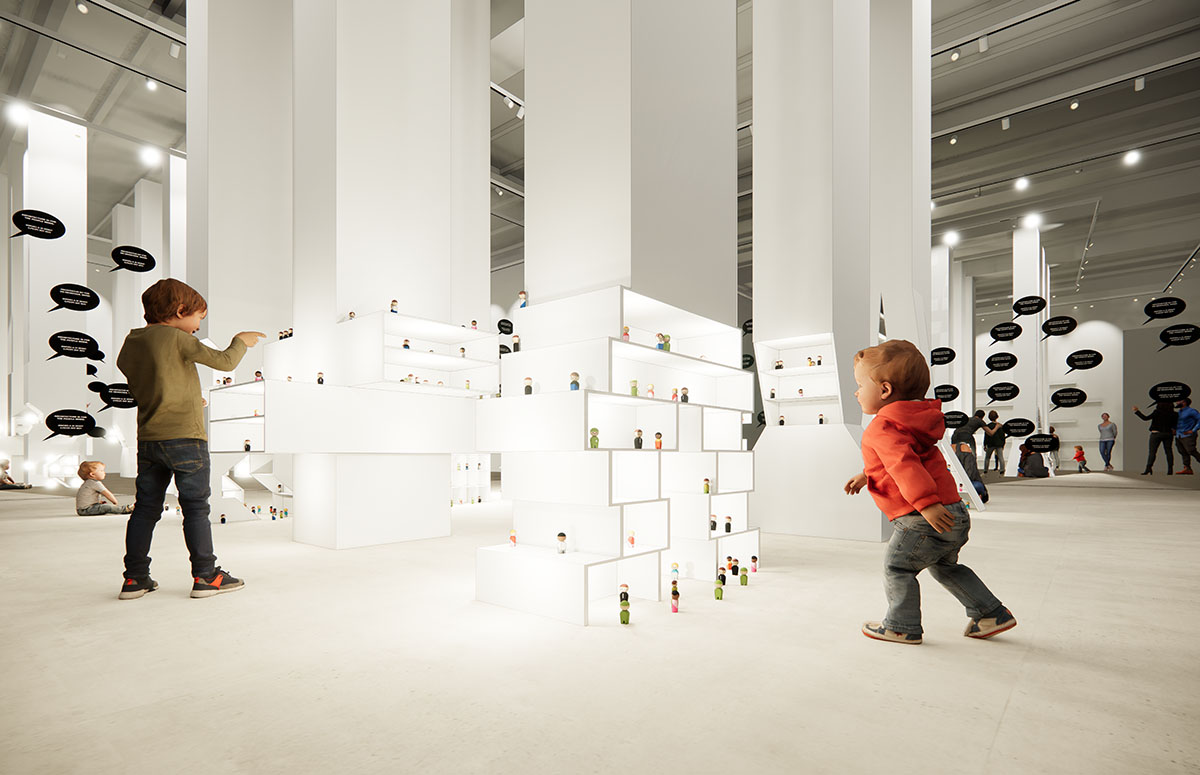 Shape Tomorrow exhibition stems from HWKN’s past explorations and their response to the Covid-19 pandemic. "We knew we had to turn this crisis into an opportunity," argues Hollwich.

"Having seen how mutable society is, we recognised this as a rare moment for architecture, one where we could develop buildings that adapt to people's needs, desires, societal demands and technological functions.”

In its numerous international projects, HWKN is determined to create change with design that enhances emotions and strengthens the life force of the public realm, in addition to traditional goals such as rational organisation and efficiency. 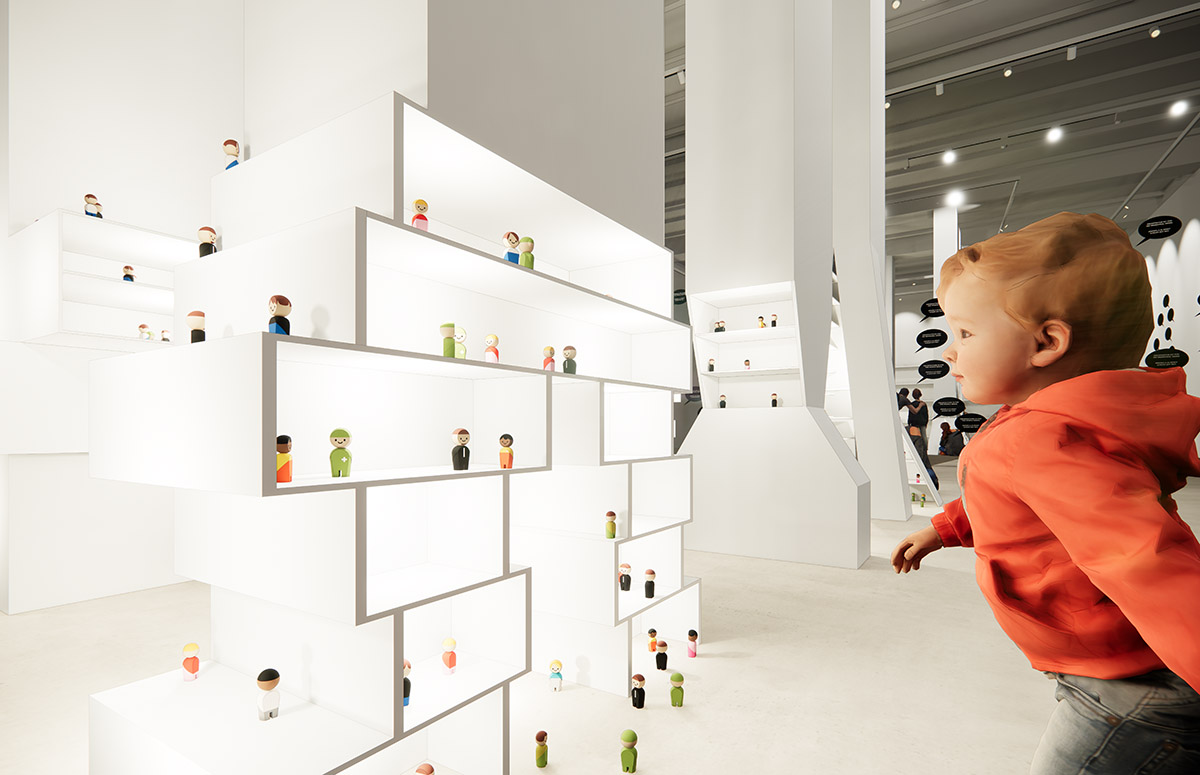 Matthias Hollwich and his team are not only concerned with the architectural potentials at the interface between inside and outside, but also with the transformation of vertical orientation in architecture. “Usually, the focus is on the top of a building, its facade and efficient organisation, which are to be viewed from afar.

Further, this organising rationale usually reserves the base for entry, retail, and parking,” explains Hollwich. In cooperation with open-minded developers, HWKN turns these design principles upside down, by integrating identities and unique characteristics with each structure.

Hollwich says, "We shape the base of the building, and focus on people’s activities, emotions, and memories, while adding interiors with personality. For us, the interface with people is the focus: creating places, which generate inspiration for everyone. The identity of the new building directly coincides with the experience on the street." 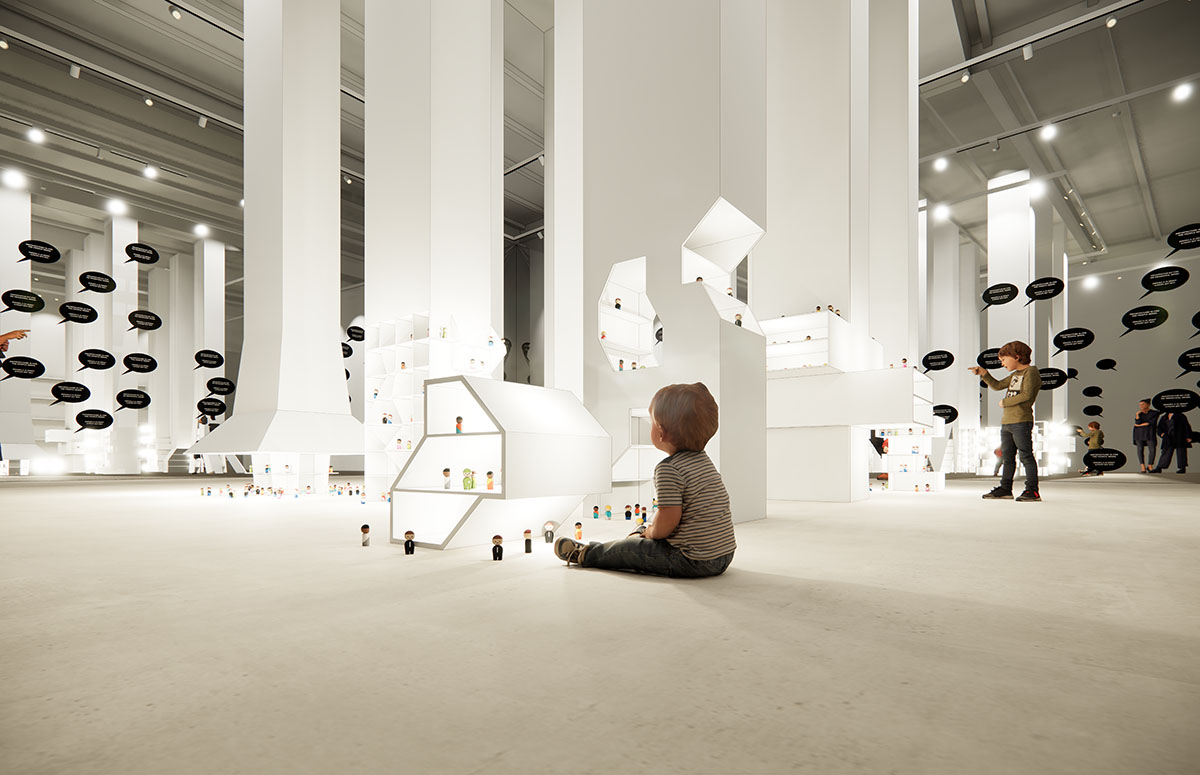 The exhibition at Aedes highlights HWKN's design approach, exploring interaction between people and buildings. Nine five-metre-high towers installed in the exhibition space symbolise the diverse formal as well as programmatic approaches of their projects, such as the realised office building 25 Kent in New York as well as Die Macherei in Munich and Spirit Bochum, two commercial quarters currently under construction. 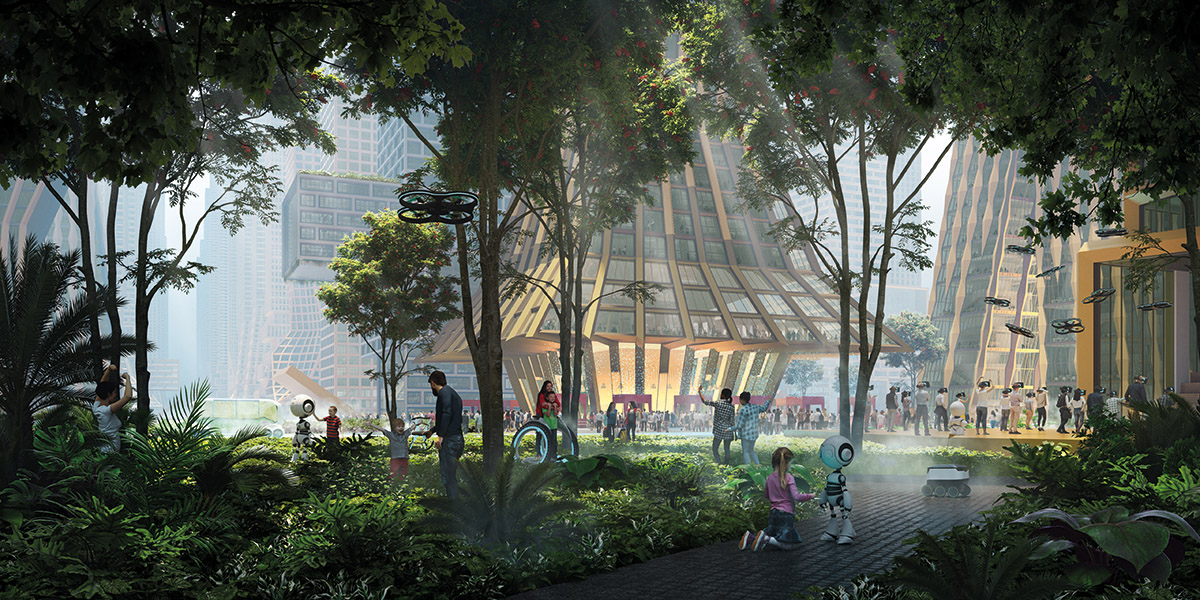 The towers' placement is designed to encourage visitors not simply to look, but to explore, react and respond in a playful manner. Each building has a name, giving it identity, turning it into 'someone' you want to meet.

This can be seen in Blake, the extroverted building with an open market surrounding its base, or the nurturing tower Skyler, that brings together multiple generations in one place.

Visitors of the exhibition are invited to choose a character from a selection of toy figures and imagine this character to live, work or play in the building they choose. 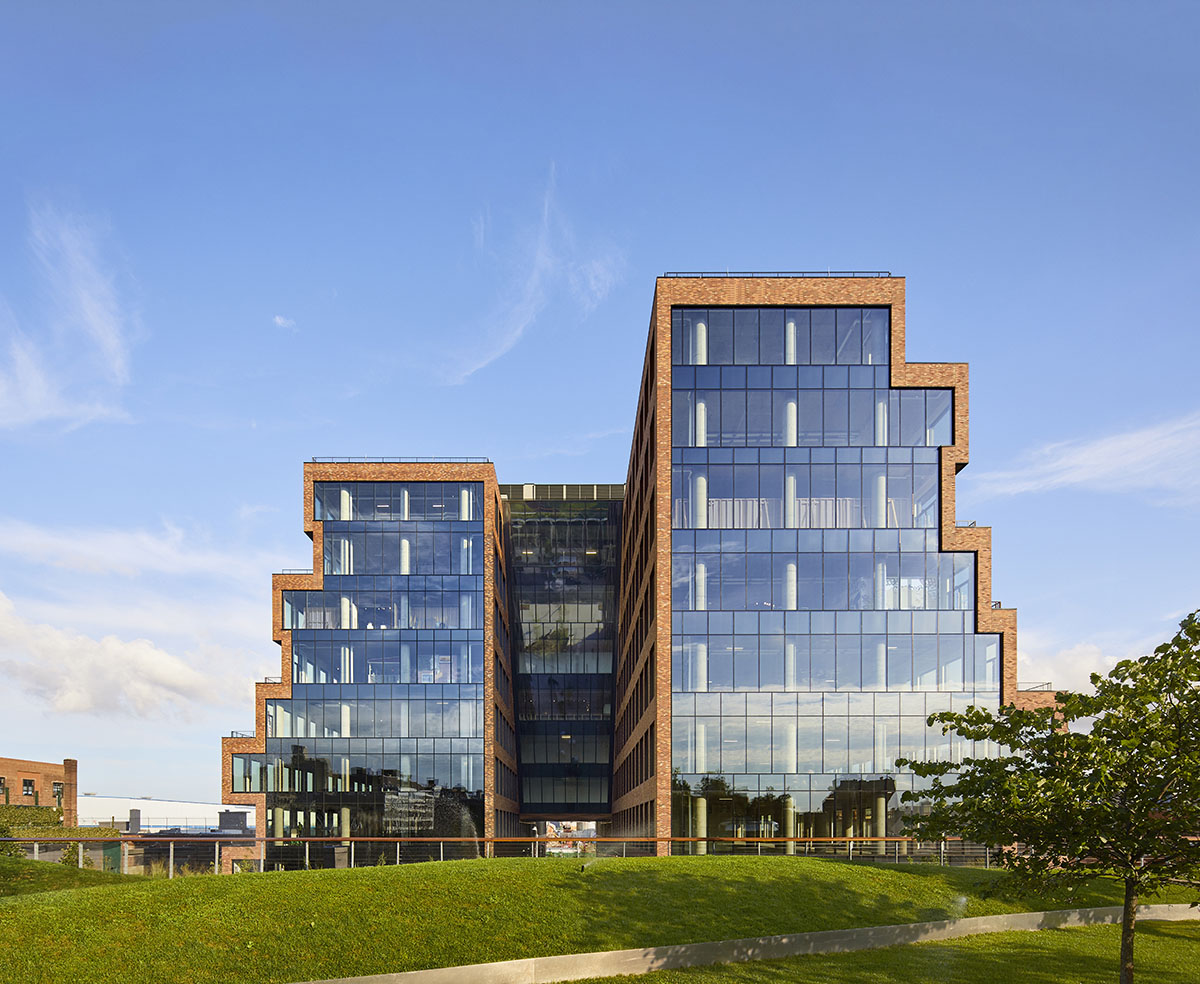 They can use their phones to take pictures and document thoughts. These individual inspirations about better ways to live, work, play and build will be collected and published at the end of the exhibition and analysed to contribute to HWKN's research and development of new ideas. This provocative concept underlines the idea of using an exhibition as a research tool, but also reflects an unusually engaging and culturally diverse approach to implementing it.

HWKN is an award-winning global architectural firm led by Matthias Hollwich. HWKN was founded in 2008 and based in New York City, its projects range from a striking new building addition that welcomes all to the Jerusalem Academy of Music and Dance and to the Pennovation Center at the University of Pennsylvania, designed to be a tech incubator.