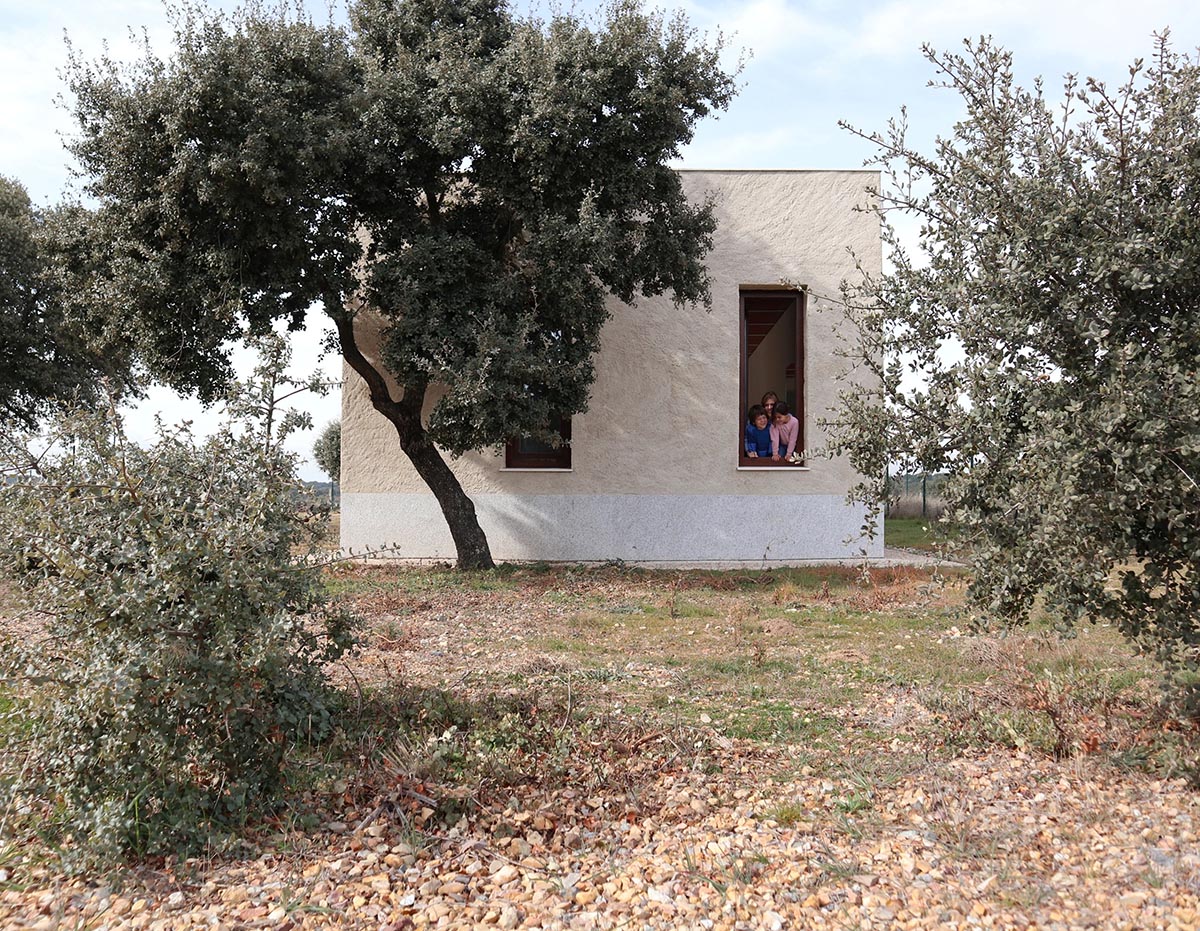 Named El Refugio (or The Cabin Home), the 100-square-metre minimalist single-family cabin is located in the natural environs of Cuatro Calzadas (Buenavista, Salamanca, Spain), in an area encompassing 84 inhabitants with reasonable budgets.

"El Refugio" was conceived in response to new lifestyle trends and alternative housing as a project increasingly in demand. The project has been adapted to the new context of a new generation of inhabitants in society today, in which people are seeking simpler, more realistic alternatives to living in mortgage-laden micro-spaces (common in Spanish cities) in a big metropolis, surrounded by concrete and controversial gentrification. The goal was to create an elegant, efficient, trendy, and contemporary home adorned in noble materials, while at the same time ensuring that it is sustainable, budget-conscious, and surrounded by unlimited green space and nature.

El Refugio "offers refuge" to a new generation of globally and digitally interconnected citizens of the world who are open to new ways of life. For many, the program removes existing barriers to accessing nice homes. 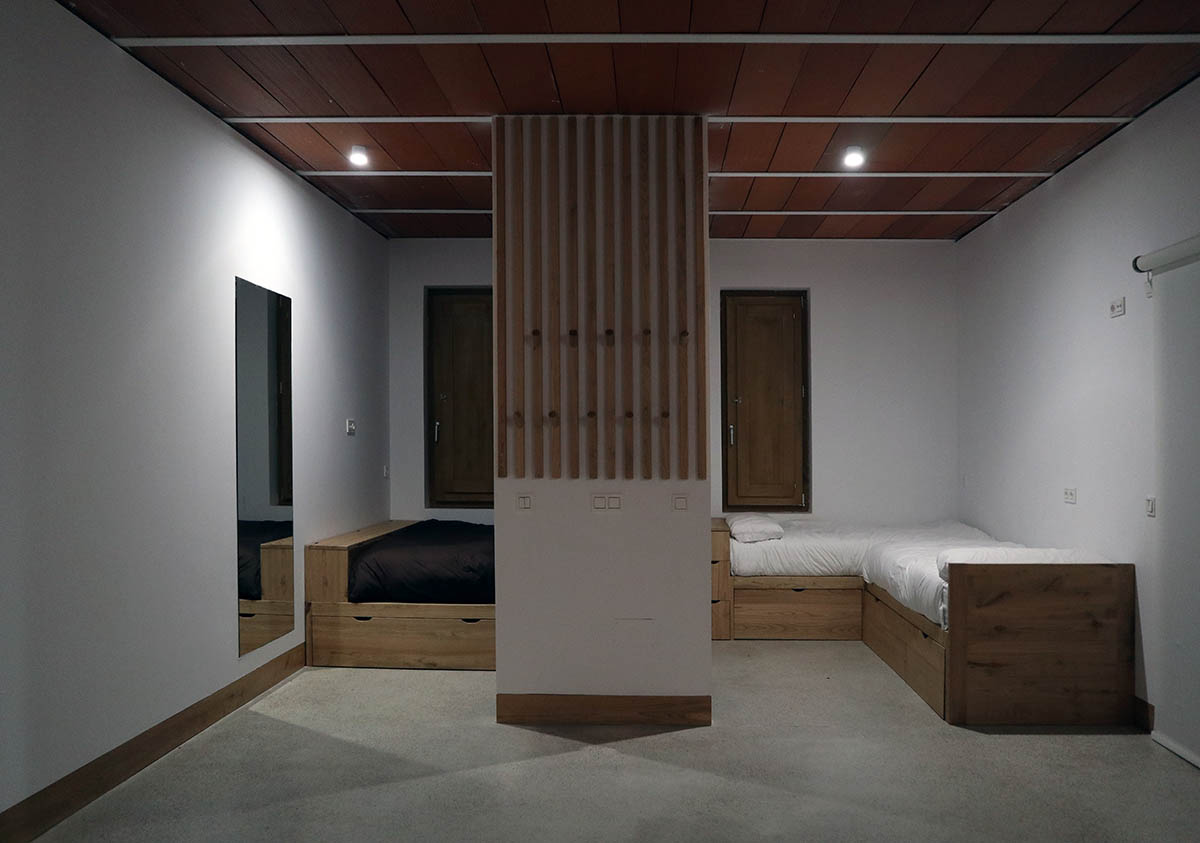 The architect and his vision: Young architect Álvaro Sánchez de Miguel, born in Salamanca in 1979, is nationally and internationally accredited by the Colleges of Architects of "Castilla y León" and, together with his team, is a recent recipient of prestigious international awards, including the Architecture Masterprize 2021 in the category of small architecture. Over the last decade, Álvaro Sánchez de Miguel has witnessed the evolution of architecture in respect the needs and social context of inhabitants, and has assumed a sense of responsibility for providing solutions to the urban, economic, and social upheaval brought about by the bursting of the Spanish real estate bubble in the late 2000s, followed by the economic crisis that began in 2008.

His work addresses the social consciousness of a new generation in pursuit of alternative ways of life that are more respectful of the environment, more sustainable, better aligned with nature and the planet, and more humane, humble and consistent with their quest for greater freedom and endless possibilities.

Accordingly, in this project, he proposes a simple yet versatile way of life, where we can work, rest, and play. A warm environment where "fiestas" can be celebrated on Sundays with the family (a tradition rooted in Spanish culture), or a change of scenery for early retirement. It is also ideal for those seeking a second rural home (in the second most visited country in the world), or as a space adaptable to audiovisual, cultural, or tourism uses. It can also be an ideal weekend retreat with the children. 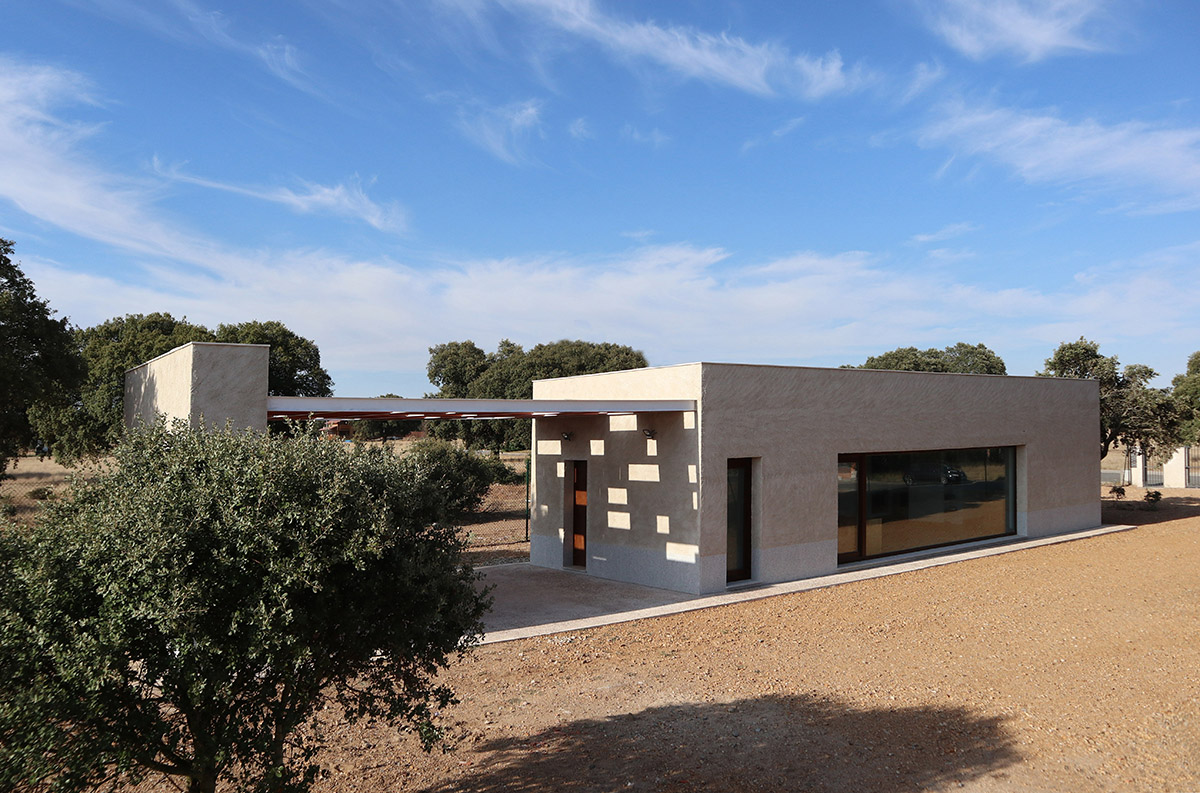 It is also a project that remembers the "España vacía" (empty Spain), an urban-social phenomenon that took place in the mid 20th century in a country weakened by civil war. 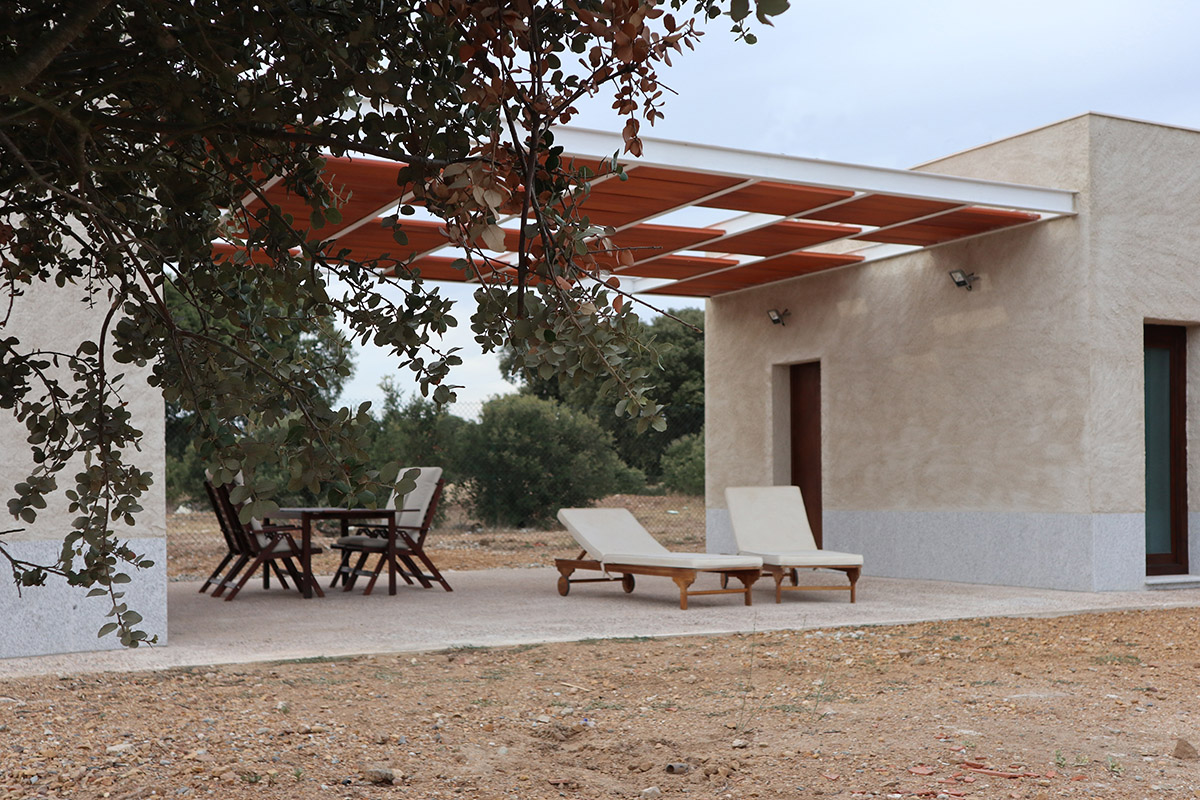 The plot has a flat topography at an altitude of over 1,000 metres above sea level. El Refugio is located in a natural landscape, just 20 kilometres away from the internationally-renowned "Plaza Mayor", in the historic heart of one of the most visited cities in Spain. Salamanca is situated in the Autonomous Community of Castilla y León, both renowned for their history, tradition, gastronomy, culture, architecture, and abundance of students from a new generation, all just 1 1/2 hours from the capital city of Madrid. 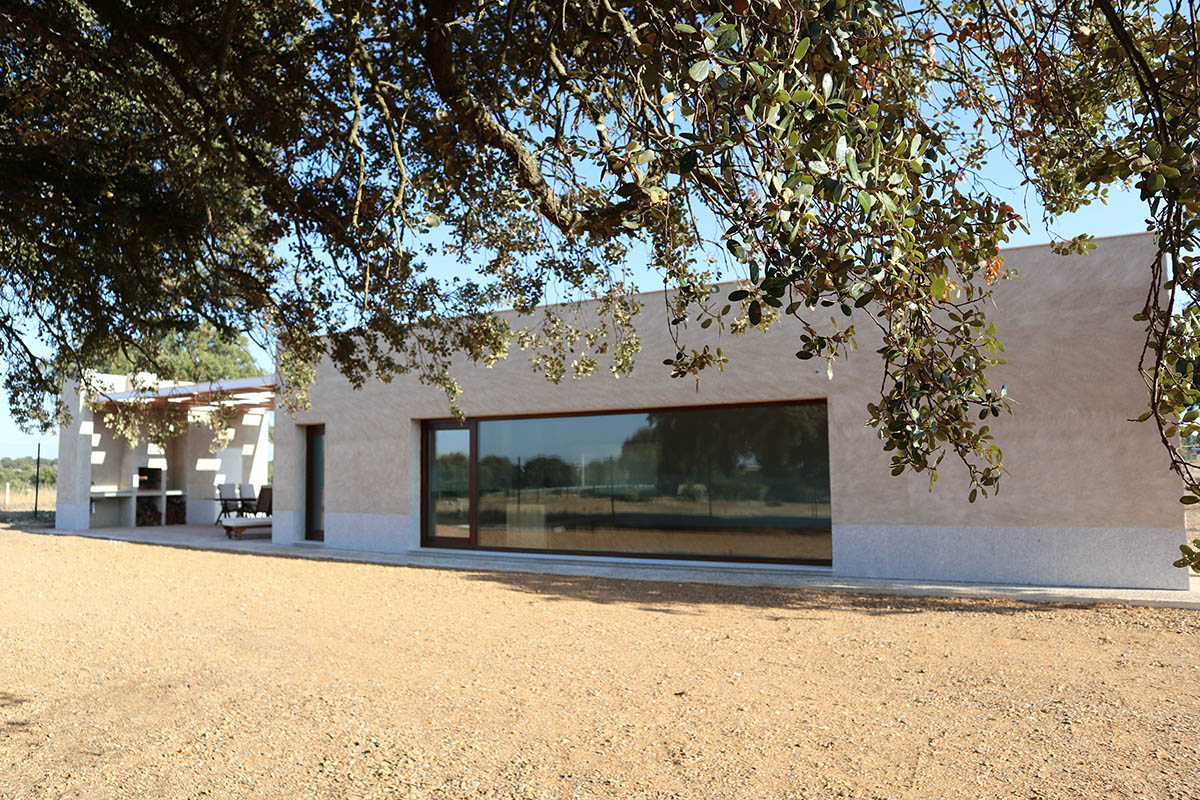 El Refugio features a rotund geometry that emulates the scale and nature of the Castilian Plateau, and is divided into two spaces; the construction is integrated into the environment and respects the existing vegetation, preserving the land in its natural state and using local aggregate for its final finish. It is located on a plot surrounded by oaks, and the house serves as a visual tribute to the beautiful trees which inspired the project from the onset. Built in close proximity to the oaks, the project lends credence to the fact that today´s architecture can be built into the environment without destroying it, and that we must stop and rethink the way we design and build new projects. 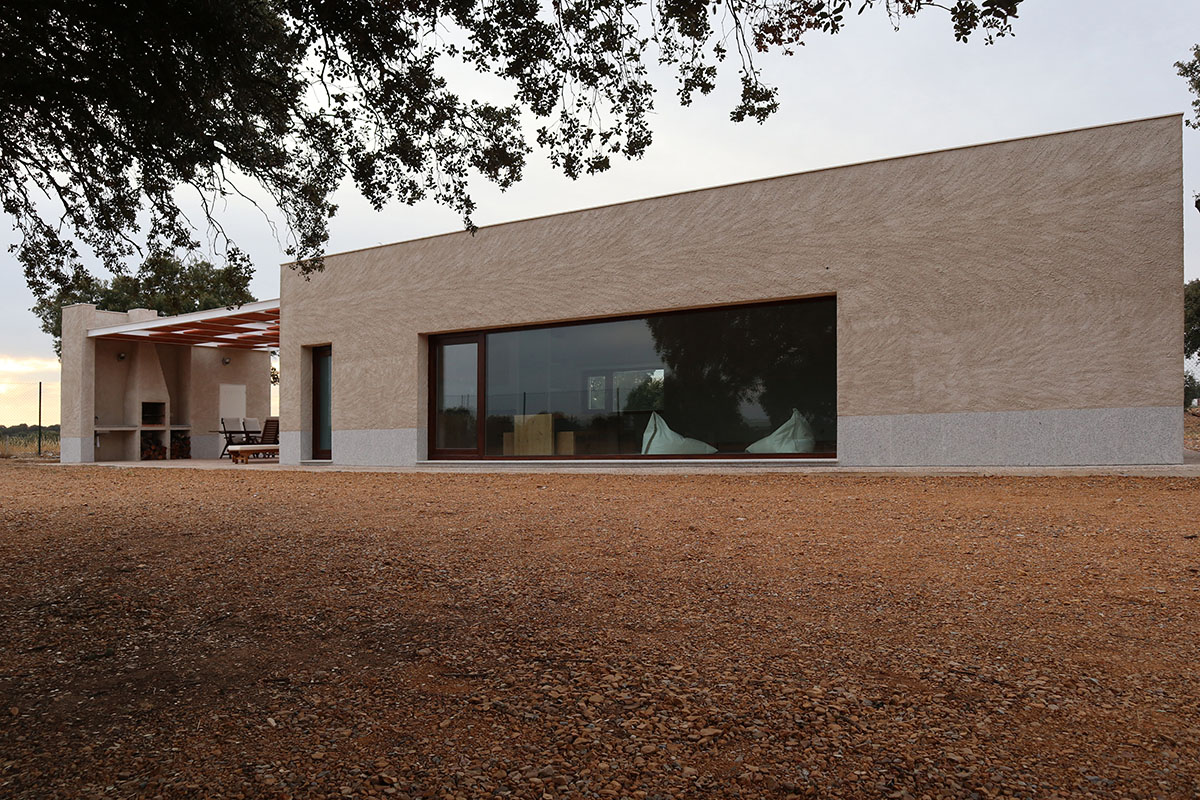 Access to the building has been strategically designed via a natural, unpaved lateral path that reaches the entrance to the building on the east façade, and through the blind load-bearing wall situated on the north façade. The porch area is marked by an abundance of latticework, in a semi-protected area from which the building is accessed, allowing for privacy not visible from the main entrance to the plot, even with its entrance door open.

Once inside, the architect invites us into an apparently reduced space at the entrance, but which surprises upon passage through the first steps of the entrance hall. An open-plan awaits, free of partitions or doors, and which, as if it were a museum hall, offers panoramic views of the natural treasures that surround it. 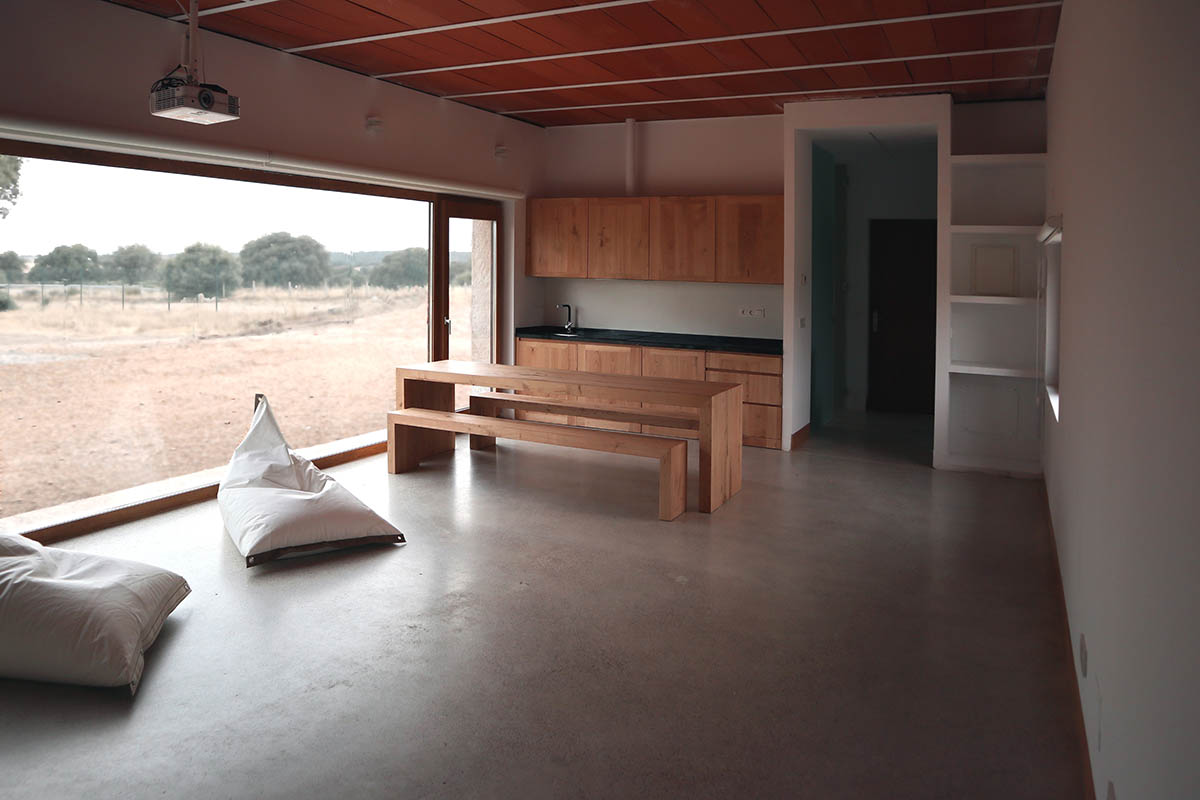 Space is maximized and highly versatile, depending on the intended uses, schedules, and inhabitants. It pays tribute to the #vanlife culture, RVers, and Tiny Houses, where greater space versatility and design ingenuity is required to reflect a more conscious and less consumerist/capitalist lifestyle. “El Refugio” offers a nomadic life, with an exterior of natural grandeur. The vision of "álvaro sánchez de miguel arquitectos" was to create a building on a small scale, but marked by large spaces and interconnections between them. That arrangement favours personal family relationships, both inside and outside, with plenty of detail in that regard, including a natural shower with both internal and external direct access, and with a design simulating an accordion in order to leverage its exterior porch. It is protected from the western sun, but grateful for its partial penetration through well-kept lattice. The porch offers a space for barbecues, as well as a small storage room designed for bicycles, which act as a bridge and shuttlebetween the house and exploration of the surrounding nature. 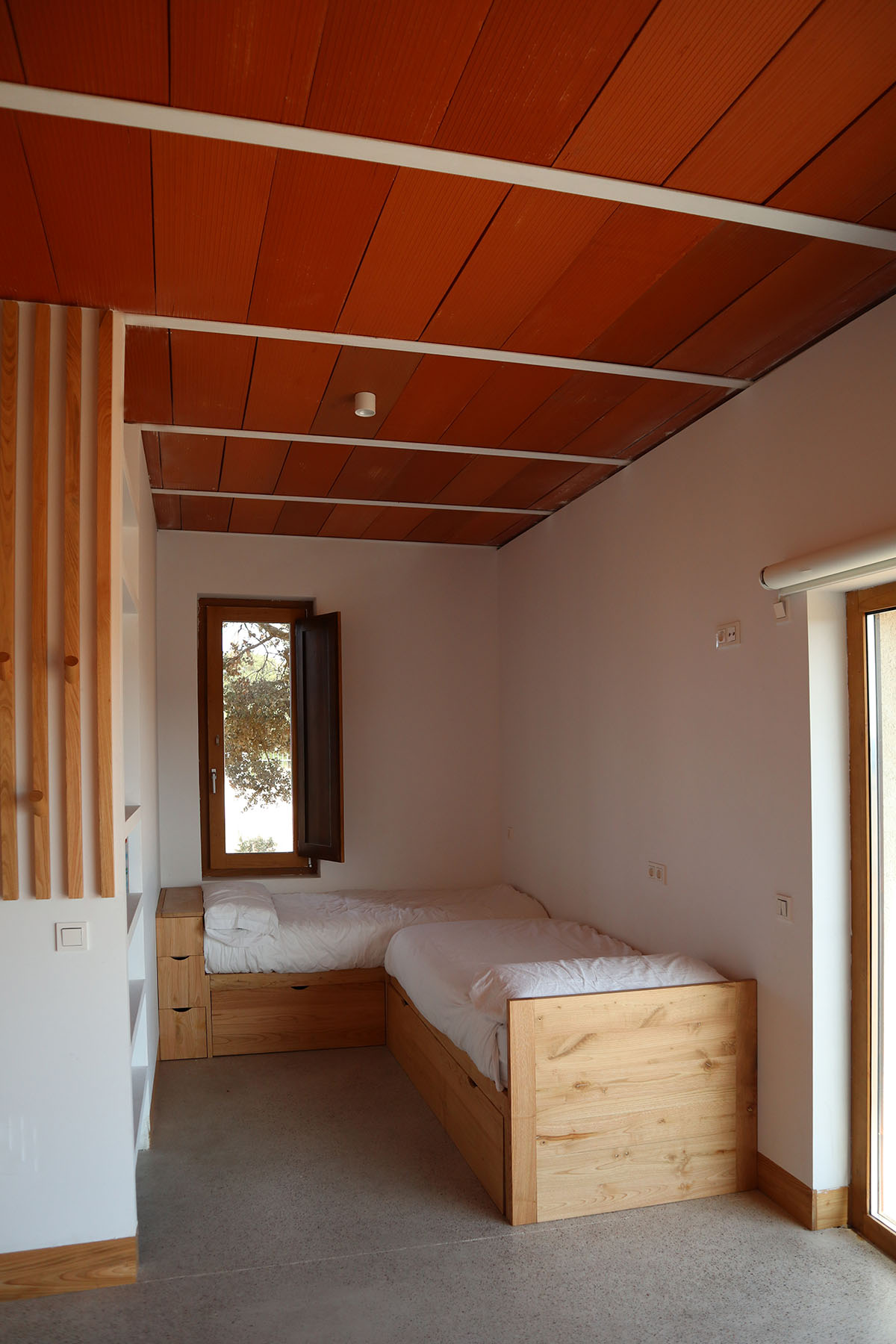 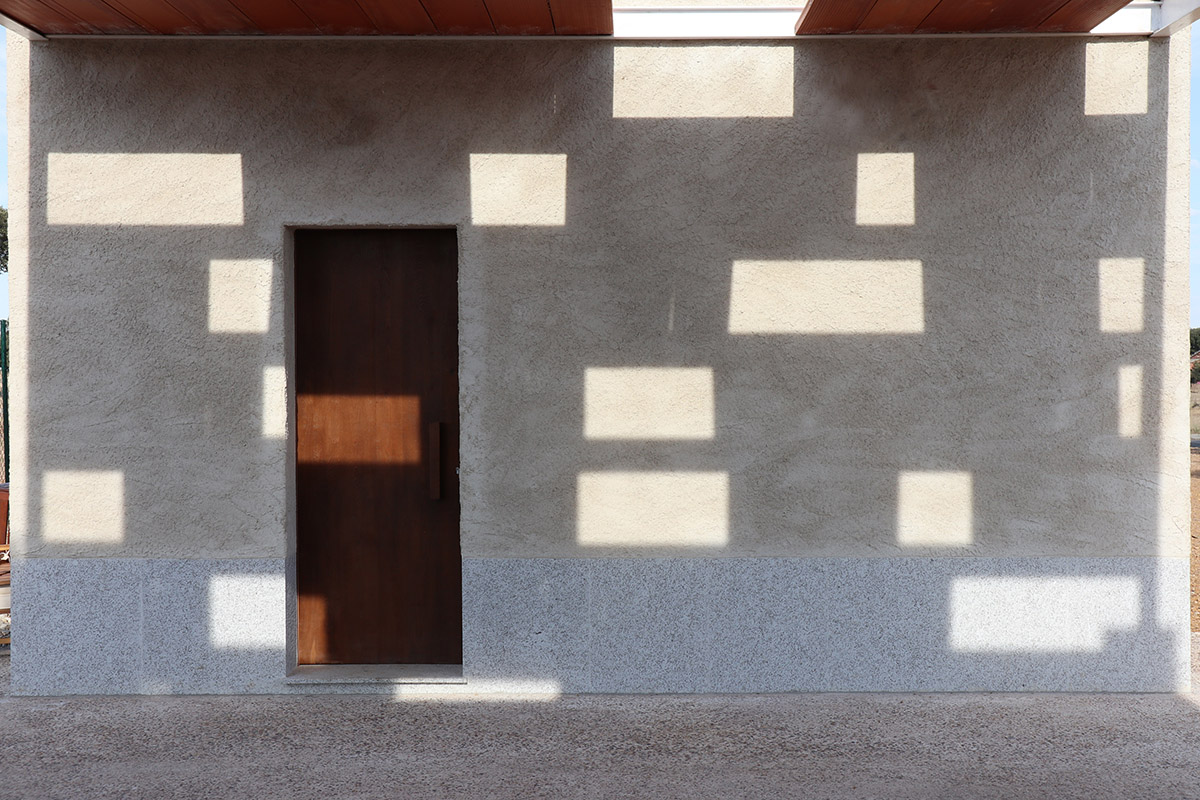 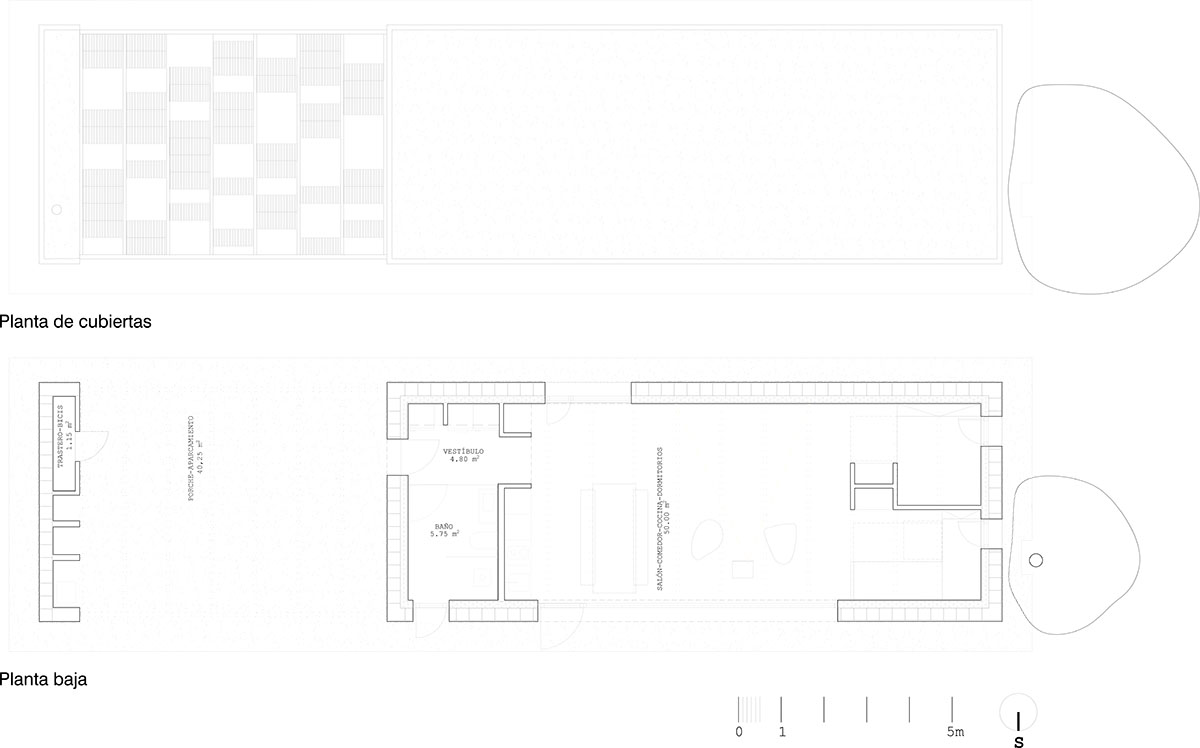 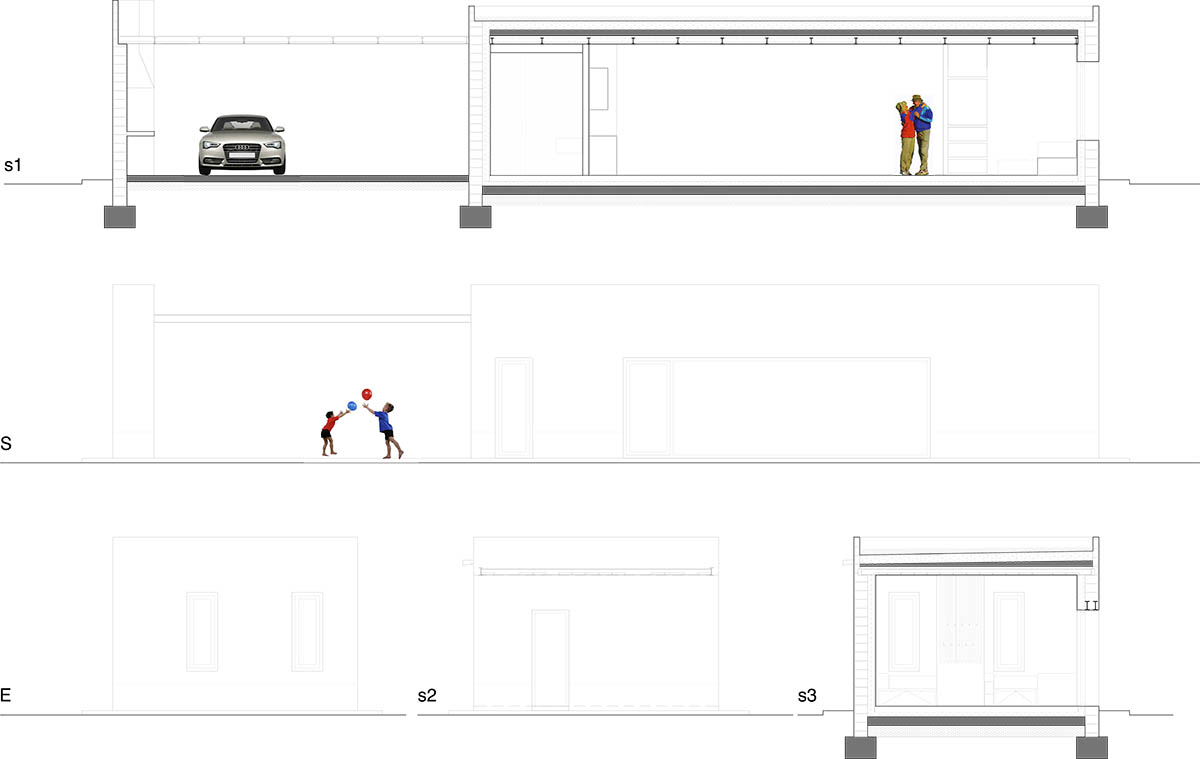